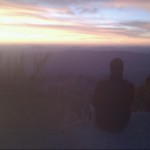 After living and working in Washington D.C. for over 5 years I finally mustered up the courage to leave everything behind, to quit my job, get rid of most of my possessions, say goodbye to friends/family, and go hike the Appalachian Trail.  But why had I made that “radical” decision?  Was it just the natural wanderlust twenty-something people from all over the globe naturally feel?  Or was it something more?

I had been working as a Capitol Hill staffer for the past four years, when I quit my job I was a Legislative Assistant for a Midwestern member of the House of Representatives.  Our American political system seemed to be at a critical turning point, Donald Trump had just been elected (I attended his inauguration as I had President Obama’s in 2012) and it was crystal clear that the American people were more divided than ever.  The protests after Donald Trump’s election demonstrated the feeling in the air surrounding D.C. uncertainty.  But after working on Capitol Hill and experiencing the decadence that permeates the lifestyles of members of Congress, or as I call them “American Nobles”, it was clear our political system was in dire need of a reset, and so was I.

I left to go hike the trail because I wanted to simplify my life and be free, free from the constraints and obligations of modern society, but in a way it would also serve as a sort of penance for my previous life in our nation’s capitol.  I had been contemplating different diagnoses and thinking of different remedies to cure our democracy from the diseases that ailed her when it became clear that I needed a new perspective.  I wanted to experience America as our founding fathers had, a vast wilderness filled with beauty, wonder, and bountiful resources.  An America largely untouched by mankind with thousands of possibilities and opportunities; a blank canvas yet to be painted, and so I left to rediscover America, to honor America, and complete a uniquely American pilgrimage.

28, pursuing the life I want to live.