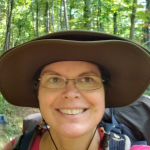 Sightings on the Trail – Northern Edition

I have been back on the trail for almost 2 weeks now, going south this time. As I hike through this new territory, I find myself reflecting on the great differences in flora and fauna in each section. In this post, I will share pictures and stories of my encounters with various animals from the northern half of the trail. Full disclosure, this post has loads more pictures than I usually include. (The narrative is also longer.)

Just a note for those concerned: I allow animals their space. I talk to them calmly, and thank them for sharing their forest and allowing me to take their picture. The rare occasions that I pick up an eft or toad, I gently place them safely back in their habitat and use hand sanitizer immediately afterwards. My photos are zoomed in to appear closer than I am in any actual situation. I also know what to do if an animal becomes dangerous.

If you’re looking for stories more than pictures, scoot down to the mammals. I think I have some good ones from those encounters! 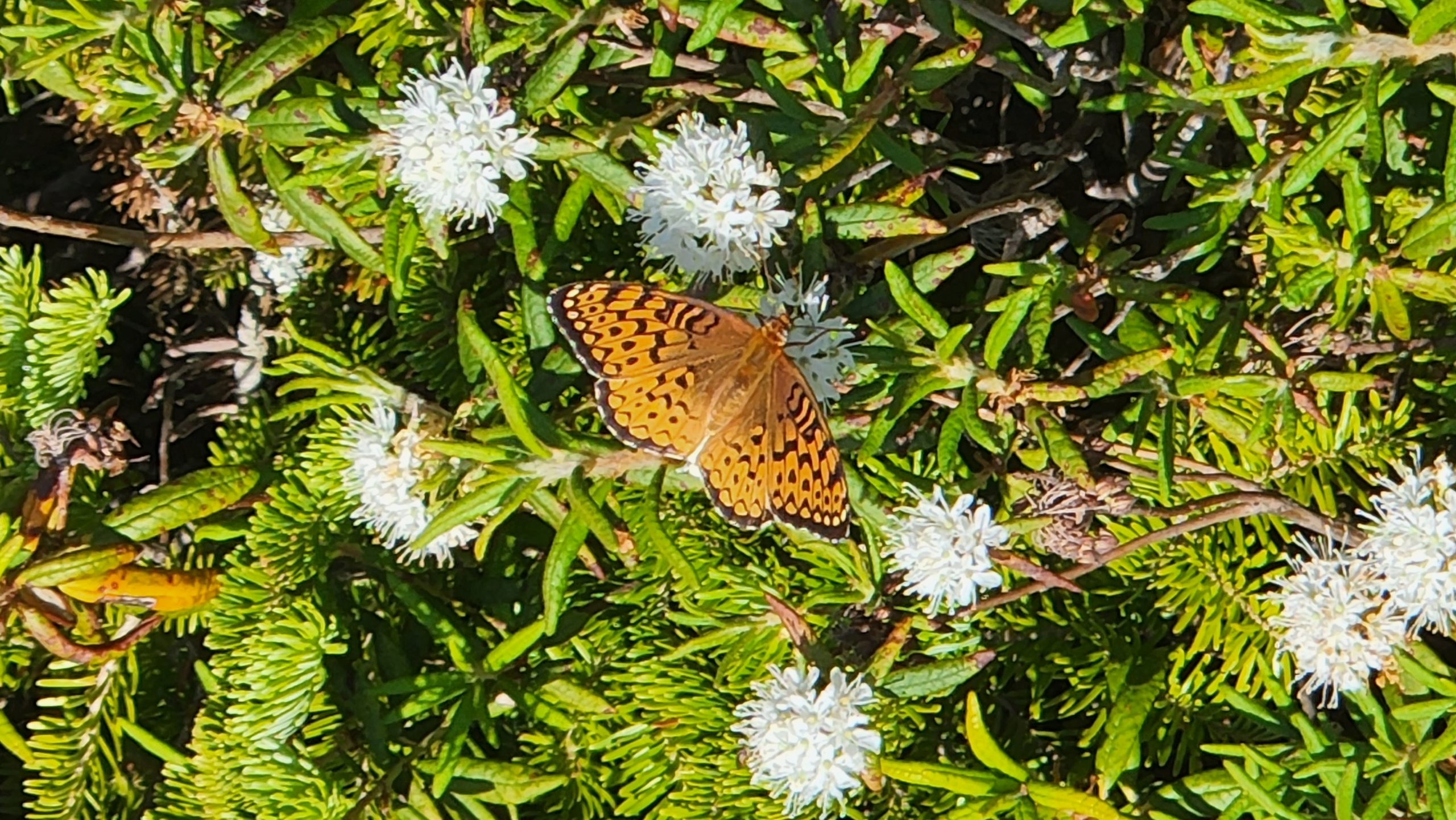 I think the bugs are the most commonly ignored or overlooked animals on the trail. Whenever hikers share stories or pictures of the animals we see on trail, we often focus on the larger or less common animals. You know, like bears or beavers. I tend to take pictures of all manner of living creatures. So, I will start with the smallest creatures – the creepy crawlies. To be fair, the most common bugs I take pictures of are butterflies and dragonflies. I do have a few others I found interesting, though.

Other than the butterflies, the other bugs in these pictures were unique in their coloring. I hadn’t seen any like them before. The deep teal beetle was in Connecticut. I found the interesting red beetle that looks a bit like a firefly in the White Mountains.  The red dragonfly was in the Hundred Mile Wilderness in Maine. I saw these butterflies in several locations along the northern portion, though. 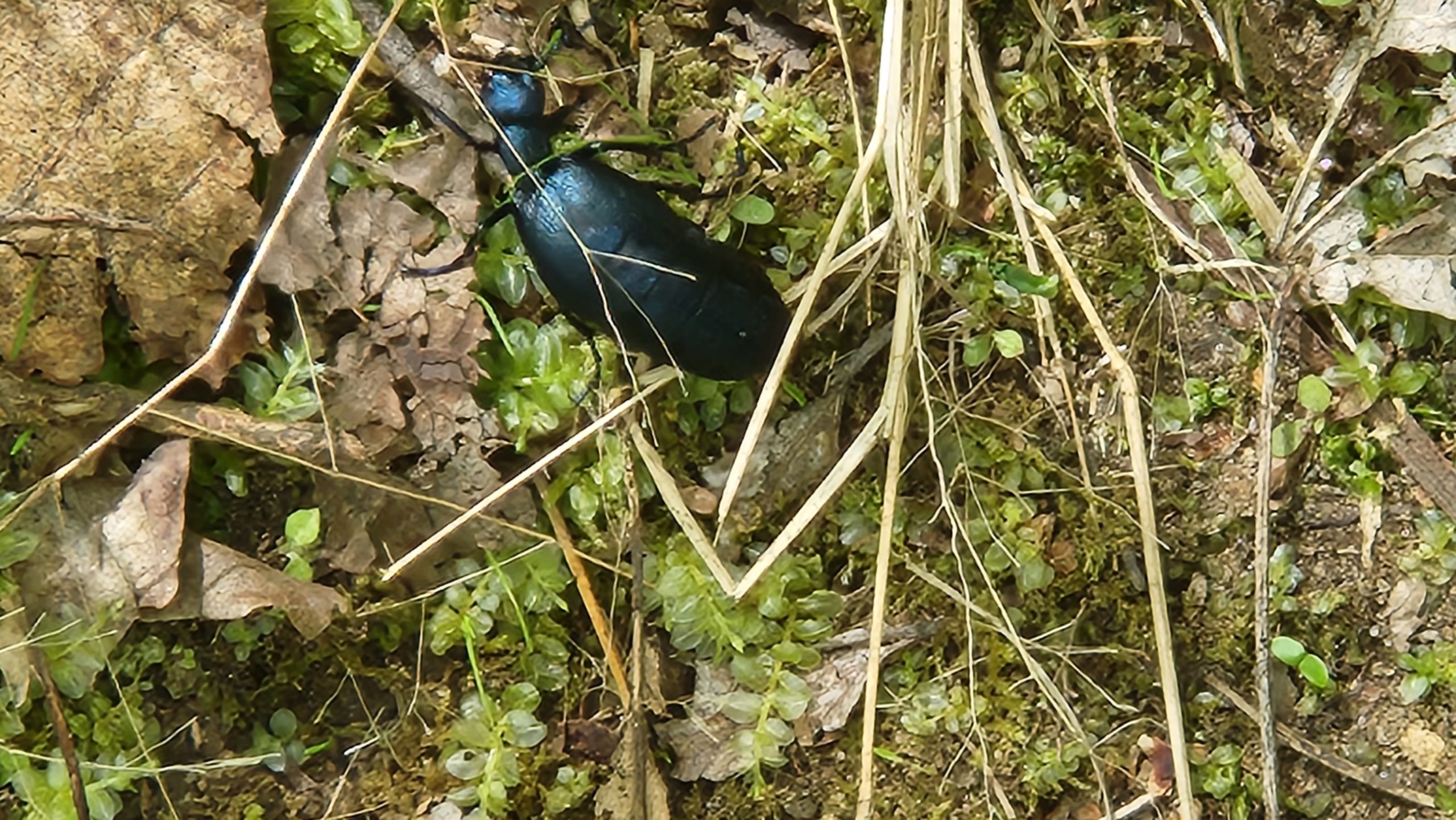 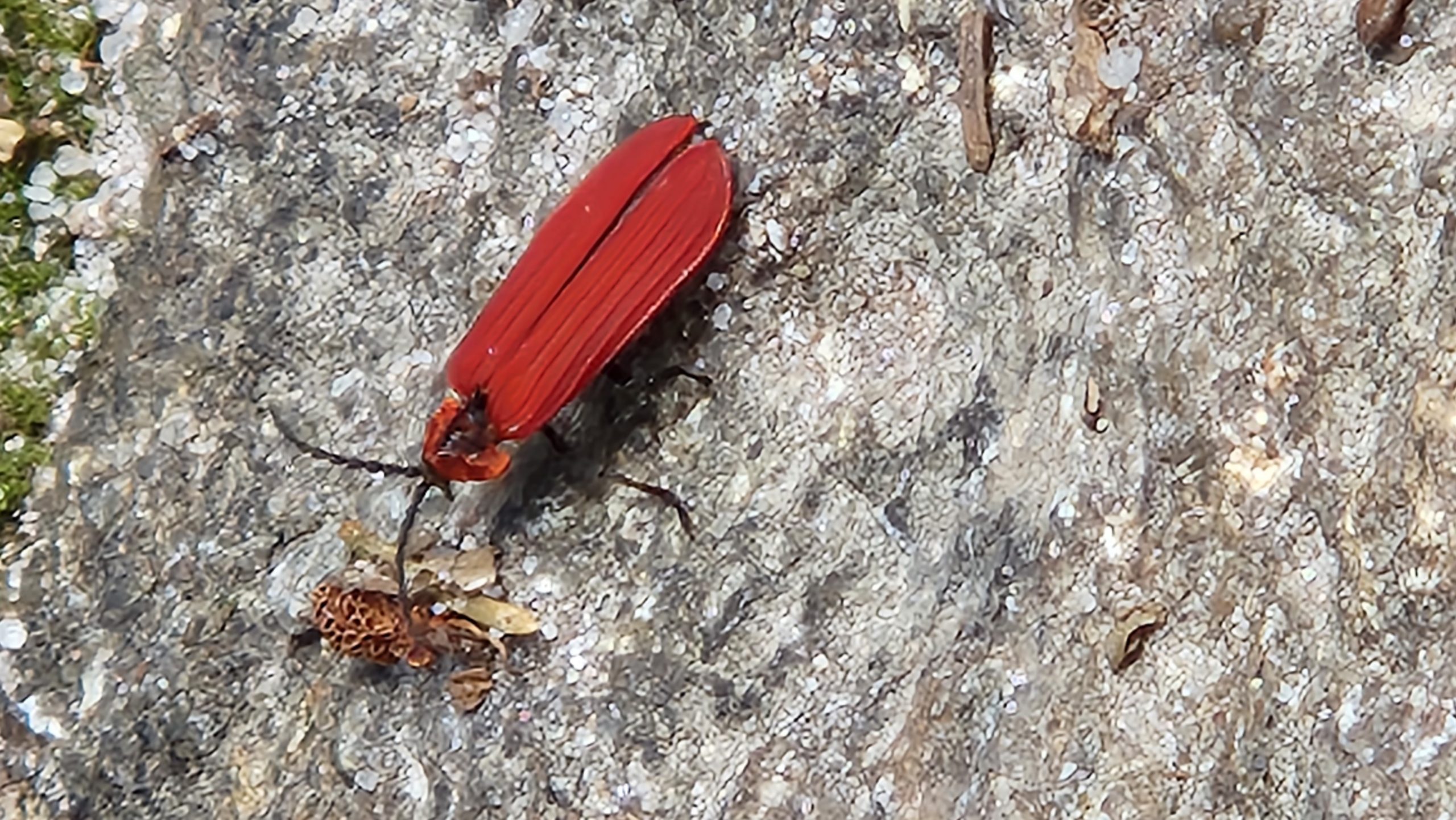 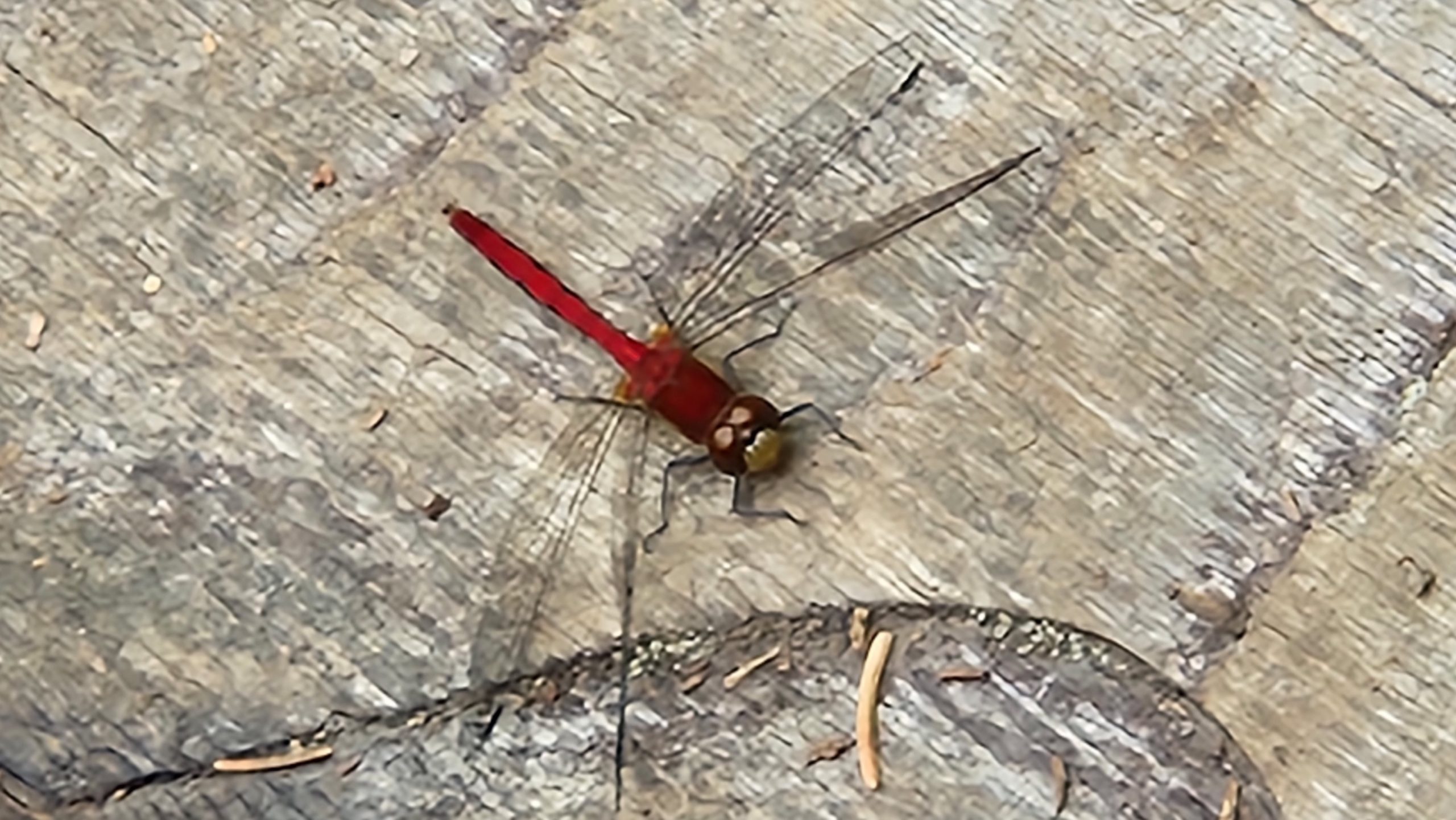 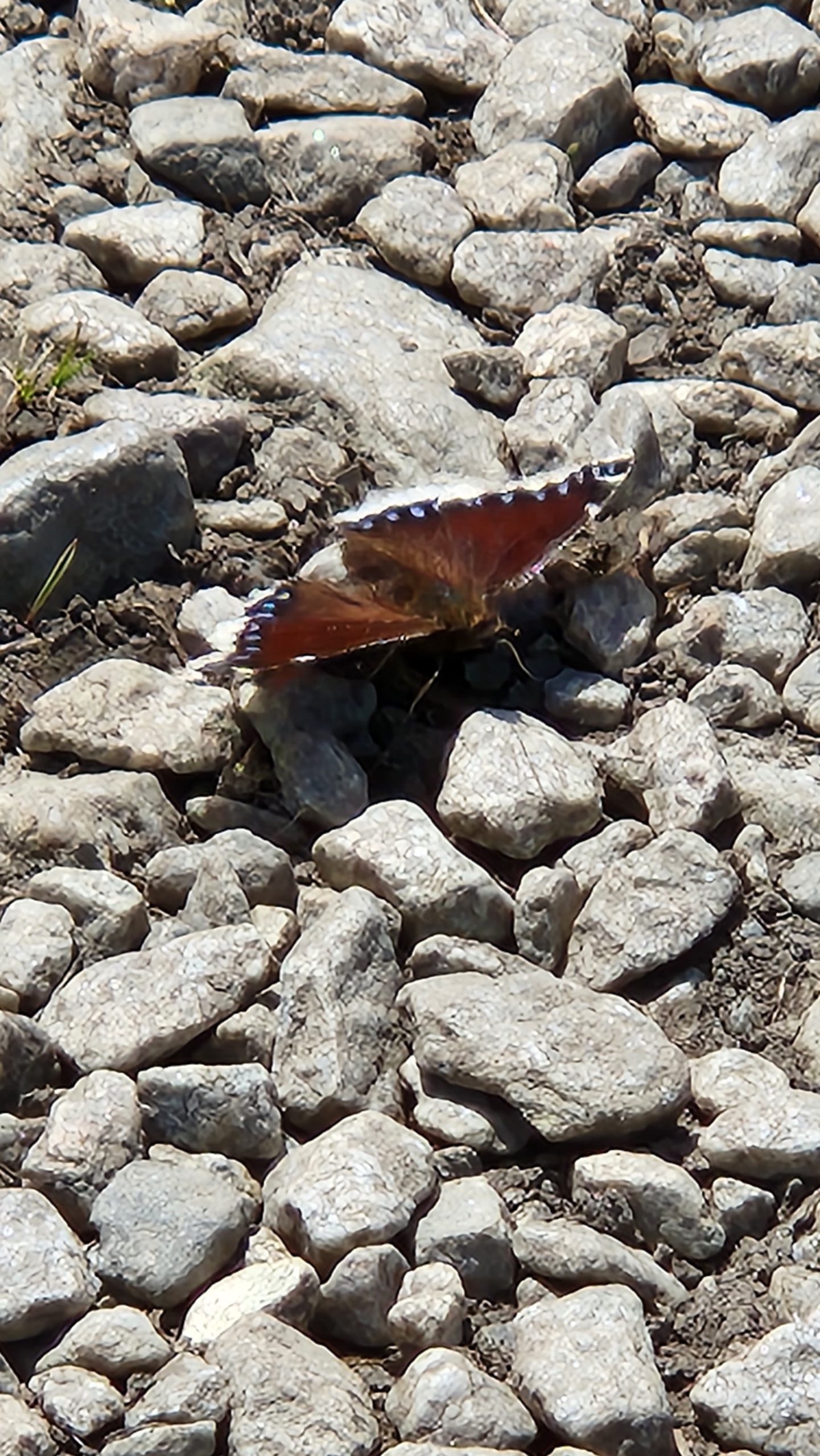 I don’t wear headphones when I hike. I feel that they take me away from nature, and one of the reasons I’m on trail is to immerse myself in nature. I love everything about the trail. Without headphones, the songbirds are my music. I notice the different songs from different parts of the trail, as well as the few times that I don’t hear any songbirds at all. Those are rather eerie times.

Songbirds are difficult for me to take pictures of because they flit around so quickly or blend into the forest well enough that I can’t find who is singing. I did manage a few, though.

I saw the scarlet tanager in Massachusetts. It was a big surprise! I’ve always loved these birds but had never seen one in the wild. I saw red-winged blackbirds throughout many states. My pictures are not completely focused, though. My apologies. 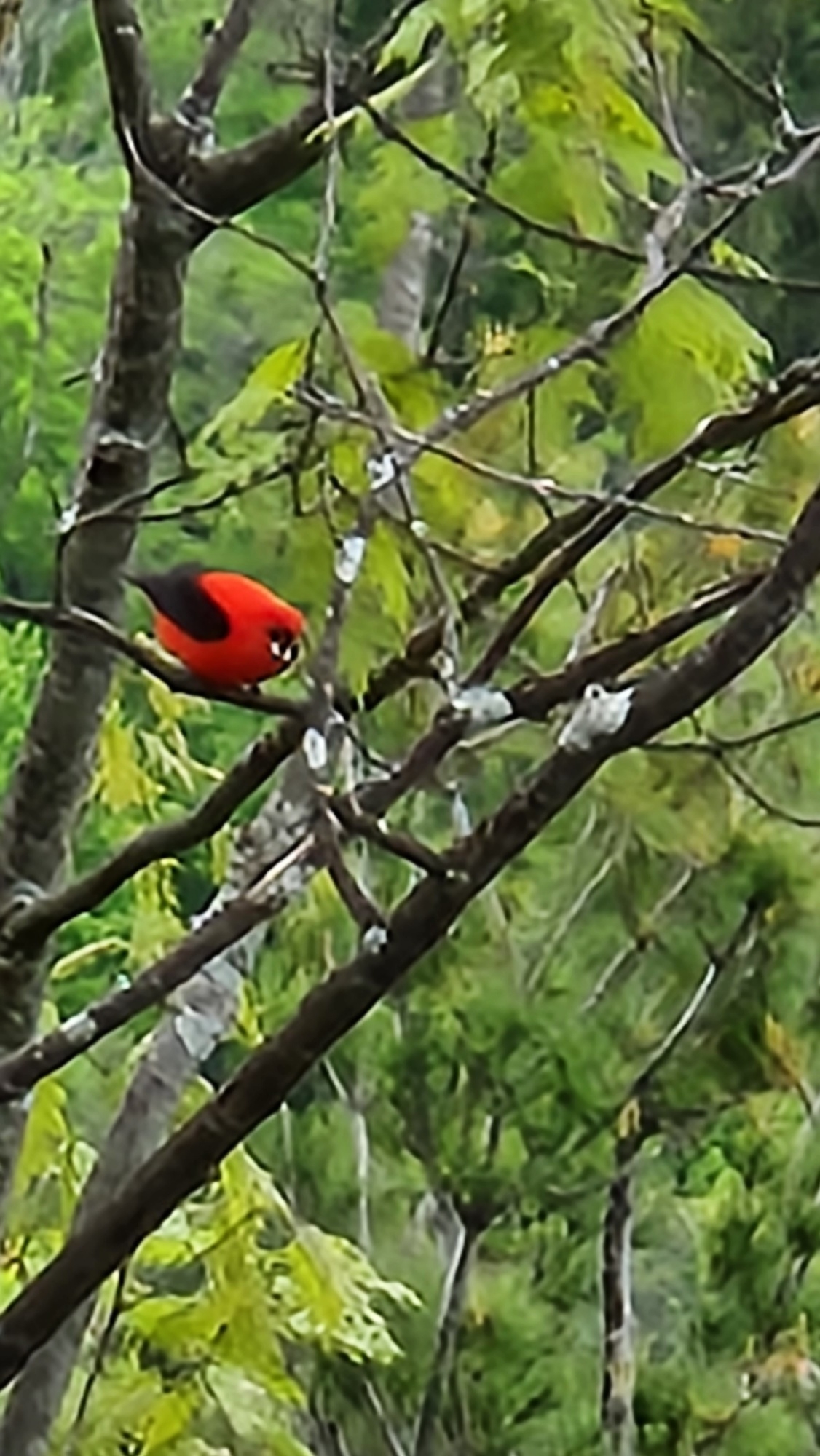 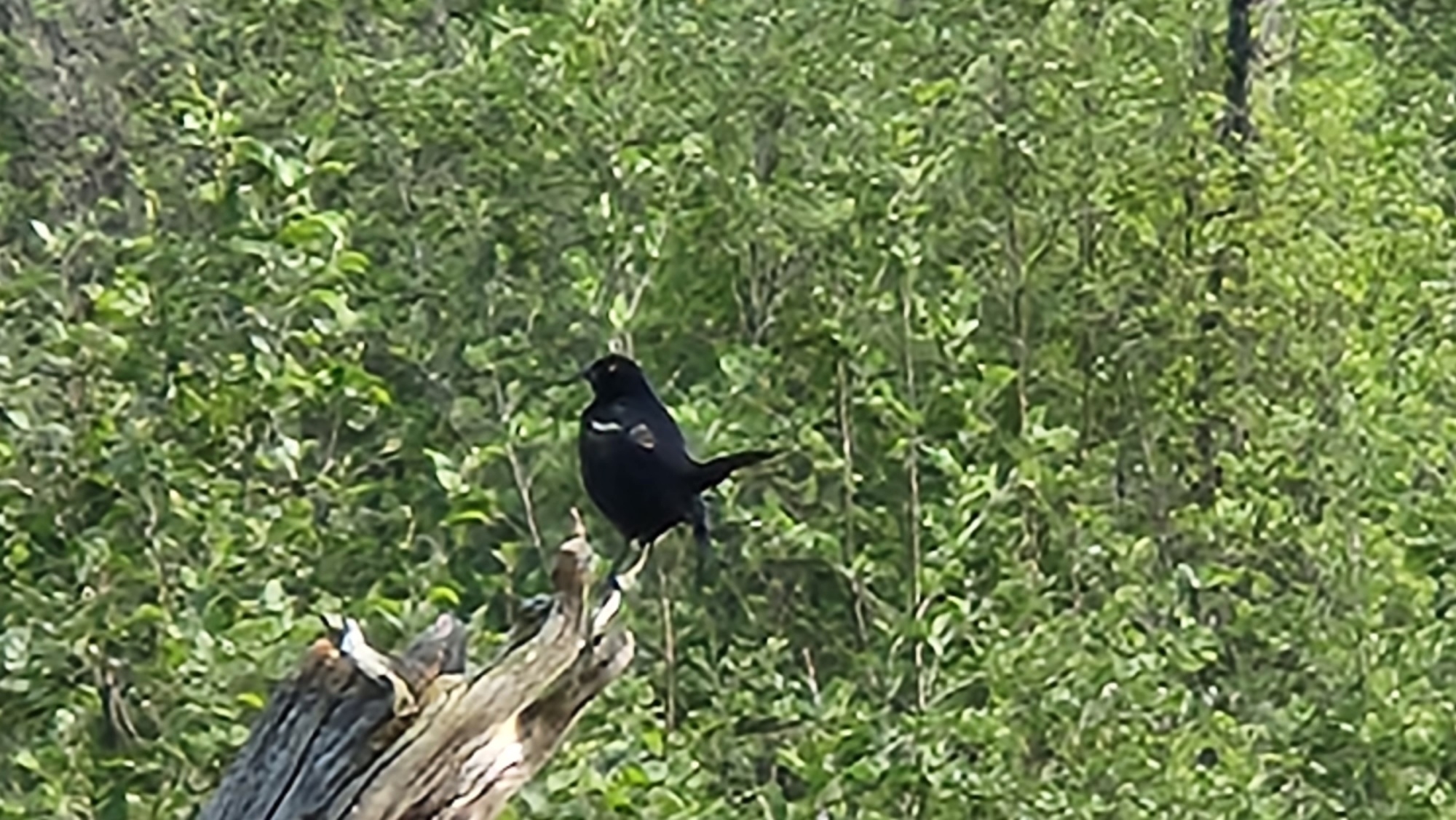 I was surprised that I hadn’t seen any water birds before I got to Maine. Then, within those weeks, I saw and heard loons several times. I also saw two sets of ducks – both times ducklings swimming with their momma duck. 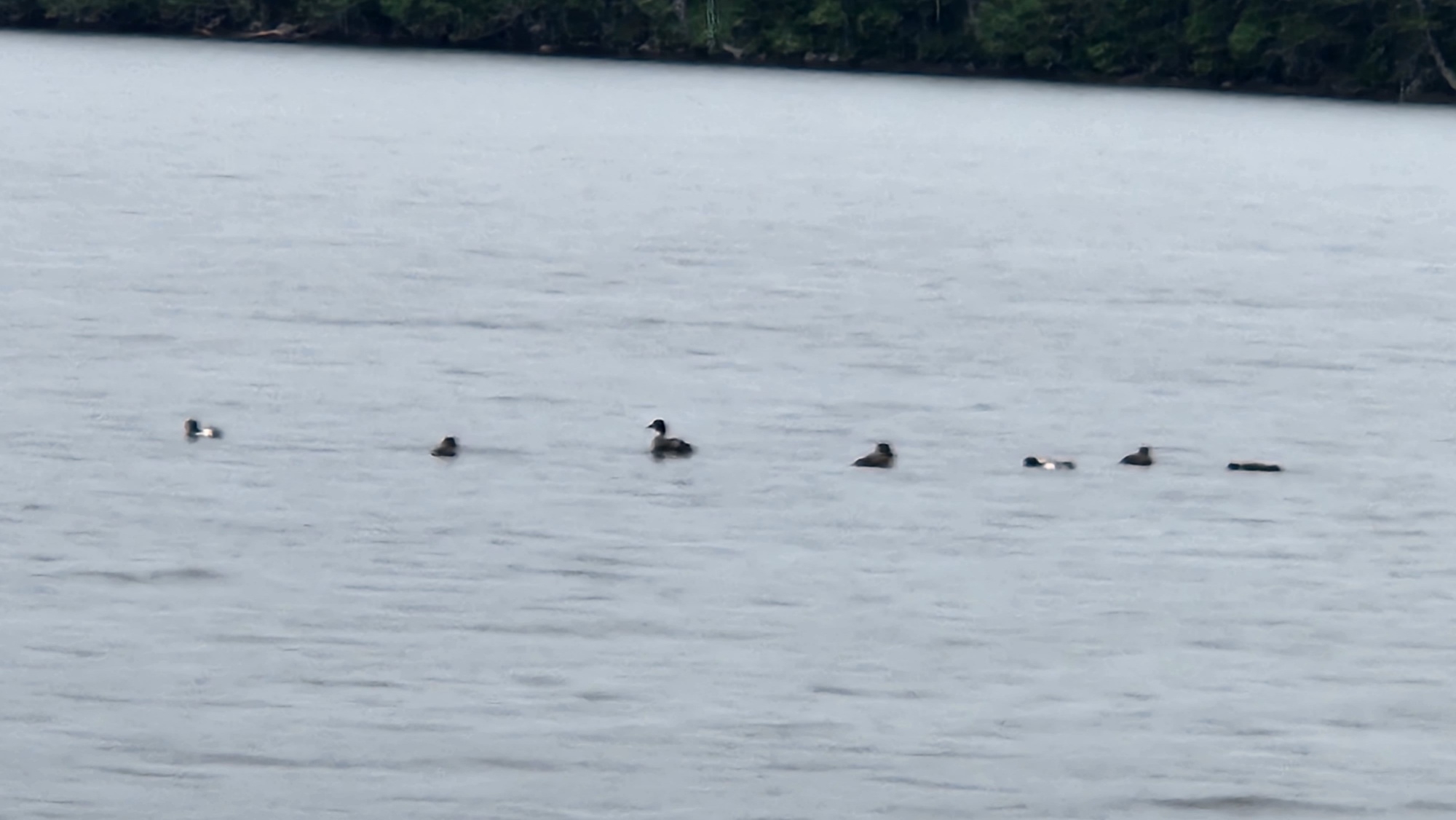 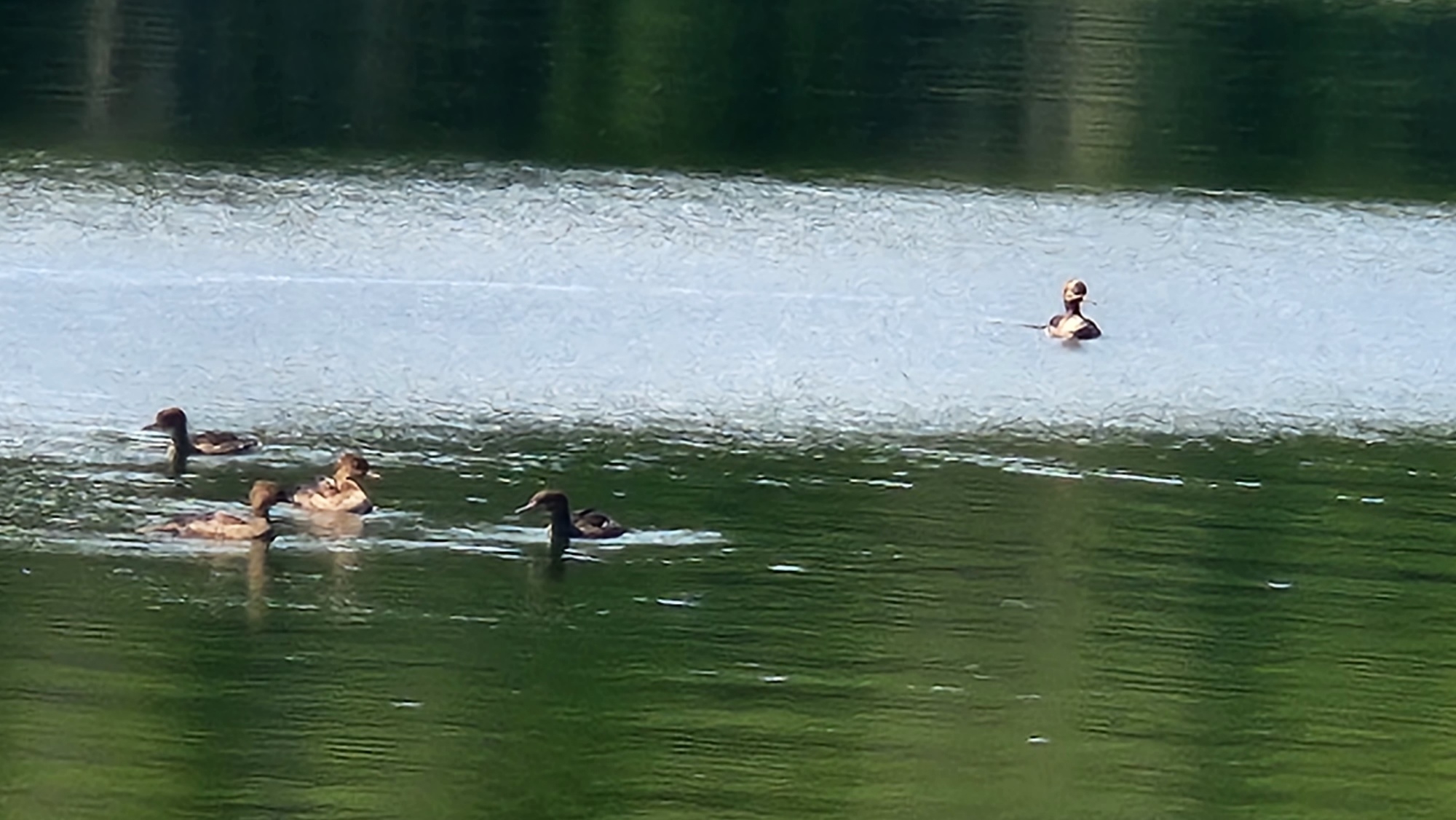 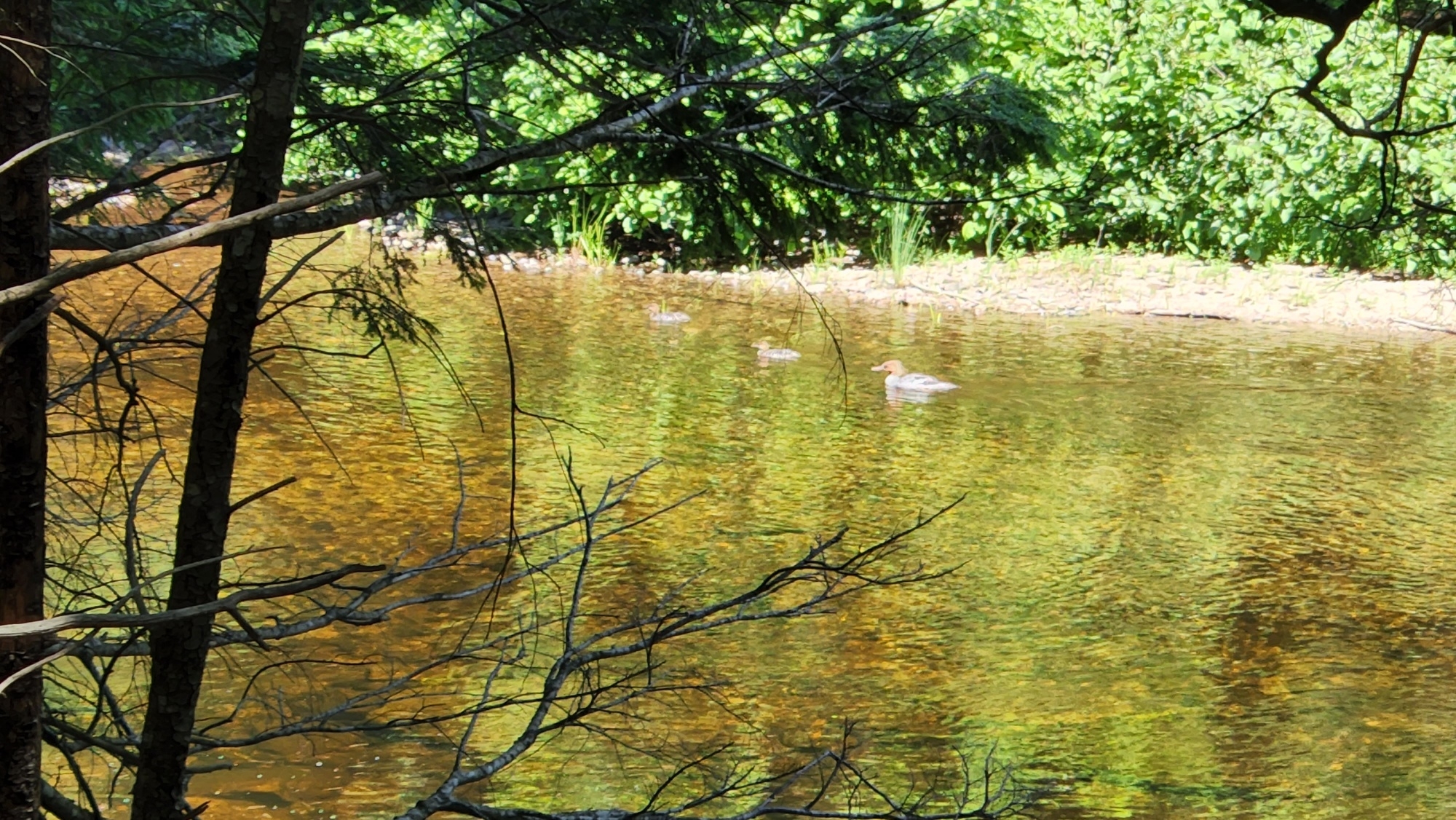 One day in the Hundred Mile Wilderness, I had stopped to check my location on my phone. Another hiker passed me at the time as I finished with my phone. He was hiking fairly quickly, and when I looked up, he was gone. Instead, I saw this game bird. I don’t know much about game birds, but I think this is some type of grouse. It slowly walked right in front of me, about 15 feet away! I don’t think it realized I was there. This was the only game bird I saw in the northern portion. 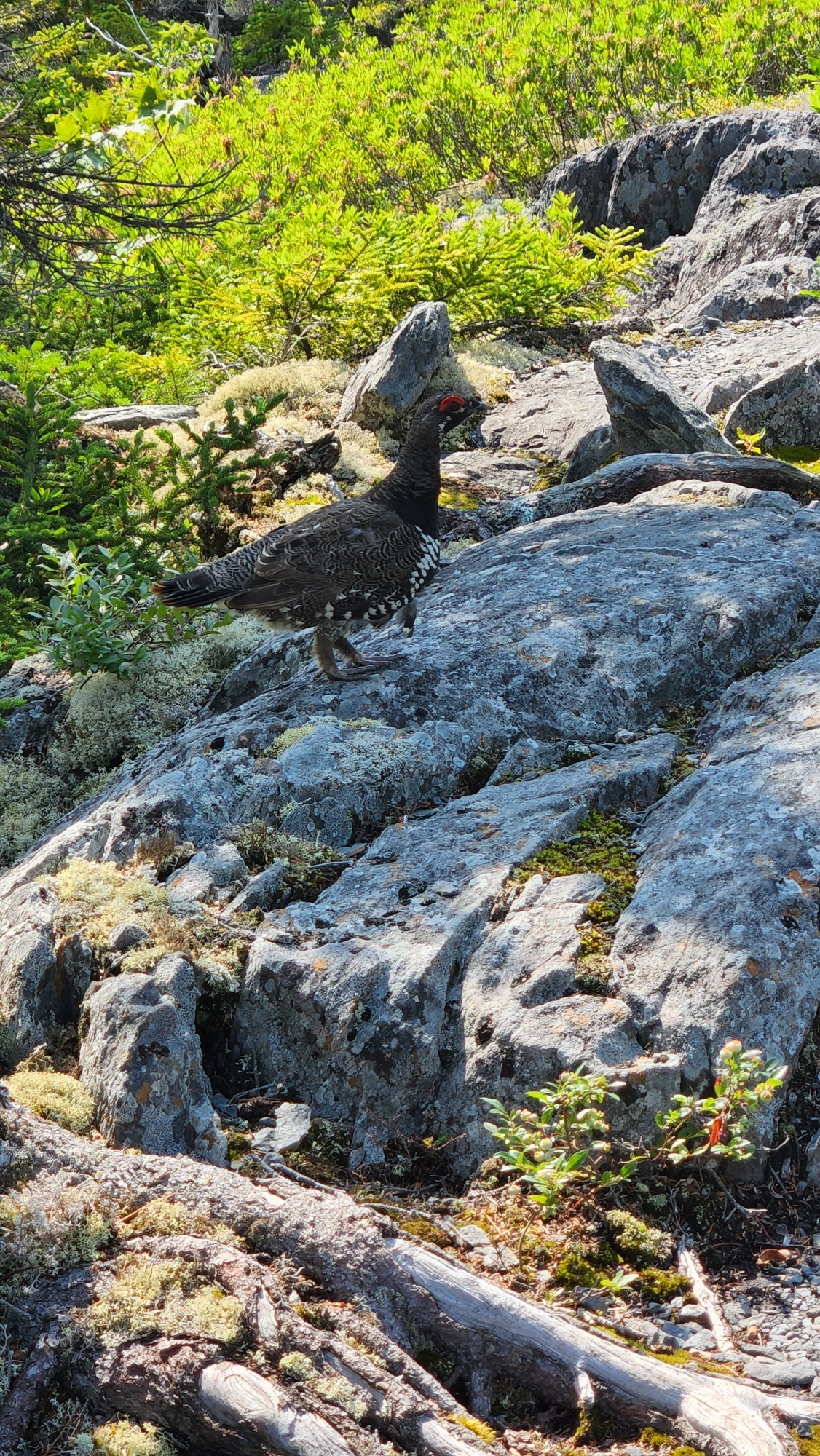 I think, other than mosquitos and gnats, the most common animal I saw in the north was the toad. Mostly the same colors, but all different sizes. From as small as my pinky nail to as large as my palm. So many that I had to make myself stop taking pictures of all of them because it was slowing me down so much! The red efts were almost as prevalent. They seemed to be in the middle of the trail, especially in Massachusetts. I had to stop myself from trying to move all of them off the trail. I did, however, tell each of them to move before they were squished by other hikers!

I didn’t see as many frogs, but enough to keep me happy. I really like frogs. And I only saw one full-grown salamander. It was on Mt. Garfield at the end of that really long, hard hike over Franconia Ridge in the White Mountains. So that was a nice surprise at the end of challenging day. 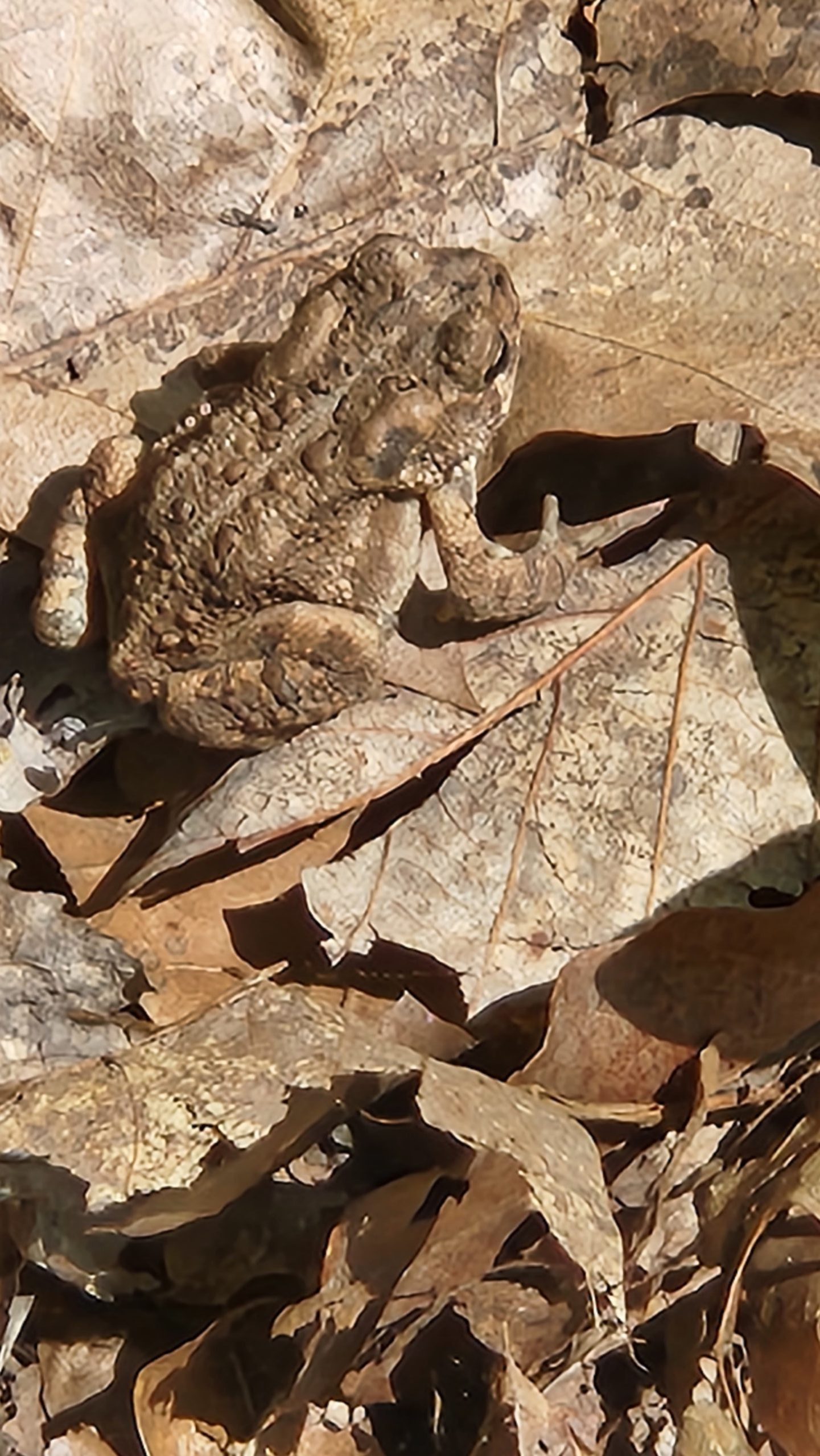 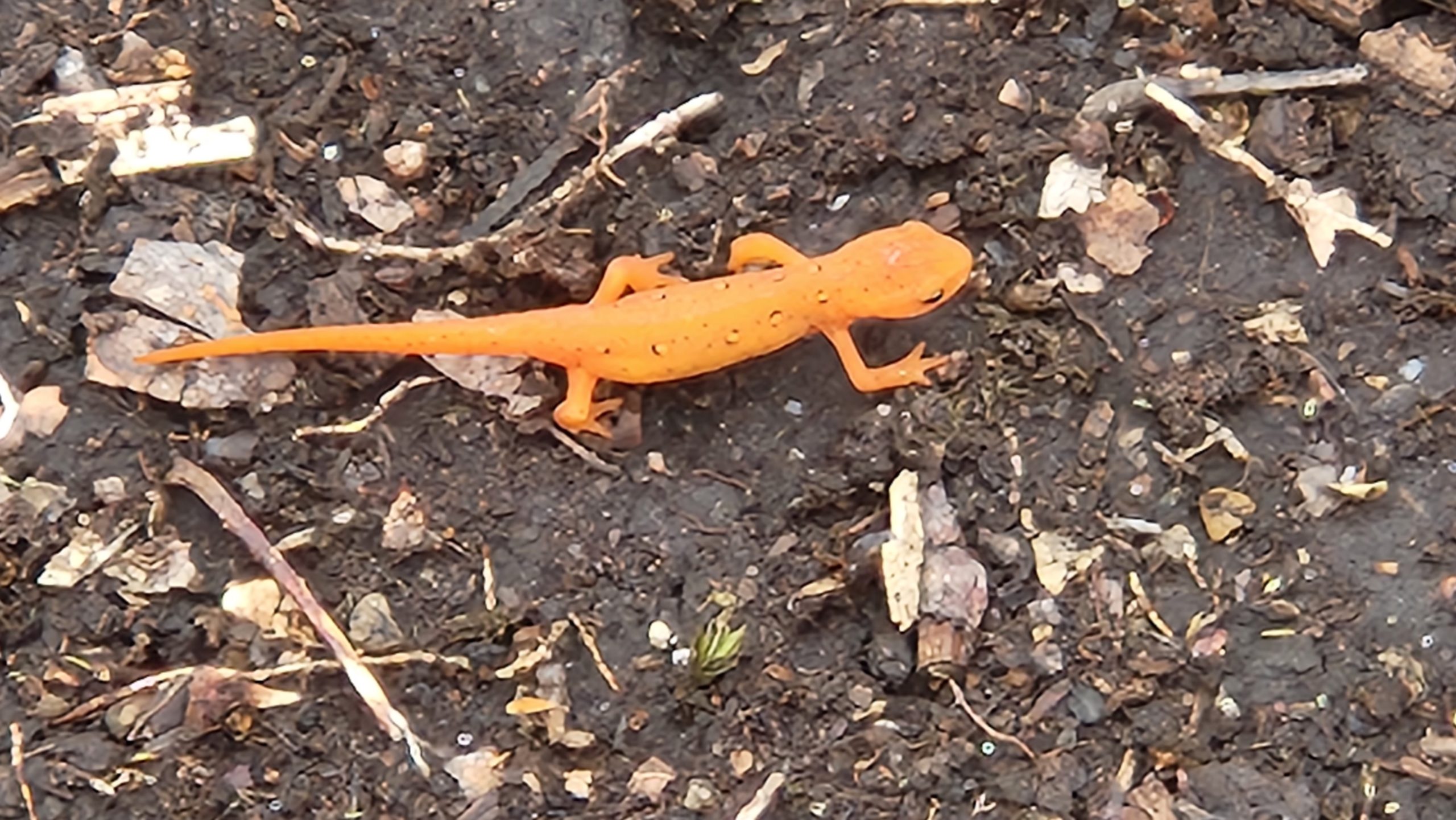 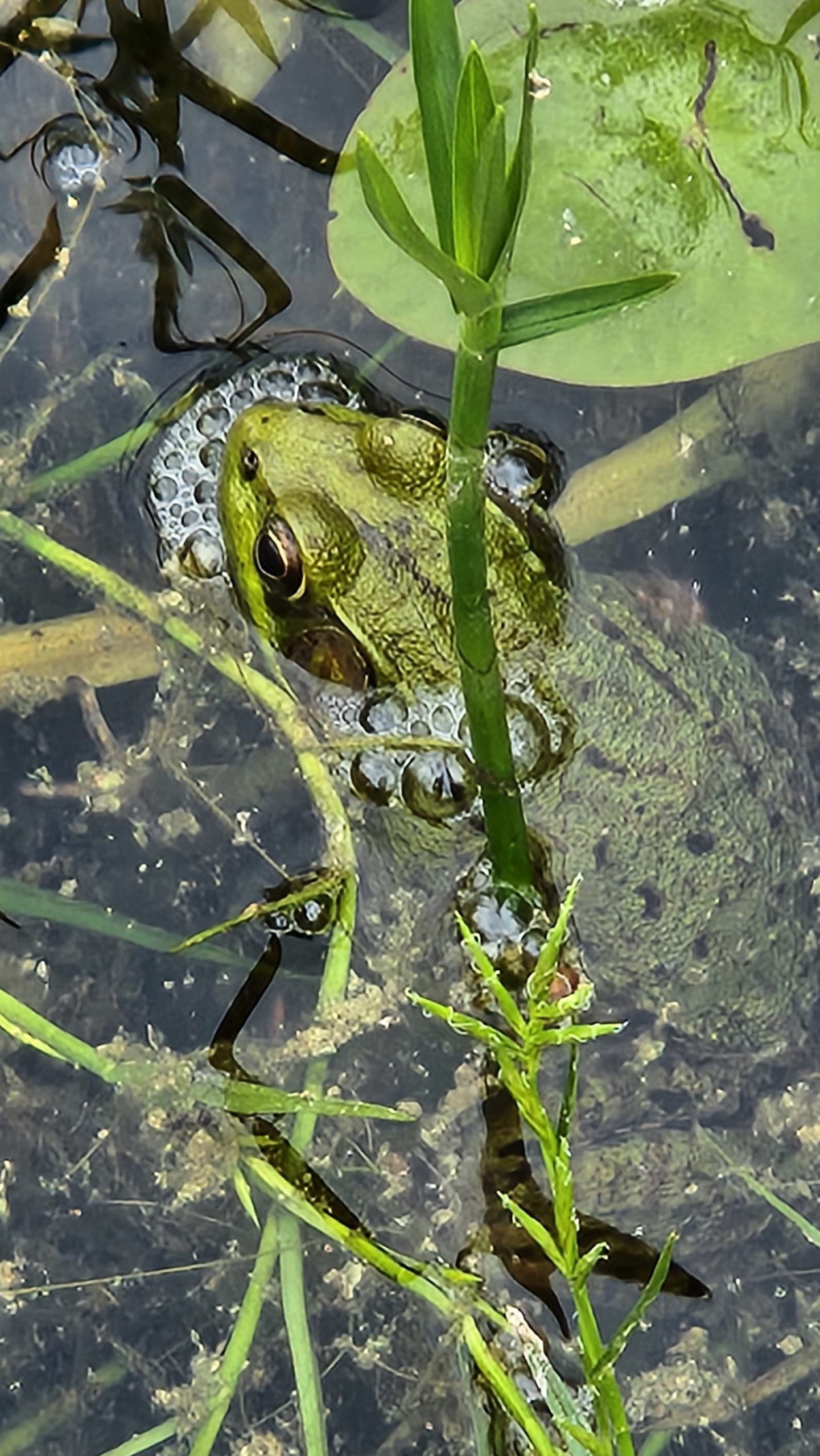 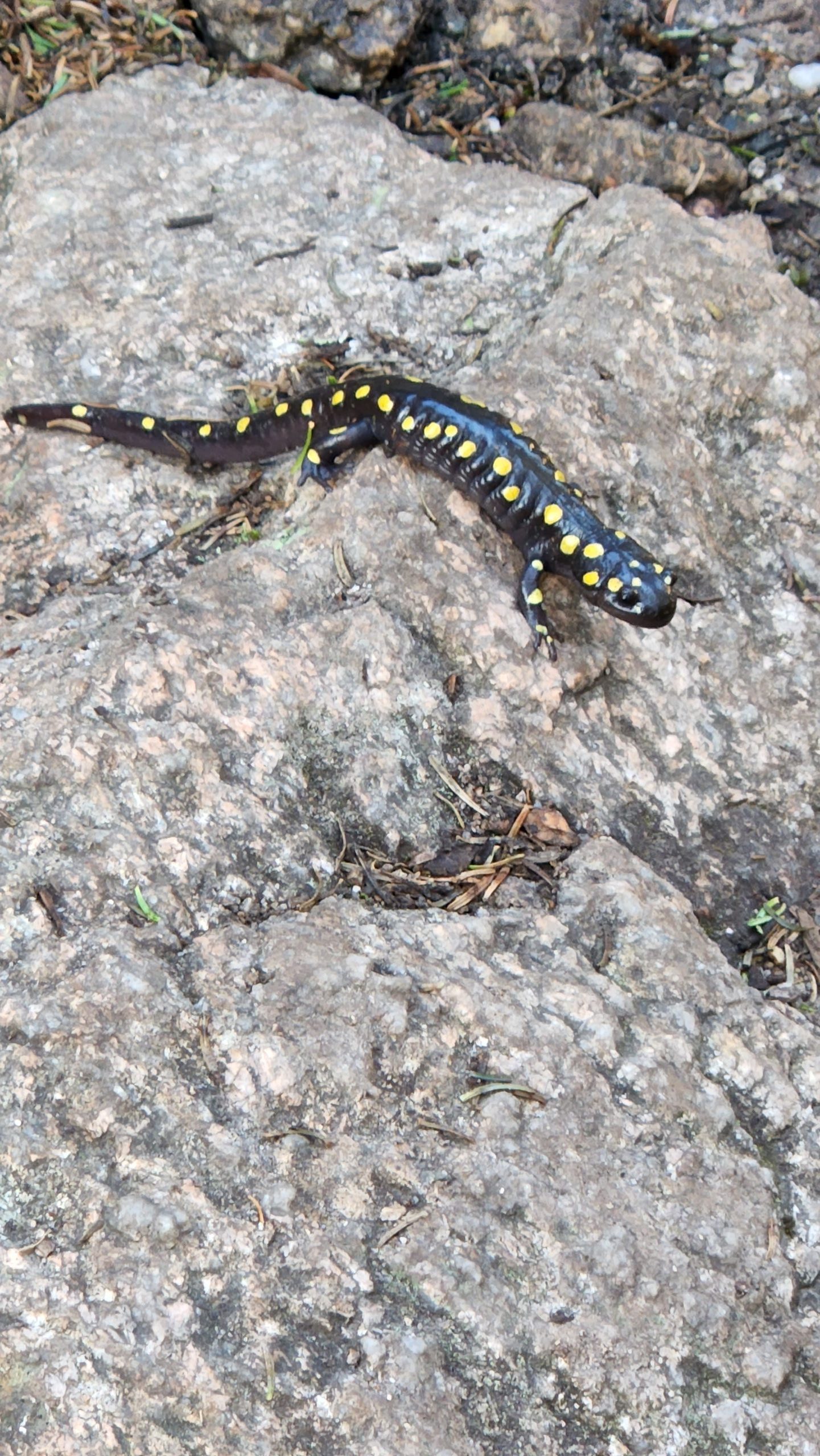 OK. I know that this heading isn’t the same classification level as the rest of the animal groups, but the only reptiles I saw up north were snakes. And they were fairly frequent, with the exception of the White Mountains. I figure it is too cold for them, but I’m not a herpetologist. Fortunately, I did not see any venomous snakes in the north. Not many stories here, either, but some interesting pictures.

Of course, I most frequently sighted garter snakes, but black snakes were pretty common, too. Garter snakes seemed to slither off trail as soon as they felt the vibrations from my poles. The garter pictured here looks like it just enjoyed dinner along the NY/CT line. I saw many toads the size of the belly bulge in that area. Black snakes didn’t care about me and were often stretched straight across the trail with no interest in even moving for me. I saw the interesting ring-necked snake in New York. 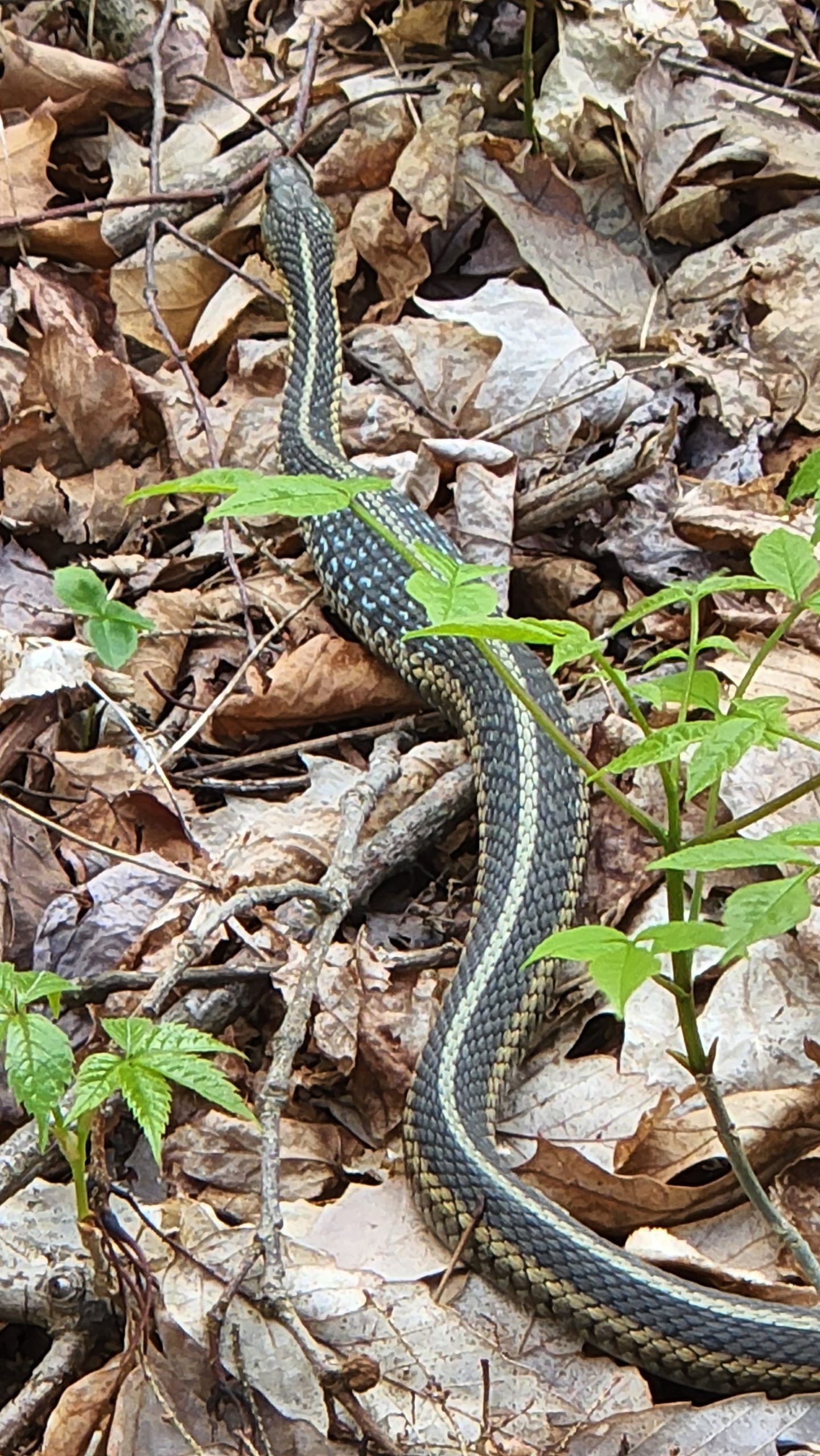 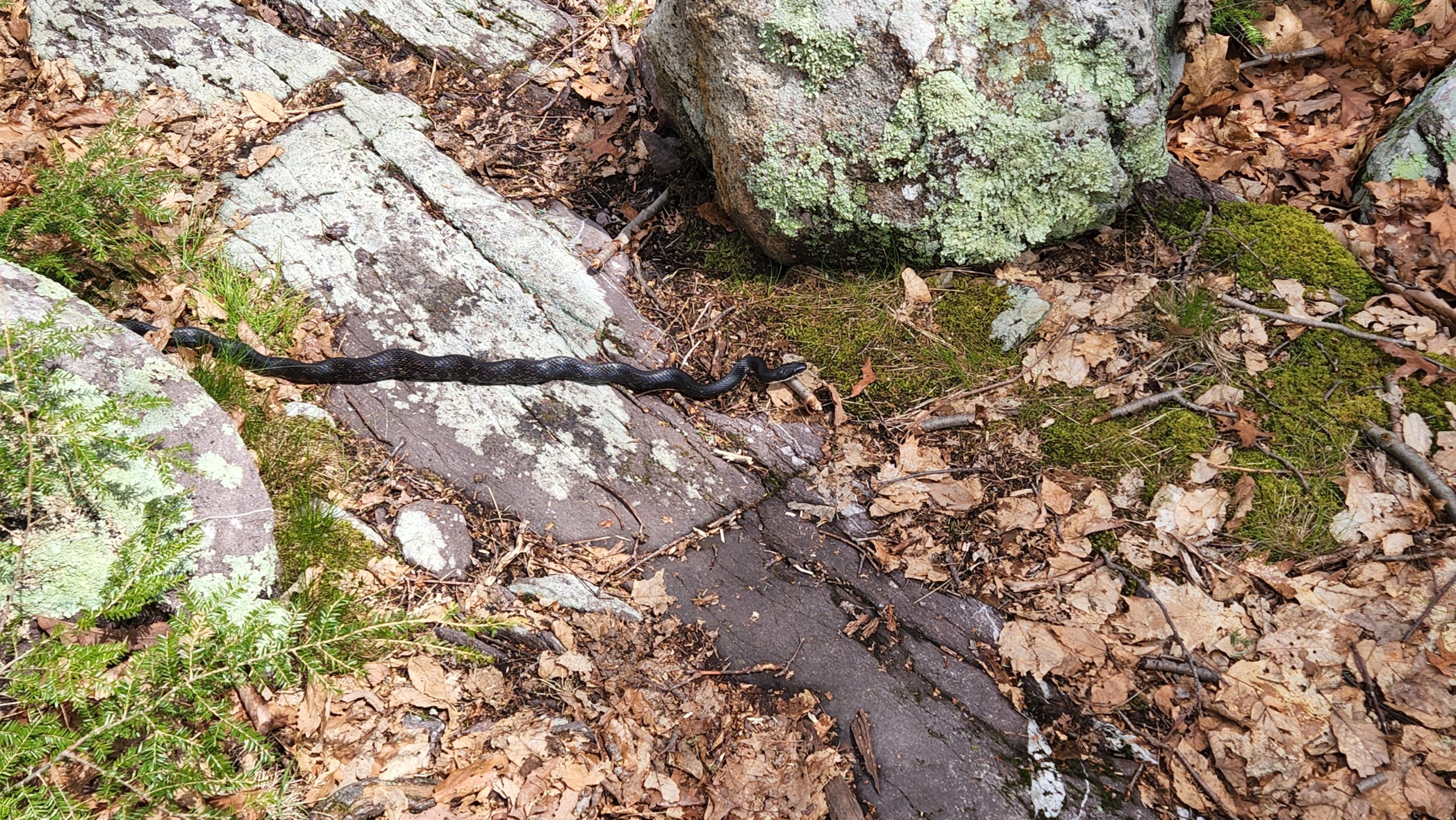 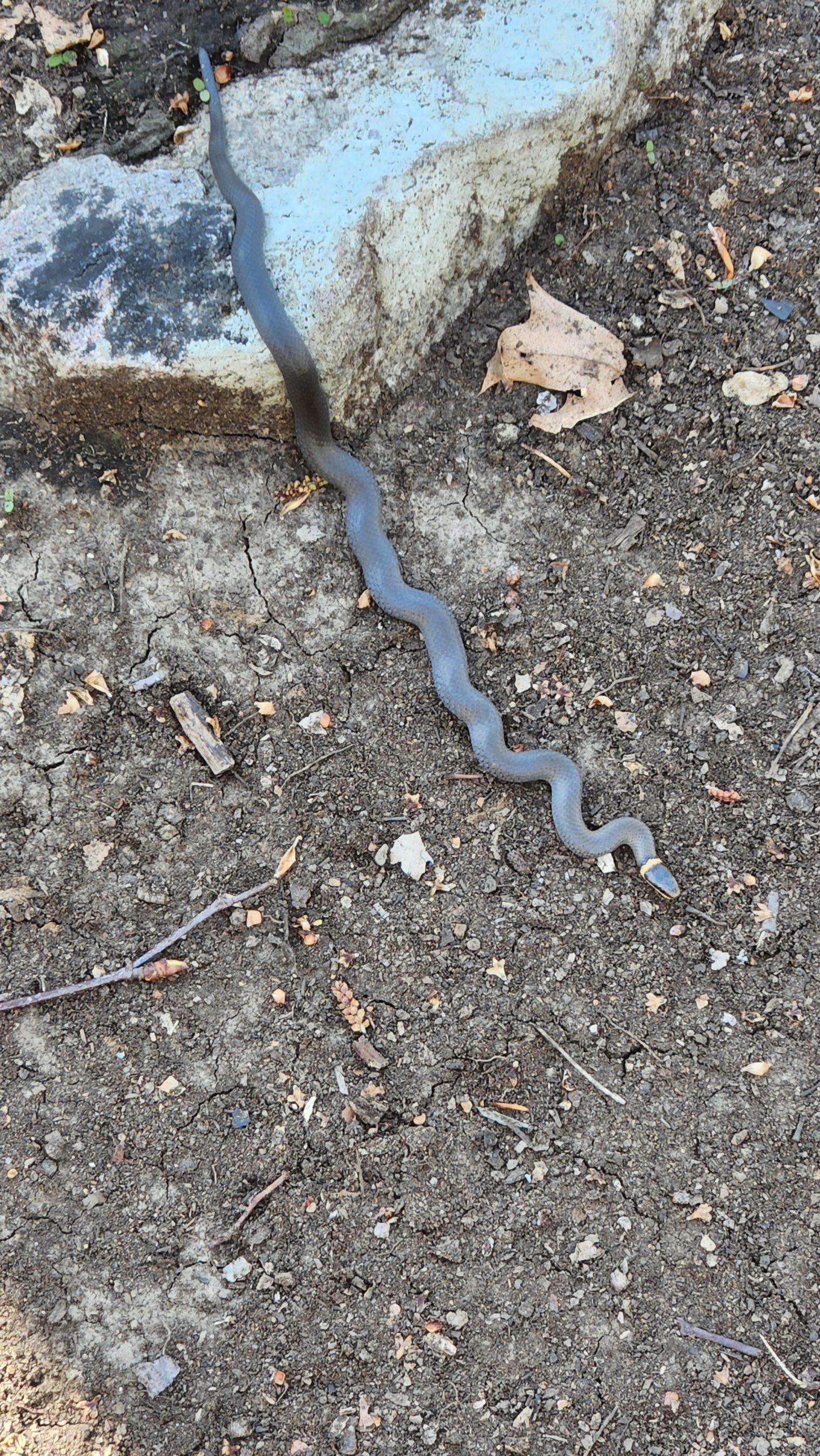 So, I got to see mammals of different sizes and species all through the northern part of the trail. The common gray, and later, red squirrels were everwhere. Chipmunks were entertaining and ubiquitous. I saw a few mice in shelters, of course. As expected, I saw many deer until Vermont. I saw a few bears in New Jersey. The big surprise mammal for me was the porcupine! I didn’t expect to see as many as I had.

I promised stories in the mammal section, so here goes. I don’t have pictures to go with all of them. Some of these pictures are about the same animal, just not from the time of the story.

Chipmunks are so funny. When I was on the blue blaze to Goose Pond Cabin in Massachusetts, I surprised a pair of chipmunks. They both ran off as soon as they saw me. One immediately got into a hole under a tree about 10 feet away. The second was following his buddy, but stumbled as he ran. I saw him tumble head over heels and then sit up, literally shake it off, and then continue running off to meet his buddy. The chipmunk pic is from a random chipmunk that froze hoping I didn’t see it. 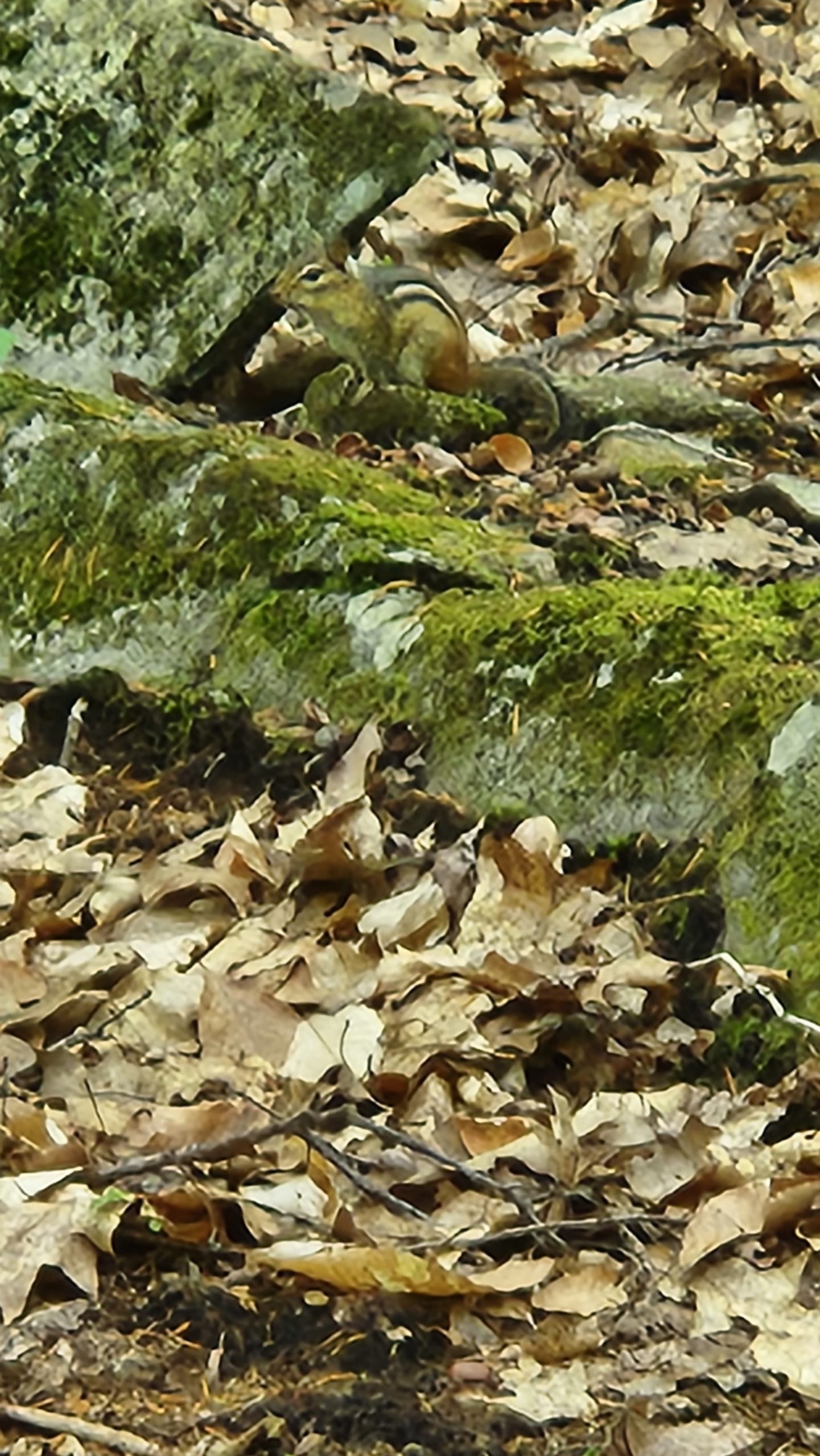 No fun stories for these common mammals. Just a picture. 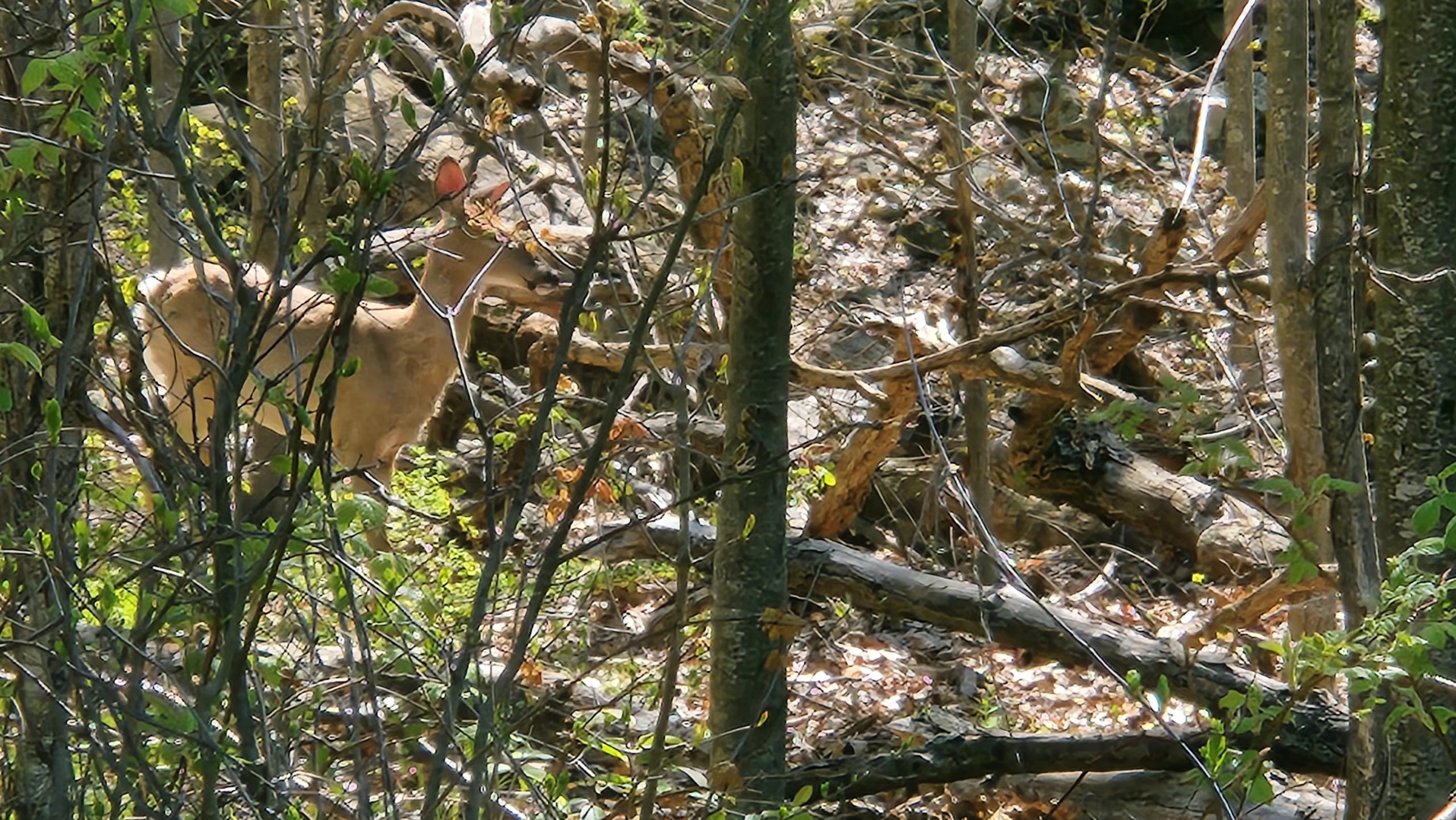 The only bears I saw up north were in New Jersey, as I mentioned above. The first bear I actually barely saw. I was walking on a narrow, single-track section of trail with thick underbrush. I heard something or someone shuffling in the leaves around the bend ahead. I stopped and called out “hello” calmly. As I stood there, the shuffling continued across the trail and through the underbrush. I could see the bushes moving. Then I saw a bit of black across the top of the bushes. It was the top of a bear’s head. I continued to talk calmly to it, telling it to keep going into the woods and I would stay on the trail and we would both stay safe. After a several minutes, I started walking again, talking to the bear calmly all the while. I heard the shuffling for a few more minutes on the other side of a mound that followed the trail.

I didn’t get a picture of that bear. The picture below is from a few days later when I was hiking with some section hikers. We came across a momma bear and her three cubs. Fortunately, we weren’t between them and they were far enough up the hill for all parties’ safety. Again, this photo was zoomed in closely to get a good enough picture. 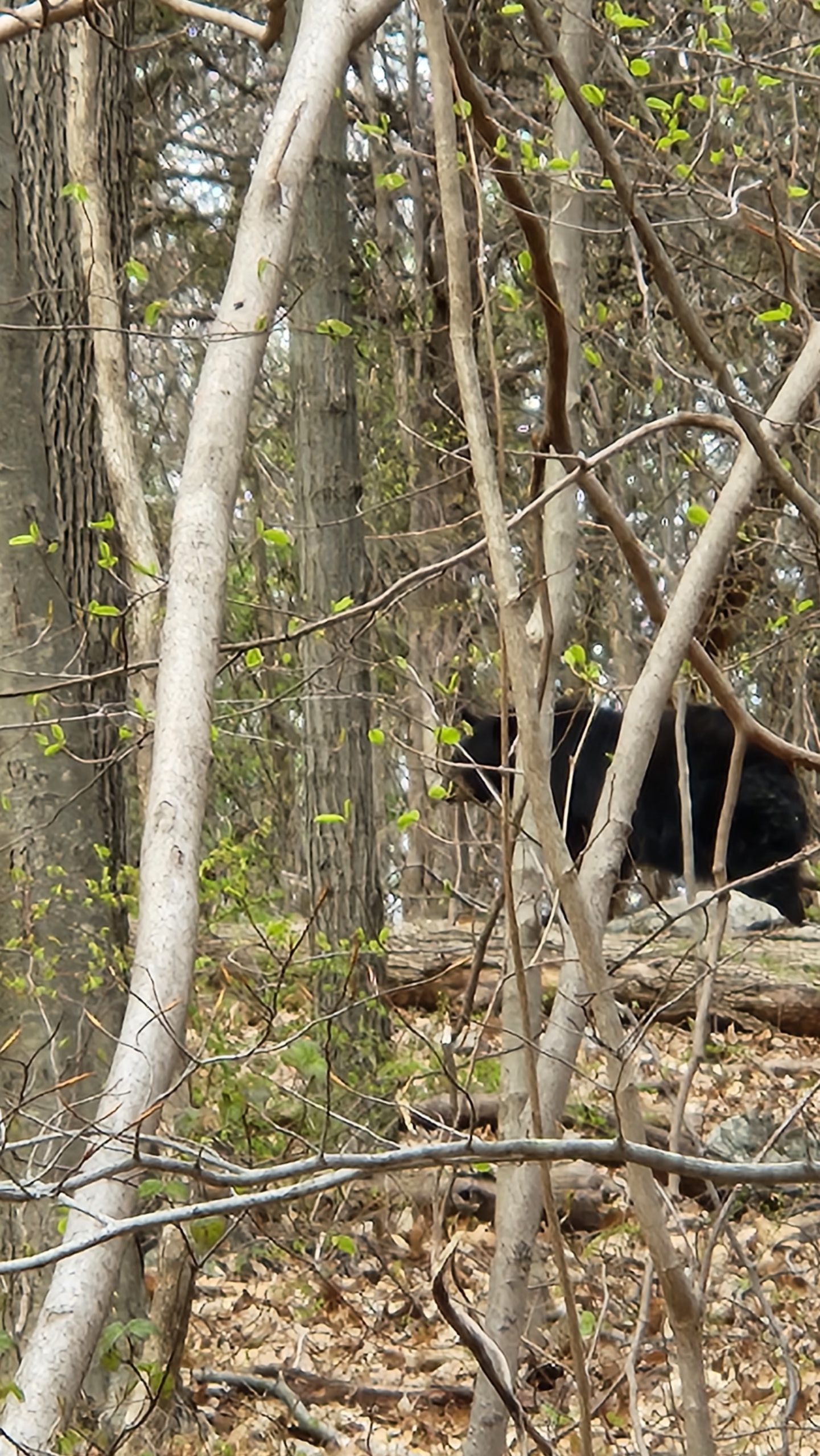 My favorite animal I’ve seen on trail so far has been the porcupines. Their faces are so cute and grumpy! They have a perpetually annoyed look about them. Their waddle is slow and begrudging. I have several stories about them, but will just share one here. I was staying alone at a shelter in southern Vermont. While I was perched on the edge of the shelter just hanging out until I was ready too cook dinner, I heard something come through the underbrush to the side of the shelter. I leaned over to look around the corner and saw this character waddling his way towards the shelter. I wish I had my video started because when I called out, “Hey you!” the guy literally jumped in surprise! It was hilarious! He looked quite bothered that I was there. I started to call to him to go home, that this was my bed for the night and he wasn’t welcome there. He turned around and went back into the woods. I stayed a safe distance away and started recording his waddle as I continued to harangue. To be safe, I made sure to put all of my gear up where porcupines couldn’t reach it when I went to bed.

But wait, this story isn’t over. In the middle of the night, he came back! I woke up to loud gnawing on a cinder block that was under the edge of the sleeping platform. I shined a light at him and went back to my harassing speech. Only, he wasn’t as cooperative this time. It took 20 minutes of him wandering around, gnawing on the wood and cinder blocks, before he finally left. And then, then, he came back again! This time, I didn’t even open my eyes. I hollered “GO HOME!” And he did. 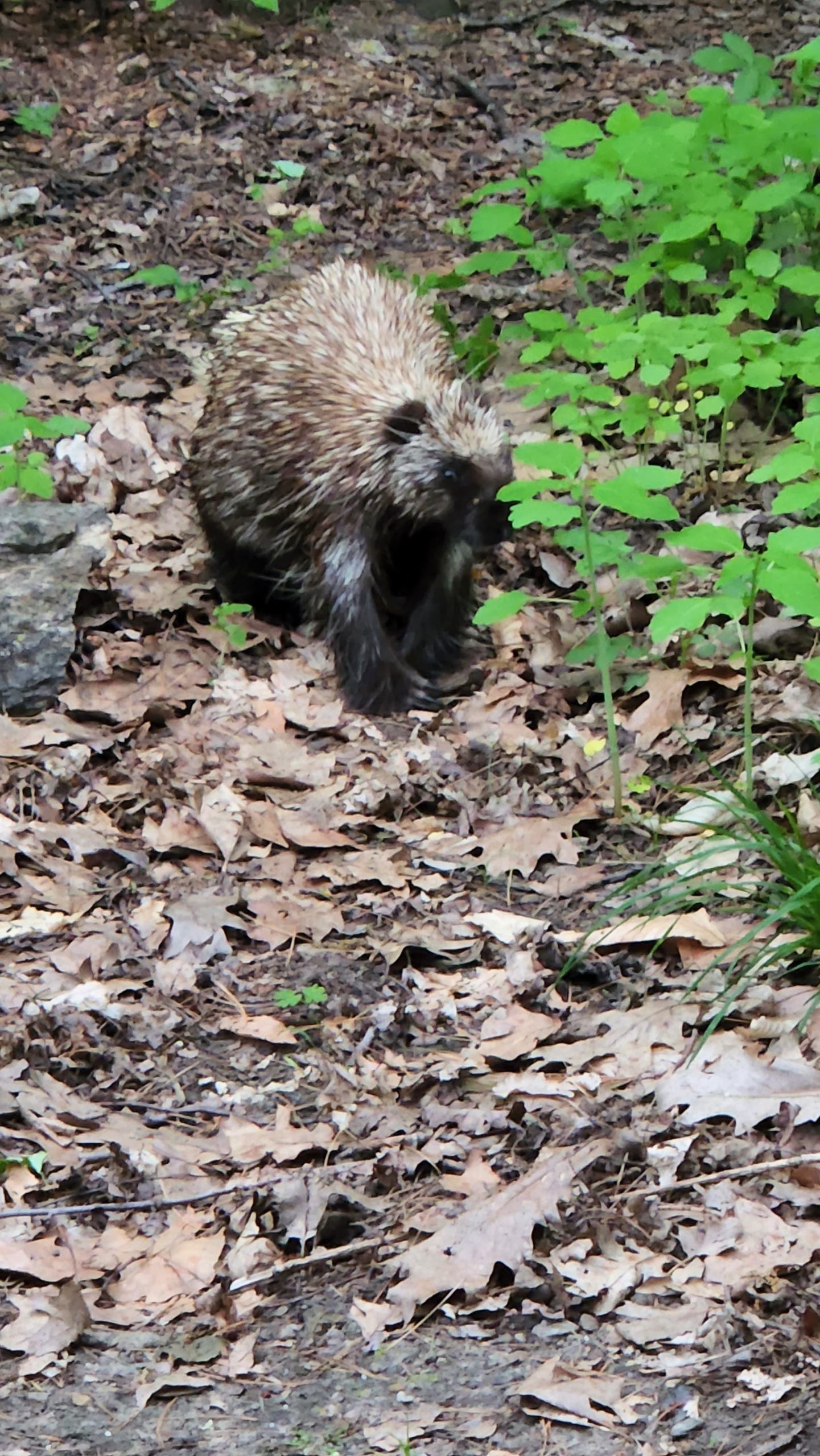 I was disappointed not to see any moose or beavers. I saw many beaver lodges and gnawed trees throughout the north, but never the animal. I heard a moose stomp nearby one night when I was camping along a lake in the Hundred Mile Wilderness, and again in the morning splashing in the lake.

What animal would you most like to see in the wilderness?