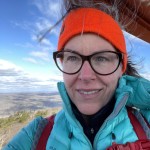 I’ve had the pleasure and honor of being in the right place at the right time for two impromptu interviews on the trail.

I signed a release for Green Tunnel podcast. I can’t remember the terms. I don’t think I am barred from talking and writing about the experience. I think that what I signed relates to the Green Tunnel folks being able to use my responses in whatever way they choose. My mention of their interview can only act as increasing awareness for them, right?

Looking at the website it was Mills Kelly and two others who performed the interview. Mills is a professor of history at George Mason University and the Director of the Roy Rosenzweig Center for History and New Media.

I’m pretty sure one of the other Green Tunnel team members present was Hayley Madl. Hayley Madl is a producer on The Green Tunnel Podcast. She is also a PhD student at George Mason University.

I think the third person was Ashley Palazzo. (?!!!?) Ashley Palazzo is a producer on The Green Tunnel podcast. She has a MA in history from George Mason University.

I tend to get deer in the headlights syndrome with public speaking and impromptu on the spot questions. My mindscape becomes barren, post apocalyptic.

I noticed the recording devices with furry wind muffs on the table where we sat in front of the shelter.

Serendipity: Are you recording now?

GTP: “Do you want to be interviewed?”

I felt my hands become clammy. My heart skipped a beat.
Serendipity: What is the topic?

Serendipity: Ok.
I pushed through the familiar anxiety. Clasped my hands tightly in my lap under the table. Sat up straighter. Took a deep breath. The release form appeared. I signed it.

Mother and son section hikers were at the table as well with the Green Tunnel Podcast crew. We had shared an emotional conversation on grieving earlier in the day at the Jim and Molly Denton shelter, a fine shelter with Adirondack chairs on a porch, a solar shower, and information on Jim and Molly Denton’s involvement with the Appalachian trail. The mother and son had just lost a family member unexpectedly. The mother’s brother. She asked me why I was hiking. I shared with her that my patients often impart the wisdom to not put off fulfilling my dreams, but to “do it now,” and not wait retirement or until later in life. I could see her becoming teary. We shared a moment marveling about the incredible and fleeting gift of life. We talked about the grieving process, to make space for grieving. I mentioned common quotes on grief, that grieving is as essential as joy, and the great privilege of love is grief.

I mention the beautiful moment with the section hikers in part because it was organic and rich.

I’ve spent some trail time questioning my interview answers. The following is not what I said.

Serendipity: Do you want the long or short answer (Did the interviewer just show a flash of concern?)

I mentioned the elevator talk blurb about my patients urging me not to wait to fulfill my dreams, but to “do it now.” I realized that doesn’t really get to the essence of why. I didn’t elaborate so I wouldn’t get rambly. One of my earlier blog posts includes a longer and still incomplete list of reasons for me hiking the AT.

GTP: “What is your favorite gear?”
Serendipity: My hoka speedgoats and dirty girl gaiters.

The interviewer asked me to elaborate and clarify. I realized that I was using insider lingo without identifiers.

Ira Glass from This American Life guiding people through interviews for context and detail.

Howard Stern after 9/11 admonishing a caller that no one would know what they were talking about referring to ‘the pile’ in NYC, meaning the pile of rubble remaining of the World Trade Center towers that was being combed through for remains and cleared away.

I then thought again about Ira Glass, now reporting on the crossover audience of public radio and Howard Stern listeners. I think the number was 8%. I can’t find reference to the quote now, it has been erased from the search engines perhaps.

I gradually stopped listening to Howard Stern when Artie had to leave. The magic was gone for me. The show was groundbreaking for its time.

Serendipity: Hoka Speedgoats are trail running shoes. I love my hoka speedgoats because they are bouncy and supportive. I have benign tumors in my plantar fascia on both feet at the arch. I have ankle instability on both ankles from a history of sprains and connective tissues disorder which leaves my ligaments too loose. My speedgoats include ankle support.

Dirty Girl Gaiters help keep debris and bugs out of my shoes. They come in fun patterns and are easy to use. I like that there is no strap that goes under the shoe. I feel like the strap makes the sole slippery. They attach to my shoelaces with a hook and by velcro to the back of my shoe.

GTP: “Do you have any luxury items?”
Serendipity: I don’t have camp shoes. I gave away my sit pad that was given to me. I sent home my stove.

GTP: “Do you have moisturizer?”
Serendipity: I have sunscreen that I use when I remember.

My luxury item is too much food. Food was one of my biggest concerns before the trail. I didn’t want to send boxes to myself. I started out with organic non GMO potato flakes and mostly preservative free dehydrated meals. I also had packaged, ready to eat organic lentils and grass fed beef from Brazil. After about day two my body said, “No, you aren’t eating this anymore.” It didn’t make me sick, but when I put it my mouth I didn’t want to chew and swallow. Now I eat chocolate covered raisins, yogurt covered raisins, nuts, dried fruit.

GTP: “What about energy bars?”
Serendipity: Yes, many many energy bars. I ave about 20 energy bars right now. When I road my bike across the US in 1998 I couldn’t look at an energy bar or electrolyte drink by the end. But my taste for them came back. So far so good.

Moving on to the second topic, I was asked if I prefer a privy or cat hole. We talked about the problem of surface pooping and finding wads of toilet paper just off the trail. I told the interviewers I do both privy and cat-hole.

When I first started on the trail my body would say, Nope, as I approached the privy. The urge and ability to poop would retract. One morning I passed a privy and my body said, “Yes, it’s time! Quickly, now!” That was a good day.

We talked about the problem of digging in rocky, rooty soil.

GTP: “What advice would you give for someone digging a cat hole?”

I wanted to give a good story for the podcast so I mentioned the Priest shelter with the confession logbook, many of the confessions about poop.

I was asked to stop and fill in details. I realized once again I was using insider language without explanation.

The Priest is a mountain in Nelson County, VA, in the Priest Wilderness, George Washington National Forest, off a spur of the Blue Ridge Mountains. Mile 829.7 on the AT. There is a shelter near the peak. Shelters have a logbook for hikers to sign, make reports, leave messages. At the Priest shelter the logbook has taken on the theme of confessional. Hikers confess their sins, many about poop.

Serendipity: I have a Priest style confession, but not about poop. It’s about urine, and also serves as an example into the incremental descent into being feral that tends to happen on the trail.

I had a conversation early in the hike where another hiker asked if I would pee in my vestibule.

“What’s a vestibule?” The mother of the mother and son section hiking team asked.

Serendipity: Some tents have a rain fly that creates a space between the tent and the rain fly where I like to put my shoes and poles. I have two tent doors so I have two vestibules.

A few weeks later on a rainy night at 3am I had to pee badly. My tent was at the edge of camp near the woods on a slight downhill toward the woods. I peed in my vestibule so I wouldn’t get wet in the rain.

Mills responded with a story about a hiker who attempted to pee in her tent into a talenti cup. Middle of the night. Heavy rain outside. She spilled the cup on her sleeping bag. I don’t know her trail name or if it was related to the incident. Peacup? Pee Talent?

The interview ended soon after and I hiked on.

I’ve been enjoying listening to the Green Tunnel Podcast while on the Appalachian Trail. I’ve been trying to remember to say Appalachian with the ‘la’ soft like ‘laugh’. During the interview I said the ‘la’ like ‘lay’ down an item. I grew up in Virginia saying the ‘la’ like ‘lay’ but now I understand the soft ‘la’ is more correct. The Green Tunnel folks said it the ‘lay’ way. So who knows.

I’d like to research and present an episode on the history of trail trees along the AT. What do you think, Mills?

Check back soon for the report on my other impromptu interview lead by thru  hiker Sir Elton. Part two!

I’m Wendy, trail name Serendipity! Excited to share my AT NOBO 2022 experience with you all. Back home in Connecticut I’m a Physical Therapist. I work in home care with a mostly geriatric population. My patients impart much wisdom. They tell me if there is something I want to do, do it now, don’t wait. So I’m doing it now!