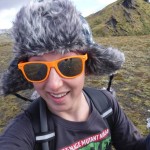 Appalachian Encounters of the Surreal Kind

Here is a recap of my first few days on trail:

It didn’t feel real as I stood for a photo underneath the arch. After a few snaps, I approached Mike to say goodbye. Though I knew it would be awhile before we met again, I did not feel sadness at the time of our parting. We hugged and I stated that I could spend hours saying goodbye so there was nothing else to do but begin. With one final hug, I turned and walked toward my new life. 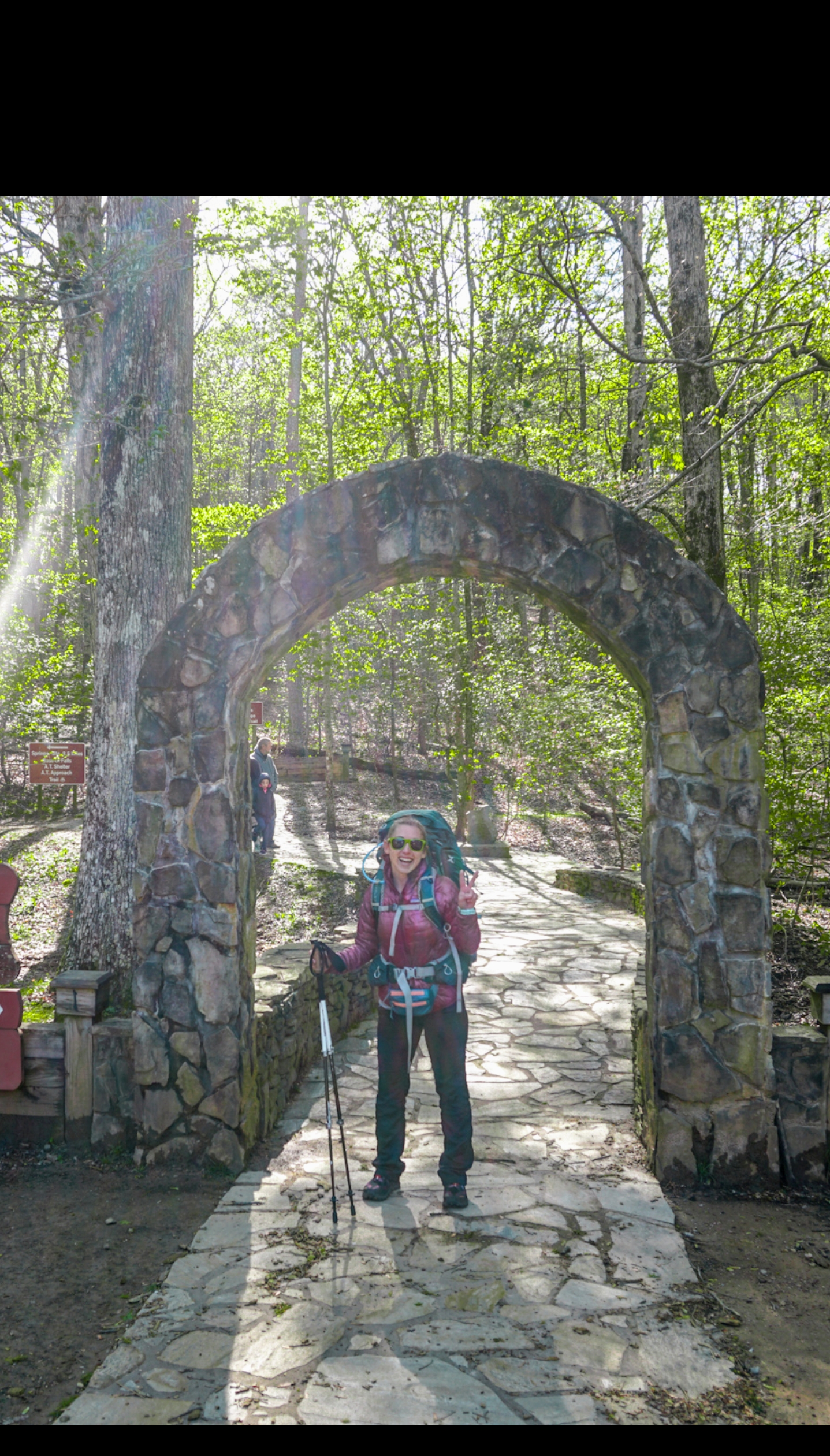 As I passed through the archway and made my way to the base of the falls, I felt nothing but focus and determination. In retrospect, I’m surprised I was not more excited. Instead, I addressed it as if it were my duty, a matter-of-fact that I take this leap into the unknown. 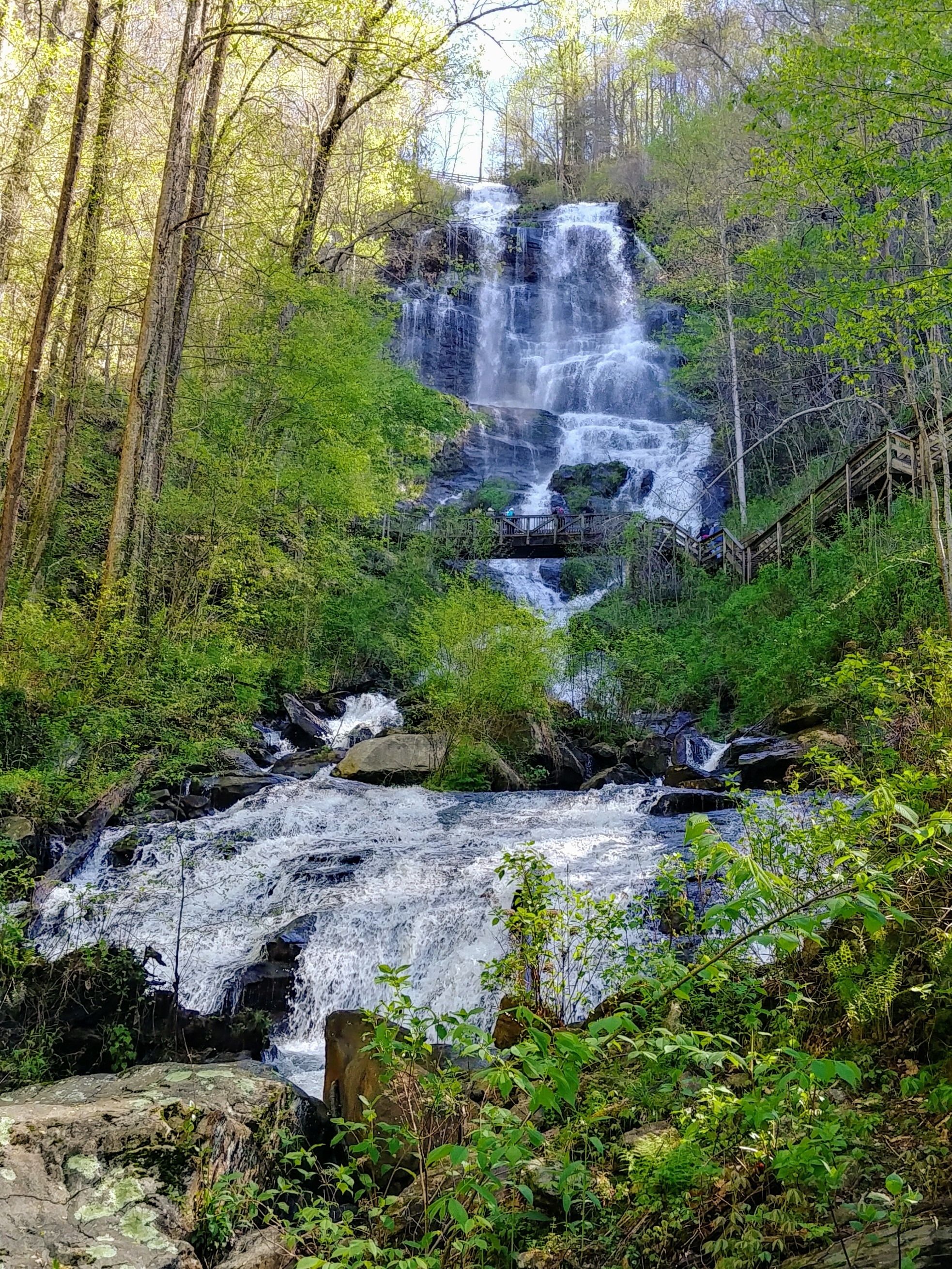 The climb to the top of the Amicalola Falls seems like a silly formality for the Appalachian Trail. Don’t get me wrong; the waterfall is jaw-droppingly beautiful, but I didn’t actually feel like my hike began until I reached the top, until I had officially started on the dirt of the Approach Trail.

That whole morning was so surreal. As I wandered into the woods, it hardly occurred to me what I was really doing; that this was it, this was what I had worked so hard for, this is what I had been dreaming of, that my adventure had finally begun. It came about so quick; I could not register my thoughts or emotions at the time.

A few miles in, I bumped into Mike on his trail run, a chance for one more goodbye. In our brief reunion, he mentioned meeting a girl at the Hike Inn named Fossy who was doing a similar flip-flop thru-hike to my own and suggested she and I might become friends. 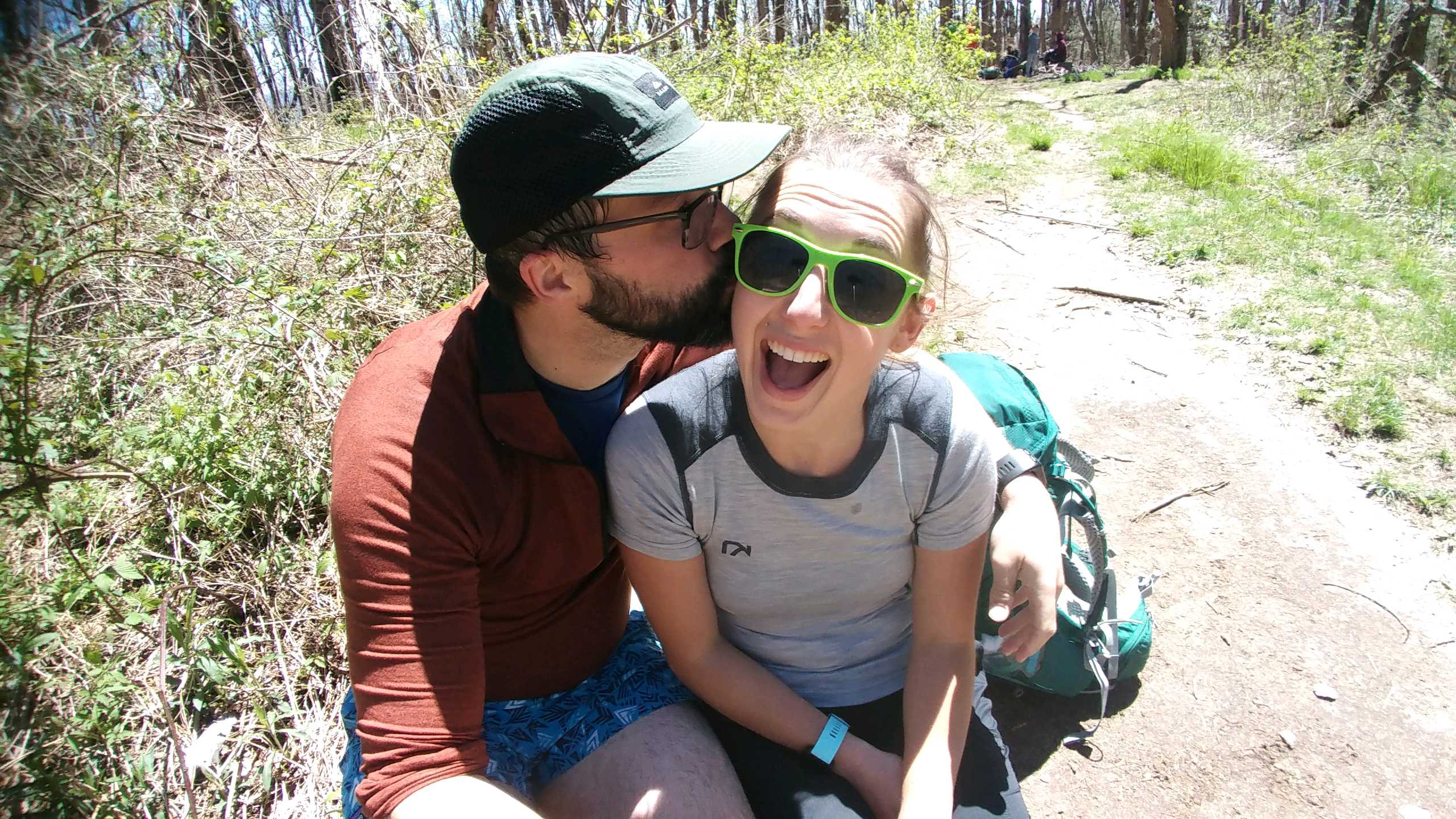 Goodbyes are always better the second time around.

By early afternoon, I reached the top of Springer Mountain and it was here that I met Fossy. We spent a little time talking as we took in the view from the top of Springer. We agreed we’d play the get-to-know-you game later when we got to camp. Again, it felt like a dream and I struggled to capture any thought or emotion. I was simply present. 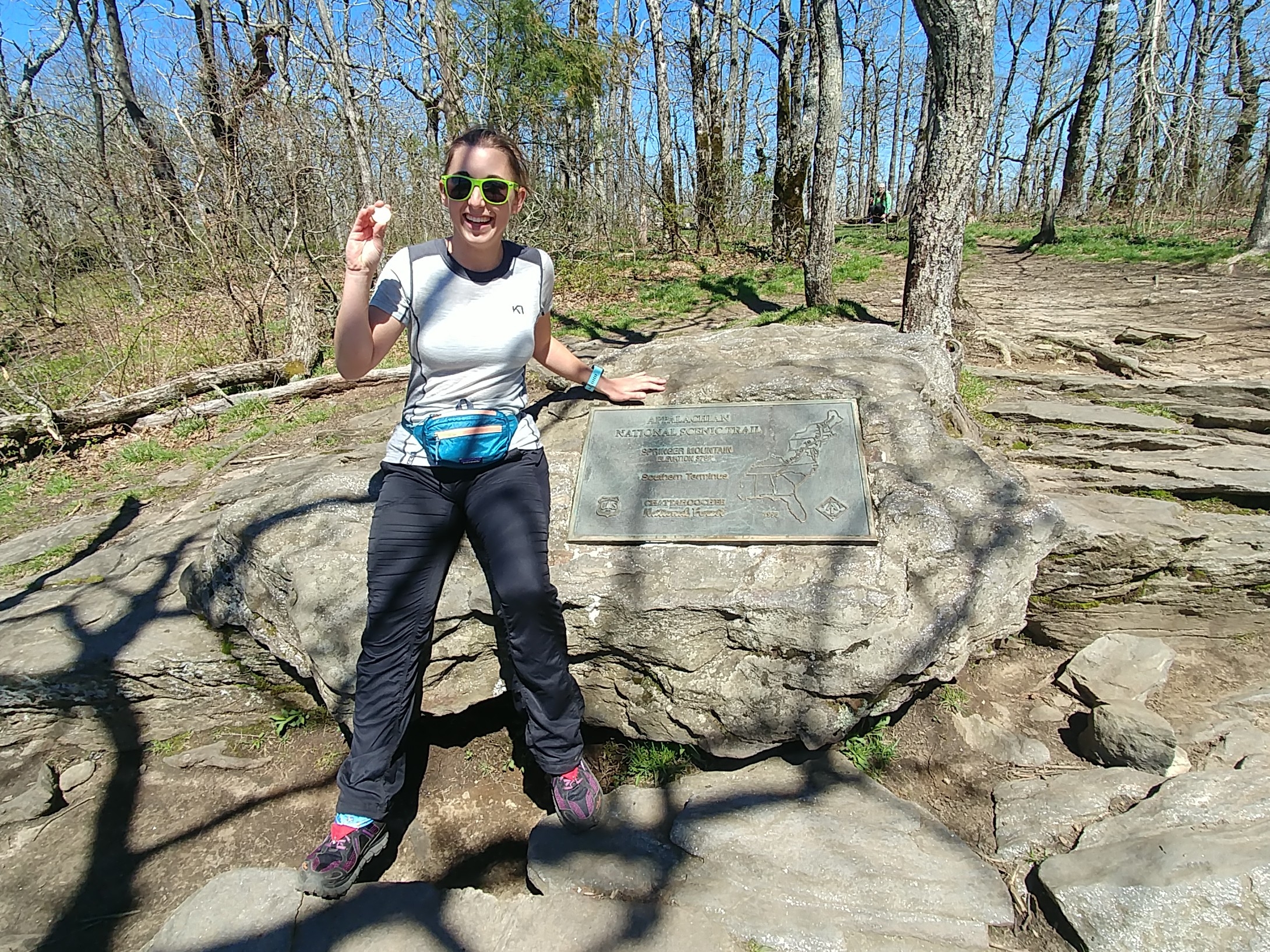 At the top of Springer Mountain with my prized eight year medallion.

From Springer, I carried on to Stover Creek Shelter where I met lots of characters. It’s mostly a blur of names and faces gathered around a campfire discussing random topics. Once again, I could not log emotion as I simply observed my surroundings. One by one, each character left the group to go to bed. I was one of the last ones, along with Fossy, to call it a night. 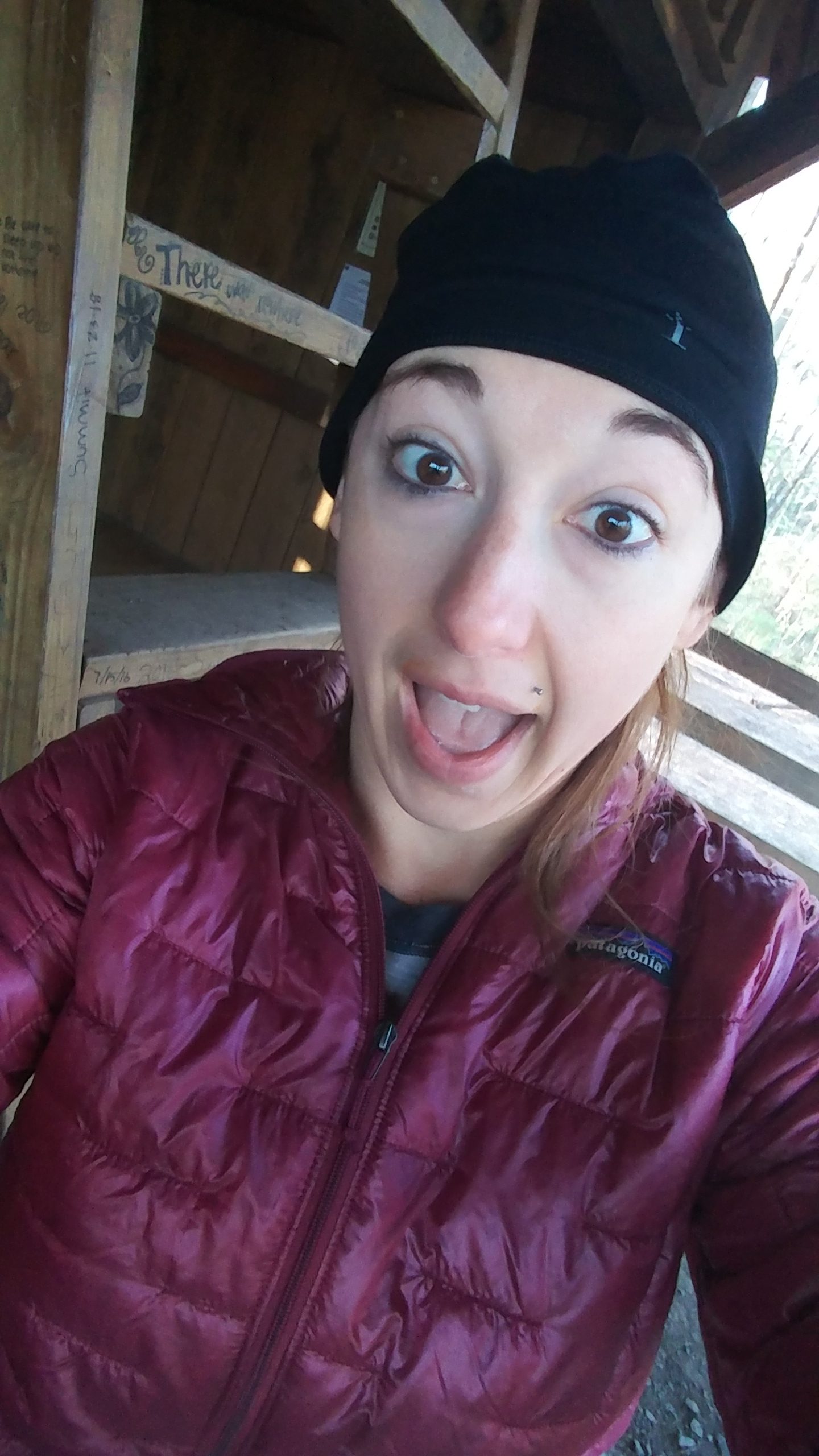 My excited face to wake up on the AT.

I had a dream that I quit everything and ran away to hike the Appalachian Trail. To my delight, I awoke in the Stover Creek Shelter. It’s real! 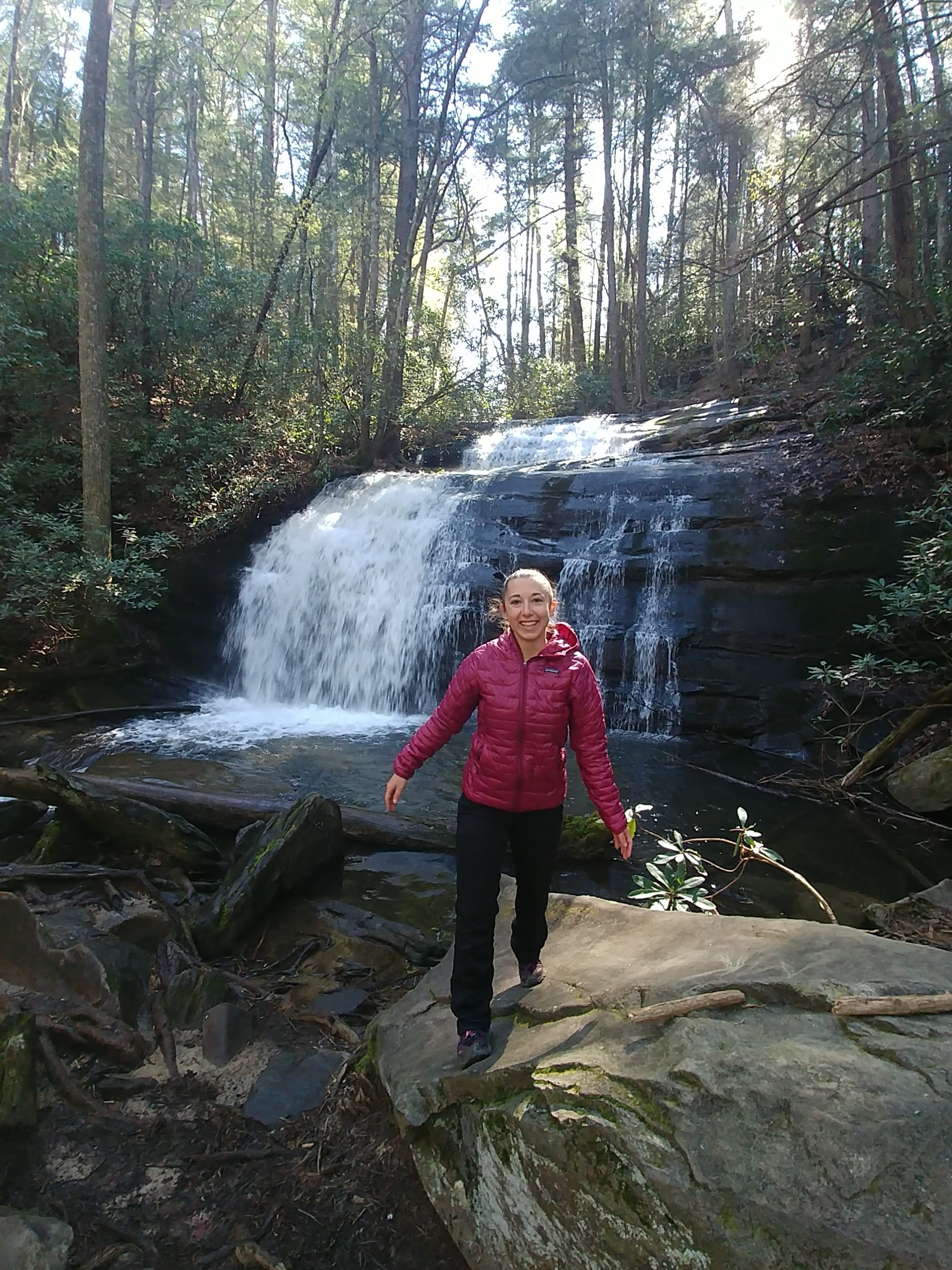 Playing on the rocks at Long Creek Falls.

It was a cool, cloudless day as I hiked gleefully along the trail. I stopped at Long Creek Falls for a snack and enjoyed the tranquil sounds of the waterfall. I could’ve sat there for hours but I had about 11 more miles to go. As I continued my hike, I saw Sassafras in the distance. I stopped for a moment, as the memory of our last encounter replayed in my mind. “I’m coming for you.” I said it out loud and I meant it.

I tackled Sassafras and the other mountains with an overwhelming joy. Though I may stop at times to stretch my calves, or break for a snack, I’ve kept a steady pace and overall, I am impressed to be out here hiking alone and at peace with myself. 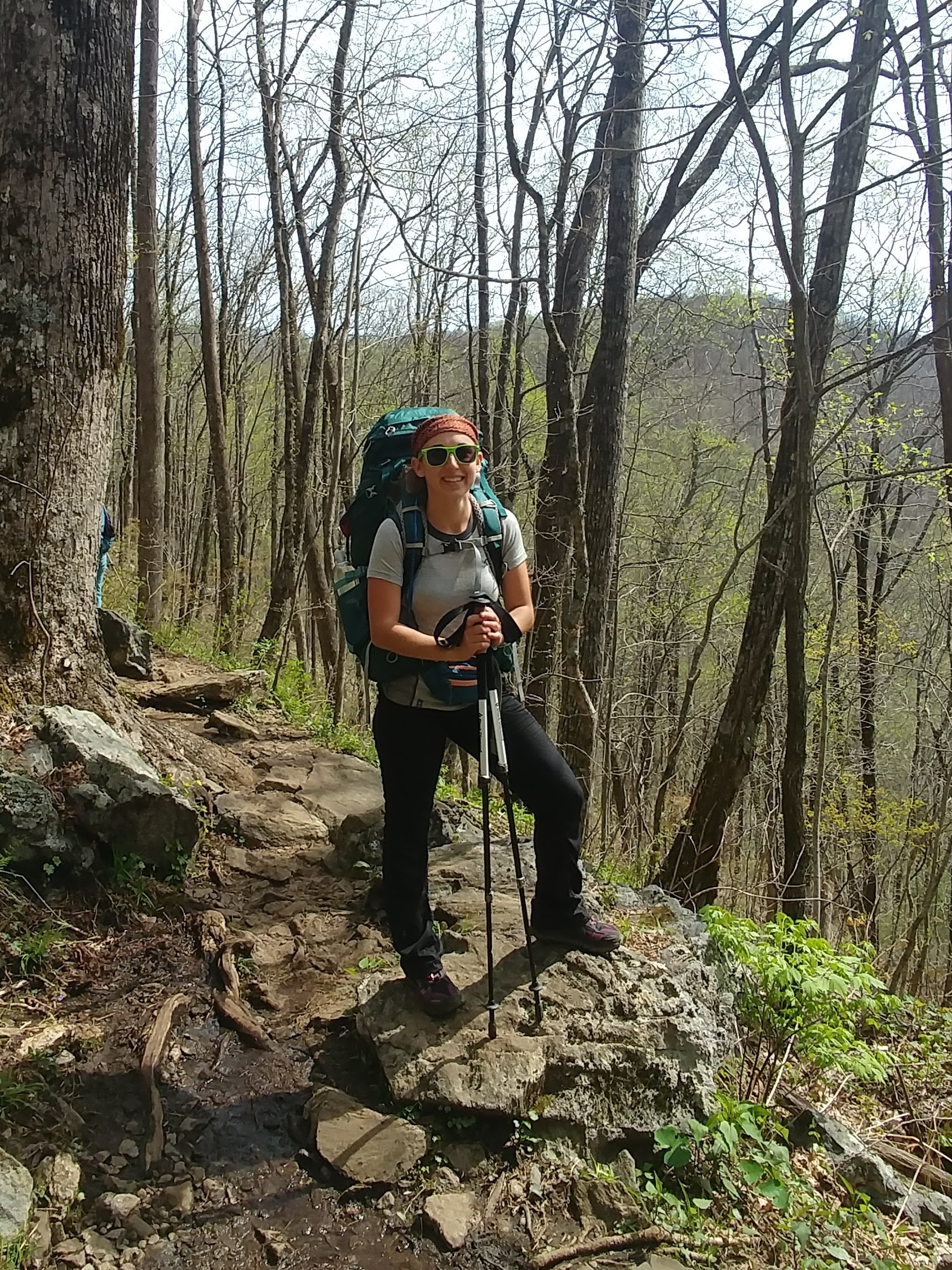 Bagging the Georgia mountains one peak at a time.

I rolled into Gooch Mountain Shelter around 5 p.m. after 13 miles and seven hours of hiking. With luck, I scored a spot in the shelter right next to Fossy. The shelter was crowded and I came to refer to it as the circus. This crowd was not the hiker bubble, however; instead it was comprised of families section hiking during their spring break. Annoyed by the clamor, I stayed in the loft of the shelter, furthering the previous night’s conversation with Fossy. 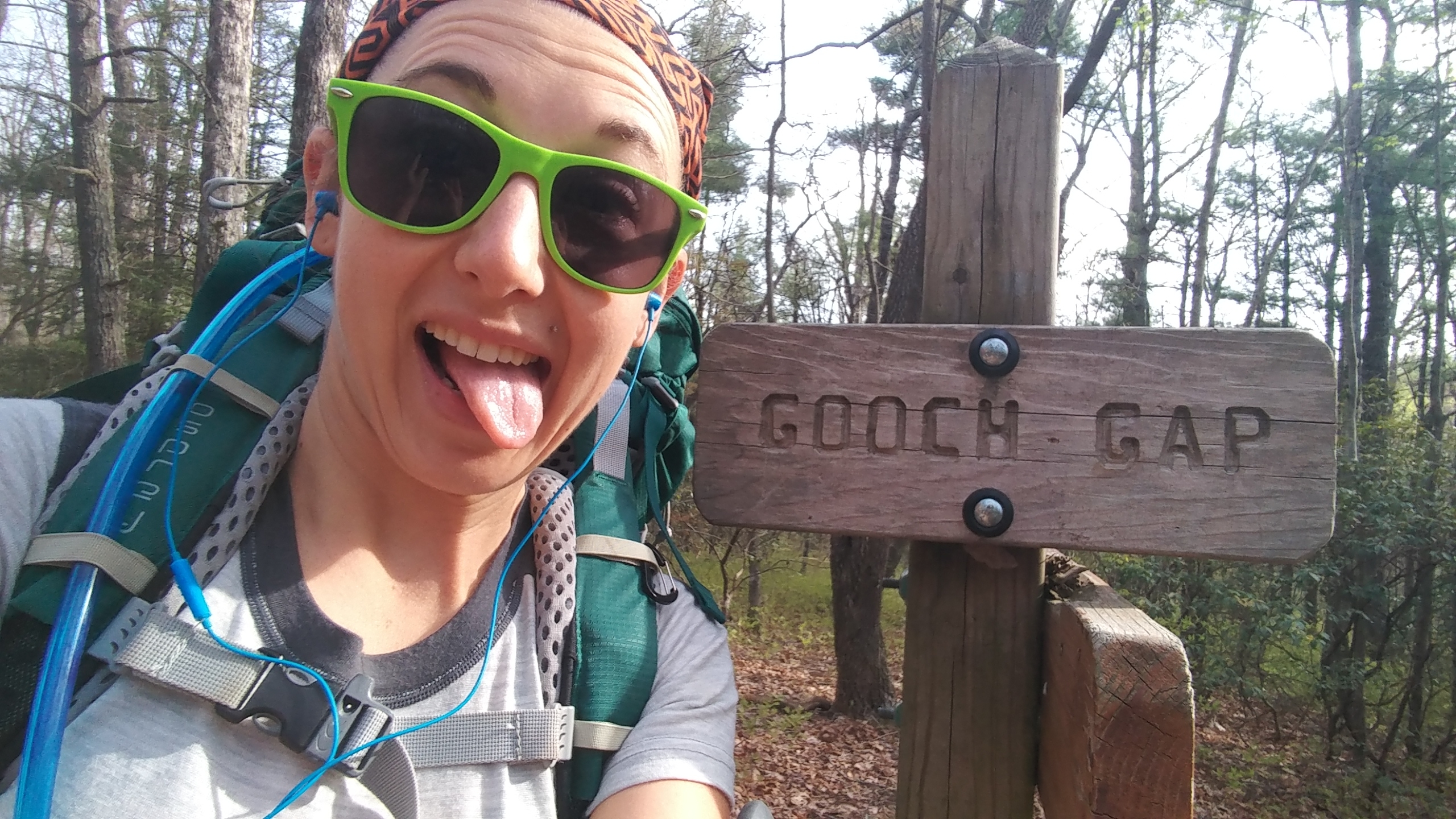 Morning antics along the trail.

The effects of winter still linger here. Hopefully the leaves will return to the trees soon as I’ve had to bum sunscreen off other hikers. Sunblock, an item I previously thought unnecessary to pack, would’ve actually been quite useful. I don’t want to add sunburn to my list of discomforts. Speaking of, I got a gnarly blister on my right big toe already. 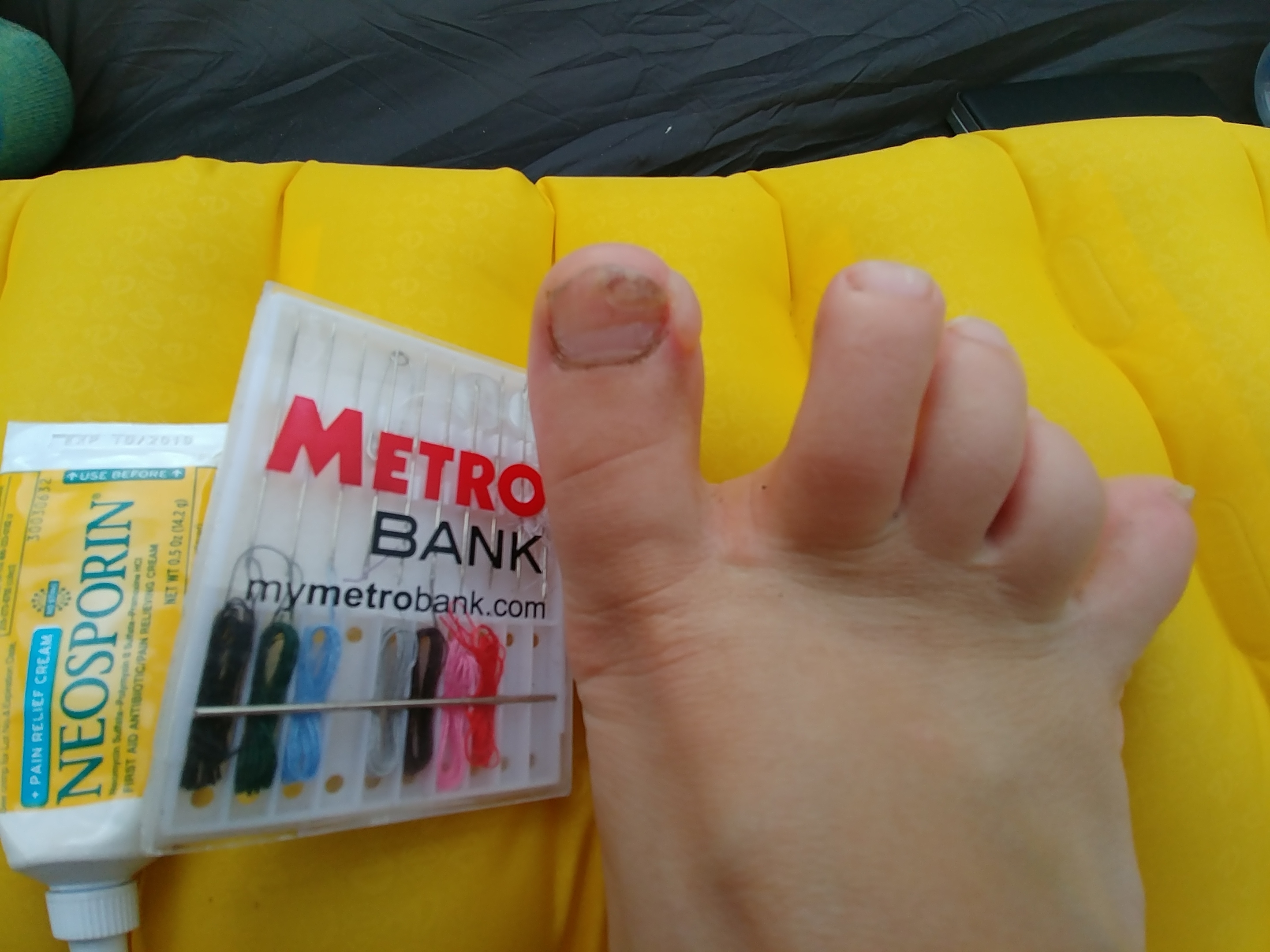 I met up with Fossy, Emily, and Zu Zu (Emily’s dog) at Lance Creek so we could hike together to Henry Gap, a “secret” camping spot just before Jerrard Gap. After the previous night’s circus, we thought it better to have a quiet night, just us girls. 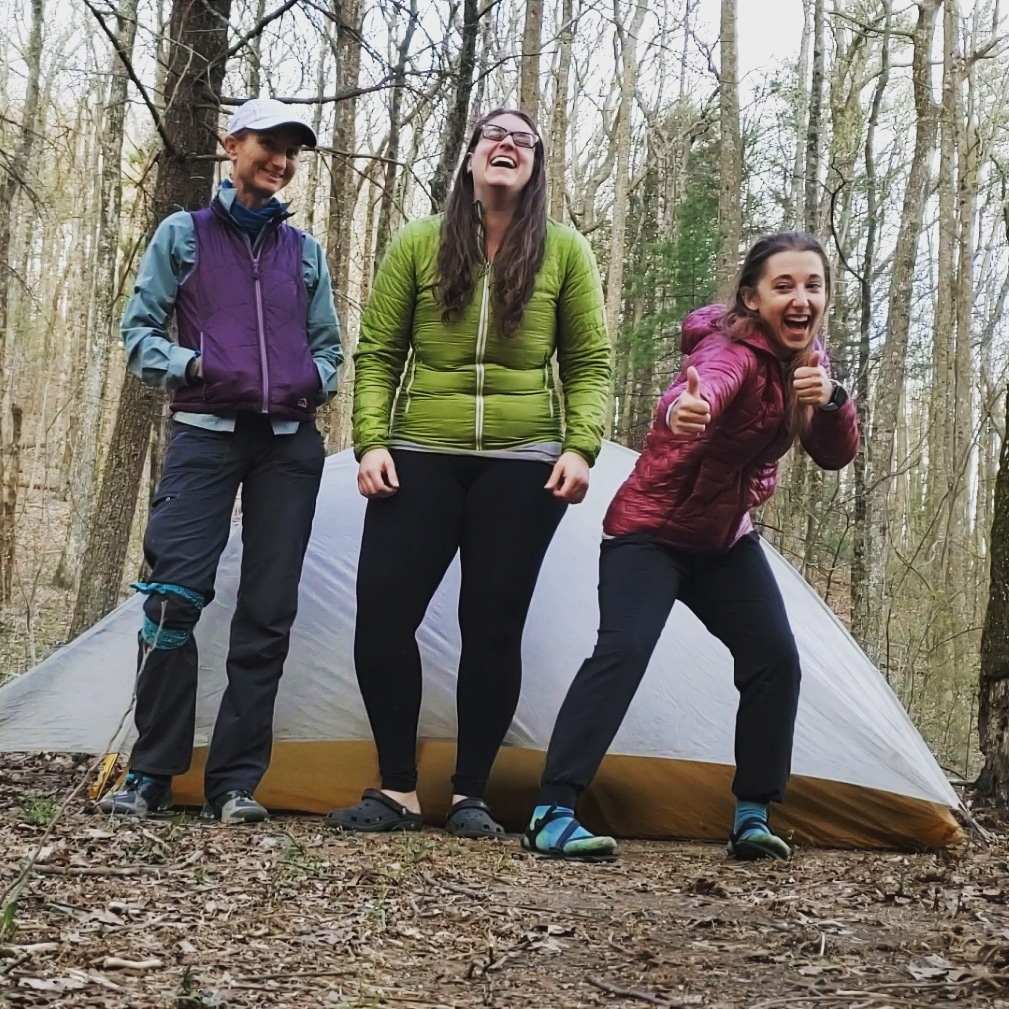 Emily, Fossy, and me at Henry Gap.

At camp that evening, it hit me for the first time that while I would see Mike in a little over two weeks for our Smoky Mountains trip, I wouldn’t see him again after that for two months. I started to cry. My first official AT tears fell over a future pain. Seriously, what’s wrong with me?

I guess the newness of being on trail overpowered any thought or fear of being alone, uncomfortable, or missing home. I expected this and yet now that I was in the thick of it, it felt much stronger than I had anticipated. I felt blindsided by the emotion. This is just part of the mental game of the AT.

I reviewed the letter I wrote to myself pre-hike and went to sleep knowing “this too shall pass.” 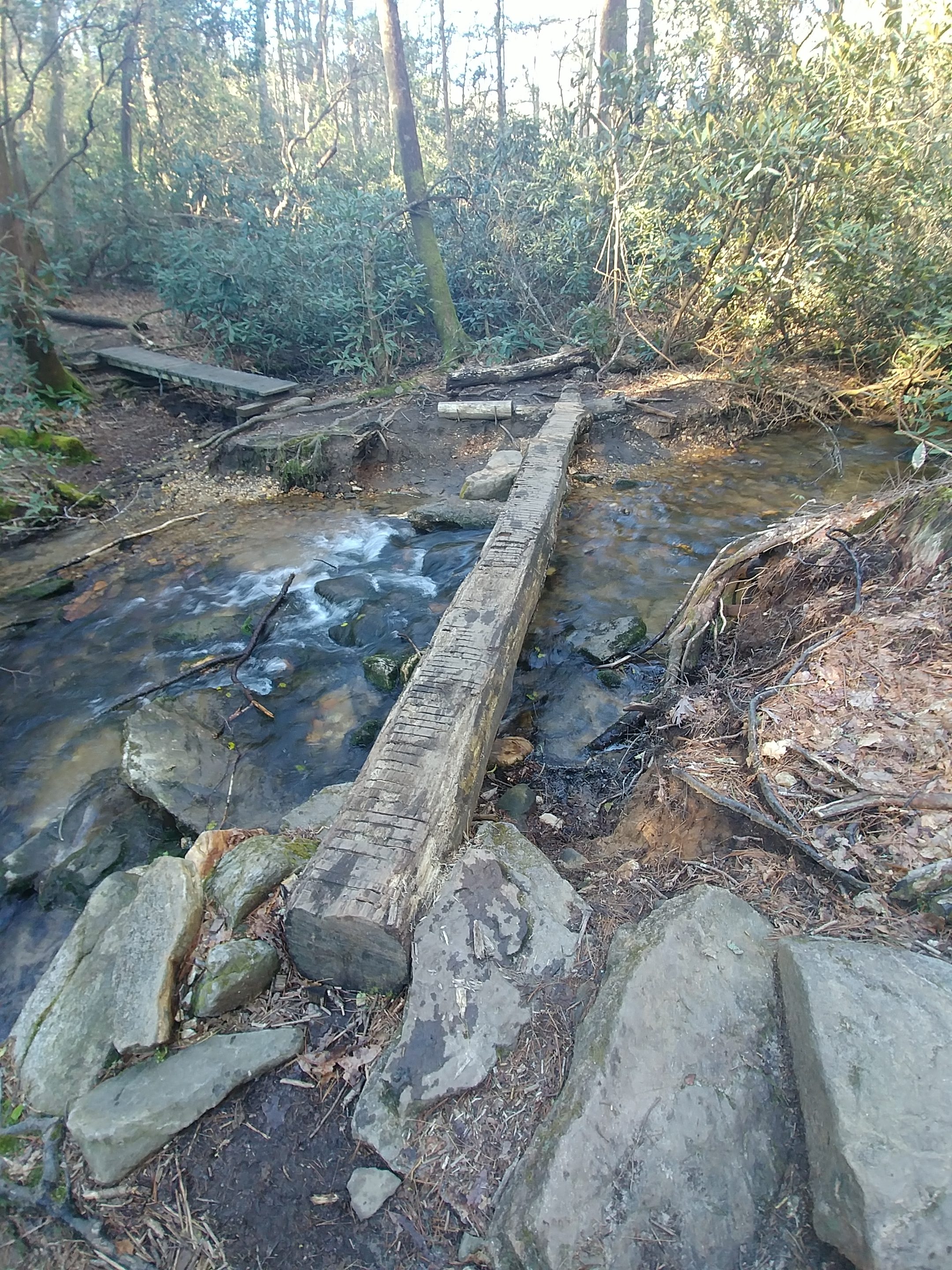