Pennsylvania State Police said the body of Michael Kaiser, 56, was found at the bottom of a 30-foot embankment along the Appalachian Trail in Lehigh County. Searchers began scouring the woods Thursday after Kaiser’s truck was found on Wednesday, Oct. 16, near Bake Oven Road.

Police said Kaiser was an experienced hiker who often spent several days at a time hiking. 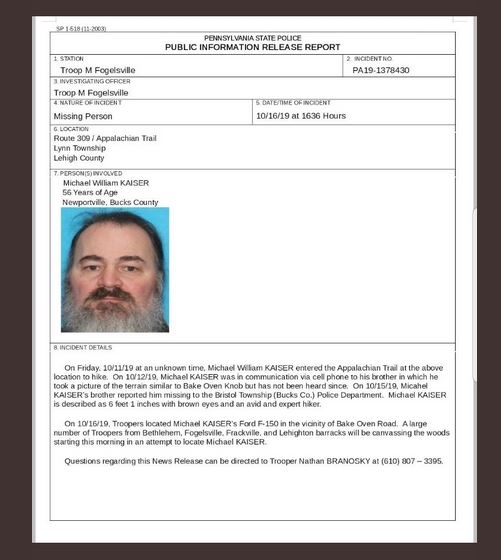 Kaiser, of Newportville, Bucks County, was last heard from on Saturday, Oct. 12, when he texted a picture to his brother of terrain that looked similar to Bake Oven Knob, officials said. He started his hike on Friday, Oct. 11.

His brother reported him missing on Tuesday, Oct. 15.

In September, David Ladley Swanson, 53, of Durham, North Carolina, died of cardiac arrest while hiking on the Appalachian Trail near Roan Mountain. Jeffrey Aylward, 63, of Plymouth, Massachusetts, also known as Dusty Pilgrim, was found dead in his tent near the Appalachian Trail in Maine in August.

Image by Steve Raubenstine from Pixabay