The following is a guest post by Eddie “Leaky Boots” Lough. Bill Irwin was the first profoundly blind person to complete an unsupported thru-hike of the Appalachian Trail.

“God, if there is any way I could pay you back for

what you have done for my life, just please, let me

know what it is, and I’ll do it.” And then the Lord

told me through a dream that He wanted me to

hike the Appalachian Trail this year, and so I tried

to reject that thought…I said, “God, if you’re really

serious, just keep bugging me about it. I’m like an

old mule, you have to hit me over the head with a

On the day before Thanksgiving, 1990, Bill Irwin and his guide dog, Orient (trail handle: The Orient Express), completed an eight-and-a-half-month, 2,146-mile, continuous hike from Georgia to Maine, a hike that required several million human steps, none of which Bill could see, and several thousand falls, all of which he could feel. My daughter, Emily, age 11, and I were among the lucky few who went looking for Bill, found and hiked with him. That encounter changed our lives. 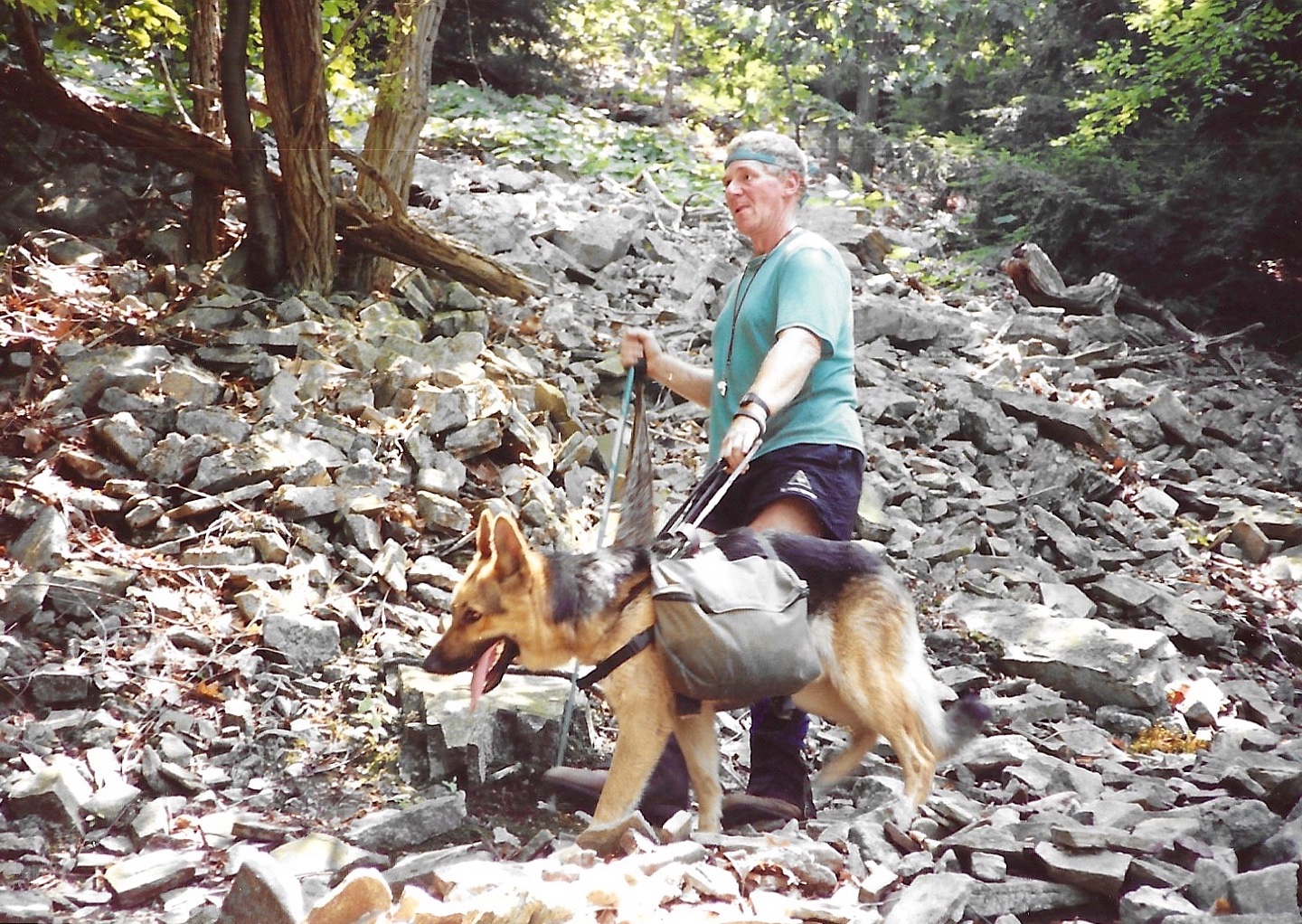 With trail map in hand, on the morning of July 4, 1990, we drove from Baltimore to Duncannon, PA where the trail comes off Cove Mountain, travels through the main street of this quiet, little hamlet, and crosses the Susquehanna and Juniata Rivers. (We had no idea where he was exactly, but had gauged from newspaper accounts that he was somewhere in this area). There, just short of the bridge, two thru-hikers, heading north in the early morning light, told us that Bill was two hours behind them. We located the trailhead, parked our car, and headed south.

“Three times (in my life) I was told I was going to die.”

It was an incredibly muggy day. Tiny winged creatures feasted on us as we made the tortuous switchback climb to the top of the ridge. Once there we moved more quickly across a winding, rock-strewn path. We had paused to take a short break when around the bend they came, the German Shepherd in harness, dragging the man with a trekking pole in his right hand, multi-colored pads protecting his knees and a sweat-laden handkerchief glued to his forehead.

“As I was checking out of that treatment center, I opened

my mouth to say something, and He took over, and what I

said was that my name was Bill, and I was an alcoholic.”

We introduced ourselves. Bill couldn’t believe that we had come so far to “find” him. He was a husky guy with a broad, beaming smile and a barrel laugh. As we hiked together for the three miles back to our car, we realized that we were in the presence of an extraordinary team. The dog was unbelievable. Orient would lead Bill in a manner that would enable him to step gingerly “around” different obstacles (here, mainly sharp rocks, scree, and boulders). Once, as we approached a sapling, which had leaned menacingly across the trail, we warned Bill of its danger. He said, “Ed, watch the dog!” Orient led Bill to within three feet of the tree and stopped. Bill carefully probed the area with his pole, located the face-high intrusion, and slid his body beneath the tree. 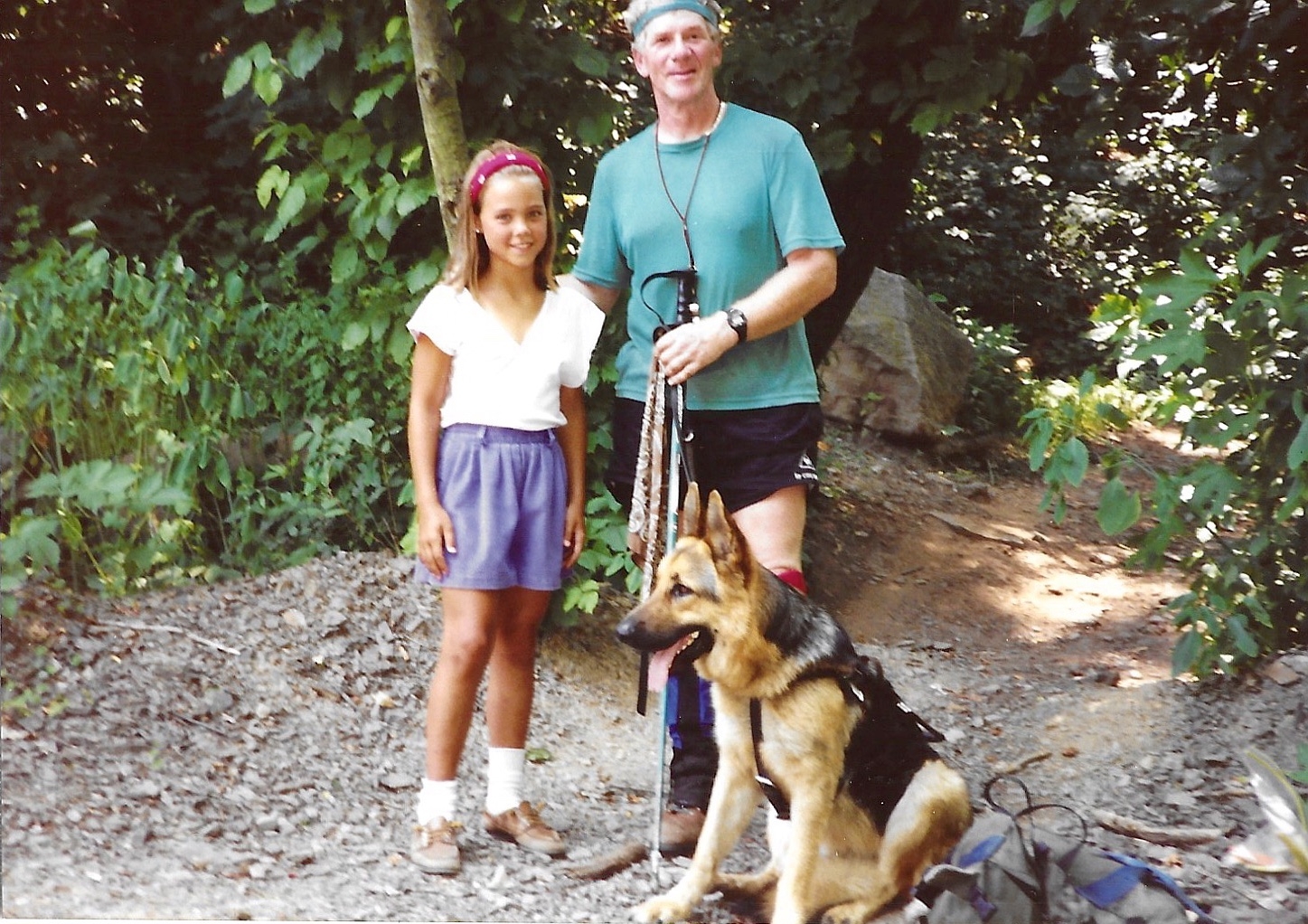 But no matter how skillful the dog, one had the sense that something else was happening here, that there was another Presence in the lead. I mean, the dog couldn’t tell the difference between the white paint blazes of the AT from blue blaze trails which identify hundreds of intersecting side trails along the way! Or, could he? Why didn’t these two get lost on a daily basis?

“Another problem has been with the rodents, but

hard and don’t eat much, and when you’re really tired,

At the trailhead where we parked, we took some pictures, exchanged hugs, and said our goodbyes. As we drove south along the Susquehanna toward home, Emily, tears streaming down her face, touched my arm and said, “Thanks, dad!”

Three days later we were drawn to him again. He had stayed at an assistant postmaster’s house up on Cove Mountain to give Orient’s swollen paws time to heal. We took him water bottles, a pair of  “1000 mile” socks, and fingerless cycling gloves with padded palms to help him break his falls. In his book, he would refer to us as two of his “trail angels.”

(There, he told me his Virginia story. While completing the 500 miles in that state, he came into a border town one morning to a small diner for lunch. The female owner was not going to serve him because of the dog. So at his table, he said to her, “Tell you what…I want to order everything down the left-hand side of this menu! And when I finish that, I want everything down the right side!” The owner started to warm up to Bill after that.) 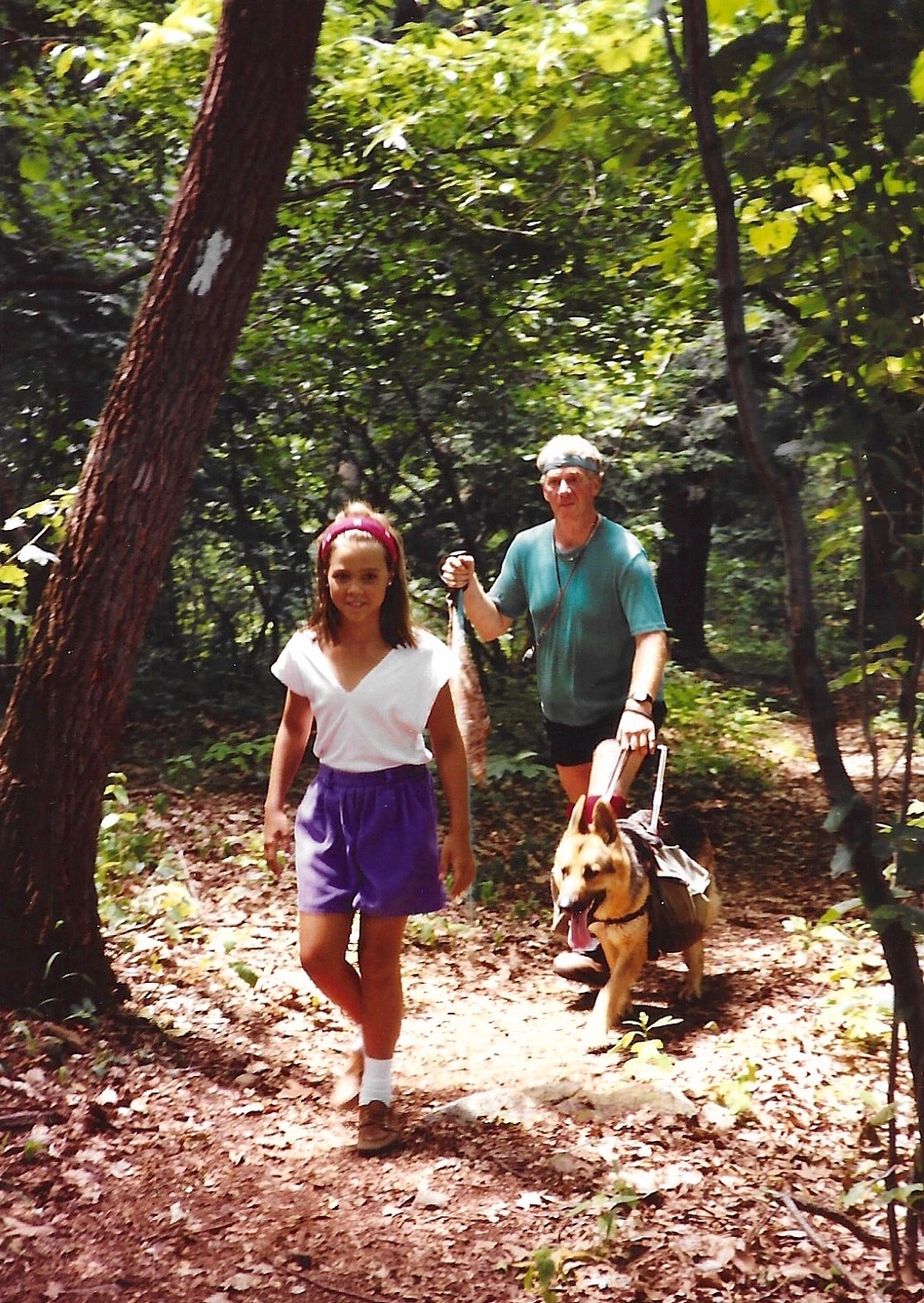 In the weeks and months that turned summer into fall, we followed him through Pennsylvania’s rocky obstacle course, past traffic jams at Bear Mountain Bridge over the Hudson River, across a piece of Connecticut, into the Berkshires of western Massachusetts and up part of the Long Trail in Vermont. We cheered him on as he tackled the treacherous White Mountains of New Hampshire, became lost in a two-foot snowstorm in southern Maine, and negotiated swollen streams (from heavy rains) in central Maine in early November where, in one incident, he was almost swept to his death.  All along the way, Bill would construct audio tapes of his experiences and send them to his parish support group in North Carolina where almost-monthly newsletters were sent to interested followers.

“The current was so powerful that it not only swept

me downstream, but also kept me from being able to

regain my footing.. Consequently, I had to get across

by grabbing rocks with my hands, like I was swimming,

and pulling myself across the bottom of the river…”

On November 8, 1990, Carolyn Starling, the driving force behind Bill’s support group at the People’s Memorial Church in Burlington, North Carolina, called me. Bill had invited Emily and me and others whom he had met on the trail to walk the final three miles with him on the day before Thanksgiving. On Monday morning of that holiday week, my pack was at the front door. With Emily, I would drive 17 hours to north-central Maine. And then, things began to unravel…work pressures, family commitments, the inability to take Emily out of school (a broken promise to her)…my life had gotten in the way. I called Carolyn that night and, somewhat incoherently, told her we couldn’t be there. She said Bill would understand. 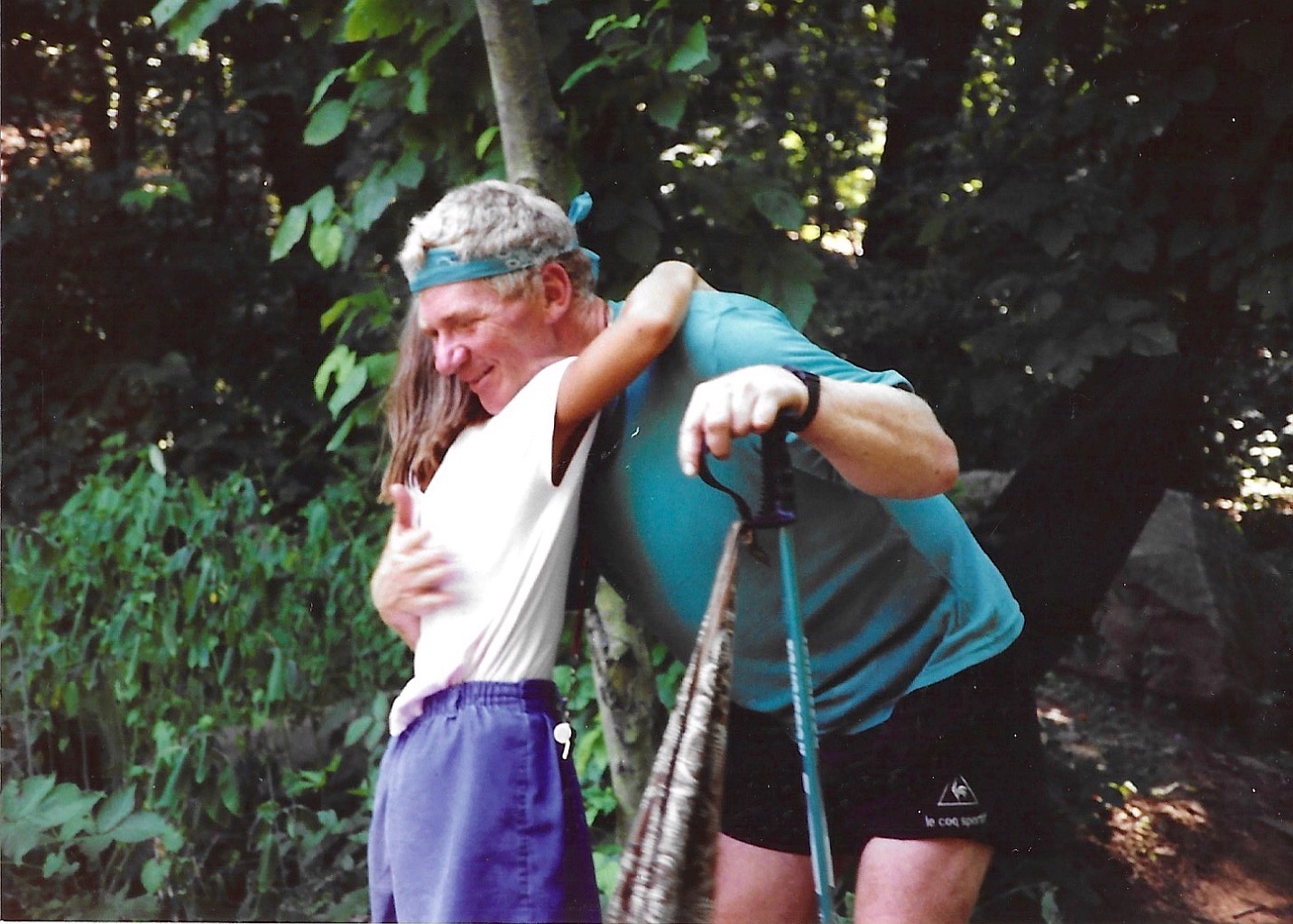 On Thanksgiving Eve Day on the national news, sandwiched somewhere between Michael Milken’s “tears” and Saddam Hussein’s jeers, Bill Irwin, with full pack on the trail, looked around at the reporters and cameras and said, in jest, “Seen any white blazes lately?” He then completed the Appalachian Trail, fell to his knees, and gave thanks to his Lord as a contingent of friends and supporters sang “Amazing Grace.”

“…and so, I said the sinner’s prayer upon the side of

the mountain at Old Fort, North Carolina, and that day

accepted Jesus as my personal savior, and continued

to come here to church and continued to grow…”

In retrospect, Bill had paid the supreme debt, the ultimate IOU, for a transition he had undergone a few years before.  But he would say that you never really make final payment, that each day in a life is Thanksgiving, that living one’s faith regularly is what life is about. The “trail magic” of which he constantly spoke (people being there when he needed them, unexplained incidents that protected him, etc.) were blessings in disguise. Actually, Bill, himself, was the “magic” to all those whose lives he touched, whose lives he changed, and whose lives have taken on different meanings.

On the day after Thanksgiving, my family and I retraced some of Bill’s steps. Our mountain cabin lies at the base of a ridge over which the trail makes its way through the Michaux State Forest in Pennsylvania. The Pine Grove Furnace General Store fashions itself as the true halfway point on the trail from Georgia to Maine and offers thru-hikers a true gastronomic challenge. Could Bill have stopped there this summer?

On a flat gravel path paralleling beautiful Mountain Creek, we hiked to little Fuller Lake, passed the historic furnace restoration, and headed up to the store. Emily and Brendan closed their eyes and read signs with their fingertips. While the store is open mainly during the summer months, its big front porch contains Appalachian Trail memorabilia, old chairs in disarray, a battered, but working, soda machine and a trail registry in a wooden stand. The kids ran to the registry, opened the lid, and began paging through a large notebook. There among entries by Rosehips, Lagunatic, Geek and Ziggy, Trail Poke, and the Florida Flyers was scratched this greeting:

I ate ½ gallon of ice cream (Heavenly Hash) but, it took

20 minutes. It feels great to be halfway to Katahdin.

Certainly one of God’s miracles. A beautiful day to hike.

God bless you all on this pretty Sunday.”   -Bill and “O”

Later that night at the cabin, I kissed my wife goodnight, tucked in the kids, threw my sleeping bag over my shoulder, and went outside where I slept peacefully under a million stars. 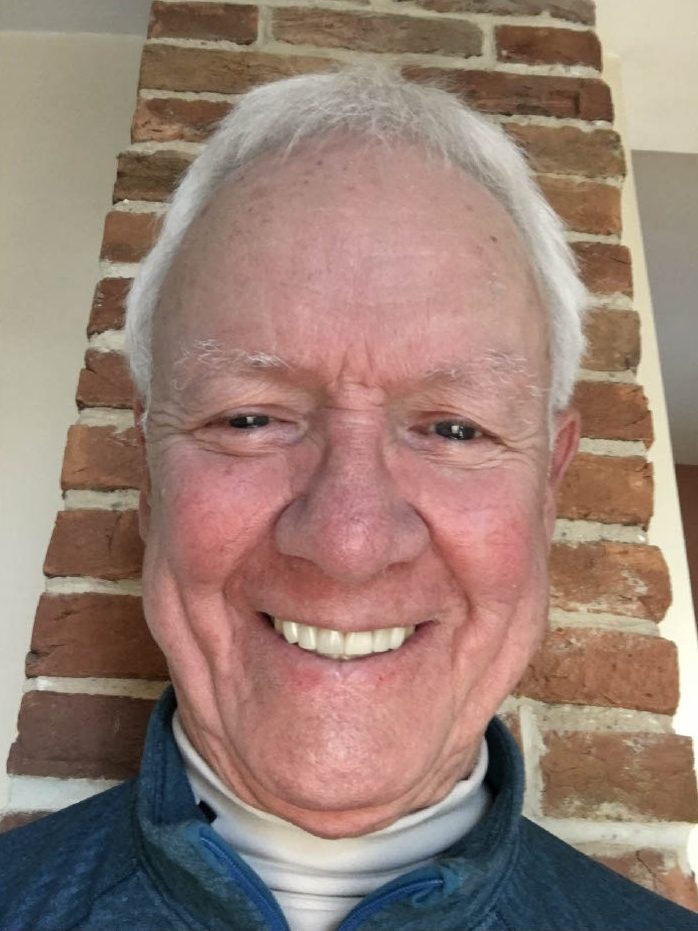 This article was written by the author in December, 1990 but never published. All quotations, except for the last, came from the newsletters of the Orient Express and Bill Irwin’s testimony to the People’s Memorial Church. All photos, including featured photo, courtesy of the author, Eddie Lough.

In the mid-197s while teaching, I started and managed a wilderness outfitting shop called the RidgeRunner, in Baltimore, MD, where we helped thru-hikers plan to realize their dreams. In 2020 I turned 77 and retired from an 18-year stint as a high school counselor. This past fall I slackpacked my way solo for 211 miles on the AT through Rocksylvania and finished a state I started in 1975. At the PA/NJ border on the Delaware Water Gap bridge, I surprised my four grands whose parents were day-hiking south with them out of the New Jersey woods! I plan to continue to backpack north from that point this spring unless COVID-19 restrictions are in place.