I did it! My hike is complete!   On Aug. 13, 153 days after setting out from Amicalola  Falls, I reached the iconic sign on Mount Katahdin.  As I write this a week later I’m still in a state of disbelief.  Sometimes I feel like this journey, so long a dream and so long to complete, never happened.   Like I just woke up from a dream.  Alternatively, sometimes I feel I’m still on the trail but just taking a break. I do have one constant: simultaneous conflicting emotions.  During the final weeks of the trail I wanted the hike to end and never end at the same time.  Now that I’m home the luxuries are nice but confusing.  I’m excited my world isn’t limited to hiking but I can’t stop thinking about hiking.

I set out with Kenya, Gravity, Seven, and Double-tap from Monson, excited and, to be honest, overconfident.  By this time I felt we were elite hikers, the worst was behind us.  The elevation profiles didn’t look daunting and the long-term forecast was pretty good; for Maine, anyway.   A sign at the entrance to the wilderness warns hikers to bring ten days of supplies but we planned to transit the wilderness in four days.  Just to be safe I’d take four and half days of food.  Like I said, overconfident. 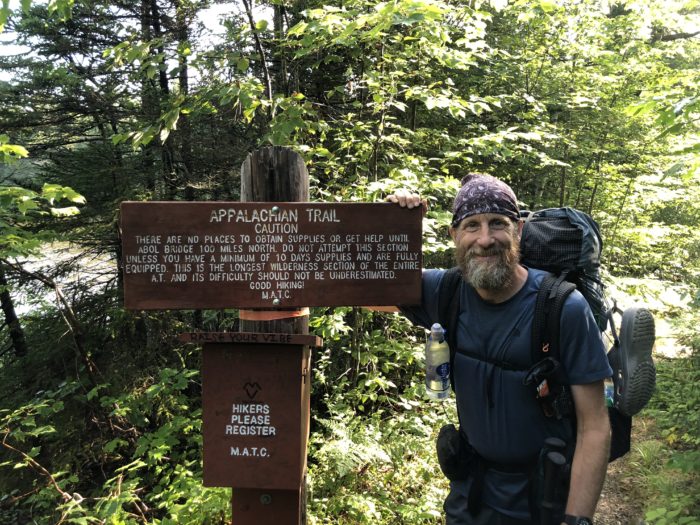 I took four and a half, not ten, days of food but I wish I took a little more.

Twenty-five miles a day didn’t seem too aggressive, at least not while sitting in the hostel drinking beer and basking in the glory of a nearly completed thru-hike.  Maine still had some surprises for us.  We made just over 20 miles the first day but didn’t feel overly concerned.  After all, we had a late start due to the excellent breakfast at Shaw’s and the elevation profile of day one was the most significant in the wilderness.  Although the weather was nice the previous day’s rain had swollen the rivers, forcing multiple fords that slowed us down.  We set up a stealth camp after dark and reassured ourselves that tomorrow would be better, an easy 25-miler for sure. Right?

We hiked all day and tallied an impressive… 17.3 miles.  It wasn’t from lack of effort because we hiked all day.  The climbs and descents were not dramatic but continuous, short ups and downs all day.  The trail was always rocks, roots, and mud.  The streams forced five or six fords, which are fun but slow.  I was trying to keep my boots dry so every ford meant taking off the boots, wading across the river, and then drying my feet before re-donning and continuing on.  We were definitely behind our food and mileage schedule. 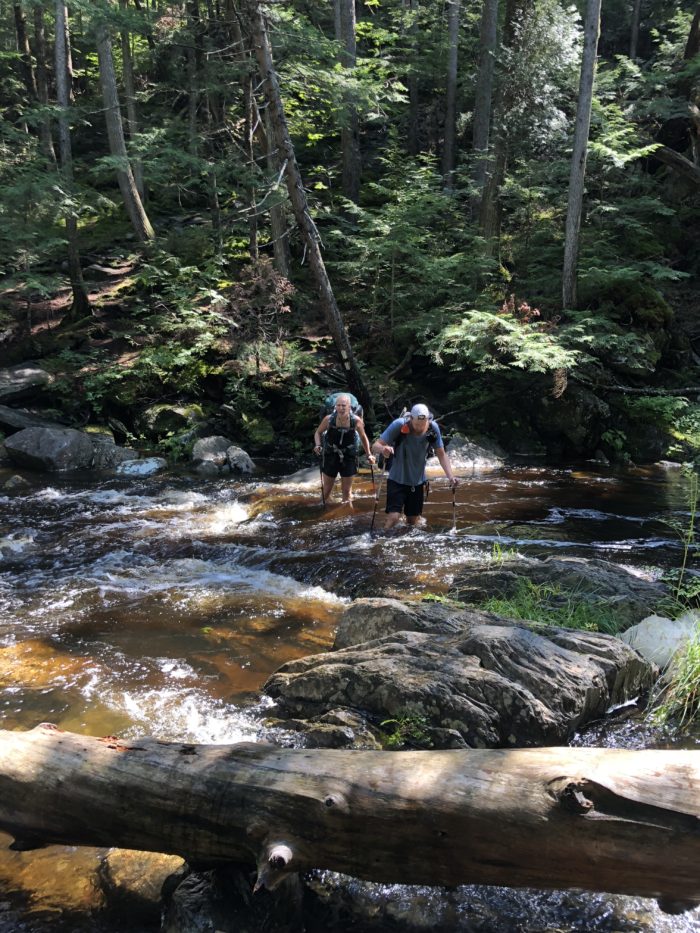 Gravity and Double-Tap on one of many fords.

Fortunately we had already planned a 30-mile day for day three of the wilderness.  Kenya, Gravity, and I wanted to do a 30 just for pride and we picked day three expecting favorable terrain with lighter packs.  Light packs or not we started 13 miles farther south than we planned so instead of flat terrain we had to start the day by climbing West Peak, Hay Mountain, and White Cap Mountain.  After completing those climbs it was easier except for a small climb up Little Boardman Mountain, just 1,980 feet of elevation.  The climb was steeper than I thought and because I was expecting an easy segment I had a rare moment of trail rage.  I was pissed at the trail for being so steep, rocky, rooty, and muddy when this was supposed to be some sort of victory lap to Katahdin.  Easy Pete wasn’t taking it easy.

I was saved by a thunderstorm, of all things.  Sure enough, at my low moment the skies clouded and thunder began to rumble.  Soon rain began to fall.  Somehow this snapped me out of my funk.  I started laughing, hooting, and hollering.  At one point I taunted the storm yelling, “Is that all you got!” after each thunderclap.  My morale soared and amazingly the storm passed.  We kept hiking and made 30.3 miles.  Thru-hiking really is a mental exercise.  Of course, at the end of the day this helped: a clear view of Katahdin.

“Life isn’t about waiting for the storm to pass.  It’s about learning to dance in the rain.’ 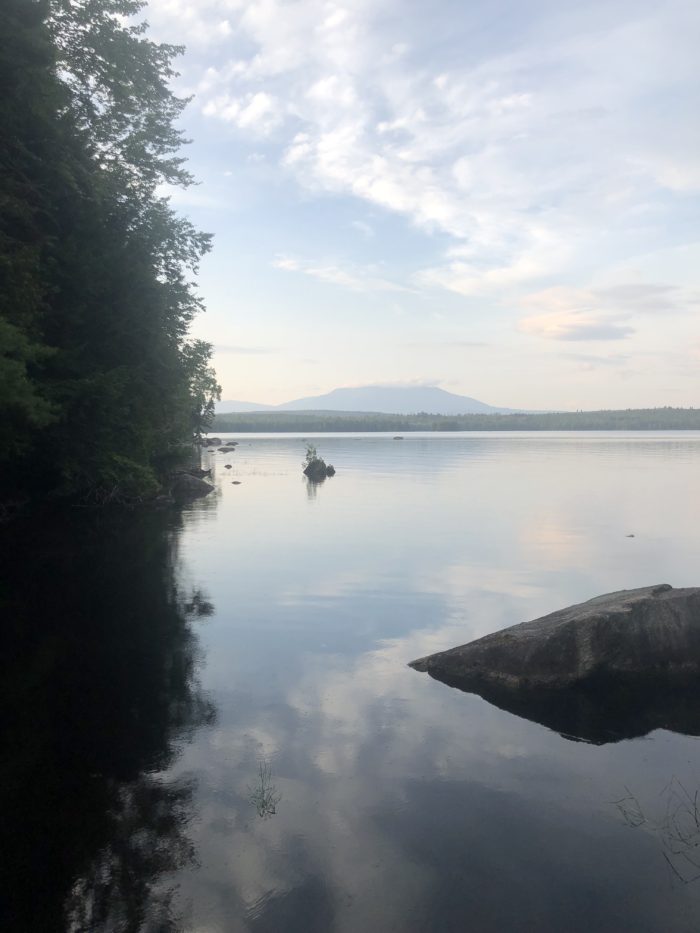 On day four we hiked a solid 23.5-mile day and knew we had this made.  The next day we woke up, ate our final calories, and walked out of the wilderness to Abol Bridge campground.  It was a magic moment.  Many friends had bunched up there and we enjoyed morning beers and a shared sense of accomplishment and camaraderie.  After a good rest, meal, and beer we walked into Baxter State Park and camped at Katahdin Stream Campground.  More tramily were here, including my longtime hiking partner and friend Irish Paul.  It was surreal; only 5.2 miles remained.  But I wasn’t going to summit the next day. I had other plans. 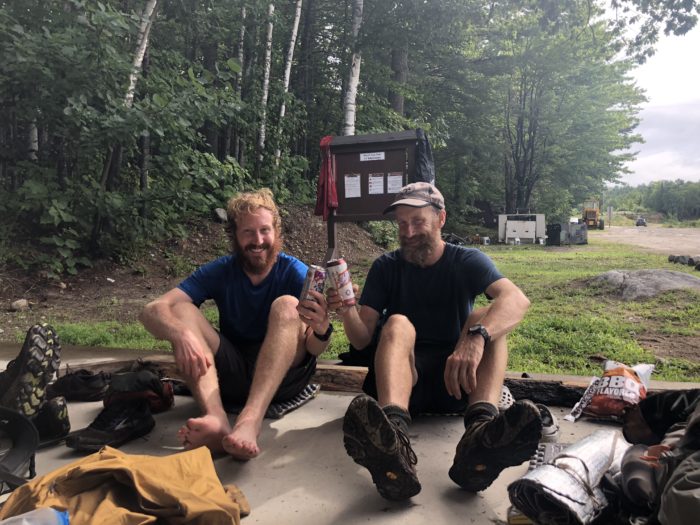 Kenya and me celebrating after completing the 100-Mile Wilderness.

The next morning while Kenya, Gravity, Irish, Quesadilla, and others prepared to summit I hitched a ride into Millinocket, picked up a mail drop and booked a room.  It was Friday and I didn’t plan to summit until Monday with my son Nick and two other friends, Patrick and Mike.

Nick and I had been planning to summit together for a long time.  Patrick and Mike were fellow veterans who worked for an organization I belong to, Team Red, White, & Blue, or Team RWB.  Team RWB is a nonprofit veterans service organization dedicated to enriching veterans’ lives by connecting them to their communities through social and athletic events.  I’ve been a member for years and was even a chapter captain in Pensacola. A few weeks earlier another Team RWB friend and leader, Donnie, reached out to me and asked if I’d be interested in combining the finish of my hike with a national event, the Old Glory Relay, or OGR.

The OGR is an annual event where a single American flag, Old Glory, is carried by runners, walkers, and bikers, from coast to coast.  In 2018 the relay will be from Boston to San Diego.  Officially the relay begins on Sept. 11 and ends on Veterans Day.  During this cross country journey thousands of participants will carry the flag through hundreds of communities, making countless connections.  The event is high visibility and embodies the spirit of Team RWB, connecting people with a common purpose.  Before the relay begins the same flag travels the world as a preamble, making this a global event.  The mail drop I picked up in Millinocket contained Old Glory, sent from Fairbanks, AK.  The termination of my hike would become a piece of this larger effort to improve veterans’ lives.  A part of my hike would live on beyond Katahdin.

Why a Cause Now?

I didn’t start this hike for any cause or person, I started this hike for me.   Raising funds or promoting awareness didn’t interest me.  My previous entries tell how I felt battered and a little broken by life.  When you fly on an airline the flight attendants instruct you to put your oxygen mask on first before assisting others.   This hike was about putting on my own oxygen mask, taking care of myself, so I set out alone.

Of course, I didn’t stay alone on the AT very long.  I met people on day one who became familiar and then became friends.  Next these friends became family.

Over the months and miles I felt slow, subtle changes come over me.   I found healing, peace, and acceptance.   No miracles, just a steady progression toward feeling normal again.  Certainly the trail’s beauty, the constant exercise, and time to reflect helped immensely.  But the connections I made with my fellow hikers, with our shared purpose, accelerated the healing and laid the foundation for a successful transition to a new chapter in life.

Finally, on Monday, Aug. 13, Nick and I arrived and met Patrick and Mike at Katahdin Stream Campground.  It didn’t seem possible this was the final day.  We took a picture, folded the flag, and proceeded up the Hunt Trail. 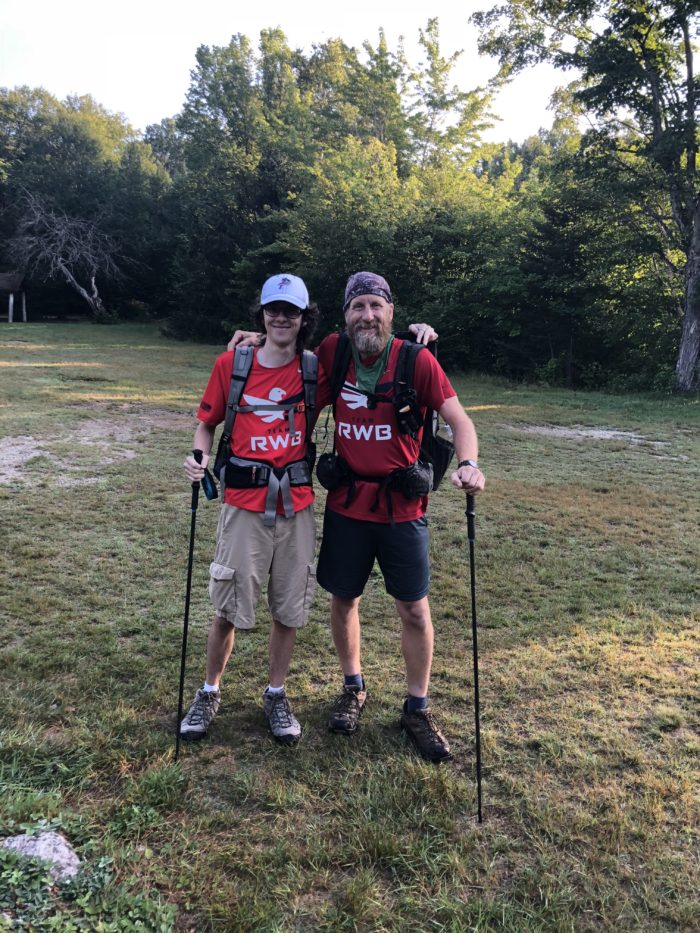 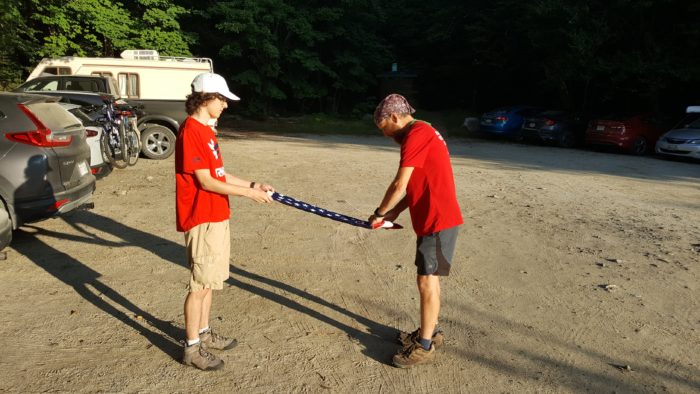 Prepping Old Glory for the ascent.

The 5.2-mile climb was an eye-opener for my companions; there were several steep sections and rock scrambles.  I didn’t mind pausing during the ascent.  I wanted to savor this day, the last day of a lifelong dream. 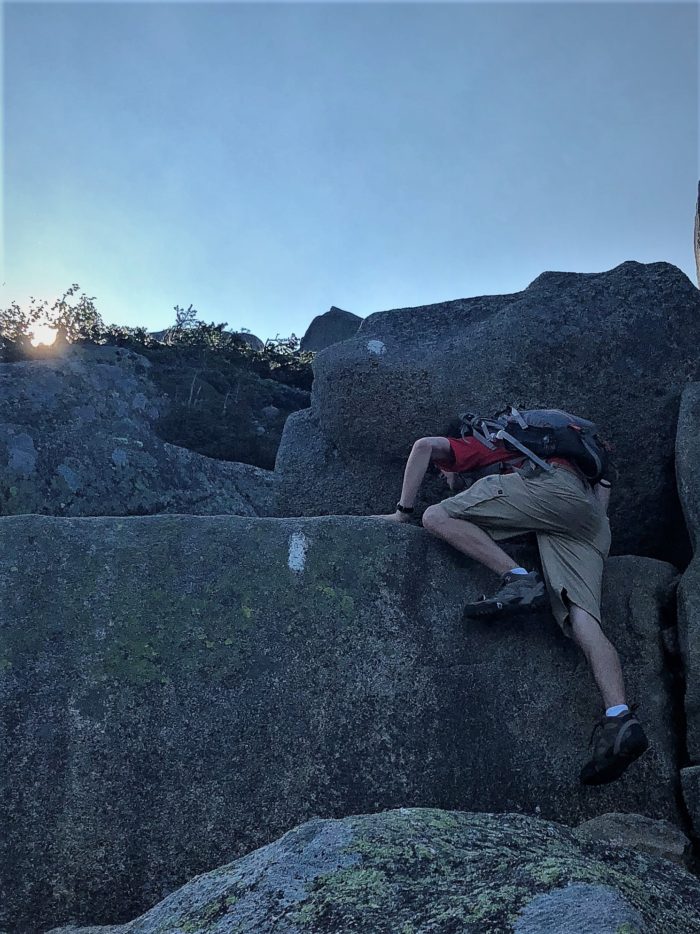 One of many rock scrambles. 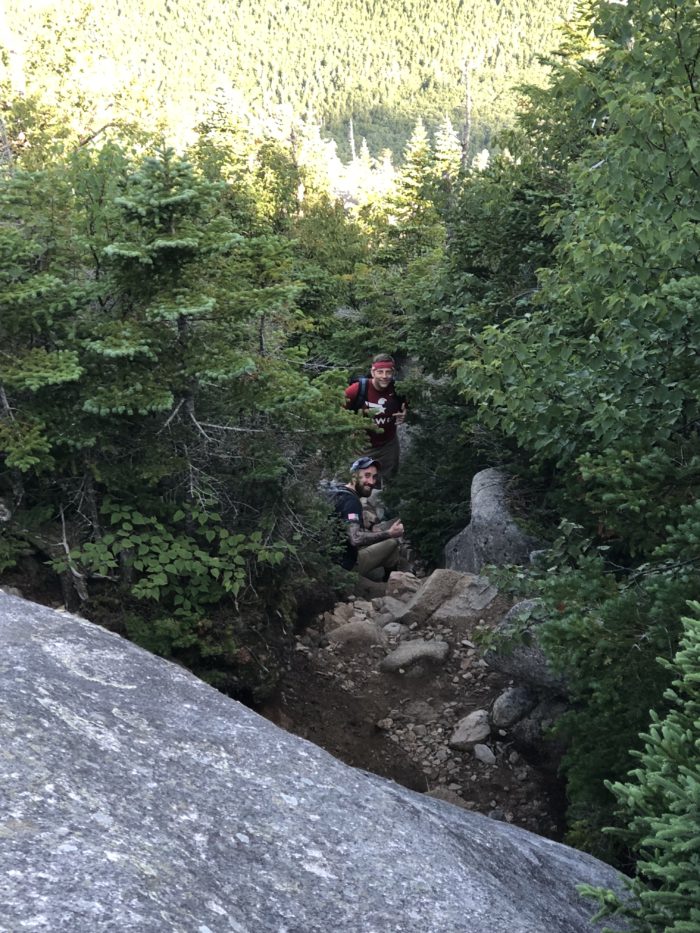 Patrick and Mike emerge from the treeline. 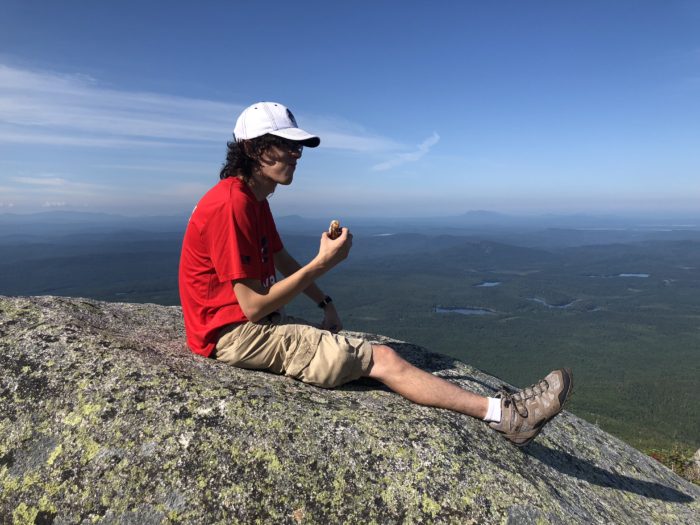 Eventually we arrived at the summit.  I can’t adequately describe everything I felt that day; emotions were churning in my mind.  Waiting my turn at the sign, I knelt in silent prayer and then spoke to Brenda.  I told her I felt her presence, I loved her, I missed her, and wished things were different, but accepted that they couldn’t be.  I renewed my promise to watch over the boys and keep living. 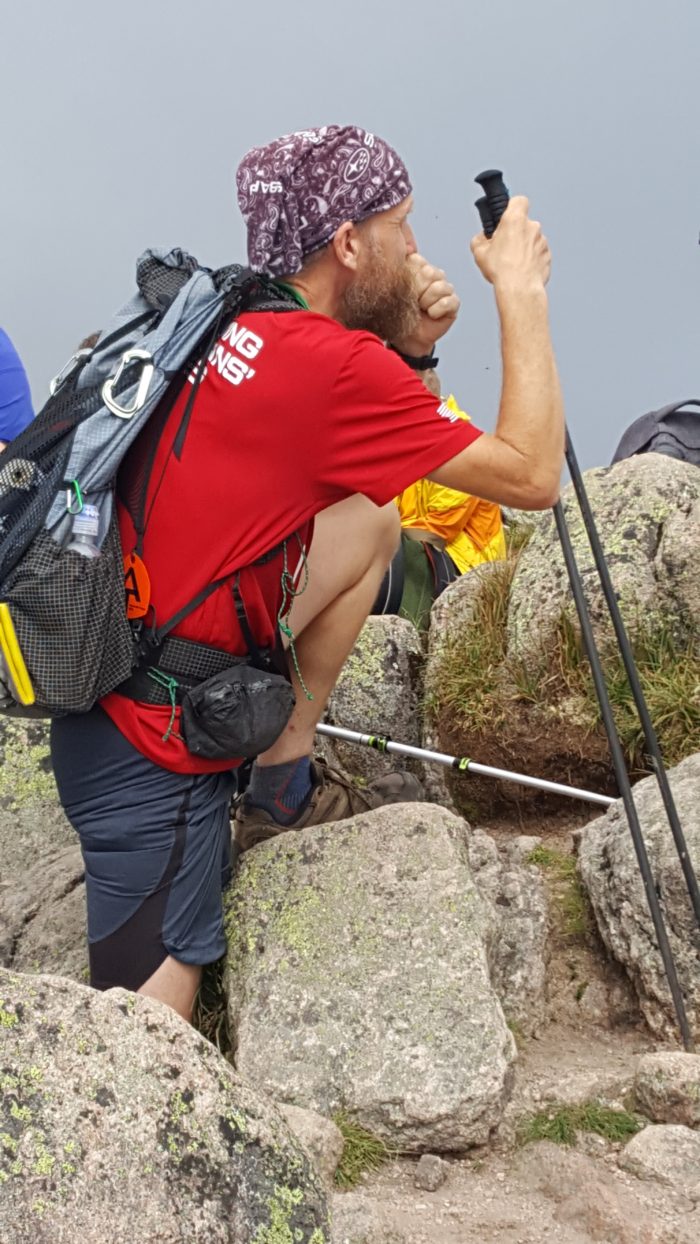 Reflection and prayer time waiting my turn. In my left hand is the Guardian Angel coin in the final picture.

Then it was my turn to approach. 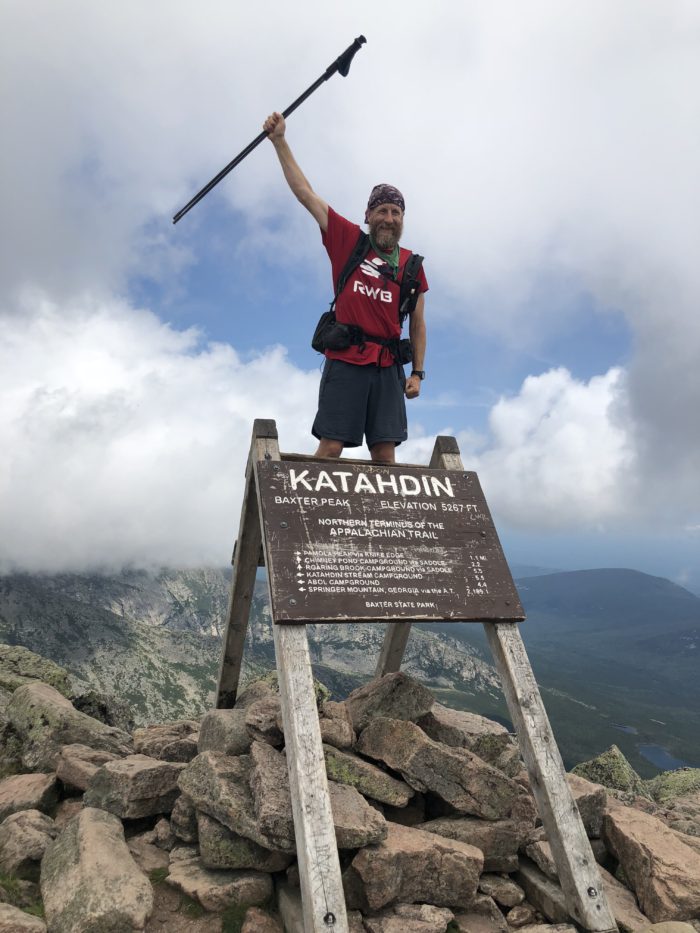 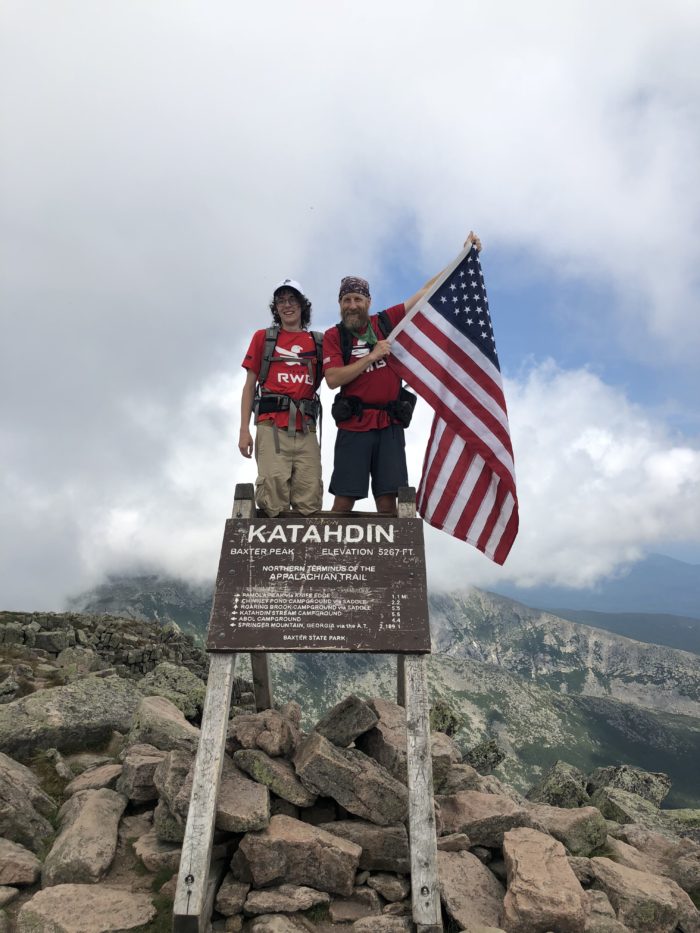 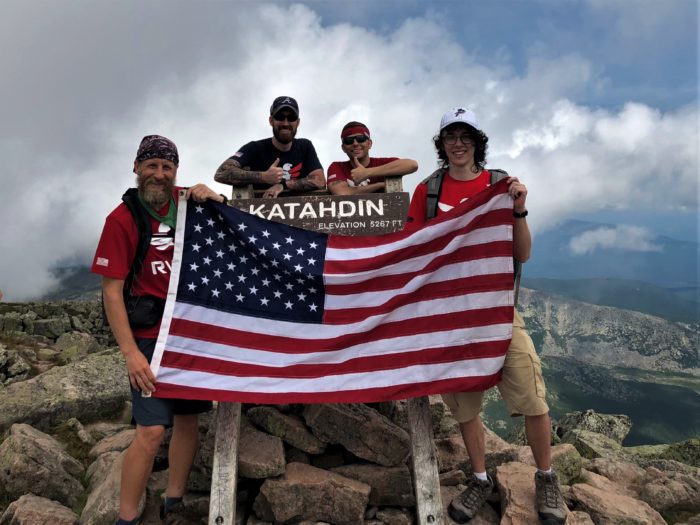 Me, Patrick, Mike, and Nick. 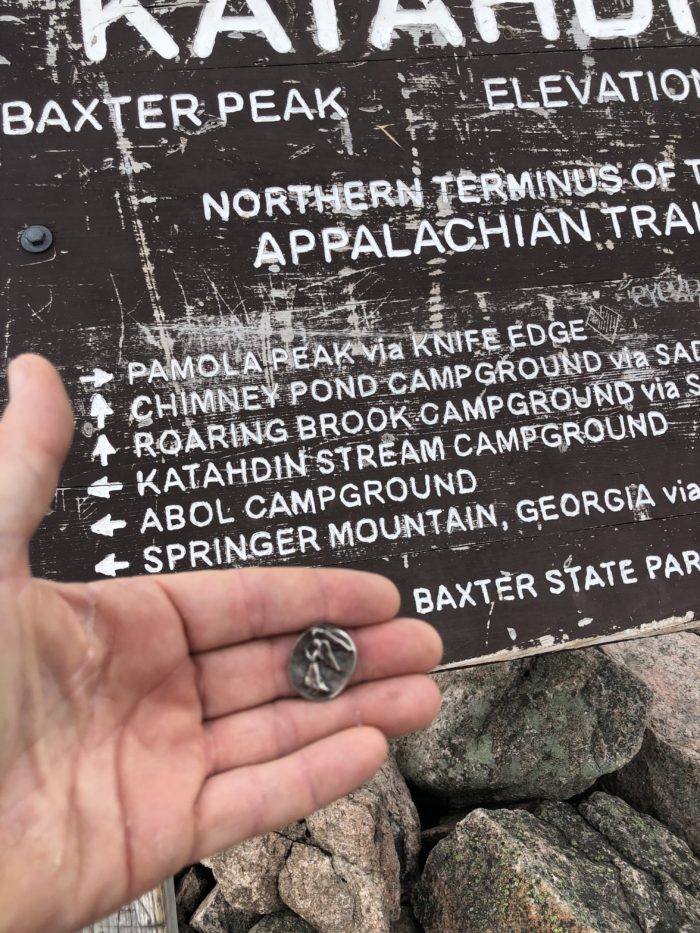 Years ago Brenda gave me this Guardian Angel coin to take on overseas deployments. I carried it on every deployment and flight I took. After she passed, in my mind it came to represent her watching over me. I carried this coin on every step of the AT to remind me of her presence.

The Hike Is Over but not the Story

We made our way carefully down the Abol Trail and to our cars.  We had a final beer and goodbye in the motel bar and then Nick and I made our way home to Duluth via Bangor and Boston.  The story doesn’t end here; in so many ways it’s only begun.  This won’t be my last post. I’ve been thinking a lot about what this all meant and what happens next.  Some of my post-hike plans are already in play, others haven’t revealed themselves yet.  I have a lot of people to thank and thoughts to pass.  Please stay tuned. 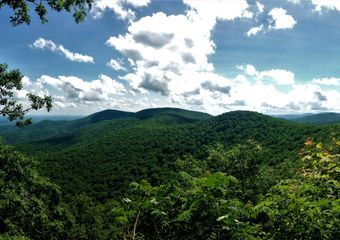