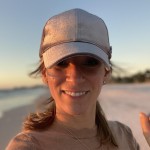 Appalachian Trail: Power of Nature, Humanity of It All, What Else I Would Rather Do

Why is everyone so worked up over the Smokies? Some hikers skipped the Great Smoky National Park all together and fast-forwarded to Hot Springs, NC instead. But, does that count as thru-hiking? 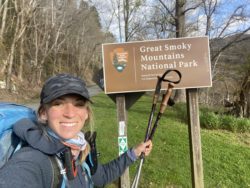 I’ve hiked these mountains before and they were beautiful. What is all this anxiousness I sensed from all the other hikers? I just marched right into the national park and crammed my permit into the AT Thru Hiker box—excited that I was back to this majestic terrain again. 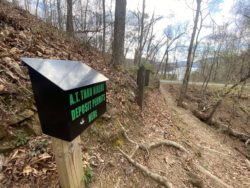 $20 Permit to Backpack In The Smokies

Exactly one hour into my hike, the blue skies quickly turned to gray. I dug out my rain jacket and covered up my pack. I was ready for the drizzle. Suddenly, a gust of icy wind blew across the trail. Here comes the rain, I thought. But it wasn’t rain that fell from the sky. Snow flurries flew sideways as I walked right into a snowstorm. 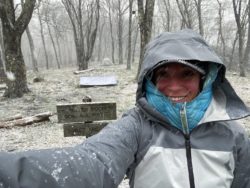 Strangely, I hadn’t seen another hiker in hours, but that wasn’t so unusual. Certainly there were people somewhere right behind me. They always are. I shook off the uneasy feeling of being totally alone and kept moving forward, keeping one eye on the clouds that seemed to be getting darker and one on the steep climb up. I hoped I wasn’t the only hiker heading into the snowstorm. 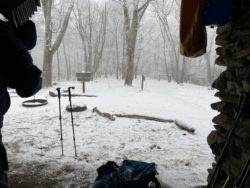 I walked through slushy wet snow, standing ice-cold water, thick mud, and wet leaves. My feet were soaked. My toes were cold, freezing actually. As I stopped to eat a snack, my toes went numb as did my fingers, and shortly, my entire body felt eerily cool. I kept moving up the mountain, snow covering the trail. I took one step and then another. My trekking poles left holes in the sticky snow on either side of the trail. I wondered if the standing puddles would turn into ice in the morning. 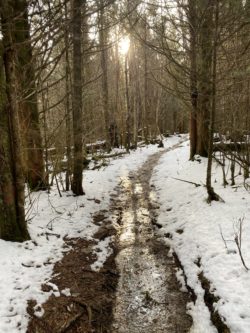 Would I rather be doing something else right now? I examined this thought as I slowly made my way up—seven miles behind me and six more ahead. Snow was now dumping all around me. The trail still felt like it mostly went up. I hardly noticed the descents.

The halfway points are the hardest. The fatigue takes hold. I try to distract my tired body with thoughts of food that I will eat for dinner from my food bag. But, my mind returns to the distance left between me and camp. I looked at the FarOut app again. Two more miles? That will only take another hour.

The stream of thoughts continued to swirl in my tired head. Where will I camp tonight? Will there be enough flat spots? How will I find them in the snow? Should I set up my tent or curl up next to strangers in a shelter? 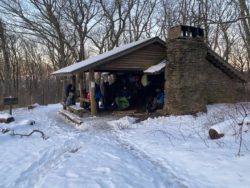 Shelter in the Snow, Our Sanctuary from the Cold

Two tarps were tied with ropes in an attempt to block the open wall of the shelter—trapping a smidgen of the warmer air inside and blocking an occasional snow gust from covering hikers in flurries. Frozen water bottles and filters lay in assortment across the wooden benches, along with frozen shoes and socks. Everyone was defrosting or drying something out.

Fire blazed inside a stone fireplace built into our shelter. We all took turns collecting firewood in the snow and feeding our fire. It was a full time job, but the discomfort of the cold kept everyone motivated to keep the fire going.

More newcomers stumbled into the shelter. Steam rose from their sweat-drenched clothes as they sat near the blazing fire. Hats, midlayers, gloves, socks, and boots steamed in unison as water evaporated near the dry heat of the flames. 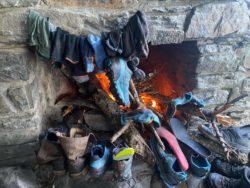 Socks and Shoes Drying By The Fireplace

As the night fell, the warm glow from the fireplace sent shadows dancing across the three stone walls of the shelter. It was our only source of heat, and temperatures dropped into the teens. The white snow gave off its own luminescence—majestic and silent, an even indigo glow. The white absorbed and reflected the deep blues of the darkening sky.

As the storm passed, the mountains stood in silence. The temperature dropped lower as the clouds lifted. The stars twinkled in the enveloping darkness of the approaching night. The scraggly silhouettes of bare trees watched us huddle together for warmth.

As we clustered around the blazing fire, I couldn’t help but feel that there was something primitive about this experience. We were stripped of titles, professions, education levels, income statuses, genders, and races—we were at our very basic human core—our raw, vulnerable selves trying to survive the freezing temperatures we weren’t prepared for on this trip.

Cigarette smoke filled my nostrils. Marlboro. Half of the patrons smoked near the fire. The cold air transferred the smoke across the shelter, seeping into every nook of our sanctuary. I could smell it through my sleeping bag.

The last two nights were too snowed in and too cold to sleep in my own tent. We had all crammed into the smoke-filled shelters for warmth. It was the safer, warmer option.

Rhythmic sounds of snoring—hard and soft, fast and slow—surrounded me like the varied sounds of an orchestra. Sixteen strangers slept side-by-side, cocooned in their sleeping bags.

Someone shuffled in their sleeping bag sending a crinkling sound across the shelter of an inflated sleeping pad adjusting under the shifting weight. Someone coughed. Someone cleared their throat. Someone mumbled something incoherent in their sleep. The shelter was like a living organism—breathing, wheezing, and shuffling.

By 6 am, the collective of strangers was tossing and turning, sounds of nylon rustling and zippers coming undone filled the cold air. Muffled voices greeted each other in the dark hour of the early morning. We made it through another night. 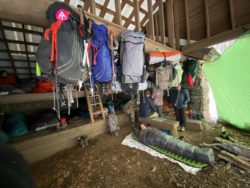 I was in a group of 20 hikers who were leapfrogging each other through the snowstorm. We joked about the weather and the strenuous conditions of the trail, but there was an edge to the laughter. We were acutely aware of the real dangers that each of us faced. Hypothermia was waiting around every corner, and everyone was sporting wet shoes, soggy socks, damp shirts, and cold feet and hands. We were braving the coldest temperatures on the trail yet.

The sun slowly warmed up the day. The freshly fallen snow melted right before my eyes. Patches of brown earth started to emerge again. I stepped with care through knee-high snow drifts. Luckily, other people hiked the trail right before me. I tried to walk in their footsteps. Someone slipped there and fell through the snow here—the footprints told a story of someone else’s journey. I attempted to avoid their mistakes, adding my own story to the trail.

When there’s no wind, the sun feels warmer than what my Garmin says the temperature actually is. Maybe my mind was just playing tricks on me,  but my layers came off quickly on my way up another steep pitch. 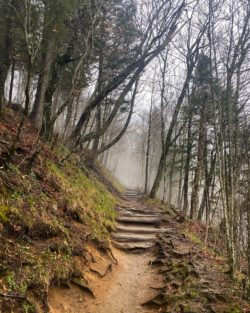 Fog On The Trail

The morning sun lifted the dense fog from the trail before me. It floated sideways and away right before my eyes, like hot shower steam that rises above the shower curtains, bringing every tree into a sharp focus.

With the fog gone, I noticed details I didn’t see before—the distant mountains through the trees, the thickness of the forest surrounding me, and the green underbrush trying to emerge from the winter months.

Sounds, loud and faint, carry across the mountains. I hear an owl hooting in the distance and a woodpecker pecking away—tap, tap, tap, tap, tap. An occasional grouse will puff up in a mating call. I hear other birds too, smaller birds—chirping away in my presence as they warn each other that danger is approaching. I almost never actually see them, but their presence is always known.

A majestic hawk swooped past me, carrying food in its beak, undisturbed by my presence. And I just walked…and listened. The sounds of the forest filled my ears and soul—it’s a live melody that changes with every step. The mountains are alive and they are telling me their story.

It can get quiet in the dense forest too, the wind doesn’t reach the valleys through the tall trees. I can only hear the gusts swooshing high above me. They sound like an ocean, like waves crashing in the far distance. An occasional breeze sends a chill down my back, but it’s a refreshing touch as I climb up and down the steep pitches, sweat pouring down my back.

All around me I feel the power of nature, I see its beauty and fury, and it makes me aware of my own small presence in the vastness of this universe. 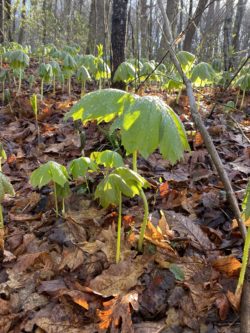 Spring is bursting through the last cold days of winter. I spot it everywhere—the green blades of grass poking through the dead leaves and patches of snow, the coiled green stems of emerging plants ready to stretch out, and the reddish buds on every tree branch waiting to burst into leafy greens.

As I drop down to 3,000 feet, wildflowers hug the trail like a colorful rug—blue, purple, yellow, and white petals are splashed across the brown ground in patches of green. Everything is eager to be alive, find warmth, and soak in the sun. 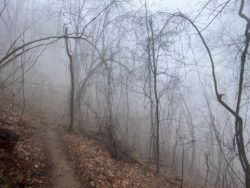 Rain and Fog Transform The Trail

It’s mid-April and the ground is still covered in a thick blanket of brown leaves and melting snow. Raindrops and snowmelt transform the trail into a soft mush of slippery mud. It feels like walking on a soapy sponge. Each step is carefully planted. Danger of slipping is ever present. My footwork is supported by two trekking poles, each strategically placed in secure crevices to avoid a misstep—yet, I still manage to lose my footing every tenth step, slide in mud, or trip on a hidden root.

Several hikers get off the trail to avoid the cold wetness. But, I find the drizzle alluring, another hiking experience to add to my adventure. April rain with a few rolls of thunder is just as interesting to me as the snowstorm and the sunny days on the trail. It is all part of living in nature and fully immersing in the Appalachian mountains.

The trail is different each day. No two days are alike. The terrain changes every 20 minutes or roughly every mile in North Carolina. I’ll walk through a dense underbrush of green rhododendron shrubs, quickly transition to bare oak trees, and then step into a dense forest of tall pines covered in moss, and then back to the rhododendrons again.

While the days seem long at times, the weeks are flying by, and I can’t think of another place I would rather be.

I’m an avid hiker, world explorer, nature enthusiast, and an artist by hobby. I spent my childhood summers mostly outdoors - hiking, camping, and swimming in frigid northern lakes. I’ve also traveled across the world from Thailand to Iceland, exploring nature and hiking hundreds of miles across mountains, forests and deserts. In my ‘indoor’ life, I am a marketing executive with a strong passion for strategic planning, data, consumer insights, and analytics. I am a creative problem solver in business and in the outdoors.