As a ridgerunner you answer the same questions over and over — it’s part of the job. I recall the questions I received during my 2016 summer as a ridgerunner, but I wanted more feedback so I asked my fellow Potomac Appalachian Trail Club (PATC) ridgerunners and here is what we came up with. 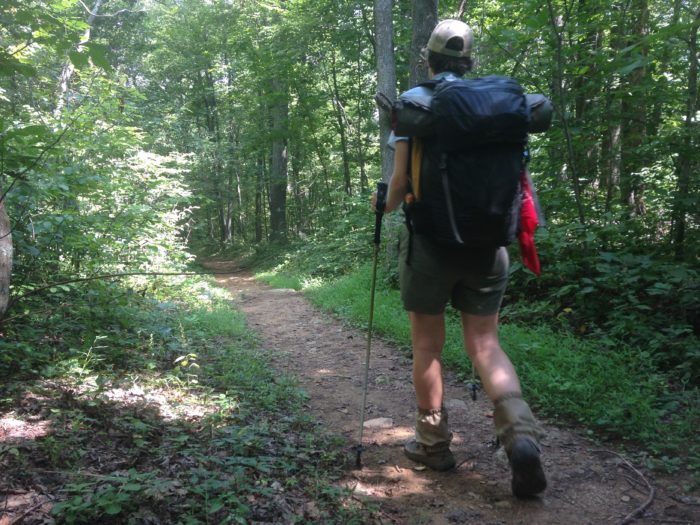 I understand. Run is in the name, but no, we don’t run. I’d say we mosey. One day it took me over four hours to just go four miles because I was stopping to talk to so many folks, pick up litter, and clip vegetation growing over the trail. The goal is not to get through the section as fast as possible but to make contacts with people and to observe the trail and your surroundings for litter, rogue campfire rings, and unestablished campsites. Plus, I’m carrying just as much as thru-hikers if not more so I don’t think it’s realistic or good for your knees to run with 30 pounds on your back.

What do ridgerunners do? 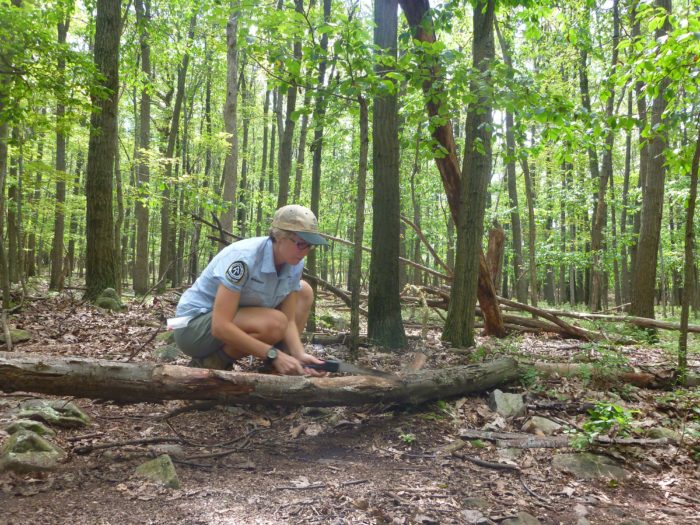 My job is to educate hikers on leave no trace ethics and help hikers by telling them about the weather, water sources, and trail conditions. I also help in maintaining the trail by cutting back vegetation, sawing smaller blowdowns, and picking up litter. “Knocking the cone” in the privies is not my favorite part of the job.

Did you go to school for this? What kind of training does this require? 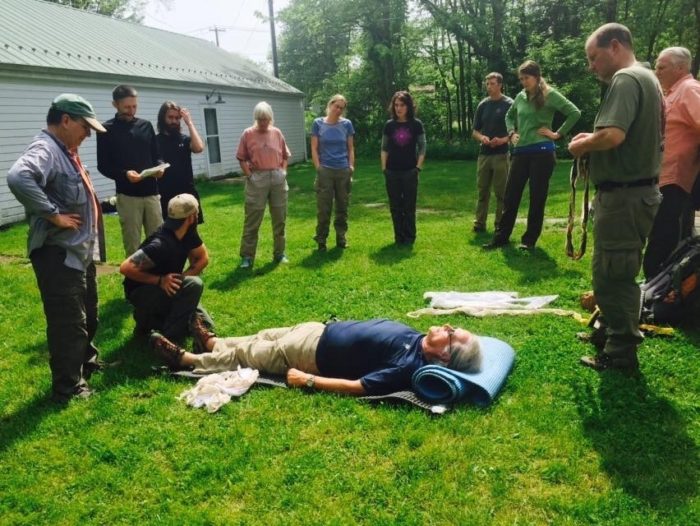 I did not go to school to be a ridgerunner although I have taken outdoor recreation and environmental related courses in undergrad and graduate school. My prior experience thru-hiking the AT, backpacking all across the country, and various other customer service type jobs prepared me for this role. As for training, we had a Leave No Trace trainer course, wilderness first aid class, and were given in-depth information about our specific sections before the season began.

Is this a paid position? Who hires you?

Ridgerunners do get paid (more than minimum wage) but shelter caretakers, trail section maintainers, trail patrol, and other volunteers do not get paid. The trail club associated with that section of the trail will most likely be the organization that hires you. There are 31 trail-maintaining clubs along the AT. I was hired by the PATC.

How much do you work and how long are you out for?

I personally worked ten days on, four days off, working eight-hour days. However, since I was camping every night and out on the trail 24 hours a day, I was basically working the whole day I was awake. That’s why I preferred to stay in my tent rather than sleep in the shelter, so I could have my own private area and be “off duty.” My fellow ridgerunners and most ridgerunners now work five days on, two days off. Then after your week in the field you compile reports that are sent to your trail club and the ATC.

Can you take out my garbage? 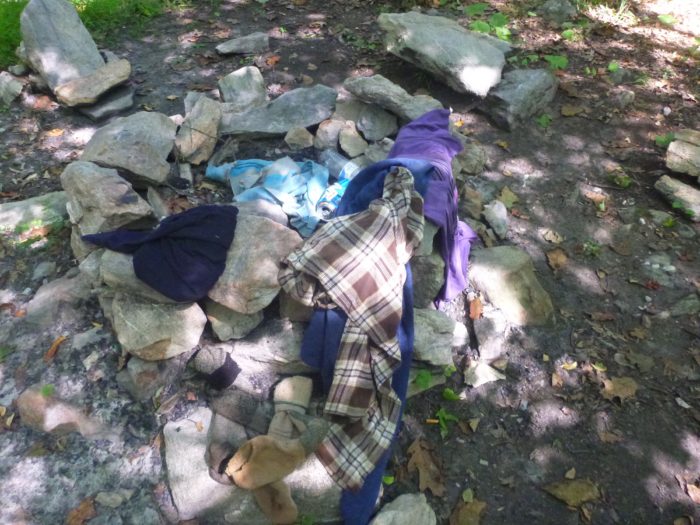 My fellow ridgerunners got asked this more often than I personally did, but the one instance I still recall of a hiker assuming that my job was to personally take his trash out irks me till this day. I was visibly carrying a large trash bag of junk I just cleaned out from a shelter and he asked if it was garbage and I said yes. Then he moved to hand me his trash and I quickly had to tell him I wasn’t carrying it because I wanted to. I told him to pack it in, pack it out. He turned abruptly and stalked off. Really? Yes, I pick up litter but if every hiker gave me their trash rather than taking care of it themselves I would never make it through my section due to the weight. Plus, keep in mind that I had to haul that trash either till the end of my ten days or whenever I came across a trash can, which when I’m going shelter to shelter and there is nothing at the road crossings, can be days.

Don’t you get scared working out here all by yourself? 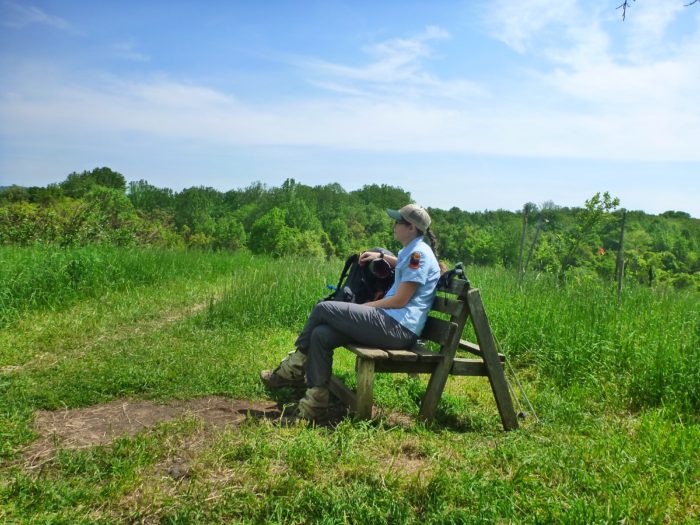 This question is probably directed more toward women ridgerunners. My answer: If I was scared working in the woods by myself I wouldn’t have pursued the job. I am not normally afraid when I’m on the trail or in the backcountry due to the confidence I have gained from all my experiences backpacking and spending time in wilderness areas. However, I would note that confidence should not be confused with being comfortable. In my opinion, I think it wise to always have a heightened sense of awareness of your surroundings as unexpected things can happen in a moment’s notice and the forest is not watching your back. For instance, there was a time when I became quite nervous about falling trees because I had been getting reports of trees falling on hikers’ tents during storms so I became much more aware of where I was setting up.

People are a whole other factor. As a ridgerunner, I did feel like a target sometimes; the patch on my shirt indicated I was different than the other hikers. I remember one instance in particular where I was the only one at the shelter and I was sleeping in my tent when someone approached and called out to me in the darkness. The hiker said that he was told a ridgerunner was waiting for him there at the shelter. He then proceeded to describe a negative encounter he had with a caretaker up the trail that made him very angry and upset. I instantly became wary and didn’t feel comfortable opening my tent to talk to him. I discreetly checked my phone but didn’t have service to call for help if needed. I eventually opened my tent flap to speak with him and tried to calm him down. The situation was unusual and most likely would have never happened if they didn’t know a ridgerunner was there, but he felt that it was OK to approach my tent at night. For me, though, I was acutely aware that I was alone and that things could have gone differently. 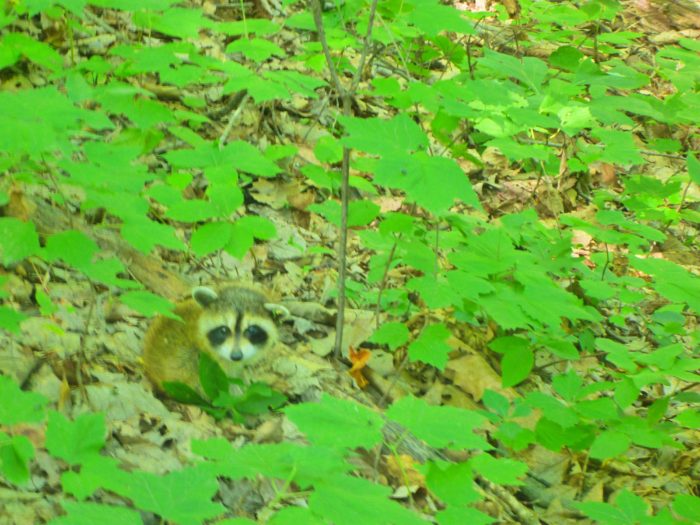 And then you get the questions about the most interesting, weirdest, or scariest thing you’ve encountered while on the trail. It makes sense. I encountered thousands of people during my summer as a ridgerunner hiking the same 58-mile section nine times, but sorry to disappoint, I don’t have any remarkably compelling stories to share from my one season as a ridgerunner. However, some of my fellow PATC ridgerunners who have been doing it for years could probably write a novel on what they’ve seen. One of my most interesting moments was seeing a baby raccoon right beside the trail (see photo above), probably the cutest baby animal I’ve ever seen. Then again, one of my fellow ridgerunners encountered someone going to the bathroom in a creek. The trail is full of surprises.

I've been ruined for normal existence ever since thru-hiking the AT in 2011. I find that I am never fully satisfied with life so I am always looking for a new challenge, adventure, or goal to work towards. Add my tendency for self-suffering and you've got the makes of a long distance hiker, cyclist, and rower. I've lived and worked all across the country, thru-hiked the Long Trail, Camino Frances, Annapurna Circuit, and Pinhoti Trail, biked the Natchez Trace and sections of the Arizona Trail, and rowed the Mississippi River from source to sea. I was privileged to give back to the trail as an AT ridgerunner in 2016. Happy Trails! For adventure travel posts, videos, and more check out my website: www.whereintheworldissara.com. Instagram @saratidewalker