Two hundred and eighty-two miles of adventure are sandwiched between New Hampshire’s Mount Success and Katahdin, the revered Northern Terminus of the Appalachian Trail. Many hikers consider Maine to be the AT’s crown jewel, and it’s easy to see why. Sparkling lakes; vista-laden summits and traverses; and prominent AT landmarks beckon hikers to the state. For most thru-hikers, it is either the climactic end or the tumultuous beginning to a life-changing trek. For section hikers, it’s an epic journey all in itself. Are you considering taking on all or part of the Appalachian Trail? Read on to discover why this section should be your Maine squeeze (see what we did there?). 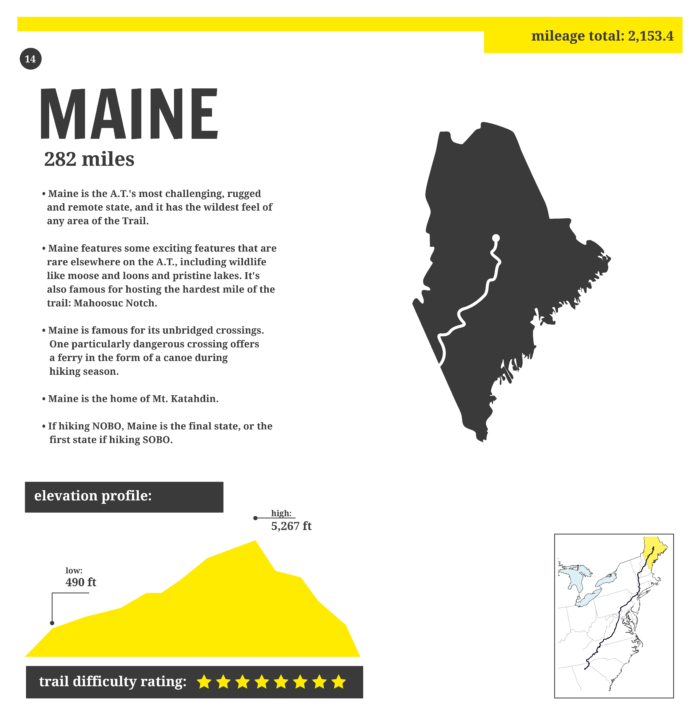 Maine is a state of extremes in every sense, including the terrain. Overall, this section is considered among the most difficult on the entire trail, and much of your time will be spent struggling up and down steep, slippery slopes, through alpine bogs, and across fast-flowing streams. The state is even home to Mahoosuc Notch, which is widely billed as the hardest mile on the Appalachian Trail. Yet there are some sections, like the Great Carrying Place and Baxter State Park, that make for remarkably easy walking.

The northern half of the section is generally considered flatter and less challenging than the southern half. However, rocks, roots, and environmental conditions can throw up roadblocks for unsuspecting hikers on even the most level stretches of trail.

Pro tip: for the best conditions possible, tackle this section in late summer. Streams will be lower and insect populations ought to be down, making for safer and more pleasant walking. 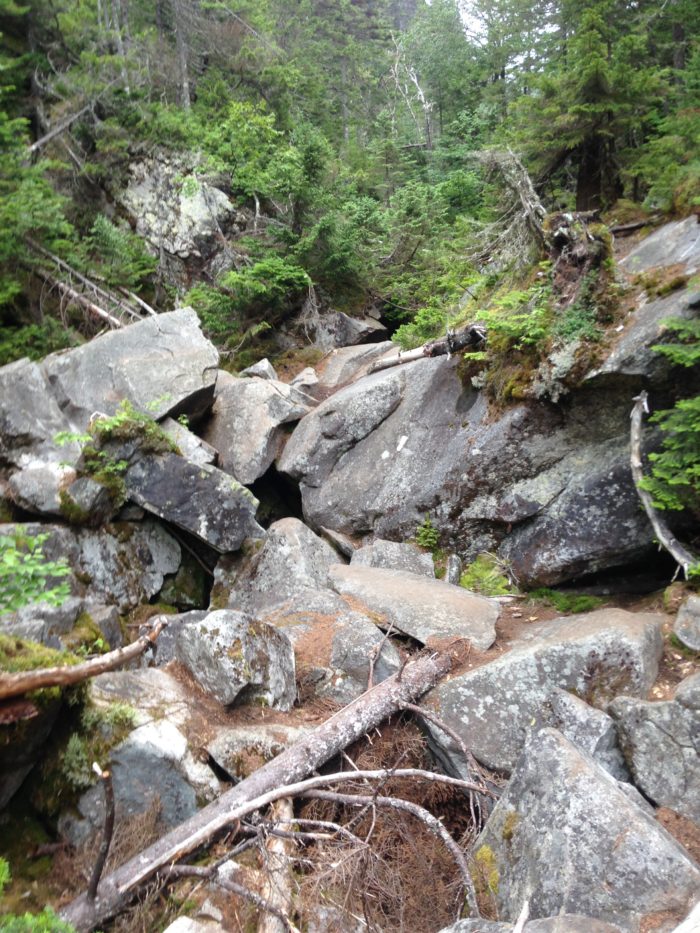 Yes, this is literally what the Appalachian Trail looks like entering Mahoosuc Notch.

Mahoosuc Notch is widely considered the hardest mile on the Appalachian Trail, but it’s also beloved by many hikers. Budget plenty of time to navigate this formidable obstacle. Mahoosuc Notch is a jumble of giant rocks with impassably steep valley walls rearing on either side. The only way forward is to pick your way over, under, and across the great pile of van-sized boulders until you regain solid ground a mile later. Pay close attention to your footing in this section. There’s no good time or place to get an injury, but remote and rugged Mahoosuc Notch would be a distinctly bad place to get hurt.

Fortunately, camping is available just south and north of the notch (Full Goose Shelter and Bull Branch Campsite, respectively). Many hikers camp right before the notch so they can tackle it with fresh legs in the morning. Others take on the challenge at the end of a long day of hiking and are grateful for the chance to collapse in camp on the other side. Once Mahoosuc Notch has been successfully navigated, northbound hikers will immediately tackle the challenging, slippery slope of Mahoosuc Arm (1,919.3). 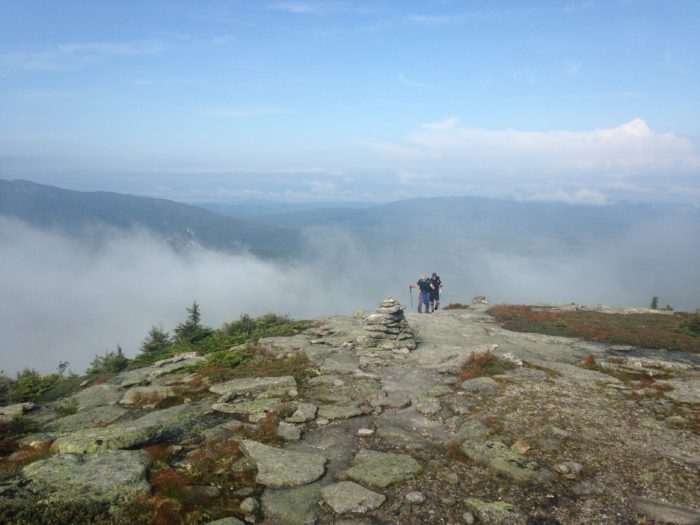 Aptly named Baldpate features spectacular views from a barren, round-headed summit. You’ll catch your first view of East Peak from its sister, Baldpate West, just a mile south on the AT. There’s a tricky ladder on the way down into the col between the two peaks, and then a steep, exposed climb up the slick bedrock slopes of East Peak. Up top, your lactic acid-inducing efforts will be rewarded by 360-degree awe-inspiring views. 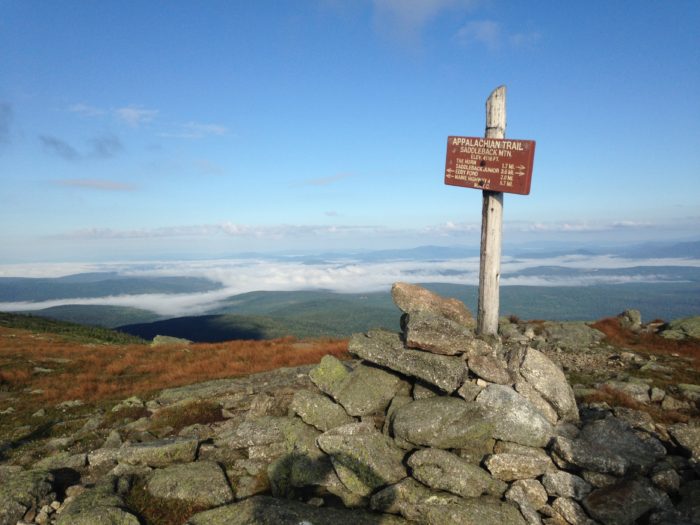 Get ready to get down and dirty with some serious rock scrambling as you traverse Saddleback, The Horn, and Saddleback Junior. This is fun, technical hiking at its best, with plenty of time spent above treeline and abundant views in every direction. 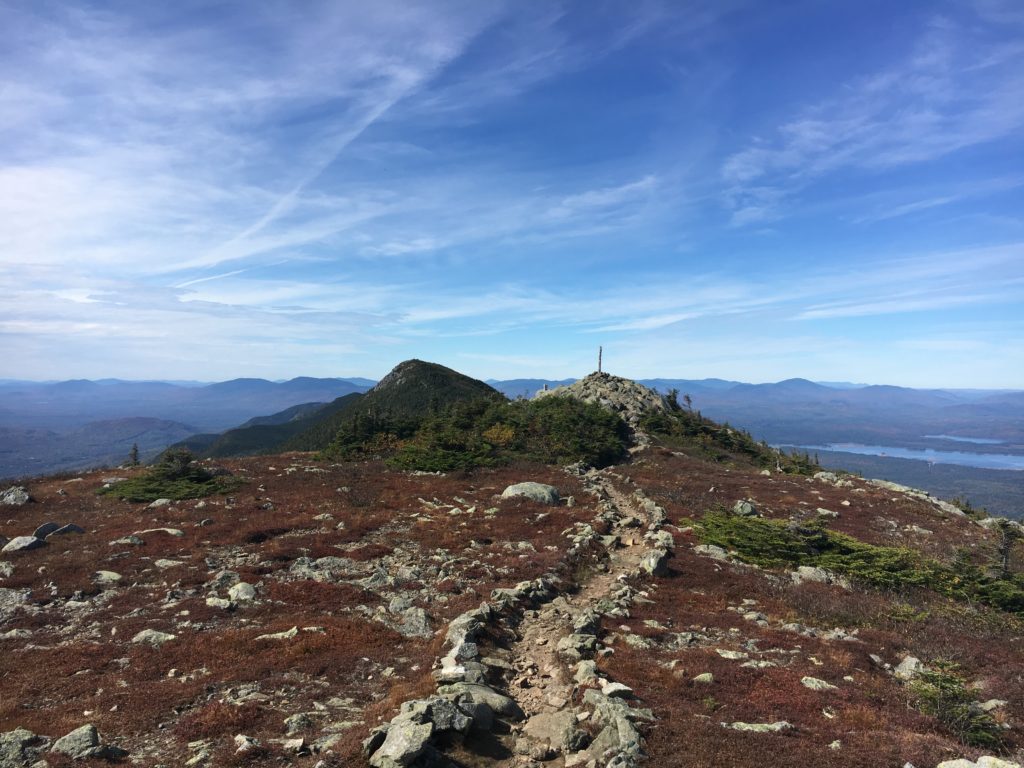 The smooth terrain on the north side of the Bigelow Range promises a respite from Maine’s usual crushing difficulty—but you have to get over the Bigelows first. The exposed spine of Bigelow Mountain will take you across several formidable peaks. These include South Horn, Bigelow West Peak, Avery Peak, and Little Bigelow. 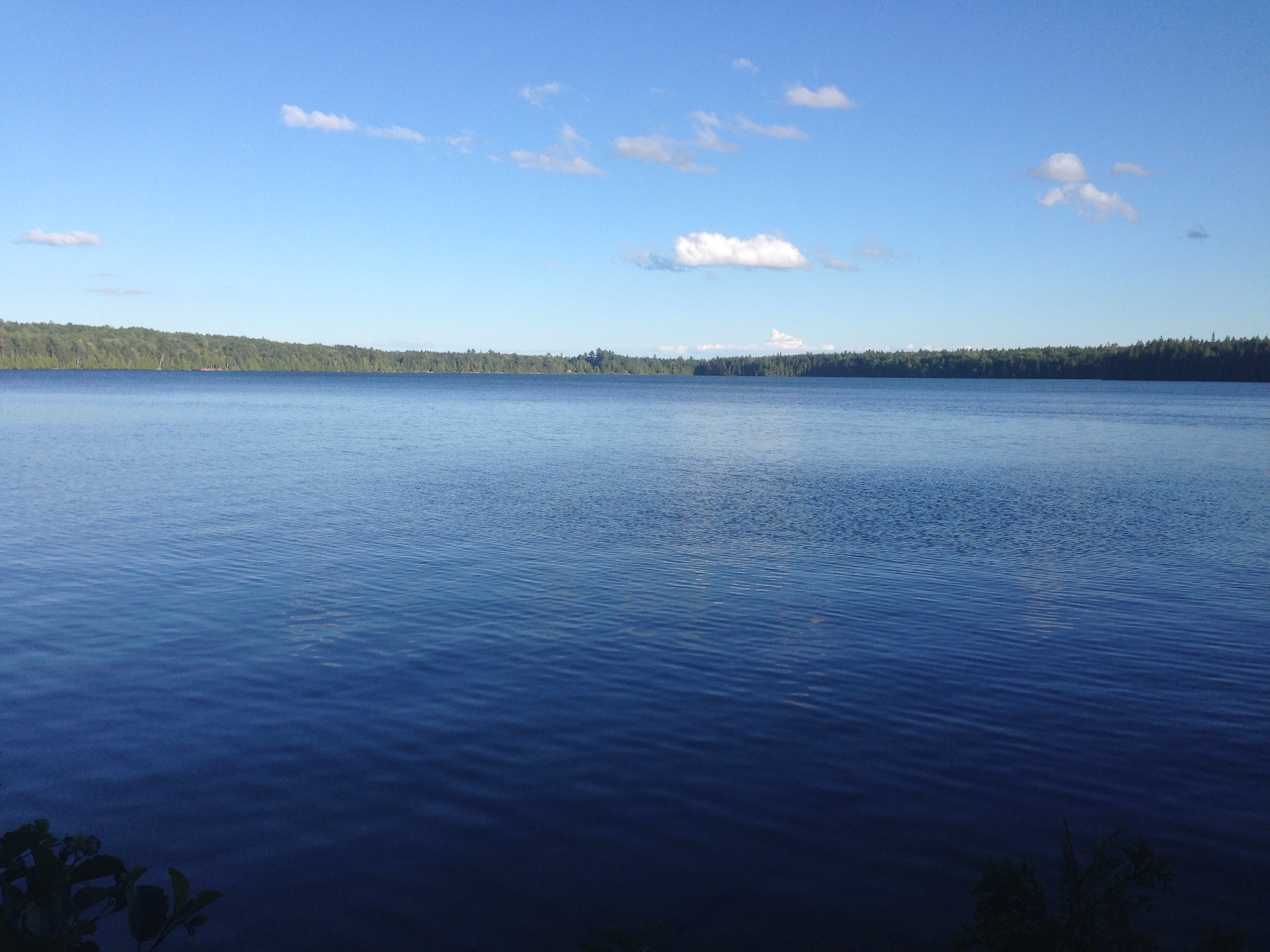 This 13-mile orange-blazed trail follows the footsteps of Colonel Benedict Arnold on his failed 1775 march on Quebec. The AT briefly joins up with this trail between Middle and West Carry Pond. Even if you’re not a history buff, you’ll still love this stretch for the picturesque and eminently swimmable carry ponds. 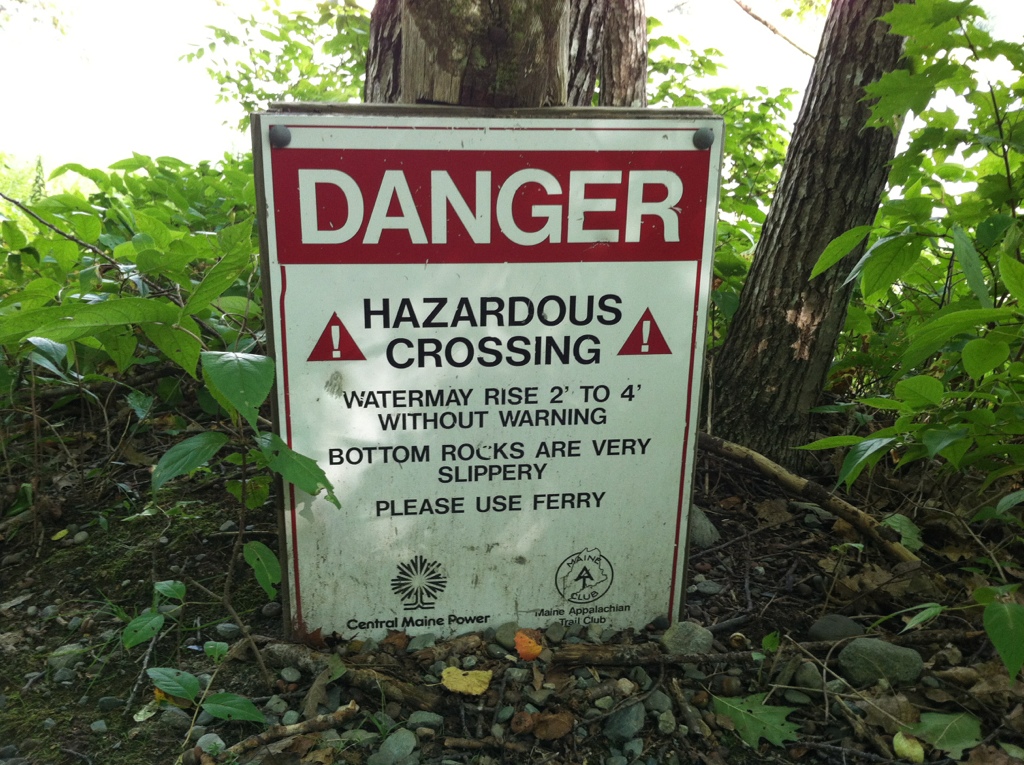 The Appalachian Trail might be a footpath, but in at least one small section, the officially sanctioned mode of travel is not on foot—it’s by boat. The wide, swift, and unpredictable Kennebec River is dangerous to ford. Therefore, the Maine Appalachian Trail Conservancy operates a ferry in order to see trail users safely to the other side. The ferry can only take two passengers at a time and has limited operating hours, so plan to arrive early in the day if possible. This will reduce your chances of getting caught in a bottleneck. Once across, make sure to stop in at the Caratunk House Hiker B&B on the north bank of the Kennebec for a celebratory pulled pork sandwich and milkshake. 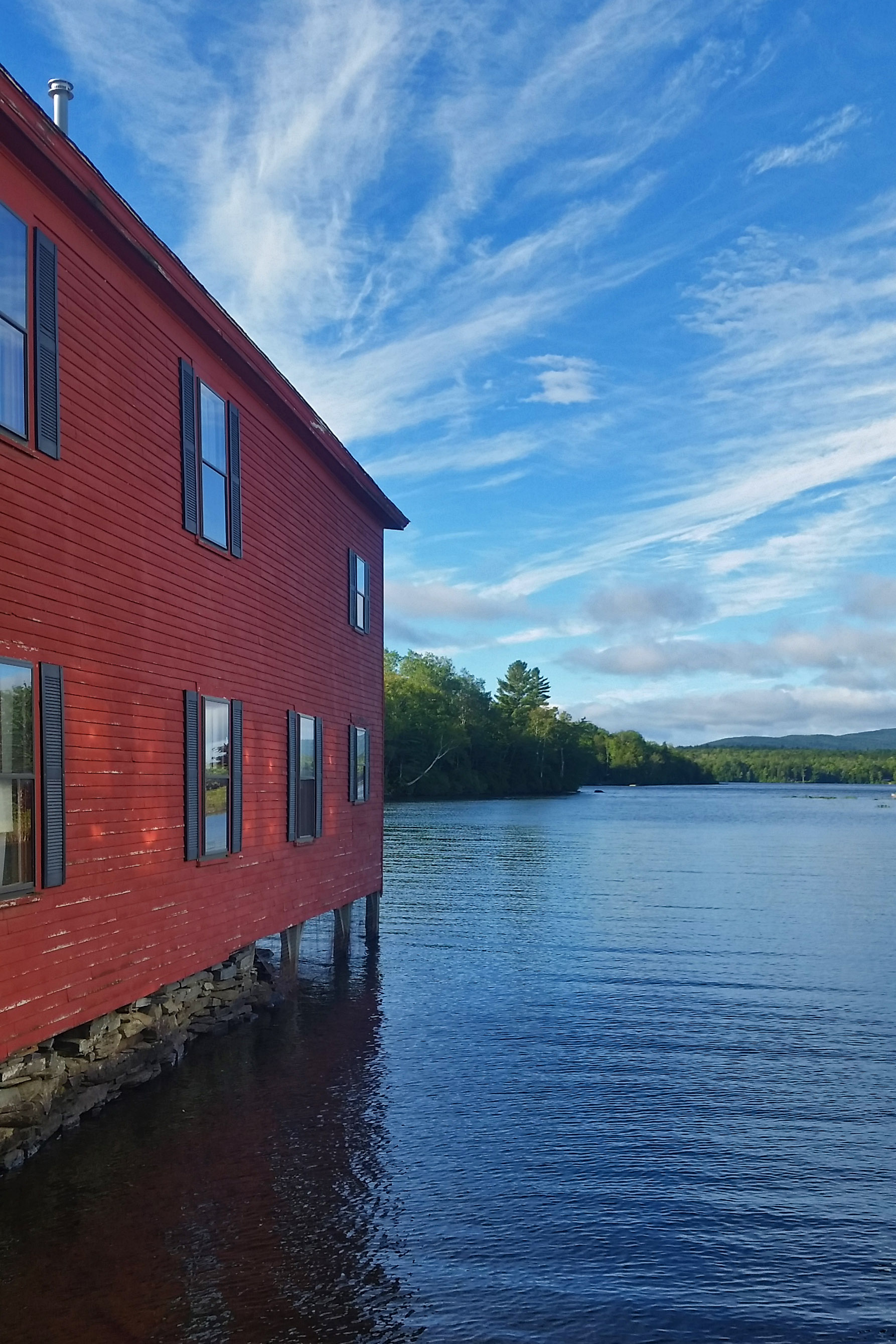 Monson marks the southern end of the remote 100-Mile Wilderness, so nearly all hikers stop here to rest and refuel. If you need food, lodging, gear, resupply, or shuttle service, Shaw’s Hiker Hostel is the place for you. The friendly folks at Shaw’s even offer food drops in the 100-Mile Wilderness. This is a major boon for weight-conscious hikers contemplating a lengthy food carry. If you’re in need of information about the 100-Mile Wilderness, Baxter State Park, the Kennebec, etc., it’s also worth checking out the AT Visitor Center. The staff keeps a voluntary registry of northbound thru-hikers’ planned summit dates. This is useful information if you’re planning ahead for your own summit. 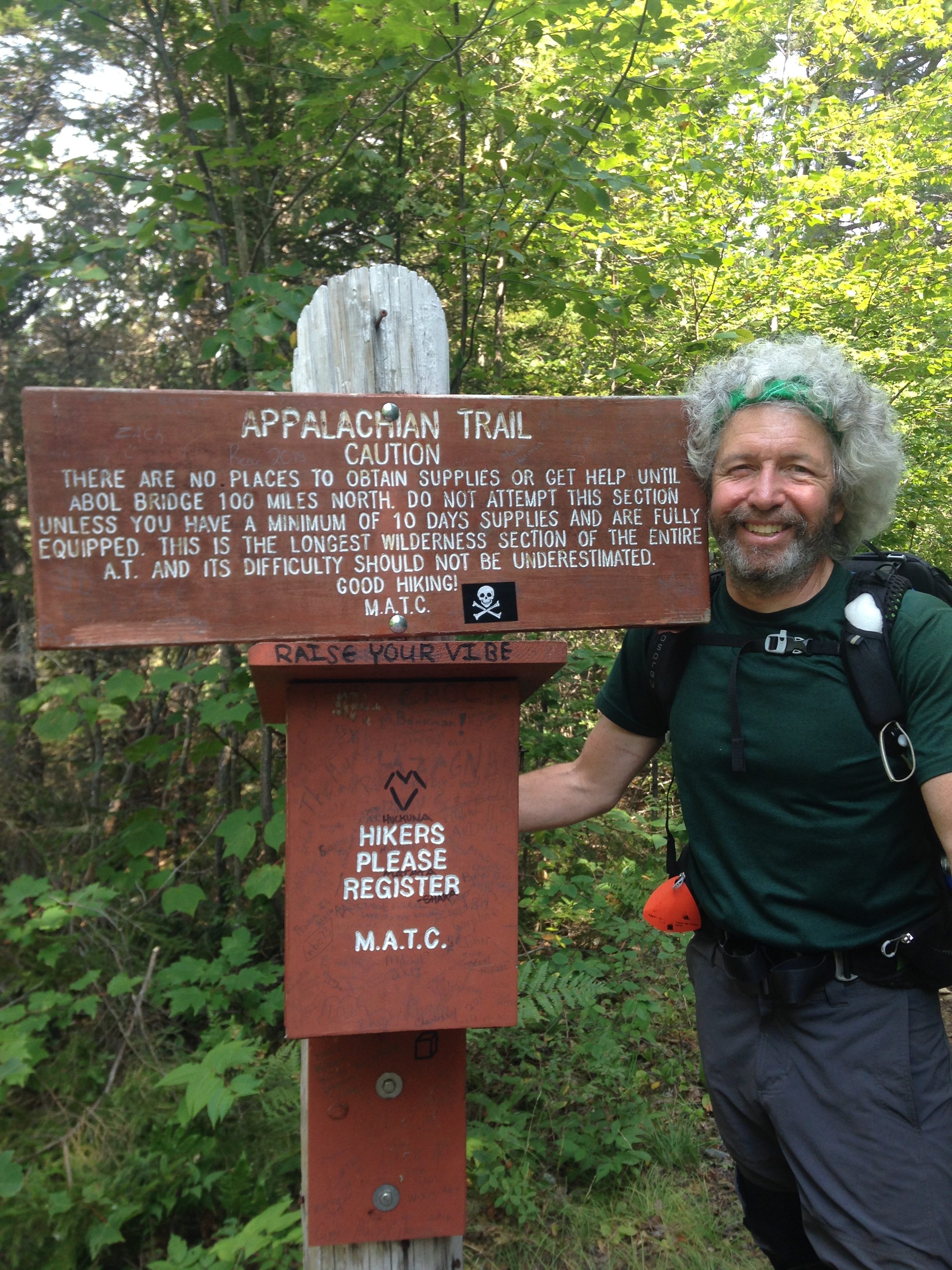 Few segments of the Appalachian Trail are as well known as the 100-Mile Wilderness. With no public road crossings between Monson and Abol Bridge, this section feels truly remote. The Wilderness is not as physically challenging as Southern Maine, but don’t underestimate it. Chairback Mountain and Whitecap in the southern half of this stretch are formidable. Even in the deceptively flat-looking northern half, rocks and roots can pose a challenge in this would-be easy stretch. Frequent crossings of major streams represent yet another obstacle.

Pro tip: there is one 10-mile stretch surrounding Jo Mary Road that’s pretty phenomenally easy, so look forward to that. 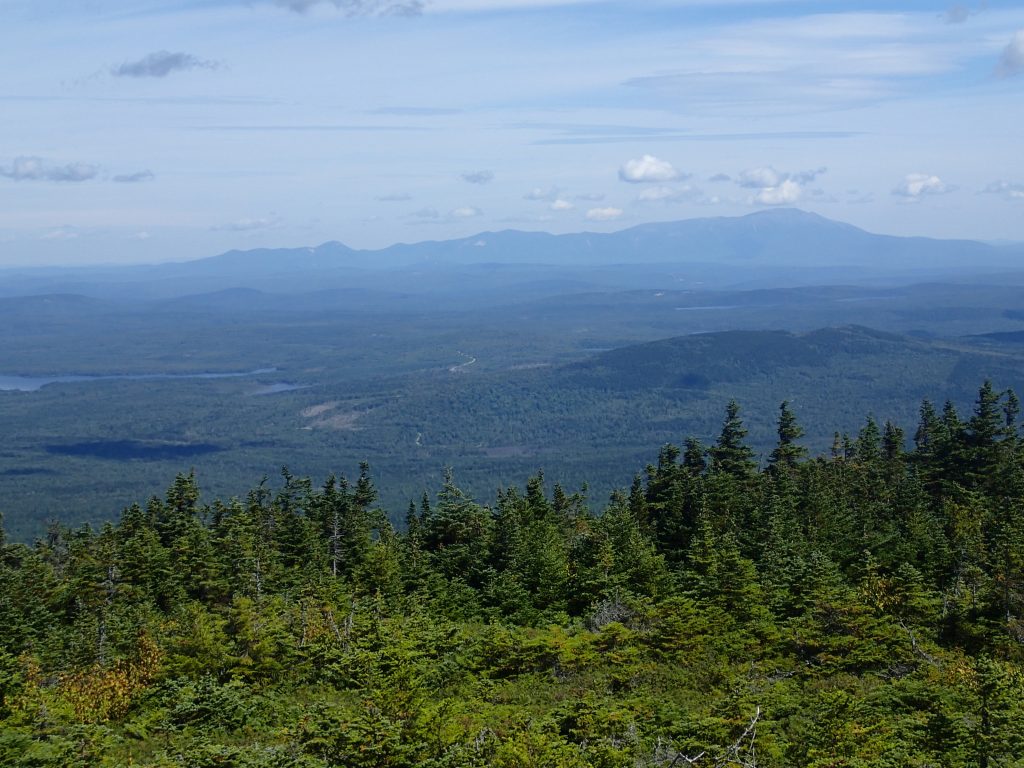 Katahdin, as seen from Whitecap Mountain.

For a northbound hiker, Whitecap is the last big climb on the Appalachian Trail before Katahdin itself. Speaking of Katahdin, the north side of Whitecap is the first mountain from which you’ll be able to catch a glimpse of that fabled peak. 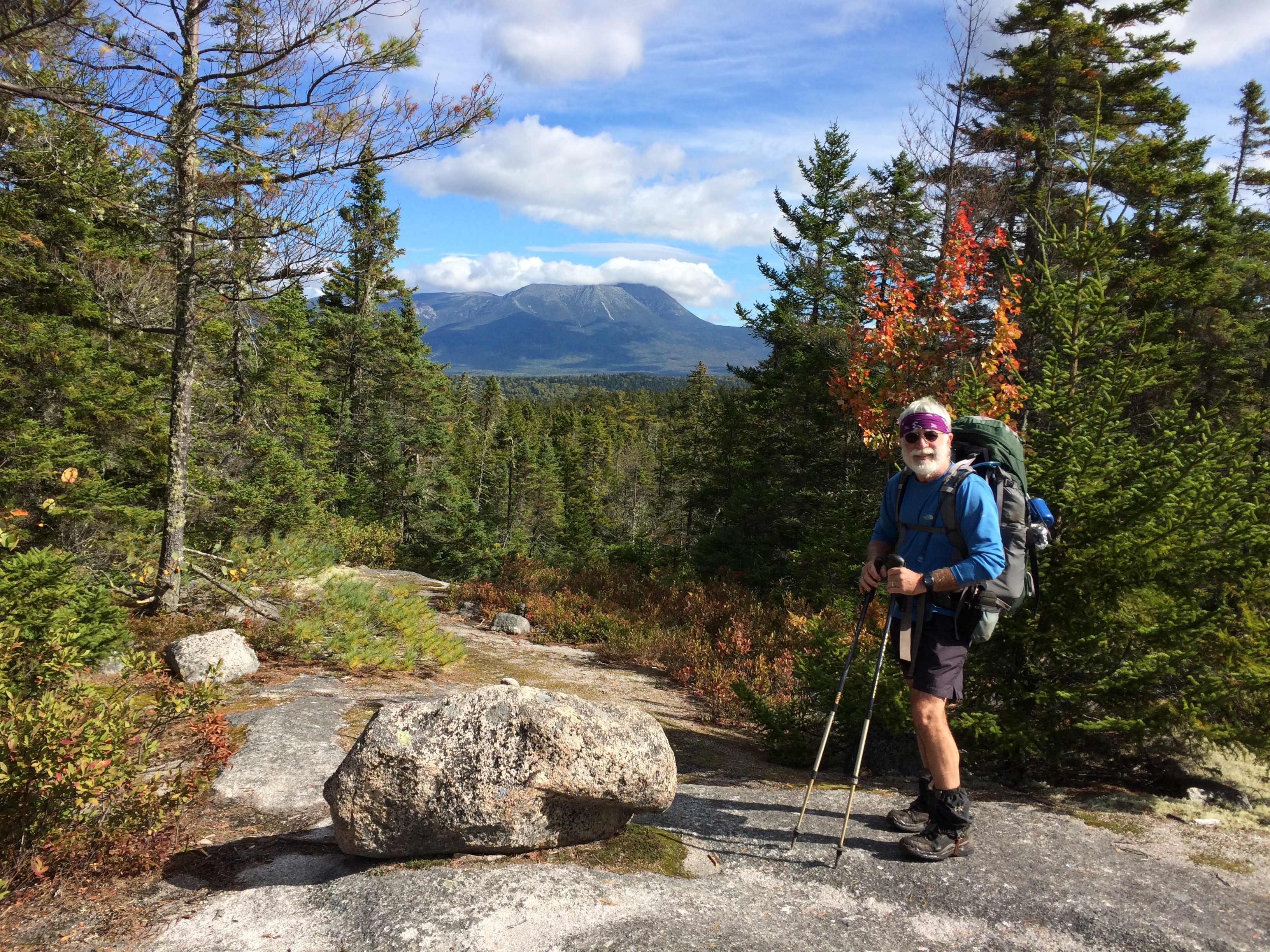 After strolling along the shores of beautiful Rainbow Lake, you’ll climb briefly to reach rocky Rainbow Ledges. There you’ll catch another, considerably closer view of Katahdin. After all, you’re just a few miles from Abol Bridge, the end of the 100-Mile Wilderness, and the boundary of Baxter State Park. Wild blueberries are abundant on Rainbow Ledges in late summer. 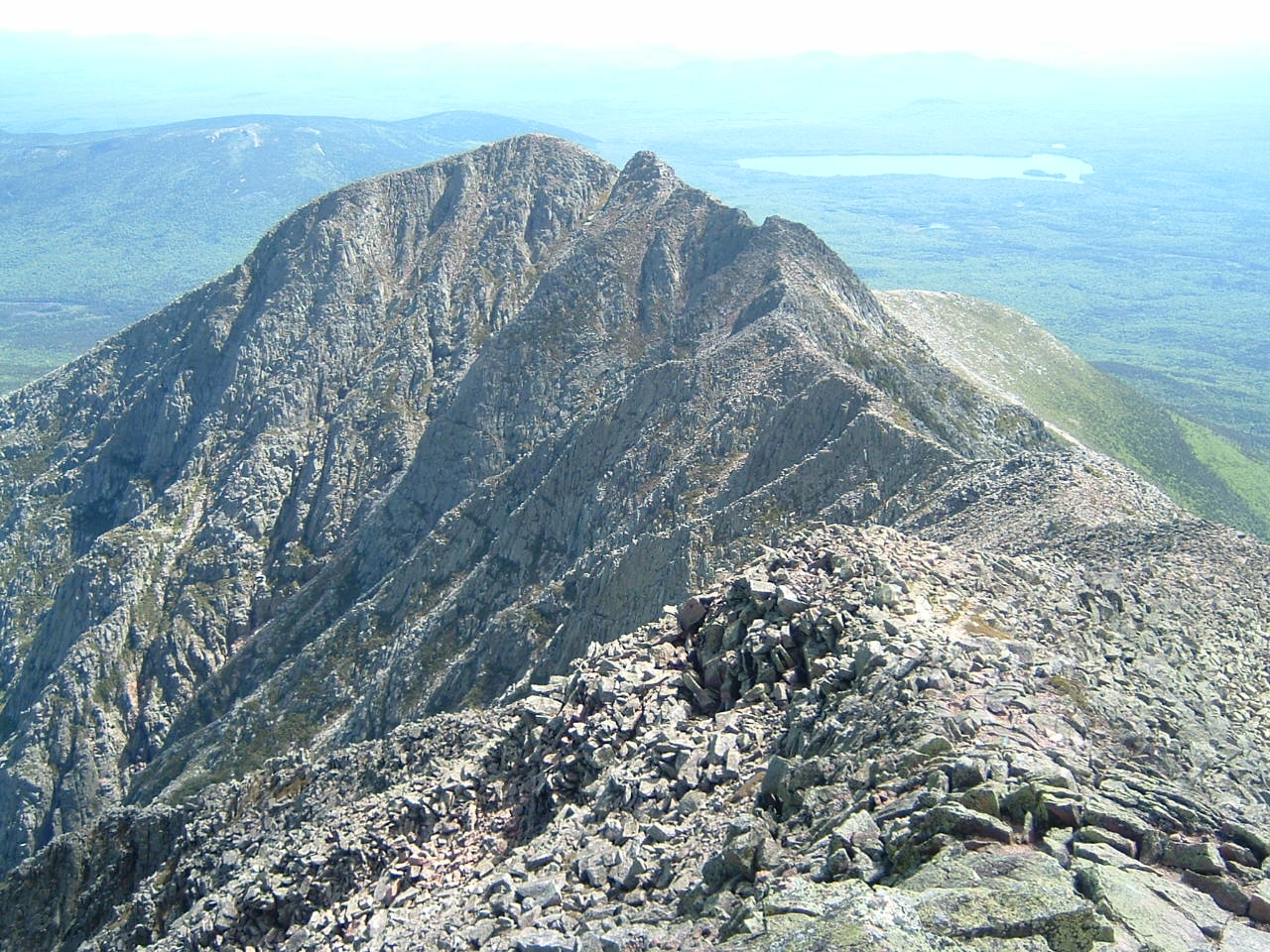 The Knife Edge on Katahdin.

Baxter State Park was donated to the state of Maine by erstwhile Governor Percival Baxter, and park staff has worked to maintain the land as a perpetual wilderness ever since. Lush forests and glittering streams grace the senses on an easy nine-mile stroll to Katahdin Stream Campground. From there, the ascent to Baxter Peak begins, and the trail becomes exponentially steeper with each passing mile. The Hunt Trail is the official white-blazed approach to Baxter Peak. Some hikers opt to take the Abol Trail (steeper, shorter, and less trafficked) or the Knife Edge (epic, death-defying traverse) instead. No matter how you approach the summit, it will involve big elevation changes, technical rock scrambling, and a good amount of exertion, so make sure you’re prepared. 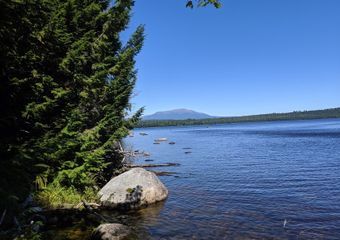 The Maine Event: Why Maine Is So Tough for NOBO Hikers"Started From The Bottom, Now We're Here" - Drake After four months and three weeks of hiking, The Sauce and I arrived to the final state line of our journey---New Hampshire/Maine. The final stretch of our journey is a mere…Read More 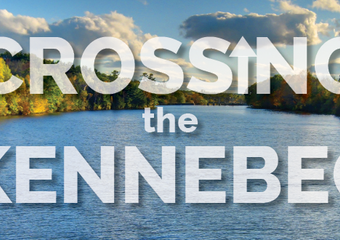 Crossing the KennebecEditor's note: Although many have safely forded the Kennebec, doing so incurs serious risk.  This article is meant only to offer a fair representation of these dangers.  To be clear- we do not encourage anyone to attempt fording the Kennebec River.…Read More 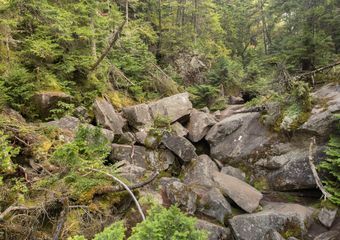 The Notch: What to Expect in the "Most Difficult" MileHikers about to hit The Notch want to know how it is, and those fresh out of it often give the same responseRead More 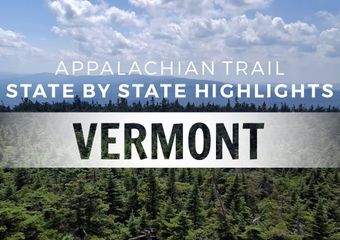 Appalachian Trail State Profile: VermontAs the Appalachian Trail moves north through New England, the sections get steadily longer—and so do the climbs. Stretching 150 miles between Massachusetts and New Hampshire, Vermont beckons with maple syrup, charming ski slopes, and a mysterious (if not downright…Read More 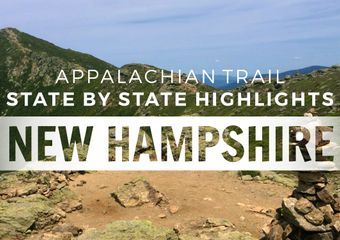 Appalachian Trail State Profile: New HampshireSomewhere in the vast green forest of New Hampshire, the Appalachian Trail steals across a small stream called Oliverian Brook, which snakes through a notch of the same name. This place is significant, and not just because it’s hard to…Read More