Appalachian Trail Thru-Hiker Trends: Examining Gear, Budget, and Resources Over the Past 5 Years

In 2014, we began conducting annual surveys about AT thru-hikers and attempting thru-hikers. Starting these surveys soon after my own thru-hike has been a really meaningful way for me to stay connected to my hiking community, especially since grad school keeps me indoors so much. It’s been my hope that the information from these surveys has helped and will help aspiring thru-hikers better prepare for their journeys.

Since we now have five years of survey data, it seemed to be time to look back at trends since 2014. Many of the hiker preferences, choices, and characteristics we report each year have stayed consistent, but many have changed. These changes include preferred trail guide resource, hikers’ budgets, footwear preferences, hammock use, pack capacity, and use of mail drops. Because we expanded the survey each year, we only have information dating to 2015 or 2016 for some trends. 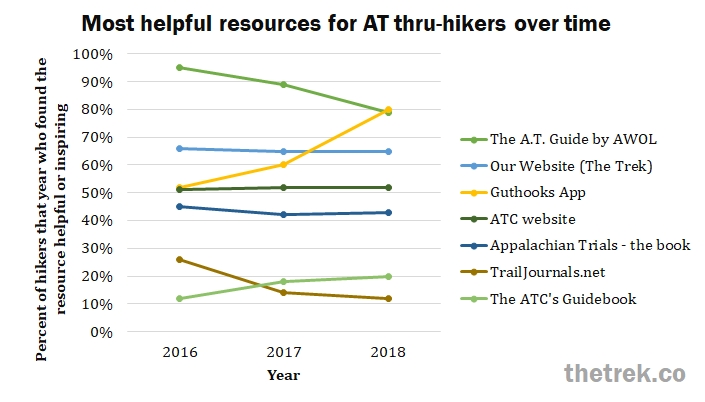 For many years The A.T. Guide by David “AWOL” Miller was the trail guide and essential resource for AT thru-hikers and section hikers. Since 2016, the Guthook app has gained popularity, and as of last year was equally popular with AWOL’s guidebook. Resources consistently rated “helpful and/or inspiring” by hikers in our surveys are this website (The Trek), the ATC’s website, and Appalachian Trials by Zach Davis, creator of this site. It’s worth mentioning that hikers who follow the website on social media are the ones recruited to participate in the survey so we expect that hikers who find our site helpful may be overrepresented in the survey. The longstanding online forum WhiteBlaze.net was a go-to resource when I thru-hiked in 2014, but even then the website looked outdated and lacked effective search features that were expected on websites by that time. Each year, WhiteBlaze.net has declined in popularity. Other forms of social media are still among the less popular resources for hikers. 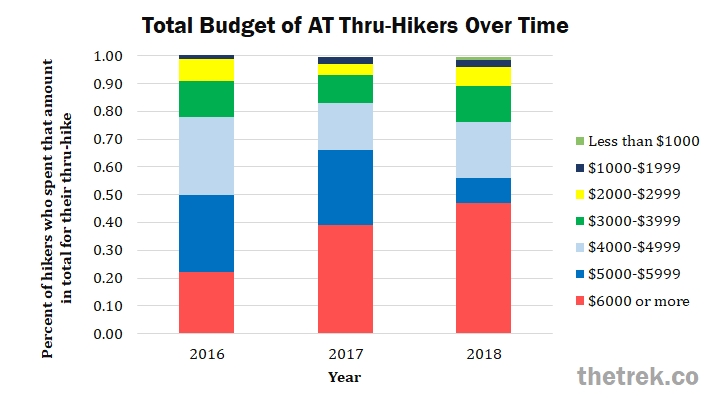 So, a hiker budget of $4,000 in 2016 is equivalent to a hiker budget of $4,200 in 2018. Although most hikers in 2016 spent $4,000 total, most hikers in 2018 spent one and a half times that ($6,000) OR MORE. In the upcoming survey we will change the response options of this question so we can know more about the budgets of those who spent more than $6,000. The past two years, I have underestimated what budgets would be because I spent only $4,000 on my thru-hike in 2014 and did not realize that hiker spending had changed so much since that time. So, until we can get more data for 2019, I recommend that future thru-hikers do not rely on budget estimates from people who thru-hiked more than two years ago. 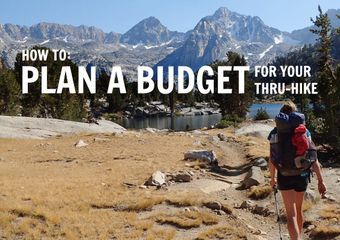 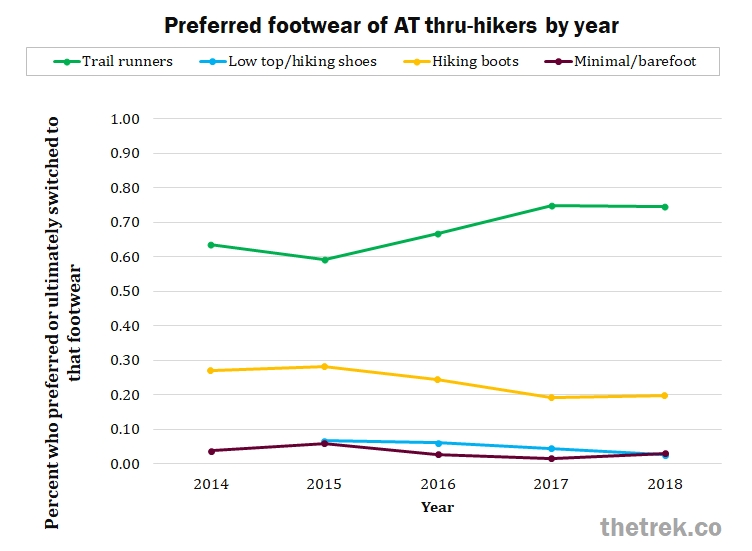 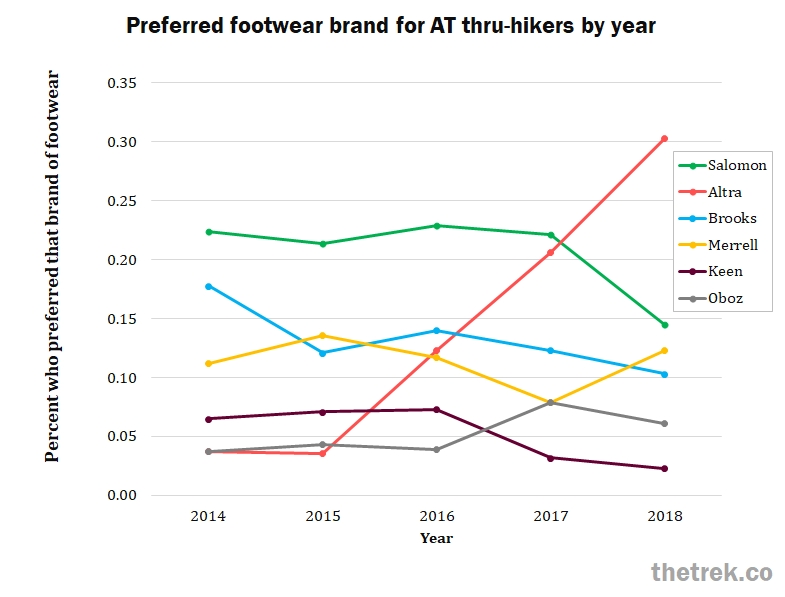 The popularity of Altras has skyrocketed in the past five years. In 2014, they were only worn by 3.7 percent of hikers, and now they are the most popular brand, worn by 30.3% of hikers in 2018. Salomons have maintained steady popularity and were the most popular footwear choice for hikers until Altras unseated them in 2018. Brooks and Merrell remain consistently second and third most popular, hovering around 10-14 percent each year. Not shown on the chart are La Sportiva, Vasque, and New Balance, which have been worn by 2 to 6 percent of  hikers each year. We’ve linked all of our 2018 surveys at the bottom of this post for details on footwear and gear.

Hammock use has declined over the past five years 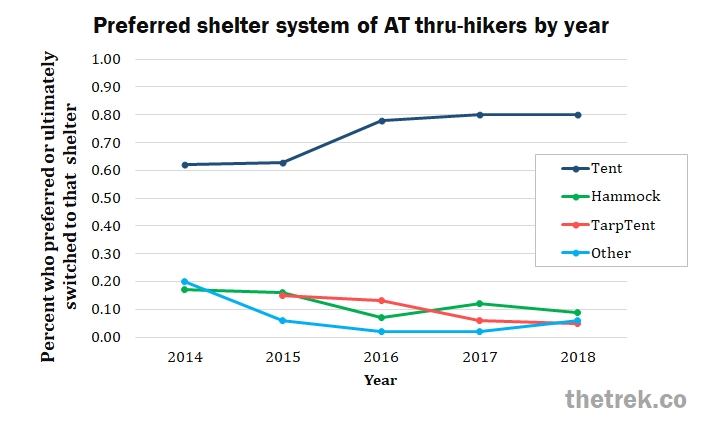 I’ve heard anecdotally that in the first few decades of the AT’s existence, many hikers relied solely on the lean-tos, but as far back as the 1970s, the AT became heavily trafficked enough that hikers needed to bring their own shelters. For the past five years and probably for some time before that, tents have been the most popular shelter system for AT long-distance hikers. Still, they’ve increased in popularity from 62% of hikers using tents in 2014 to 80% using tents in 2016 to 2018. The reason for this increase is unclear from our data. At crowded campsites, good spots for tents OR hammocks can be tough to find. I wonder whether more and more couples or families are hiking the AT, since we know from last year that couples tend to use tents more than individual hikers do. As of writing this, I don’t have any definite answers. If you have any ideas on the reason for the decline in hammock use, please comment below. 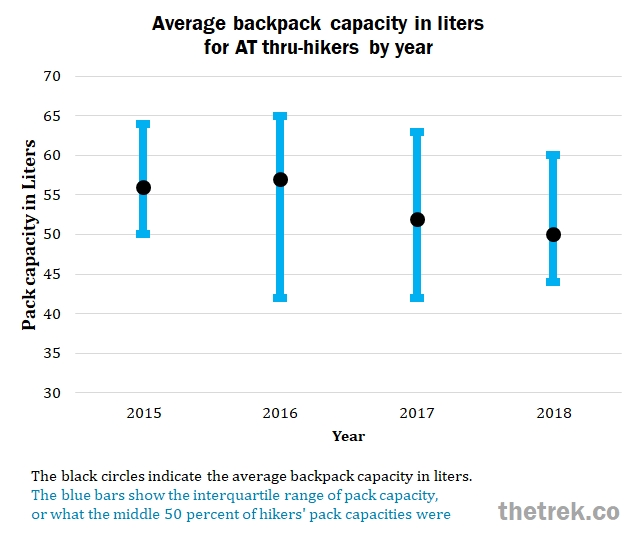 We first surveyed about backpacks in 2015. The average pack capacity has declined from 56 to 50 L in the time since then. This is likely the result of multiple trends:

We did not ask about base weight of supplies until 2016, so we can’t compare base weight to pack size for the 2015 data. For as long as we have measured base weight, most hikers have reported base weights from 15 to 20 pounds. 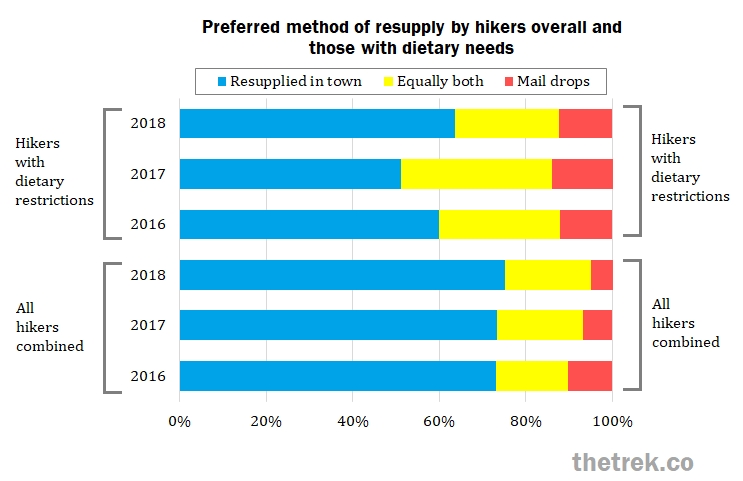 Older resources about the AT tend to emphasize the mail drop resupply method, which was the default way of resupplying for many decades of long-distance hiking on the AT. However, mail-drops are no longer necessary for most hikers because the ability to get to and from town has improved and towns have more stores than they once did. For hikers who do not have dietary restrictions, fewer and fewer each year use mail drops for resupply. Hikers with dietary restrictions are a notable exception. Between one-half and one-third of hikers with restrictions such as allergies or vegetarianism still use mail drops as often as town stores or more often.

More From Our Annual Hiker Surveys

In the next few months, we will be surveying hikers from 2019 and posting those results. Information from our 2018 survey can be found below. 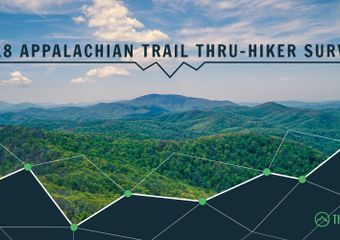 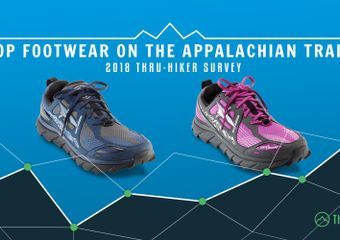 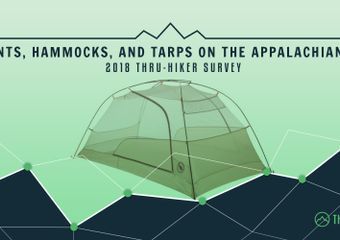 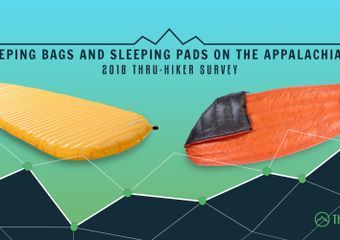 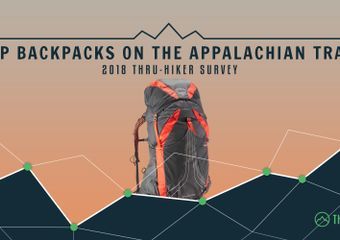 Top Backpacks on the Appalachian Trail: 2018 Thru-Hiker SurveyIn this installment of The Trek’s 2018 Hiker Survey, we cover backpacks and base weight. We asked hikers about the frame type, capacity, brand, and model of their backpacks. In the past, we’ve found that the load within that pack…Read More 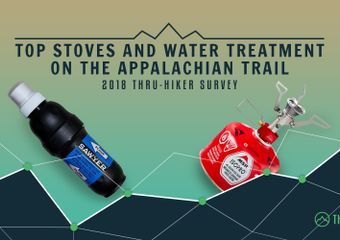 2018 Appalachian Trail Thru-Hiker Survey: Top Stoves and Water TreatmentsWe surveyed over 300 section or thru-hikers about their stove, food, and water preferences and their experience of illnesses on the Appalachian Trail in 2018. This year, enough hikers with dietary restrictions were surveyed that we found some differences in…Read More