The Art of ‘Pooing in the Woods

No, this isn’t a post about shitting in the woods. I’ll save that for another day. Instead, I wanted to talk a little about one of my goals/reasons for hiking the AT and a little about the no ‘poo method of haircare(sorry fellas, but hey, I know some guys who may be curious about hair care on the trail as well).

Basically since I was born (and I’m assuming the same is true for many of us), a daily bath, along with a daily hair washing involving some sort of shampoo (hereafter referred to as ‘poo). This is such a ritual among Western civilization that we don’t even think about it, we just do it. Like many other things we just do because “we’ve always done it that way”, this isn’t necessarily what’s best for us and in fact, many of the products we use to clean ourselves are harmful not only to our bodies but also to our Earth.

One of the many reasons I’ve decided to spend 6 months living in the woods is to reconnect myself to nature, and in doing so to learn to live off of less and to live in a way that lessens my negative impact on the environment. Clearly, while trekking over 2000 miles across the Eastern US, daily showers will become a thing of the past and it will not be uncommon to go several days without washing my hair. Now, I’ve always been rather fond of my hair. I like for it to look pretty and feel and smell nice. I take pride in my golden locks and like to show them off. So I began to contemplate how on earth I might manage to maintain some level of decency with my hair while on the trail. The solution I came up with?

The No ‘Poo Method!

Two months ago I did some research on this method of hair care and decided to take the plunge. I ditched ‘poo completely and decided to take a more natural approach. Turns out, ‘poo is terrible for your hair and the environment. It strips all of the natural oils and vitamins your hair produces that are intended to condition and keep your scalp healthy. Most popular brands of ‘poo (think Aussie, Head and Shoulders, Herbal Essences, Tresseme, etc.) rank between a 5 and a 7 on the Environmental Working Group’s toxicity ranking scale (0-10, with 0 being non toxic). Here’s a great website with more info on this: https://thecrunchymoose.com/one-year-without-shampoo/

So what is no ‘poo? Basically, you wash your hair with baking soda and condition with apple cider vinegar. Now, a ton of people who try this give up after only a few washes and I can completely understand. Most people go through a 2-3 month transitionary period where your hair really does look and feel less than spectacular. But that’s because this method relies on your scalp producing lots of natural oils and conditioners and if you’ve been using ‘poo your whole life, it takes a while for your scalp to readjust to the proper level of oil production. I stopped daily ‘pooing a few years ago and was only using ‘poo every 2-4 days as it was, so my scalp was already on the mend and had decreased oil production. When I switched to baking soda, the first washing turned out terrible. My hair felt like straw and was a matted, tangled mess. I almost gave up right then, but I decided to persevere.

To start with, I had to wash every 3-4 days. I gradually increased the number of days now, two months later, I can easily go 7-8 days between washings without my hair becoming a grease fest or my scalp becoming extremely itchy. 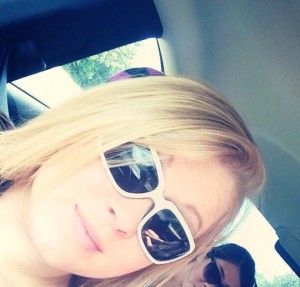 My hair after 2 months of no ‘poo!

So what does this have to do with the AT?

You’ve probably already figured that out. I’m already going 7-8 days between washings, and my hair still looks nice. This means that once I’m on the AT, the 3-4 days between towns should be no big deal, even with the increased sweating/getting rained on. Hopefully, this is going to set me up for at least some hair success on the trail.

Another maybe even more important reason is that baking soda is lighter than shampoo. And you only need a very small amount. A small ziploc of baking soda weighs an ounce or two and would last me several weeks to months on the trail. Baking soda can also be used in lieu of toothpaste and, since it’s completely natural and non-toxic, it can be used trailside. The same is true of ACV. It weighs about the same, maybe somewhat less, than conditioner and it serves many purposes other than conditioning hair.

Reason number three is that it is CHEAP. You can get a whole big ole box of baking soda for less than $1. And it will last you months. And months. And ACV is waaaaaaaaaaaay cheaper than conditioner. You can buy a liter of the stuff for a buck.

And finally, possibly mainly, I’m lessening my environmental footprint, not only on the trail but in my “real” life. This is a change that was brought about by my decision to hike the AT but that will continue to offer positive benefits to my life long after my hike is over. Because of that, I wanted to share this with you and hopefully pique your interest and get you thinking about it. ATTENTION DUDES: I know a few men who use this method and swear by it. Most of them, however, ditch the ACV because it makes their short hair too oily. Just an FYI.

Added bonus: My hair looks and feels Ah. May. ZING. It’s softer than ever, much less tangle-prone than it used to be, is more manageable, has more volume/body, less breakage, is more shiny, is never frizzy, I could go on and on. It’s like having a new, better head full of hair. Give it a try. I don’t think you’ll regret it.

What do you experienced trail folk think?

Is this a realistic way to clean my hair on the trail? Not shampooing at least once a week or so isn’t an option for me. Mainly because my scalp gets so itchy that I’ll scratch it raw and that wouldn’t be a good thing. But I do think this would be a lighter, less expensive alternative to shampoo/conditioner.