I slept in to wait out the rest of the storm and I certainly enjoyed the extra sleep. I had survived the lone night warm AND dry. I felt proud of my first solo camp and happily began my way to Wayah Bald. There seem to be two different stories as to the origins of this name. At the bald, a story is offered of a man who came onto the bald to observe the stars and asked for wisdom. This man’s grandson was named Wayah, who the bald is allegedly named after. Sources online claim that the name is from the Tsalagi word “Waya or Wayah”, which means wolf. This area shows evidence that it was once a hunting ground as far back as 11,000 years ago and the wolves were what was hunted there. Both could be true or neither could be true; that seems the way it goes for most Indigenous history given by those who were not actually a part of the society we had. It is something that has frustrated me before and is something that has been bothering me again being on trail and seeing things that are not true.
When I got to the road that leads to the observation tower on top of the bald it was still very foggy. The valley below was filled with clouds as was the sky in front of me. The body of the observation tower was dark and ominous so I figured going up to the actual view would be much better. When I got up there I couldn’t see much, so I began looking at the information sources they had put up. One of the excerpts (different from the one above) had blatant lies on them, so I decided to head out. However, as I walked down a man from Quebec began to chat with me and the fog cleared out! I gladly got the actual view from the bald and then the both of us headed out.
For four miles we cruised through the woods and found we had a lot of common views. I learned a bit about Canada and was able, in turn, to explain the U.S. a bit more to him as well. After those four miles began a three mile climb up to the shelter. The steep incline exhausted us both and so we were glad to see the shelter when we got there. I’ve noticed that I get exhausted and hungrier faster, so it seems my hiker hunger has started to set in.

I always love getting views on trail, but views early in the day really feel like a proper morale boost for the rest of the day. A few miles in, I took a short side trail to Rocky Bald and enjoyed the sun and the pointy mountains in view. The bald had the cutest little shrubs that looked like sponges, so I found them adorable! I think they were a type of lichen. Once back on trail, I made my way down to Tellico gap. This name comes from a Tsalagi word, Talikwa, which translates in English to “the open place where the grass grows”. This area was also a part of the trading path I mentioned when talking about Unicoi gap.
From the gap, I began to climb up to Wesser Bald. There was a fire tower at the top that I was very excited to climb up! I got 360 views for miles upon miles. I also got a really wonderful view of the Smokies for the first time! My stomach swelled with excitement. Because of the strong wind, I climbed down from the fire tower to have lunch. There were some bees fighting beside me and a few birds approached me. I’ve never had a bird come so close to me before.
I began the climb down after stretching out a bit. The climb was WAY more technical than I expected. I was on top of the mountain ridge for a good portion of the hike and then the climb down sometimes involved big rocks. It was fun at times! I also got my favorite picture on trail so far of me being goofy at a lookout. To top it all off, I rolled into camp a bit sooner than I expected. The end of the walk was in the woods again and I felt an overwhelming sense of gratitude to the Tsalagi Nation for allowing me the space to travel and witness their lands. It was a wonderful feeling to end a beautiful day. 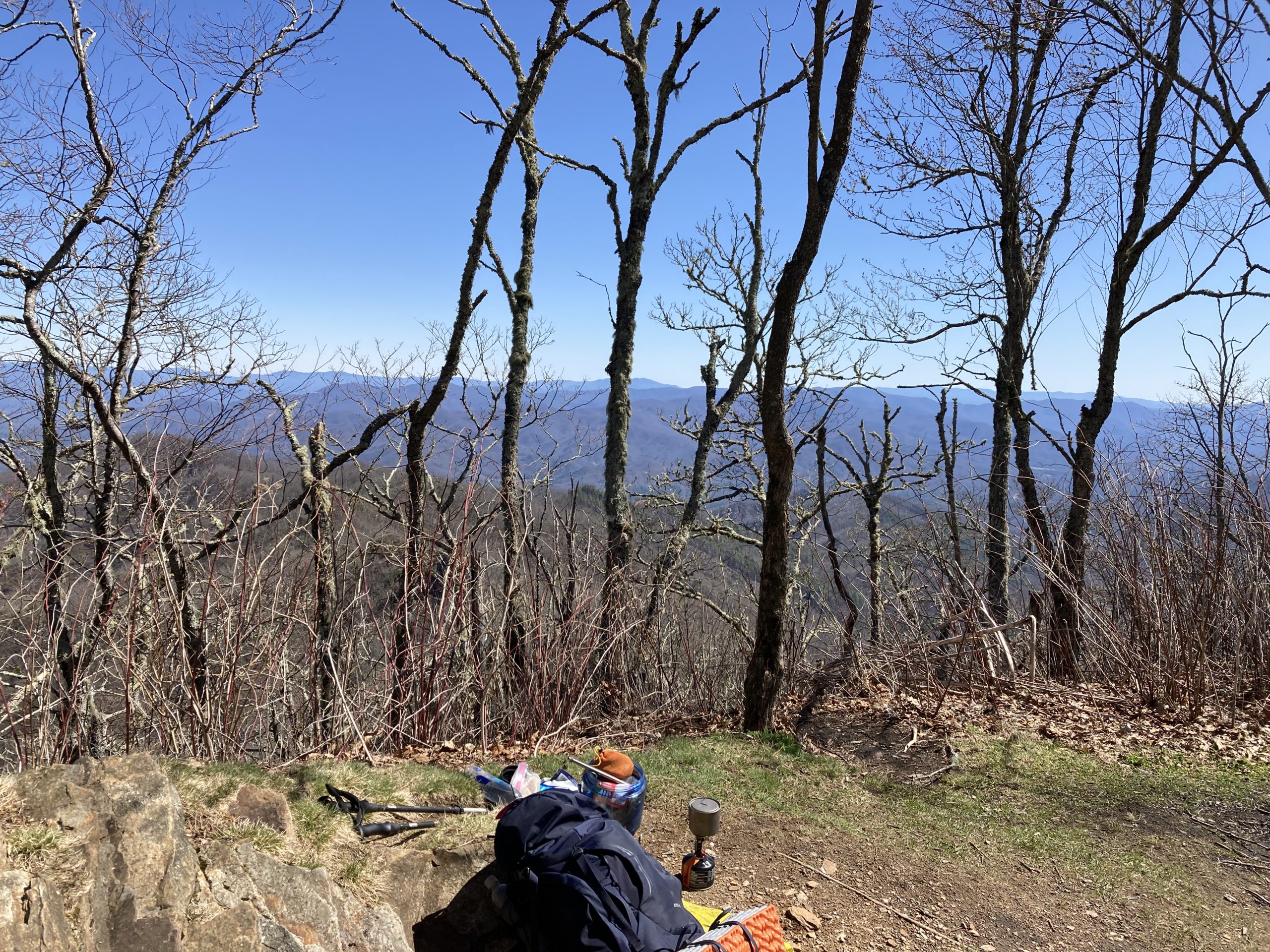 I love having a nice view for lunch! 🙂 🙂 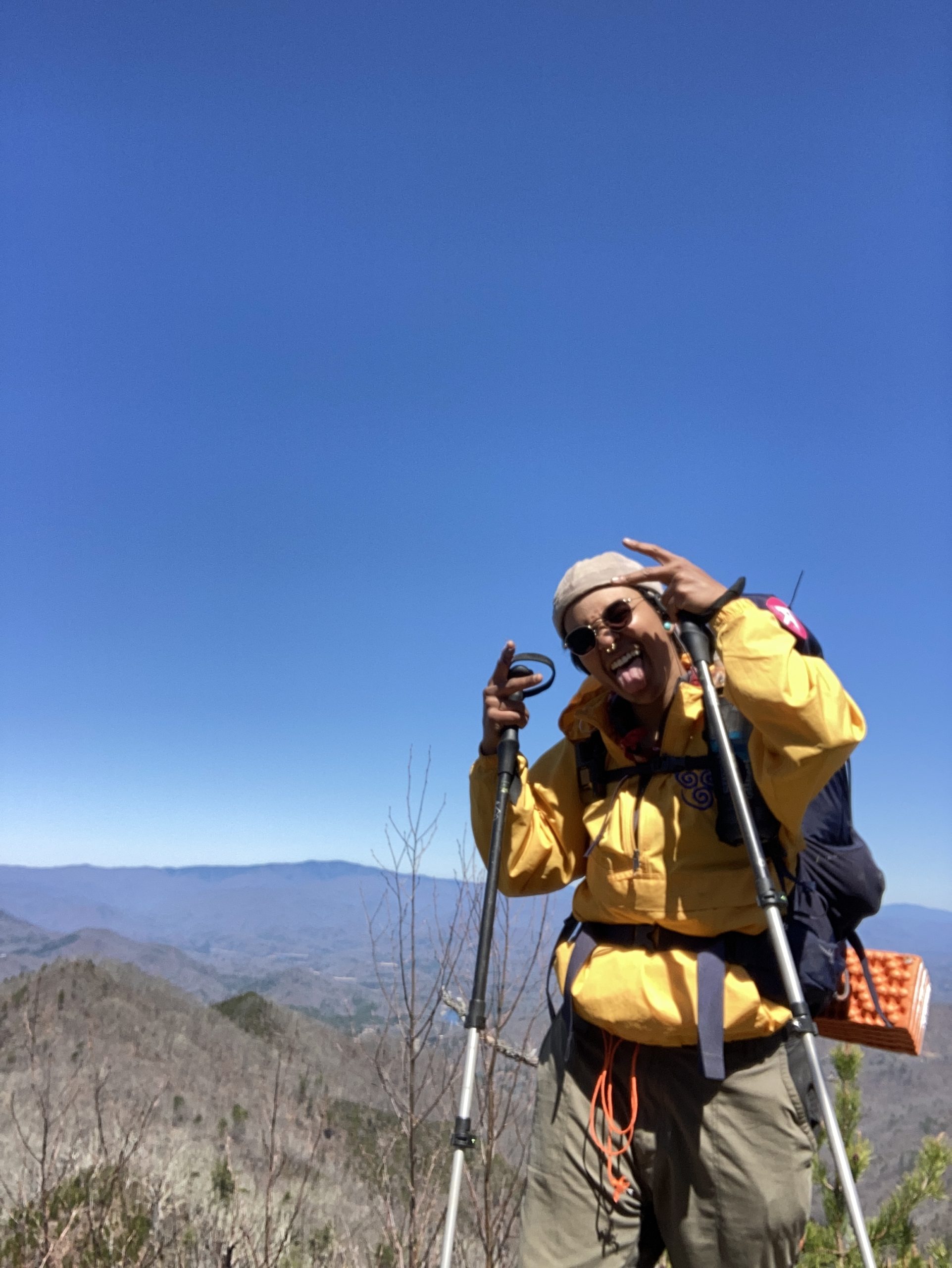 The favorite picture I mentioned above 🤪

When I woke up, I remembered how I wasn’t really looking forward to this day for two reasons:

I did get some kisses from a hiker’s dog while I was getting ready, so it gave me a sweet boost for a day I wasn’t looking forward to. And an update from the previous day: Dog kisses are the second best morale boost for a day of hiking!
As I got the first view of the river, I began to choke up and felt knots in my throat on my way down to the road. It felt strange to be there and see the river they had to cross. Not only was it a long crossing, but the river was also deep and strong. I couldn’t imagine crossing it at all let alone being forced to do so in December. I got caught up doing chores and ended up spending more time there than I expected. I was glad to be able to chat with my best friend for the first time since I hit the trail though! (Hi, Kayla!!)
As I was about to set off, I hung back a bit longer sending some encouraging messages to my love, who was going through a tough moment. When I finally got up to start walking a woman stopped to ask me if I was a thru-hiker. Upon saying yes she graciously gave me $20! It made me glad that I left at the exact time that I did. The trail is so strange like that sometimes.
The climb out of the NOC wasn’t actually THAT bad… it was just very… very long. The last two miles or so were the steepest part, but before this section the trail opened up to views towards the Smokies again! I soaked up the views and then struggled to the top of the mountain. On part of the way up, I began an episode of All My Relations that discussed food sovereignty. This was an exciting episode for me because I love food and love cooking!! I learned a lot about the importance of food sovereignty and learned of this fascinating study where people ate food from a specific Indigenous Nation for 90 days and it did things as drastic as reversing their diabetes. It reminded me how important eating whole foods is and gave me more ideas as to how I can incorporate this into my life after trail. 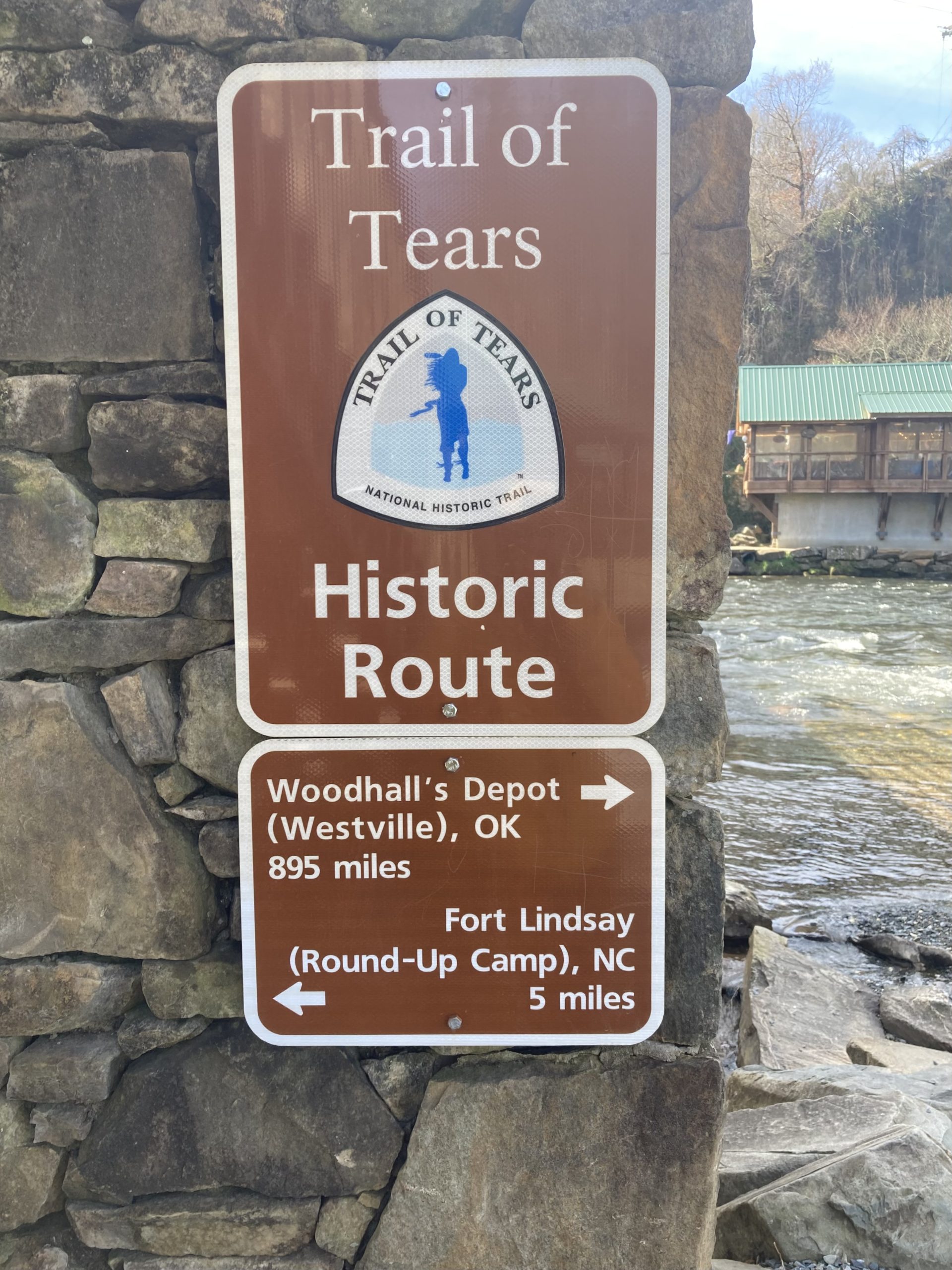 I was not expecting to see this, but was glad for the acknowledgement. It makes me wonder what people who don’t quite know the full history think when they see this.