I set off this morning with two tramilies that I had been around for the last month. A tramily is essentially a group of thru hikers who have decided to do the trail together! They both went to breakfast and I pushed on out of town. I crossed what is now called the French Broad river. The Tsalagi Nation called the section between this town and Asheville Vtakiyostiyi (Un-TA-ki-yo-STI-yo), which means “where they race”. This referred to the rushing water of this section of the river, but other areas had different names.

After following Vtakiyostiyi upstream a while, I enjoyed watching it get smaller as I ascended the rocky trail out of town. After the incline leveled out, I was provided some nice views of the mountains beyond the tree line. A few miles later, I walked up to a pond! I saw a frog, some fishes and some tadpoles that had grown their legs. This put a smile on my face and I walked off happily. This led to a dirt road that passed through a beautiful field, which shined brightly on this morning. I wondered how long the field existed and if the Tsalagi Nation hunted deer here. While pondering, I loosened my back up before heading back into the woods.

The trail in the woods eventually opened up enough on the eastern side to show the mountains beyond. I noted that spring was really getting into gear because there was more variety in bird calls and many more types of bugs out. As I walked down the trail, I looked down and saw a small reptile running away from me. As I approached the tree the unknown animal climbed up, I saw that it was an Eastern Fence Lizard! I looked in awe at its size, scales and especially the shiny blue belly it had. I had never seen a lizard in the woods like it.

The trail then led uphill into the pine zone and I noticed that the smell of pine trees reminds me of home. This realization brought me a lot of peace and comfort. Shortly after this, I started a podcast, which got me 8.5 miles in to a side trail that led to a fire tower. I soaked up the enormous view for a while before heading down and pushing on. The episode of This Land that I was listening to was incredibly disheartening. It introduced a new topic, which was some background knowledge on the modern legal attack on the Indian Child Welfare Act. This is the topic of the second season. The host covered the information about a case called Indian Girl vs. Adoptive Parents. The main takeaway from the introduction is that there is a misconception about Indigenous people being regarded so due to their “race”. The reality of Indigenous culture and history is that Indigenous people are considered so through the relations we have in our lives. What I mean by this is that I am Indigenous because of my mother, my grandmother, my siblings, my relationship to the land, to food, to my body/mind/spirit and to other aspects in my life, which I have been learning to reconstruct in an Indengous way. So, all Indigenous peoples are all connected/related; we are not different racial groups, but more so political groups that have been intersectional since the beginning of time. This is relevant because the basis of all arguments against this law is based on a false narrative of Indigenous “identity” based on an equally false biological perspective of race. The episode make very clear the importance of this case and although I am very scared, I am also excited to learn more about it. The episode reminded me why education, to me, is the most important part of moving forward into a future that benefits all humans and in turn all life.

Considering the nice views, abundance and variety of animals, learning news things and getting compliments throughout the day, it was certainly one of the highlights of my trek. I wound down and slept very happily on this night. 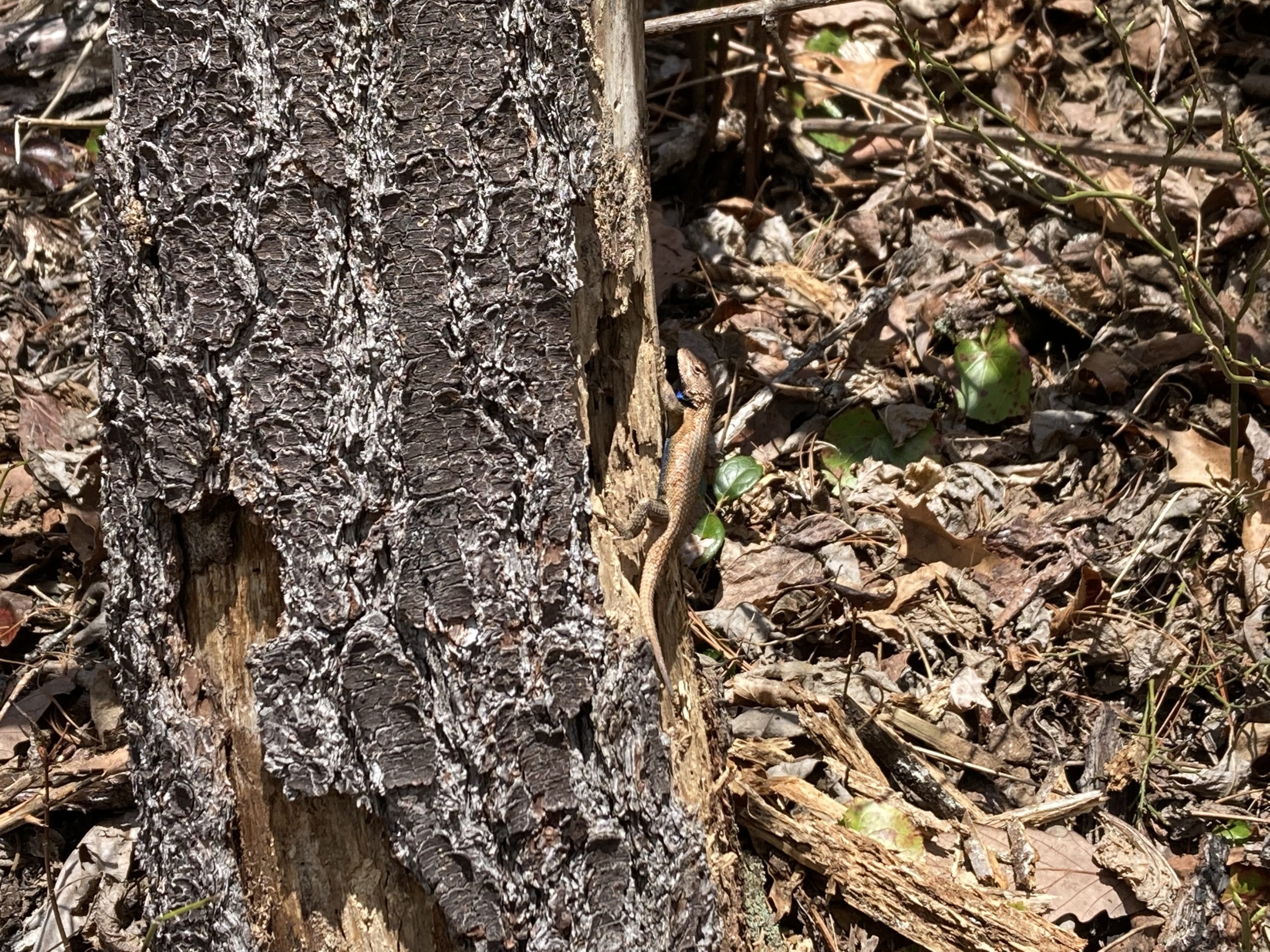 The beautiful lizard I mentioned earlier 😁

Upon breaking my tent down this morning, I saw a little salamander who had curled up on my footprint overnight some time. This brought me joy as well as the fact that it stopped raining by the time I was ready to get out of my tent! I left happily at the thought of being visited all night by a sweet amphibious relative.

The beginning of the day was downhill, so I got to try out a new technique for the sake of my knees. I was very happy with the results and could tell there was not only less pressure put on my knees, but on all my leg joints and feet in general. One must be grateful for Dr. YouTube and Dr. Google! After taking a bit of a break, I pushed on to the next road crossing which had home-baked goods! To whoever made those rice crispies, thank you for making a thru-hiker’s day!!

At the next shelter I stopped and had a pepperoni lunch burrito, which has definitely been the best version of lunch burrito I’ve had on trail thus far. After lunch began a climb where I noticed how green everything was becoming from the new spring blooms. It took a moment to soak up the new buds, leaves and plants and appreciate the new cycle of life and growth ensuing within the forest. New buds and leaves, to me, are especially vibrant and absolutely adorable.

I started an episode of All My Relations shortly after. This episode was on Indigenous languages, which I touched on during part two of the recap of my time in the Smokies. This episode expanded on the importance of language in regards to its power of holding a people’s culture within it. It further entice my curiosity to learn more about Indigenous language and instilled in me the urgency to do so as well. The episode not only covered the dying of some languages, but also the revitalization of some as well. It also brought up an important point that understanding one’s language is crucial to ceremony and medicinal practice, which ties into the idea of the continuance of speaking Indigenous language as a requirement to the continuance of Indigenous culture.

This equally inspiring and disheartening episode led me to the top of a ridge that had panoramic views! These moments and locations certainly ease the weight of the information I intake on my trek. This ridge required rock scrambling, careful footing, and climbs. I always love this because not only does it break the monotony of trail, but I also find that I envision myself as a child being Bear Grylls again; any opportunity to revert some of my childhood happiness is wonderful. Even better, I hit 300 miles coming off of this ridge! After finishing the podcast, I put on Back to Black and happily skipped to my shelter singing along with Amy. 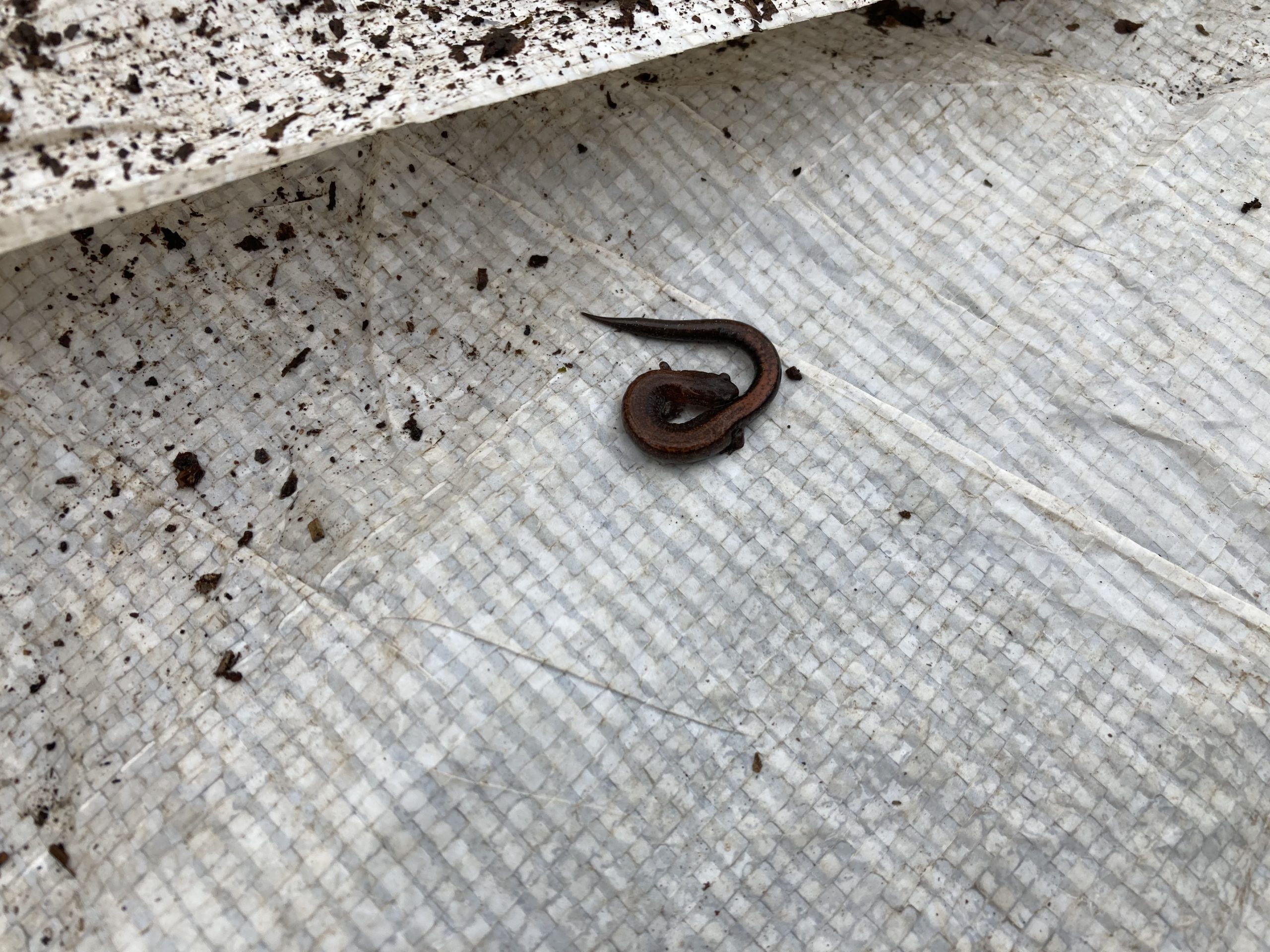 My mind was occupied for the first few miles  with the dream/nightmare I had the previous night. Along with making some connections and growth about feelings/beliefs I gained through traumatic experiences from my past, it also led to piecing together a nice introduction for a future presentation I plan to make about my time on the AT. After jotting down the meat and bones from my stream of consciousness, I got to a side trail. I excitedly climbed the boulder ahead, which led to a disappointing open area that provided no view. On my way back, I slipped on the rock and was reminded you can never be confident walking too fast on rocks. Luckily, I did not sustain any serious ailments though.

A bit of the way into the forest I saw a grey clump sitting on the side of the trail that looked very out of place. I slowly crept towards the figure, unsure of what it might be. A few seconds later, the figures jumped up about head height and revealed itself to be two birds fighting. Spring has certainly sprung!! The birds watching overhead called an alert and the two birds stopped their scrapping and awkwardly hopped off trail. It was amusing to see the cycle of life happening in real time in a way I’ve never experienced before. I chuckled as I passed the two little guys still trying to go at it, but inevitably going separate ways.

At the next shelter I put my feet up against the wall to help alleviate some of the pain and pressure that had accumulated over the last few miles. Then the trial led to a wonderful field and into a neighborhood where I stopped by a creek for lunch. I watched a dog walk hurriedly down the road to fulfill his need to mark his territory every few feet.

After lunch started the climb that lasted the rest of the day. It was incredibly tough to do, but it did reward all who hiked with some beautiful waterfalls. I took a break a short way in, once again, to intake how green everything has become. It has been a beautiful transition to witness day by day. As I got closer to the shelter, I listened to a podcast that Dr. Yaba Blay did on Brené Brown’s podcast. They spoke about her book “One Drop: Shifting the Lens on Race”. For those unfamiliar, the one drop rule was a genealogical means of qualifying anyone with any amount of African ancestry as “Black”, no matter how far back or how many times that is in one’s ancestral line. This was used as a means to add to the population of bodies that could be and were exploited for labor. It was my first experience with her work and her mind. I enjoyed the podcast episode thoroughly and feel very grateful for my significant other having recommended listening to what Dr. Blay has to say about race. I recommend the episode to anyone who is curious in garnering language and knowledge about topics such as colorism, blackness, race and white supremacy. It was a great introduction on a topic that affects everyone in this country, no matter the color of your skin.

I was EXHAUSTED when I got to camp and after walking on the longest side trail to receive water, I was more than happy to decompress in my tent. I could feel that the break I had planned in my near future was not only something I desired greatly, but also something I definitely needed. With thoughts of home and my lover on my mind, I slept peacefully that night. 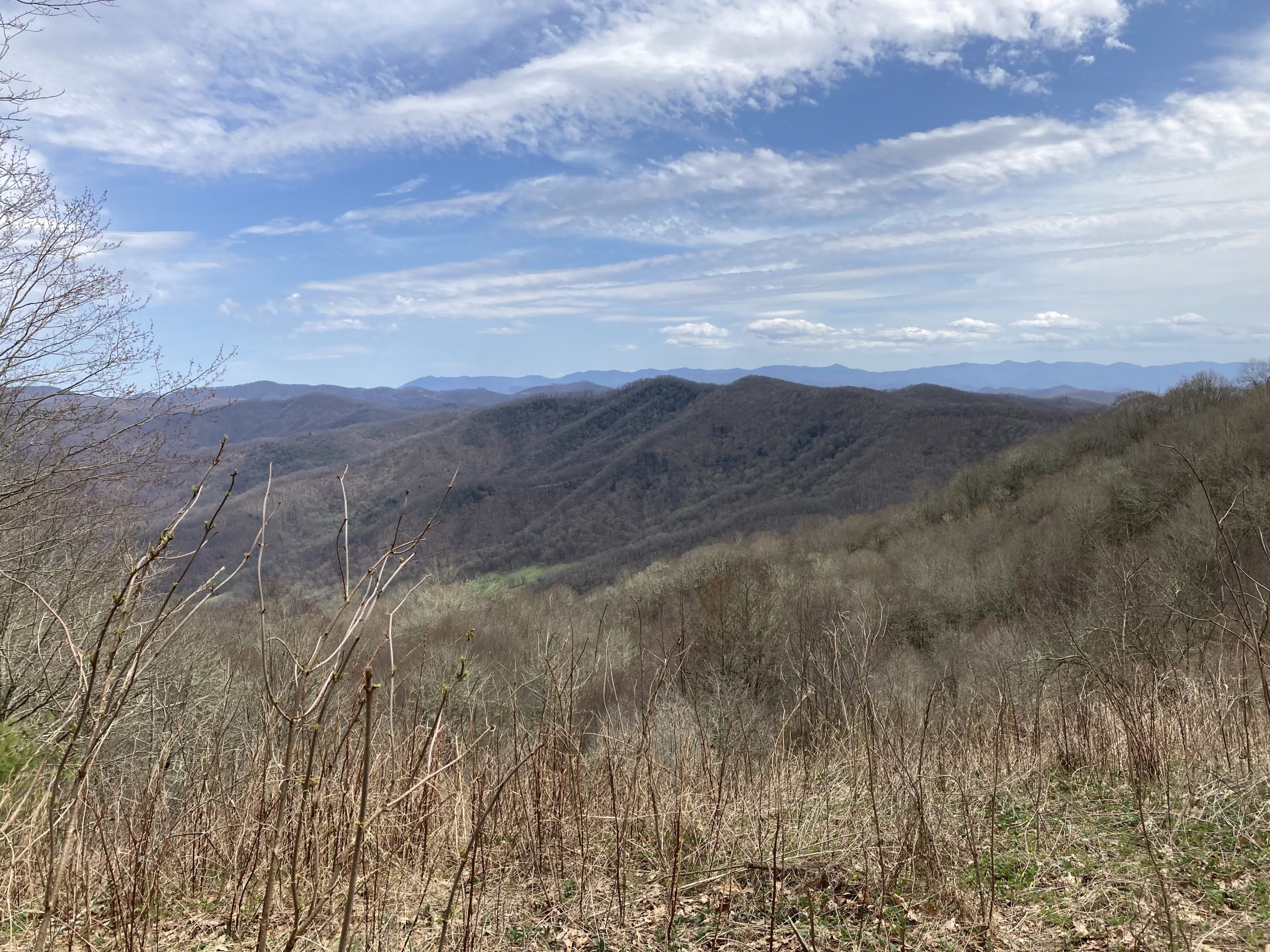 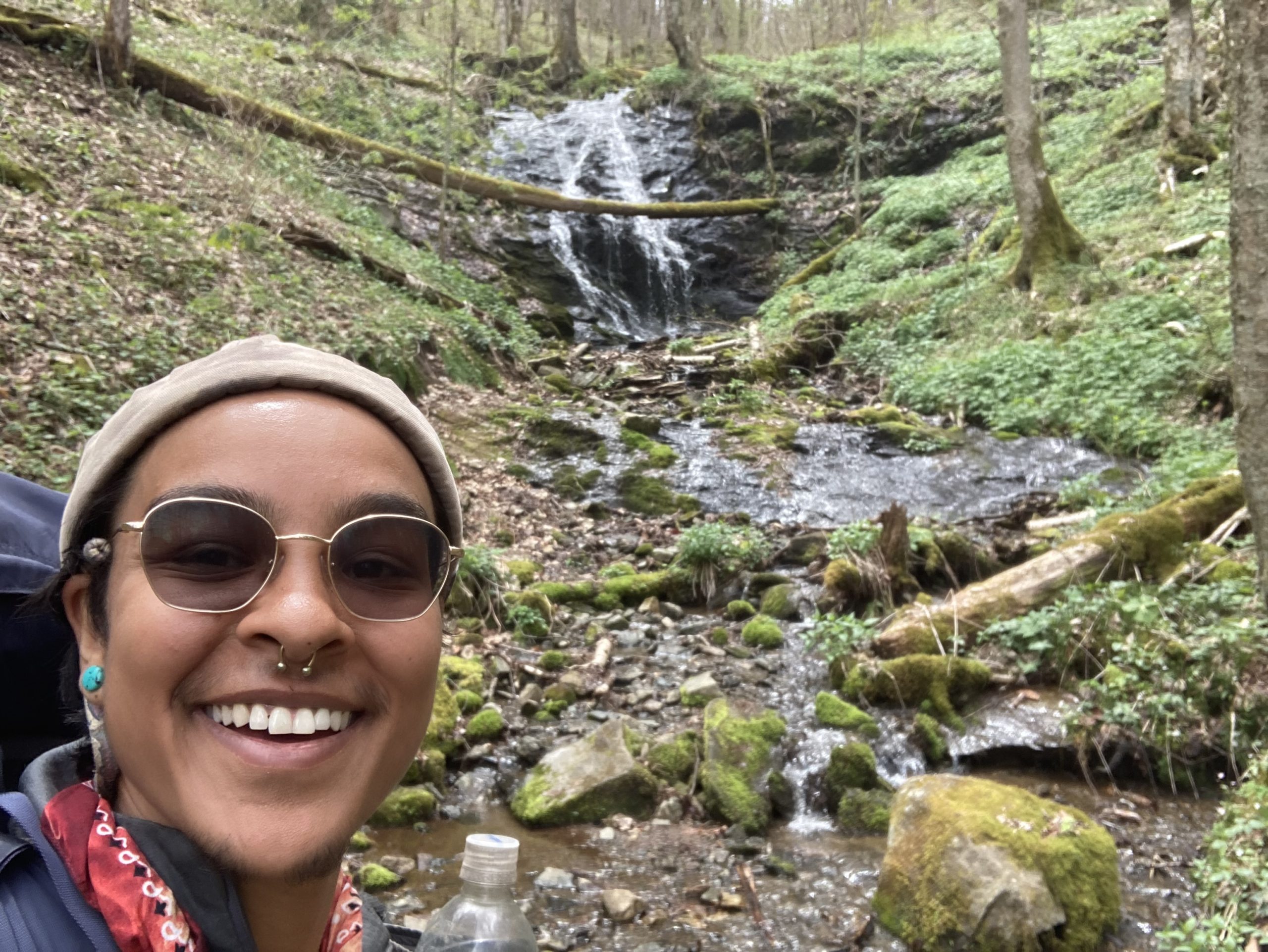