This was my best day on trail so far! I was out hiking by 8:15, ready for what was also my longest day on trail. When I first left camp, I almost started to go backwards, to which two older gentlemen told me to watch out or I’d have a trail name. Once I turned around, it was smooth sailing for the first 3.5 miles to the bottom of Sassafras Mountain. This was definitely the hardest climb so far, but it wasn’t too long of an incline, thankfully. On the other side of the downhill, there was a service road with some campsites. I took a pit stop here to use the restroom and then popped my headphones in for a bit. During the first album I played, I had a beautiful ridgeline to my left and that moment was the first time it really hit me that I live in these mountains. I feel exceptionally grateful to be able to call Shaconage my home for the next few months. Shaconage means “land of the blue mist” and is what the Tsalagi (Cherokee) Nation called what is known today as the Blue Ridge Mountains. It was absolutely blowing my mind thinking about how I am living in the ancestral lands of the Tsalagi peoples. It also makes me very sad though because I know the land would look very different in a positive way if Indigenous populations had not lost their sovereignty and in turn their relationship with the lands they inhabited for.

I eventually made it down to Justus creek where I stopped to have a snack with some fellow hikers. Anytime I stop, I like to take a moment to stretch out and move to keep my blood flowing. During this break, I noticed that my hiker stench was finally coming out!! That finally made the trek official to me. With my newfound smells, I happily threw my pack back on, picked another album and pushed on.

On my way up, across, and down Gooch Mountain, I had another emotional moment, but it was not particularly a happy moment. The song Sing About Me, I’m Dying of Thirst came on and I started to choke tears down. Listening to the song on trail for the first time really hit home with the purpose of my journey on the AT. For those unfamiliar, the song is about the responsibility the living have to those who have passed. I finally felt the weight of my goal to learn about my ancestors in order to revitalize their history, their knowledge and to share their sacrifices and trauma they endured so that we the current generations of Natives on Turtle Island could exist. Although it was a heavy feeling that had me struggling for breath a few times on trail, I am so glad to have felt the gravity of my goal early on so I can think back on that moment if I ever feel unmotivated.

The rest of the day rewarded me immensely. I had one more Mountain to climb, Ramrock, which I was trying to stop for lunch. I was incredibly exhausted and found a sufficient enough rock about a quarter of a mile before the peak and was too tempted not to stop early. It was just as nice of a view as any, so my stomach wasn’t feeling very picky. After taking a nice lunch break, I pushed to the top to receive my first vista on trail. As I walked out to the overlook I saw six red-tailed hawks circling the woods just below the overlook. Talk about epic… this felt like a monumental moment to me. It was incredible to see the land splay out for miles on end for the first time with some beautiful guests gracefully circling the sky. It almost felt like a welcome to me if I wasn’t such an existentialist.
The rest of the day was just the walk down into Woody Gap, where I camped on an awesome ledge. It was the coolest campsite I’ve ever stayed at in my limited camping experience and being near a major road, I got to FaceTime my love for the first time from trail! It was the perfect way to end a day full of all the highs and lows I could ask for on trail. 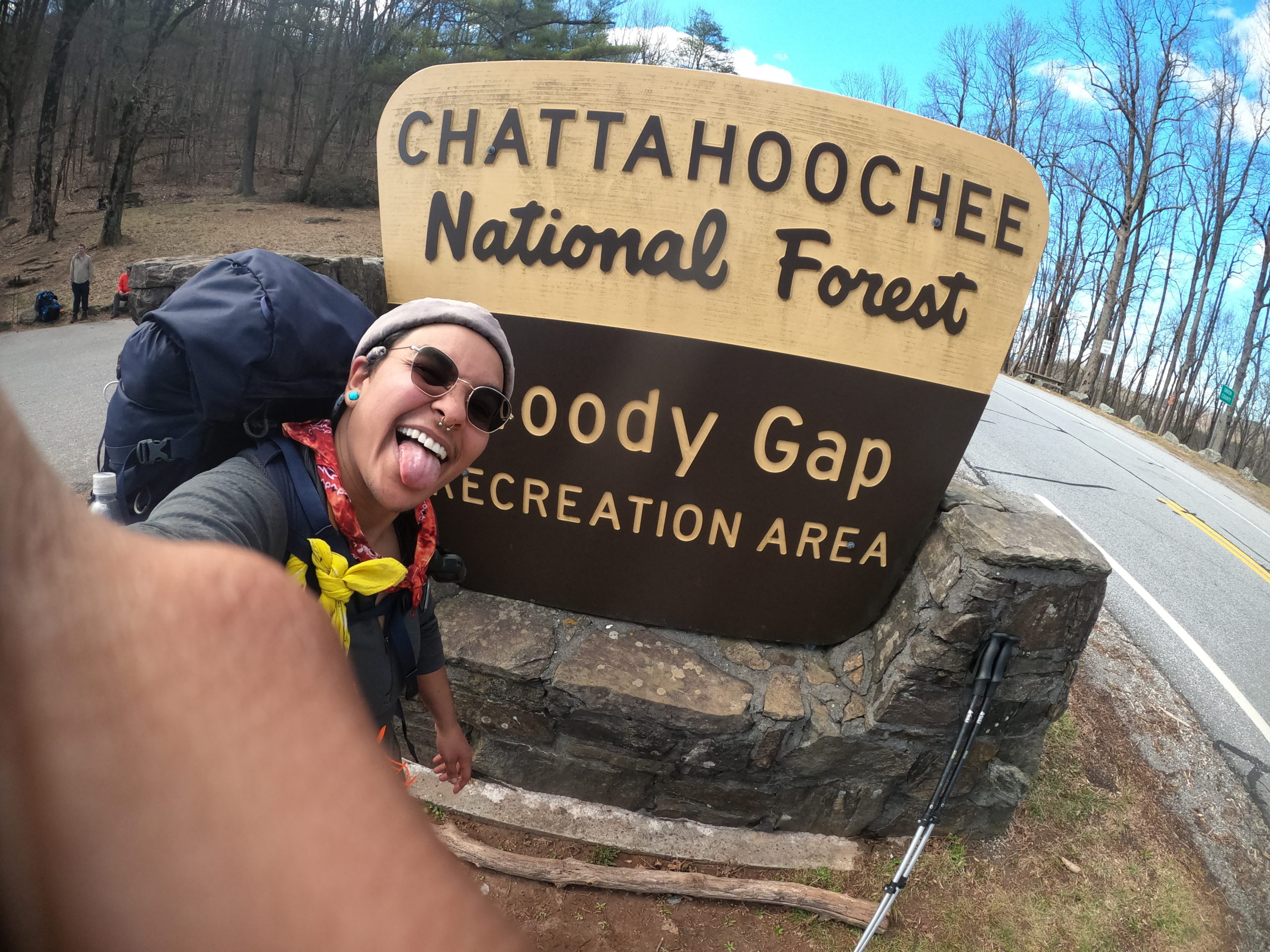 Directly after having my best day on trail so far, this day was my worst day on trail so far. As soon as I got on trail, my left ankle and the left side of that foot were experiencing shooting pain. I figured that I must have rolled my ankle worse than I thought the previous day. So, I decided to take it slow even though I knew there was a thunderstorm coming later in the day.

Over breakfast, two fellow campers sat with me. I asked them if either knew the alleged story behind the name Blood Mt. The older of the two guys told me he heard it was because of a battle between the Tsalagi and the Creek Nation, but I hardly believed it. Blood Mt. doesn’t seem like a fitting name for a war only between two Indigenous populations. War, for my ancestors across Turtle Island, was a ceremonial practice and it was enacted in a way that resulted in very few casualties because for their society, life was the most sacred thing. I do wonder (and doubt) if there is more information out there though.

About a mile and a half in was a very big clearing with a nice view, so I stopped to take a quick video. The next three miles or so were mostly downhill, but my ankle/foot hurt the worst on the straightaways, so for once, I was totally content going downhill. After I had my first snack, I popped in my headphones and, listening to two albums, pushed to the shelter before Blood Mountain. After debating if I should stop or continue to push on, I figured that since I was going to climb up a mountain (the tallest in the state), I should stop to eat first.

The shelter was about half a mile off trail, which I didn’t know and so I regretted my decision, but this mistake was the lesser of the two I made on this day. While having lunch at the shelter, two women came up and bunkered down for the night. One of them told me that the first storm was supposed to pass and then there would be a time of clear weather before the next wave. Without really thinking through my decision, I decided to push onto Blood Mt. before the storm cleared up. The climb up wasn’t bad at all, but 1.2 miles later and I was soaked to the bone and freezing. Since there were a few people waiting out the storm there, I threw my tent up to change into dry clothes for the night and I felt MUCH better after that. It was only 2:00 p.m., but I knew I couldn’t push the 2.4 miles down to Neel Gap. I spent the rest of the afternoon and evening alone and decided to give it a shot to call my love again to have dinner with her. Miraculously, she answered! It was nice to be able to chat with her and let my frustrations out from that day. Although I was upset I couldn’t push on, I was also glad I decided to stop for the sake of my ankle. Listening to your body is incredibly important for thru-hiking success! I guess I should work on listening to the weather as well…

P.S. I did take my tent down before going to sleep. Please do NOT use your tents in shelters.

Since I was only going 2.4 miles and my day prior was not great, I decided not to set an alarm for the morning. Waking up to the sun was nice for once! Since it had been bad weather, the fog was still very thick, but fortunately, it cleared up before I left! I got some wonderful pictures there and as I was coming down from the top. My ankle was still hurting, so I took it slow, and after about two hours of step-like downhill, I finally made it to Neel’s Gap. The downhill climb made me grateful for deciding to stop in the shelter the night earlier.

After buying a couple things I couldn’t find before I started the hike, I sat outside trying to find a shuttle to hostel somewhere because not only were the cabins too expensive (and big) for one, but the hostel at Mountain Crossing was closed. I went outside to search through my AWOL guide for an answer and as I was getting off the phone with the first person I heard someone say “Unmai!!” (I never said how to pronounce my name, I think… it’s OON-may for those wondering). When I looked up, I was greeted by B, who also camped at Woody Gap a few days before. This is where my luck turned around.

He was with another guy named Gump and they told me that they were going to rent a cabin with a married couple. Graciously, they were totally cool with me tagging along! We made our way down to the cabins to find out that we got there 10 minutes after they closed. I called the after-hours number, but the call dropped… it seemed the luck ran out. But it hadn’t!! Someone opened the door and rented us the last cabin available! The first shower of the trail was immaculate. We went back to Mt. Crossing and got a pizza for free! Following a nice lunch, I went down to a station where some college students were giving free massages. After what was probably a 45-minute massage I felt like I had a new neck AND back.

Later on, when we all grouped up, we went to a Cuban restaurant and to a grocery store to resupply. The couple rented the cabin for a second night and allowed us all to stay for a much-needed zero. I was very grateful for the spectacular stroke of luck I had hit! My ankle certainly needed the zero day, and I had even learned how to tape it up to give it support. I had high hopes that I would be able to hop back on trail just fine! 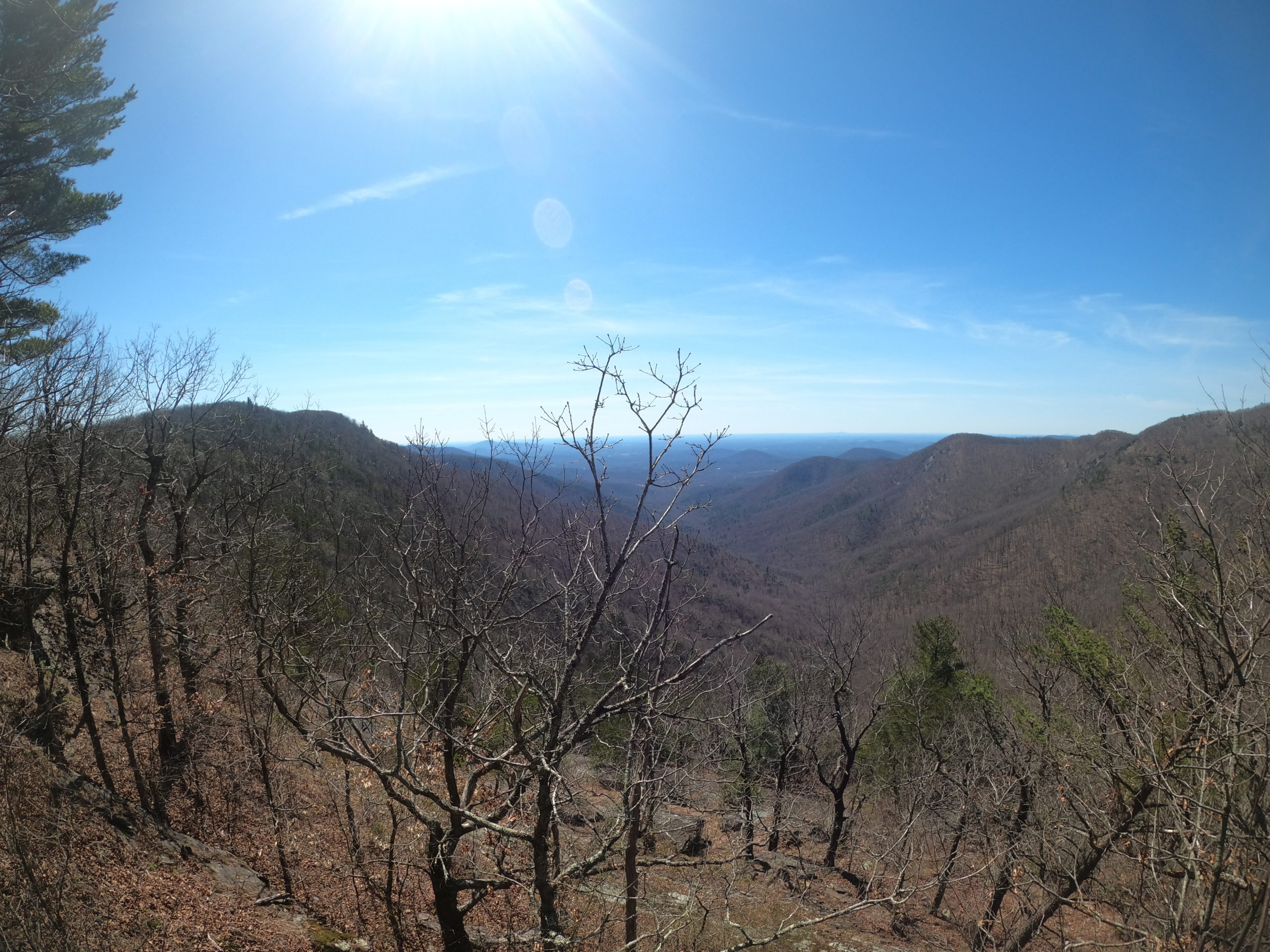 This was the best view I had on this day! These sights make the whole journey worth it 🙂