Pretty much everyone who stayed in the cabin the night prior had started back on trail around 9. Right before I started, I was informed that there was wifi near the trailhead, so I stopped for a while to let some podcast episodes download before I headed off. After the first, pretty steep, climb we all stopped for a snack break. I ate and stretched out a bit and we all were ready to push on. The first seven miles were pretty steep ups and downs, but there were sporadic views the whole time, so I was a very happy hiker. At some point the people I hiked with all stopped as I pressed on.
I was glad to find that my ankle was not experiencing pain, but my knees certainly started to ache from the steep downhills. When I reached Tesnatee Gap (derived from the Tsalagi word for Wild Turkey), I received my first trail magic! One mandarin down and I was ready to head up the steepest climb of the day. The climb rewarded all who climb it more with more wonderful views though!
I listened to an episode of a podcast called All My Relations, which is a podcast hosted by two Indigenous women that have guests and talk about all kinds of Indigenous things. I am grateful that my love found the podcast because I know it will fill my whole AT trek with knowledge I have been searching and thirsting for (Shoutout to my love for finding it the other day). This episode inspired thoughts in me about being more uncompromising in my beliefs. Not in the sense of not changing them because I never want to be inflexible to that, but in the sense of owning up to the knowledge I do have. Malcom X was a beautiful example of this and I hope to gain that skill as I dive deeper into the knowledge this podcast will grant me. It has added a new layer of excitment to the next several months! 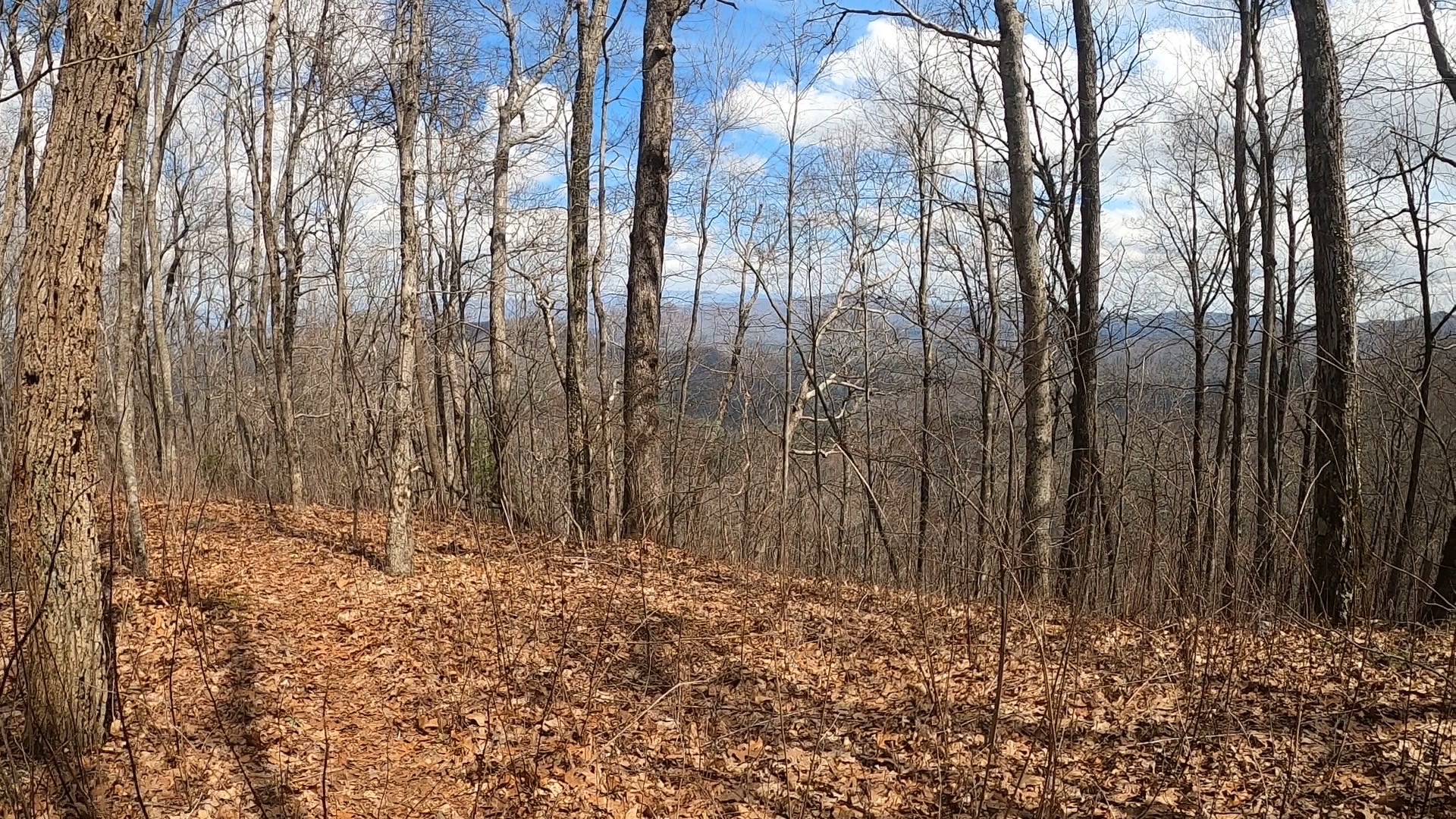 The beautiful view from the shelter! 🙂

The night before, I heard a Screeching Owl for the first time and it actually terrified me for a while. I was always under the assumption that owls only go whooowhoo, so hearing screaming as you’re just getting comfortable in your sleeping bag is quite the shock.
Lingering feelings from the night prior resulted in me having a hard day mentally. I noticed some people I had been camping with were consistently doing things that ignored the principles of Leave No Trace. For those unfamiliar, Leave No Trace are a few practices that are very important to follow when recreating in the outdoors. It was on this day that it really began to bother me. Whenever people make the decision to place themselves back into nature, it is their responsibility to know how to navigate within the given place in a respectful manner that results in as little harm as possible. I find that the only good decisions one can make are informed ones, which is why research is an essential component to any decision. Unfortunately, the people not being respectful also did not seem the type to listen openly to someone trying to correct their actions. So, I left camp still frustrated from the night before.
The terrain for the day was not bad though. I was glad I did not have to compound heavy physical exertion on top of the mental day I was having. With my head in the dumps, I made sure to soak in the beautiful ridge lines that were visible on this whole day. It didn’t necessarily stop my brain from going back to not as great times in my life, but it did make things feel lighter. Going through this section of forest was also the first time I saw a significant portion of the woods down the side of the mountain I was hiking on. It was very serene to see through the woods so far and reminded me of running around them as a child.
Once I made it to the shelter, I soaked up the view for a bit and then uncharacteristiclly took a spot in the shelter due to a thunderstorm rolling in. So it seemed better to keep my tent in my book bag. The next day’s hike was up and over two pretty high mountains, so it also seemed that the weather would force me into taking a zero the next day. The storm ended up getting pushed in another direction, but my knees were certainly happy to have a break.

Refreshed after a zero day on Blue Mountain, I was ready to tackle a 12 mile day again and NOT have resulting this time. When I got down to the gap, called Unicoi, there was a generous juman making pancakes and sausage. I thoroughly enjoyed some and downed some OJ before I continued to press on. I later learned that the highway at Unicoi gap is one of the many roads that were originally trailed burnt out by indigenous populations. The Tsalagi Nation created the trail as a major trading route between modern-day northern Georgia/western North Carolina to where Knoxville is in Tennessee. Most, if not all, of the major highways in the US were paths that Indigenous populations created in order to trade with each other. One of these roads were even made to transport buffalo into the north eastern part of this country.
The next gap I got to was called Indian Grave Gap, which made me more uncomfortable thinking about how not too long ago I passed by Blood Mt. AND Slaughter Creek. I find it very unsettling the ways that geographical names can retell history in more accurate ways than textbooks, but I digress… the next climb was Tray Mountain and it surely kicked my a**. I started hiking up with someone named Monterey, who was incredibly fast. I found myself gasping for breath between words during our conversation. After taking a much needed breather, I continued alone so I put on a podcast.
In the episode I listened to, the hosts had two guests on that identified as two-spirit individuals, like myself. It was a great conversation. Later on in the episode, one of the guests was speaking in the people they have lost due to various reason and how one can ethically mourn a lost one. They brought up the point that nothing can take the pain completely away, but expressing those feelings in the form of writing, dancing or otherwise can make the feeling bearable. By putting those feelings into art one is able to transform that into something bigger than the feeling itself. I stopped at a perfectly timed overlook and thought of the Tsalagi who suffered in these lands and lost their lives for it and almost wept on that rock. It gave me a lot of hope for what I am doing and that is a feeling that has been scarce in my life the last couple years.
A group of people I had been with before were at the next shelter when I arrived, so I sat to have lunch with them. I was happy to get some kisses from one of the hiker’s dogs! The next 4.7 miles were mostly downhill, which was unfortunate for me because it was the day I had the worst knee pain. To put it into perspective: it might have felt better to have someone actually hit my knees with a hammer with each step down. I did eventually make it to my campsite, which had the coolest water source coming out from under a tree. After a much needed cork ball massage I was happy to caught some sleep that night! I felt like it was a very successful 12 (almost 13) mile day. 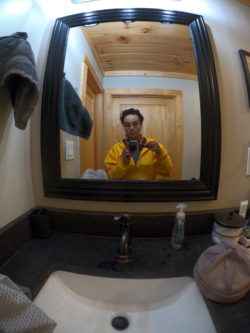 Before a shower (STINKY) 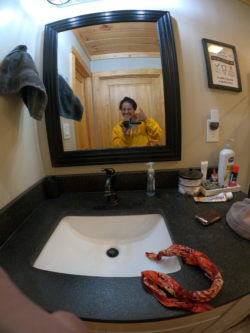 After a shower (all smiles, but still some smells)