This day was an incredibly pleasant day from start to (almost) finish. I woke up and did not have any pain aside from some achy knees. As soon as I was about to throw my pack on, B rolled up to the gap. We spent the rest of the day hiking together. There were two mountains to hike up and over that day, so we both put headphones in to rock out some miles. Of course, I picked Kendrick Lamar. The last time I listened to his album Good Kid, m.A.A.d City it made me very sentimental, but this time it put some drive and motivation in me. The first knob rewarded us with wonderful views and I soaked it all up before we pressed on.
Next was Kelly Knob, which provided what I found to be the most beautiful ridgeline on trail so far. Since today seemed to be providing amazing views, I took a side trail to a vista where I saw the first big body of water from trail! Lake Burton smiled back at me in all its glory from below.
Unfortunately, the rest of the day was downhill, and both B and I got restless near the end of the hike. It seemed we would never get to the road, but as always on trail, the downhill eventually ended. It surely was too steep and long for our knee’s liking though (about 3 miles to be exact). We took a beat across the street at a picnic table before we walked to the hostel. Dick’s Creek (the gap we stopped at) is where gold was initially found in Georgia during the 19th century and this is what put the process that led to the Trail of Tears in full motion.
At the hostel, it was wonderful to shower and get some laundry done! B also bought a pizza for us and I was able to do my resupply. The best part of the hostel was a FOOT MASSAGER(!!!!), but they also had massaging guns as well. I kid you not, I used the foot one for probably an hour. If you ever hike the AT, stopping at Around the Bend is a MUST just for the foot massager alone. After a wonderful day of hiking with a new friend and a fantastic full-body massage, I slept very well in my bunk that night. 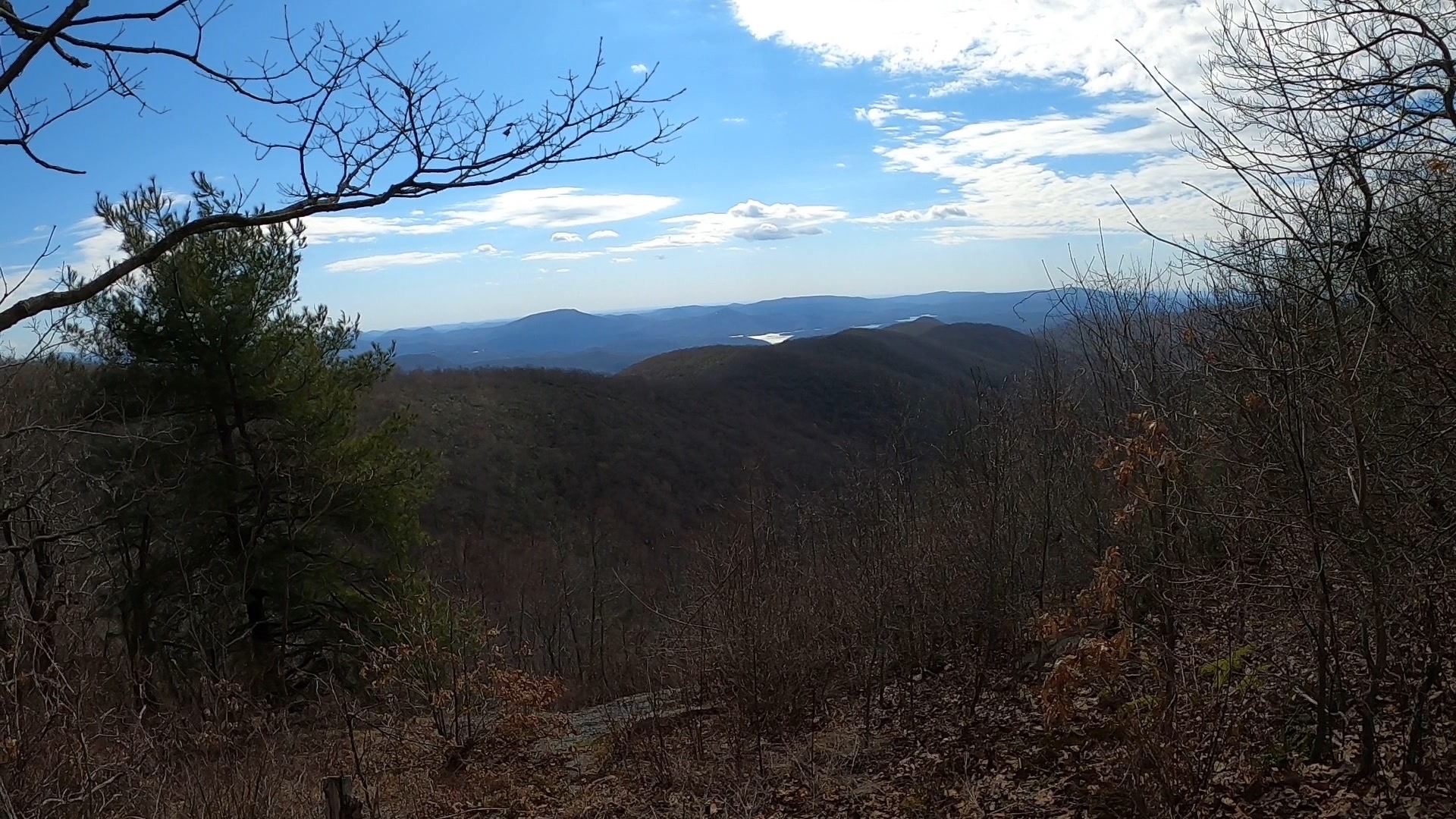 I woke up excited because I knew I was going to make it back into my home state! After a quick shuttle to the trailhead and warming my back up, I embarked on what turned out to be the windiest day of hiking I think I’ve ever experienced. After six miles, three peaks, millions of snot rockets, and continuous wobbles in the wind, I was ready to take a lunch break at the next gap. I was hoping the wind wouldn’t be so rough there. Not only did I happen upon trail magic, but I also caught up with some hikers I’d been around since the beginning! This was my favorite trail magic so far because I had ice cream for the first time since I hit the trail!!! I was VERY happy about that, no matter how cold the wind was. I also had some fruit and apple juice and then hit the trail, determined (and fueled by ice cream) to get back to North Carolina!
It was a three-mile climb, sponsored by Kendrick Lamar of course, to get to the border. When I got there, a group of five hikers that I also had hiked around since the beginning was there. It was nice to have people to celebrate the victory with. It was a short-lived victory, however, because the climb right after arriving in North Carolina was one of the toughest yet. Not to mention the wind blowing everyone sideways. When I got close to the shelter, I saw some tents set up before the shelter. Considering I hadn’t had a full meal that day, I eagerly veered off trail to set up my tent. I was only a few feet from the shelter, but my body was beat from a day of uphills, raging wind, and a smaller amount of food than one should be eating on trail. Although it ended up being the coldest night on trail so far, I slept like it was my job. 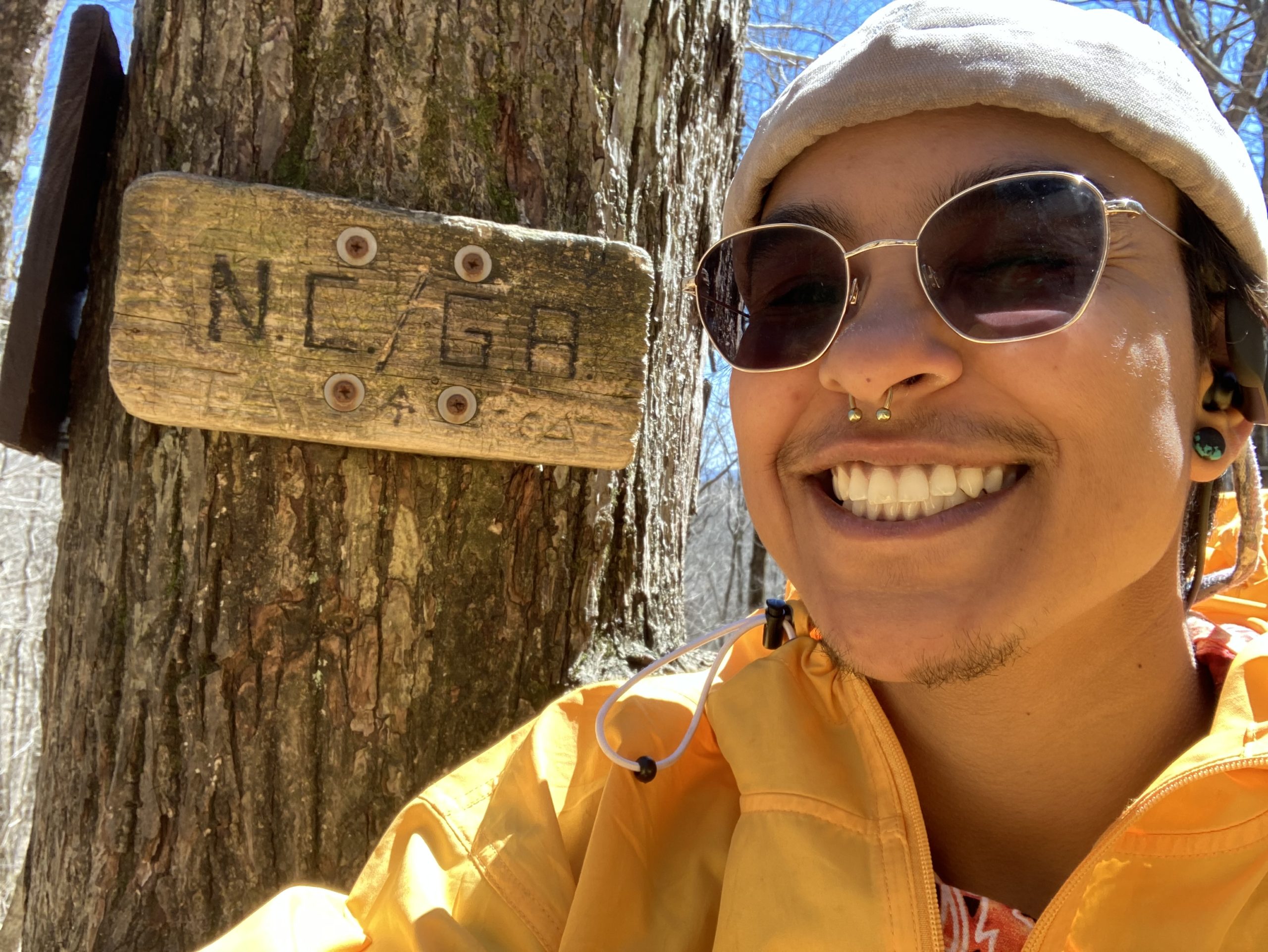 I never thought I’d be so happy to be back in NC.

The coldest night in turn provided us all with the coldest morning on trail so far as well. It took me longer to get ready than any other morning, so I suppose the cold really got to me. I was still excited for my first full day in NC though! While filtering some water, I unfortunately got my gloves wet (another lesson you only have to learn once). So, I had to be innovative and wrap my hands up in my rain jacket sleeves; it worked perfectly! The first four miles were very easy to cruise down to USFS 71, which led to the bottom of Yunwitsule-nunyi, which translates in English to “where the man stood” (it is now called Standing Indian Mountain).
I had planned to stop at the shelter, but after committing the sin of having a Pop-Tart, I was still pretty full. Luckily for me, the wind died down almost completely by the time I peaked the mountain and it was one of the most beautiful mountains I have ever been on top of. A rush of happiness filled my brain and I smiled from ear to ear looking around. I was more than happy to plop down at the best lunch spot I’ve been at on trail and I felt grateful to be in a place of Tsalagi Mythology. It is a special place of protection and I felt very relaxed and joyful eating lunch there. After a nice sit back to really soak up the sun and views of the land, I stretched out and pushed on.
The rest of the day was mostly downhill, which made for relatively easier terrain than the first half of the day. I learned a lot coming down Yunwitsule-nunyi about some differences in schools of feminism as well as the different modes of colonization. It was the introductory episode of the All My Relations podcast, so there was a mishmash of other topics regarding indigeneity covered. This podcast has been changing the way I view Indigeneity and has filled in a lot of gaps already that I didn’t expect to find knowledge on. I am glad to gain this language in order to share it with others in the future.
I rolled into camp a bit earlier than I expected, which was a pleasant surprise, and booked a bunk at a hostel in Franklin. Although I hadn’t hit the official 100-mile mark on trail, I had gone just over 100 miles total (counting the approach trail) on this day. I celebrated by having some ramen with tuna and a beautiful brew of tea. 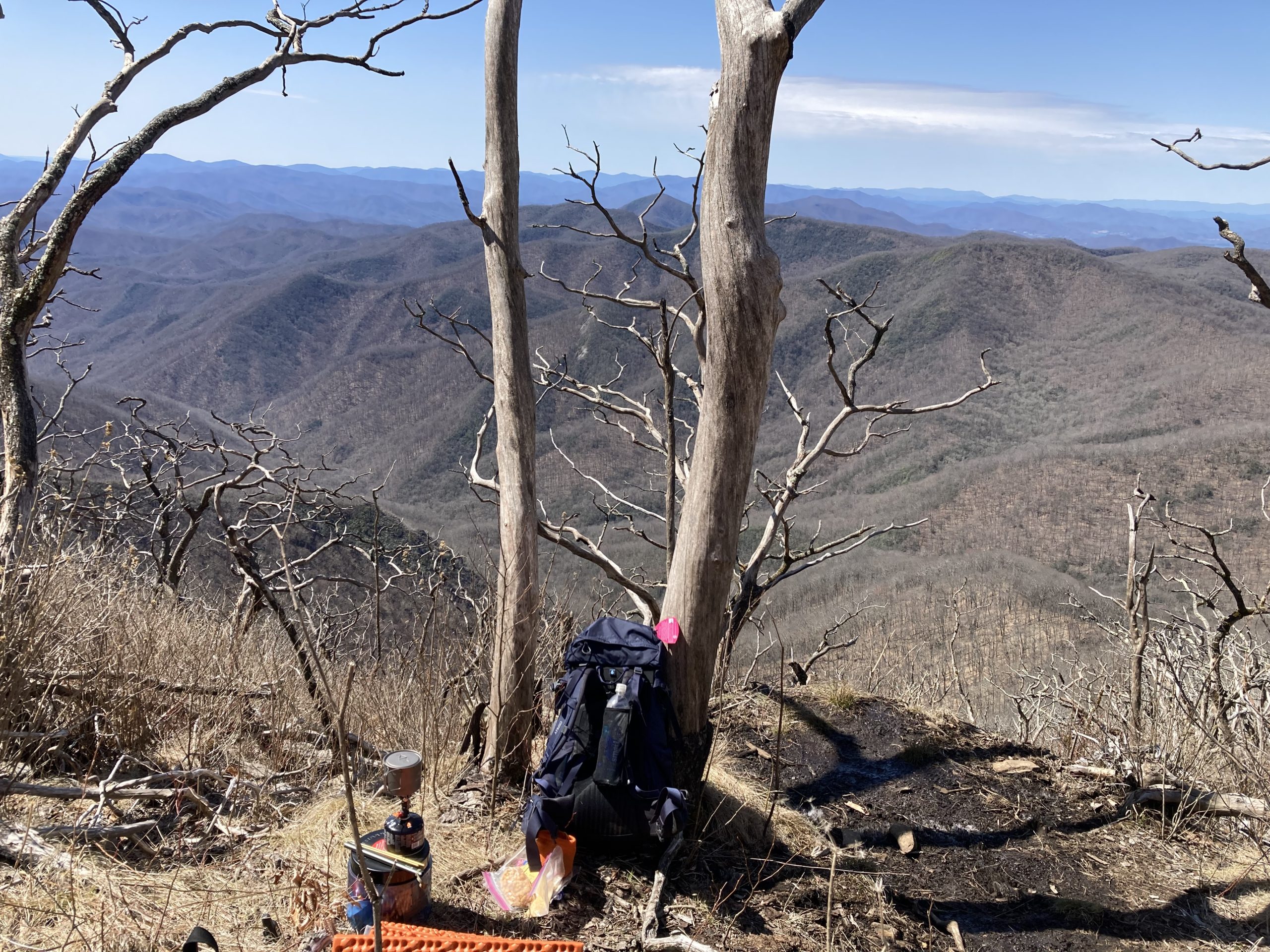 My favorite lunch spot so far on Yunwitsule-nunyi! 🙂 🙂