Continuing southbound in Virginia, I’d tackle rugged and picturesque terrain in the Blue Ridge Mountains.  But I never could have imagined the coyote conundrum I’d face on Day 103.  Here are the daily details:

Getting soaked – yet again

As I dragged my pack out of the hostel shuttle at Rockfish Gap I had two thoughts:

Unfortunately the weather wasn’t improving, with a humid high 80s day and thunderstorms predicted.  Handling the Virginia heat was proving to be very challenging for me.  I sweat fairly heavily at any summer temperature, even without a 30+ pound pack.

When the initial trail miles started downhill from 1900 foot Rockfish Gap I ended up with a soaked shirt within 45 minutes!  Here’s what I find below 2000-2500 feet in the South:

Can we talk about cicadas?

Is there an insect with a more annoying sound than a cicada?  Here are just some of the adjectives I’d use to describe their noises:

To a New Englander like me, these bugs come straight out of a horror movie.  The Friday the 13th movie series didn’t need to come up with that famous “ch-ch-ch-huh-huh-huh” background sound – a recording of cicadas would have been sufficient.  I’m also fairly certain that there’s a cicada background track in the caverns of hell.

Anyway, I’d eventually claw my way above the 2500 foot level on Humpback Mountain to less bugs, no cicada noise, and that blissful breezy ridge air.  I’d manage to get a couple uber-hazy views in, like this one: 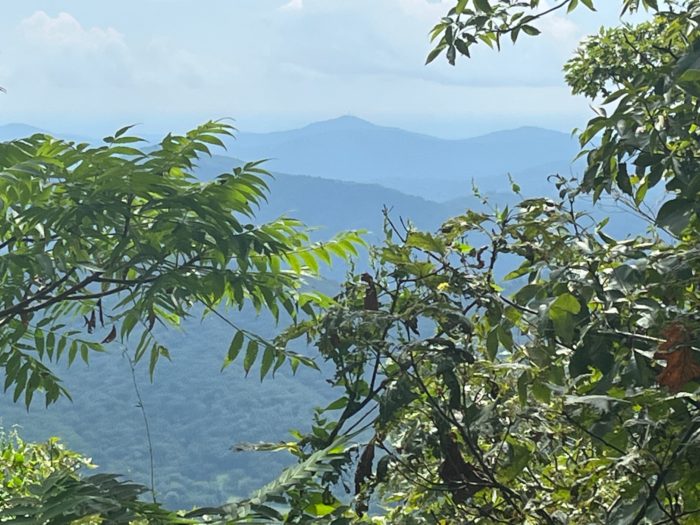 Then, two torrential mid-day thunderstorms would soak me in a different way.  It was the fifth straight day of on-trail rain.

Closing out the day

After the second downpour ended, the trail was a mini-river but the clouds opened a bit.  I got a great valley panorama from Cedar Cliffs that I thought would be my MMM (Most Memorable Moment) – but it would be downgraded to a co-MMM quickly.

About three miles from the end of my hike I was on a sloped trail with four foot high greenery on each side.  Suddenly a heard a loud grunt and scrambling about 3-4 feet uphill to my left.  A bear – probably asleep until I woke him.  I was so startled that I took two steps backwards – and promptly fell off the trail into greenery on the downhill side.  The bear departed instantly but I was pretty shaken by how close he was.  It was my eighth bear incident on my trek – and believe me, eight is enough!

Bring on the brewery

So, soaked and rattled, I really needed a couple of beers at day’s end.  Though I had to wait nearly 40 minutes to get a hitch to Devil’s Backbone, it all became worthwhile! 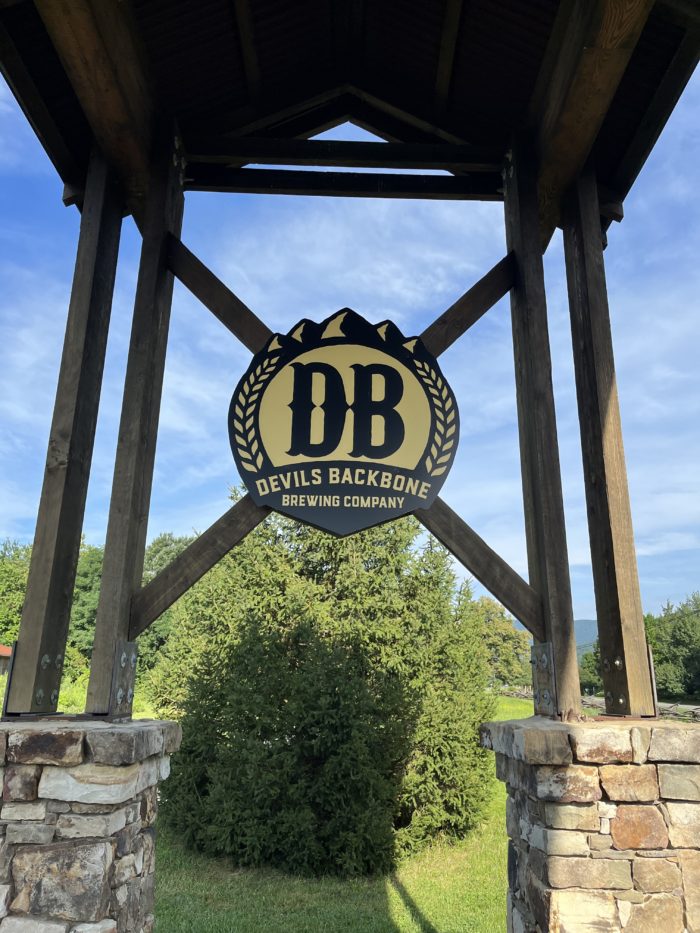 I found the food (12 hour smoked pork shoulder – yum!) to be much better than the beer there.  The only beer I really dug was the Cyborg Brain Juice IPA, a dank hoppy winner. 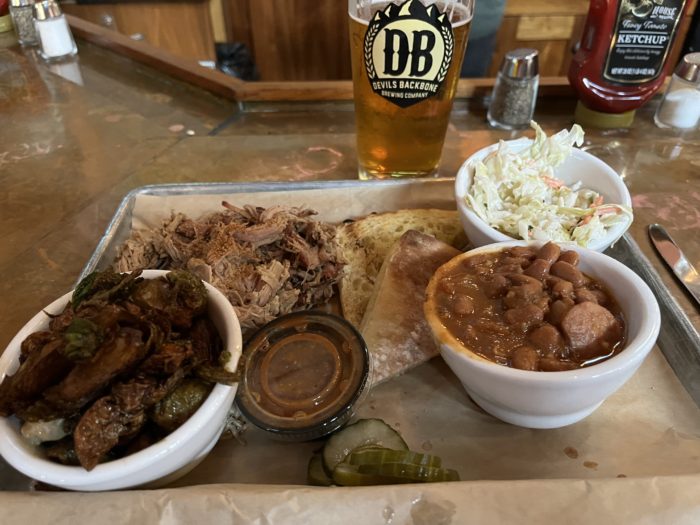 And the outdoor seating area was cool: 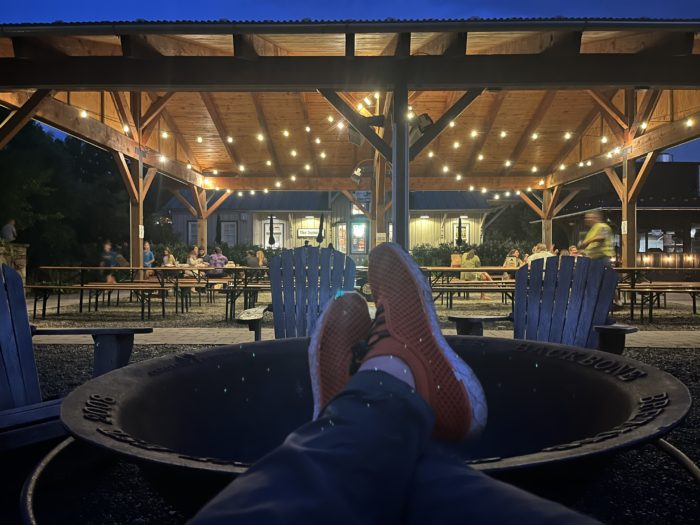 A visit to The Priest

I was looking at a 16 mile hike on Day 101 – not high mileage for me – but I fully expected to be worn out by day’s end.  The key segment of the hike would be a 3100 foot elevation gain in climbing The Priest, an imposing 4000+ foot peak. It would be a late afternoon climb too, on legs weary from earlier peaks.  Here’s what I saw waiting for me as I descended to the Tye River in early afternoon: 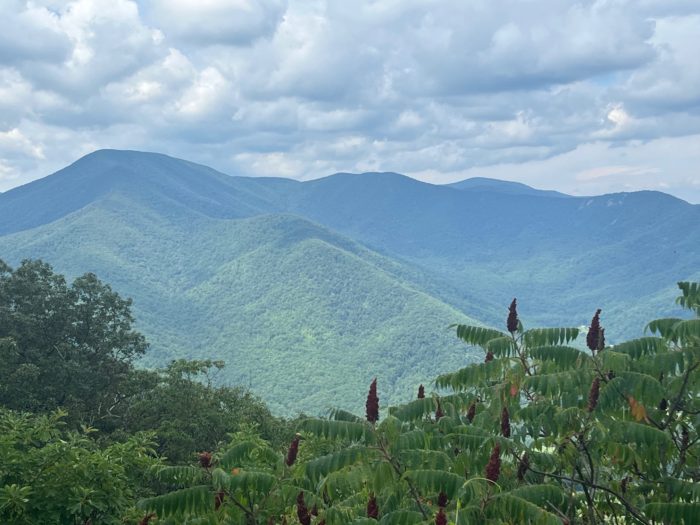 The Priest would prove to be an exhausting climb.  When I reached this outlook after a relentless uphill push I thought I was close to the top – until I checked the Far Out app and learned my elevation was only 2925 feet! 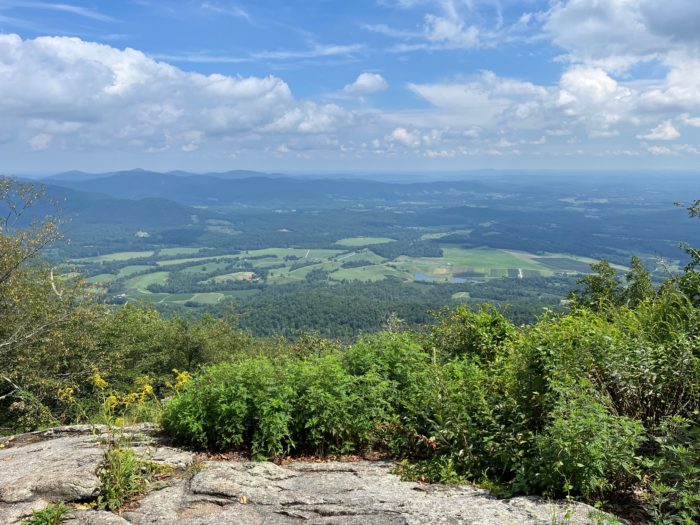 I still had over 1000 feet to climb!  The reward at the upper cliffs, however, was well worth it: 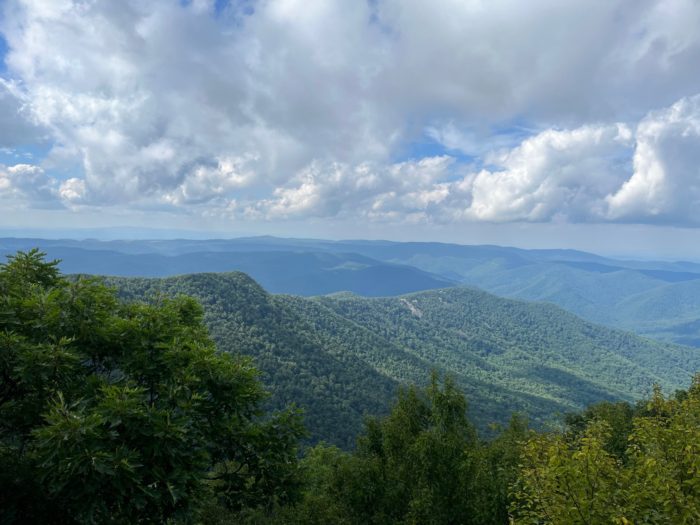 A rant about summits in Virginia

So I’ve got a bone to pick with the trail builders in Virginia.  I first noticed something fishy when I took a side trail to the top of Stony Man Mountain.  After a short climb, a sign directed me to the “summit” – which turned out to be a flat walk to a viewpoint which passed by numerous higher spots on the way!

I’m sorry but is there some local interpretation of summit that I’m missing?  Meriam-Webster doesn’t think so:  top, apex, especially: the highest point, peak.

I then encountered an even more egregious summit offense on three peaks: not even providing a trail to the actual summit!

Such tactics would never cut it in New Hampshire, where trails will bring you to the summit of even a wooded peak.  Usually there’s a small sign or just a cairn to denote it. Without this, you’re depriving people of that sense of accomplishment (not to mention the social media photo op!)  People want this!

Rain dominated Day 102, but I did have some views from Spy Rock in the morning: 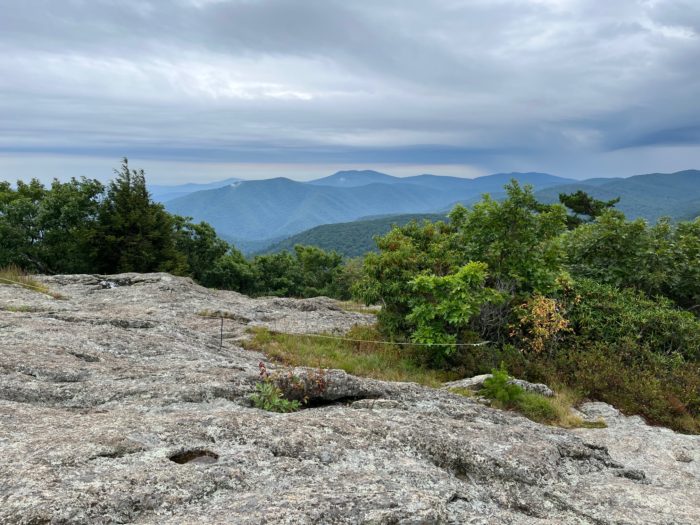 But unfortunately the weather never cleared up on Cole Mountain’s beautiful open meadows.  All I got were spooky images like this: 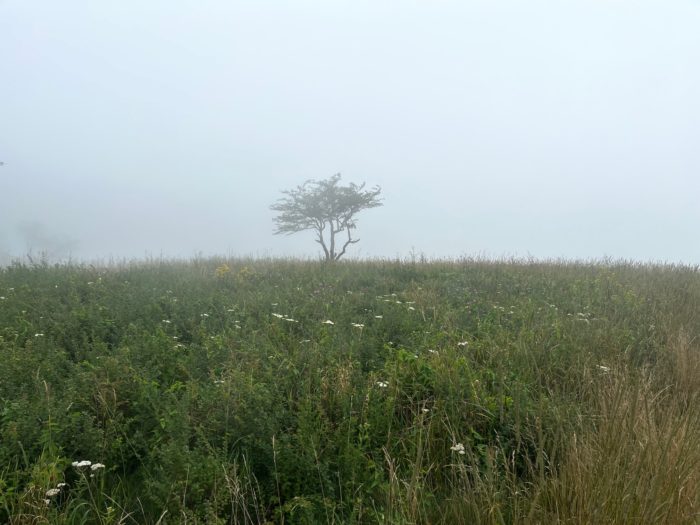 Which brings us to Day 103, or Coyote Day as I now call it.  In early morning I descended the ridge to the Brown Mountain Creek area, where the AT followed the creek through a notch for about four miles.

About a mile in, I started hearing noises down the trail.  Some type of barking or woofing.  As I drew closer I recognized it as coyotes – barks and those high excited yips that are truly frightening.

I saw someone at the shelter and stopped to get what he knew.  He said there was an animal kill very close to the trail about a half mile down.  He saw vultures circling yesterday and the coyotes started arriving at 4am. He guessed that there were 20-40 animals down there now.  It certainly sounded like it to me from the volume of barks and yips.

So I quickly assessed that I had four options:

On my trail app I found a gravel Forest Service Road that connected to the AT two miles past the shelter.  Unfortunately I’d have to backtrack two miles then hike three more on the connecting road.

I certainly was disappointed that I had to bypass two miles of the AT, but I do value having all of my limbs.  In discussing the incident with two hikers that night, they assured me that missed AT miles for a safety concern are acceptable for a thru-hike.  Makes sense – there are detours for forest fires and washed out bridges as well.

I actually got some beautiful scenery on the detour, as yellow and black American Goldfinch birds undulated across a green field: 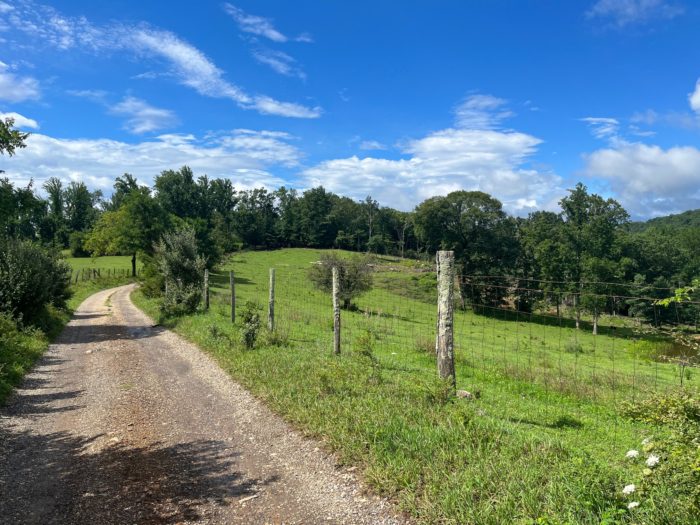 But I was certainly happy to see this sign again, without any barks to be heard: 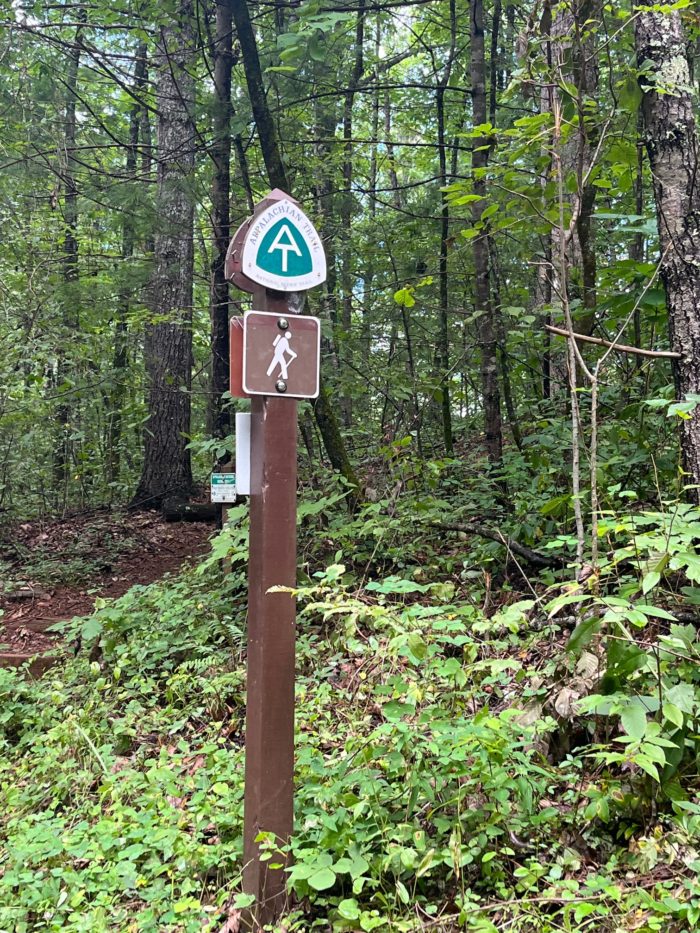 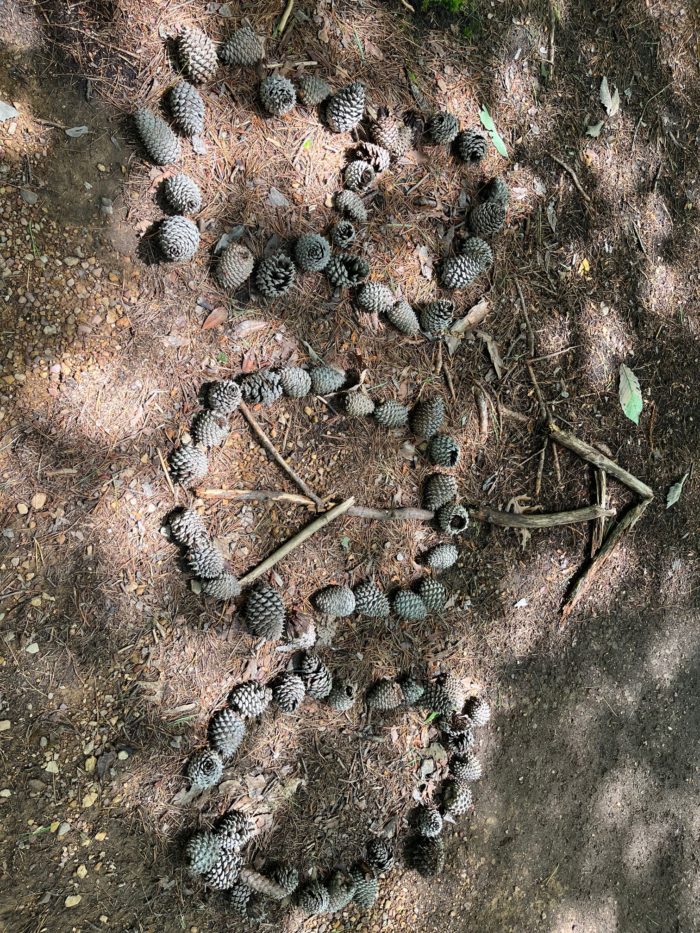 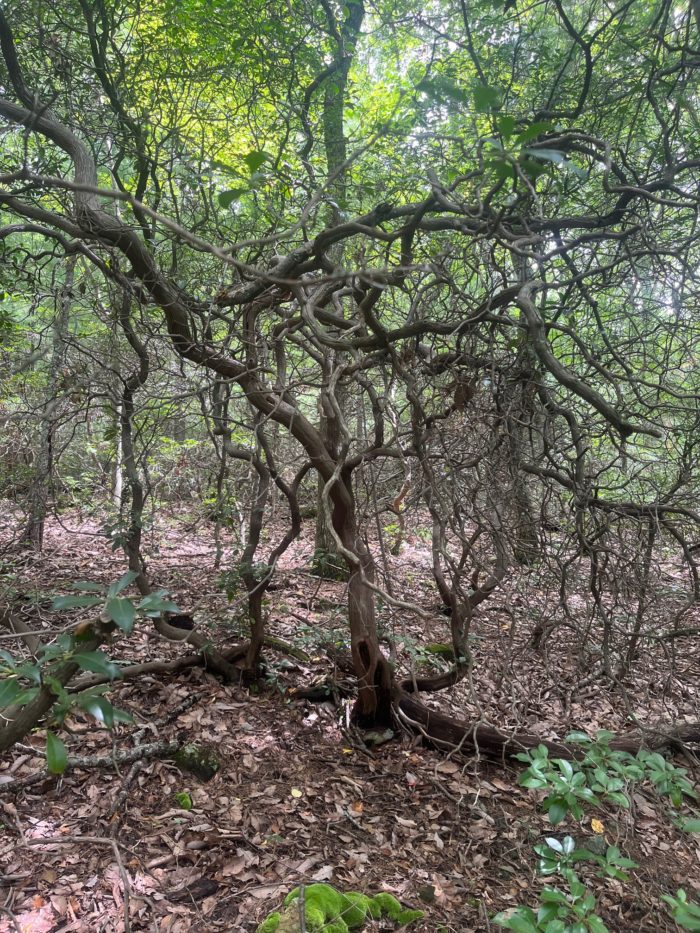