Most days on the AT bring a pleasing mix of nature and scenery — but some days really stand out as epic.  Day 104 in Virginia’s Blue Ridge Mountains hit that special category for me. Here are the daily details:

I’d been on the southern leg of my AT flip-flop hike for exactly two weeks when Day 104 arrived.  Now I’m not sure that many of you realize how hard I’d been pushing since starting the southern leg of my trek.  After my four day travel and rest break I put in 14 straight hiking days without a rest.  Yes, I’d stayed at two hostels but those were afternoon arrivals and early morning departures.  I needed to take a zero day, and I had it in my sights for Day 106.

With my target destination 38 miles away I had hoped to put in a big 20+ mile day earlier in the week.  But that plan got blown up by the coyote incident of the prior day.

That’s no way to start a relationship!  But, ah yes, the slightly cooler, rain-free promise of Day 104 loomed before me.  And as an early sign of that promise, as I hit the trail at an early 6:55 AM I heard the unmistakable sound of frenzied coyotes down in the valley to my left.  It appears that the coyote convention had moved to another venue, but I was headed right up the ridge – away from the frenzy.

A high-energy early morning burst put me on top of Bluff Mountain at 7:33 AM, just in time to catch this beautiful rainbow stretching over an endless valley below: 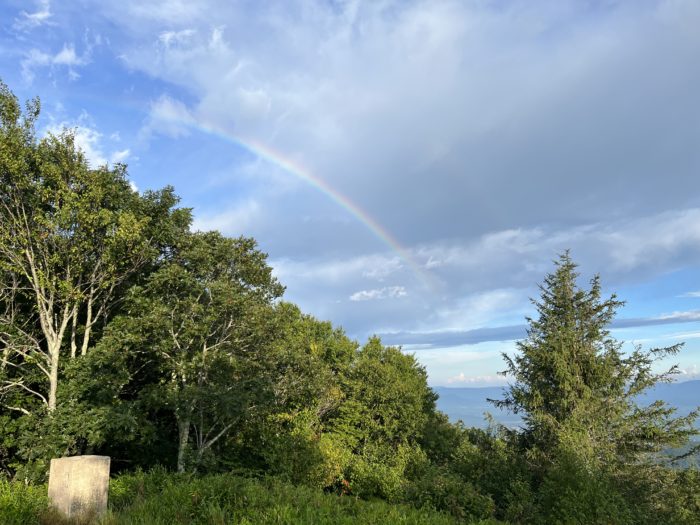 Oh yeah, I was pretty sure it was going to be a special day right there and then.  My MMM (Most Memorable Moment) had popped up in the first hour of my hike,  But the next eight miles on the ridge kept trying to top that moment: 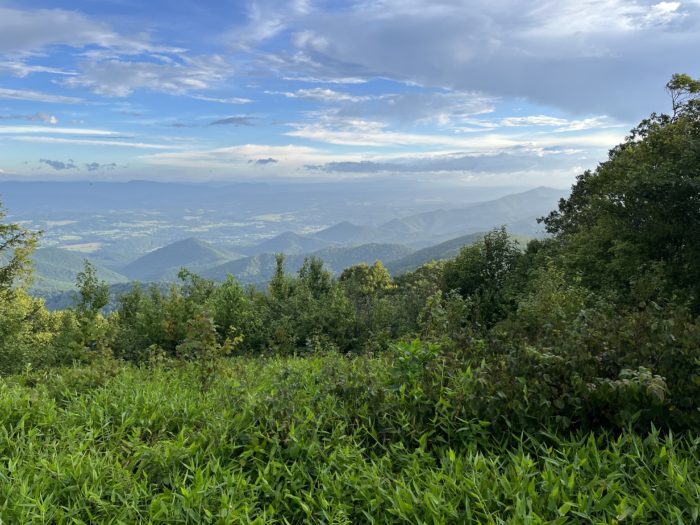 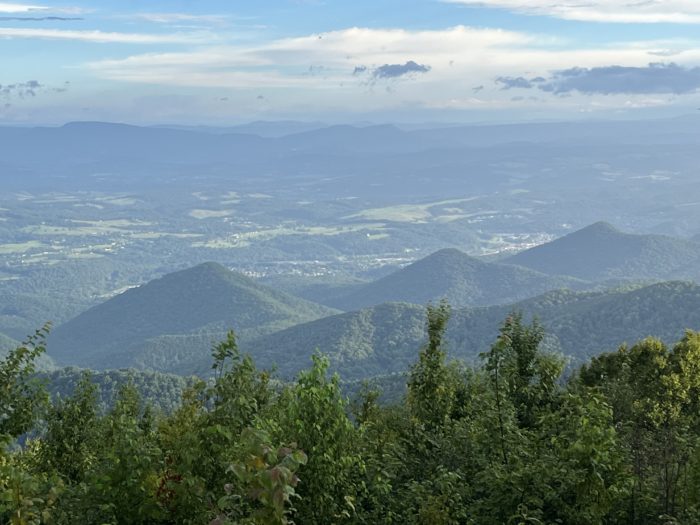 And how about this incredible view of the James River valley from Fuller Rocks: 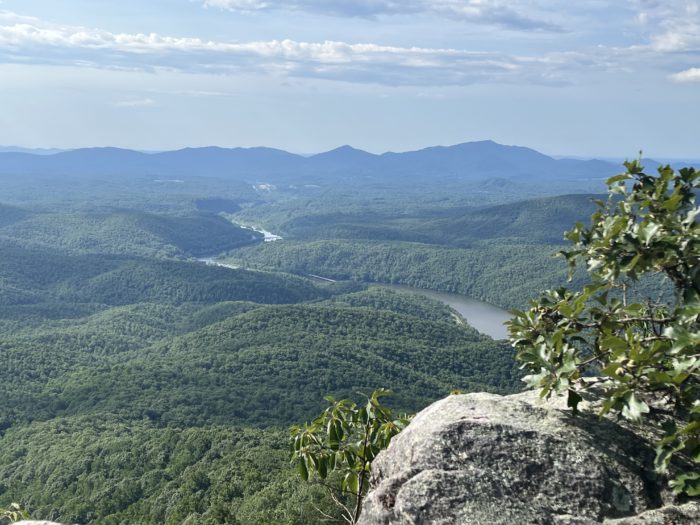 As I passed over the ledges of Fuller Rocks, I felt that it was one of the most appropriate place names I’d encountered on the AT.  I could just picture an early visitor declaring “this place is Fuller Rocks!”  Because it was, about a mile on each side of the actual cliffs.

Close to the edge, down by a river

Somewhere in this chronicle of my mountain journey I need to make mention of some music that has resonated in my head almost daily since Day 50 back in green Vermont.  That would be Yes’s brilliant “Close to the Edge”, the 18 minute anthem which takes up an entire album side of their three song prog rock masterpiece Close to the Edge.

I discovered Yes in the mid-1980s in college, blown away by their multi-part songs, phase shifts and cryptic yet deeply moving lyrics.  It’s a testament to their unique music that a fifty year old album has such a hold on me.  “Close to the Edge” seems to be particularly suited for thru-hiking, with “I Get Up, I Get Down” and “Total Mass Retain” (i.e., can’t lose more weight!) being two of the song’s segments.

Anyway, I was close to the edge on Fuller Rocks, and soon I’d be down by the very James River that I was gazing at from above. 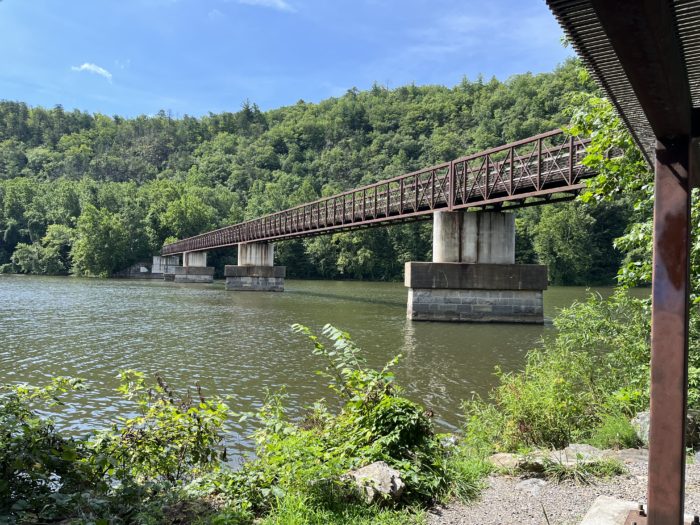 And there it was – the famous river where Jamestown became an early settlement.  (No sign of the Susan Constant, Godspeed or Discovery from my vantage point on the footbridge!)  And that brings up an intriguing factoid – that the pedestrian-only bridge over the James River is not a “footbridge”, it is actually the “Foot Bridge”, named after a hiking guy named Foot!  Don’t believe me?  Read the shoreline plaque: 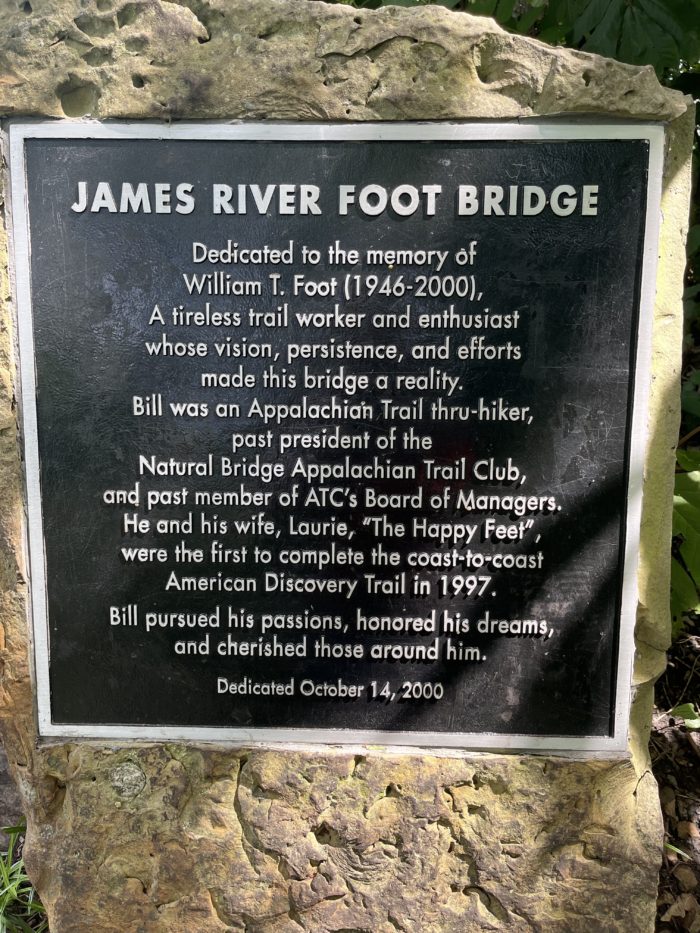 Hilarious!  In one way, it’s quite a relief to us thru-hikers.  It’d be a much more agonizing crossing if his surname had been “Hand” or “Butt”.

Rousing a family of partridge

Later that afternoon my hiking steps caused a huge stir to my left as a big group of partridges, small and large, took off in flight.  Would that mean that I stirred “The Partridge Family”?

As you might expect, given his wide frame and not-so-athletic build, agent Reuben Kincaid was by far the last bird off the ground.  Mom Shirley and slender Keith and Laurie were off early, Danny (as usual) found his own way forward and Tracy and Chris – well, you don’t care do you?  Were there ever two more anonymous “younger kid” characters on a sitcom than those two?  They seemed to have not an ounce of personality between them!

All in good fun! C’mon, get happy!

On the ridge opposite the river the great views continued from chiseled staircases: 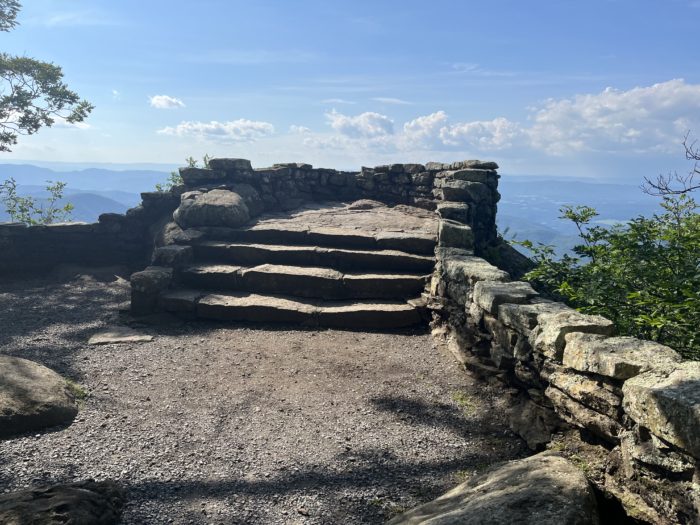 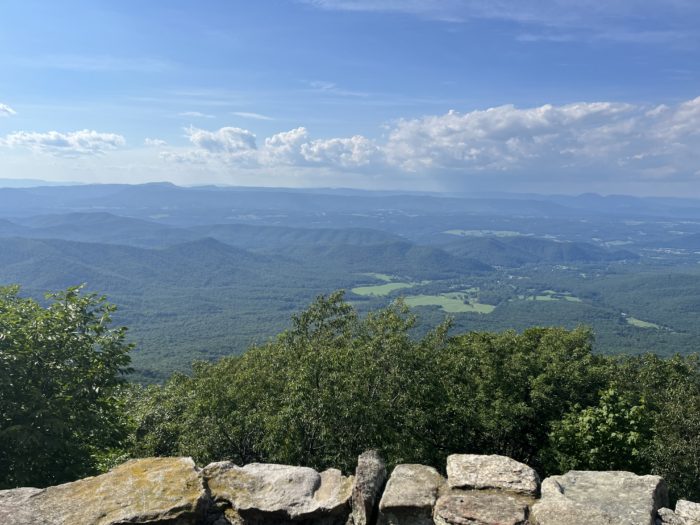 And early Day 104 brought more of the same, including this AT passage under a precarious rock: 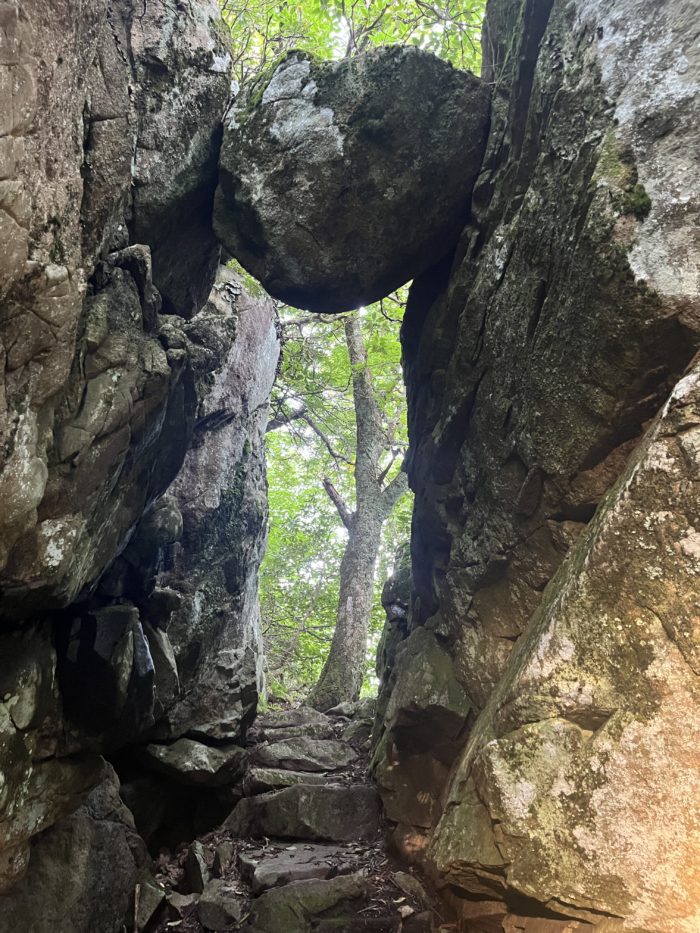 I was feeling positively giddy at this point, headed to a zero day at the hiker-acclaimed Middle Creek Campground, which offered great cheeseburgers and milkshakes, a resupply, beer, showers and laundry!

My visions of splendor would be squashed by a single yellow sticky note.  After dropping my pack and grabbing money I was still dreaming of a cheeseburger as I read the words “Campground closed until Friday” stuck to the store window.  Closed? CLOSED??  How could that be – there were at least twenty trailers in sites across the road (though only a few had cars next to them).

This meant no cheeseburgers, no beer, and – oh God – no resupply!  I had all of one oatmeal packet and a third of a bag of Fritos in my pack.  I was 30 miles – a day and a half hike – from a resupply town!  What was I going to do?

For the first few hours it was frightening not knowing where my next meal would come from.  I really feel blessed that I can’t even remember the last time I personally felt that way.  Ultimately I pieced it together with the help of generous campers nearby:

By day’s end I was feeling OK again – the store, according to the campground owner- would be open at 8am Friday.  (By the way he noted that this closure was the first time in 17 years that they’d closed during the summer.  Timing is everything!)  But then –

Exit to the beautiful ridge (again)

I’d eat PopTarts for my next four meals – but I really didn’t care.  I had enough food to get to Daleville and resupply.  And the ridge would again be beautiful beyond words: 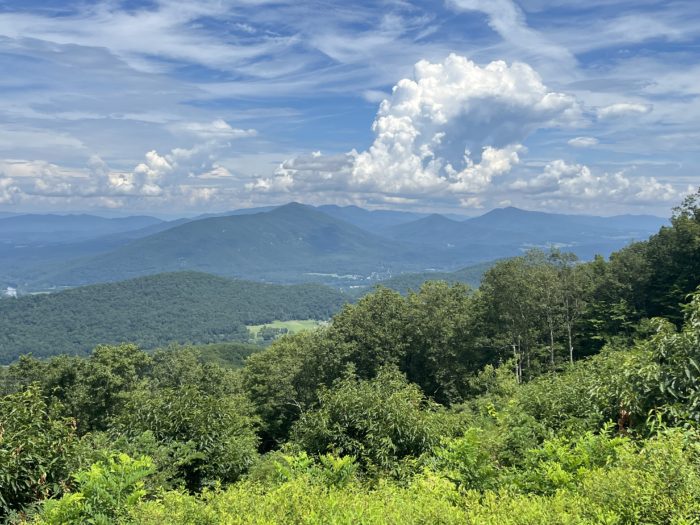 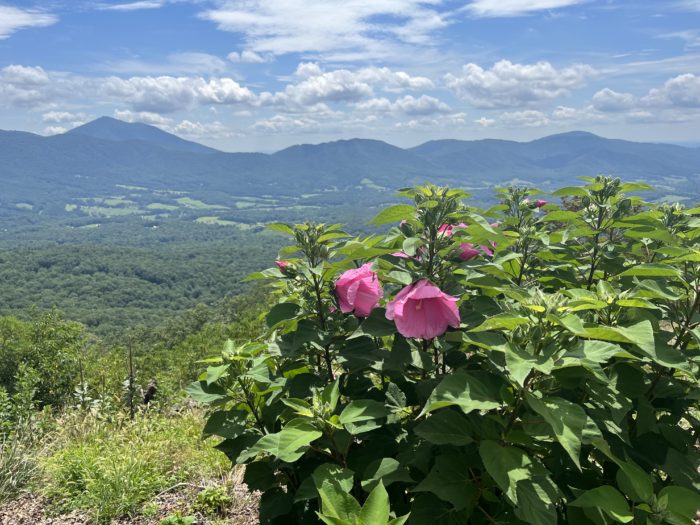 And although I could see the thunderstorms pouring down across the valley, I felt confident that I’d get to my shelter ahead of the rain: 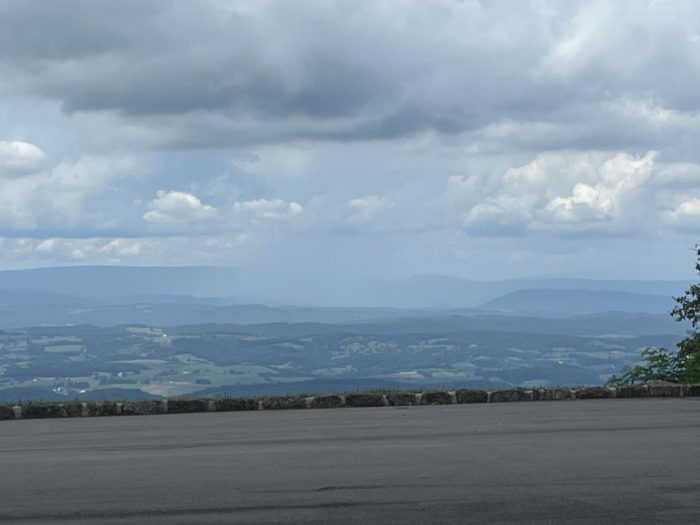 I would, by less than an hour.  PopTart in hand, I’d watch the heavy rain set in.

Just another four days in my AT adventure.