Wow – I just love this photo of me on top of McAfee Knob, one of the most photographed locations on the AT!  That spot was definitely the highlight of the Virginia Triple Crown section of the trail.  Here are the daily details:

Thunder forces a nearo in Daleville

I concluded my last post by describing my disappointing exit from Middle Creek Campground, where I failed to get any “town food” at all during my entire two day stay.  Daleville offered a few eating establishments that could remedy this.  And the sound of thunder helped push a decision to stay in town:

As I wound my way down the trail into town I was greeted by a surprise sign of progress! 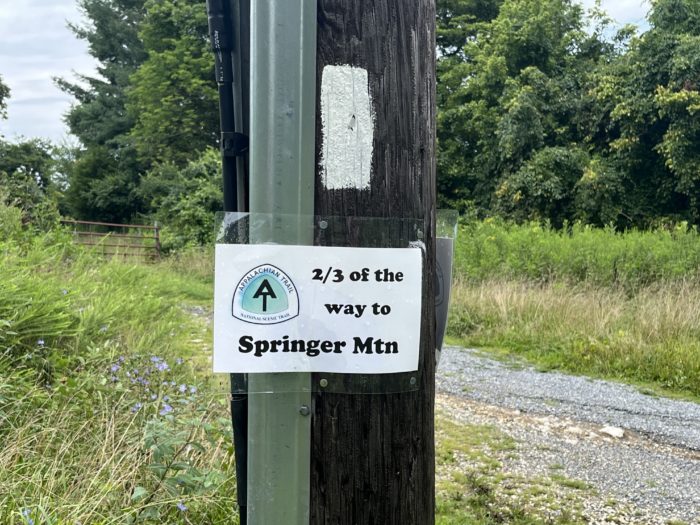 I hadn’t realized I was at the 2/3 completion point, and it felt great!

After checking into the Super 8 and dumping my pack in my room, I made a beeline to Three Little Pigs BBQ, a local joint with great reviews.  I started with two $5 appetizers – buffalo rinds and fried pickles.  You can see how huge they were … And they were tasty! 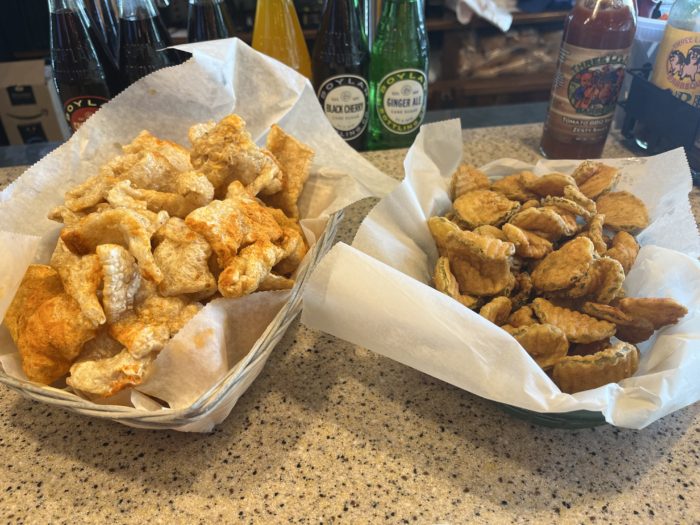 My pulled pork entree was also very good, and my favorite IPA of the craft beer selection was Pernicious from North Carolina’s Wicked Weed Brewing: 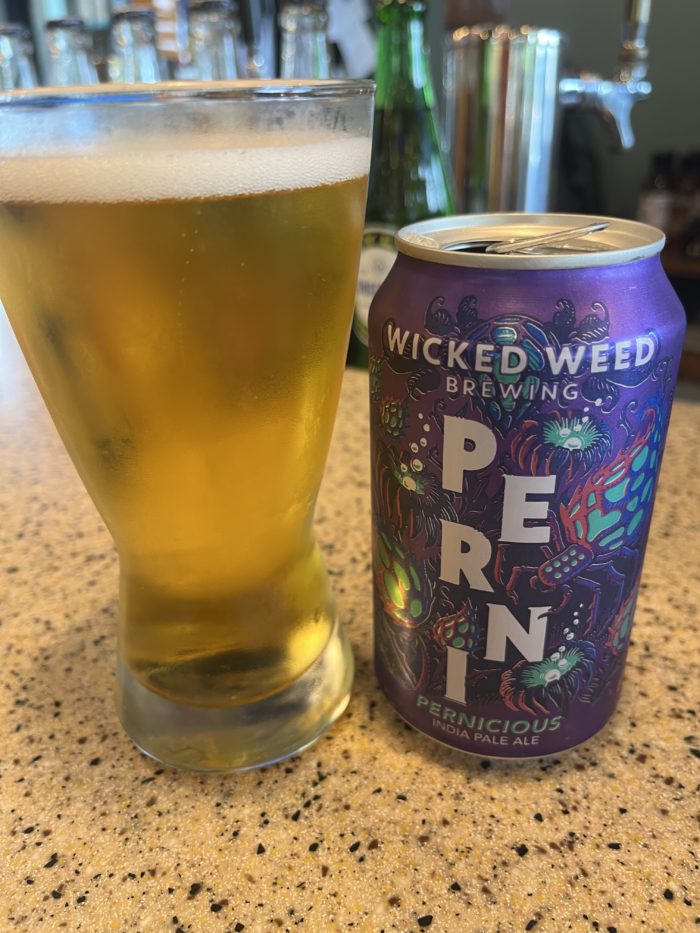 And after a stop at the Outdoors Store for fuel and a resupply at Kroger, I made it back to the hotel barely ahead of the storm.  Phew! 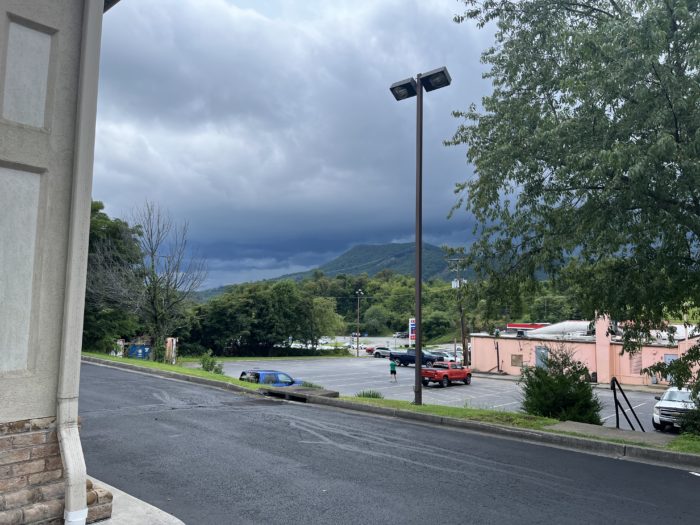 Virginia’s “Triple Crown”’consists of three unique mountain attractions located within a twenty-five mile stretch of the AT:

These are very popular day hikes as well, and I ran into many casual hikers as I passed through this area.

The hike out of Daleville on Day 109 would be rocky and ledge-filled even before Tinker Cliffs, but I’d see no views at all.  Thick fog obscured everything for the first six miles: 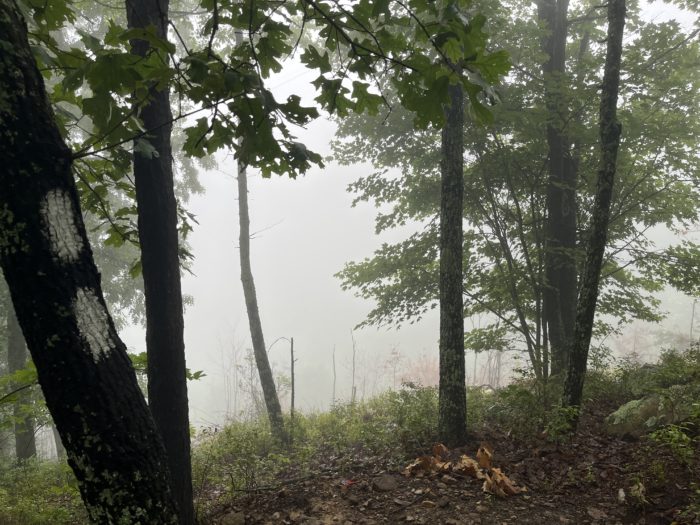 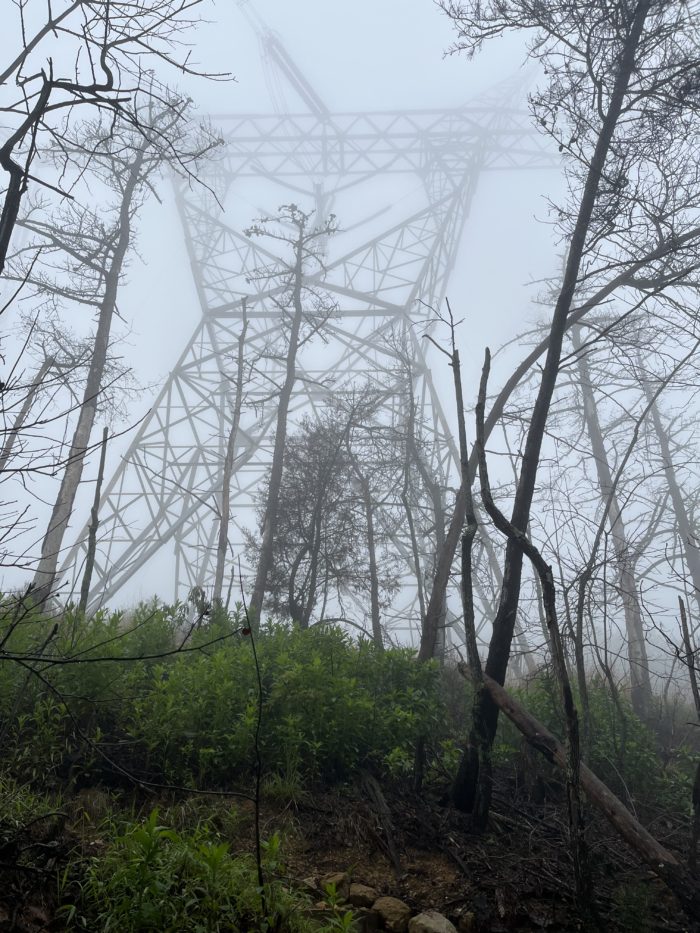 But the weather cleared before Tinker Cliffs.  I found the geology of the cliffs themselves to be as interesting as the views.  These cliff-bottoms resemble Mayan temple structures: 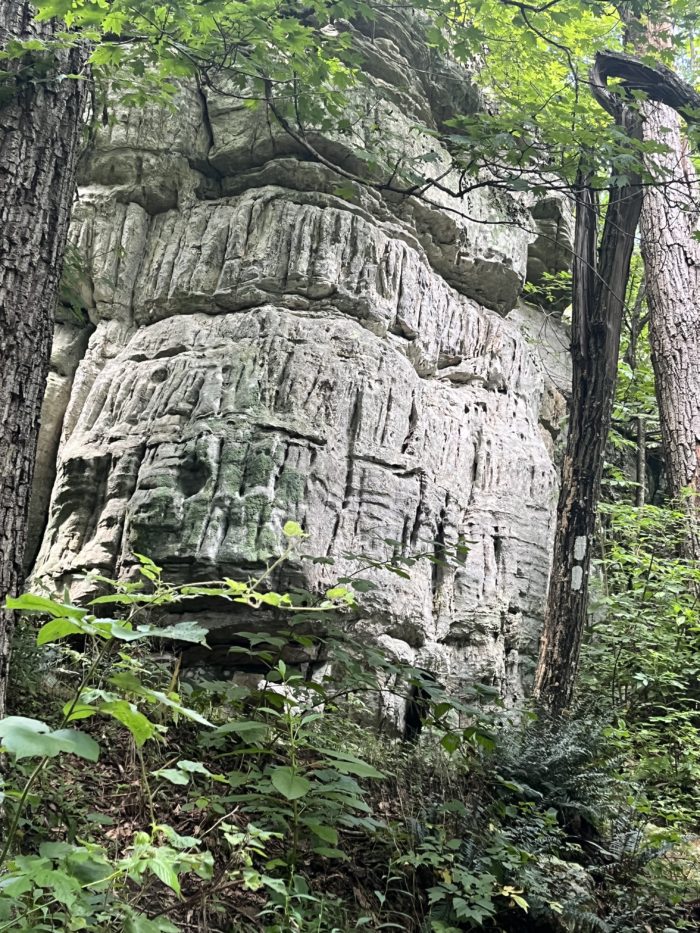 And the cliff views were so nice that a set of turkey vultures weren’t going to budge to give up the best seats on the ledge: 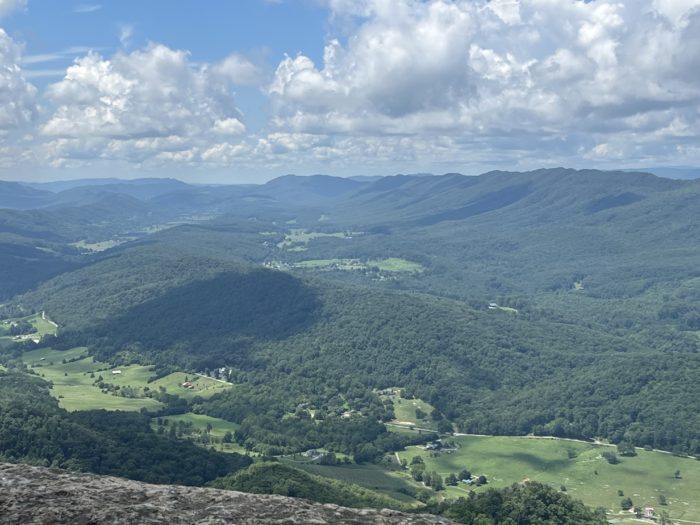 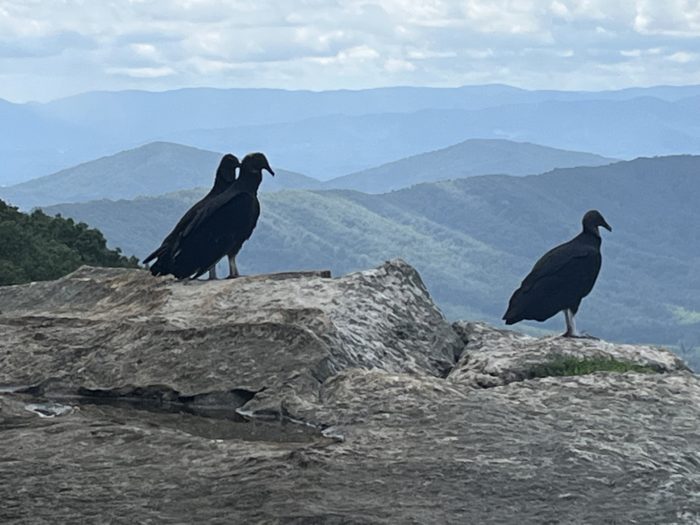 A long ridge and some down and up hiking brought me to McAfee Knob a few hours later. I mentioned earlier about day hikers being plentiful here — I owe some gratitude to the young day hiker who enthusiastically grabbed my iPhone and snapped away as I posed on the ledge.  I also really like this zoomed in shot that he took: 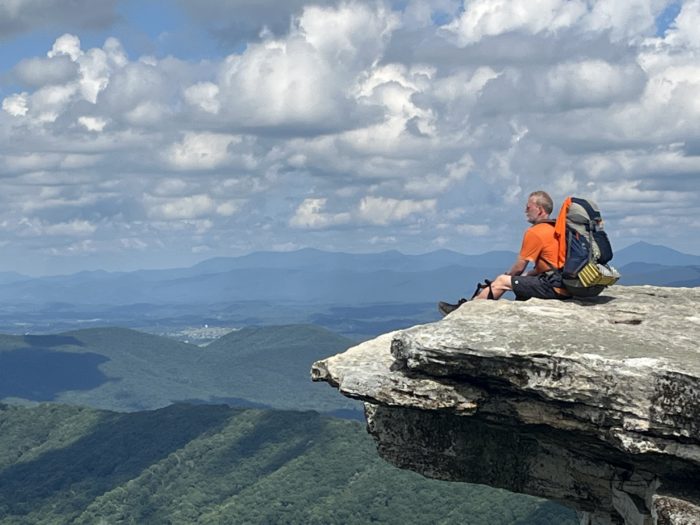 Just a quick note about the ledge where I’m posing: it looks super-scary, but it really isn’t.  The ledge extends far to the right (out of the picture), so it’s very broad and flat. There’s also another part of the ledge to the left where the photographer stands.  A little cut-out section between them is what gives that “hanging in the air” effect.  It’s a bit of optical illusion – but makes for great photos!

Dragon’s Tooth – but first, a pizza!

On the morning of Day 110 (after yet another set of nighttime thunderstorms) I awoke to the pleasing sounds of two owls calling back and forth to each other.  It was a touch of the Northeast, and it was very welcome!

My initial hiking goal that morning was to cover the 8 miles down to Catawba Grocery, a convenience store known for good pizza.  One 12-inch bacon pizza later I headed back up the ridge to climb Dragon’s Tooth, named for the interesting rock formations on its ridge.

As it would turn out, the climb itself up the peak would become my MMM that day.  The hand and foot scramble near the top was the most challenging terrain I’d seen since Katahdin, and it was fun to win the battle.  On top the rocks were interesting, but IMO less intriguing than the climb. 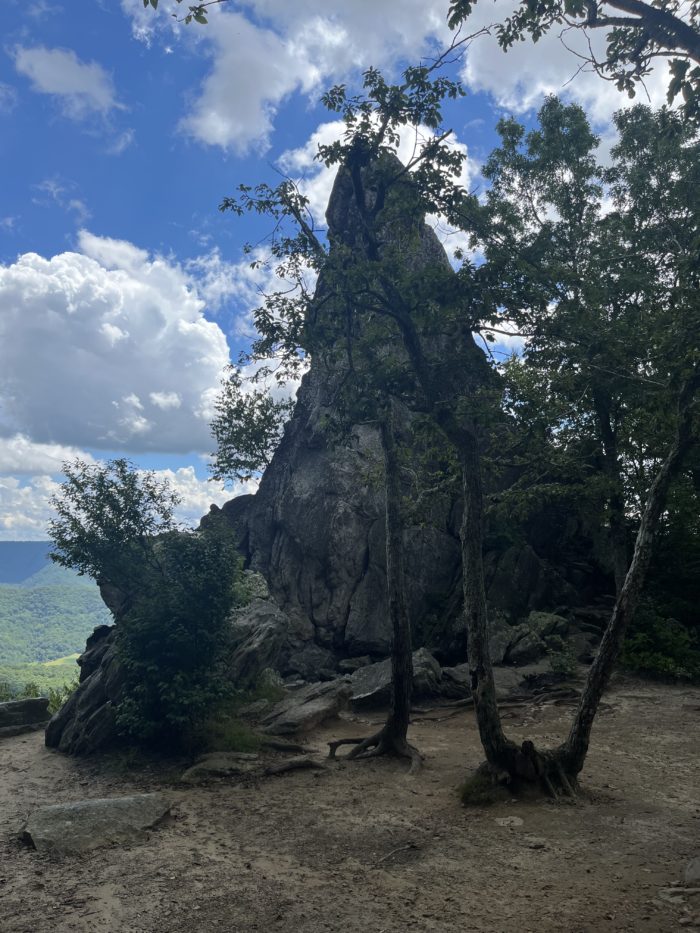 That night I’d bypass staying at a low-lying shelter which appeared wet and buggy.  Instead I’d press on for five more miles and camp at 2700 feet in a stealth spot.  I find the air to be much better for sleeping on the ridge. Just another way I’m finding my trail name “High Road” to be very fitting.

Mental games I use while hiking

A number of you have asked me “How do you stay motivated and engaged on the AT hiking for 8 to 10 hours a day every day?”

There are a couple of tricks I use to maintain my focus each day:

One is to always have a “next milestone” point that I’m working towards.  It could be a stream where I’ll get water, or a peak, or a road crossing.  Find how far away it is and estimate the time to get there.  This gives me a short “deadline” that I reach quickly.  And it’s a great motivator to crush your estimate! Repeat this over and over.  I usually target something 2 to 5 miles away.

Another thing I do for long ascents is to celebrate little victories on the way up.  Usually the most arduous part of any ascent is the work you need to do to reach the ridge line.  Commonly this is a steep ascent from a road or river.  I call this hard part “gaining the ridge” or “GTR”.  Here’s some of the silliness I add in here:

And there are endless variations:

You get the point.  And by the way, I don’t consider the success of this strategy to be limited to thru-hiking.  I believe you can tackle big projects, business challenges and personal goals using the same basic approach: minimize and celebrate!

The early morning retained the breezy coolness of the prior night, giving an enjoyable hike up to a memorial site. 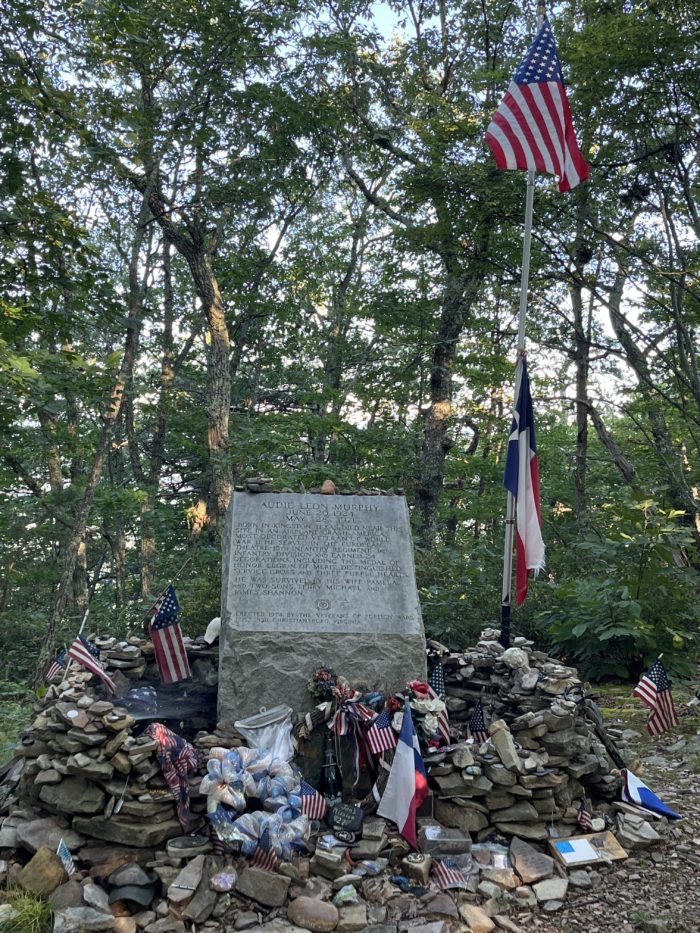 The memorial honors Audie Murphy, who died in a nearby plane crash in 1971.  His name was not familiar to me, but in addition to his military accomplishments (below), he became a well-known actor later in life. 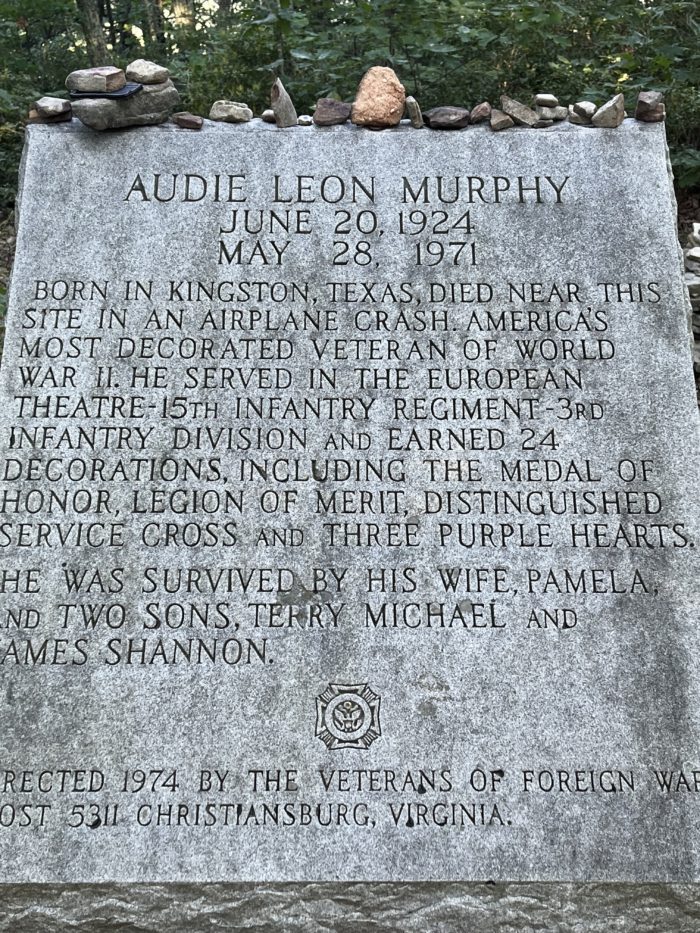 A couple of other sights on Day 111 included passing an Eastern Continental Divide point, 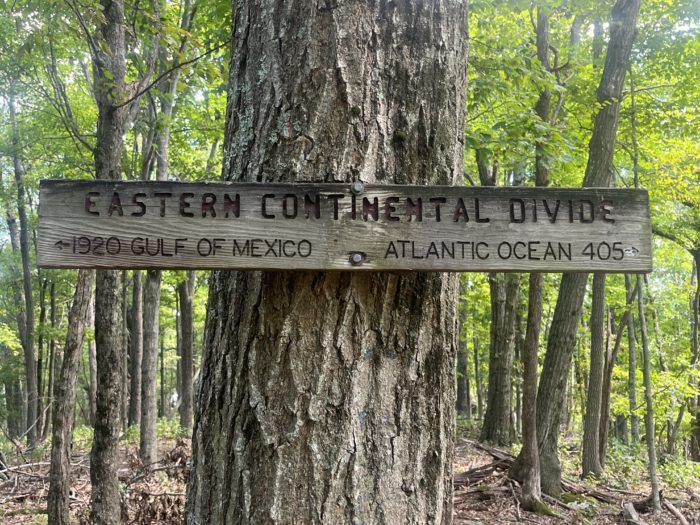 as well as the Keffer Oak, a 300 year old tree believed to be the oldest on the AT. 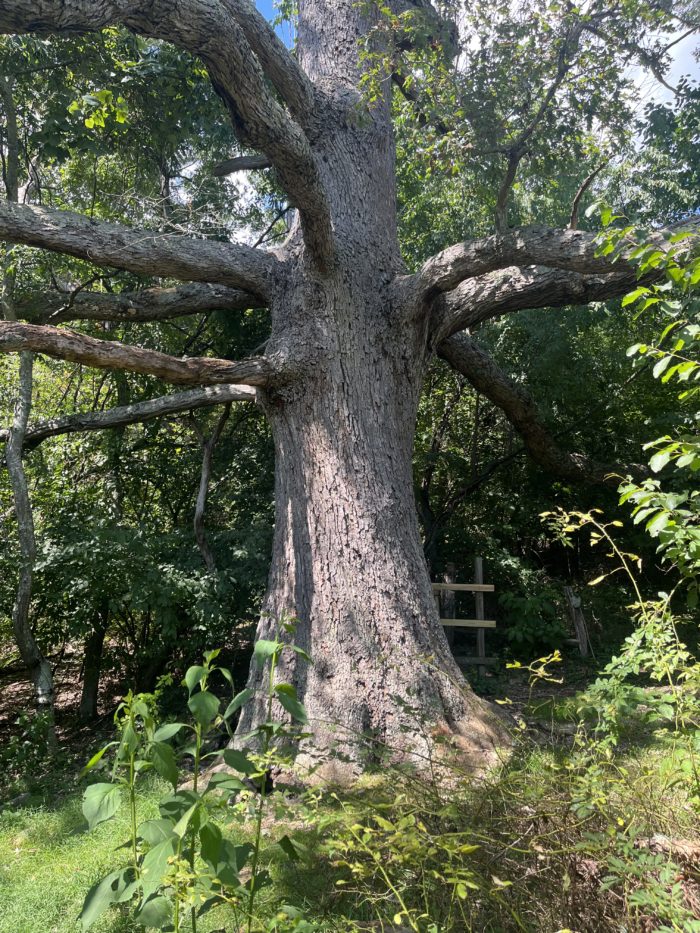 Ah, but none of those would prove to be the MMM (Most Memorable Moment) of Day 111.

While lying in my hammock at Laurel Creek Shelter, darkness crept in as I blogged on my phone.  I looked up to see a strange light in the woods to my right.  It looked like it was coming from the privy.  Could someone have installed a solar light on this one? Maybe – I’d seen all kinds of interesting twists in privy design.

But as time passed the light grew stronger and rounder and brightly shone in my face!  Yes, it was the moon and it was SO low and full!  And it slowly rose into the sky and lit up the night to an incredibly bright level.  It was the MMM of the day.

I’ll leave you all with this image of the wide Virginia sky over an AT pasture. 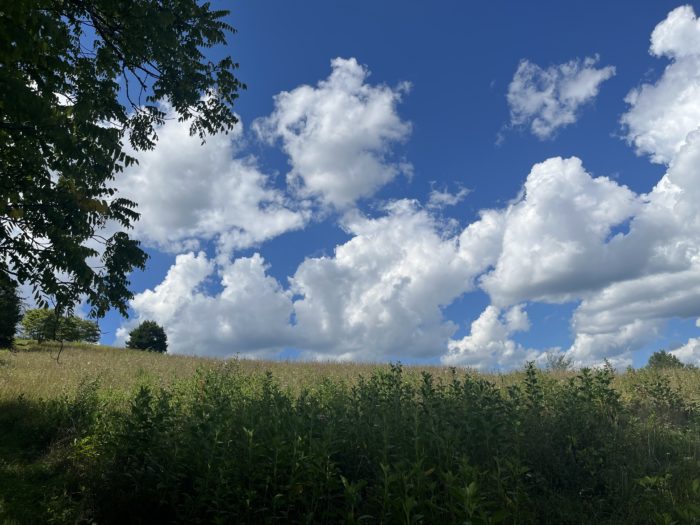