A 70 degree and sunny day greeted me for my first full day of hiking in the White Mountains. I was back at Kinsman Notch and hiking by 8:00, headed towards North and South Kinsman Mountains. The climb back up into the woods was steep and rocky, but soon leveled out.

Although the next seven miles didn’t consist of any big climbs, the trail was still filled with very technical and rocky short ups and downs. The tough terrain slowed me down to a 1.5 MPH pace, much slower than I was used to. I had to accept that slow going through rugged trail conditions would be my new reality.

I arrived at the Eliza Brook Shelter at the base of the Kinsmans feeling much more drained than I usually would after 8 miles of hiking. I drank tons of water and ate some more snacks at the shelter which helped tremendously. Feeling recharged, I began the 2,000 foot ascent up towards South Kinsman peak with Swamp, who I had ran into at the Eliza Brook Shelter. I haven’t seen Swamp since Pennsylvania so it was cool catching up.

The beginning of the climb was rocky but rather gradual, following right alongside a large waterfall. We soon arrived to a bog boardwalk where the massive peak of South Kinsman Mountain came into clear view. From there, rock climbing took place of traditional hiking. I put my poles away as I had to pull myself up and over large boulders for the next several hundred feet of elevation gain. This climb was no joke; although tiring, I was thoroughly enjoying the rock climbing. We were greeted to phenomenal 360 degree views of the surrounding peaks all around us.

The trail descends briefly before a short climb up North Kinsman peak, before a very long and technical 5 mile descent back down into the valley. This never ending descent totally wore me out;  I was feeling pretty exhausted along with very sore quad muscles from the constant pounding on the rocky descent.

The descent leads down to Franconia Notch, where the trail then continues with a long and steep three mile climb up to Franconia Ridge. All day, I had the intention of doing that climb and camping up there, but I was way too exhausted and in no mood to do that climb by the time I arrived at Franconia Notch.

15 miles definitely had me more exhausted than expected, so I opted to spend another night at The Notch hostel instead of killing myself with the tough three mile climb at the end of the day. There were no camping options nearby, so it was either do the climb now or spend the night at the hostel and save it for tomorrow. Jackrabbit caught up with me right before the notch and we both got picked up by a shuttle driver, exhausted but very happy with how the day turned out. 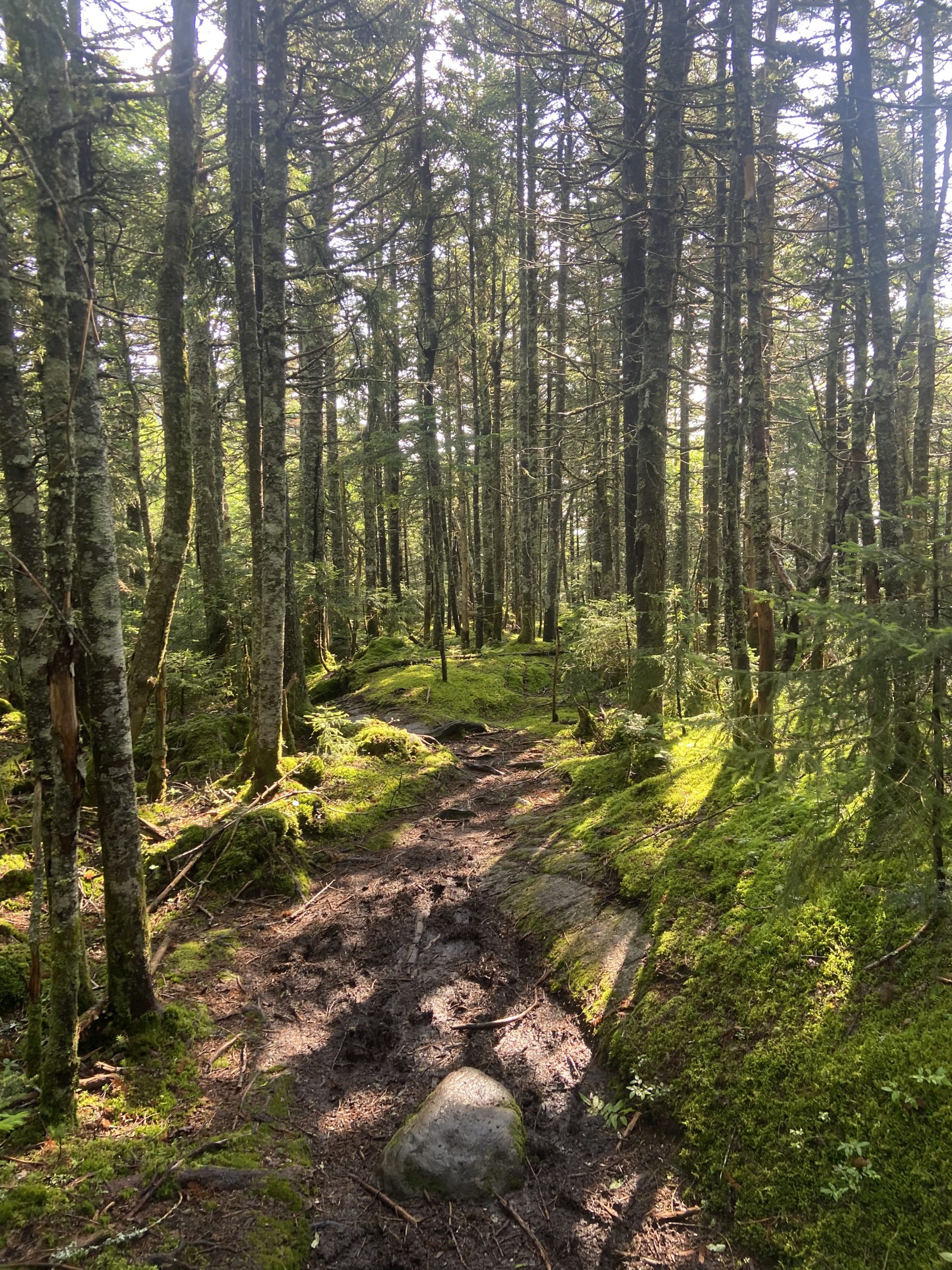 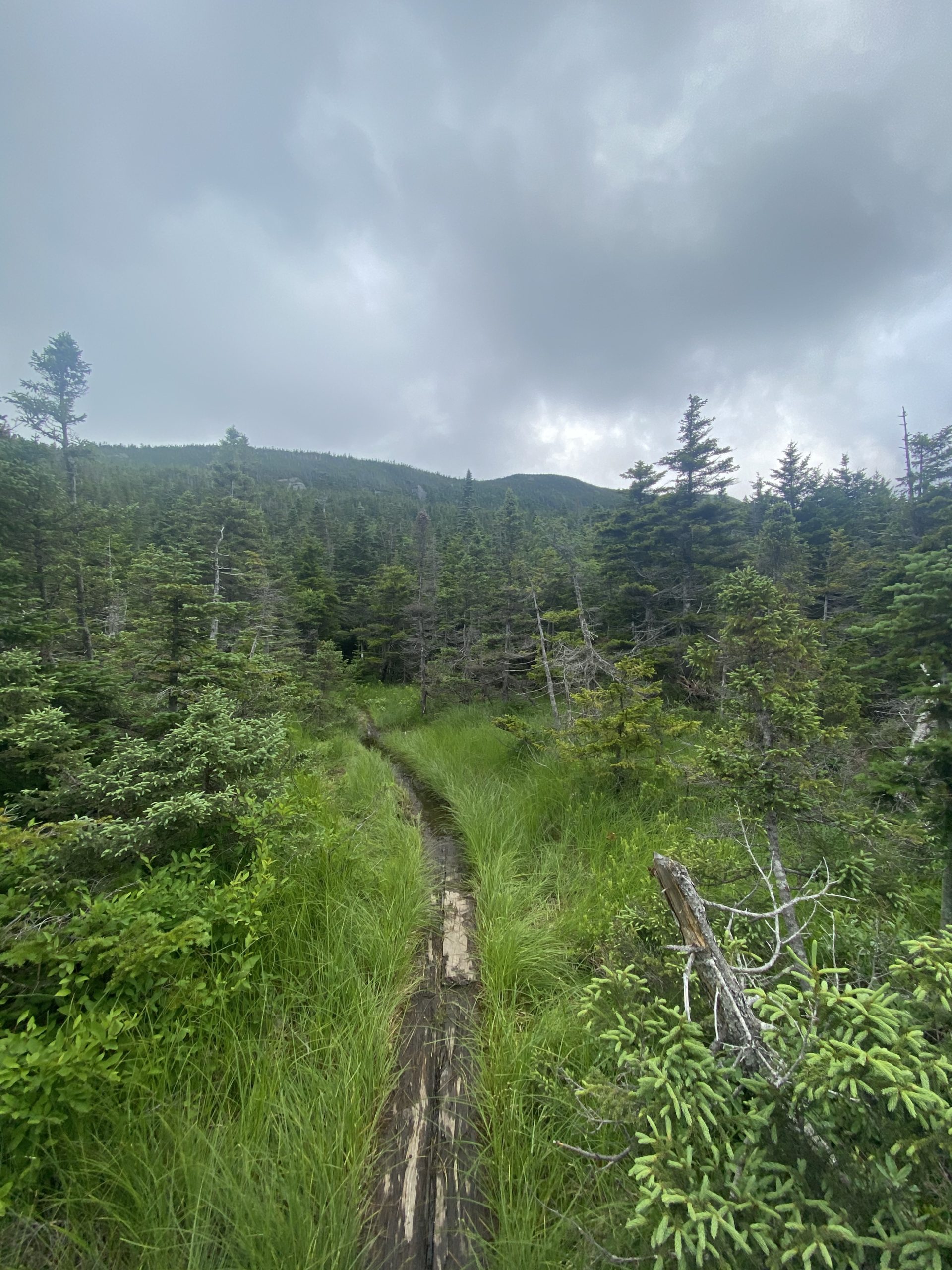 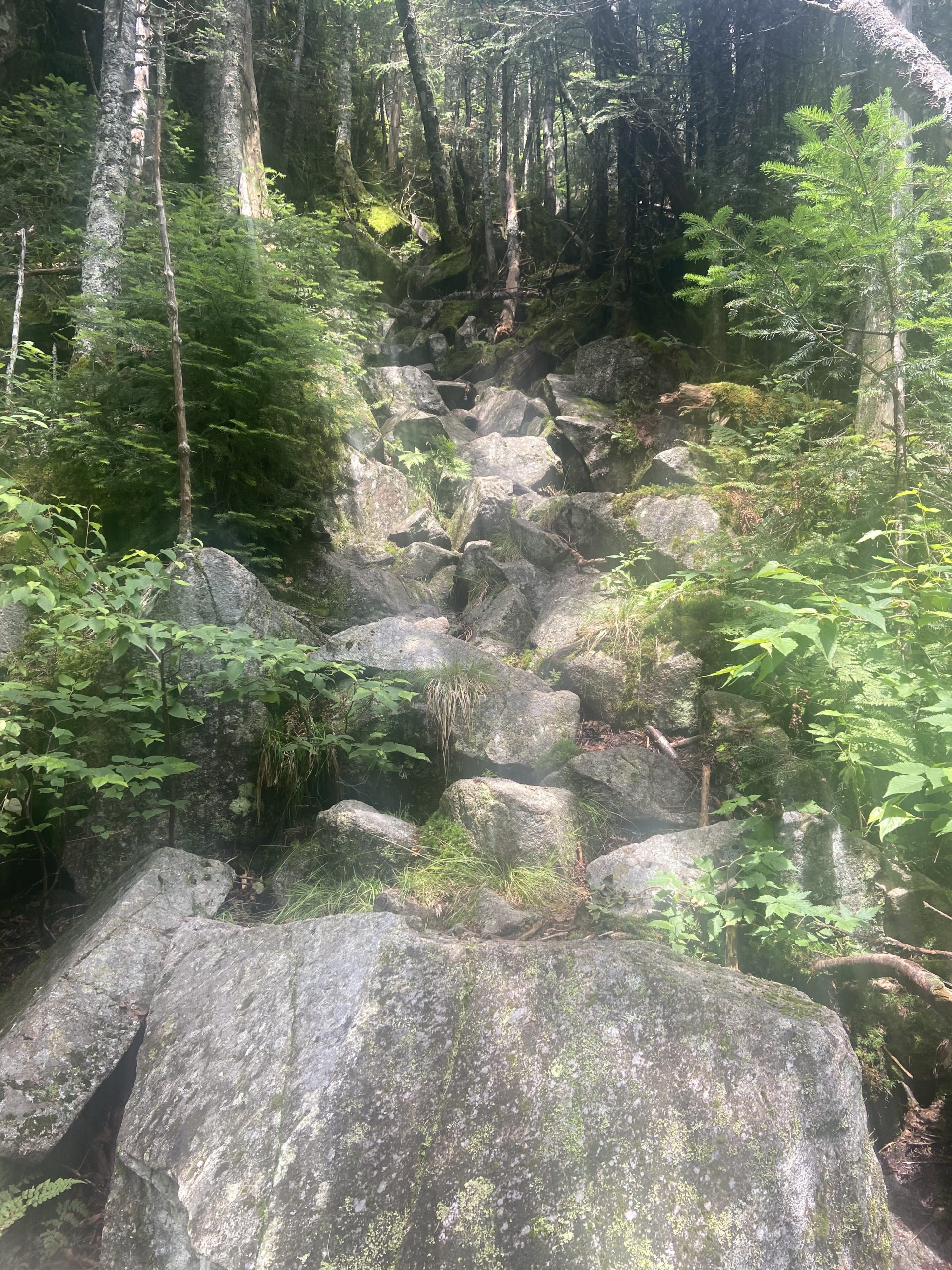 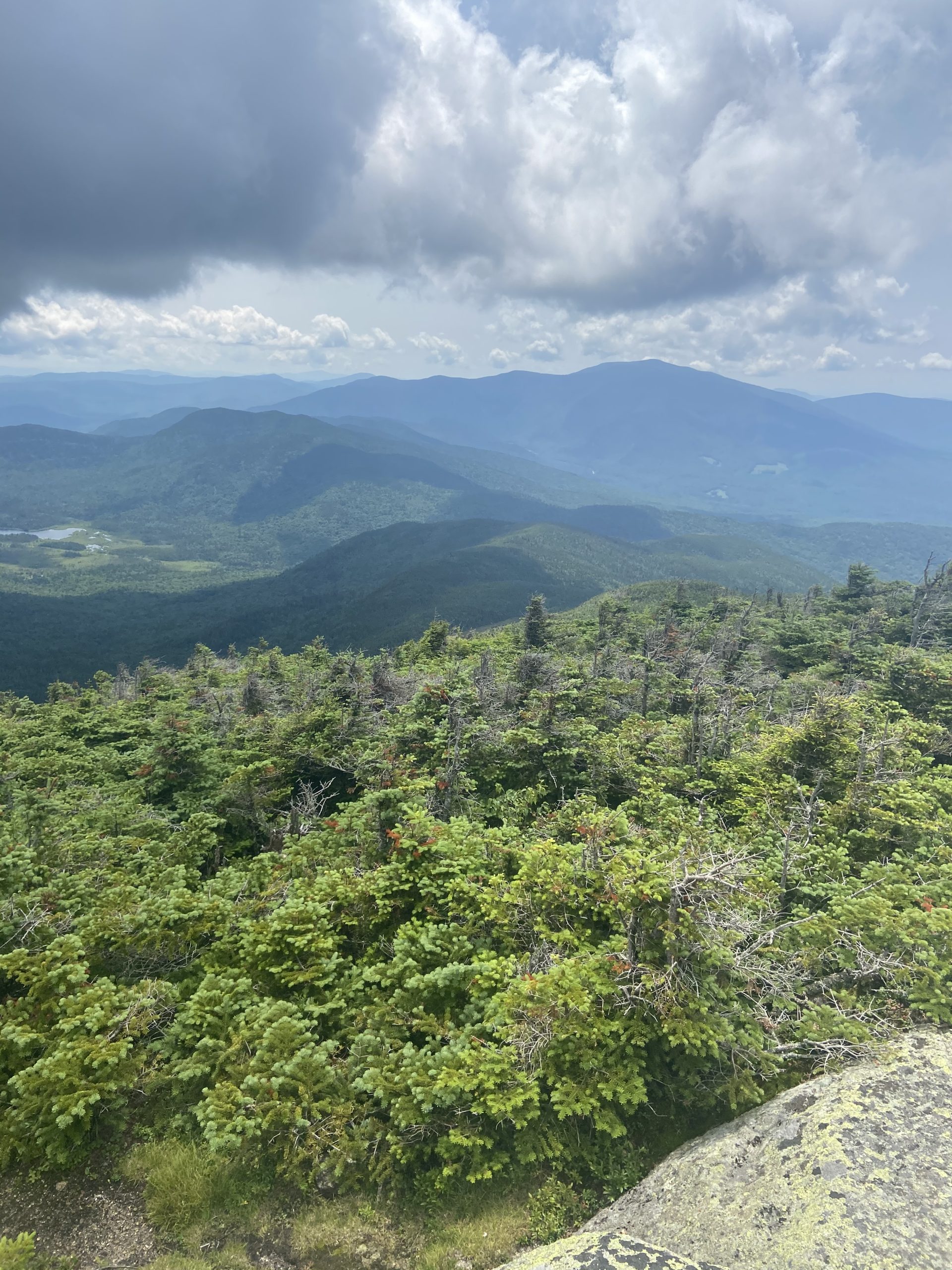 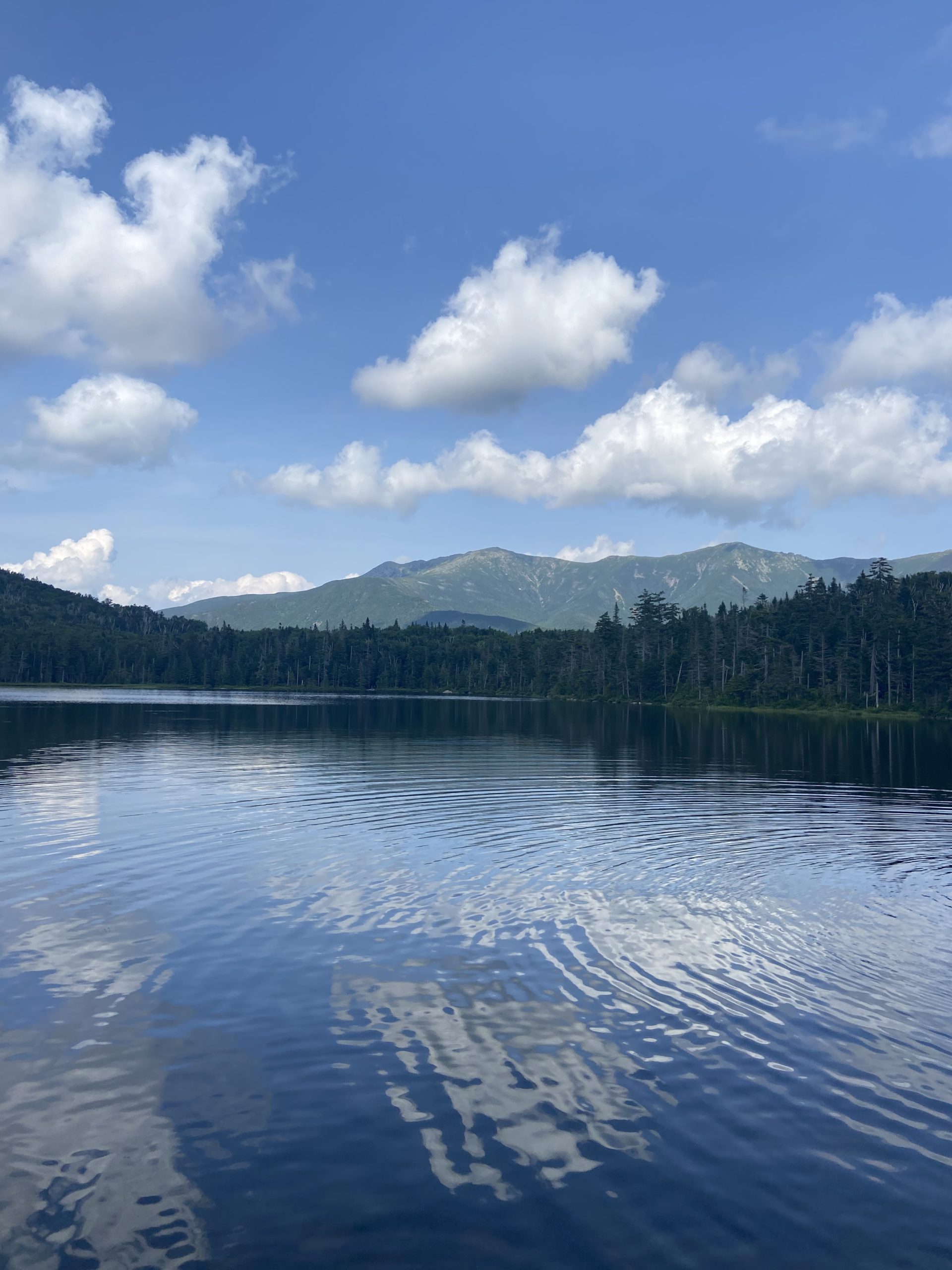 I was definitely feeling well rested after a rare back-to-back hostel nights, and Jackrabbit and I were back on trail by 8:00. We were instantly greeted with the 2,800 foot climb right off the bat, taking us up to the iconic Franconia Ridge; a roughly 4 mile stretch of trail entirely above tree line. It was a pretty tough climb and I was glad with my decision to put it off until I had fresh legs and full energy.

We soon found ourselves above tree line at 4,700 feet, ascending to the top of Little Haystack Mountain. At first we were in the socked in by the clouds, but the clouds soon cleared up, offering fantastic 360 degree views. This process of cloudy and clear conditions would continue throughout the entire exposed ridge hike. The hiking on Franconia Ridge wasn’t easy at all, as I was constantly rock hopping and maneuvering past boulders. The trail reaches the summits of Mt Lincoln and Mt Lafayette before descending back down into tree line. Franconia ridge is an absolutely stunning section of trail, and I was thrilled to have decent weather up there.

The work for the day was just beginning, however. A steep and technical descent then leads to a very tough 600 foot climb up Mt Garfield. This climb was similar in nature to the Kinsmans with the rock climbing, but sketchier at times. To make things more tough, it started to rain on the climb up, making the rocks slippery and flooding the trail. The rain thankfully soon stopped after another tough descent off Garfield.

Shortly after, Jackrabbit and I arrived to Galehead Hut. These AMC run huts offer (pricey) bunks for hikers, along with hot food and snacks for purchase. We downed some Candy and snacks before one final climb up South Twin Mountain, gaining almost 1,200 feet of elevation over a short span of .8 of a mile.

I was definitely pretty drained after this steep climb, but felt strong on the final few cruisy and scenic miles to Zeacliff Pond, the perfect lowkey spot for stealth camping after a long day. Jackrabbit was camping with me for the night, and we reflected on an intense but very rewarding day, before calling it an early night. 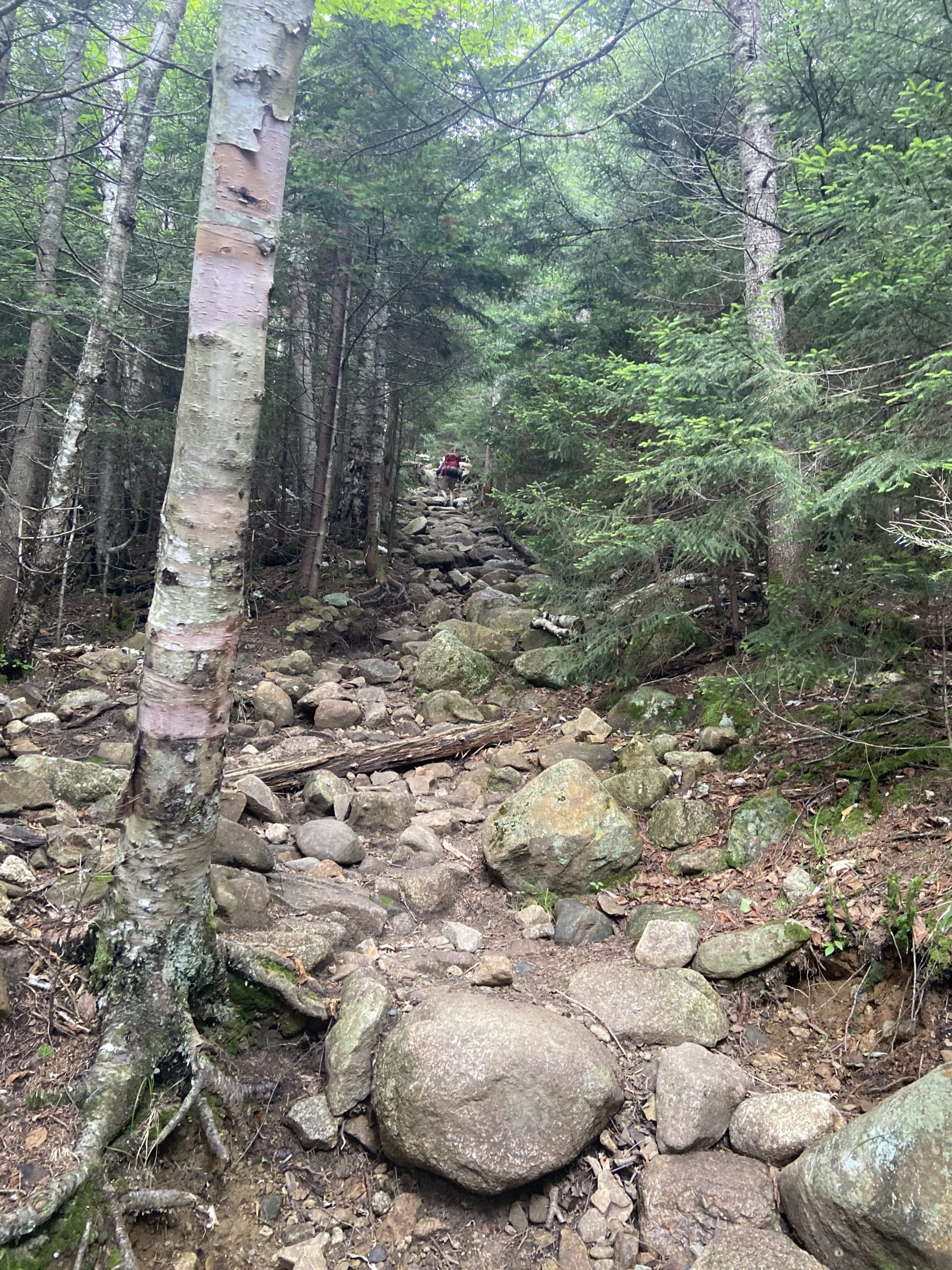 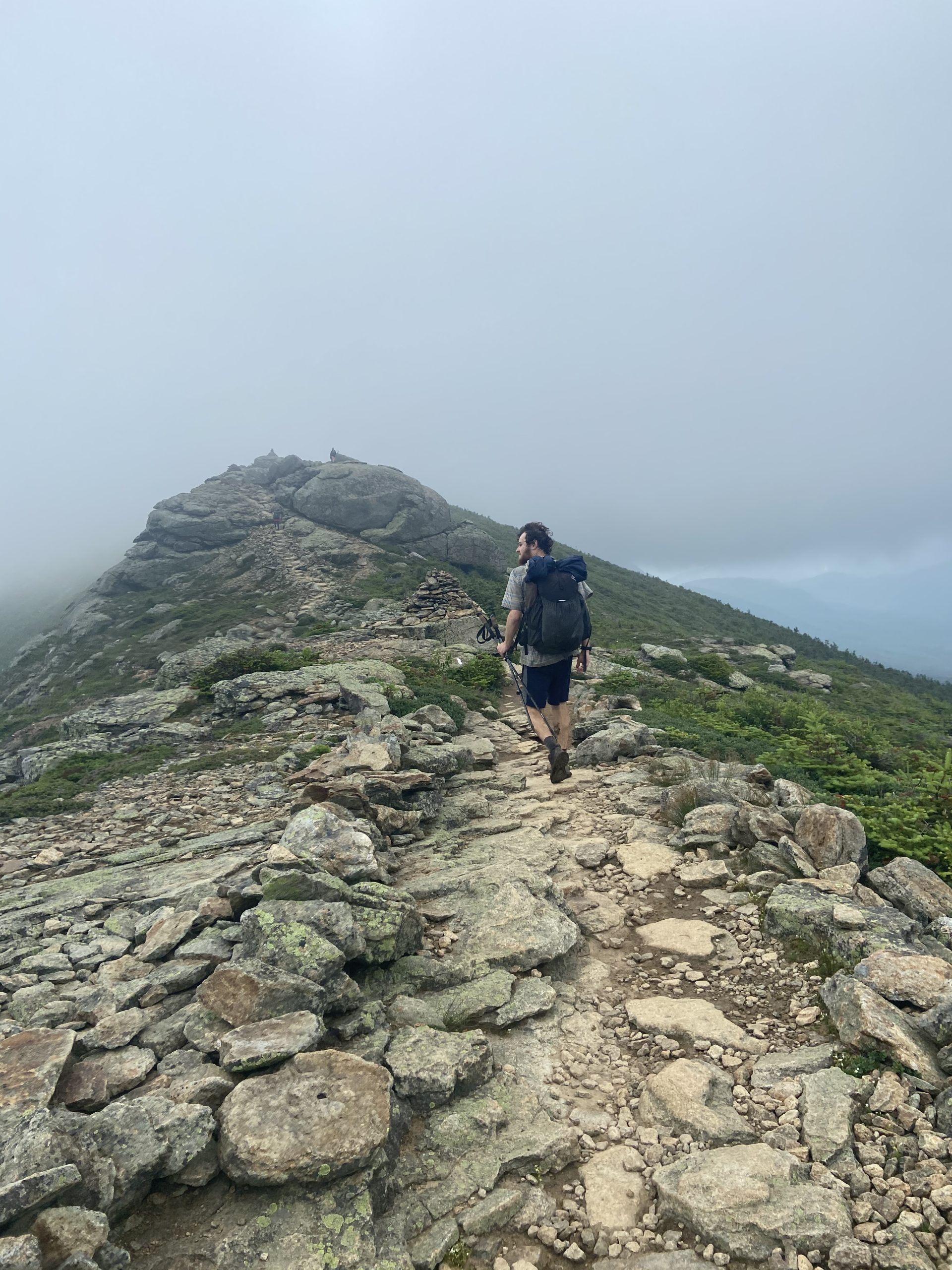 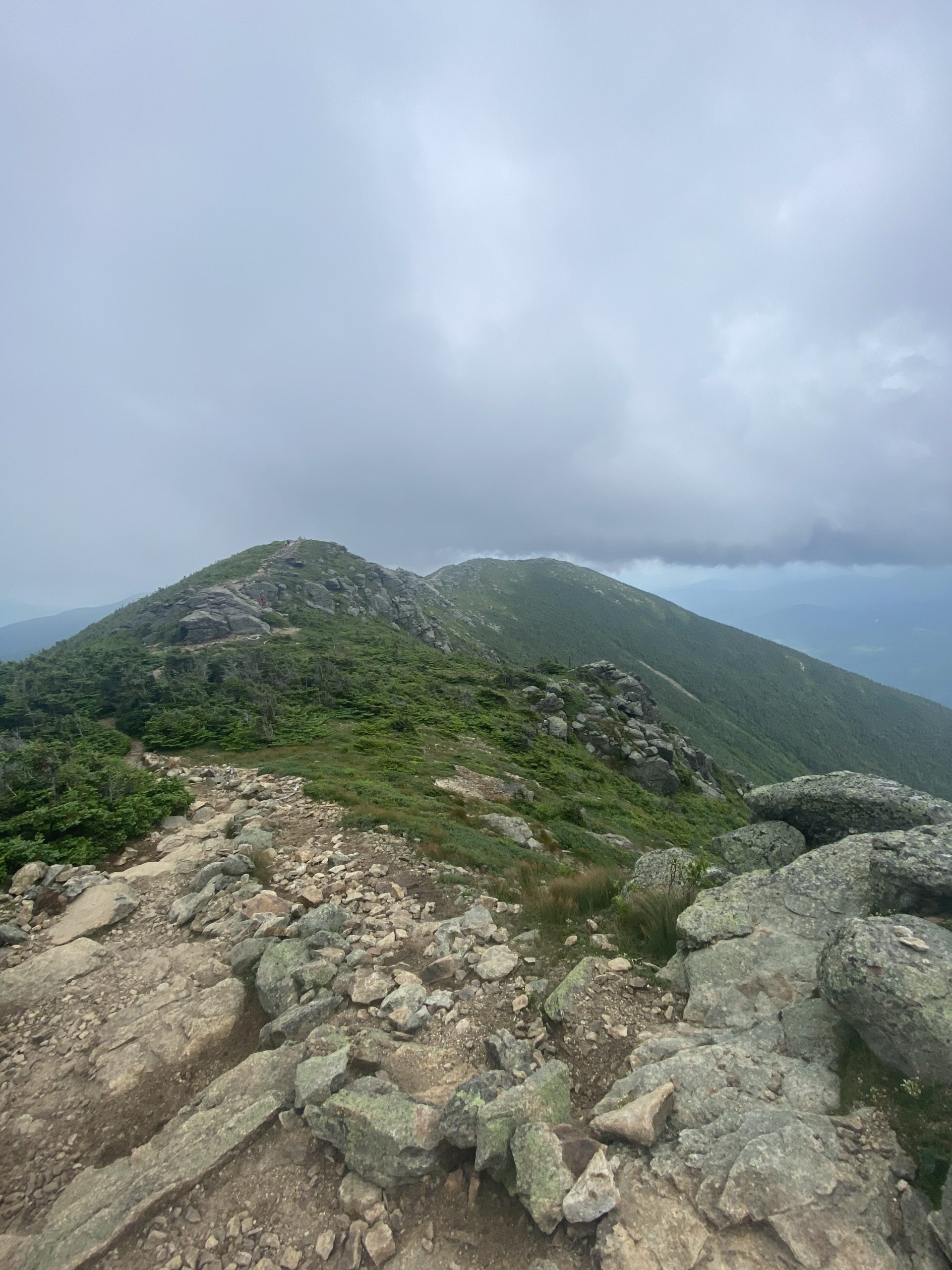 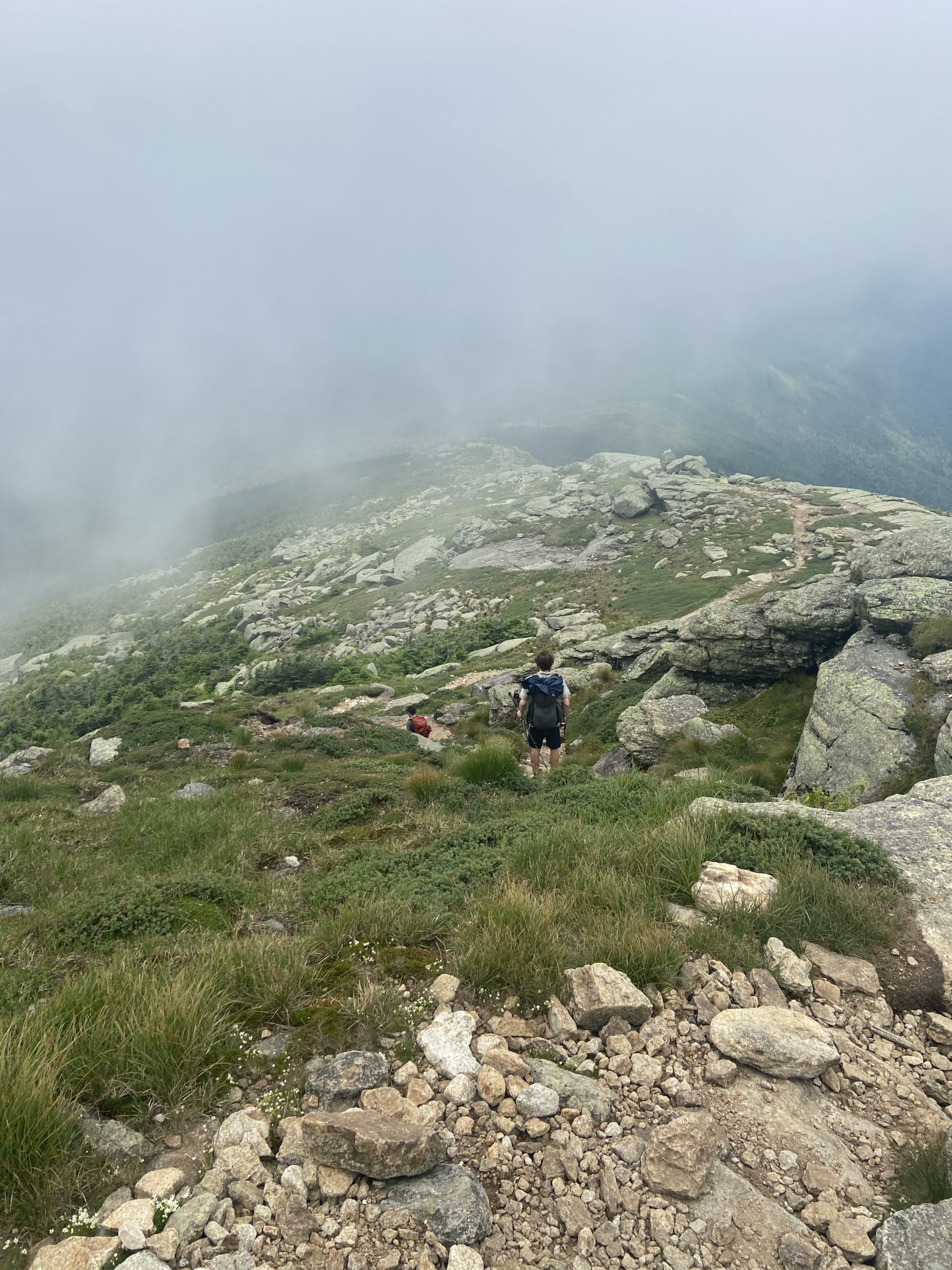 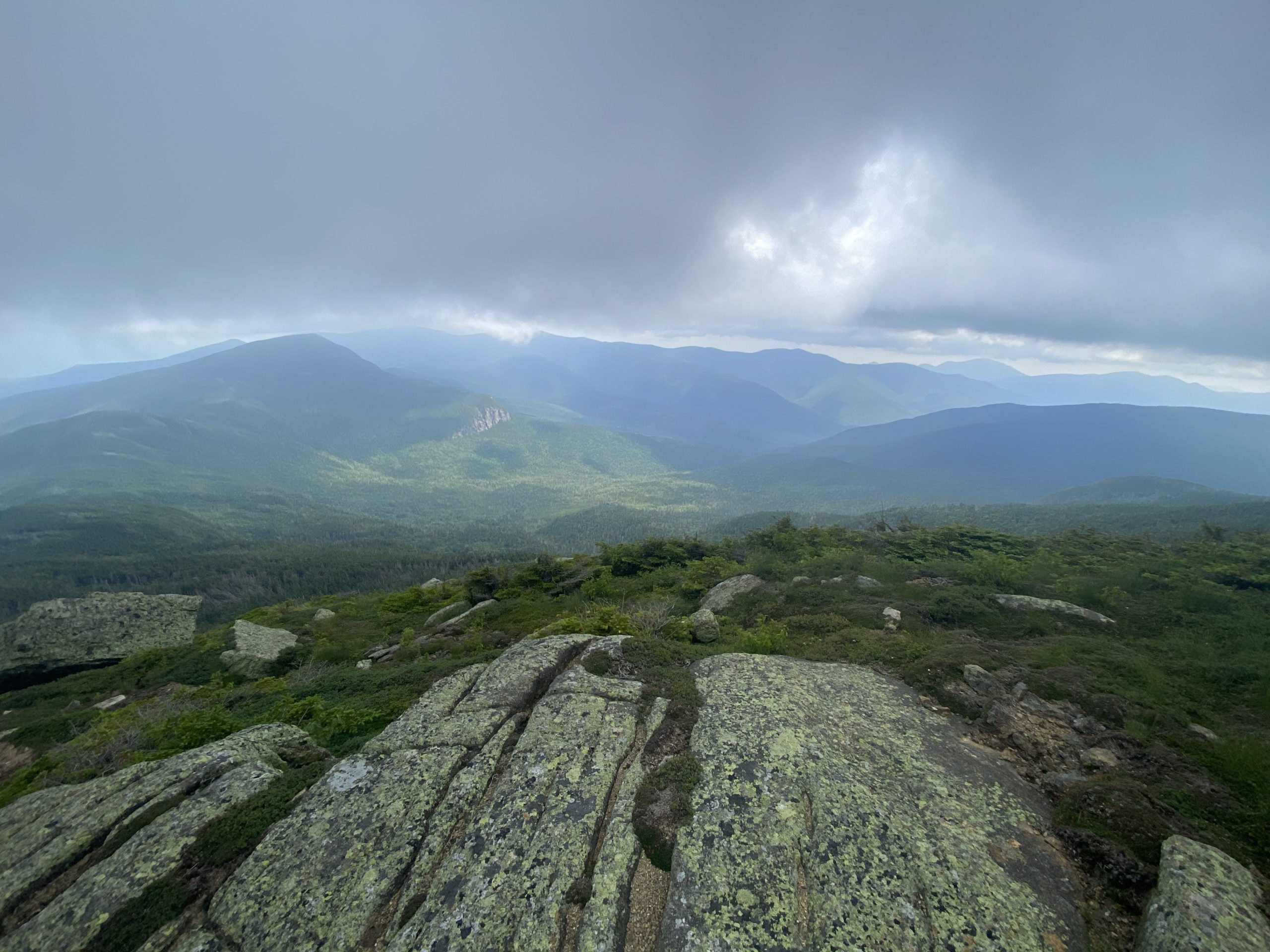 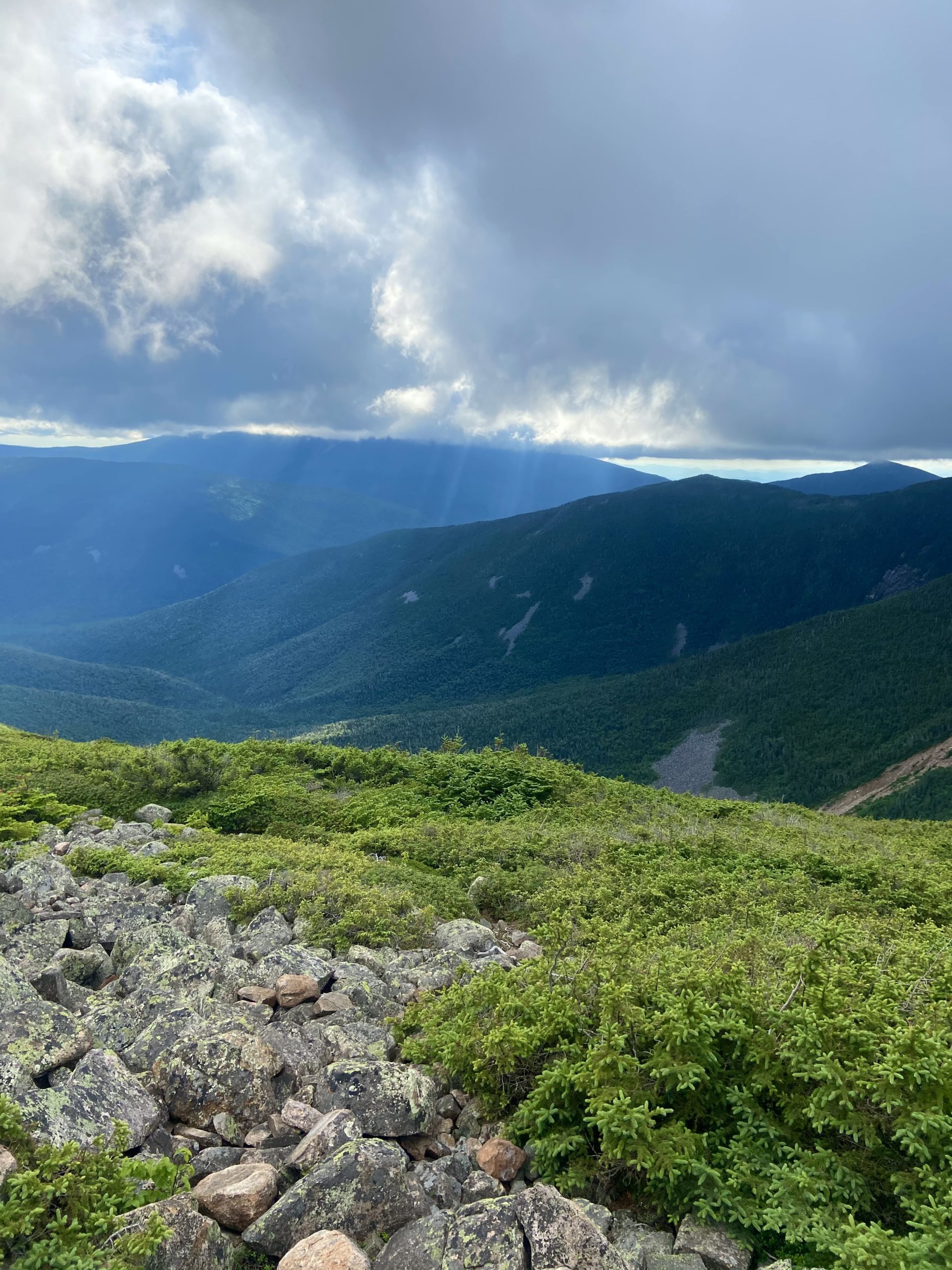