As I worked my way into southern Virginia, the AT took me through numerous stretches with long ridges and few peaks.  Here are the daily details:

All ridges are not the same

Unlike the irregular ridges of New Hampshire and Maine, the Virginia ridges around Pearisburg run flat for miles with no peaks or dips.  Although you might think that this would be easy hiking, it’s not always the case, because:

Here’s a photo of some of the ridge trail that I traversed on Day 112: 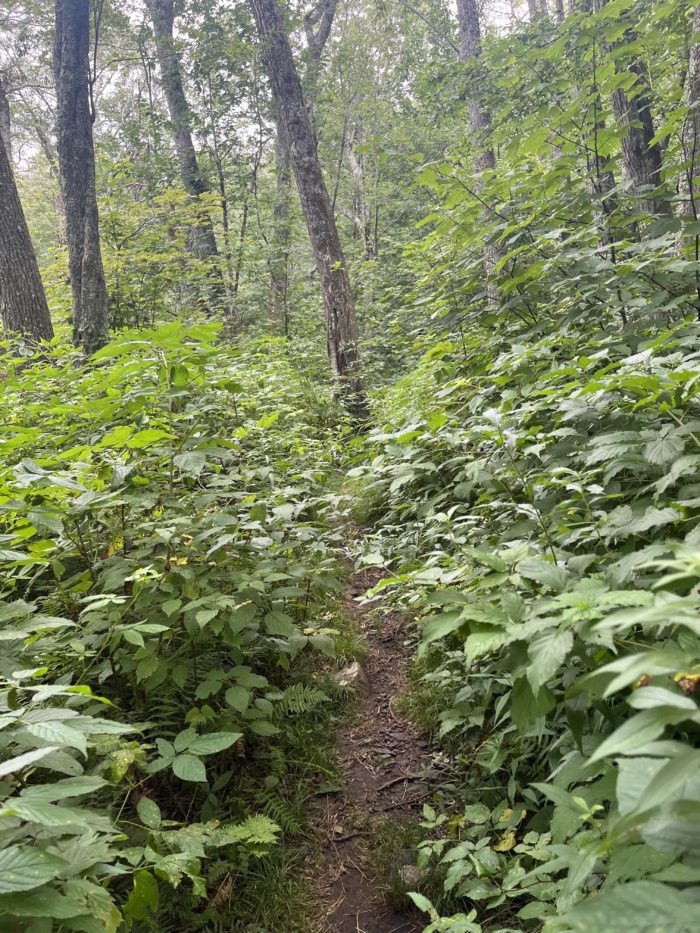 This section of the ridge was fairly manageable. To knock down some of the higher plants I kept my trekking poles out in front of me with elbows at 90 degrees like a beginner skier. And there were more than a few spiny bushes to deal with.  Unfortunately clouds covered all of the views on both sides of the ridge for the entire day.  Thunder rumbled constantly but it didn’t rain until 4 PM, just about an hour before I reached my shelter. So yeah, wet again in Virginia, what’s new?

Now when conditions are good for easy hiking on the ridge, I find that I can often crank out twenty minute miles!  My typical hiking pace is two miles per hour (30 minute miles), so this is a huge bump in speed.  But to do this, I’ve got to have a good rhythm going to get into flow.

If I’ve got the right music flowing through my head, it leads to a perfect rhythm.  I’ve previously mentioned that “I Was Made For Lovin’ You” by KISS is a great rhythm walking song.  On Day 113 I stumbled onto another great one – “Walking With A Ghost” by Tegan and Sara.  One look at the morning fog will tell you why that song popped up: 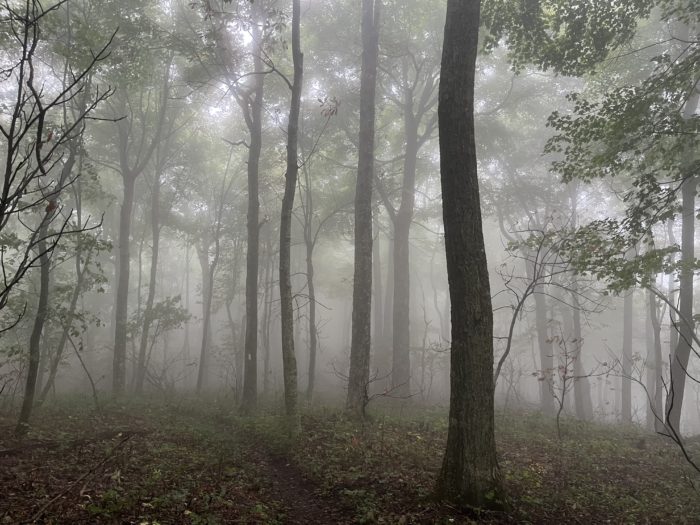 The ridge had a spooky, supernatural kind of aura that became dreamlike at times: 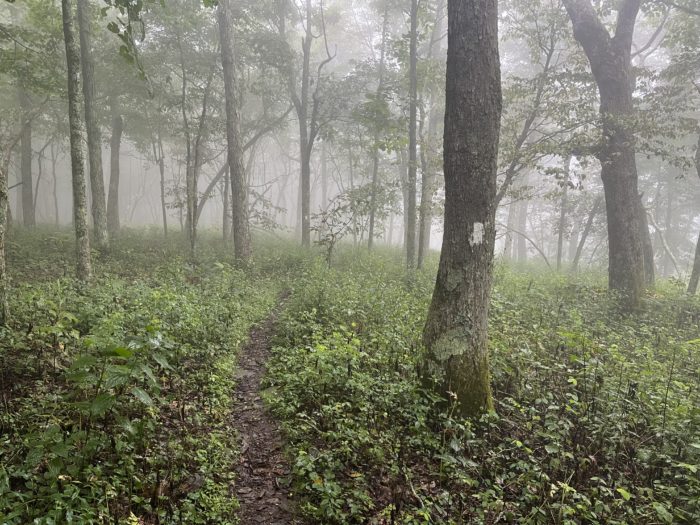 Each of the songs I mentioned has a beat that you can take eight steps to within each line of the song. That can get you flying down the trail! I was cranking early on my Day 113 ridge walk until … conditions changed.

Soaked down and cut up

The ever fickle and unstable Virginia weather struck the next blow on Day 113, as the skies opened up at 9:30 AM for two hours, soaking me to the bone.  My boots now squished with each step.

Meanwhile the trail vegetation had become thornier and thicker a few miles further in. Several sections were so overgrown I could barely see a gap indicating the path direction.

After several miles of trying to fend off spiny branches with my poles my knees had gotten pretty cut up with scratches and thorns.  As I stopped to check out a thorn poked in my leg, I felt something strike my left shoulder.  A piece of a birch tree about the size of a rolling pin had fallen off and hit me!  That was the Day 113 MMM (Most Memorable Moment), as I don’t recall a tree hitting me ever before!

Now the picture below may not look like nirvana, but it WAS on that day.  It’s a trail junction to a spring – the first water in 11 miles.  It also brought me close to the end of the full 12 miles of “cut-up ridge” as I now called it. 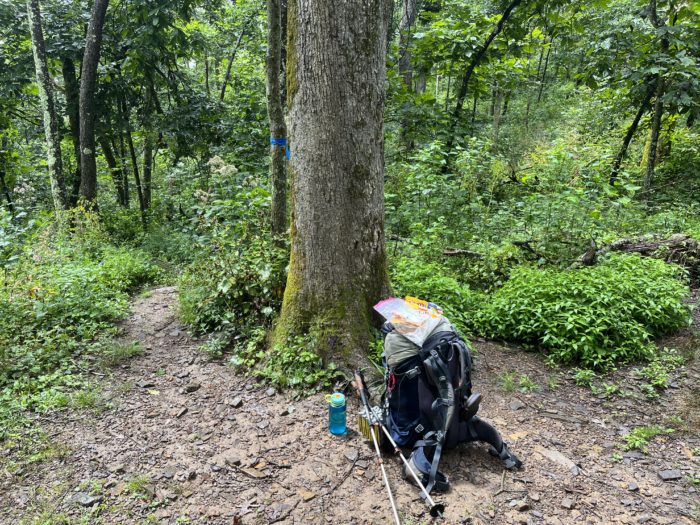 The town of Pearisburg (and a two day hostel stay) was now only eight downhill miles away!

Was “Yankee Luck” at work here in the South?

I met a late-starting NOBO named Firewatch at a shelter at lunchtime.  We happily traded some stories of our AT adventures.  As I expressed my frustration over the bad weather and unlikely events in my second (Southern) leg as compared to my first half he put up his hand.

“Have you lived there your whole life?”

“Well I went to Pennsylvania for college, and I was in California for 4 years in the military. But otherwise, yes.”

“Hmmm.  I think you’re just havin’ a case of Yankee Luck down here in the South, High Road.”

Yankee Luck?  I didn’t like the sound of that, especially because I’m a die hard Red Sox fan and hate anything Yankee!

But maybe he was on to something.  He was more of an expert on these things than I was, his slight drawl hinting of early years below the Mason-Dixon Line.

How could I shake a case of Yankee Luck?  Did I need to start saying “Y’all”?  Start eating biscuits and gravy in town?  Start singing “Dixieland” on the trail?  I wasn’t sure, but I certainly wanted my luck to change.

One often finds scrawling on the walls of an AT privy.  Most of it isn’t fit for publication here, but I loved this note at Pine Swamp Branch Shelter:

Anger may help you climb one mountain, but to climb many you need joy!

Extend the metaphor beyond hiking and it’s easy to see that joy is indeed a powerful force, MUCH more powerful than anger.

The Angel’s Rest Hostel proved to be a nice place to resupply and take a relaxing zero day. 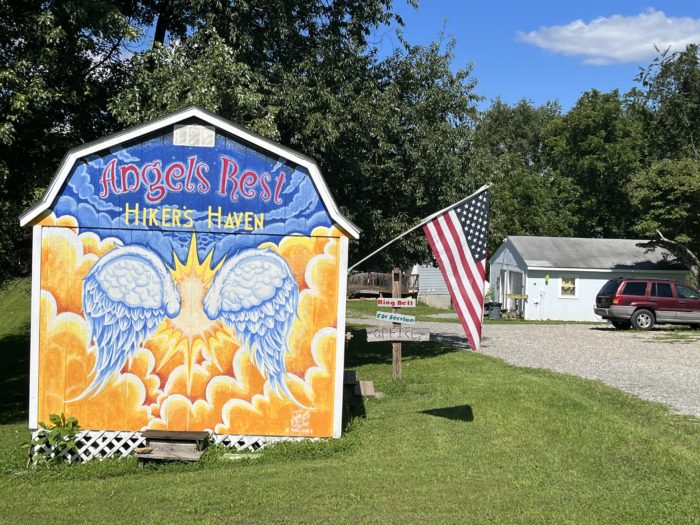 After showering upon arrival I got my food resupply done with a quick walk to the grocery store.  And after laundry and an all-you-can-eat Chinese buffet I got a real treat: a chance to watch the Patriots’ first exhibition game!

I had the TV room to myself, and made good use of it! 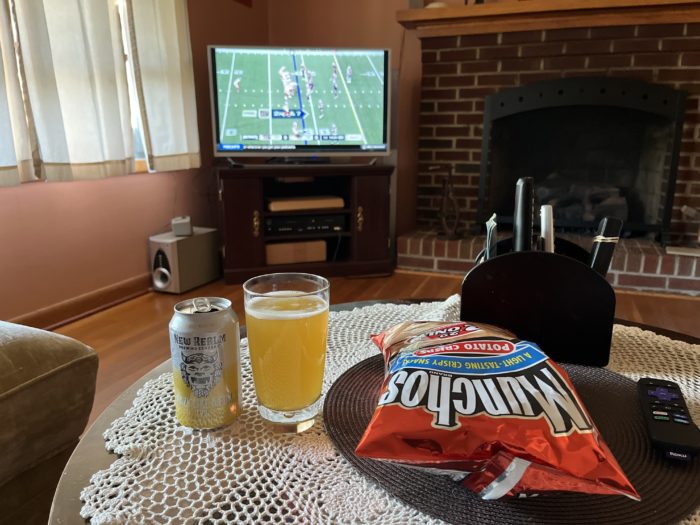 On my zero day I visited the local Mexican restaurant, La Barranca, which turned out to be excellent.  I’m a big chile relleno fan, and for me it’s often the barometer of food quality at a Mexican place.  La Barranca’s was exceptionally done!  The staff was also very gracious in supplying endless chips and salsa as I spent a few hours there on Wi-Fi with a pitcher of Dos Equis Amber!  Gotta get those calories! 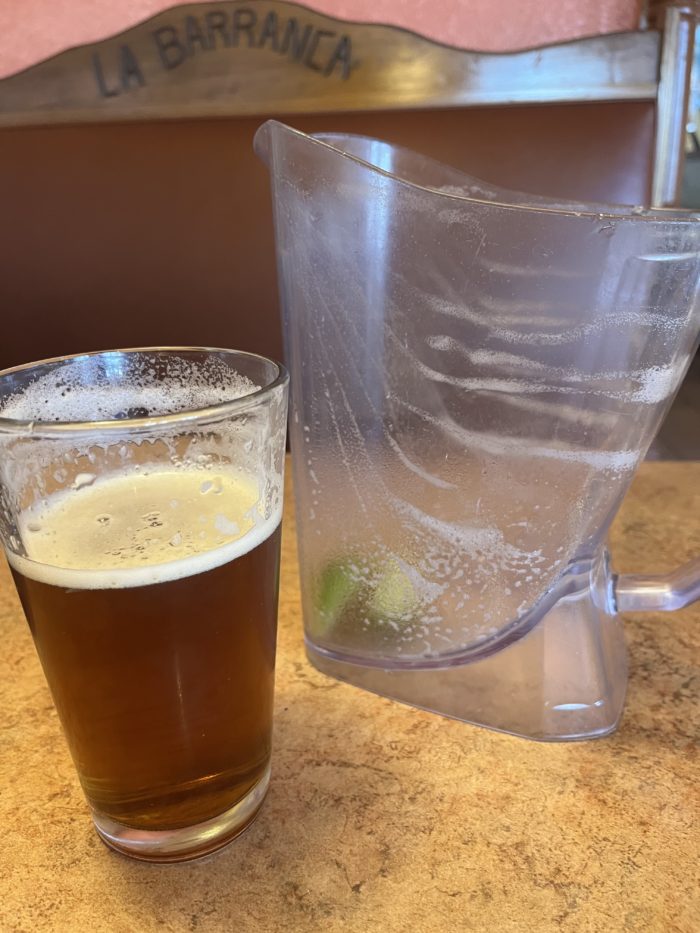 A beautiful day back on the ridge

I cooked up a special three eggs and two bagel breakfast at the hostel kitchen before hitting the trail again.  And what a day I encountered!  Day 115 was my 25th day on my Southern leg, and it was the FIRST in the South with “good air”!  The valley temperature was a cool 56 degrees!

Here’s the view of the cloud-blanketed valley from Angel’s Rest Rock: 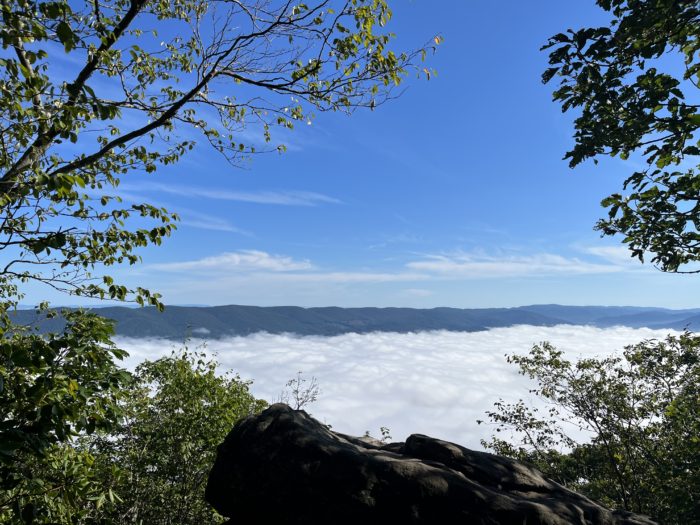 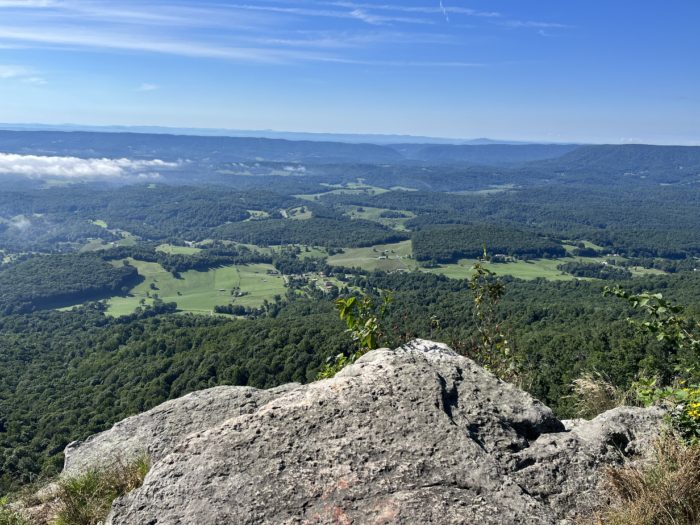 But as fate would have it, there was a final twist awaiting me in my last hour of hiking on that beautiful day.

I had just started the mile-long descent towards Wapiti Shelter when I felt a needle-like pain on the back of my left hand.  It was right in that “V” where the thumb joins up with the rest of the hand. I yelled, swore, and dropped my pole.  God did it sting!

It has probably been at least ten years since I’d been stung by a hornet or wasp.  I never saw the insect that did it.  My hand hurt badly for a couple of hours then started to swell – as shown by these contrasting pictures of normal hand: 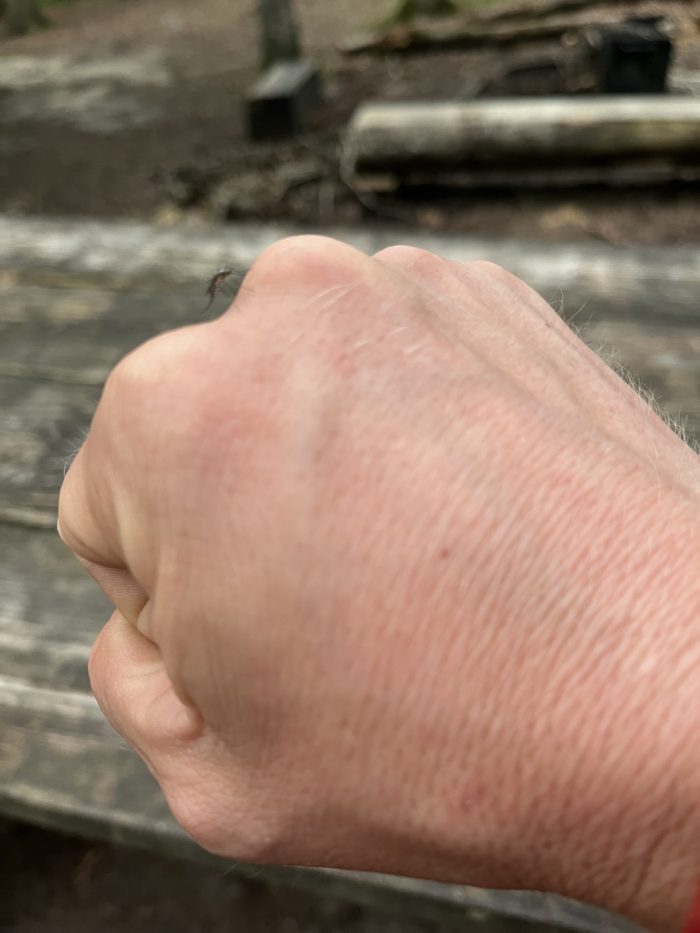 Versus the swollen bite hand: 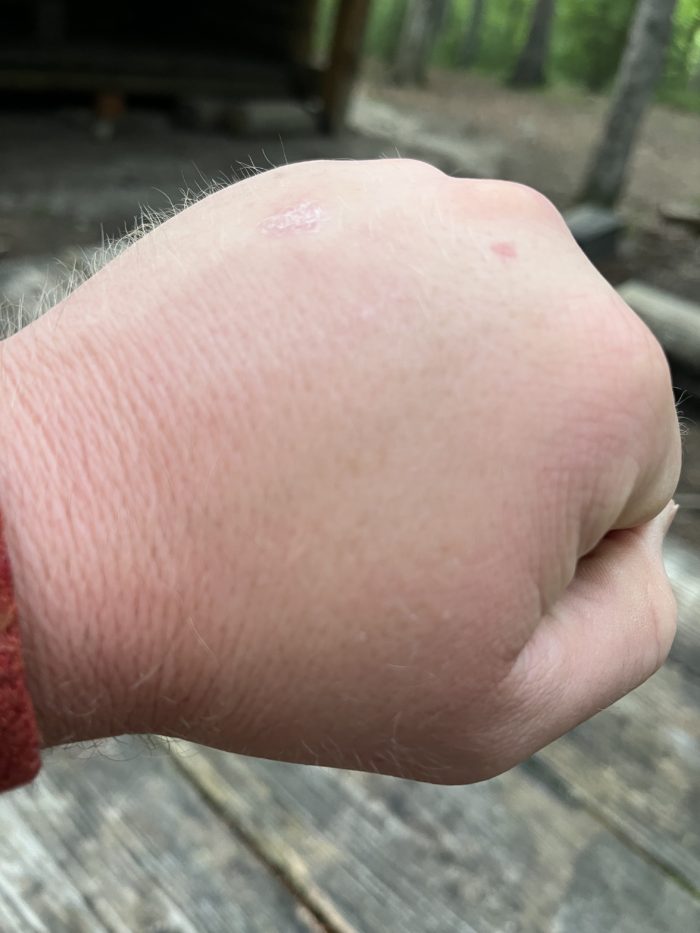 Luckily my ham-fisted hand was still nimble enough to tie up a hammock and fix dinner that night.

When Dr. Google told me that elevating my bitten hand above my head could lessen swelling, I walked around the shelter like that first-grader who’d already asked his teacher too many questions!  Ah, more Yankee Luck I guess.  An MMM I’d rather forget.

Escaping through the green tunnel

That’s all from Virginia for now!  I’ll leave you all with a photo of one of the famous “green tunnel” sections of the trail.  In these areas, rhododendrons almost completely block out overhead light, leaving a cool tunnel to walk through.  I’ve walked through some sections up to a mile in length! 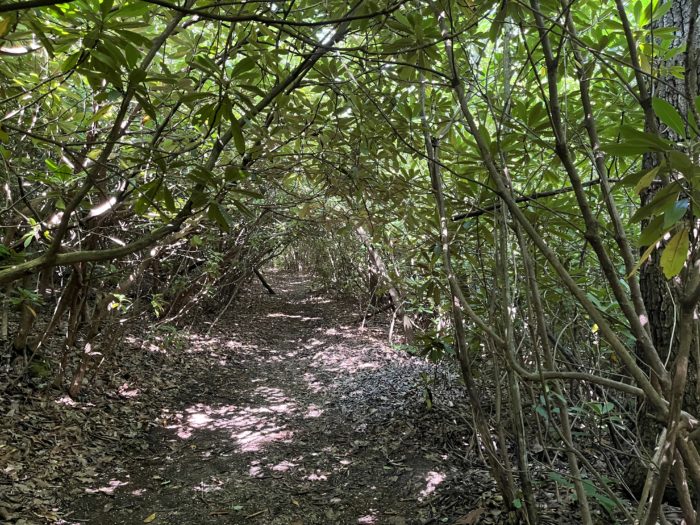