Before falling asleep last night, I checked the weather report for the area and was happy to see a “zero percent chance of rain” predicted for the evening and early morning. Of course, mountain weather is very unpredictable and sure enough, heavy rain fell during the night. I woke up at 5 AM to the tough realization that I had made a very rookie mistake; falling asleep with my shoes outside of my tent vestibule. I made the walk of shame to my shoes a few feet away from my tent, and for the first and only time on my thru-hike, I told myself “I’m ready to be done with this sh*t” as I slipped on my water-logged shoes. I was exhausted, more mentally than I was physically, but the only option was to suck it up, and start making my way down trail as I approached the base of Wildcat Mountain, regarded by many as one of the steepest climbs on the entire AT.

The climb was as advertised; I was instantly greeted to very steep terrain covered in large boulders and tons of roots. I was done feeling sorry for myself and I was soon in the right mindset to tackle the tough terrain for the day, ready to grind and push my body yet again close to its limits. Soon the hiking turned to rock-climbing, making the rock climb up Mt Webster seem like a cake-walk compared to this sketchy climb. At one point, a set of stairs were built into the side of a steep and slick rock face to assist hikers, but halfway up the rock slab, the stairs disappeared, forcing hikers to figure out how to get to the top without any assistance. 2,000 feet and two miles later, I arrived at the Wildcat D peak, before the technical traverse to the official summit of Wildcat Mountain. The sun was shining, and I was able to see Carter Notch Hut down below and the Carter Range from across the notch, my upcoming destinations.

A steep and technical descent down the Wildcat range leads to the Carter Notch Hut, the final AMC hut in the White Mountains that the AT leads to. Jackrabbit was already there waiting for me. I have no idea how he does these descents so quickly, but his name is Jackrabbit for a reason. We ate some snacks before continuing on, instantly climbing to the summit of Carter Dome at 4,800 feet. The first half of the climb was very steeped and instantly zapped all of the energy right out of me, and I was gassed by the time I arrived to the summit. At this point the peaks were completely covered in clouds with heavy winds, and on-and-off rain continued the remainder of the day.

Remaining on the ridge, I reached the peaks of Mount Hight, South Carter Mountain, Middle Carter Mountain, and North Carter Mountain, followed by the sketchiest descent I’ve ever done, as I slowly made my way off the ridge. I was mentally exhausted from the terrain, but onward I kept trekking, essentialy “zombie marching” my way to the base of Mt Moriah, the final 4,000 footer the AT climbs in the White Mountains. A four mile descent down to Rattle River shelter capped off the toughest day yet on trail for me, and I have absolutely no shame in saying that this day almost broke me. Not in a “I wanna quit” way, but in a “I don’t know how much more I have to give” kind of way. I fell asleep that night reminding myself this is what I wanted; to find my limits and see if I can push past them. 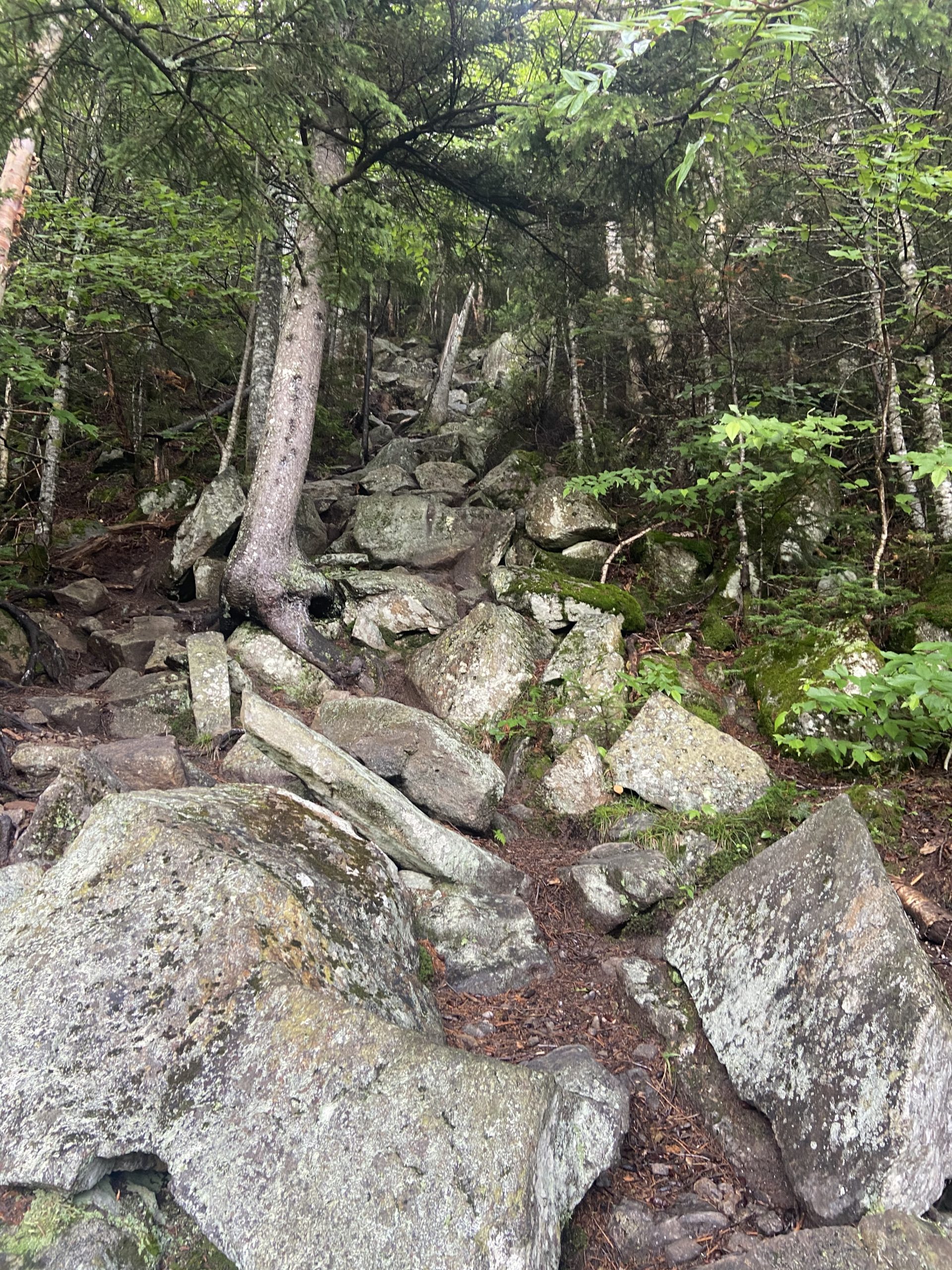 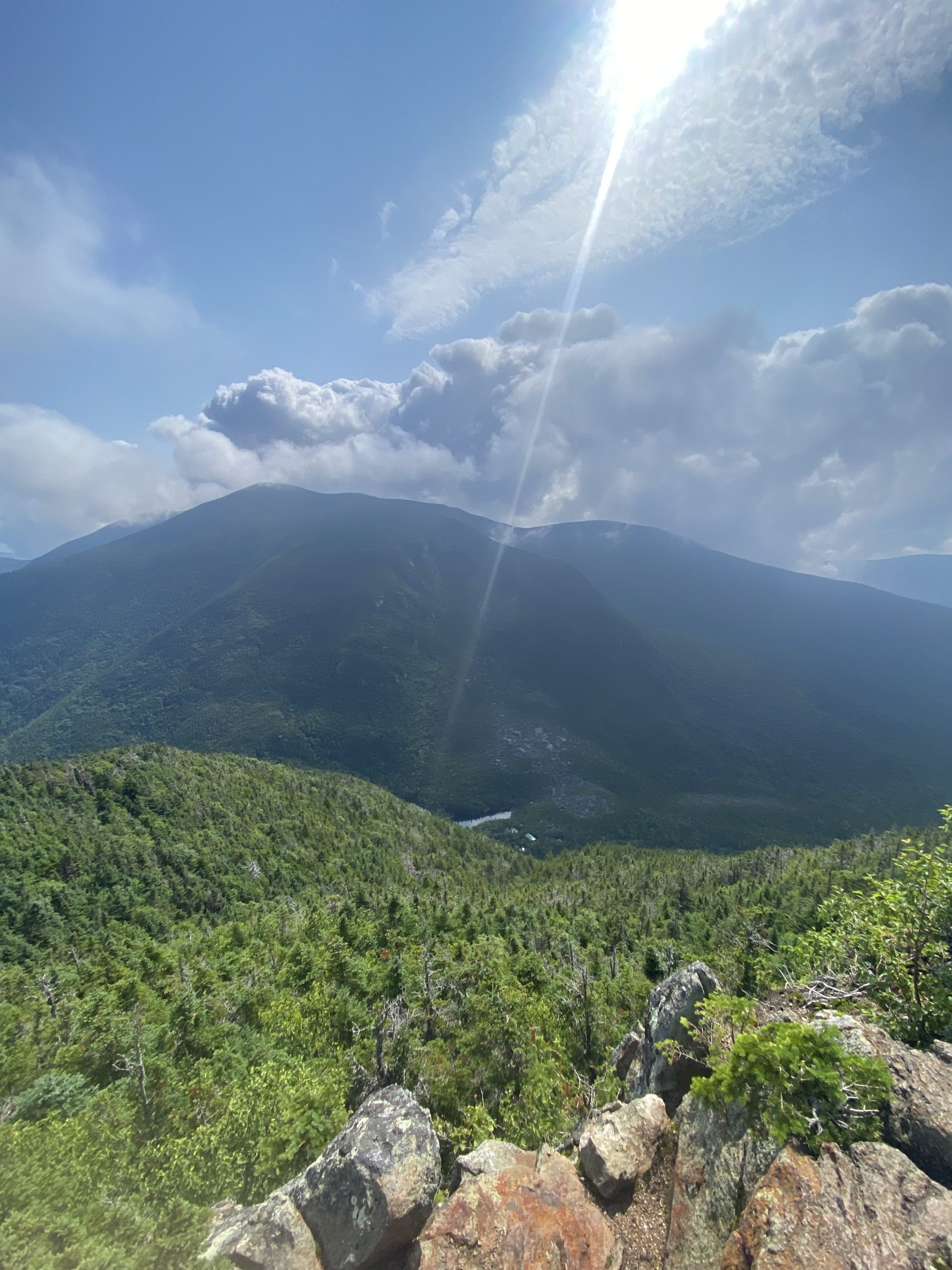 For the first time in a long time on my hike, I woke up with sore legs. It didn’t matter because I was extremely stoked for today, because today was the day I would be crossing into Maine. I was ready for the beautiful behemoth that is the Maine wilderness; Maine is the second longest state on the AT featuring 282 trail miles from the border to the Northern Terminus on Mt Katahdin. Although the White Mountains were now officially in the rear-view mirror, today wouldn’t be easy by any means.

A flat three miles to US Route 2 was a great way to get the legs loose before a long and gradual climb up an unnamed ridge. Up and down was the theme of the day, through more rugged terrain. There was a several mile-long stretch where the trail was very poorly maintained, and it felt like I was bushwhacking through downed trees and low hanging branches. I passed several large ponds and lakes on my way to Mt. Success, the final ascent in New Hampshire.

In classic New Hampshire fashion, the climb started out very steep and rocky before mellowing out en route to the summit at 3,560 feet. The open, rocky summit offered tremendous views, and I soaked in my final peak in NH before descending down to the New Hampshire/Maine border sign. I got my photo taken at my final border crossing sign of the trail, and shortly after arrived at the Carlo-Col lean-to. I fell asleep early that night, feeling totally exhausted from my effort the past few days. I had one more big day ahead of me before I could finally get some rest in the town of Bethel, Maine. 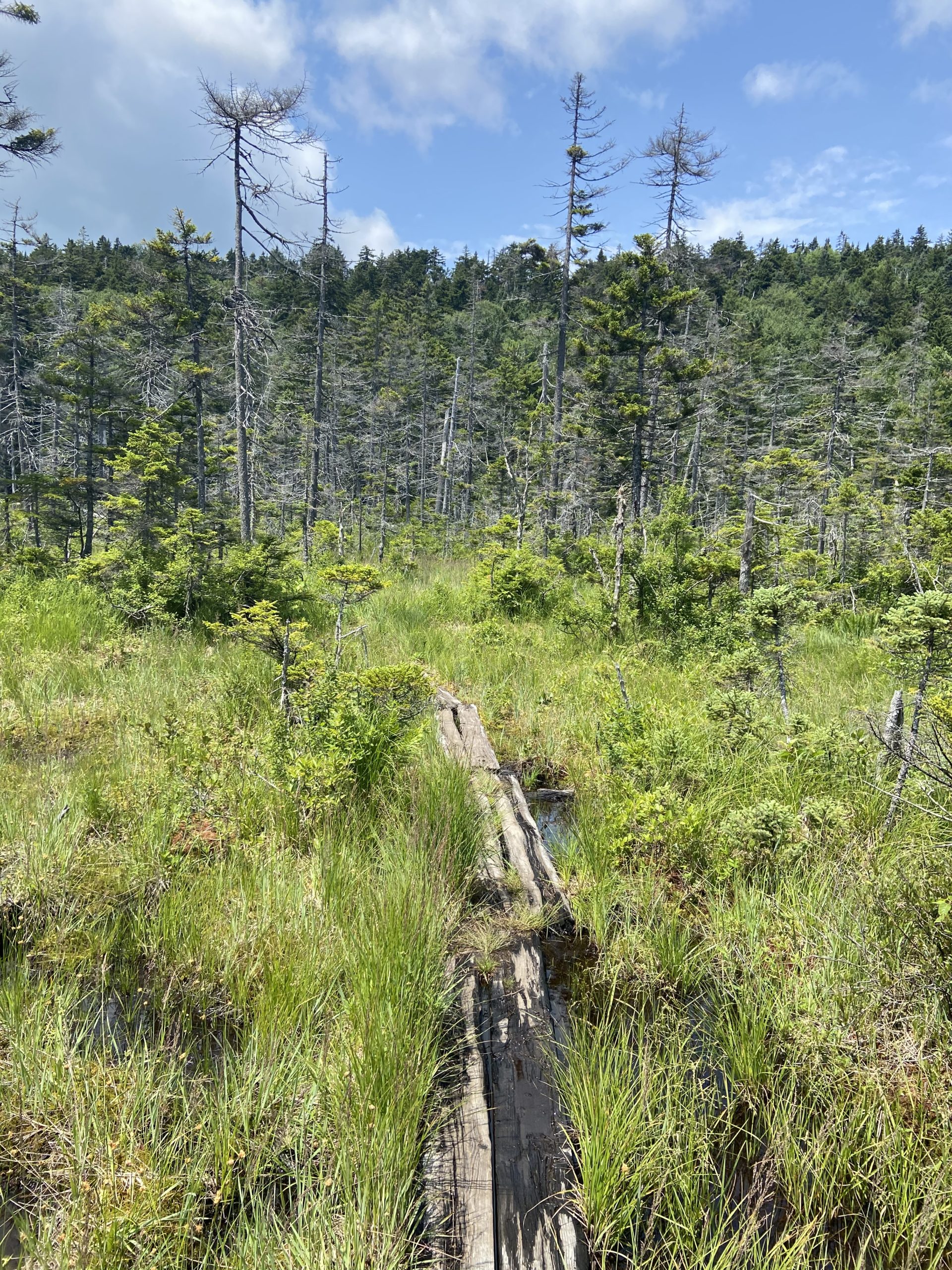 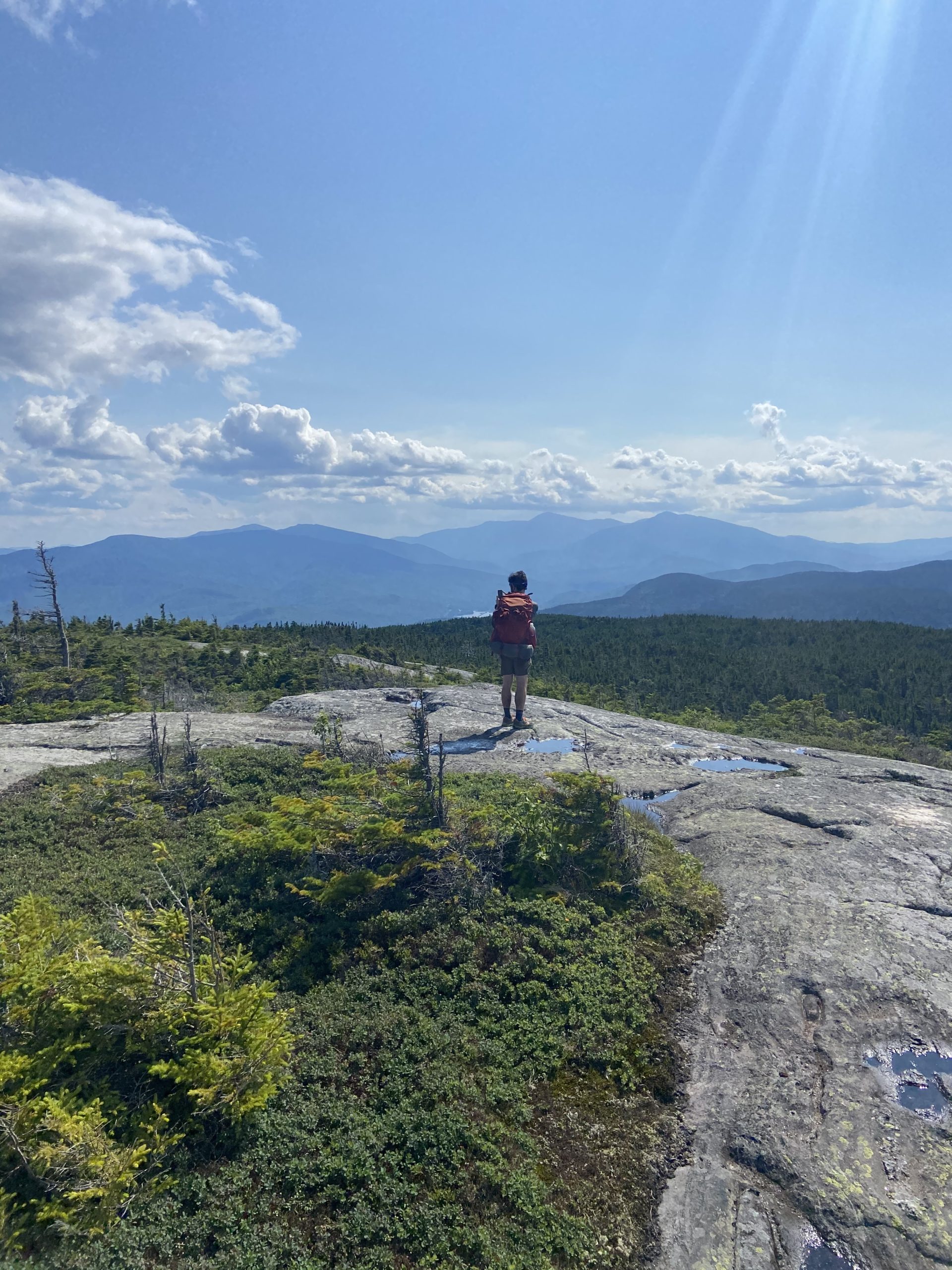 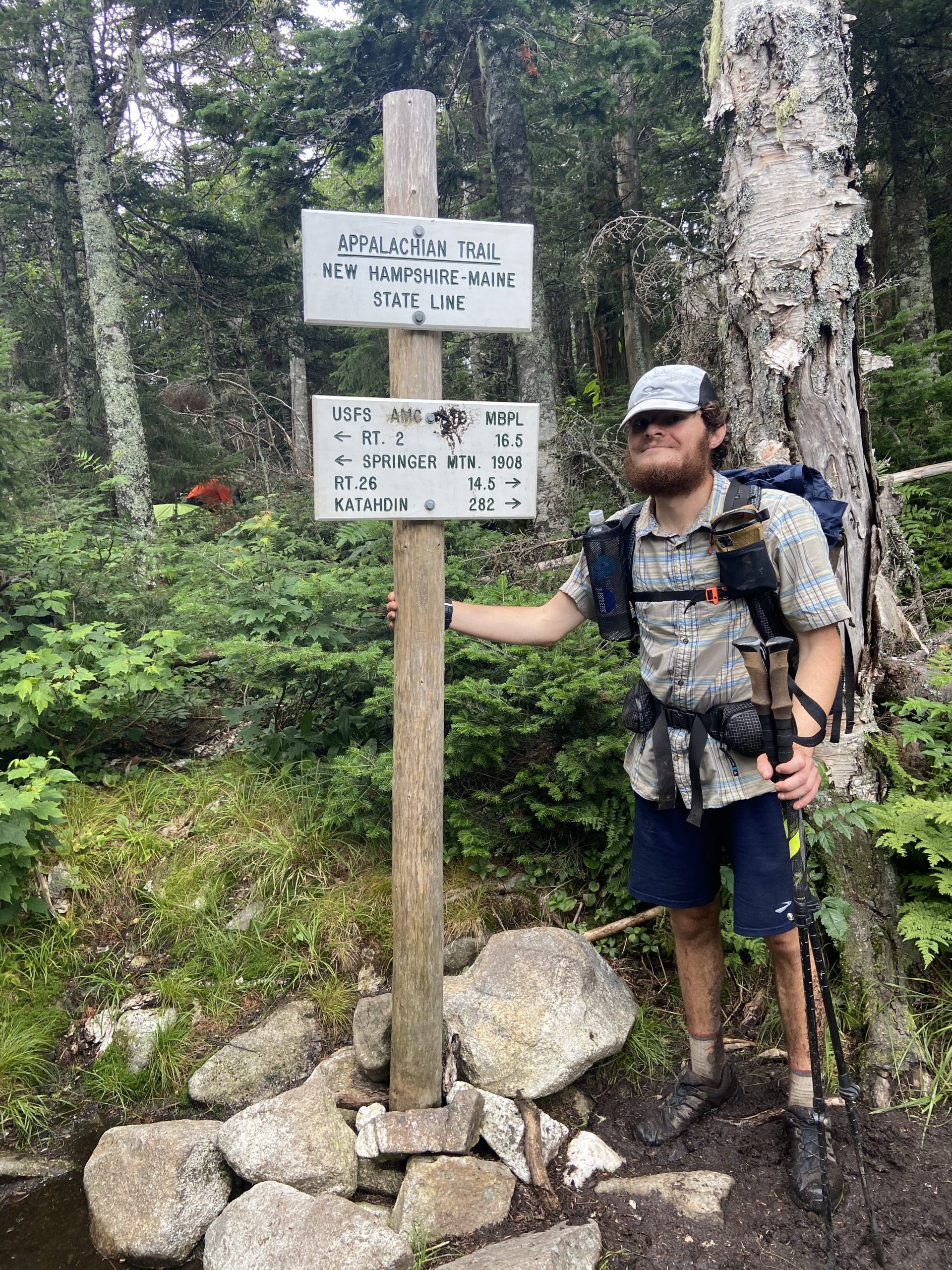 I was awake and packed up early, stoked to take on my first day in my new state. I knew I had a very tough day ahead of me, but knowing that I would spend the night at my friend Trevor’s house in Bethel was great motivation to crush the miles. It was only 14 miles to Grafton Notch, but these 14 miles would prove to be some of the toughest miles of the entire trail. Southbounders had been telling me for weeks about how rugged the trail is in the first 100 miles of Maine. Goose Eye Mountain was the first traverse on tap for the day, and the rugged terrain of Maine made itself present right off the bat. The climb up the west peak wasn’t long, but none of it was hiking- it was all climbing slick rock faces, featuring many rebars and ladders. Excellent views greeted me on the summit as I made my way to the North peak, featuring very similar terrain.

It took forever to descend off the Goose North Peak due to the ruggedness of the trail. Many time I found myself getting on my butt and sliding down slick rock slabs, hoping I’d be able to catch myself at the bottom. Throughout the descent I had to down-climb sketchy rebars that went straight down the side of a rock cliff. More descending soon led me to the entrance of Mahoosuc Notch, regarded as the hardest (or most fun if you’re an optimist) mile on the entire trail. There is no trail in the Mahoosuc Notch, as the entire mile is a jungle-gym of large boulders you have to climb and squeeze your way through. There are blazes to show that you’re headed the right way, but it’s up to you to choose your path through the car-sized boulders. To get a great visualization of the Mahoosuc Notch and the tough terrain leading up to it, watch this video.

It took me one hour and fifteen minutes to make my way through the mile long notch, which I was pretty proud of (one hiker told me he heard of an instance where it took a couple Southbounders 5 hours to traverse the notch). I was totally zapped of energy at the end, but I was just glad the hard work for the day was done!

Immediately following the Mahoosuc Notch was the 1,000+ foot ascent up Mahoosuc Arm. Again, there wasn’t much of a distinctive trail to the summit, as the entire climb was up steep and slick rock slabs with some roots for foot placement. From there, more slow-going miles past the pristine Old Speck Pond leads to the base of Old Speck Mountain, Maine’s fourth highest peak at 4,170 feet. I had climbed Old Speck last summer with my friend Trevor so I knew what to expect. It was more rugged terrain and rock climbing to the summit, which was actually very fun, and I enjoyed the fantastic views of the Maine wilderness surrounding me. On the summit, a short side trail leads to a fire tower, offering more fantastic views.

Over a year ago at this exact spot, I found myself day-dreaming about thru-hiking the AT, and it was a surreal feeling returning as an AT hiker. It was a long but relatively cruisy 3.5 mile descent down to Grafton Notch at Maine Route 27 where Trevor would be picking me up. It was 4:00 and it took me about nine hours to hike (more like rock climb) 14 miles. I was so used to doing 14 miles before my lunch break, and I was absolutely exhausted, more so than I had been after my 30 mile effort in Virginia. I looked forward to a much needed shower and a good meal. Although this was one of the hardest days on trail, it was definitely one of the most rewarding. 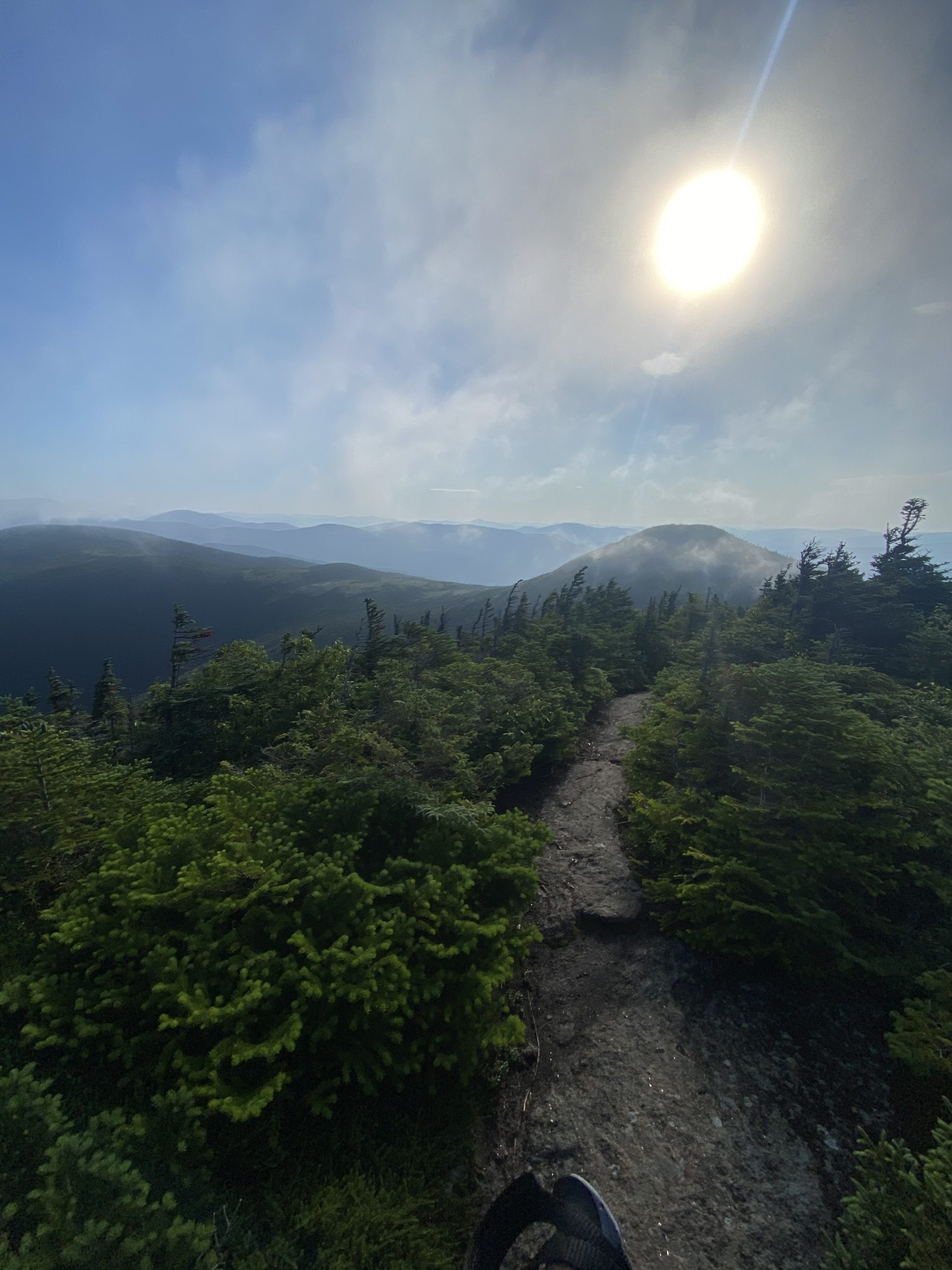 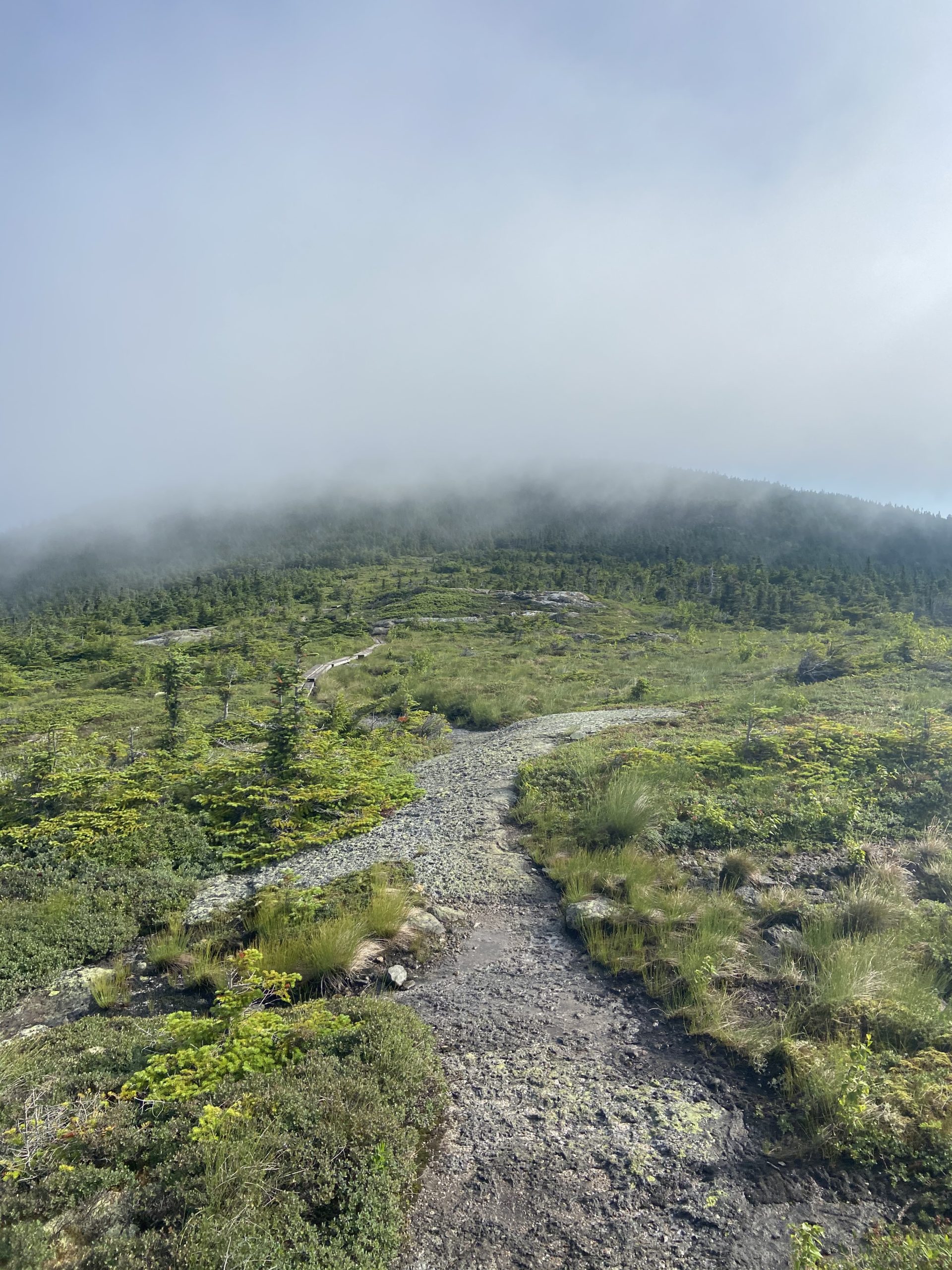 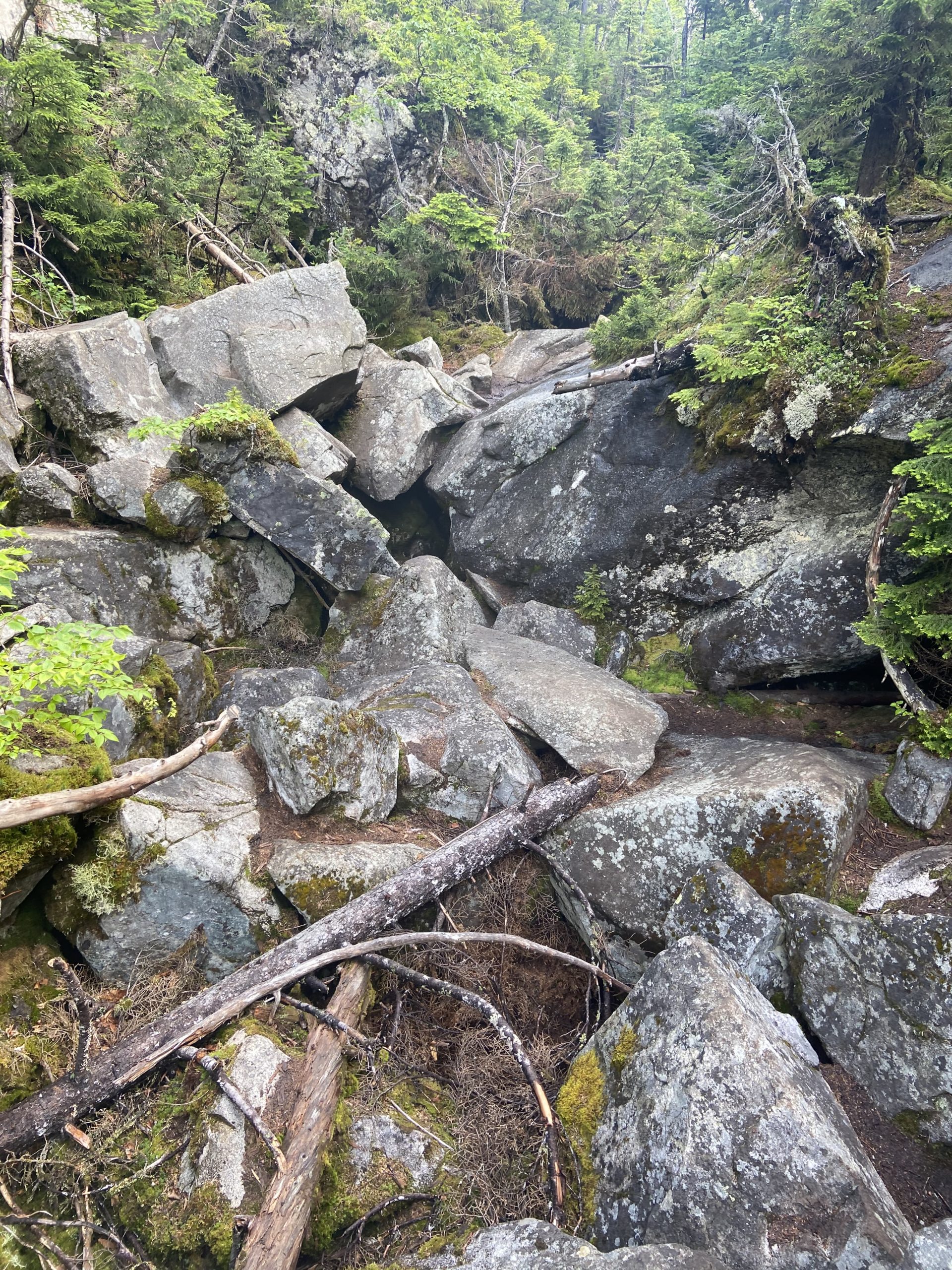 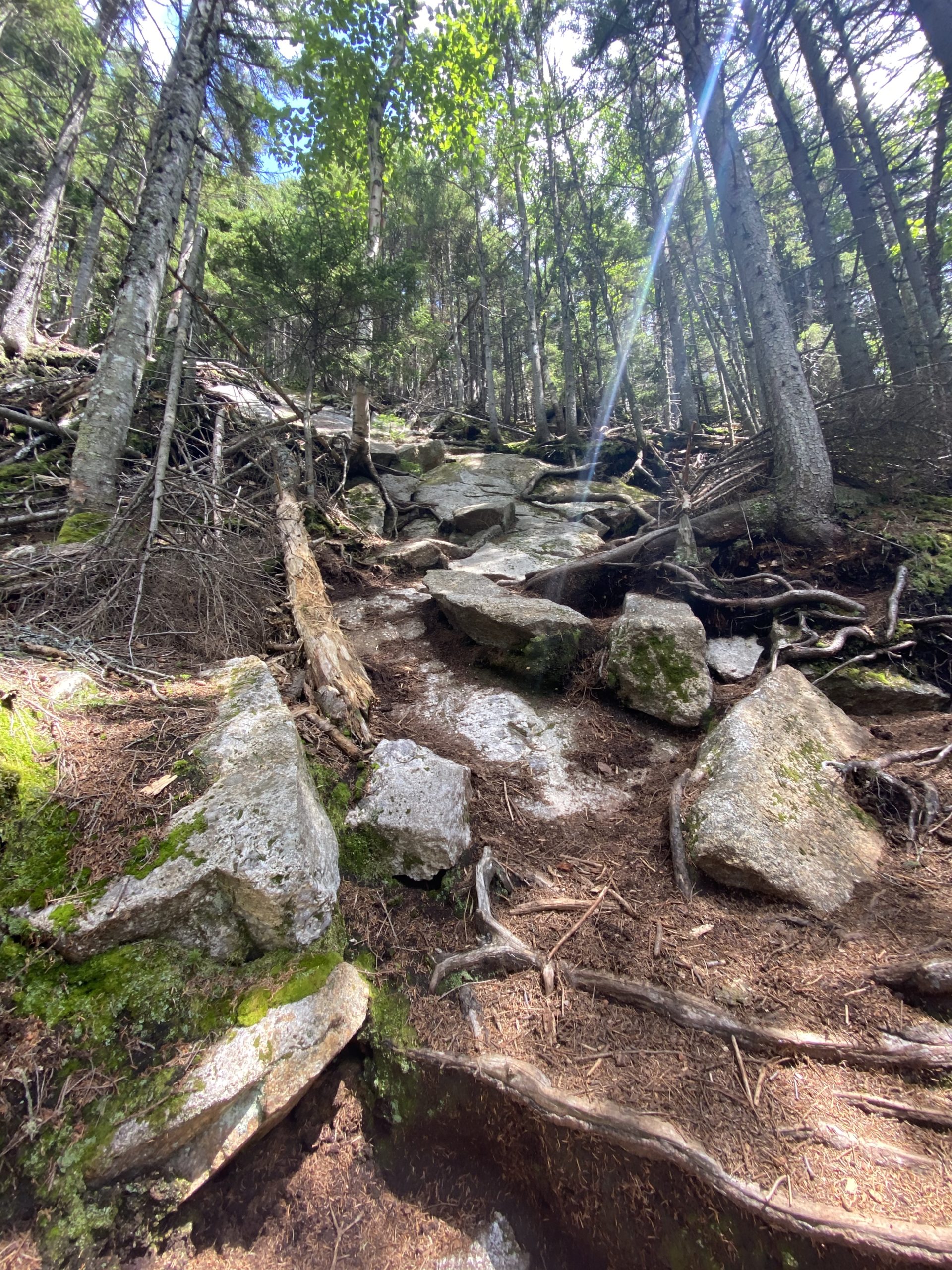 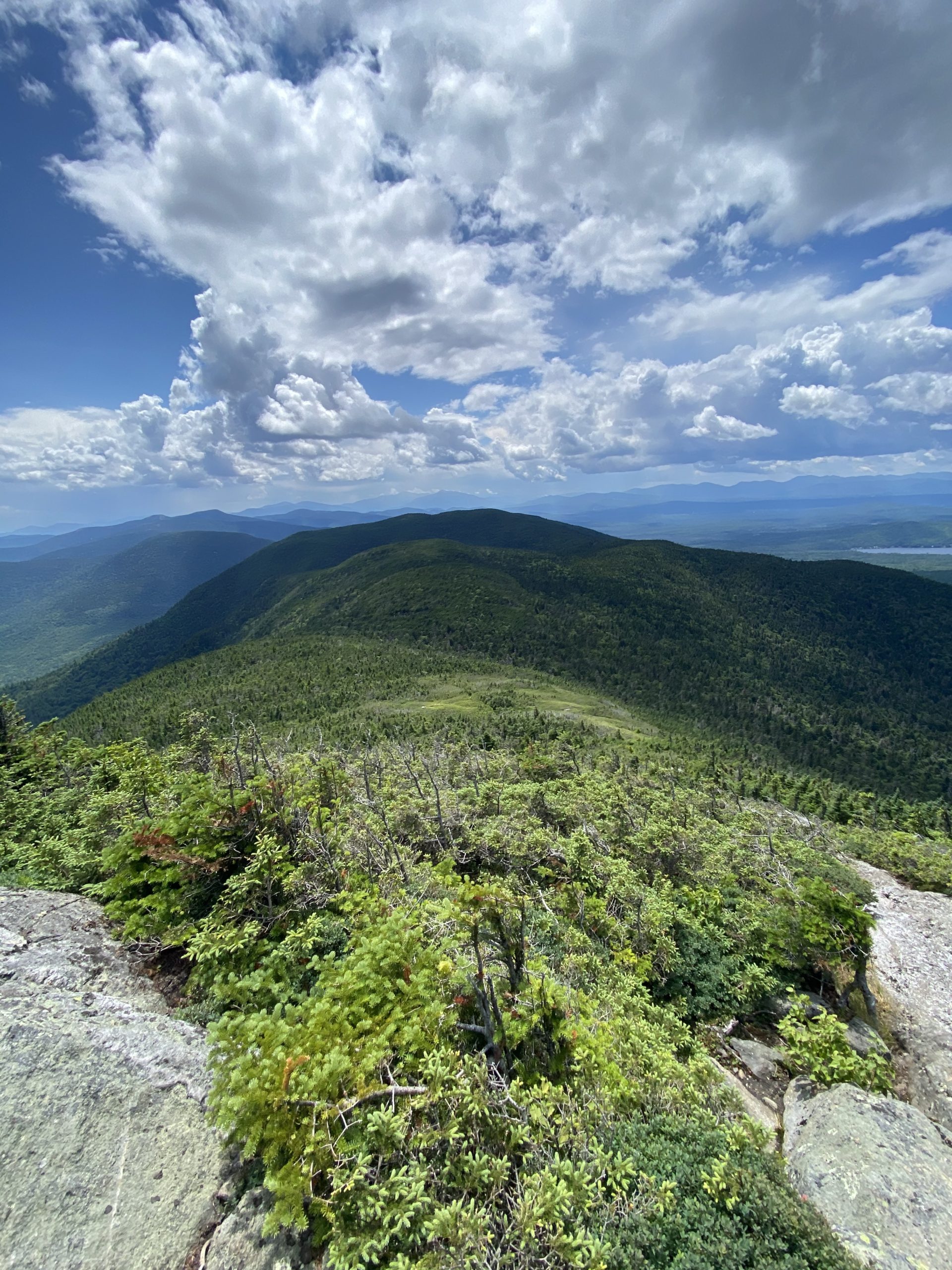