AT Days 116-119: Finding food is easier than finding hikers

I ate especially well during this four day stretch in southern Virginia, but rain and solitude were also notable.  Here’s the daily breakdown:

Where are all the hikers?

One of the major reasons I chose to do a flip-flip AT hike was to avoid the crowds starting NOBO hikes in Georgia.  To me, that would significantly degrade my in-the-woods experience.  Starting north from Harpers Ferry gave me a nice balance of alone time and familiar faces at shelters and hostels.

But here in the South I’m encountering much more solitude than I expected.  During much of the last month I’ve felt like I’m the only one hiking this trail southbound!  NOBO hikers and hostel owners have more or less confirmed this: “You’re the first SOBO I’ve met”, or “Maybe I’ve seen one other flip-flop hiker so far”.  I’ve had solo stays at most of the recent shelters as well.

I’d not expected this when I departed Harpers Ferry as flip-flop tag number 69.  Sure, trail attrition was going to eliminate at least 70% of these hikers, but wouldn’t that still leave fifteen or twenty on the trail?  And the largest chunk of flip-flop hikers were due to start within three days as part of the Flip-Flop Festival in late April.  Where were those hikers? Did none of them hike faster than I did going north?  I really didn’t think I tore it up taking 86 days to Katahdin- but maybe I did.

Don’t misinterpret me, I’m very comfortable with solitude (obviously), but I’d not expected this level of it on my southern leg.

I can definitely say that this has been the only four day segment of the AT where I’ve eaten food that wasn’t in my pack.  Here’s how I tackled my hiker hunger on or near the trail: 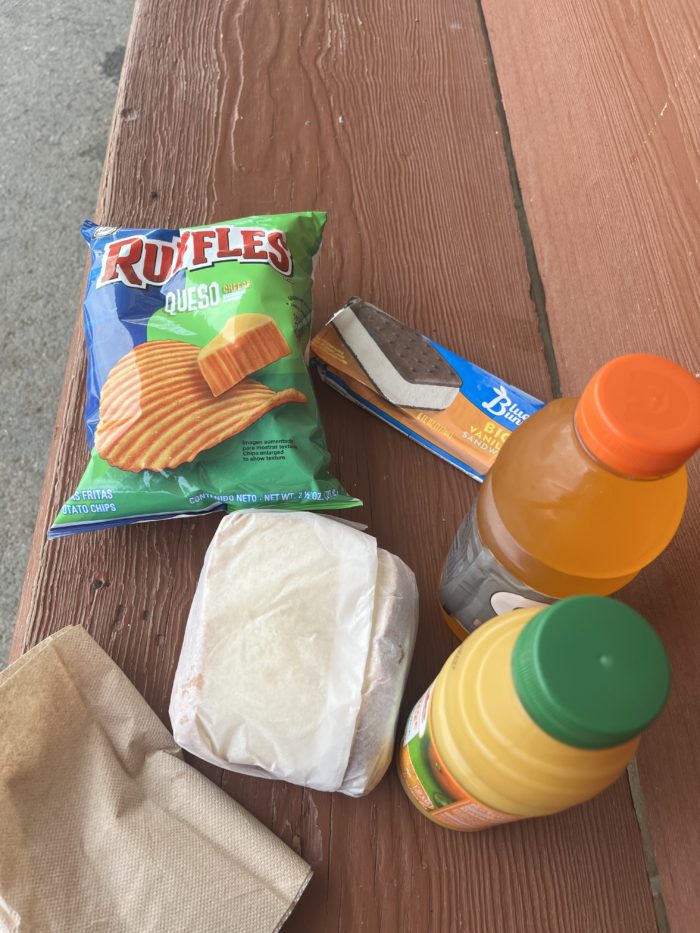 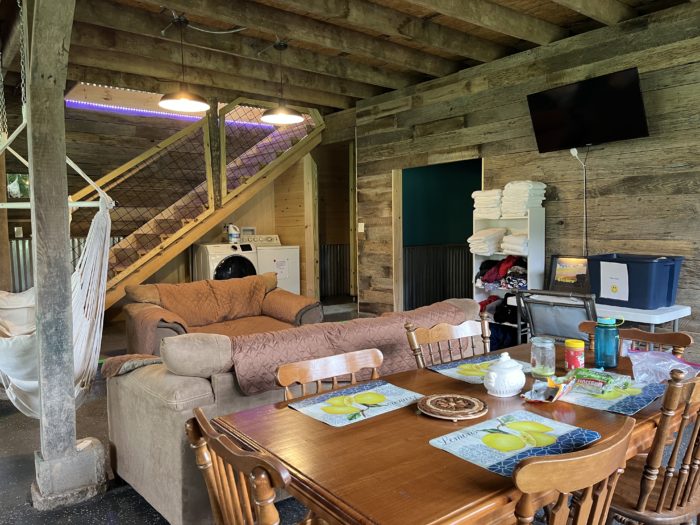 The hostel owners are AT thru-hikers who really know what hikers need.  I enjoyed a cheeseburger, a BBQ rib sandwich, and microwave popcorn that night.  When I arose on Day 119 I made fresh waffles in the kitchen- those were incredible, and my MMM for that day!

Somehow my stomach, rather than being appreciative of the extra food, is now groaning earlier and louder each morning!  I’m compelled to feed the beast frequently!

In my prior post, a beautiful “good air” day departing Pearisburg gave me hope that the awful Virginia weather was changing.  Nope.

Day 116 started out cool, but the clouds would open up midday with a soaking 90 minute rain. Drenched, I cut my hiking day short around 2 PM to dry out my stuff inside Jenny Knob Shelter: 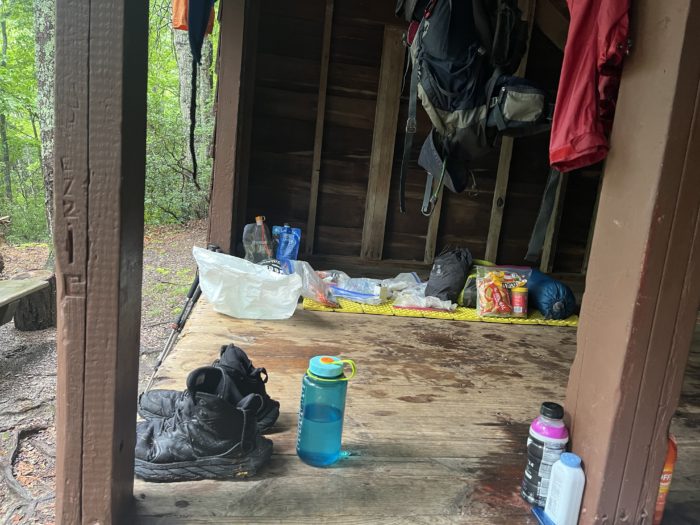 With more heavy rain predicted, I’d sleep in the shelter that night and the following night at Jenkins Shelter.  I’m not a big fan of sleeping on hard wood floors, but I had each place to myself and felt I’d stay drier inside.

The next two days would ALSO feature heavy afternoon rain but I’d actually be under cover and stay dry both times!  Was my Yankee Luck changing?  I sure hoped it was a sign.

Highlights of the hike

I’ll be honest- I don’t have a worthwhile photo of scenery to share from Day 116 and 117.  Most of the trail featured gradual ascents and descents, and rain and fog dominated.

The next two days were spent at elevations ranging from 3000 to 4500 feet, and the non-rainy times were cool, quiet and pleasant.  Here’s a nice picture from my midday walk to Burke’s Garden Hostel: 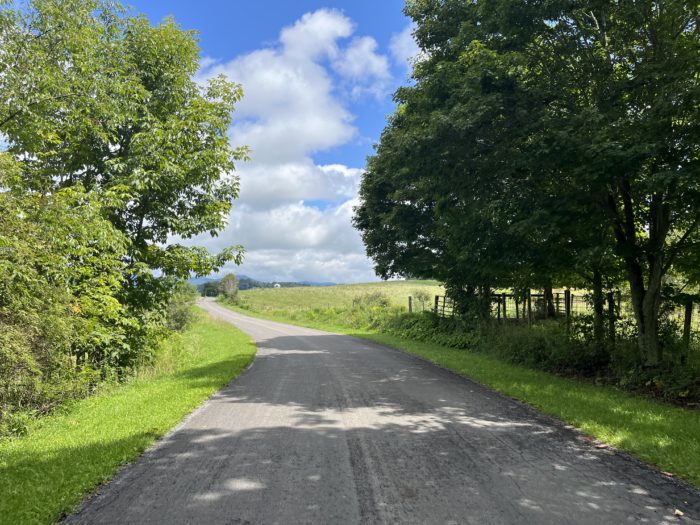 And when I departed the hostel on Day 119, I’d head up to miles and miles of high-elevation pastures and meadows: 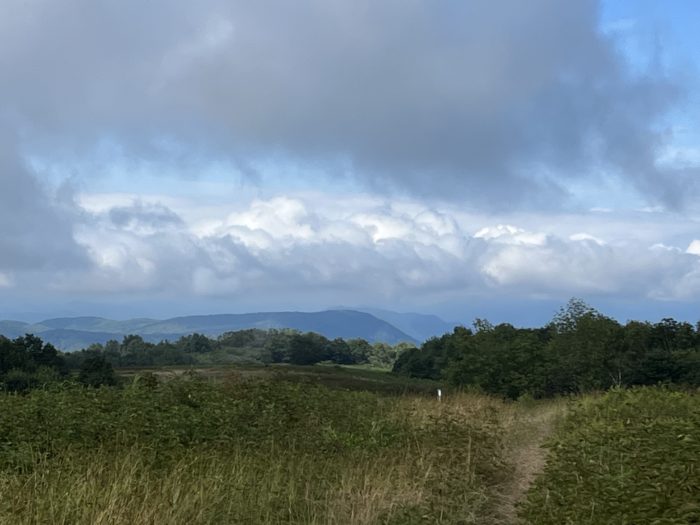 If someone asked me “Hey High Road, how do you deal with walking through miles of tall wet grass in open fields?”, I’d say:  “You’ve got to put it pasture!”

The scenery really was quite beautiful- so much that I broke into singing Joe Cocker’s “You Are So Beautiful” as I surveyed nature all around me.  Now has there has there ever been  such a singer/song contrast in the history of music than that?  I mean, that short ballad is so heartfelt, moving and direct – and it’s sung by one fairly ugly man, both in looks and voice.

I mean, Joe Cocker wasn’t born with George Clooney looks, but he didn’t do much to help himself out with that messy hair and beard.  In later years he looked like George Carlin after a night-long bender.  And that gravelly voice grinding through the end of the song?  Ugly, so he attempts the save with that little falsetto “to me-e-e” at the end. Somehow, it worked!

I’m not a big player in the dread space – especially here on the AT.  I take things one step at a time with quiet confidence.  But an upcoming “bridge out” water crossing got my attention, especially because:

So I did a fair amount of dreading on Day 119 as I approached Lick Creek.  But although I had to take my boots off and ford the river in water shoes it really wasn’t bad.  Just below the knees.  Again, reality had turned out to be much tamer than the dread.  Shame on me! 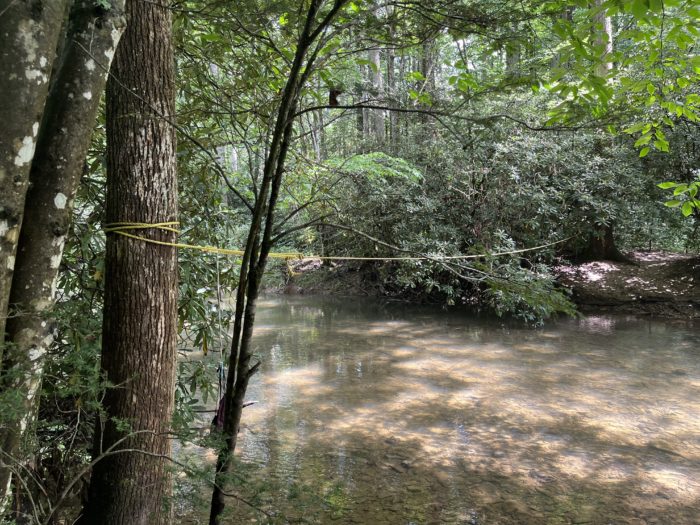 Warning to the “Ear Bugs”

Now you’ll note in this blog that High Road is happiest at high elevations – where bugs and other nasty things disappear.  But the trip down to Lick Creek brought all those things back, including those persistent little bugs that want to get in my ear!  This is a long overdue warning notice to these nasty insects:

ATTENTION EAR-LOVING BUGS:  There is absolutely no medical evidence that some type of bug nirvana exists between the hammer and the anvil of my inner ear.  So stop trying to fly in there!  Any attempt to do so will only end in your own early death!

I just had to get that in print.  Let’s see if it works…

I’ve taken a lot of pictures of interesting flowers here in Virginia, but hadn’t yet shared any!  I’m including a bunch below – enjoy! 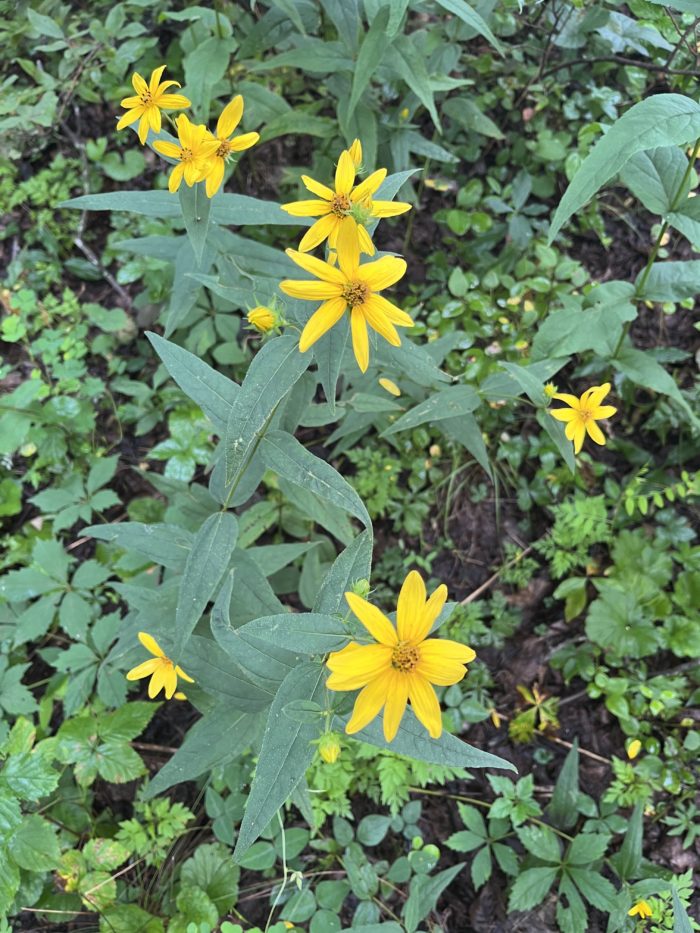 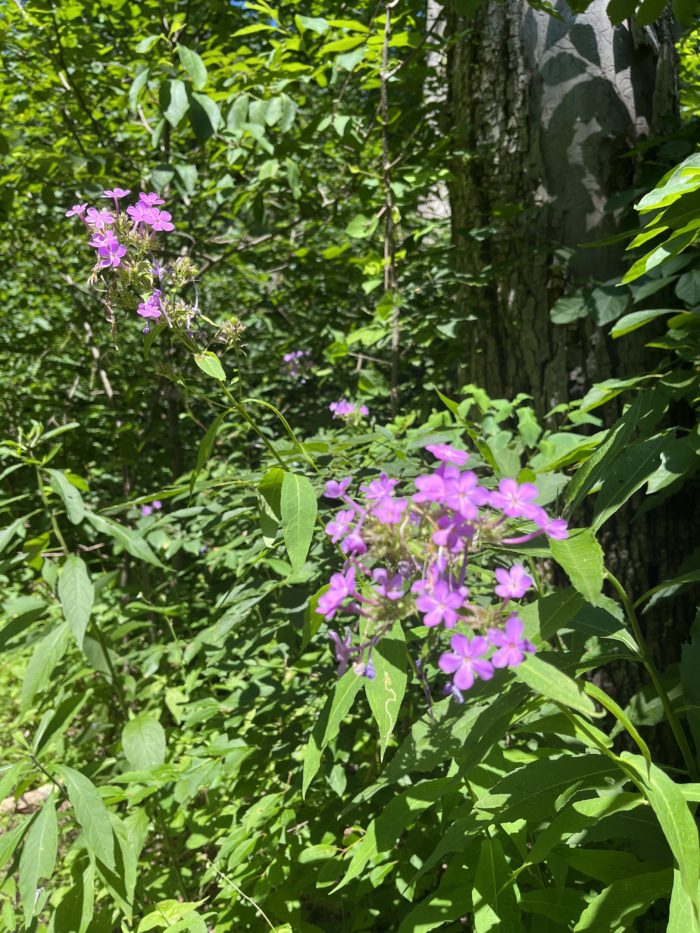 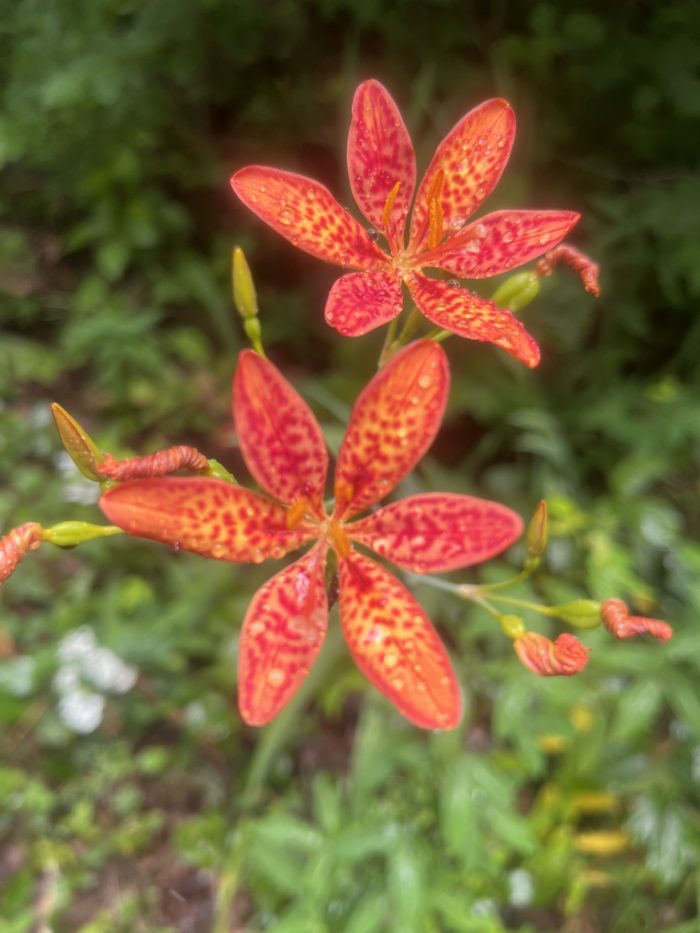 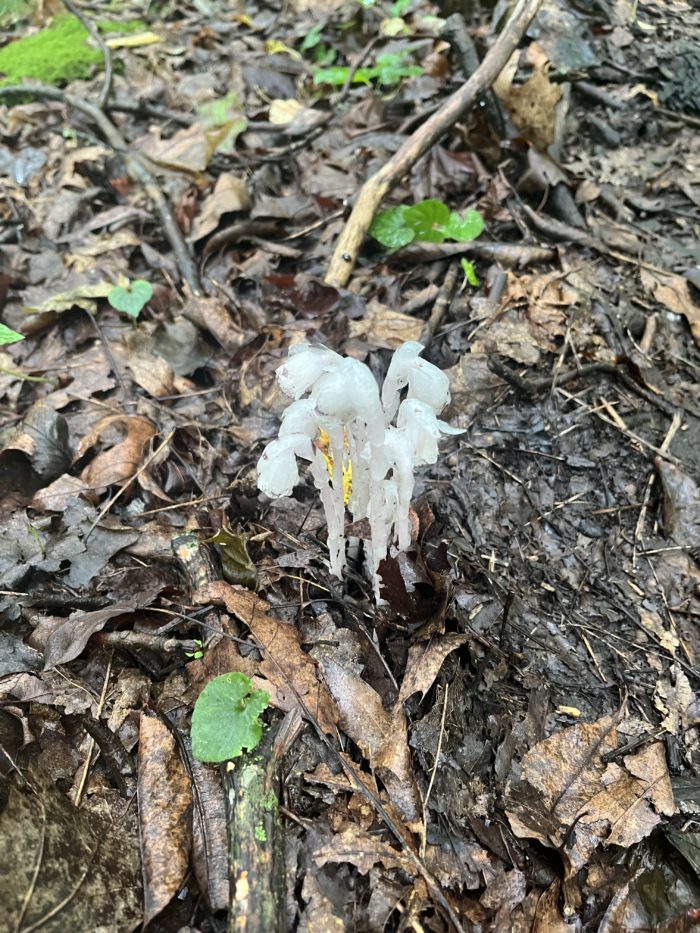 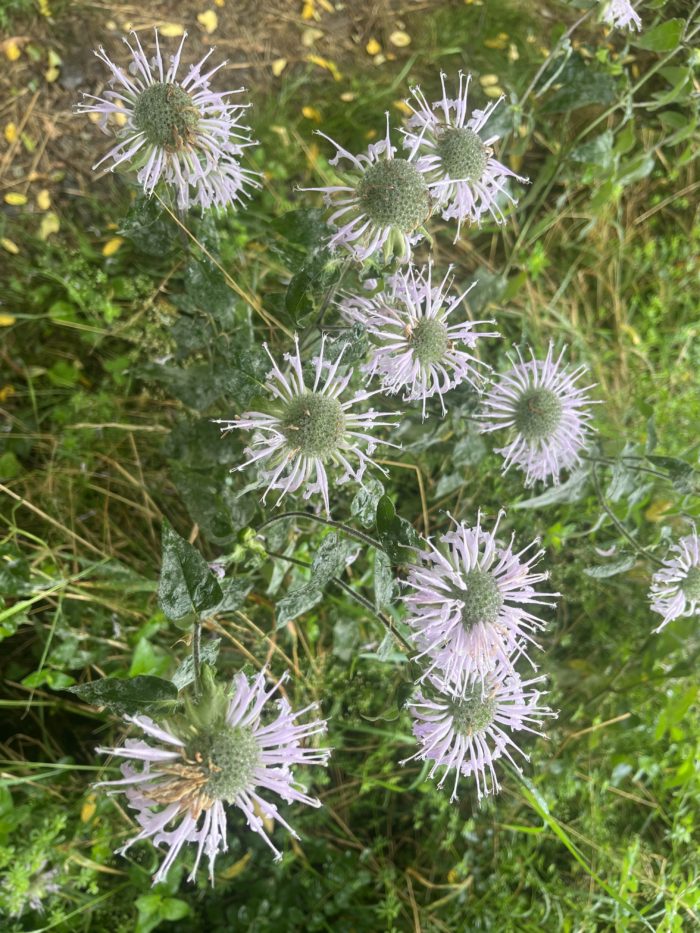 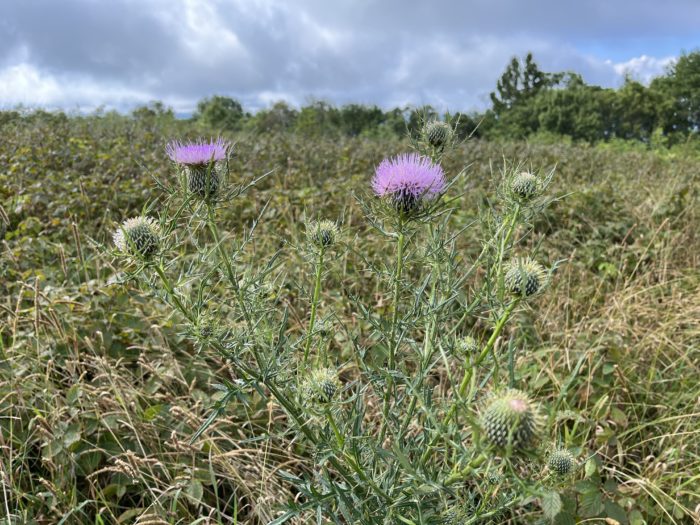 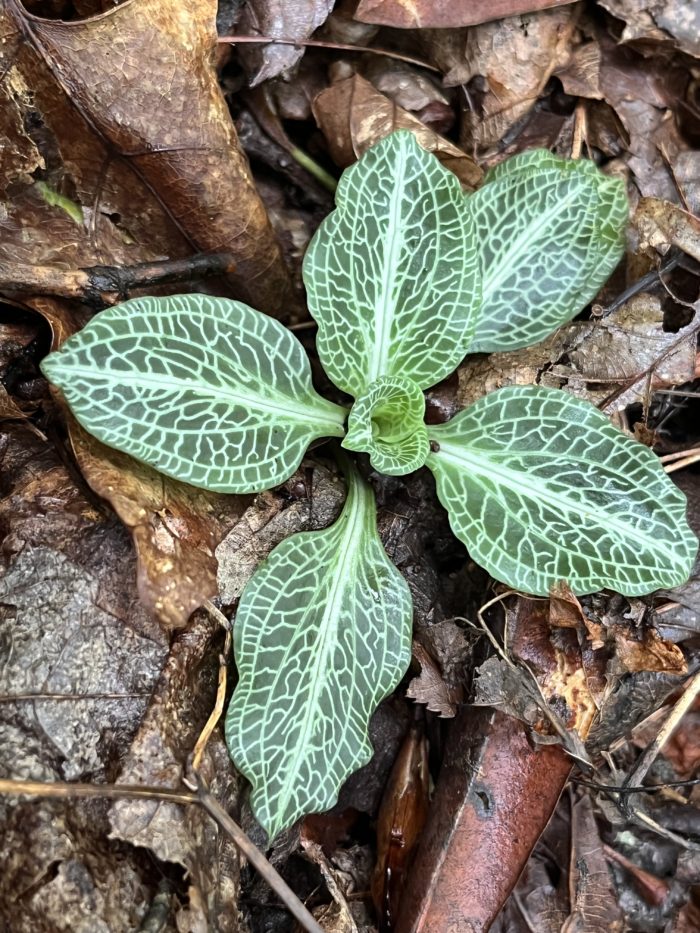 (Won’t you take me to) Fungi-town

And let’s not leave out that other category of useful growing things, fungi!  Virginia has provided some real interesting specimens: 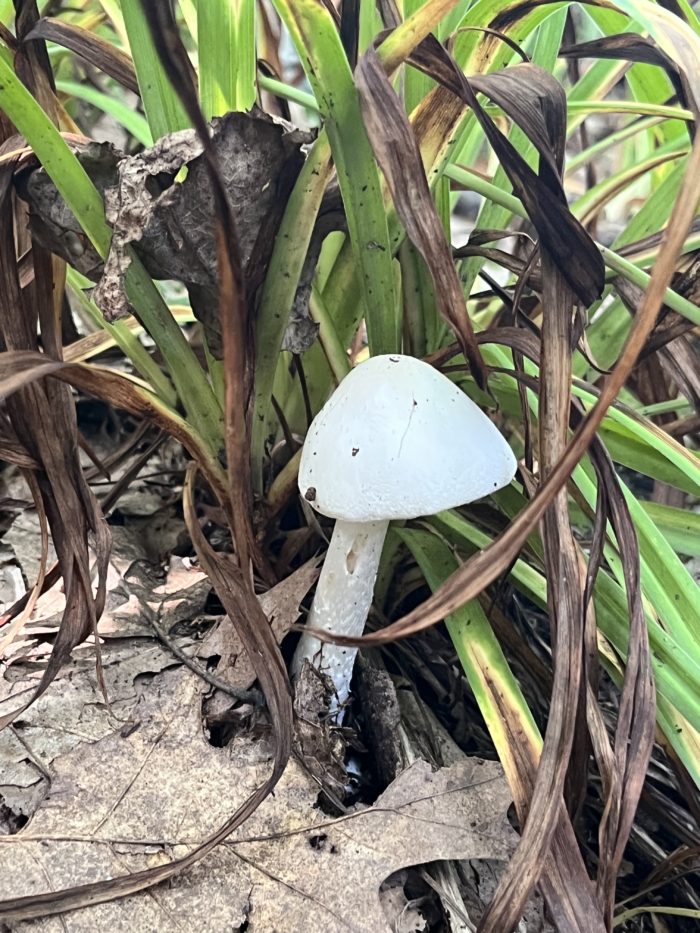 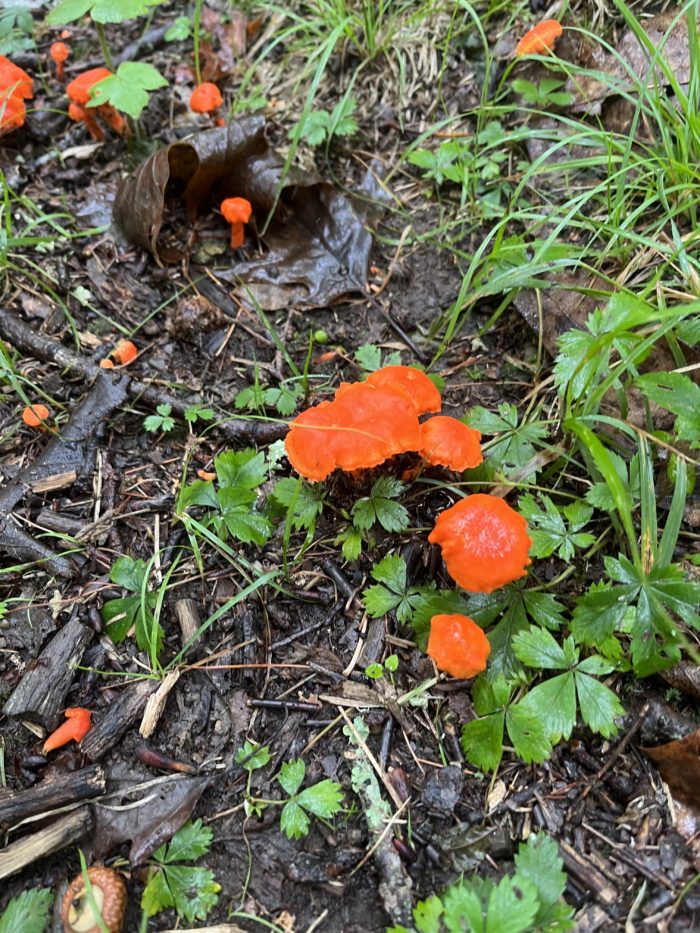 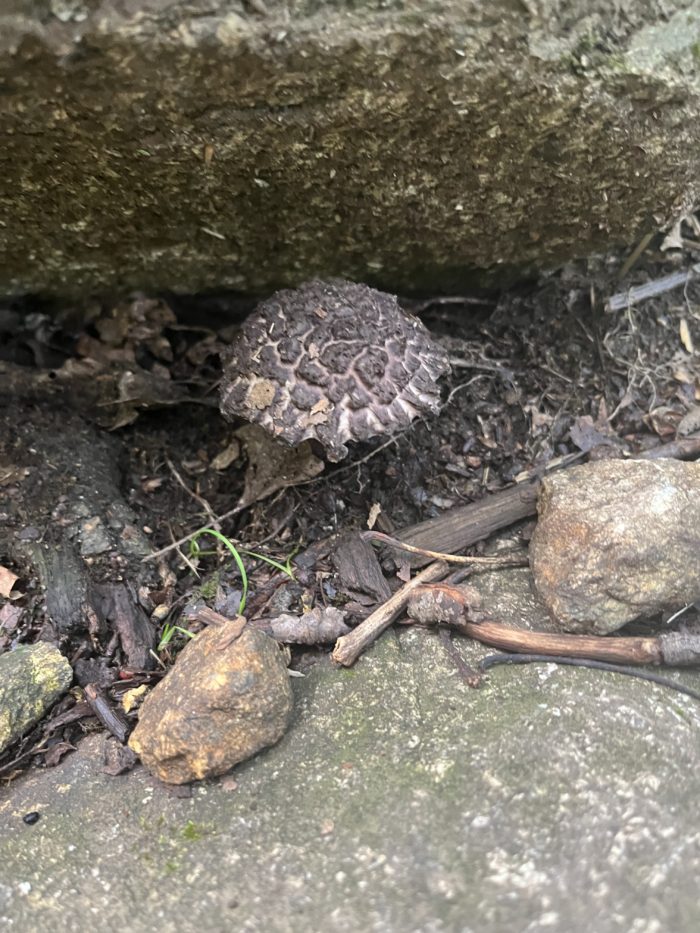 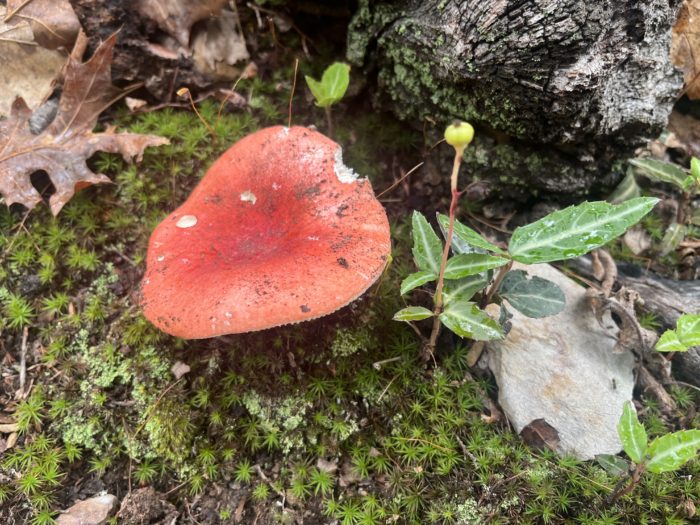 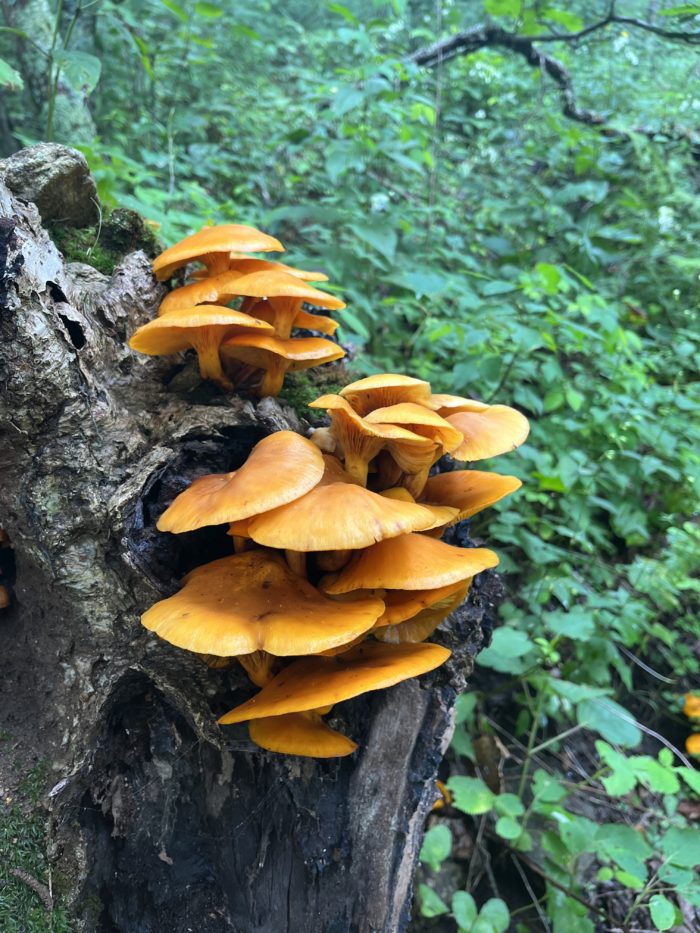 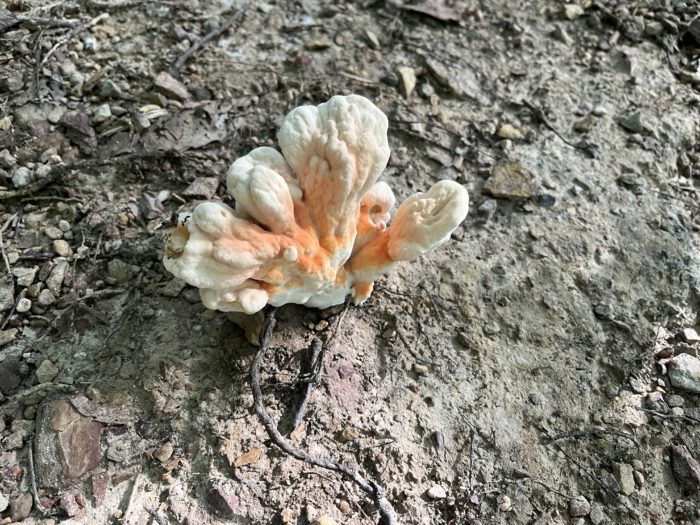 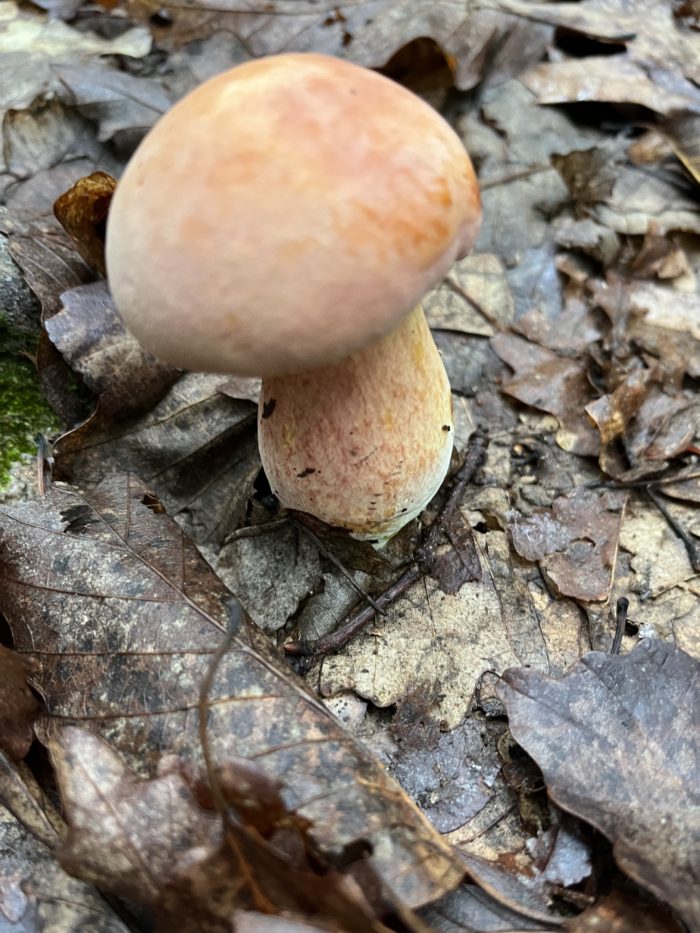 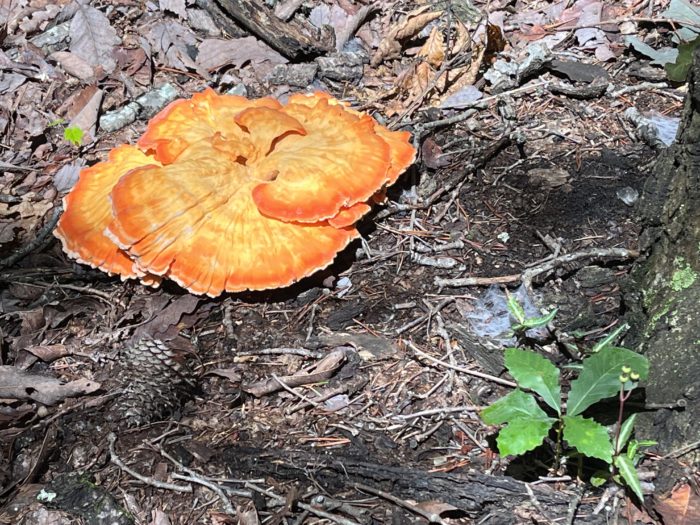 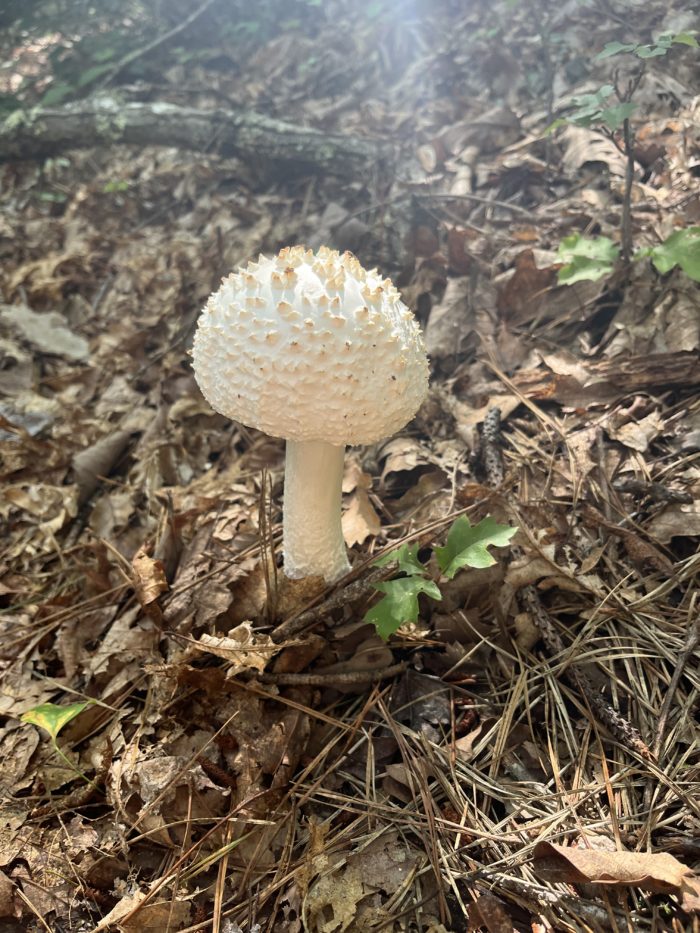 And how about this “fresh bagel” fungus? 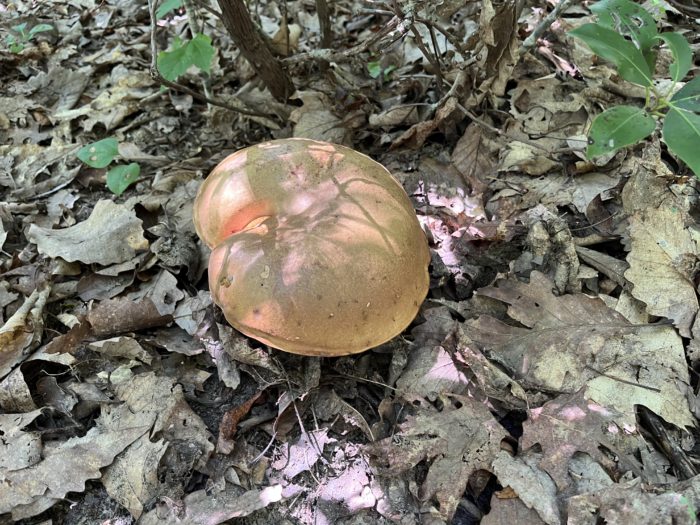 Or this absolutely massive one (my size 8 boot is provided as a reference).  Colossal! 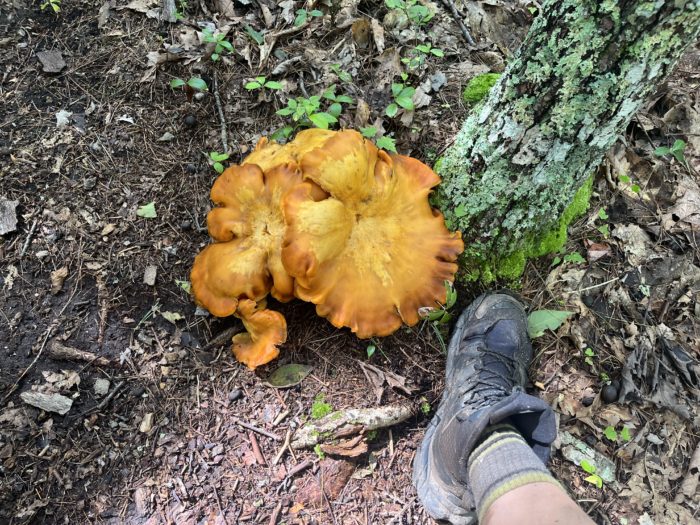 We’ve reached the end of this “Scary Movie”

And so, another blog piece wrapped up, I’ll leave you with a picture of a trail blaze.

Almost all trail blazes look the same, but doesn’t this one look like the Ghostface mask from Scream? 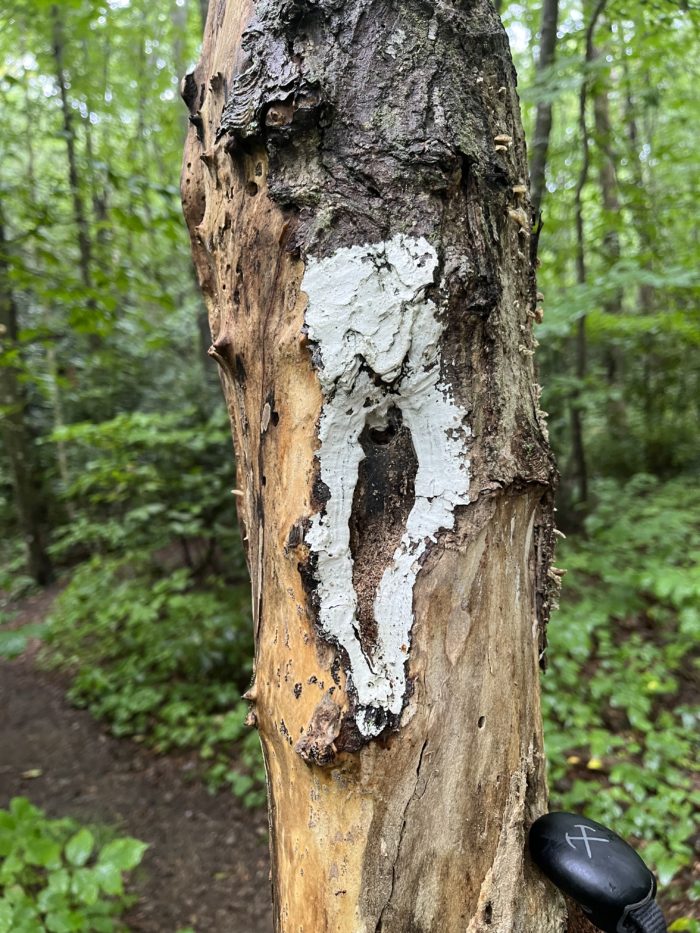 That’s all for now, friends ….