It had taken five weeks, but I’d finally reached the last miles of the AT in Virginia.  A zero day in Damascus awaited.  Here’s the detailed breakdown by day:

The Road to Damascus

I’d been looking forward to reaching the town of Damascus for well over a week now.  In scoping out my entire AT trek, I had marked Damascus as the endpoint of the third of the four big chunks of trail miles.  It’s also the last trail town in Virginia.

Biblically “the Road to Damascus” is where Saul, a feared persecutor of early Christians, had an incident with a flash of light and a voice from above which led to his conversion to become the Apostle Paul.  I wasn’t expecting anything quite that transformational — I really just wanted a day’s rest and then to depart Virginia after weeks of crummy weather.

The first couple of hiking days were essentially a slow, foggy descent out of the 5000+ foot Mount Rogers / Grayson Highlands area.  As a result, there weren’t many awesome views.  A couple of cows were curious as to who was wandering through their pasture: 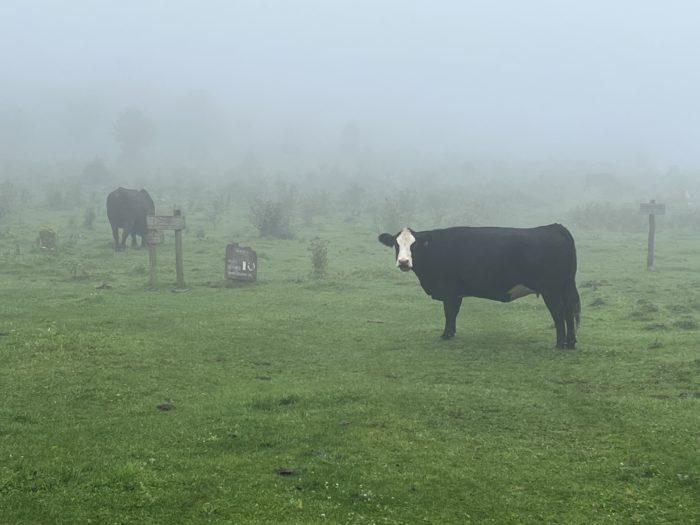 At various points in the Appalachian Trail, we devout followers of the white rectangle see our trail co-joined with another local trail.  The dual trail names will often be posted together.  (In fact, some states will actually double-blaze these sections.  It’s a bit mind-warping seeing a white AT blaze on the same tree as a blue “not the AT” blaze.)

On Day 124 in Virginia, the AT joined up with a local path known as the “Virginia Creeper Trail”. 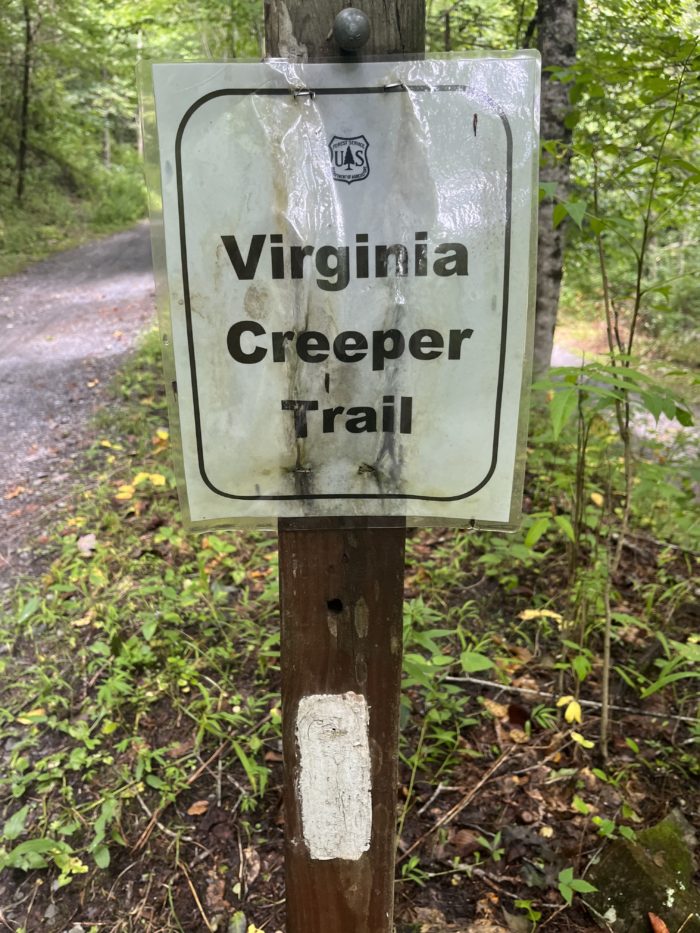 I personally found it fascinating that the state of Virginia has allocated a place for these unsavory individuals to make others incredibly uncomfortable out in nature’s fresh air!  Maybe it all falls in line with raising the bar on the general public’s health?  Got to be better for those folks to be outside than being cramped behind a basement computer, I guess.

For the record I was not “approached” in any way on the Creeper Trail; about all I saw were groups of bicycle riders having fun.  The trail itself is quite lengthy, running all the way into the town of Damascus itself: 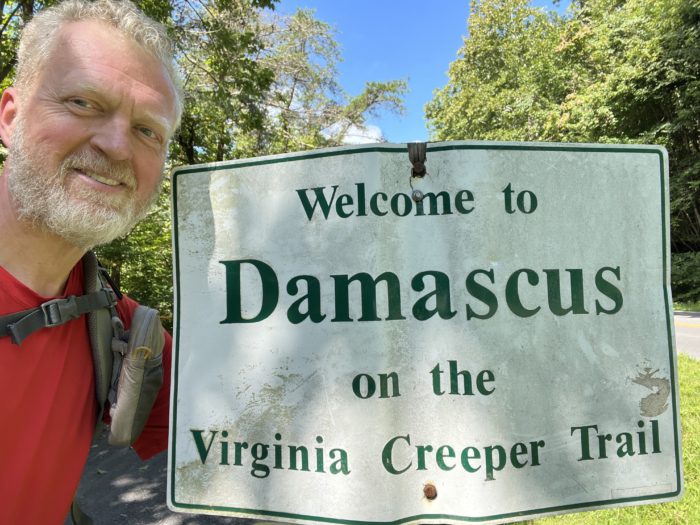 I really loved the setting of the Saunders Shelter outside Damascus.  Situated on an airy knoll, it had huge hammock-ready trees behind the structure. Both the sunset and the sunrise were openly visible from this spot.  I took a couple of pictures there as I packed up in the morning: 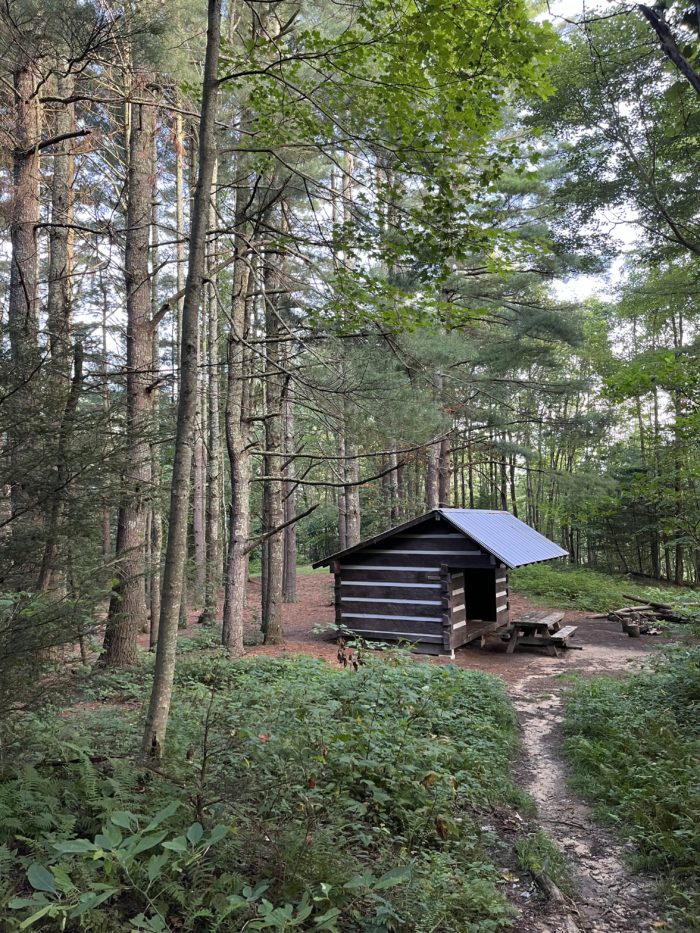 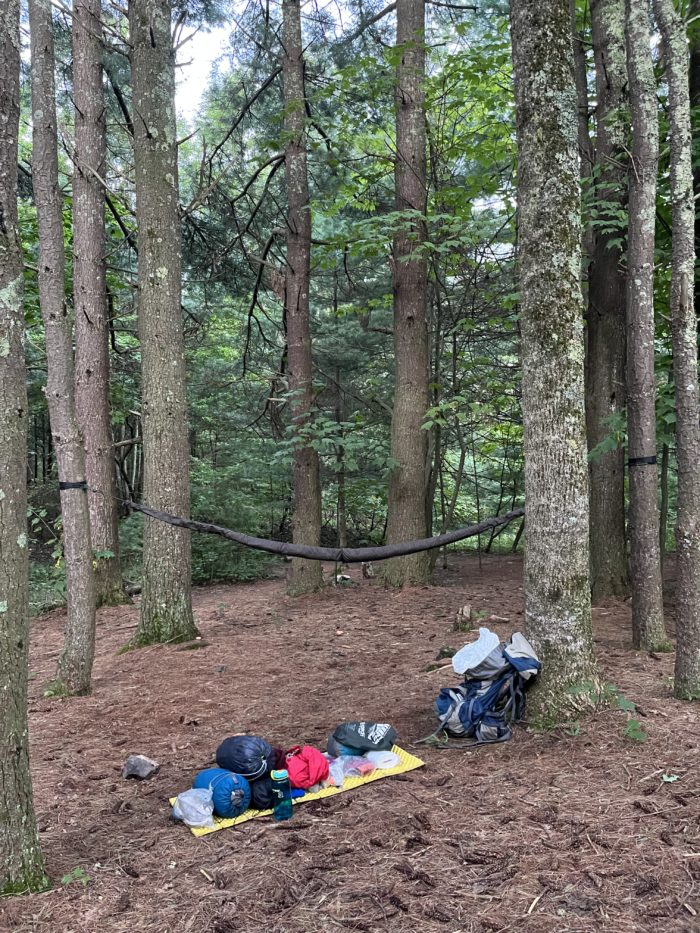 I had just a ten mile hike into Damascus that morning.   A short trip like this enables me to grab lunch in town around midday.  And I had my restaurant picked out in advance – the Wicked Chicken Winghouse and Tavern, right at the edge of town.  As I emerged from the trail onto Route 58 I spotted the restaurant but saw no activity.  It was closed (!!!) – the last day of a two-week shutdown, but would be open tomorrow.  (I’ve found these unexpected restaurant closures to be very common in these small towns in the South.)

So now what?  A short way up the street I found another local eatery, Mojo’s, and once inside I opted for a second breakfast.  It was fresh and delicious, and the surroundings were pretty cool! 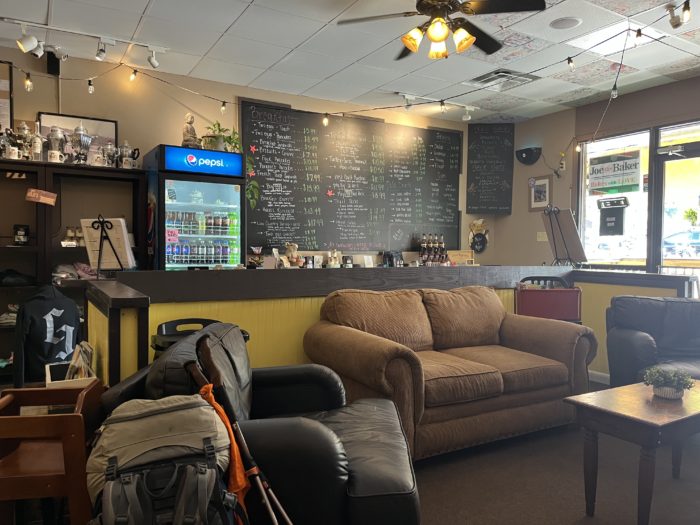 On to Lady Di’s

I then checked in at Lady Di’s Bed and Breakfast.  It’s a fairly new hostel on the trail – an old farmhouse renovated with some cool Victorian stylings: 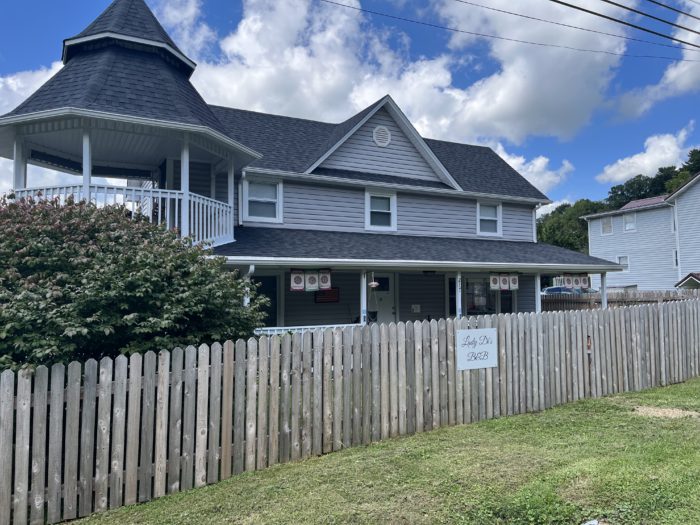 The owner, who thru-hiked the AT in 2019 after retiring at 64 years of age, has created a lovely respite for thru-hikers. I can’t say enough about how Lady Di welcomed me and ensured I had everything I needed during my stay.  I also really enjoyed the classic rock background music that she played as she cooked in her kitchen.  I could sing along to Supertramp as I climbed the stairs to the bunkroom!  And the homemade breakfast she provides is hiker-sized and incredibly delicious.  I loved the homemade sourdough toast!

Here’s a picture of her and her dog Duke on the front steps: 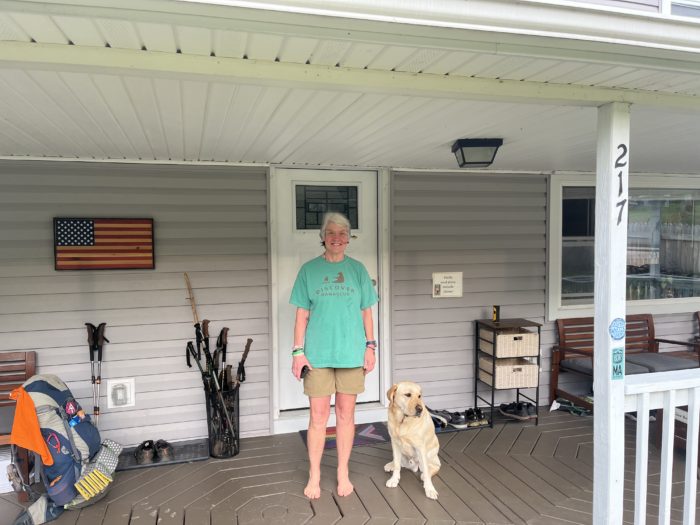 She even provided a bike and small pack so I could ride up to the Food Lion and resupply.  As part of the same trip I got my pizza fix at a local place in the same plaza.  Hey, that guy in the picture looks like he’s having fun! 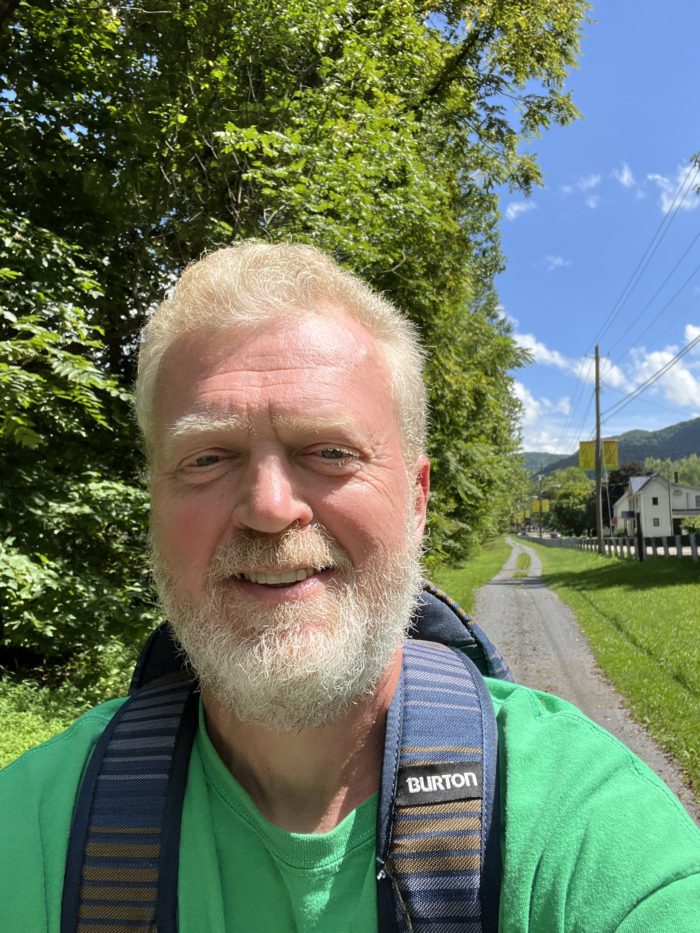 I spent a fair amount of time on my zero day up on the second floor turret at Lady Di’s, completing a couple of blog posts.  My thinking companion was Voodoo Ranger Juice Force IPA, which I found to be good but not great.  At 9% ABV I had expected more flavor. 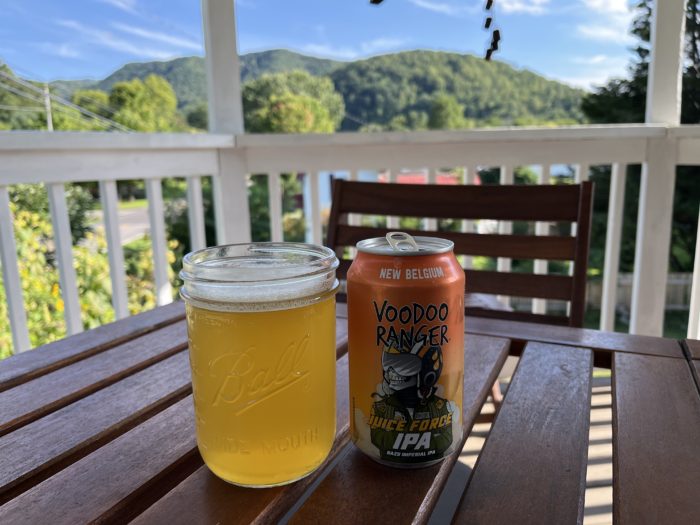 In the same turret location I got a first listen to the new Silversunpickups release, Physical Thrills.  Unfortunately, the tracks really just didn’t click with me.  It’s a bit surprising because they’d NEVER released a dud album.  I’ll need a couple more listens to fully judge it, but it seems they took a couple of steps back towards the electronic sound of Neck of the Woods.  I really prefer their guitar-driven sound.

My visit to the wings place also was time well spent, although the draft beer selection was so weak I went with a couple of $1 PBRs.

Before I knew it, I was on the trail again — and just over three miles from Damascus, I crossed the border into Tennessee! 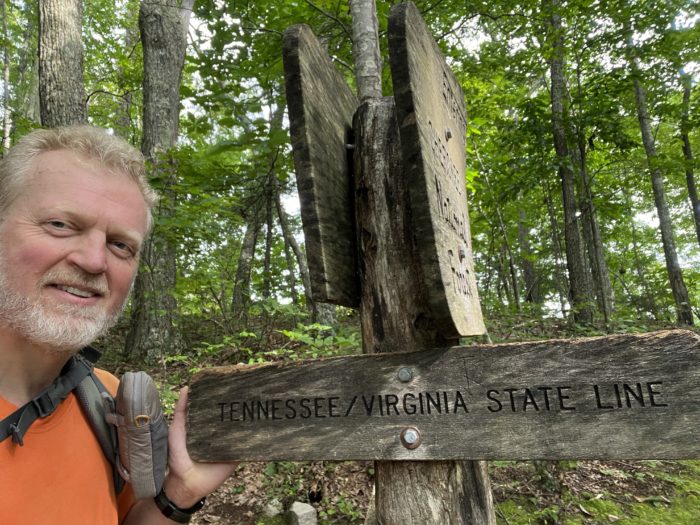 About a month ago I was really excited to meet Virginia. She just didn’t turn out to be as cool a chick as I thought she’d be.

Oh, she had her moments – but when we started our relationship with thirteen crummy days it was hard to recover from that hole.  Man, she really made me sweat early on!  I ended up drinking a lot every day.  Frankly some of her pets scared the crap out of me!  Oh, and the daily tears!  It must’ve been two straight weeks where there was at least one daily outburst!  I’d get soaked from my shoulders down to my feet sloshing through her trail puddles.  I couldn’t ever really get fully dry.

No I think it’s time we both just moved on to others.  There’s a really sweet gal named Georgia that I’m willing to walk a few hundred more miles to meet.  Maybe I’ll come back and see a bit of Virginia in the future, but right now I just need some time and some distance.

I’ll be sure to update all of you on what I find out there next on the AT!!