I’d visit a couple of the AT’s premier attractions during this four day stretch on the Tennessee/North Carolina border.  Here are the daily details:

Dodging rain out of Hot Springs

I’d take a much later than usual start to my hiking on Day 140, but I had good reasons:

Breakfast was good but not great at the Smoky Mountain Diner.  I had expected a bit more flavorful home fries. My big meal also included biscuits and gravy, something I’d never order as a main dish – but I was intrigued to sample it.  It tasted as I expected, like I was eating leftovers from the prior night’s chicken fried steak dinner, sans meat.  My last biscuits and gravy trial was back in the 1980s – the taste hadn’t improved for this Northerner in 30+ years!

When I finally got out on the trail close to 10 AM, heavy fog had rolled in and rain threatened.  About 90 minutes in the skies opened up.  I was less than a mile from a shelter, so I hustled through the muck to get under cover.  It took me 20 minutes to get under the shelter roof, where 2 day-hiking sisters were also waiting out the rain.  They graciously gave me some bottled water when I noted I was running low. I also got to watch the last twenty minutes of heavy rain rather than absorb it on the trail!

The forecast also predicted heavy afternoon thunderstorms; I’d have to keep moving along to beat those to my shelter.  The big 2100 foot climb over Bluff Mountain turned out to be a real grind.  Even though I was a bit hungry I decided to skip lunch to stay ahead of the incoming rain.

It would turn out to be exactly the right decision:  I got to Walnut Mountain Shelter and didn’t bother to set up my hammock because of the gusty wind and fog setting in.  Within 25 minutes, an epic thunderstorm let loose.  I watched all of it dry and happy from inside the shelter: 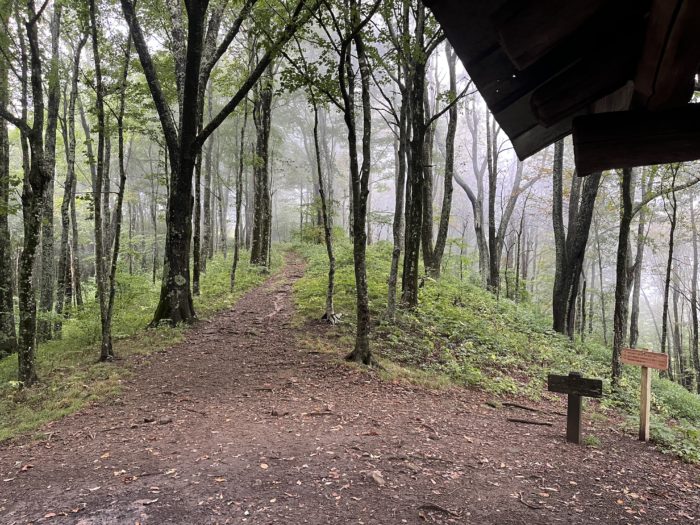 Walnut Mountain Shelter would turn out to be one of the most beautiful shelters I’d stay at so far on this trek.  Located on an open knoll just below a meadow summit, the shelter area was light-filled and airy.

Just look at the unique sunrise I caught the next morning- the rising sun appears to walk towards me up the trail! 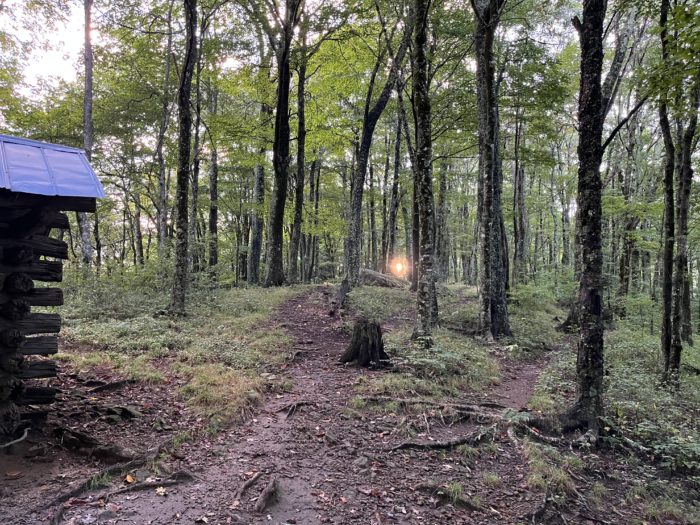 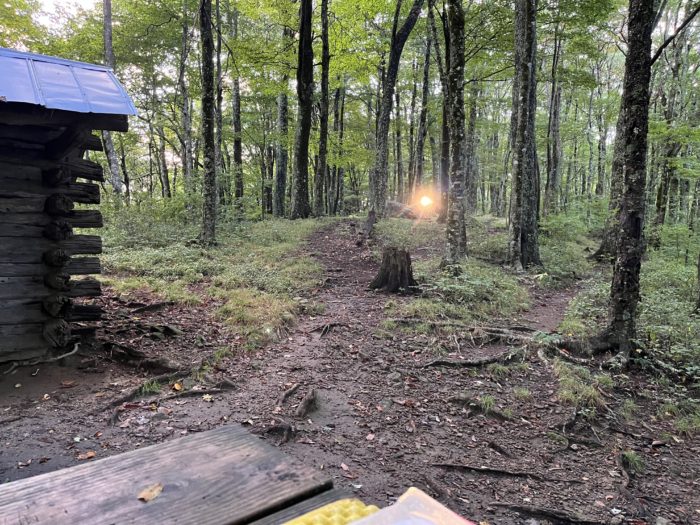 On Day 141 I’d cross over the top of Max Patch, one of the iconic spots on the southern AT.

Max Patch is a wide open mountaintop meadow.  Centrally located between the Roan Highlands and the Smokies, it typically offers fantastic views of both.

Unfortunately for me the morning fog from the prior day’s rain didn’t exit quickly enough.  I got nice views but they were shrouded in clouds: 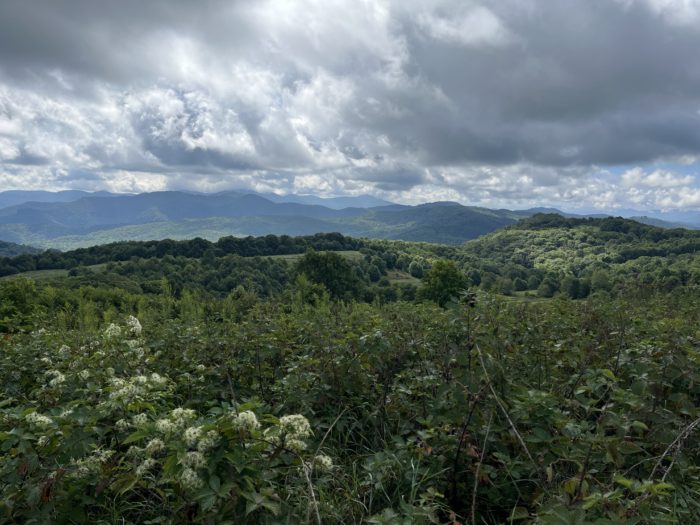 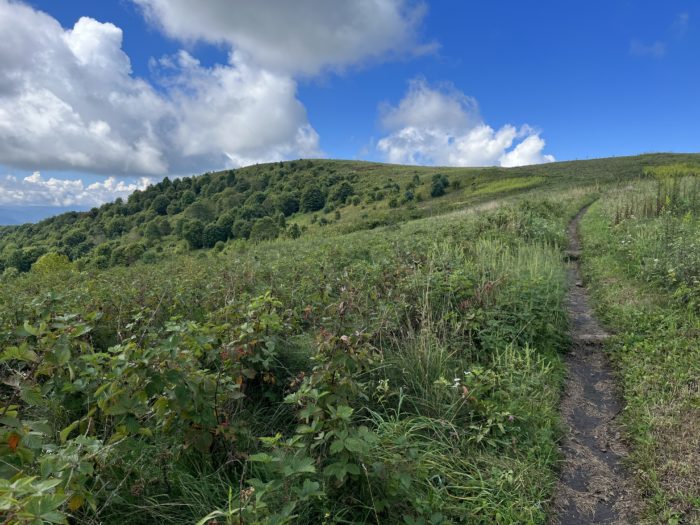 But my most awesome Max Patch moment occurred at the summit, where I encountered a young couple with two small children.

After a bit of conversation I learned that these two had completed an entire NOBO hike shortly after they married in 2017.  Their trail name:  the Honeymooners.  They asked if I needed anything and I said No, having just resupplied – and I was headed to Gatlinburg. At that point the young mom said “Do you have a shuttle? If not I’ll drive you there.”  Trail magic is real, people, and blessed are  those like Nico and Brad that offer it to total strangers.  A few days later she’d happily shuttle me down to town.

I’d continue on that day to Groundhog Creek Shelter, a fine resting point.  On the way I’d see an incredible spectacle:  a mama bear up nearly 60 feet in a tree to my left, and two cubs five to ten feet above her. I didn’t get pictures , but like I can’t shake the visual of those large animals so high up in that tree.

On Day 142 I’d cross over into Great Smoky Mountains National Park, a long-awaited event.  Two key things about the Smokies:

These two factors do not blend nicely together in a delicious Reese’s mix of good results.  It seems to me that the Great Smoky Park Rangers spend most of their time addressing bear issues.  Bear warnings and restrictions, including closure of shelters, are frequently given.  But the mountains in the park are tall and scenic.

I’d enter the Park at Davenport Gap, a long way down from my prior night’s shelter, then immediately climb 3000+ feet up to the high ridge.  My lunch stop at Davenport Gap Shelter didn’t alleviate bear concerns – the front of the shelter was actually chain link fenced for protection from bears!  I’d never seen anything like that before.

I summited the breezy ridge and chose to take the 0.6 mile spur trail to Mt Cammerer, which promised great views from its lookout tower: 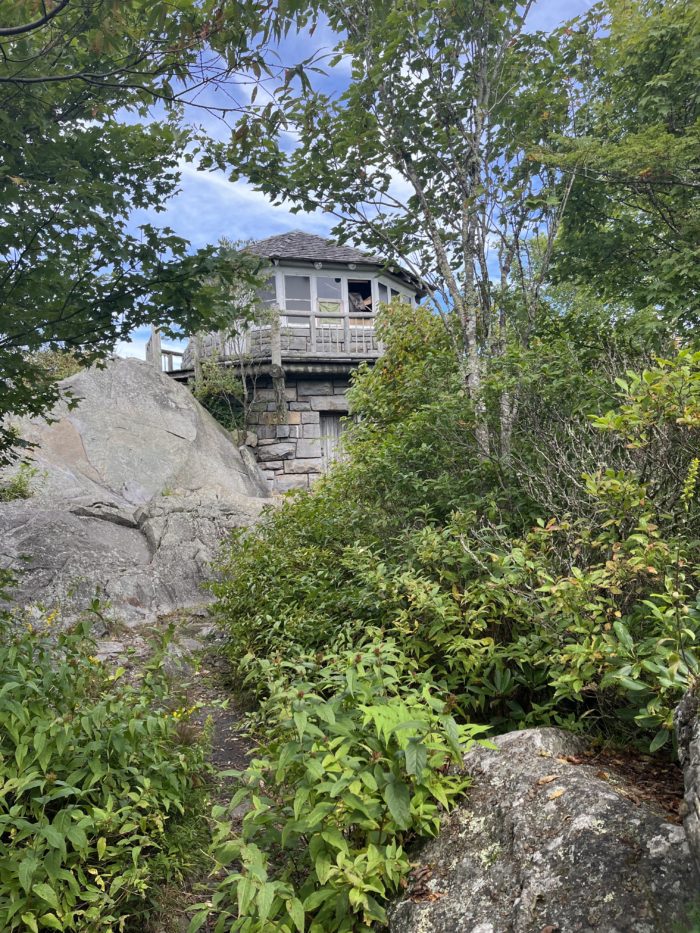 The peak delivered, and I’d be glad I made that choice – for I’d have no views at all from the ridge for the next two days. Here’s the almost limitless view from the peak: 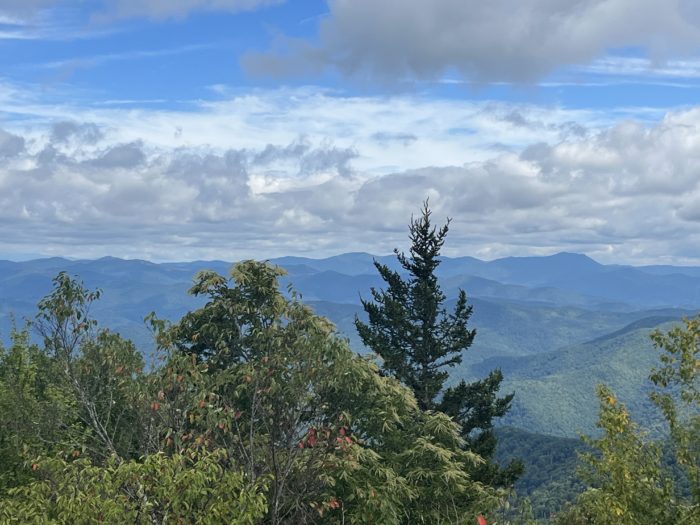 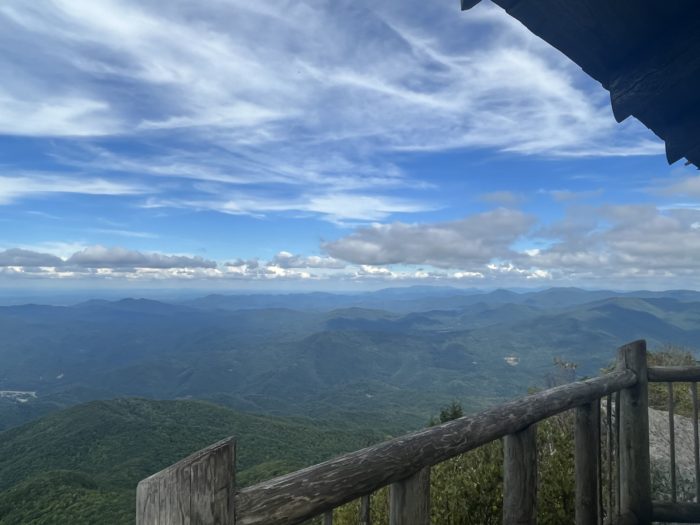 Rain would move in after midnight for a long stretch.  I’d actually sleep in shelters for two straight nights (National Park restrictions due to … bears, of course) rather than in my hammock. It was a bit uncomfortable but I got by.

Losing stuff on the trail

I’d seen comments posted like these on the Far Out App for the last 1900 miles:

I left my (iPhone/charger/stove/sleeping bag/air mattress) at (Somewhere) Shelter last night.  If you find it, please call or text me at (number)!

People lose stuff. It’s human nature. But on the trail every piece of gear that you carry is so vital, one lost piece can be crippling.  I’d been fortunate thus far that my only lost gear was my blaze bandanna, dislodged somewhere in the Virginia woods. I frequently reflected that I’d had great luck in not losing a major piece of gear.  But there’s a first time for everything…

In departing Cosby Knob Shelter on Day 143, things were a bit more chaotic than usual.  For one, I’d slept in the shelter itself rather than my hammock – so my pack up routine was much different than usual.  For another, the late arriving hikers from the prior night were chatting a bit as I gathered my stuff.  It all added up to me storing my Nalgene water bottle on the wrong side of my pack – in a pocket with a sizable hole.

So it occurred that two miles into that cool foggy morning I reached back to find my cook gear in the wrong side pocket.  The other pocket was empty!?! I immediately decided to try to find my green water bottle.  Hopefully it had just fallen out in the last mile. Although I carry two additional water bags I only had a few ounces in them.

I dropped my pack at a nearby trail junction and took off on a half jog with just my poles.  I concentrated on the right side of the trail NOBO as it was likely the bottle had dropped off that trail edge.  No luck after retracing the entire two miles to the shelter spur. I even went back to the shelter itself to check – no dice.

My return up the trail offered a second chance to spot it.  Surely it had dropped off trail, and I’d have to be laser focused on the left side SOBO.  About a mile up I spotted a yellow ring about six feet down in grass.  The top of my bottle! 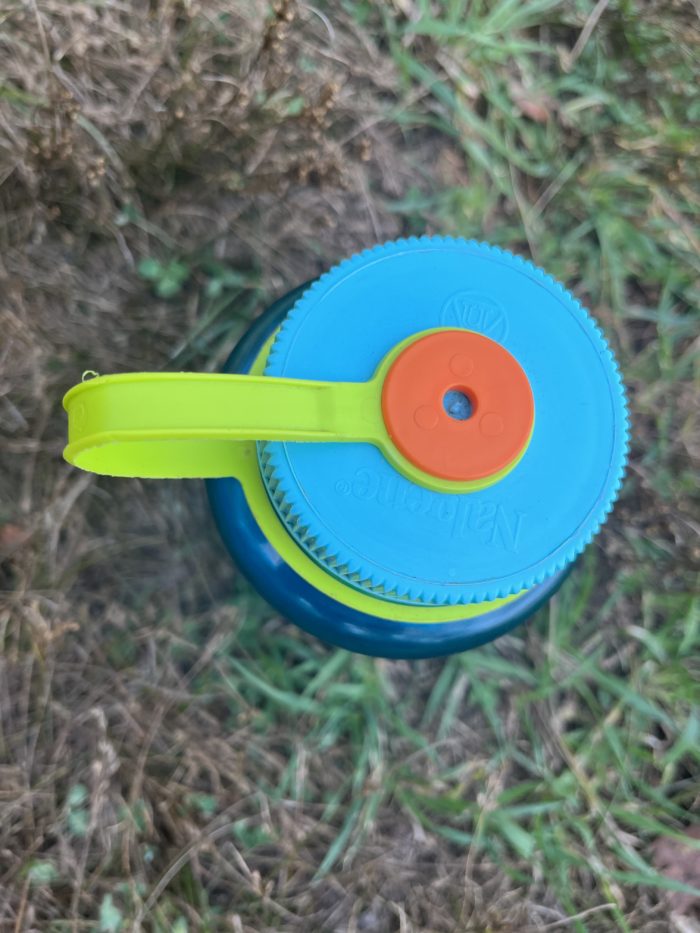 Ironically, when buying this bottle I wanted all green but settled for one with a yellow band and orange cap.  Those colors saved me!

Relief washed over me until I realized I’d left my pack with a full food bag unattended in the bear-filled Smokies!  Bears had been known to carry off entire packs with food in them.  I rushed across the trail again to find that all was good.  Crisis averted!

Rain and fog do not make great photos

I’d love to share more photos, but honestly the ones from the last two days of this stretch all look like this: 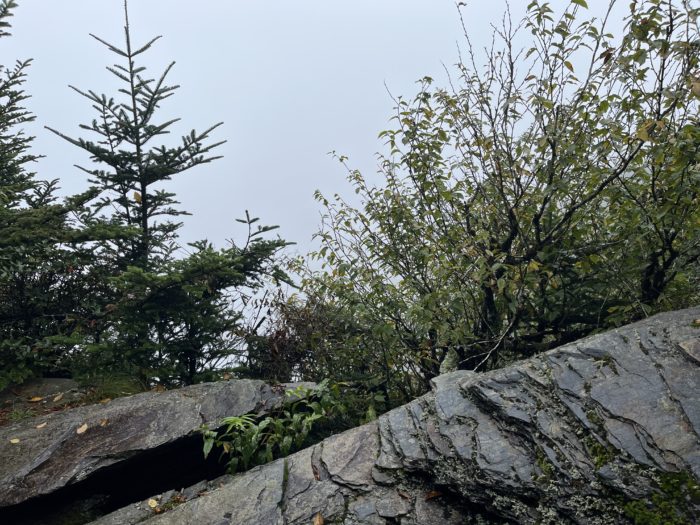 I’d need this rainy weather to clear out if I was going to see anything more from the remainder of my AT miles through the Smokies.