After a resupply visit to Gatlinburg, Tennessee, a huge change in the weather led to enjoyable days in Great Smoky National Park.  Here are the daily details:

A wet journey to Newfound Gap

When I awoke a bit sore and uncomfortable inside Perk’s Corner Shelter on Day 144, I realized rain had falling virtually nonstop for the last 24 hours.

The constant precipitation had taken a toll on the trail conditions.  I was now not only fogged and rained out of every view on the ridge, I also battled streams running right down the trail: 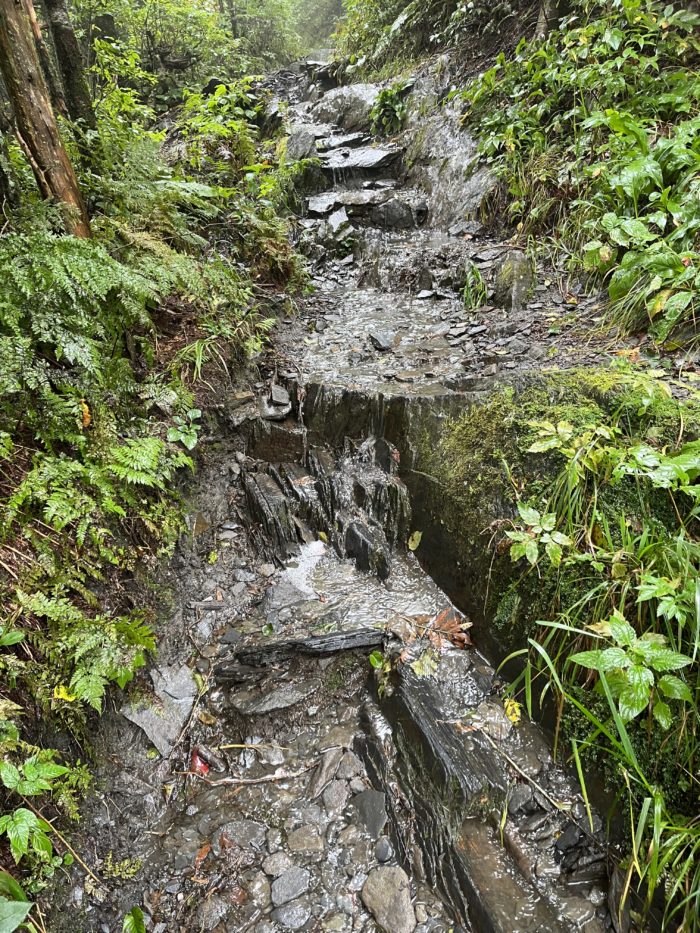 I’d slog out ten miles that morning to Newfound Gap where Nico, that wonderful trail magic donor on Max Patch, would shuttle me into Gatlinburg.  But wait!  Before I’d get to the parking lot I’d strike up a conversation with a section hiker named Shocktop, and she’d recognize me as a Trek blogger.  That was way cool, and I asked for a photo of another hiker-reader on the spot.  Good luck, Shocktop! 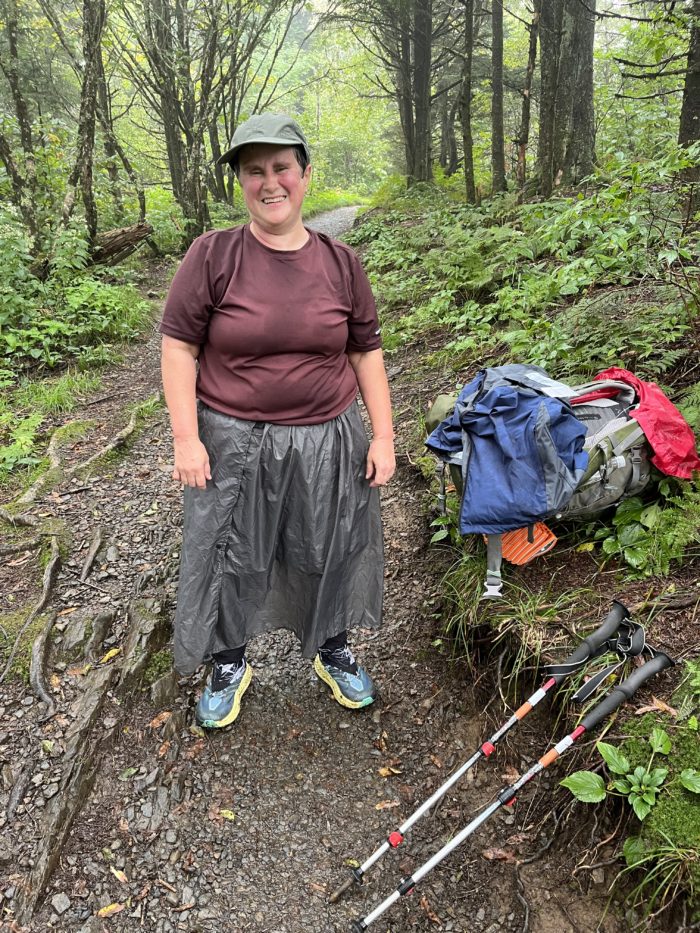 When I arrived at crowded Newfound Gap, my personal shuttle driver Nico greeted me with two orange juices, two craft beers, and home-baked goodies to enjoy!  It was trail magic heaven!  I’d down one OJ immediately, but I still had a bounty to enjoy at my motel: 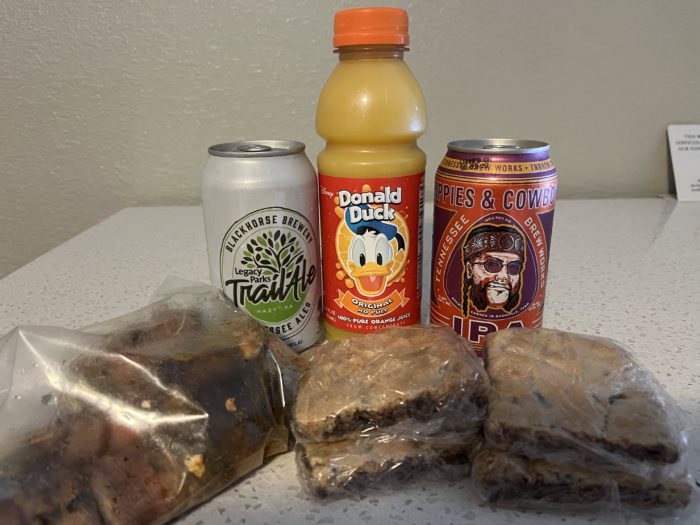 Thanks again, Nico and Brad – you guys are awesome! After all of your goodwill, I really want to pay it forward to the next thru-hikers!

Gatlinburg- Alternate Universe to the AT

Wow – how do I even begin to describe the tourist magnet that is Gatlinburg Tennessee?

To me, it showed itself to be a mix of the following:

And it’s all dropped into a rugged mountain setting in the South.

Walking along the main strip you’re assaulted by non-stop food and entertainment options.  Lemonade? Axe Throwing? Mini-Golf? Ripley’s Believe It or Not? All mere steps away.  Free trolleys run up and down the street to get tourists site to site.

But it’s even worse than that.  I found that the town’s pedestrian artery was clogged full with top-heavy people who sported legs that seemed wholly unfit to support them.  Cross that with a never-ending boulevard of wine-tasting and moonshine-tasting joints, and NOW you’ve got serious sidewalk navigation issues.

I found traversing the Weeble-filled walkways of this bizarre place frustrating beyond belief.  It was MUCH easier to conquer wet roots and rocks on the AT than it was to figure out which way Jesper and his wife were going to move at the next stop light!

As a result, I braved the streets solely to find a laundromat to get my clothes clean then promptly hid inside my motel room and watched NFL football.  With beer, of course.  I’d sample:

All were good.  The Blackhorse IPA was a solid 4.0 out of 5, but the Atomic Torpedo was also surprisingly tasty!  I’ve long been a Sierra Nevada fan, and I respect that they can still put out very tasty beer even as a mass-market brewer! 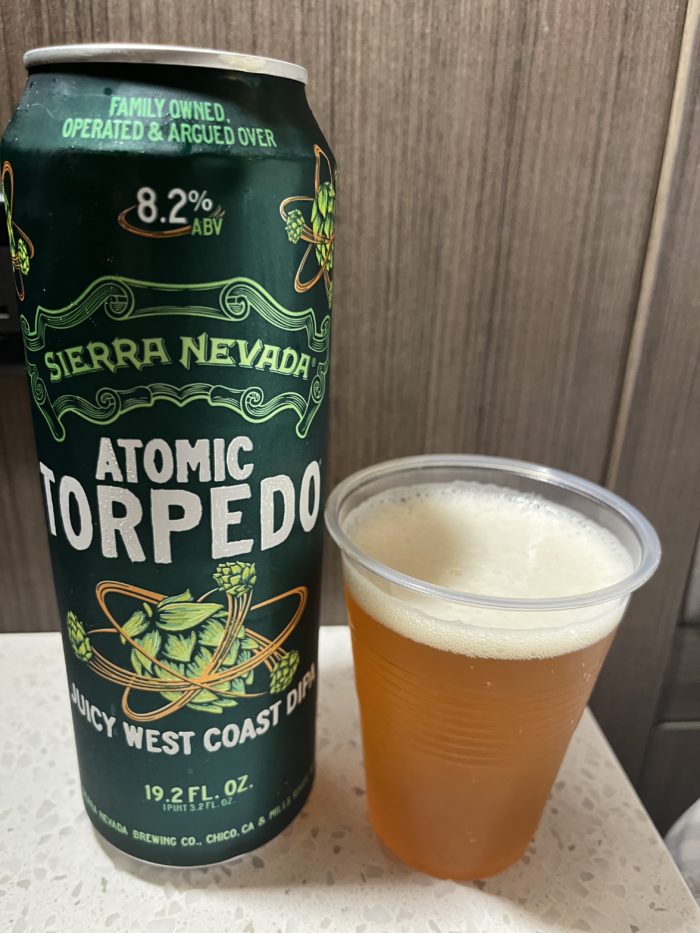 The above rant is not meant to imply that my town trip was a wasted effort.  Far from it – in addition to a solid resupply at Walgreens (yeah, I didn’t believe it was possible until I did it), I had a great zero day breakfast at Crockett’s Breakfast Camp. 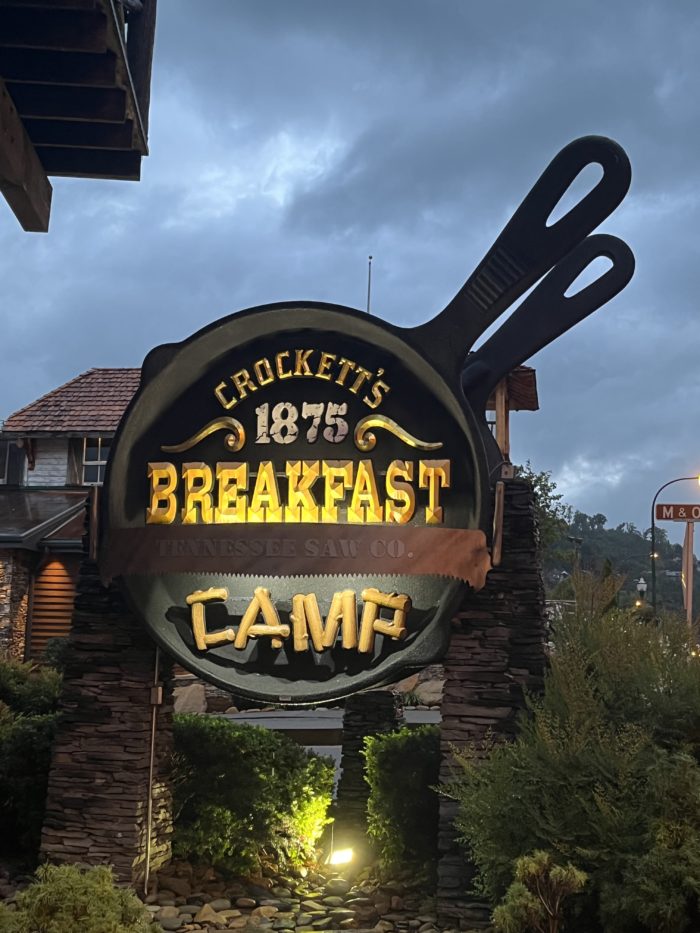 Think about this people, it’s not just a breakfast restaurant but a CAMP – a way of life for those who value coffee and eggs before the 9 AM hour.  Professionals at their craft!  And like any valued professionals they charged premium prices!  It was a great breakfast, but I’d leave $28 poorer as a result.  I think it’s all part of the Gatlinburg experience.

I also had to visit the NOC Outpost and get some new boots.  I really really tried to make my third pair of Hoka Anacapa boots last to the very end.  But after 900 miles, the recent rains caused them to start disintegrating on the trail.  Unable to find any Hokas in my size, I opted for a North Face boot.  Old and new are shown below: 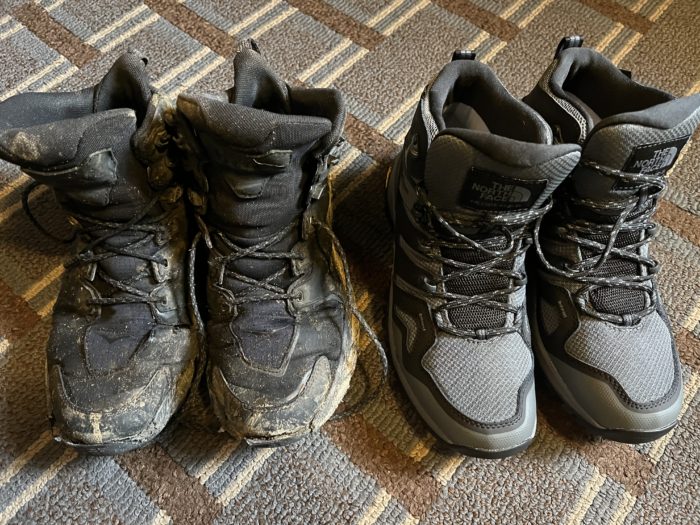 Thrilled to be chilled!

As my shuttle driver Mark  brought me out of Gatlinburg up to Newfound Gap on the morning of Day 146, it was apparent that the weather had shifted.  A stiff cold breeze greeted me as I pulled my pack out of his hatchback and headed into the woods.  My typical hiking MO is that I’m taking off layers within 30 minutes of a morning start.  Here as I climbed towards the 6000 foot level, I stopped to put my alpaca hoodie on to stay warm in the sunless forest.  It felt like someone had flipped a switch to autumn weather, and it felt awesome!

The air was cool, crisp, and delicious on the high ridge, even getting a bit chilly as I worked my way towards Clingman’s Dome, the highest point on the AT at over 6600 feet.  I’d pass a wealth of day and overnight hikers on the trail- it was as if the new weather had also unloaded eager hikers!

The summit of Clingman’s Dome, like many of the peaks in the Smokies, is heavily wooded with evergreens.  But a futuristic observation tower offers great views in all directions: 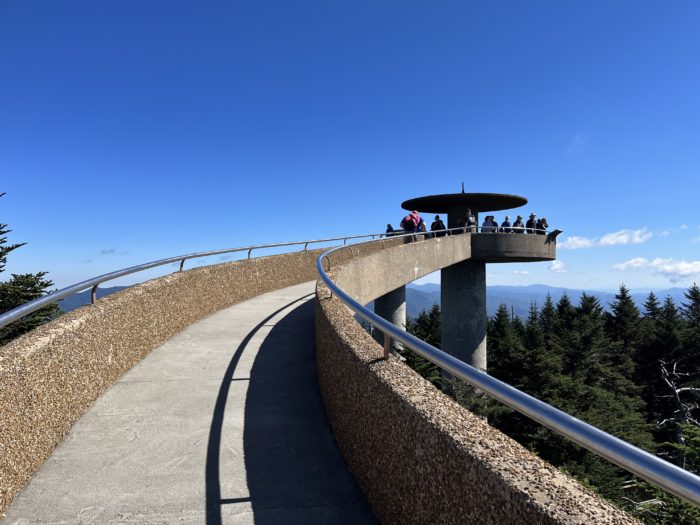 Access to this tower is surprisingly easy for a non-hiker, as a parking lot sits about a quarter of a mile below the summit.  When I reached the top of this structure about forty people were there, and I was one of just two people with a pack.  I took a couple of pictures and moved on, a bit of an anti-climactic moment for hiking to the AT’s high point. 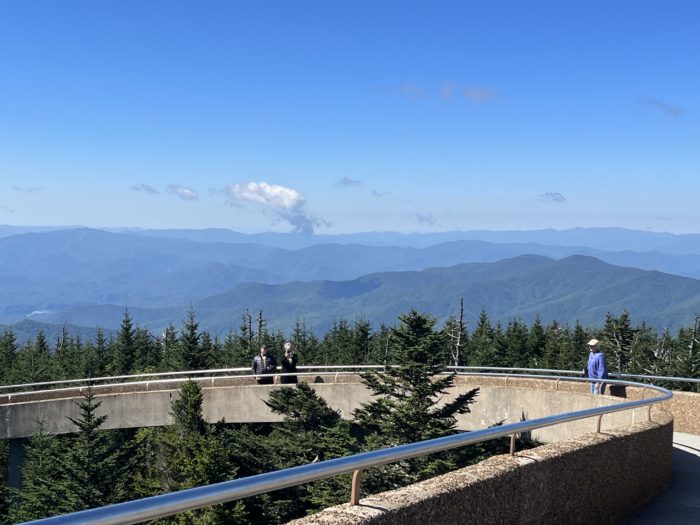 I’d actually find that the views from the ridge south of Clingman’s Dome were even a bit nicer: 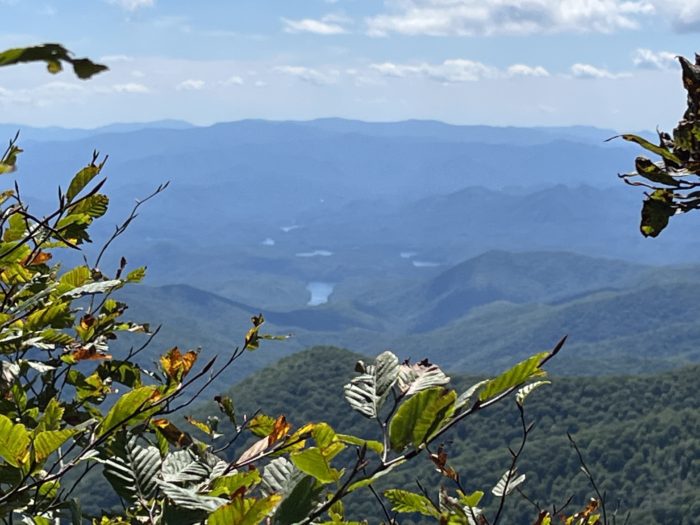 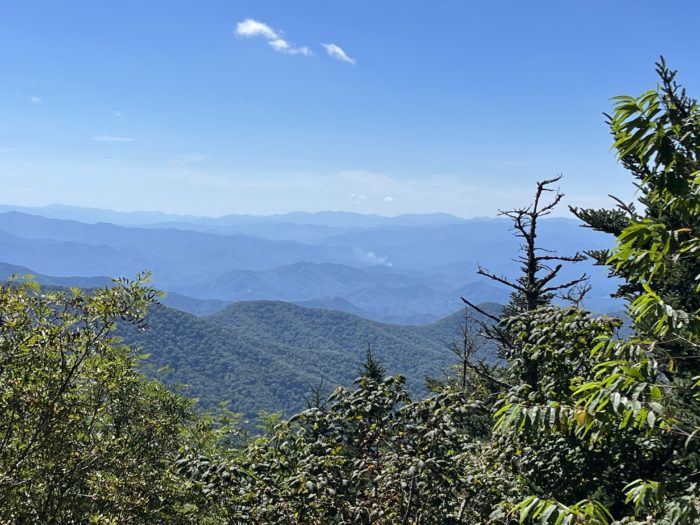 I’d complete a 17 mile day to arrive at Derek Knob, overjoyed to be able to sleep in my hammock there, and without a tarp as the rain threat was nearly zero!

You faithful blog readers will likely recall how I was seriously freaked out by falling tree nuts in the early days of Virginia.  At the time I though they were beechnuts, but at least two knowledgeable blog readers corrected me – they were hickory nuts exploding off logs and metal roofs.

Well the fall weather also set into motion the launch of acorns, chestnuts, and some other heavy nut that looks like it’s wrapped in a fruit skin.  These things let loose at Derek Knob, creating unbelievably loud blasts on the shelter roof, including three in a row between 5:00 and 5:10 AM. So much for needing to set an alarm!  Morning conversations amongst the shelter dwellers indicated that everyone was woken up by the incoming nuts!

Day 147 was a relatively short 12 mile day to Mollies Ridge Shelter.  I’d have preferred to go a bit further, but the Forest Service had closed the campsite four miles further on due to – you guessed it – bear issues.

But this 12 mile stretch would turn out to be fairly rugged for me.  In fact, I’d average less than my usual two miles per hour during the difficult 4.3 mile ascent of Hurricane Mountain.

Nonetheless, it’s hard to put into words how the instant weather shift changed the paradigm.   No longer soaked, slogging through trail puddles, and blinded by fog I could finally enjoy the beauty of the Smokies minute by minute.  And there was certainly a lot of beauty to enjoy! 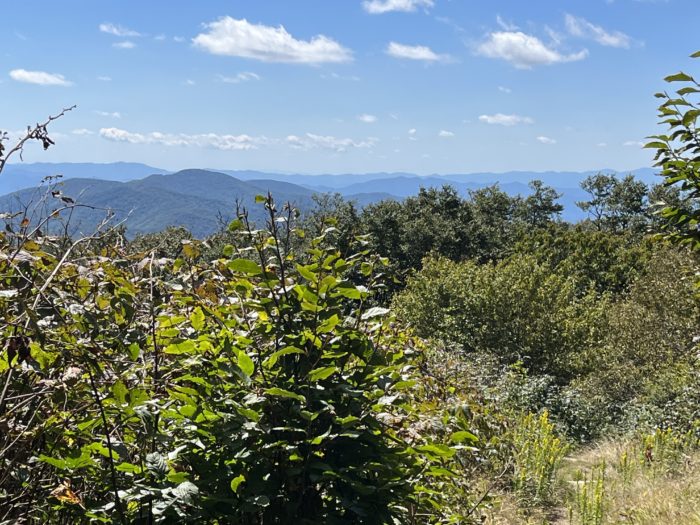 In another day I’d be departing the Park, but certainly the sights of the last two days would stay with me for quite awhile!