I’d really enjoy this stretch of the New Jersey and New York AT.  The wide spectrum of sights and eco-settings really made these days special. Here’s the summary of my travels:

Beauty on the trail

I awoke at Brink Road Shelter on Day 24 to the beautiful serenade of a hermit thrush above my hammock.  I’d never visited a location where hermit thrushes were so vocal and visible.  Add in a wide assortment of other beautifully vocal birds, and it made for a great place to stay.  As I filled up my water bottle at the crystal clear spring, I spotted an orange eft – which is apparently a juvenile version of the eastern newt – also dropping in for a morning drink.  I’d see a total of three of these tiny creatures that day (definitely my MMM – Most Memorable Moment), and would also see some on the two following days. 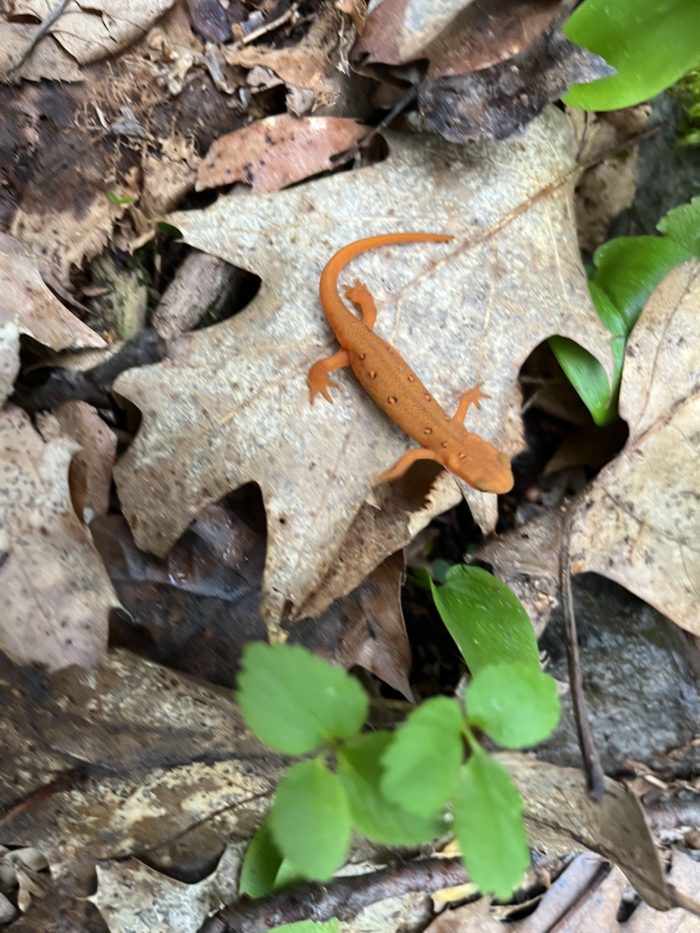 The hike that day was incredibly enjoyable as well, as I continued to see beauty here that Pennsylvania lacked:

All of this added a great deal of character to my surroundings.  The day ended with an ascent of New Jersey’s tallest peak, High Point.   There’s a Washington Monument like structure on the top, as you can see in the photo below: 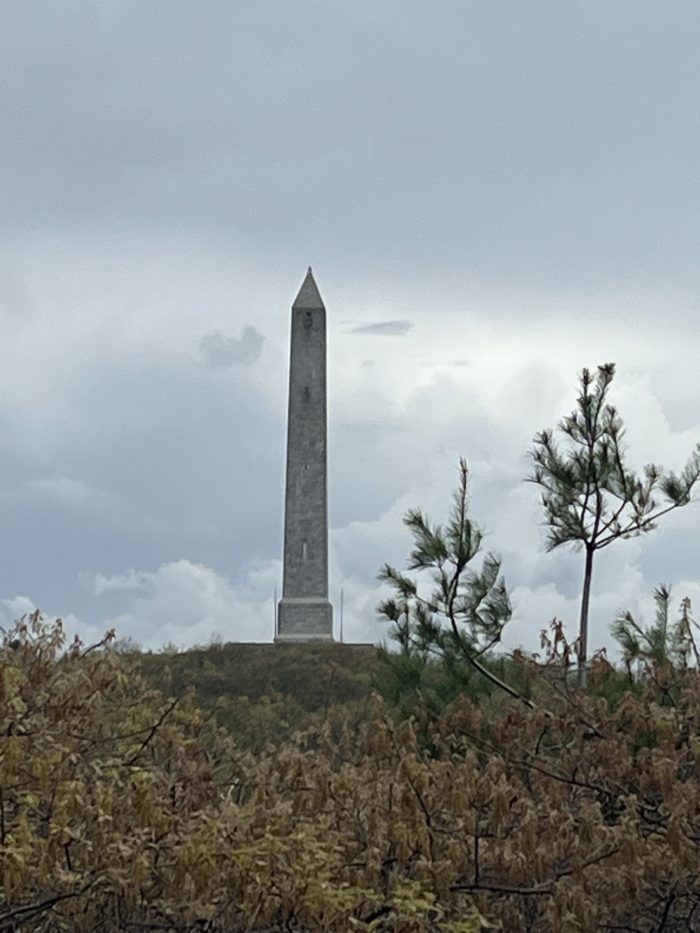 Through this blog I try  to share with you, dear reader, where I’ve hiked and the major things that I saw or felt.  But sometimes when I re-read one of my published posts, I feel I’ve failed you.  For so much of the magic of this 2,000+ mile, multi-month trek is the daily journey itself.  It’s the thousand little things that happen during ten or so hours of hiking.  Those things that “don’t end up in the box score” – to steal some baseball jargon.

On the trail, thru-hikers are asked all the time:  “Where are you headed?”  The standard answer for NOBOs is “Maine” – but it’s not really the truth.  A thru-hiker is headed around the next turn, over the next ridge, or on to the next mile.  The journey is the destination, as they say.

So I’d like to share this perspective with you from a six mile stretch of trail on Day 25. The map showed a mostly downhill route to Unionville, New York, where a number of us would resupply in town.  Rain had fallen the night before, ending at about 4 A.M.  The woods were damp and cool, but not drenched.

Shortly after I departed camp, I roused a white tailed deer from a nearby thicket.  It bounced away quickly to my right.  The forest landscape started as deciduous, as you see below.  The smell of wet leaves saturated the cool air. 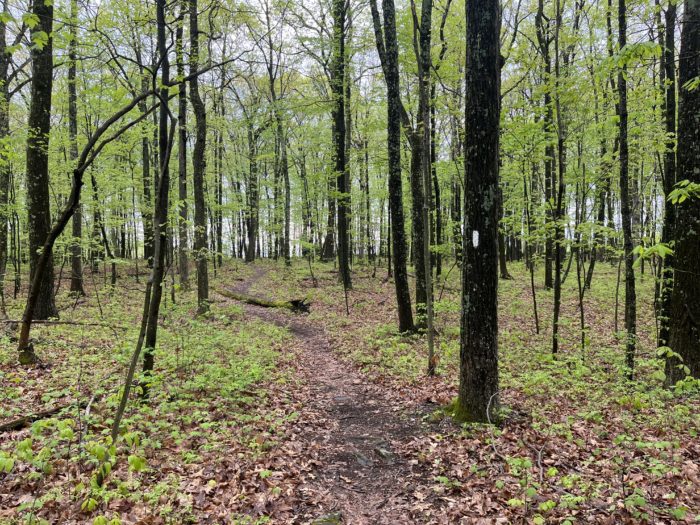 This landscape soon gave way to a stand of evergreens.  It’s wonderful to hike through a long section of evergreens!  The dense shade provides a super cooling effect, and the needles form a plush carpet underneath your feet.  The aromatic scent just exudes comfort and safety.  As I continued downhill, the trail opened up to beautiful meadows and fields.  In addition to constant bird song, I now heard grasshoppers buzzing in the the wet high grass.  The same grass washed across my shins on every step.  As you can see, the trail hugged the right side of this meadow, offering morning views of the ridge to the left. 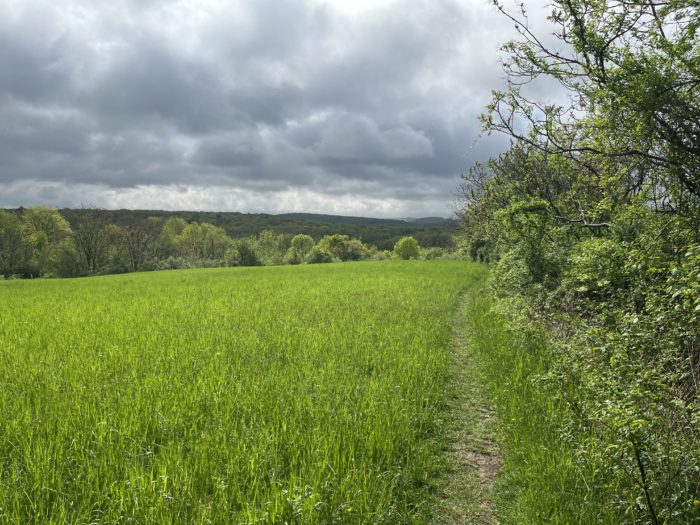 The trail continued to wind around a small pond with multiple frogs making that “rubber band” frog noise.  The lillypads close to me bubbled and moved with the unseen animal life lurking underneath. 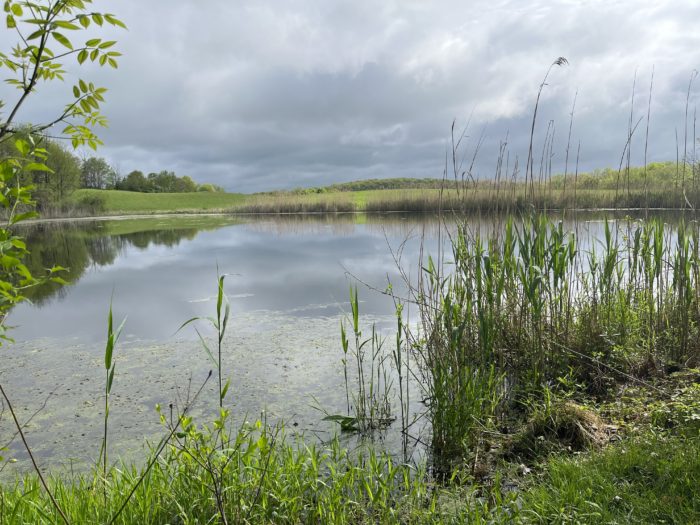 As the trail left the pond, a marshy section appeared with dual-board footbridges to help hikers cross.  Last night’s rain had covered some of the sections, and caused me to gently splash my way through a number of the bridges.  Around a trail turn a farmhouse soon appeared across a wide pasture, a scene just begging to be painted. 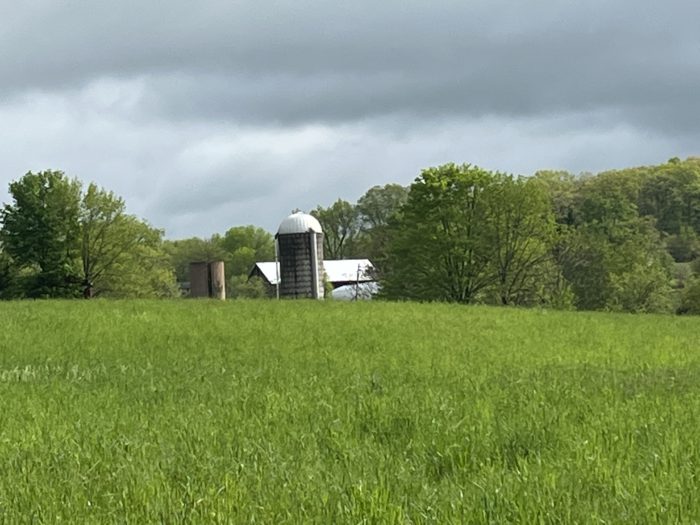 All that in about six miles of a trail day!  Anybody grabbing their boots now?

After packing away our new food purchases from Hohler’s General Store, Terrapin and I headed to Wit’s End Tavern for a couple of cold beers.  So special to get a beer on the trail!  But I had a grander plan in mind:  I continued a half-mile north on the trail, and at the next road crossing I walked a half-mile south across the New Jersey border to Skyland’s Craft Beer.  Their draft beer chalkboard was a beautiful sight to my eyes! 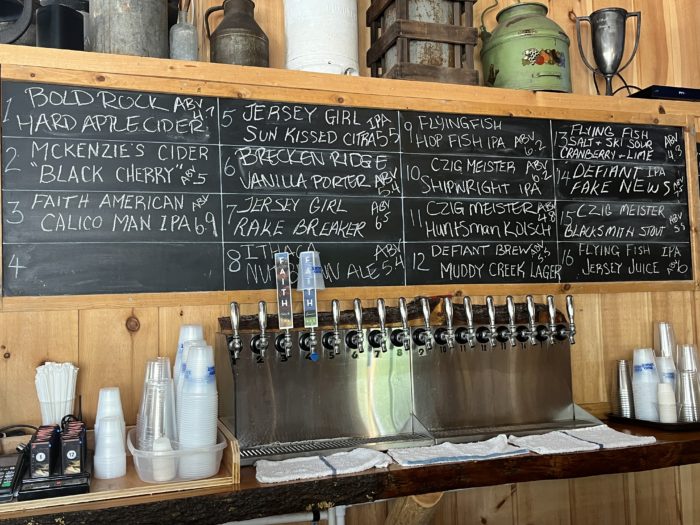 I relished the chance to sample a number of IPAs.  The classic rock blasted away inside – but when “Gimme Shelter” by the Stones came on, I figured it was my queue to leave (haha).  On the way home I found those wooden plank bridges to be much more difficult to navigate than usual …hmmm.

The Day 26 forecast brought substantial anxiety amongst a number of us moving in a NOBO pack: Cosmo, Terrapin, Lost Man, Big Easy and myself.  Heavy rain was expected at 3pm and no one wanted to be on the trail then.  So varied strategies emerged, with many heading off trail for the night.  I decided to hike just twelve miles and shelter early for the day.

The morning was steamy and uncomfortable.  The trail headed downward to a wide swath of marshes crossed by a wide boardwalk.  Red-winged blackbirds and turtles were in abundance here amongst the tall reeds: 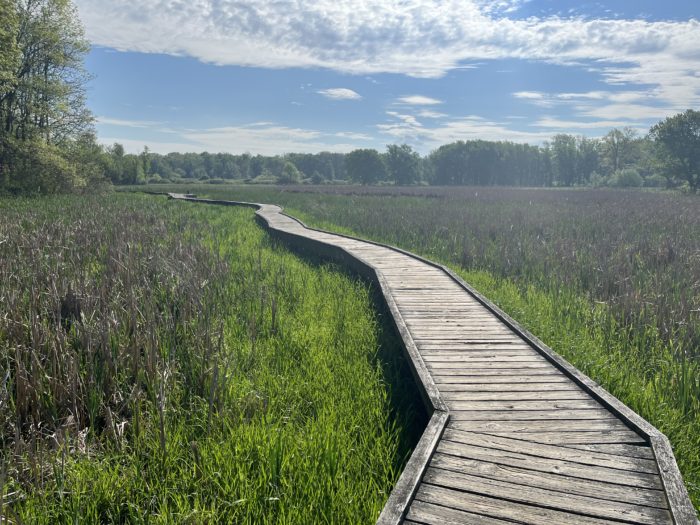 As I left the marsh boardwalks I knew I’d face a tough climb up to the ridge. It wasn’t going to be fun as I was loaded up with four days of food in my pack.  About half way up the steep boulder-filled climb I stopped for a water break (in both directions).  Just as I finished part one, a woman appeared below me steadily ascending. I greeted her and she simply smiled back and continued on her way – strangely enough, without a pack or even a water bottle. I’d guess she was in her late forties, though her denim vest and tie-dye hair ribbon made her look younger.  As she passed I spent some extra time with my water bottle to give her some hiking space.

The rest of that steep ascent was fascinating. The woman climbed that boulder-strewn pitch steadily and effortlessly, often with both hands on her hips as she floated from rock to rock.  She possessed a phenomenal sense of balance, as I never once saw her even waver. It was a mesmerizing display. This, of course, was when I could observe her. I gutted my way up that hill as her polar opposite, huffing, stumbling and struggling with poles clanking away like an AT version of the ghost of Jacob Marley.

At the top, I planned to thank her for setting a great pace and ask her if she practiced yoga or had trained in dance.  But I never met her after she turned a corner far ahead of me near the summit.  Later, I’d discover that a small side trail off the AT offered a viewpoint to the west, but I’d kept heading higher following the white blazes to the top of the ridge.

As I stopped to catch my breath I started to wonder “Was she even real?”  I’m not sure.  But NOBOs if you should encounter a woman with a tie dye ribbon climbing that steep stretch, watch her incredible balance for a short while.  And maybe you can get answers to questions I had to put back in my pack.

I later learned that steep slope is referred to as the “Stairway to Heaven”.  And that mesmerizing display of balance was going to be my MMM of the day … until about a mile before I reached the shelter.  I heard some commotion in the woods behind me on the right.  Noise like this on the trail is commonly due to gray squirrel activity.  In fact it kind of takes you a couple of weeks to not freak out at sudden rustling in the leaves – ninety percent of the time it’s squirrels.

But this sound didn’t die away after the first rustling.  I heard more noise and shuffling from that same direction.  I turned and saw a black shape lumbering through the woods towards the trail in back of me.

Now understand that I have a “break the silence” / “I’m a little nervous” song in my trail repertoire.  It’s “Scar Tissue” by the the Red Hot Chili Peppers, mainly because the line “With the birds I share this lonely view” is so fitting.  Well when I looked back at that ambling black shape, I unleashed one of the world’s worst versions of that song.

The bear, slightly bigger than a cub, but not fully grown, looked at me but obviously didn’t think I had a voice worth following.  So he kept going in the opposite direction.  That was the day’s MMM.

After the heavy rain came and went, I’d spend a lot of Day 27 in Greenwood Lake, New York, a pleasant little community.   Finding my Propel and coffee in the local CVS, I’d return to the woods and settle in at the Wildcat Shelter.  At about 10:30 that night (about two hours after I’d fallen asleep) I heard nearby crunching of leaves getting louder!  I yelled “Go Away!” as the creature passed so close I could hear him grunt.

So two bear interactions in two days.  Other hikers were also seeing them in this section of the trail.  I was sure looking forward to the New England states! 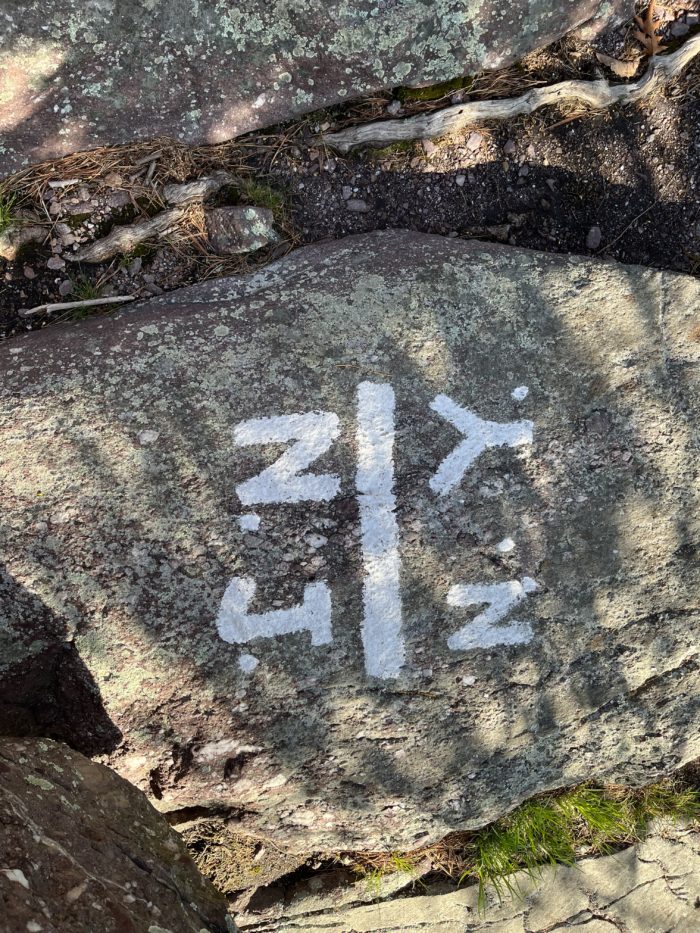 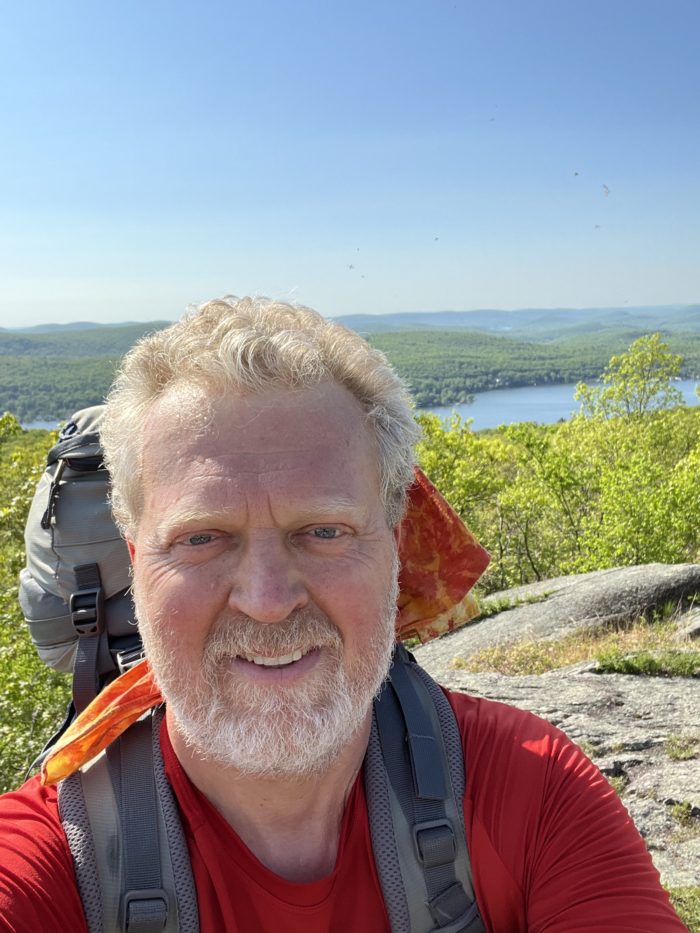