AT days 4-7: Pennsylvania from fry to freeze

The next four days of my AT hike would start with a sweltering 80 degree day and end with a frigid windy night.  In between I’d see a wide variety of trail landscapes and sights.

I had great night sky viewing at Deer Lick Shelter, though a low rumble of distant traffic noise persisted.  Once on the trail, those faded. The sound of hunter shotgun blasts in the distance was a bit unnerving, however.  I heard these sporadically over the four miles to Tumbling Run Shelter, where I knew a tough vertical climb to Chimney Rock awaited. Today was also predicted to be eighty plus degrees, increasing the challenge.

An oh what a challenge!  That thousand foot climb would turn out to be my MMM (Most Memorable Moment) of the day.  Everything was liquid: sweat dripped into my eyes, which teared up from my sun lotion, and my allergic nose kept up pace due to the budding trees.  I plodded slowly uphill as I was packing lots of water. It was torturous.  I was reminded several times of this Joywave meltdown video.

At the top a day hiker told me had just seen a rattlesnake lying across the trail. Oh, this was getting even better, huh?

You can probably guess that the rest of the day was tough.  I endured 8 miles through a dry, lifeless oak and beech forest devoid of animals and green plants of any type.  How empty was it?  I saw exactly one gray squirrel in 4 hours in an oak-filled forest!  How is that even possible?  The sun was relentless through the barren trees.

To pass the trail time during my first full day in Pennsylvania, I played a 5 minute word game.  List as many 5 letter words as you can that start with “PA” (but plural 4 letter words don’t count!!).  Go ahead and try it.  You’ve got 5 minutes, and it’ll help refine your Wordle skills.  My list of words is at the bottom of this post so do it now!

Quarry Gap turned out to be a wonderfully green and alive shelter.  The nearby woods on the trail were the same, teeming with active birds.  I noted again that these active bird areas frequently occur when there is no noise pollution the background.  Birds sing and call to attract mates, and background noise reduces the chances of each bird finding a mate.  When birds fail to mate, populations decrease.  Even at home please think about that the next time you haul out that leaf blower instead of a rake.

I had some unexpected head music on this day.  As I started to get into a hiking flow, my positive mantra “I was made for this” kept repeating in my head.  Then somehow that turned into Kiss’s “I Was Made for Lovin’ You”!  Whatever, it worked really well for high speed hiking!

The day 5 MMM?  This 18-inch garter snake I found sunbathing on the AT.  I stomped my feet, shook bushes, and finally tossed a small twig off of his back and he NEVER MOVED.  So I snuck quietly on my way around his tail end. 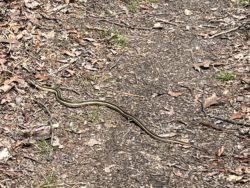 After lunch I’d go a full day without encountering another hiker on the trail though the scenery was nice. I guess I picked the right night to stay at a state campground, where I got to see people. 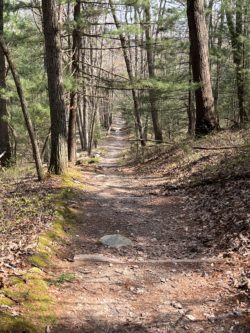 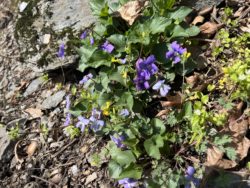 The day’s MMM came at 2am as I slept in my hammock at the campground.  It sounded like a young female screaming while being attacked   The first set of screams were blood-curdling, and I waited for any words like “help” or “stop”.  I considered how to muster up the courage to get up and run TOWARDS whoever or whatever was attacking her.  But when the second round of screams were identical (but still chilling), I figured it was an animal or owl.  In the morning a fellow camper told me it was a fisher cat.  If you’re feeling brave, here’s audio of a similar scream.  Please don’t play this alone in a dark room or at your local Panera! It’s absolutely chilling.  It was awhile before I got back to sleep.

As the trail day unfolded, I was on a mission of desire.

“Desire creates the power” said author Raymond Holliwell. Some men desire money, some desire control, and others lustfully desire beautiful women. On day 6, I desired a freshly made sandwich.  And Raymond was right – this desire created incredible leg power for me. I arrived nearly an hour earlier than I expected at Green Mountain General Store – the first spot on the hike where I could grab fresh food.

And oh, what a roast beef sub! With pepper jack cheese, mayo, lettuce, pickles and onions!  I lustfully devoured it!  Washed down with an OJ – another sorely missed item on the trail. 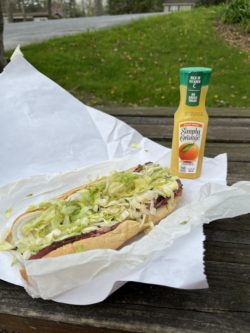 After lunch I called the Doyle Hotel in Duncannon to reserve two consecutive nights. This was my planned weekly “zero day” rest where you do no trail miles to let your body recover. And I needed it. Both of my legs were in pain and I only could take Advil until I got some extra rest.

When I resumed my trek I falsely assumed that part two of the day would be as easy as the morning  It’s an easy trap for an AT hiker.  Both the trail and the weather turned difficult; even the rocks in the forest were darker.

The top of this stretch featured huge rocks to climb through, reminiscent of Mahoosuc Notch  But I persevered, arriving at the shelter just behind Waffles and Espresso, two hikers who were at my lunch stop.  Later, Lampshade and the Georgia Satellites arrived as well. 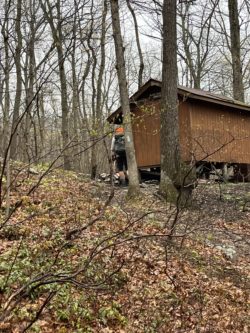 The mileage number above is not a typo.  It is a testament to:

I’d start the day by heading 4 miles into Boiling Springs to get the Backpacker Special. (Both town and breakfast shown below.) 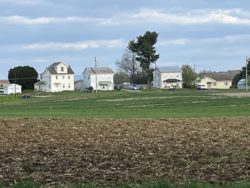 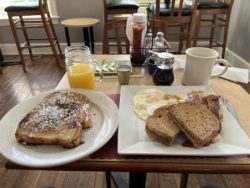 This section of the AT was unlike any hiking day I’ve ever had.  I walked across numerous grass fields, beside crop plantings and in leafy dividing plots filled with birds in thickets.  Maybe pictures tell it best: 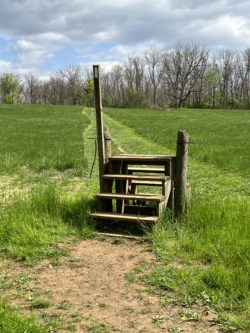 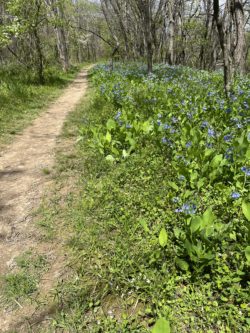 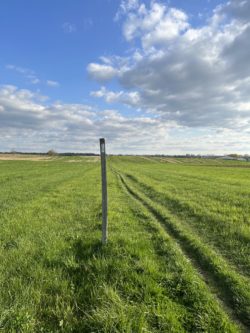 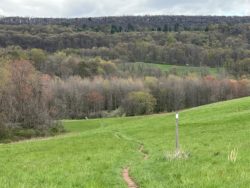 I wish I could say that I felt great physically – but that was not the case.  My right ankle and lower leg were in great pain early morning, then my left ankle got incredibly tender and sore after several twists on the rocky trail.  About 15 miles in, it seemed that every tendon, muscle, ligament and joint below my knees was competing for my attention.  I tried to stay focused on crunching the miles.  Armando Bacot’s gutsy effort on a bad ankle in the recent Final Four came to mind.

I really needed as much downtime as I could get in town to rest and recover.  At 3:10 pm I faced a decision at this sign:  leave 11 miles for tomorrow into town, or push on 7 extra miles now. 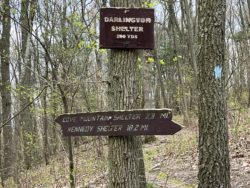 The final three miles of my longest day would prove to be an epic challenge.  A cold front was moving in with 30 degree temperatures and violent 20-40 mph winds.  And like a good movie script, the ridge route I traversed was completely exposed to those winds. The extra rocky terrain and bending trees added more drama. I limped across what seemed like an endless ridge trail. Expecting to reach the shelter trail at 6:45, I checked my watch three times in 30 minutes. Surely it MUST be soon?

And there it was, a small sign that brought so much joy: 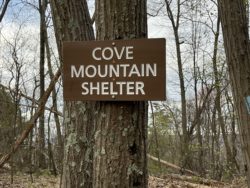 I had expected that sign to be my MMM for the day, but no more than 20 seconds later it was topped.  In taking just a few steps behind the ridge line to the east, the howling, violent wind completely stopped!  I had my MMM. Down at the shelter I found only Mega, another hiker who had pulled the 25.5 mile trip off today.  With plenty of shelter space I set up my sleeping gear inside and shared hiker talk.

I’d done my highest hike mileage day ever, and it set me up for a four mile hike to town tomorrow.  I felt proud of my first seven days on the trail, covering 120 miles.  But I hoped I hadn’t “gone out too hard” and caused myself injury.  I’d start the healing in Duncannon tomorrow.