AT Days 56-59: Moosilauke, Kinsman, Franconia and an unplanned exit

I’d tackle some big peaks during this New Hampshire AT stretch until some frigid wet weather forced a decision about continuing on the high ridge.  Here’s the daily summary:

Up and over Mount Moosilauke

I’ve probably day hiked beautiful Mount Moosilauke eight or nine times, yet I’d never climbed it via the AT route, the Glencliff Trail.  On Day 56 I’d be up early and on the trail by 6:40 AM, hoping to get to Kinsman Notch early for food and resupply.  I had already reserved a bunk at The Notch hostel for the night.

The trail opened up into a bright meadow early on: 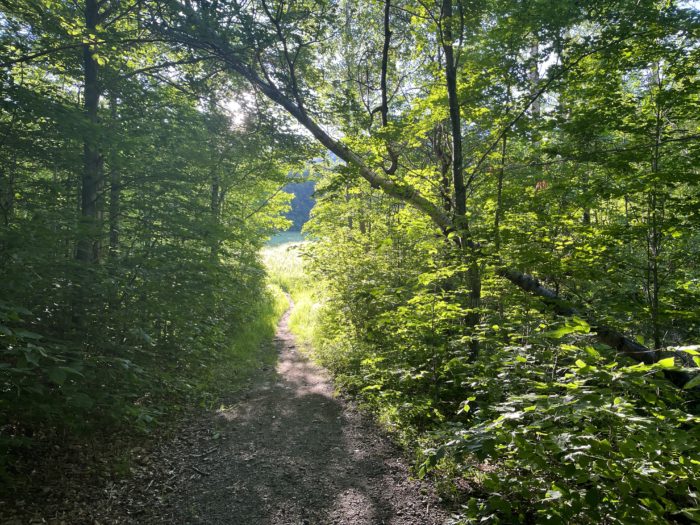 The climb soon became a steady gradual rise, then a much rockier and steep rise to near treeline.  Still, I handled it pretty well and would emerge on the East Peak before 9 AM.  That’s the Moosilauke summit over my shoulder, about a mile away: 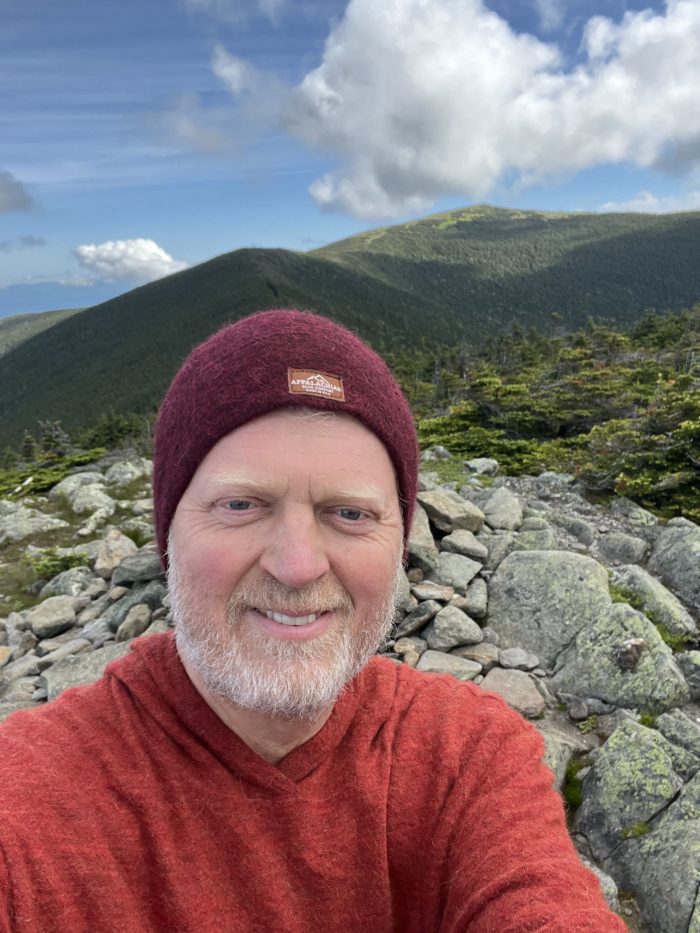 In the next hour I’d encounter a group of 25 hikers headed to the top, along with several other day hikers.  When we all converged on the summit, there would be more than 35 of us  there at 10 AM on a Wednesday morning – by far the biggest peak crowd I’d seen on my trek. I sifted through the masses to grab a photo of the summit sign: 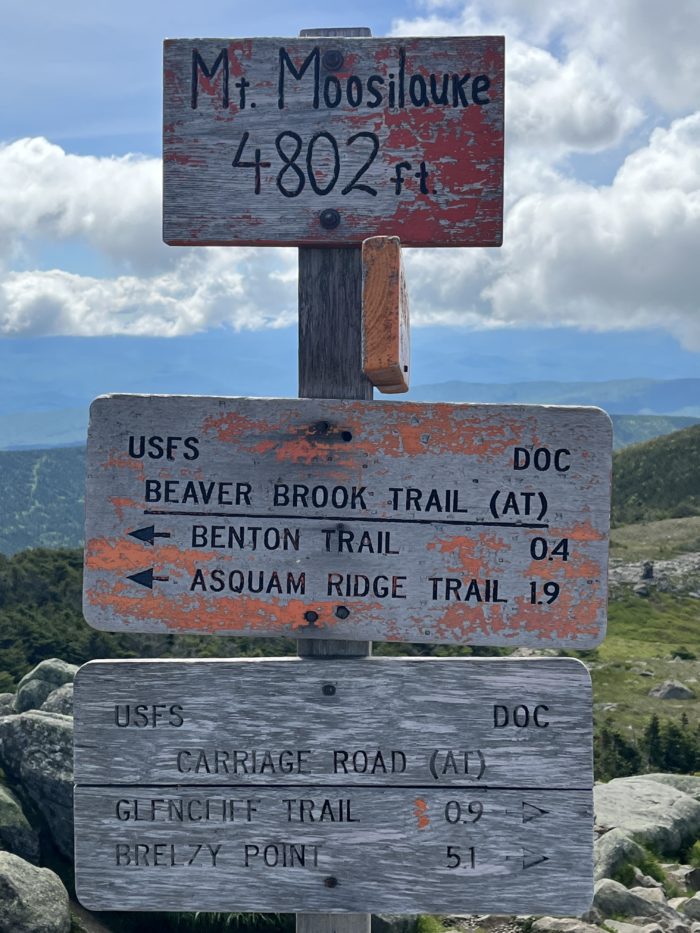 My knees weren’t looking forward to the very steep descent down the Beaver Brook Trail.  I’d done it a couple of times before on day hikes, and it is rocky and challenging – although the cascades beside the trail are beautiful: 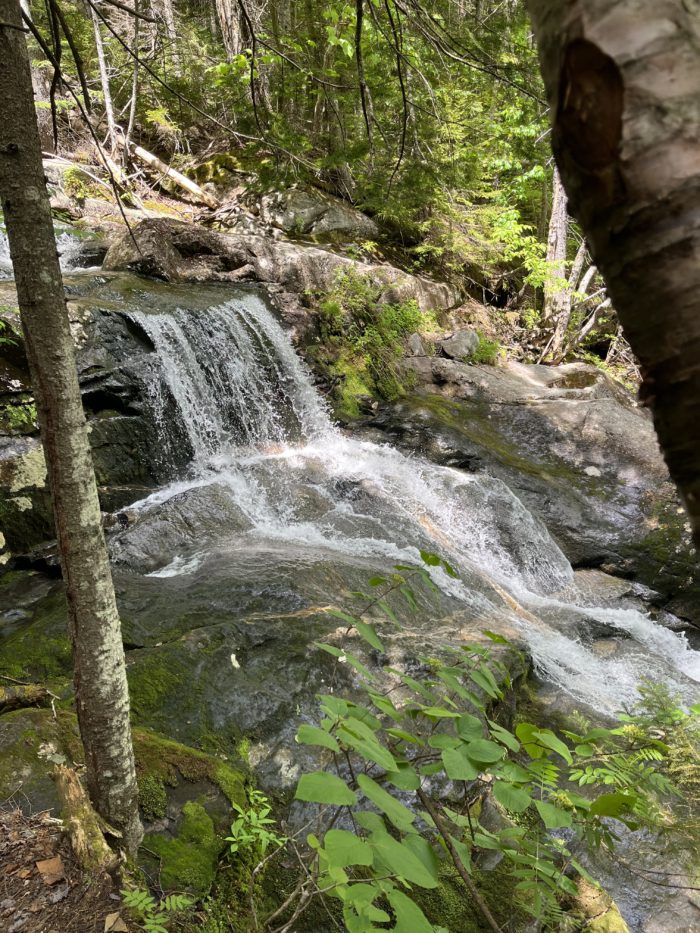 To town and hostel

I completed the steep descent to Kinsman Notch by 12:30, so I called a hiker shuttle to take me to the nearby Woodstock Brewery and Inn for some immediate loading up on fresh food and beer.  And although my Philly Cheese Steak sub was delicious I really couldn’t say that about their site-brewed beer.  In fact, I found their IPAs so bad that after two drafts I couldn’t bear to have another.  (You may guess that this is not a common situation for me to be in!)

The Notch Hostel proved to be an efficient and fun place to spend the evening.  I ran into a few trail faces that I’d met before, including Velma and Broccoli, whom I’d met in both New York and Vermont.  After taking care of resupply and laundry, I was ready to turn in at 9PM! 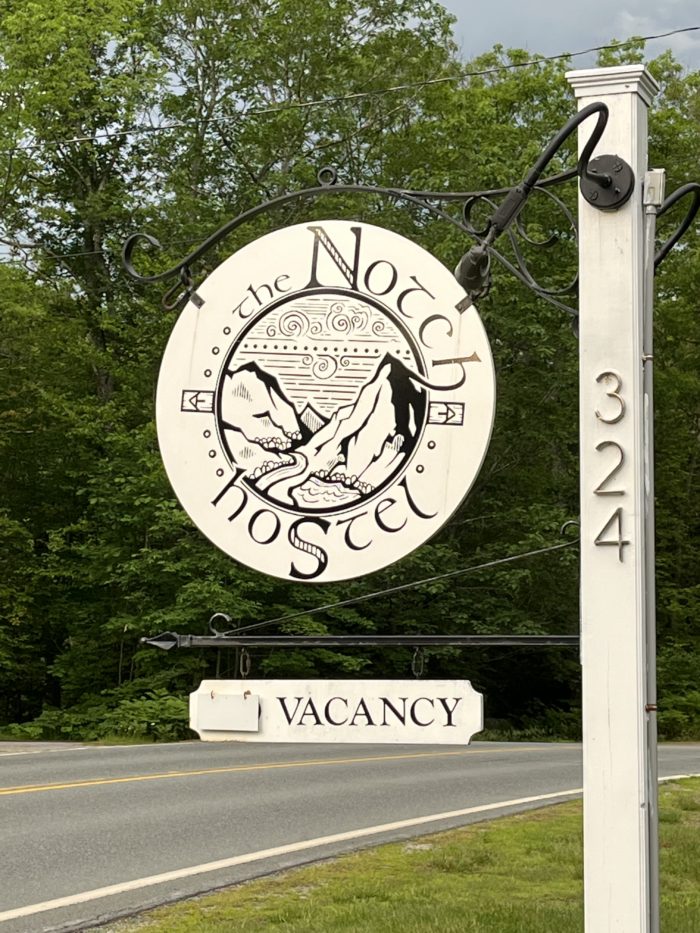 A 6:30AM shuttle would take me and another thru-hiker, Cowboy, back up to Kinsman Notch to take on the tough hike over South and North Kinsman on Day 57.

Those of you who have read from the very start of my blog series (including my prep hikes) know that there’s history here.  I’d done an AT prep hike on this very section of trail in 2021 that left me shaken and concerned about my ability to physically handle the trail.

I’m happy to report that the 2022 version of this climb was much more successful.  In addition to handling this rough trail with a bit more ease, there were a few interesting things along the way:

The smile here belies the fact that the wind was probably 30-40 MPH up on this ridge! 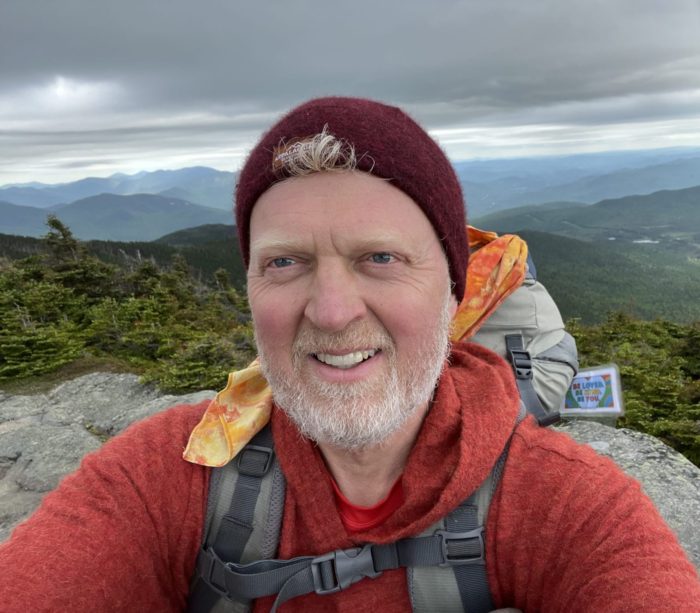 Good friends join me for a climb

On Day 58, I was thrilled to be meeting up with two good friends (and faithful blog readers) to join me in hiking Mount Liberty on Franconia Ridge.  Marc and Rags met me near Route 93 in Lincoln as I descended from Kinsman Pond, and the three of us tackled the steady climb together. 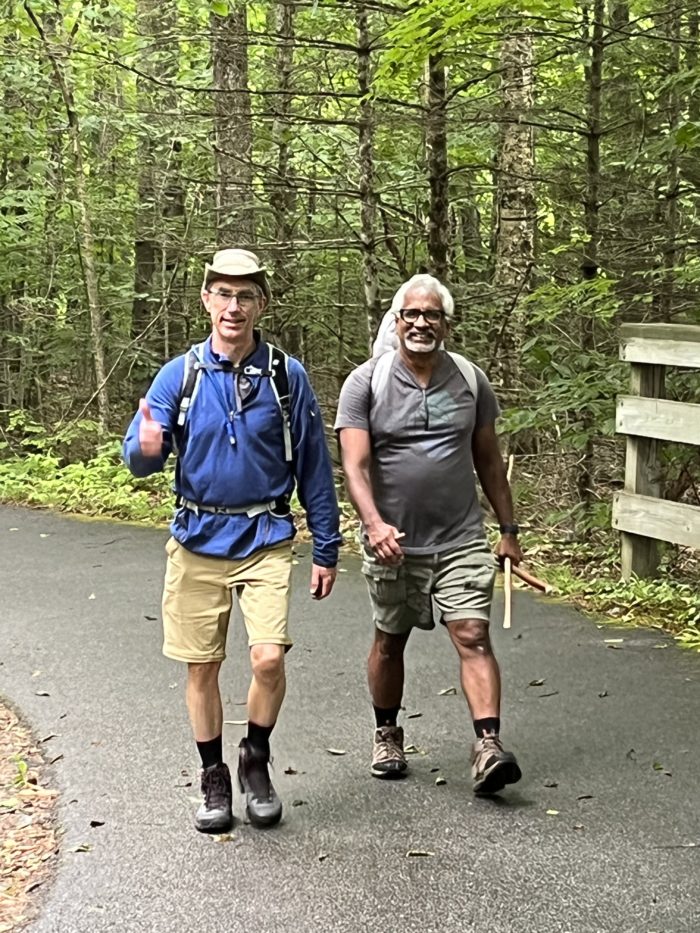 I really enjoyed being able to hike and catch up with a couple of other good friends and sharing lots more information about my hike so far!  Of course, I didn’t really come off as the hiking expert when I suggested that we ignore the early raindrops close to the summit.  That led to the three of us putting on raingear well after we were thoroughly soaked by the morning downpour! (What had I learned from two months on the trail?)

Ultimately, however, the sun and the smiles came out at the summit, affording us great views like the one of Mount Lafayette behind this triple-selfie: 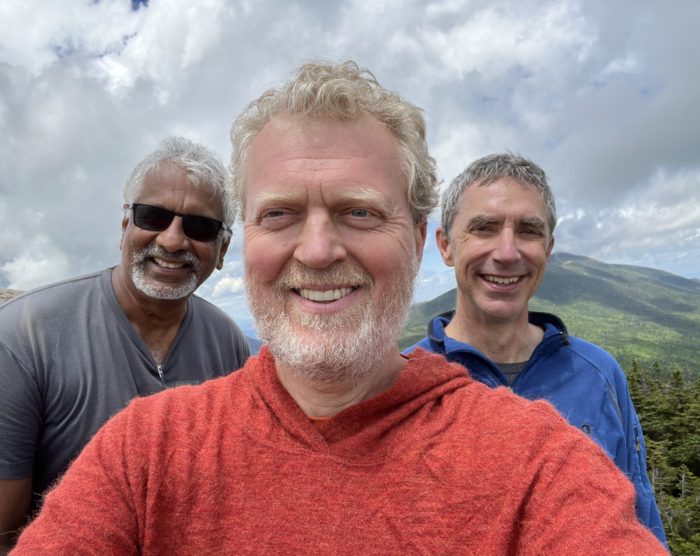 That evening I had planned to stay at Garfield Ridge Shelter, located at about 4000 feet high.  Several days earlier when forecasts showed extreme cold weather moving into New Hampshire my concerns about this plan grew.  Nearby valley town Lincoln would have lows in the 40s; the mountains would be much colder.  With the prediction of moderate to heavy rain starting at midnight and continuing the next day, I had real doubts about staying at Garfield Ridge.

But for right now I needed to make my way across Franconia Ridge.  The weather had varied there from sun to low dark cloud cover during the time I’d spent at Liberty with my friends.  I hoped for the best and pressed on. 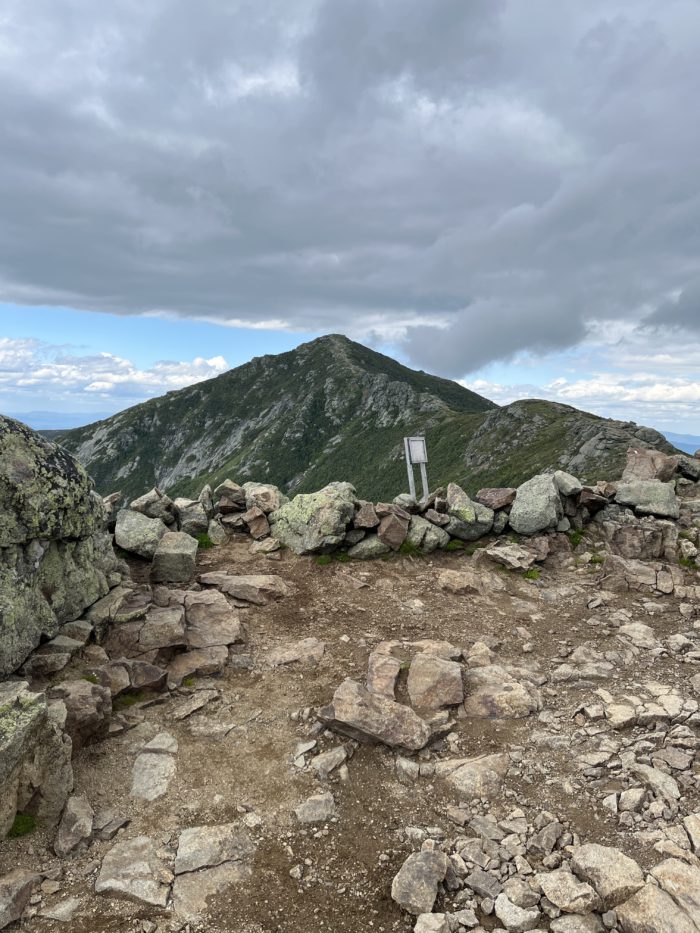 As I made my way to Mt. Lincoln in the middle of the ridge, there was a stretch of sun and calm wind.  I would have loved to spend hours up here starting at the magnificent views, but I kept telling myself “Don’t linger, the weather can change so quickly.” 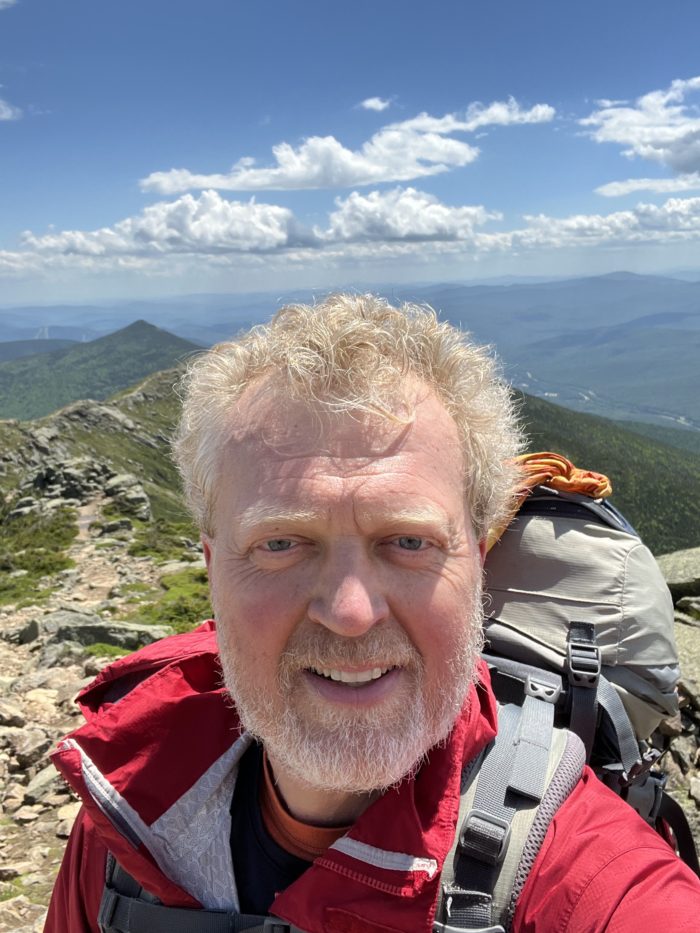 Sure enough, the weather would change quickly, in a matter of minutes as I attempted to make my way across the mile long stretch of trail between Lincoln and Lafayette.  A westerly wind kicked up, pushing black clouds across the ridge.  In a number of places heading up Mount Lafayette, I was blown sideways by gusts that were probably around 40 MPH.  When I reached the Lafayette summit, I hunkered down behind a stone wall and waited for this ominous cloud to pass. 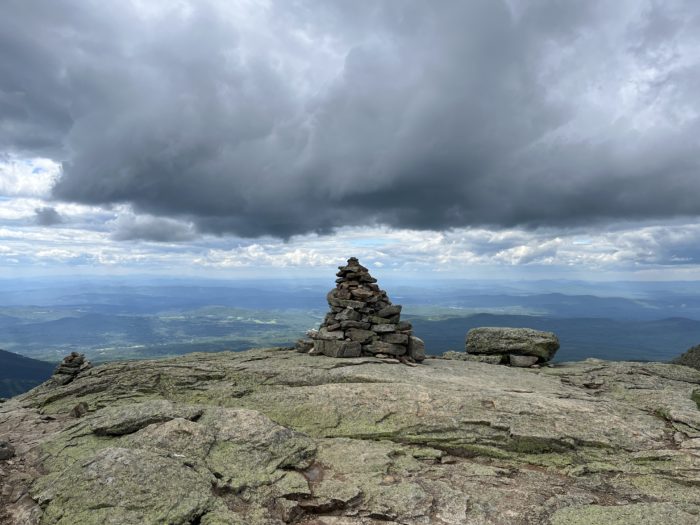 A critical decision to be made

As I’ve noted previously, a thru-hiker is constantly making decisions small and big throughout the days and weeks of an AT hike.

This was a fairly simple decision with big potential impacts.  I wasn’t equipped for 20 degree temperatures, ice or snow.  I was carrying one day of food – any slowdown in my travel would have left me hungry.  Reluctantly, I broke my plan and found a trail that led down to Route 3 near Twin Mountain.

Parallels to my dad’s journey

I’ve shared in this space about my dad’s influence on my hike.  I’ll remind you all that on Day 58 I was retracing my father’s final steps before his death.  There were some parallels that I couldn’t stop thinking about:

Questions that would remain unanswered.  And I needed to deal with today. 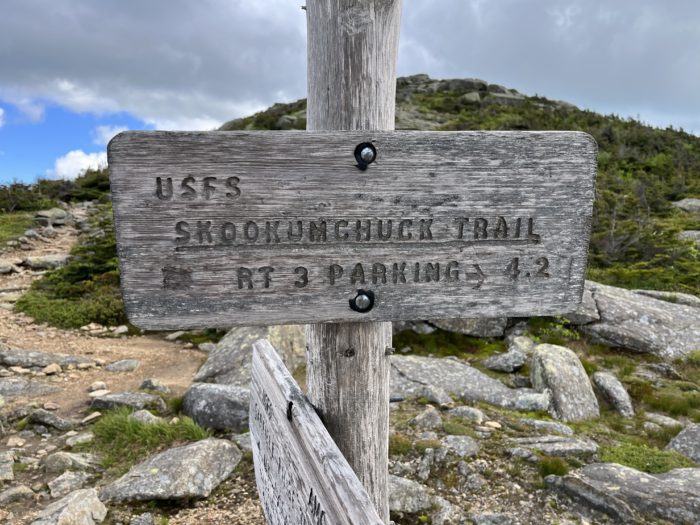 I’d end up zipping down the well-constructed and maintained Skookumchuck Trail in about two hours to the safety of the valley.

And now — I have to hitchhike??

I had a place to stay at a condo owned by my relatives… but it was over 15 miles away.

I’d never hitchhiked.  OK, first thought was- pack on the ground, hold my poles like I can’t walk another step.

OK, plan B – where is my hat?  My hair probably makes me look like a crazy old guy.  And I’ve got to put the pack on my back!

Bam!  Within one minute a red pickup pulled over.  A kind looking fellow urged me to throw my stuff on top of his pack in the backseat.  But he could only take me halfway to my destination.

Steve turned out to be a great guy – a retired resident of Bethlehem NH, he was a ski lift operator at Cannon Mountain.  When I told him that I was an AT hiker getting off of the ridge due to weather, he said “You know what, I’m taking you to your doorstep.  It’s really strange, I don’t think I’ve picked up a hitchhiker in 50 years.”

I’d spend the next day taking a zero at the condo while temperatures dropped into the 40s.  Wind and rain made the conditions simply awful.  It seemed that I’d made the right decision.  The rest of the White Mountains could wait.