AT Days 60-63: Webster a tougher climb than Washington? Sure felt like it!

With bad weather departing the high New Hampshire ridges, I’d return to the AT and tackle big peaks including Mount Washington.  Here’s the summary of these four days:

In my prior post I shared the decision I faced on Franconia Ridge with frigid weather and precipitation on the way.  There’s no doubt in my mind now that I made a smart choice to get down from the 3800+ foot ridge and take two zero days in the valley.  I’d like to thank all of the experienced hikers and friends who’ve commented on my blog post, voicing their support.  Unfortunately, one experienced hiker from Massachusetts did not heed the weather warnings, and perished due to exposure on Mount Washington that Saturday.  Please be cautious when bad weather approaches in the White Mountains, my fellow hiking friends!

So Day 60 was the second of my zero days – and it was a very enjoyable one spent with my brother-in-law, sister-in-law, and nieces and nephews in a warm condo while the cold wind gusted outside.  There also was, of course, the need to resupply with some essentials: 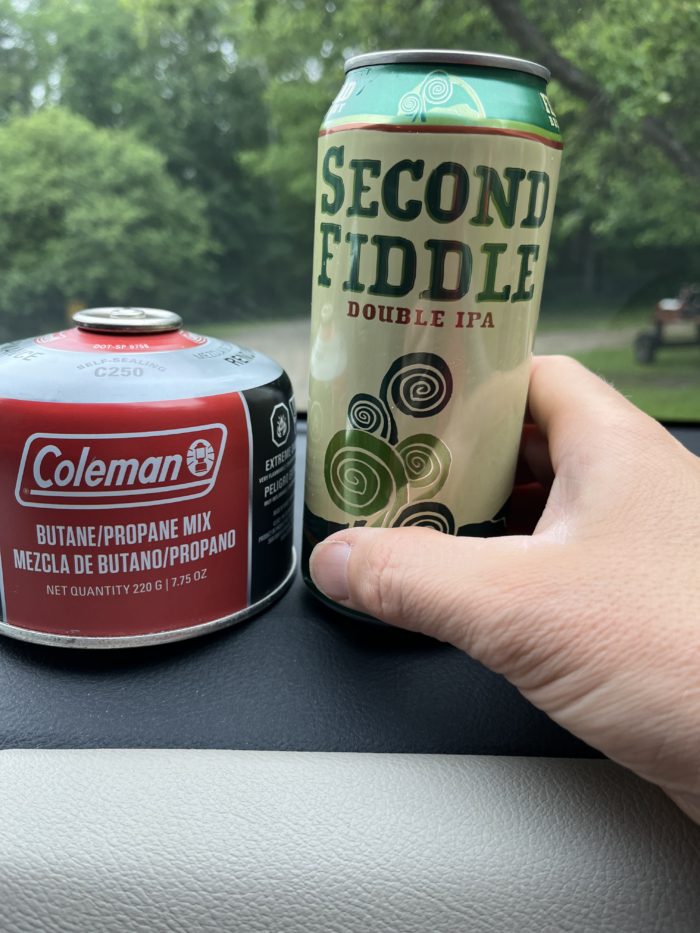 A Beautiful Day on the Ridges

Starting at 6:30 AM on Day 61, I’d retrace Friday’s steps on the Skookumchuck Trail to get back to my departure point between Mounts Lafayette and Garfield on the Franconia Ridge.  I’m very glad I selected this trail as my ridge exit and entry point because:

The music playing through my head that morning was The Black Keys’ “Tighten Up”, which seemed to fit the quick rhythm I got into on the Skookumchuck Trail.  (Ha! Love it!)  I found myself really anxious, however, to get off of this blue-blazed side trail and get back into the “community” of the white blazed AT.  Over the last two months I had become a part of that community – and I was eager to meet more thru-hikers and share time with them.

When I emerged on the ridge, I could still see snow on the top thousand feet or so of Mount Washington in the distance!  If you can zoom in on this picture, maybe you’ll see it too. 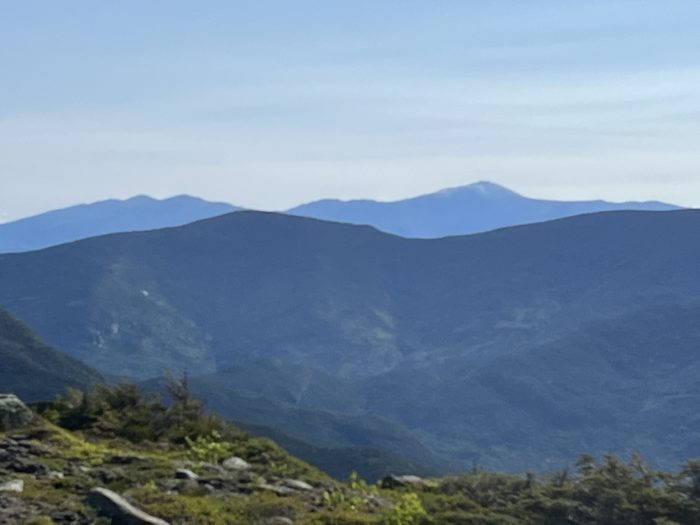 I had a challenging route ahead of me, starting with Mount Garfield (shown below): 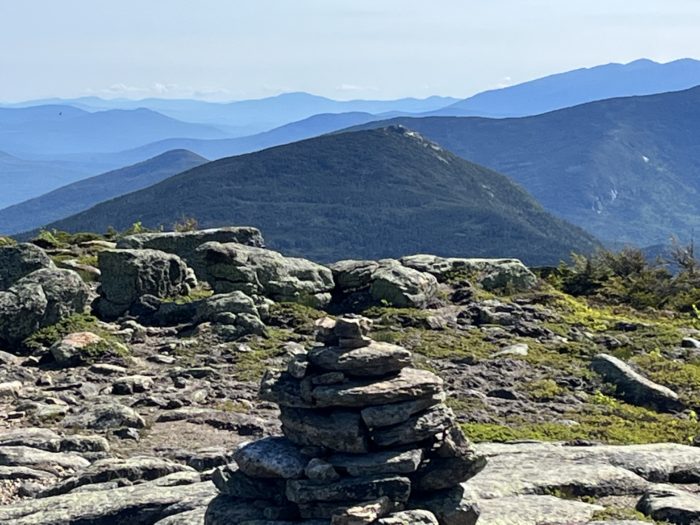 But the views from both Garfield and South Twin would be spectacular, as usual!  This is a look back at Franconia Ridge: 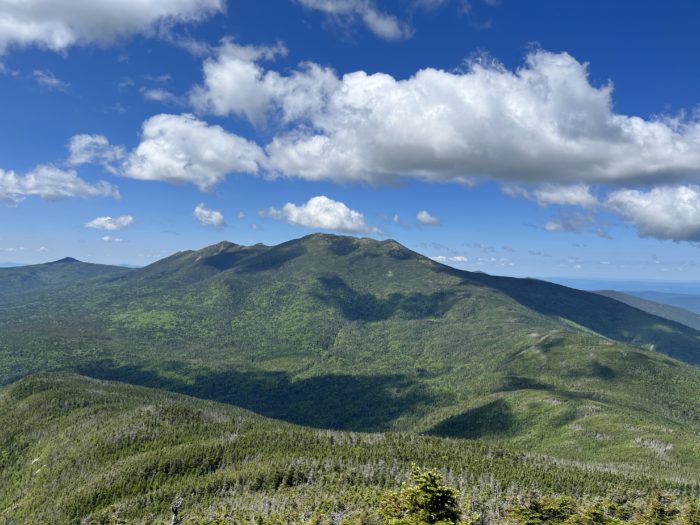 Here are Mounts Flume and Liberty (left to right respectively), from Mount Garfield.  I’ve always thought that Mount Liberty looked like George Washington lying down on the ridge – especially when seen from the town of Lincoln.  It’s got a rounded “head” and a prominent “nose” that forms the summit rocks.  Not as much from this angle, but I think you can see the pieces if you look closely: 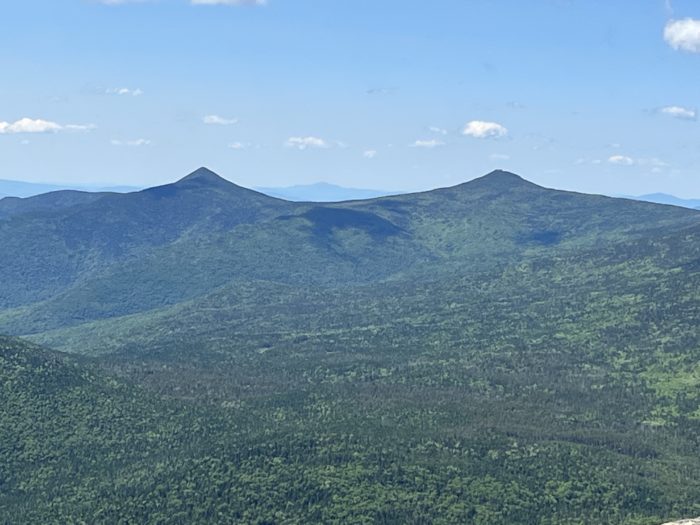 Here I am, extremely pleased to be on top of South Twin, which at 4900+ feet gives you the feeling of being on top of the world!  The 360 degree views in all directions do not include any roads or towns – it’s nearly all beautiful green and blue: 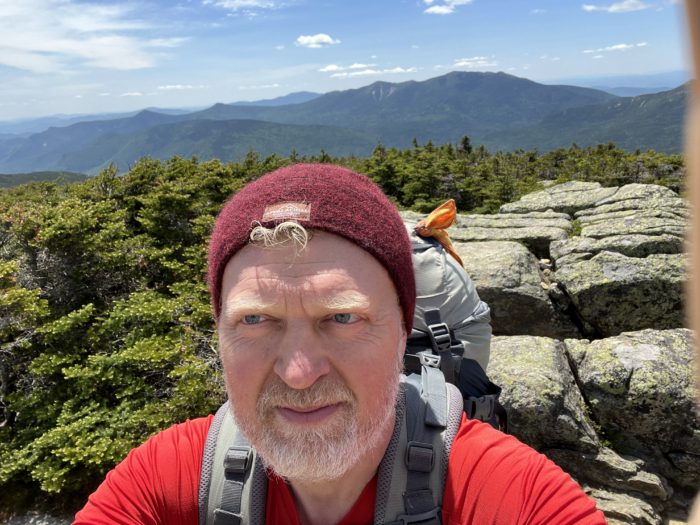 And not to be outdone, Zeacliff at the end of Zealand Ridge provided another set of awesome views later in the day.  This is a view of the steep ravine off of the back of Mount Carrigain.  If you’ve ever hiked the Desolation Trail to or from that peak, you already know just how steep that is: 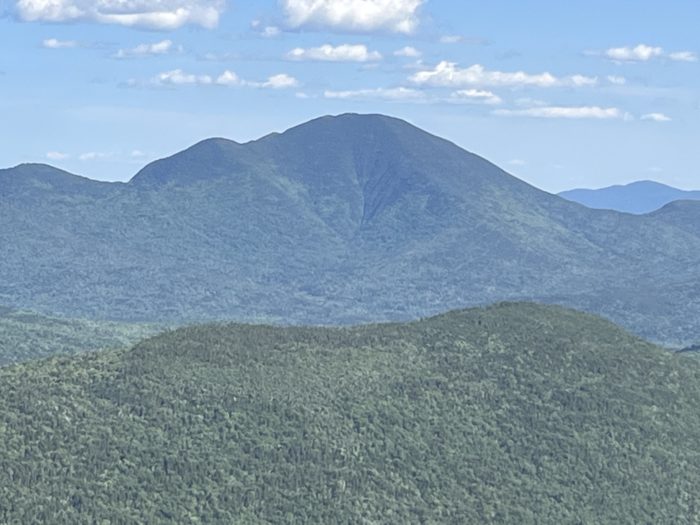 As it turned out, I actually ran into many more day hikers and overnight backpackers on that Day 61 route than thru-hikers.  People were taking advantage of the great weather on the new Juneteenth holiday that Monday to hit the trail, and it was great to see!  The summer New Hampshire hiking season had started!

That night I’d settle into an off-trail (“stealth”) hammock spot in the Zealand Hut area.  After over 17 exhausting miles (that’s right, the 4.2 miles up the Skookumchuck Trail doesn’t count in my official miles tally), I’d doze off almost instantly after climbing in.

A Tough Grind on Webster

Day 62 was to serve as the “setup day” for tackling Mount Washington and the Presidential Range the following day.  But I have to tell you all that I got more challenge than I expected in the steep and ledge-filled ascent of Mount Webster from Route 302 in Crawford Notch.

The start of the day took me six miles through the flattest section of the AT in New Hampshire on the Ethan Pond trail.  Yes, the going was very wet, muddy and overgrown, but not that physically challenging.  As I departed this trail on a dirt road down to Route 302 I spotted yet another bear (my sixth encounter of the trip!) rumbling back into the woods.

Crossing the highway I quickly encountered both an unforgivingly steep climb and relentless black flies.  I’d done a day hike of the Webster Cliff Trail on a fall weekend the prior year – and found it very challenging – but my 30+ pound pack and the bugs made today’s ascent brutal.  Perhaps the cruelest part of this 3.2 mile hike is that there is a leveling off point about two-thirds of the way in that takes you to a large cairn on the ridge.  Summit, right?  Wrong!  You glance to the north and realize you’ve got another mile and several harrowing ledge scrambles on the ridge that overhangs the road a couple thousand feet below!

All in all, that 3.2 mile climb would take me three full hours!  I’d be much happier when I summited Mount Jackson shortly thereafter, and got a distant early glance at the next day’s target – Mount Washington – way behind me here: 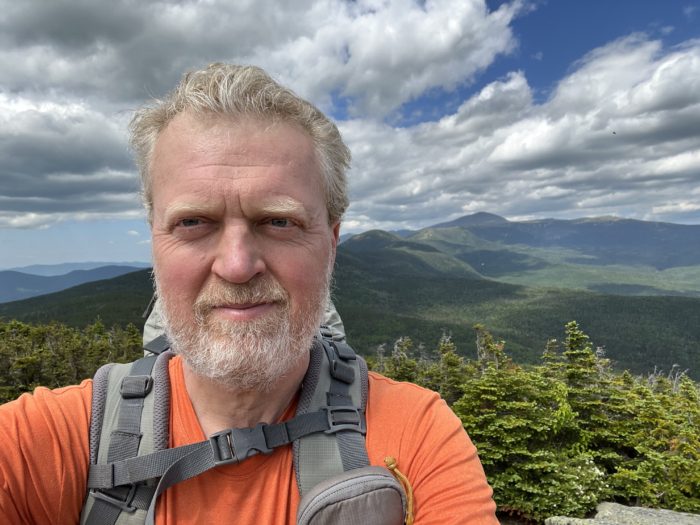 I’ve summited Mount Washington many times in my hiking past, and every time it is a special experience.  My AT Day 63 hike would prove to be no different.  I woke at 4:45 AM, eager because the weather would be dry (though windy), and hit the trail by 6:25 AM.

As soon as I got onto the ridge of Mount Clinton (Pierce) I was treated to cool views of clouds lining the valleys: 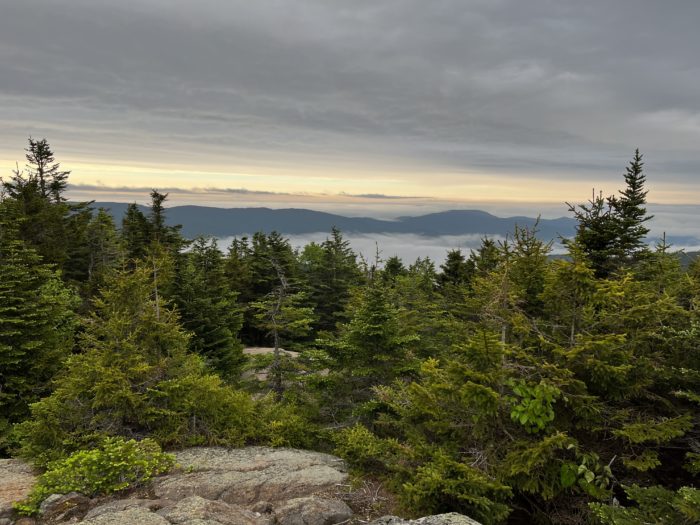 I kept up a furious early morning pace on my way up the Crawford Path, and when this view of the big mountain’s summit hit me (along with the constant 20-30 MPH winds), I instantly burst into singing lines from Kansas’s excellent song “The Wall”:

It rises now before me, a dark and silent barrier between

All I am and all that I would ever want to be ….

Joy!  Joy of just being in this special place, being able to view the wonder all around! 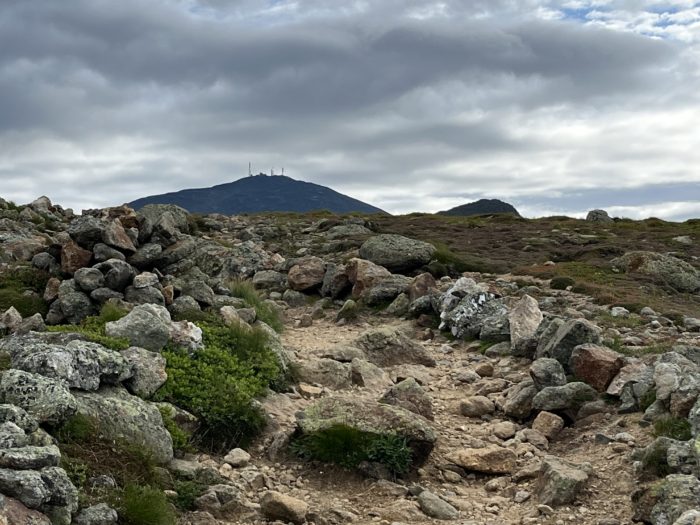 I’d summit the mountain before 10 AM that morning.  Queue the obligatory summit photo: 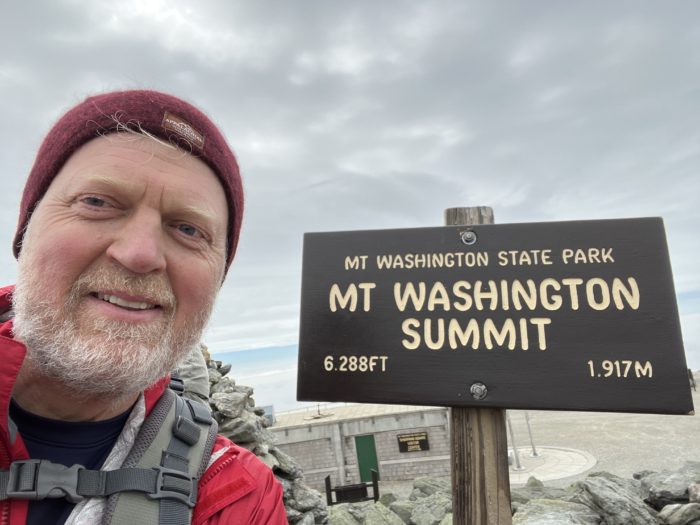 I’d see so many more amazing sights on the circular Gulfside Trail which would take me beside Mounts Clay, Jefferson, and Adams.  One of the most amazing moments was crossing this patch of snow (from last weekend’s weather) on the trail near Mount Jefferson. 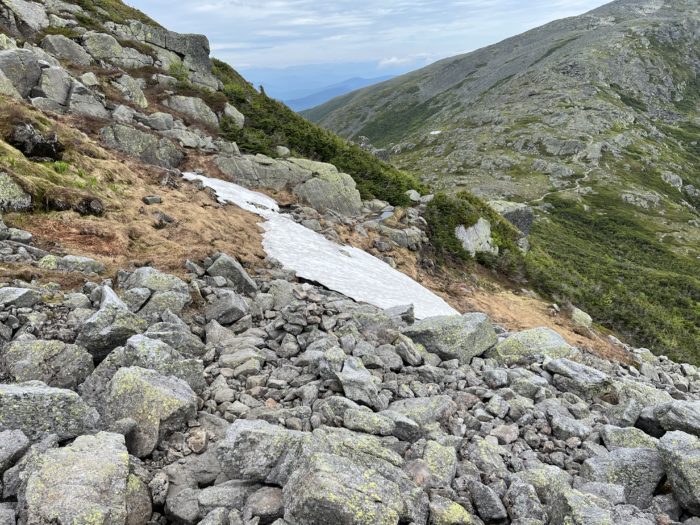 I’d end up blazing the twelve miles around to Madison Hut from Mizpah Springs in a mere seven hours and ten minutes — which I still have a hard time believing.  Oh yeah, and then I’d run smack into Mount Madison and the Osgood Trail.

By all accounts, President James Madison was an accomplished statesman – one of the true Founding Fathers of the United States.  So why did this great “Father of the Constitution” have his name put on such a rough and nasty mountain?  Most experienced New Hampshire hikers I’ve talked to have their awful “Mount Madison” story to share.  The climb and descent is typically relentless, the weather often rough.

The Osgood Trail, the AT section that runs over Mount Madison from the Hut downward towards Pinkham Notch does nothing to improve the hiker’s experience.  Even before my Day 63 hike down this route, I ranked it as one of my least favorite New Hampshire trails.  It heads straight up from the hut in a brutal half mile over the peak, then plungeses relentlessly downward on a wind-exposed ridge over endless false summits: 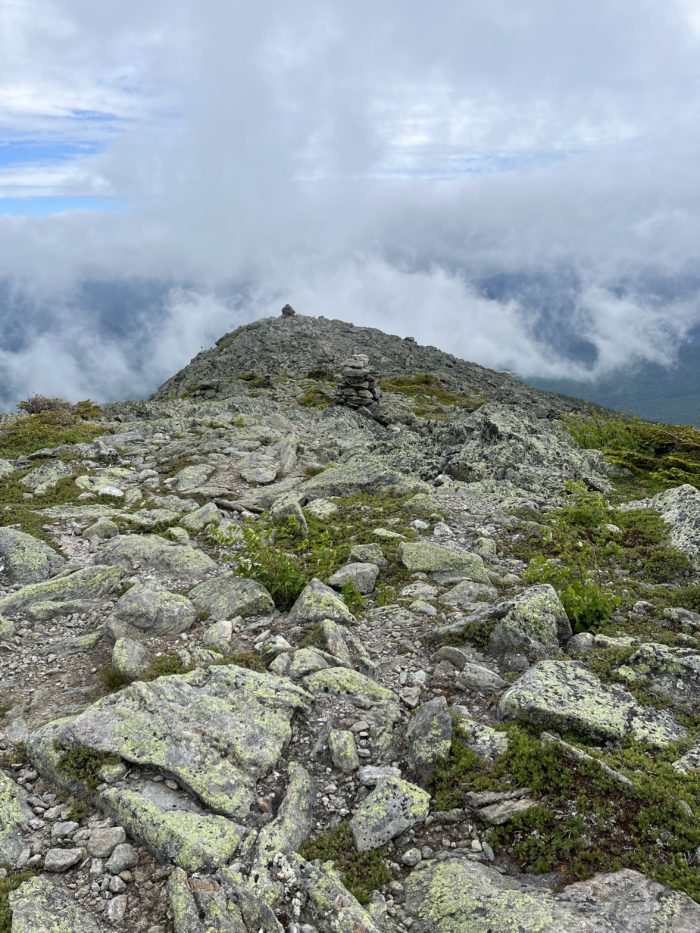 And even when it enters the trees, the recently re-routed Osgood Trail is narrow like a rock-filled elevator shaft down the mountain side.  So after nearly three unhappy hours on this brutal trail, there was NO WAY I was going to pitch my hammock at the “Osgood Campsite”, the next logical stopping point.

Day wraps up with a waterside dinner

Instead, I headed on to a wonderful small campsite called The Bluff, which had a perfect spot to hang my hammock in a quiet grove of trees.  Nearby fast-flowing Parapet Brook provided a wonderful venue for my dinner: 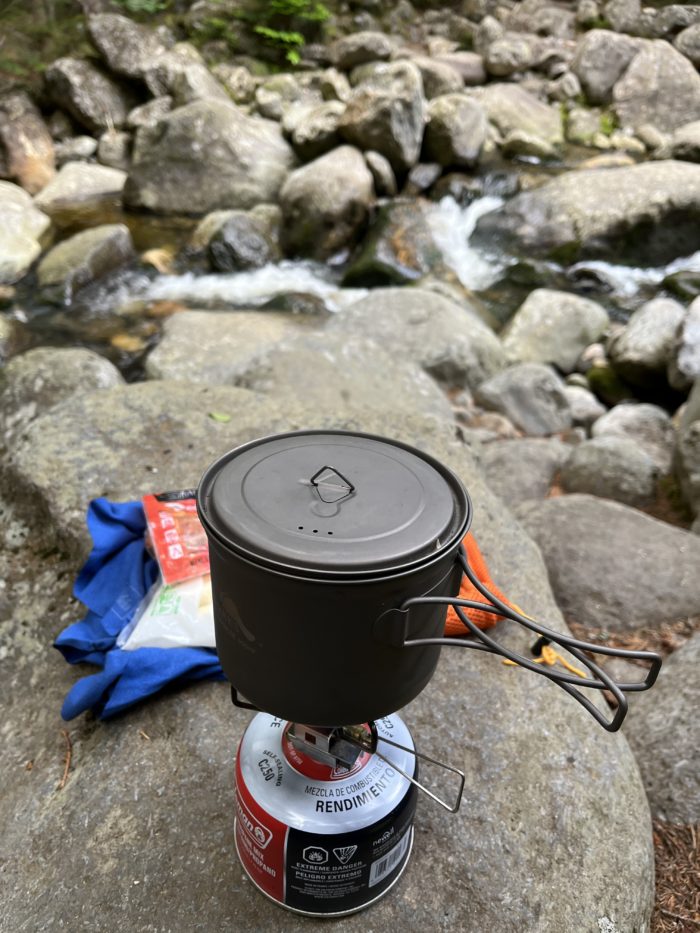 And I was treated to the wonderful rushing water sounds all evening in my solo camp space: 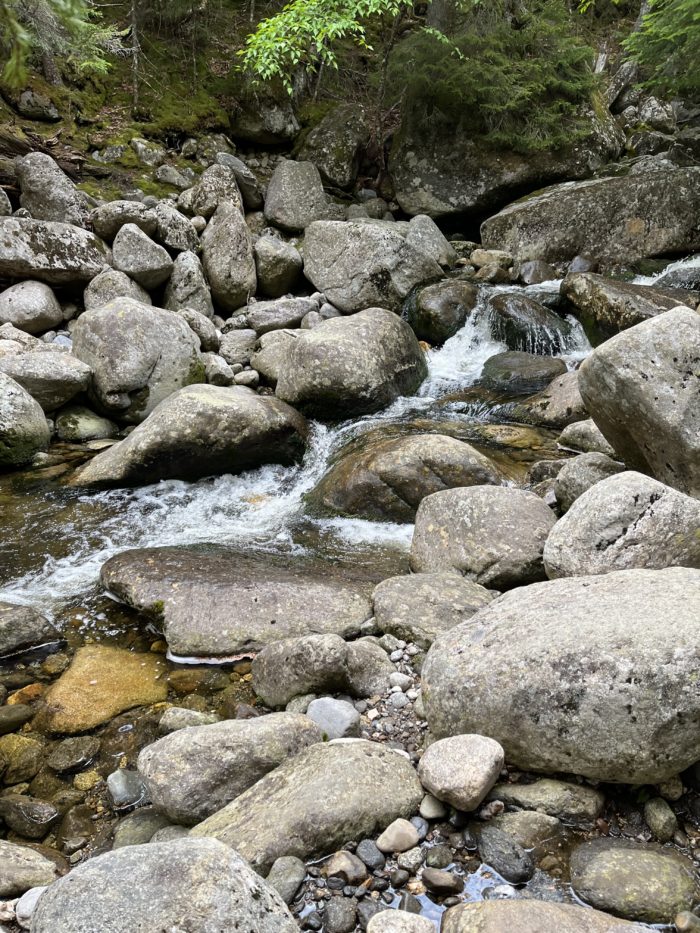 Overall, these days provided a fantastic return to the trail for me in this incredibly scenic part of the AT. 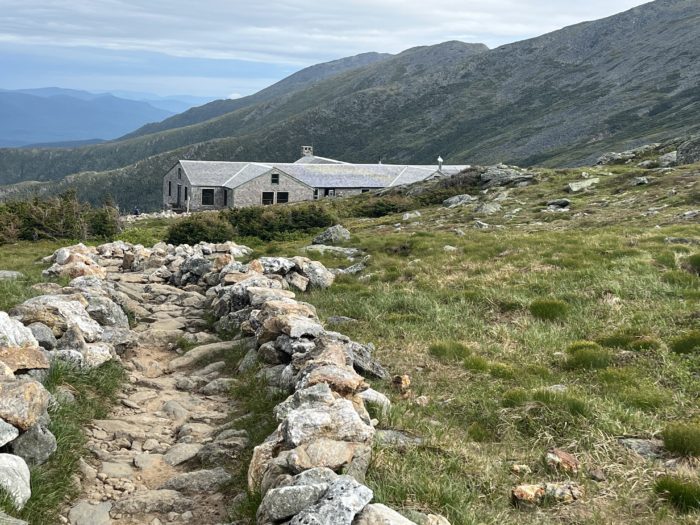