I’d just finished the toughest stretch of lower Maine when I climbed the 4000 foot Bigelow peaks.  The next key destination on my AT trek was Monson, Maine.  This tiny town serves as the hiker supply point for the “100 Mile Wilderness” that must be crossed to reach Mount Katahdin.  Here’s the daily summary:

Moose, loons, and the feared goshawk

On Day 76 I knew I faced a bumpy morning climb on Little Bigelow, a rocky ridge north of the big peaks.  But after that the trail terrain looked much flatter.  After a few miles that morning I ran into fellow hammocker Straps, and we continued hiking together.  Around a bend I spotted a tall gangly brown animal maybe 100 feet up the trail.  A moose sighting!  Very satisfying moment for us, even though the camera-shy animal left the scene quickly.

This section of the AT features many pristine blue ponds and lakes.  And although loons were hard to spot on the vast waters, their calls could be heard loud and clear as I passed by.  That sound is pure Maine!

But the most widely-discussed animal amongst hikers that week was a goshawk nested very close to the AT near Pierce Pond Shelter.  I first learned about the dangers of this bird from what looked like a “Wanted” poster in the Stratton grocery store.  There were also warnings posted on trail: 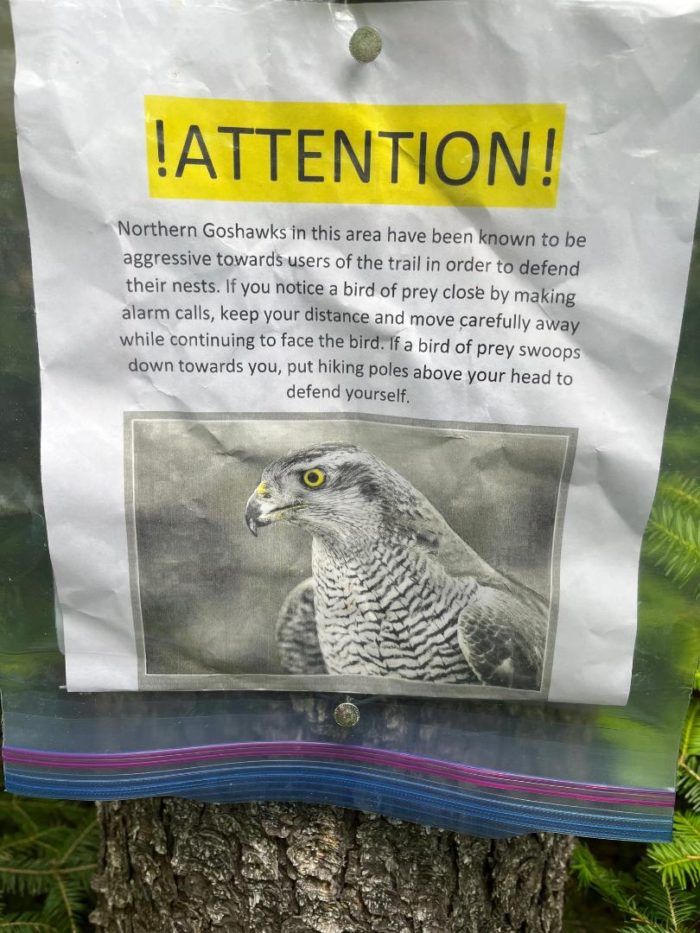 On the Far Out app, hikers shared their stories of recent goshawk encounters: screeching frontal attacks, swoops from behind, even a clawing of someone’s head!  Since the bird’s nest was within the last mile of my Day 76 hike it was on my mind the whole day.  Ultimately, the bird stayed put as I passed, although I did hear hawk-like noises in the area.

About nine miles into Day 76 I’d pass 1,000 miles hiked for this AT trek. In addition to conjuring up memories of many of the places I’d been it triggered the song “I’m Gonna Be” by The Proclaimers in my head.  You may not recognize that song by its title, but you’ve heard the chorus lyrics I’m sure:

Just to be the man who walked a thousand

Miles to fall down at your door

Ahh – that was a great head music song to hike to all day long!

The names in Maine are mainly not so plain

Maine does things slightly differently than other nearby AT states – especially when it comes to naming stuff. 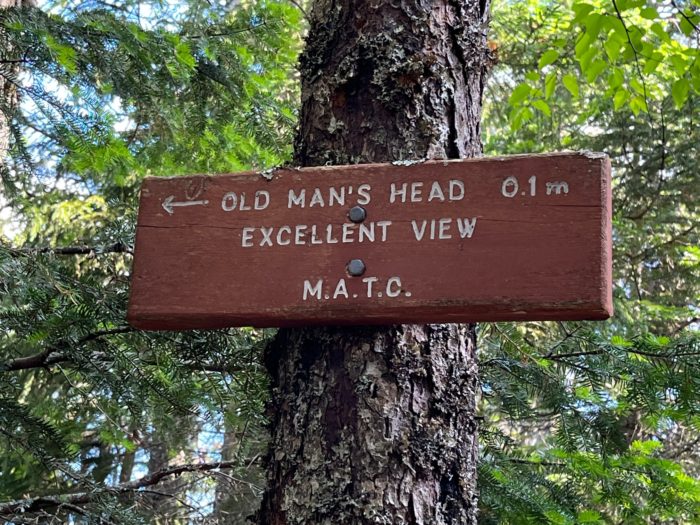 It’s a true rarity when a trail sign will actually share an opinion of the destination with a hiker.  After taking in the vista, which I’d describe as “very good plus” (quite close to “excellent”) I took advantage of a rare opportunity.  I took a pee on the Old Man’s Head.  How many people can say they’ve done that?

It was obvious from the start that water was going to play a big role on Day 77 of my hike.  I got about 500 feet from the campsite when I ran into this scene. (And yes, that is a white AT blaze on that tree on the far side of the river!): 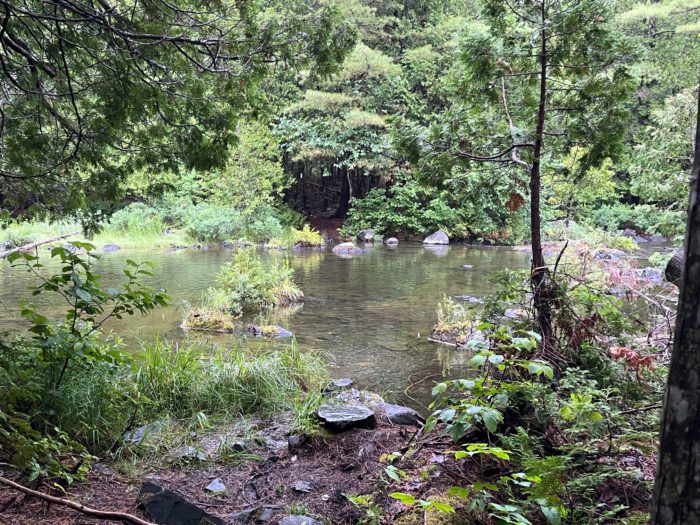 What it boiled down to was that I was encountering my first river fording of my trip.  The typical way to cross rivers on the AT is by rock hopping, but in Maine there are rivers which you must wade through.  That involves taking off your boots and socks, putting on your water shoes or Crocs, and wading across.  You then reverse that process on the far bank after toweling off.  The water does usually feel refreshing, but the whole production usually takes 15 or 20 minutes.  This crossing was thigh-deep but fairly tame in current.

As I continued down the trail, there were numerous beautiful waterfalls like this one: 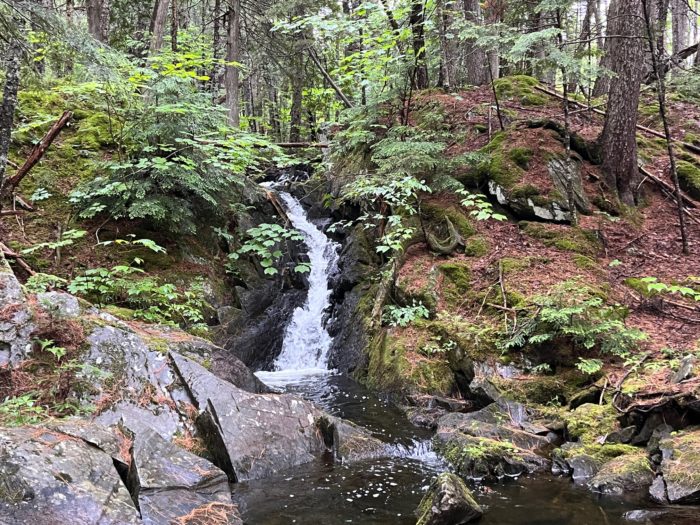 And next came a mandatory canoe ride to cross the Kennebec River, which is too deep and dangerous to ford safely.  Here’s the dedicated canoe pilot helping a hiker into his boat after I had completed my short ride: 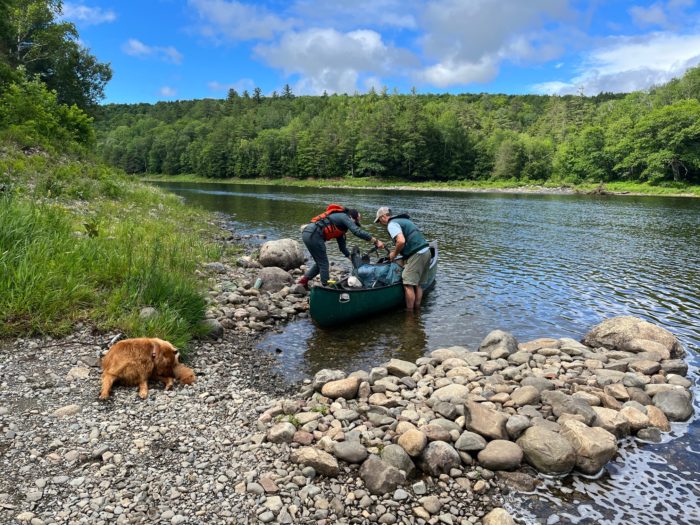 So what better place to have lunch on that watery day than Pleasant Pond? And it’s sure nice to have your own dock to enjoy the view: 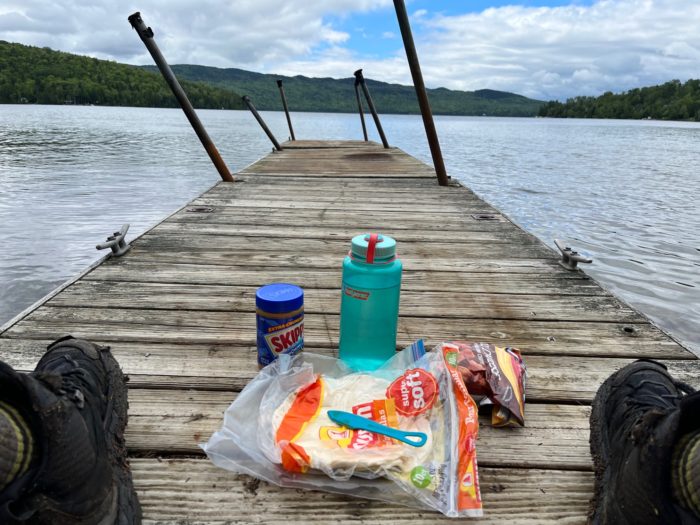 After a bit of a challenging climb over the open ledges of Pleasant Pond Mountain, I found myself in some high ceiling forests.  With the numerous large boulders and the very tall trees, at times I was feeling a bit Lilliputian: 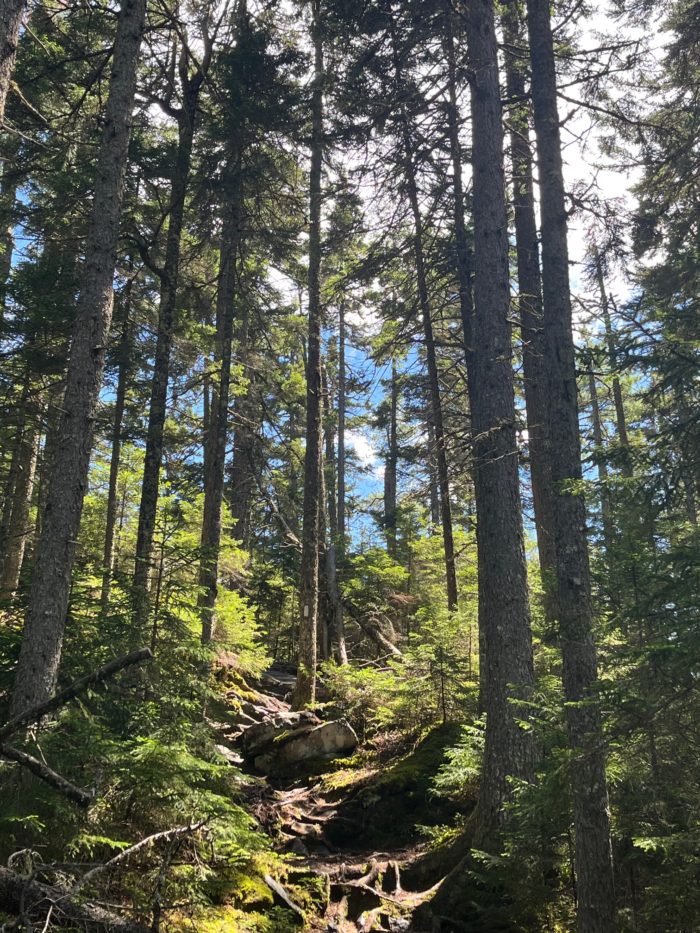 Over one more wide open peak – and into the hamster wheel

I started Day 78 with a steep climb up the aforementioned Moxie Bald.  There were some incredibly interesting rock formations to walk through on the way to the summit: 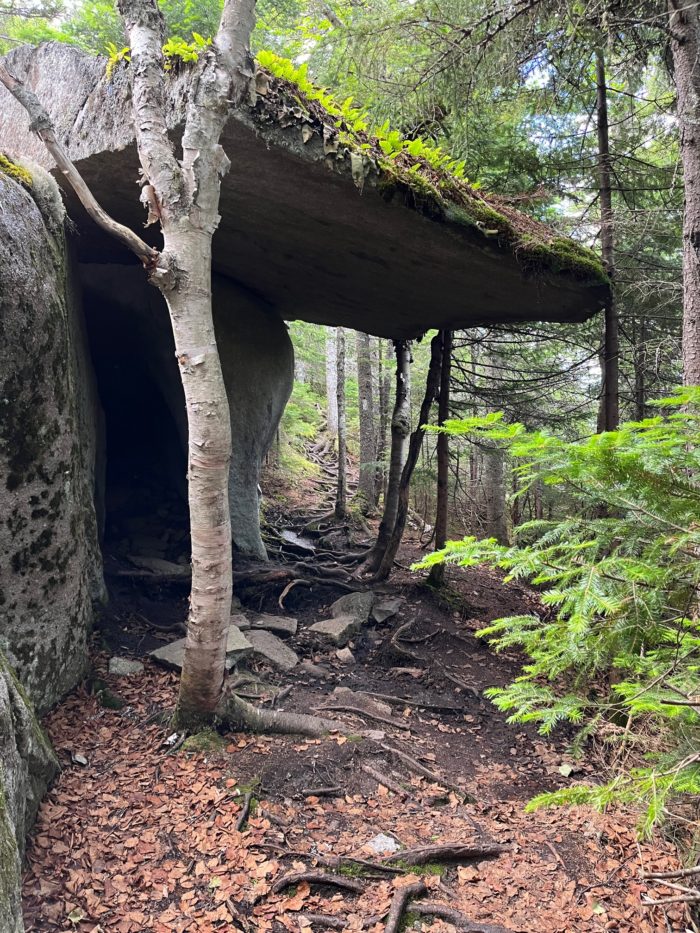 As well as some really nice views of the Crockers and Bigelows that I’d climbed over three days ago: 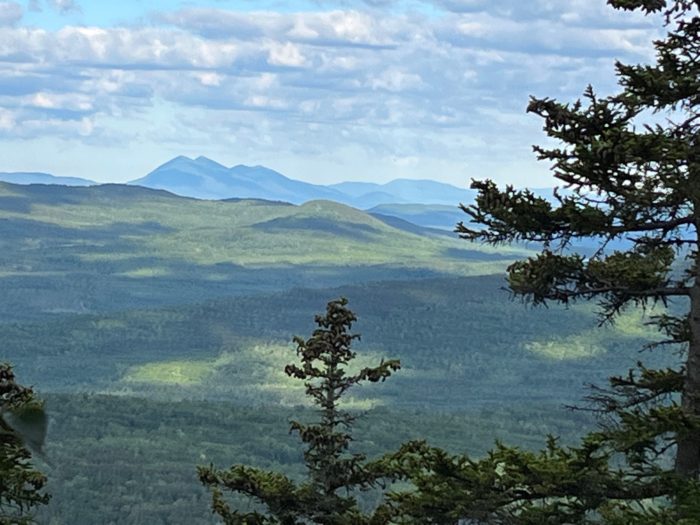 But after that energizing start, Day 78 would turn out to be one of my least favorite AT days thus far.  A few miles further the trail would cross a couple of nearly waist-high mudholes (yuck!) that required fording, and brought me beside a swiftly moving river.

Sound lovely?  It really wasn’t – this particular branch of the Piscataqua River was filled with grey/black stones, making the water look black.  Reeds grew between the trail and the river, creating another barrier.  The AT would follow the left side of this river for nearly five miles, up and down ridges.  At most times I found myself walking at an angle against the slope.  At such a low elevation, the air was hot and the bugs were everywhere.  The trail always seemed to be circling to the left, giving an endless “hamster wheel” effect to that afternoon’s climb.  Those five miles felt more like twelve.

I was overjoyed to emerge from that trail section (after one more river fording) to a road that would bring me to Shaw’s Hostel in Monson – my home for the next two nights.

Shaw’s — a beehive of activity with a frat house vibe

I found Shaw’s to be efficiently run and incredibly active.  What’s not to like about a place like this?: 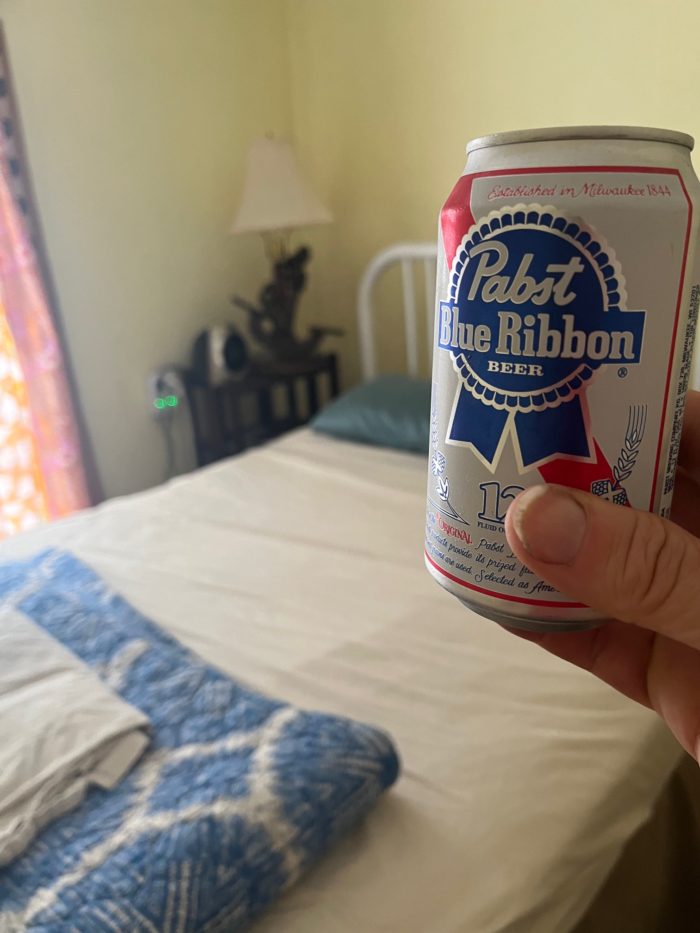 The vibe at Shaw’s was a very cool “do your own thing” one.  Some hikers sat in groups sharing conversation, beer and food.  Others used some of the exercise equipment or cornhole boards in the yard.  Many others scurried here and there doing laundry or getting their showers.  There might have been twenty-five people staying at Shaw’s that night, but the constant flow of activity made it seem like more.  I did manage to sneak out early morning to get a rare picture of the premises when it was empty: 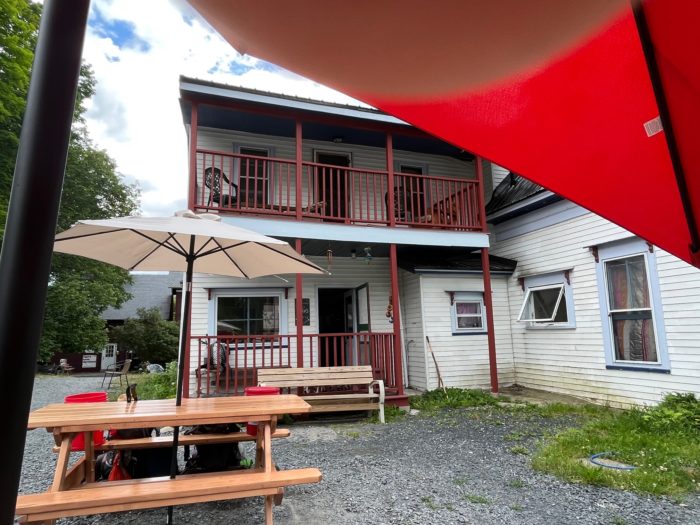 I’d use my zero day here to get some rest, replenish my supplies, drink a few beers, and enjoy town food like pot roast and beef brisket.  I’d also visit the ATC Visitor Center and get information on the 100 Mile Wilderness and the details of a Katahdin stay.  All of that was coming up quickly as I was fast approaching the northern end of the AT!