AT Days 8-11: From full recovery mode to full privy

After logging 120 miles in my first seven days on the AT, I was physically beat up.  In Duncannon PA I’d take my first break before hitting the trail again.  Here’s the four day summary:

Local birds usually provide the alarm clock at a shelter just before sunrise.  This was the case on Day 8 at Cove Mountain.  A whip-poor-will broke the silence with a ringing solo that was already going for two minutes when Mega stirred.

“What the hell is that?”

I laughed out loud.  “You obviously don’t have whip-poor-wills down in Georgia.”  No reply.

When the relentless bird finally broke off his song Mega grumbled “Is it done?”

”Not a chance” I replied.  About 20 seconds later our new bird friend cranked up his signature call once again.  I smiled.

When I hit the trail that morning it became clear that my decision to cover extra miles yesterday was the right one:

Duncannon is one of a few Appalachian communities where the trail literally goes through the town streets.  Trail Laundry was my first stop.  A couple of townspeople finished up as I got quarters and detergent, leaving me alone with this radio cranking a classic rock station: 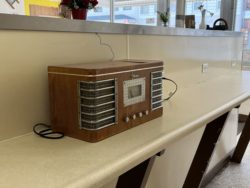 The DJ or robot picking tunes must have known a Massachusetts guy needed some music.  The next two songs were from Boston-based artists:

And then that faceless DJ uncorked REM’s “Losing My Religion”.  I not only consider that to be one of the best alternative rock songs ever recorded – I think that it’s as close to a perfect song as there is in rock.  The music, the lyrics perfectly wrapped in a seamless flow from first note to the last.  (And that mandolin – awesome!) Having sung that song multiple times in karaoke I went full vocals and rocked it!  That was definitely my Day 8 MMM (Most Memorable Moment)!

Yeah, the young guy that walked in as I was shredding a Guns N’ Roses air guitar solo thought I was a bit odd.  But aren’t most of us on this 2000+ mile journey by foot just a little different?

In the hotel room

After polishing off a whole pizza at Sorrento’s I checked into my room.  My home for two nights was the Doyle Hotel, a historic wooden structure.   Rehab work was in progress as I checked in, but the room was adequate for a hiker’s needs.  There were certainly some quirky things, like this flaming gas heating unit installed in the wall of each room.  I’m no expert on fire codes, but doesn’t this seem like a very bad idea? 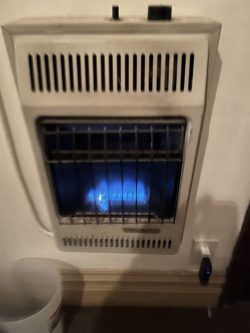 At this point I just needed to heal my lower legs. (I’ve spared you the gnarly photo.) My right leg was inflamed knee-to-ankle and shapeless.  My left ankle bulged, swollen in a minor sprain.  They say that thru-hikers get their trail legs in their first few weeks.  If these were mine, I wanted to send them back for a refund.

There is little more to say about the next two days.  Everything was rest, ice, compression, and elevation.  In fact, my day 9 MMM was my purchase of this 8 lb. bag of ice at the mini-mart.  A big thank you to Trailangel Mary for shuttling me to the food store that day as well! 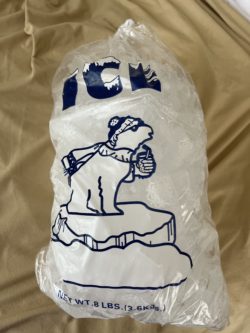 When day 10 arrived I looked down at my legs and thought they looked “almost normal”.  But was I OK to hike?  I recalled an interview with NFL legend Emmitt Smith, who had some epic games while injured.  When asked how he did that at less than 100%, Emmitt said “Let’s be clear – after you play a single game as an NFL running back, you’re not at 100%.” I wondered if the same adage applied to hiking an entire week on the AT.  And so I started lacing up my boots.  My goal for the day would be to simply not re-aggravate things.  As such, I’d plan a shorter 11 mile day.

The trail resumed with a sidewalk tour through the rest of Duncannon, then across dark rivers on old bridges shared with noisy truck-filled highways.  Emerging from this chaos, I soon found myself high on a ridge again.  The walk up here was pleasant with sun, breeze and views in both directions. The Juniata River flowed on my left, and the Susquehanna River drifted off on my right.  At a view point under some power lines I had my day 10 MMM: 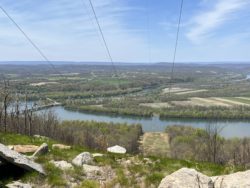 And although the view was beautiful, it was memorable because of the thought I had as I looked out:

”The view is always better from the high road.”

I was setting my eyes upon the same crumbling bridges, noisy roads and murky waters I’d seen close up – but now they were pieces of a beautiful collage.  My synapses fired away on this thought, thinking metaphorically about how we view others, our communities, and our world.

OK – for all of you readers to move forward together we must take a step back.  Some of you may not know what a privy is.  Let me explain and illustrate.  A privy is a trail toilet found at shelters.  Here’s an example of one in Pennsylvania: 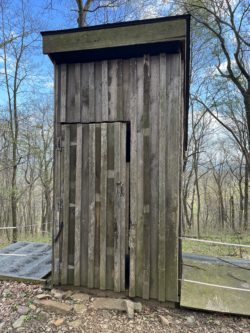 Most privies use wood chips or lime to break down human waste into compost.  If both the hikers and maintainers do their part, they are quite efficient and useful.  Up to this point in my AT trek, I’d always had a privy nearby when nature called.

After I arrived at Peters Mountain Shelter feeling good physically, Tadpole alerted us that the privy was full.  Perhaps the only thing worse than finding out that a shelter privy is full is being the one who finds out.  Many hikers have already made up their minds upon opening that door that it’s “all systems go”.  So the scene can get pretty gruesome.  And it brings a whole new meaning to “playing above the rim”, hoop fans, now doesn’t it?

On the morning of Day 11 I awoke just before 6am with nature calling.  Or more specifically, Sphinctus, trail god of the bowels, was calling.  Oh God – full privy!  I grabbed my titanium trowel and TP to find a place to go. (That’s right, I have a titanium trowel that weighs a mere 0.6 ounces. It’s a marvel of modern technology!)

Enough bathroom humor for you, dear reader? If so, then you have the option to skip the next paragraph describing a desperate man sh*tting in the woods.  But these details should be shared!  As an AT blogger I feel that it is my duty to educate and enlighten you on the ways of the trail.

So – first issue, where to go?  The shelter and the trail overlooked the flat area, which was just starting to bud.  There was NO cover at all.  The rest of the area was sharply sloped, but it would have to do.  I deftly wielded my trowel making a 7-8” hole, about bowl sized.  Then I steadied myself on the nearly 45 degree, rock- filled slope, squatted … and missed the hole.  But cut me some slack here  – this is not a skill I’d practiced for my hike.  And how exactly would you practice this? In your basement with a litter box?  Out in your sloped backyard?  Now fellow Leave No Tracers rest assured I rectified the situation. Pulling inspiration from bakers clearing flour from their workspaces with a scraper, I seized a narrow limestone block.   Soon the far flung feces were in the hole, ready to begin decomposing safely.  Now, do you feel educated and enlightened?

My trail adventure that day would cover 18 miles through some of the greenest deciduous forests I’d yet seen.  Birds were plentiful and vocal: warblers, veeries, sparrows, and so many more. Even the ground cover was thick, in particular with colonies of mayapple plants, which I’d never seen in New England: 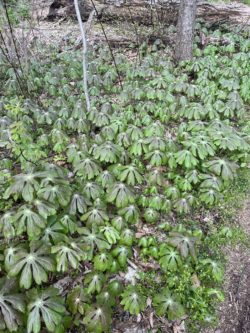 After a painful twist to my left ankle, I felt like I could maybe handle only three more hits like that today in that spot.  I pictured the 4-peg Destroyer ship from the Battleship game: one red peg in, three empty holes.

Rain set in around 1:00, as did an ongoing series of blasts that sounded like artillery fire.  After each initial boom, a second more powerful blast came 10 to 25 seconds later.  These occurred over and over.  The noises were absolutely jarring and unpleasant- but so impactful that they were my MMM of day 11.  I’d later find out that it was indeed artillery being tested at the Fort Indiantown Gap Army training base.

Somewhere along the 18 mile route my mind pulled in Bob Seger’s “Turn the Page” lyric “When you’re ridin’ 16 hours and there’s nothin’ much to do”.  It’s one of the challenges he notes in a beautiful song that also speaks to his love of performing music. It’s clear that we thru-hikers can relate as we face daily struggles doing something we love. I thought it was appropriate to have a thru-hiking version, so I used trail time to come up with this:

Here I am, on the route again

There I am, bustin’ my tail

There I go, hiking the trail….

And – ouch!!  No more than a minute after working out those lyrics I sharply twisted my left foot.  Red peg number 2 in that ship.  But the rest of the day would go smoothly. As I pulled into Rausch Gap Shelter, seeing numerous familiar hiker faces, I’d persevered. I felt I could build off of this episode to face the many miles and challenges that lie ahead. 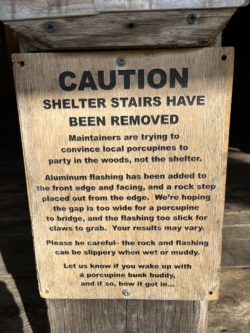 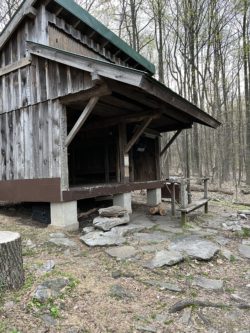 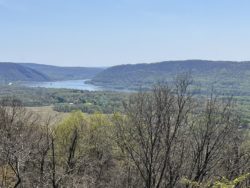 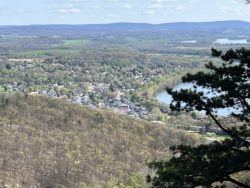