With the first half of my AT flip-flop hike complete, I’d now head southbound (SOBO) from Harpers Ferry.  The contrasts to Maine would be immediate and jarring.  Travel and rest at home would take up four days out of the five.  Here are the details:

You may think that the title of my blog post is clever wordplay on a line from The Wizard of Oz.  But no – it’s actually my way of alerting those big dogs of 80s rock, Toto the band, that I’m no longer in Maine.  And if they should add some US dates to their current tour (I kid you not – they are currently touring Europe) they should consider venues in Harpers Ferry and southward. I’d definitely go to see them!

I’ve often wondered why Toto has never ascended to ultra-legend status in the rock world.  Was it the mental picture of that little movie dog each time we heard their name?  Was it the lack of an umlaut over one or both “o”s?  Let’s face it – everyone wanted to scrawl “Blue Öyster Cult” in the 70s and 80s because of the umlaut!

Apparently none of the members of Toto had ever been to Africa before releasing that track.  That’s like me writing a song or creating a blog post about Portugal.  Which is a great way to segue into the fact that I think that Portugal The Man’s “Feel It Still” is one of the most well-produced rock songs I’ve ever heard.  Do yourself a favor by grabbing some headphones to listen to variety and timing of the percussion beats and fills on that track.  Brilliant!

Riding the bus from Maine

Virtually our entire Katahdin summit group stayed at the AT Lodge in Millinocket.  Most of us morning-shuttled to a bus in Medway bound for Bangor, ME.  And after many days together we parted in quick minutes with buses and planes to catch.  My view would look like this for the next four hours: 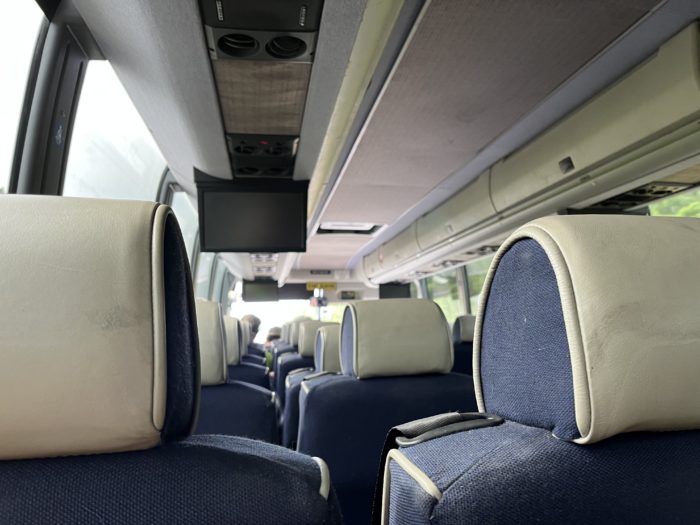 My only hiker companion on my bus ride south was Straps, and perhaps that was appropriate – since I’d known him longer than all of the others.  We met setting up our hammocks on a ridge outside Palmerton, PA and crossed paths many times through Katahdin.  In Maine we hiked a lot of hours together.  He showed tremendous maturity and wisdom for a 19 year old hiker, and I wish him all the best this fall at Auburn University.

Back at home, back to the scale

Longtime blog readers may recall that I lost weight at an alarming initial rate on the AT (17 pounds in 39 days).  Since that point I’ve bulked up meals and snacks and I eat gobs of Fritos – but I knew I was still dropping pounds through Maine.

The official Morrison bathroom scale told me I had dropped 24 pounds.  A slower loss rate, but still a loss.  I had to use my home days to gain some bulk back.  My wife’s home cooking was a great start, but I needed more.

Beer is a great source of calories!

Of course I did not hesitate to turn to beer to get my calories.  My good friends Mike D. and Rob P. generously shared a number of delicious ones with me.  Here’s a list of all the different beers I enjoyed between Katahdin and Harpers Ferry:

Surprisingly the highest ranked of these beers was The Veil’s juicy DIPA from VA which I found at a Massachusetts craft beer joint!  I’ll be looking to find this again down south as well. 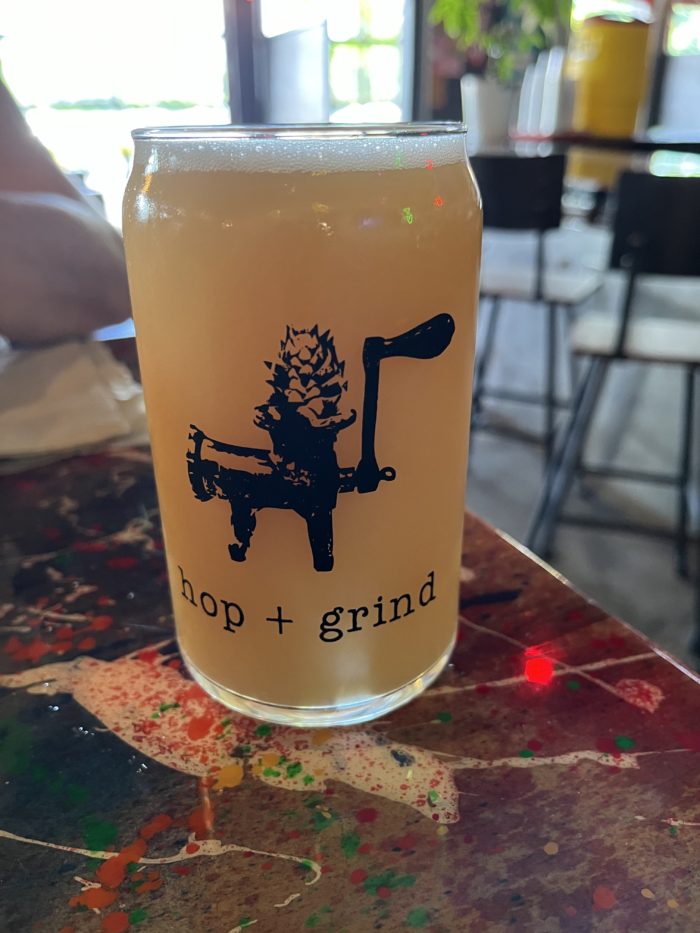 If you want to see all of my comments and ratings on these beers, friend me on Untappd (eddy_topper is my username).

My train schedule on Day 90 to reach Harpers Ferry was virtually identical to my April trip – but the similarities ended there. Last trip I had another thru-hiker sitting in back of me and I met two more by the exit doors.  This time there were no others, and nobody asked about my pack.

Because I couldn’t get a space at the hiker-friendly Town’s Inn, I had to schlep a mile in the heat to the remote Quality Inn.  I then discovered that there was not an open restaurant within 1.5 miles – leading to a Seven-Eleven meal that night. Oh well – it still topped trail cuisine.

Almost immediately it was clear that the South was going to be vastly different from my recent time in Maine:

First of all, the forecast predicted five straight days above 90 degrees!  I’d had only two hiking days during my 86 day northern leg at that temperature level.

Secondly, the desk manager at the Quality Inn called me “honey”.  I was definitely in the South!  I’m pretty sure Maine wives don’t even call their husbands “honey”.

Third, I saw a turkey vulture circling overhead as I departed the hotel that morning.  Last time I saw one: in Maryland in April.

Finally, while waiting for the ATC Visitor Center to open, a young college age male gave me a “Know God” pamphlet.  I thanked him, explaining that I was an active Christian.  But I knew I was definitely in the South!

Once I got my boots moving I discovered the soil was incredibly dry – and it sparked a memory.  When the train pulled in the prior night the conductor noted that she’d never seen the Potomac River so low.  Was water going to be an issue? It hadn’t been so in my northern leg.

Instead of black flies and mosquitoes I heard buzzing cicadas in the trees as I became drenched in sweat scaling the steep incline to the ridge.  It was SO HOT!  (Toto would probably say it was “Africa hot” – but I’m not trusting their opinion!).

And what were these in front of my feet -Pennsylvania rocks?? God no, not the dreaded pointy stones again! 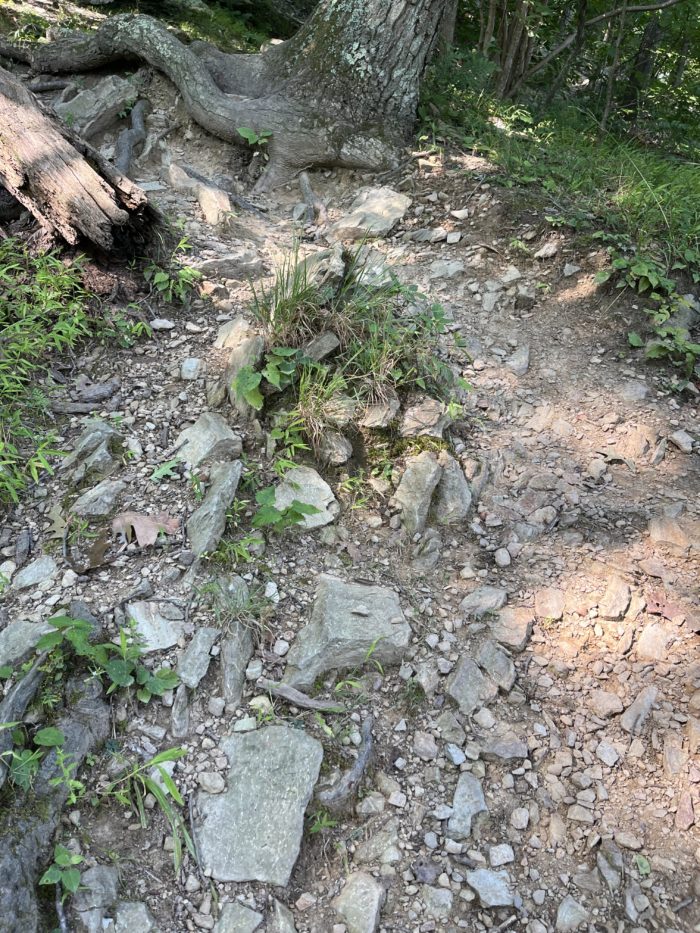 The ridge ultimately alternated between smooth and rocky – what terrain would win out going forward SOBO?  I had a similar question about the heat, as there were a few cool green spots higher up.

Next I found myself staring directly into the face of a black snake in the trail.  Oh yeah, these again…. wonderful.

Fortunately my lodgings for the night turned out to be simply awesome.  Blackburn Trail Center, run by the Potomac ATC, is a beautiful old cottage in a wonderful green setting just off the AT.  My two favorite amenities:

Add in two very friendly caretakers handing out soda and goodies and all was great! 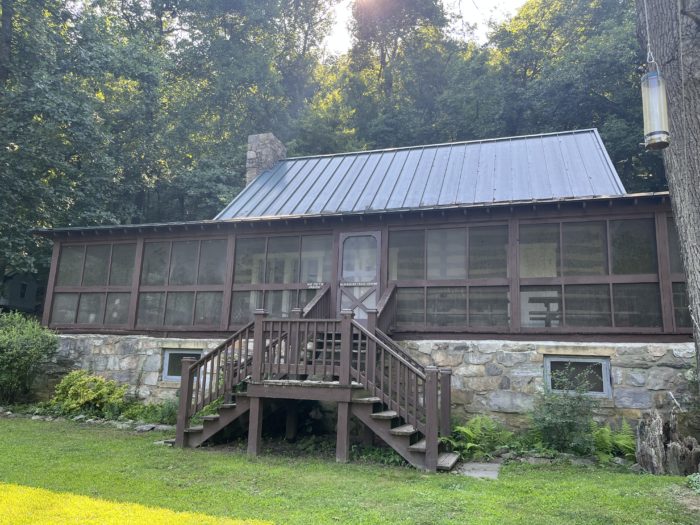 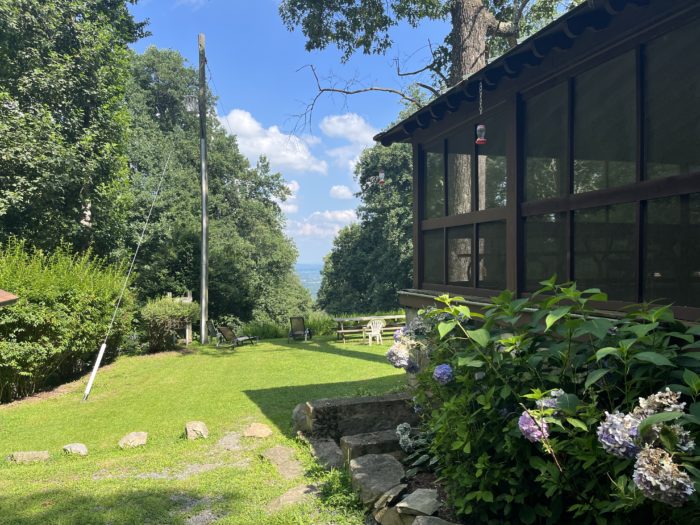 And so I was on my way towards Springer Mountain, Georgia!  Things looked like they’d be a different on this SOBO leg – but that’s all part of the adventure.