The community center is several miles away from the trail, and Jackrabbit and I knew it would be a tough hitch back to trail. Eventually, a car pulled over and offered to take us back to trail. The occupants of the car introduced themselves as Fenway’s parents; I have been leap-frogging with Fenway on trail since Duncannon so it was very cool to have the chance to meet his parents. They dropped us off and sent us on our way with gatorades. The temps were predicted to be in the 90s today; day one of a four day predicted heat wave that was set to dominate the US.

We didn’t start hiking until just after 9 AM, so we decided that a campsite 17 miles away was a solid goal for the day. Massachusetts doesn’t allow any stealth-camping, so it was either a 17 mile day or a 29 mile day. Given the heat and start time, 17 miles seemed like the more realistic option. We ascended up to our first ridge of the day, and soon caught up to Fenway filtering some water. We told him how awesome his parents were, and we all agreed to meet back up later at Shaker Campsites. From there, the ridge walking was very enjoyable despite the heat, and I caught some views of Mt Race and Mt Everett on the horizon line.

There isn’t a whole lot to report on in terms of the hiking today; we remained in the green tunnel on the first ridge with the occasional short bursts of ups-and-downs. The heat was intense; and I was soaked with sweat early on. We descended off the ridge down to MA Route 23, and climbed up another ridge which contained very similar terrain to the first one. There was plenty of water on trail today thankfully, and Benedict Pond was the perfect spot for a short break before descending down to Shaker Campsites.

The sites were nice, but the bugs were horrendous. Mosquitos were out for blood tonight and I got attacked the instant I arrived. Jackrabbit was already there, he earned his trail name for a reason. Fenway arrived not too much longer after me. We only hung out briefly before calling it an early night to hide from the swarm of mosquitos infesting the site. 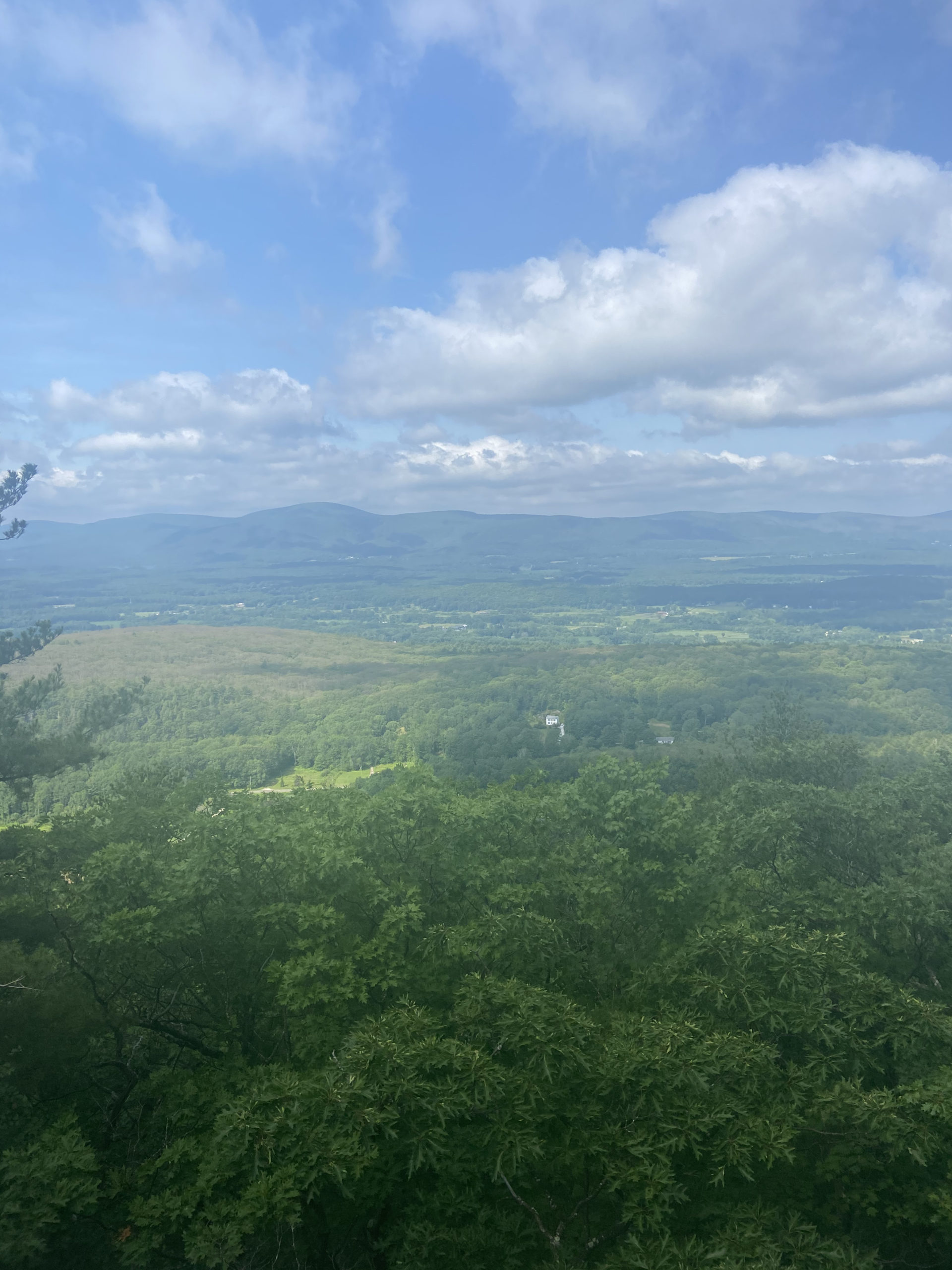 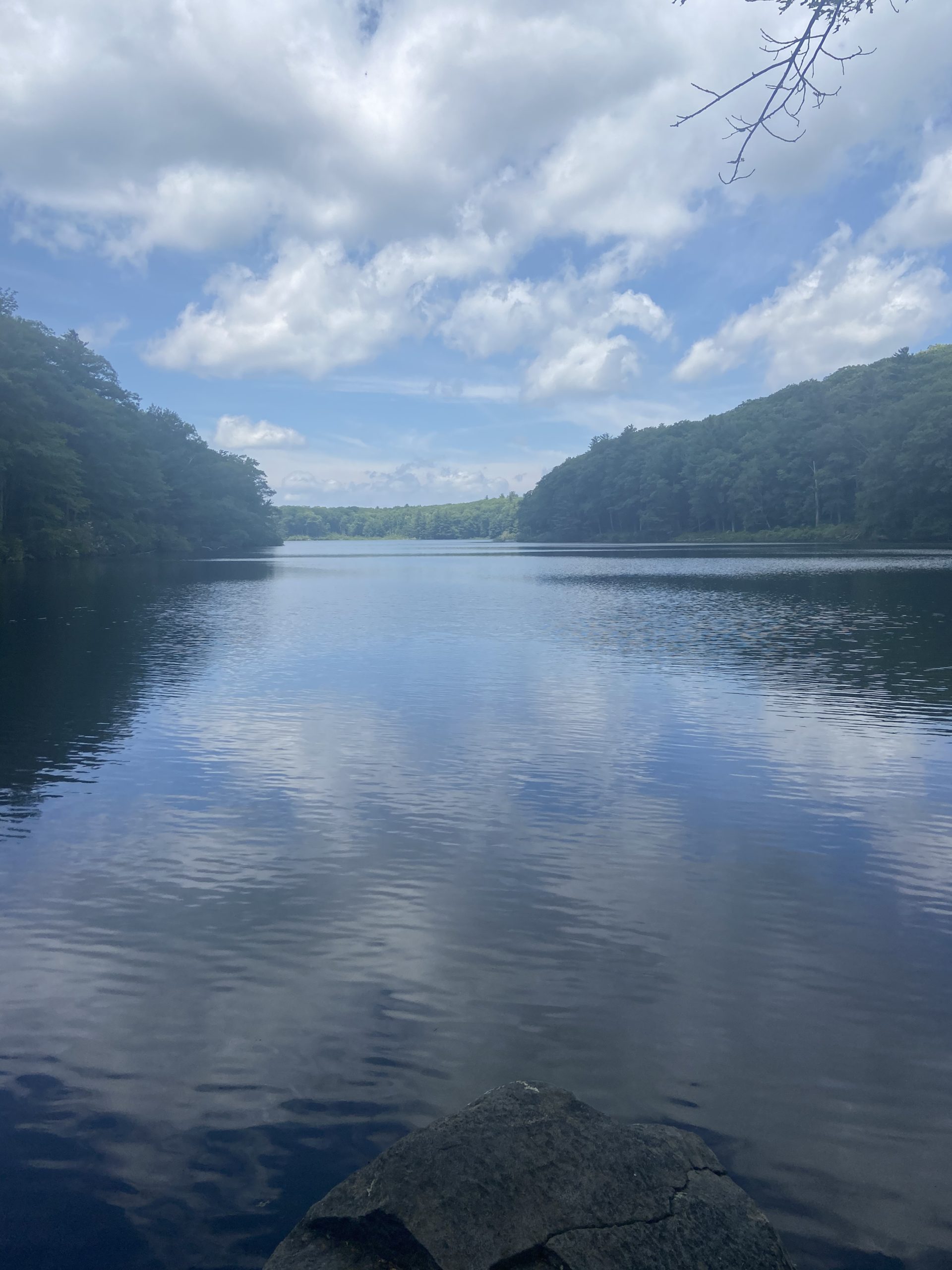 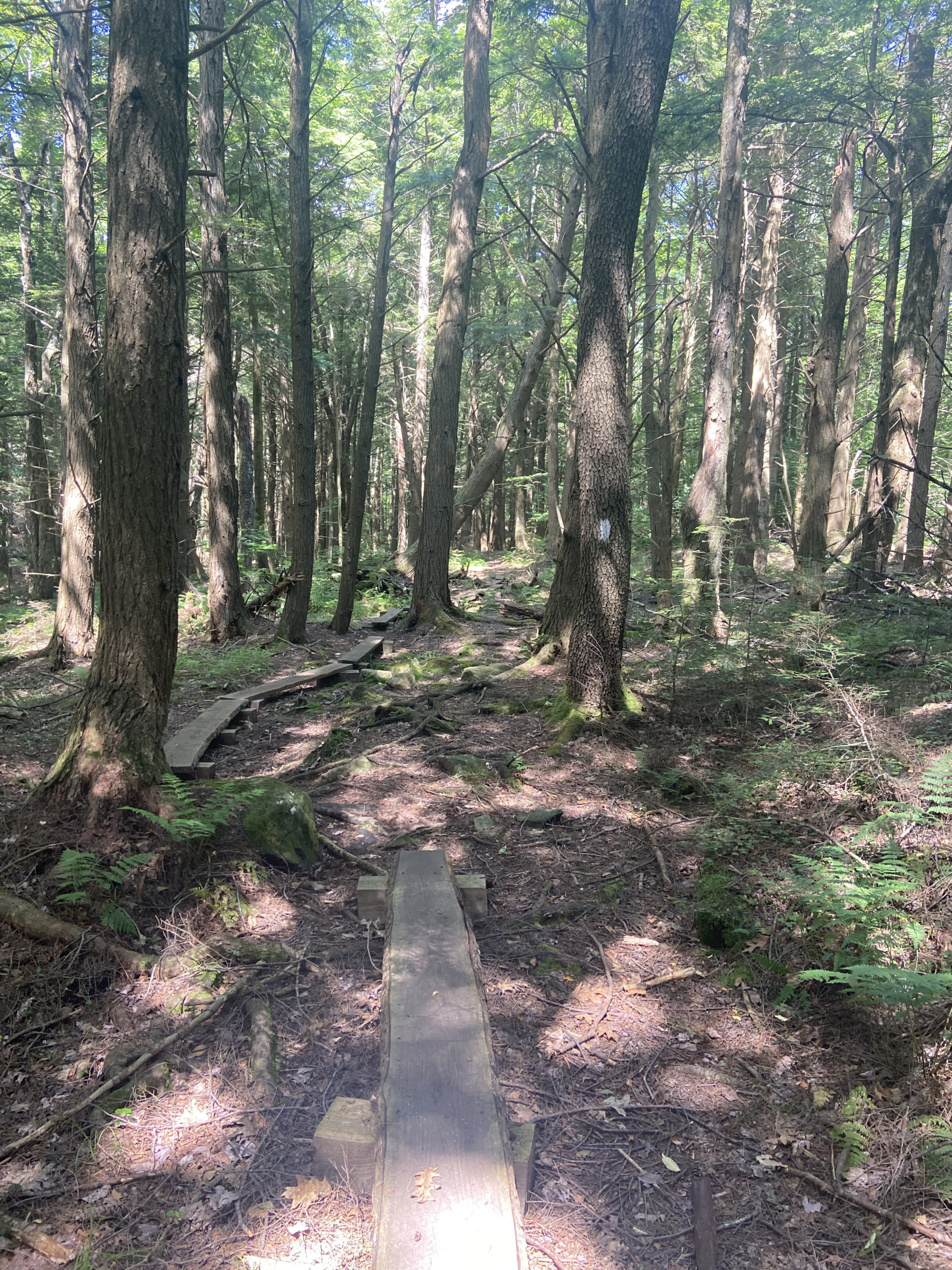 The mosquitos instantly attacked me as I stepped outside my tent to begin my morning routine. I was on trail in a flash to out hike the bugs. The AT soon leaves the woods and goes through exposed, grassy pasture walks for about half a mile. It was only 8:00, and the sun was already ruthlessly beating down on me. It was to be hotter than the day before.

The trail soon returns to the shaded woods as I climbed Tyringham Cobble through more hemlock forests. So far Massachusetts has had several hemlock forests walks which is a great change of scenery; a sign I was making progress North. The next 10 miles remained on the same ridge, very similar terrain to the day prior. I caught up to Fenway at Upper Goose Pond, which was more like a small lake than a pond. He told me that his parents were setting up trail magic down at US Route 20, about 5 miles away.

We descended the ridge where his mom was waiting with a plethora of much need beverages and snacks. I downed a gatorade, several watermelon slices, and cookies which all added some much needed fuel for our next climb up Becket Mountain. I was so thankful for Fenway and his mom for the trail magic, which came at the perfect time on my hottest day on trail yet.

The climb up Becket Mountain flew by and we arrived to the shores of Finnerty Pond, the perfect place to go for a swim and chill for a bit. We only had 6 mostly flat, cruisy miles remaining to Blueberry Hills Farm, aka “The Cookie Lady” according to Guthook. Blueberry Hill Farms was literally right off trail, and is an oasis on a hot day like the one we experienced. Upon arrival we were instantly offered cookies, ice tea and blueberry smoothies fresh from their garden. They let us tent on their large property, all donation based too. We went from sweating buckets climbing up a mountain to lounging on lawn chairs with smoothies within a span of a couple hours. It’s funny how things seem to work themselves out on the AT. 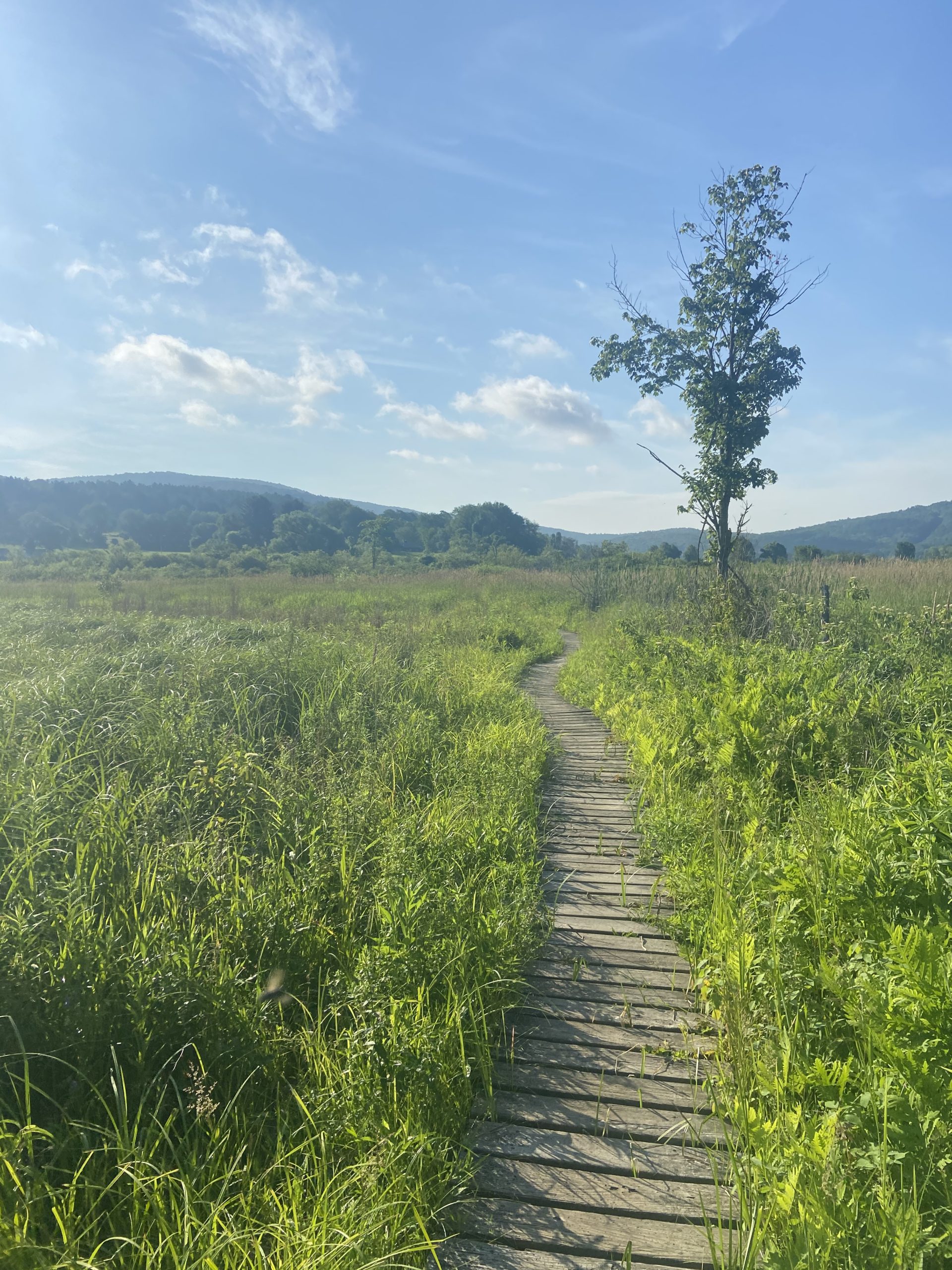 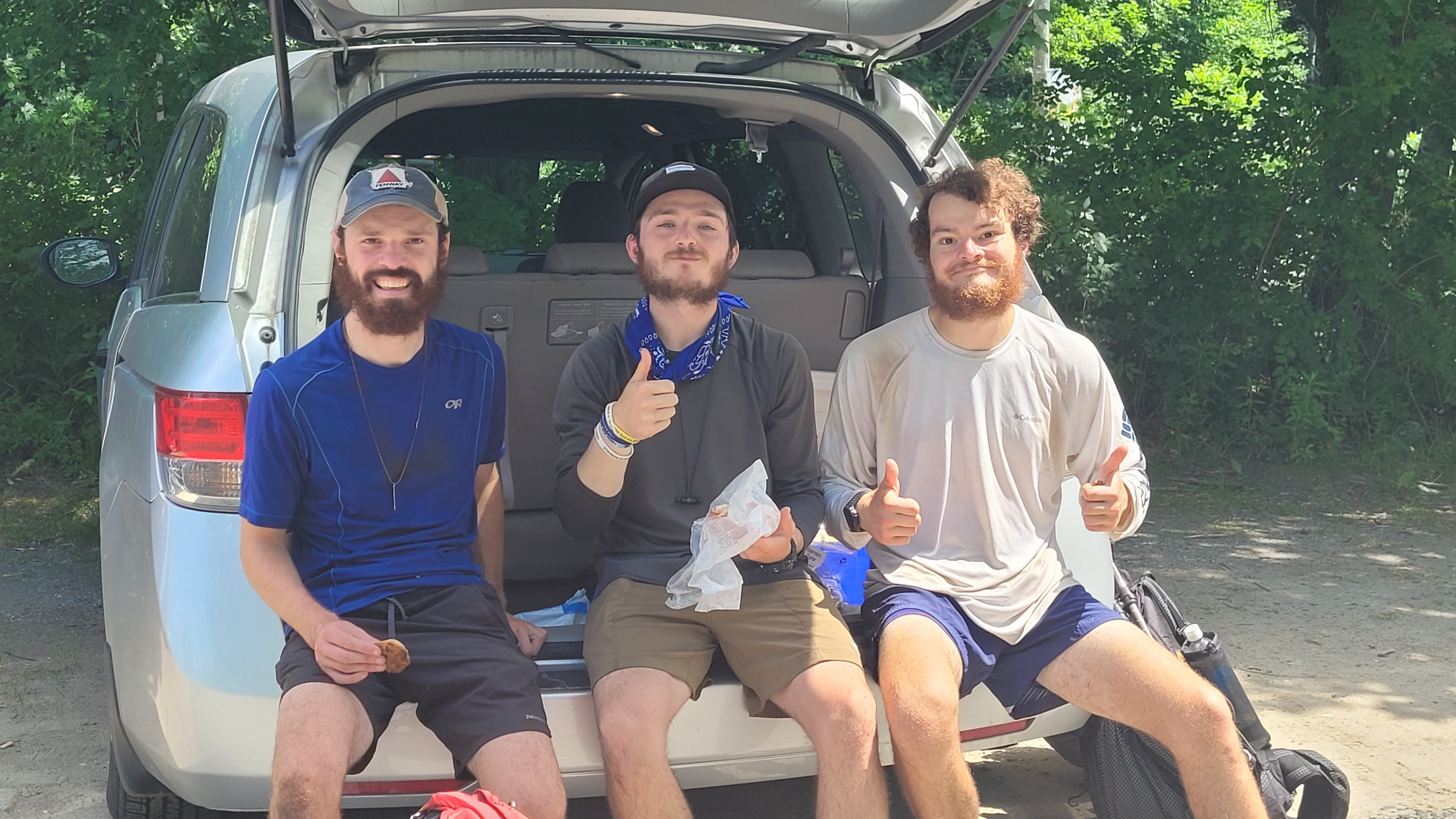 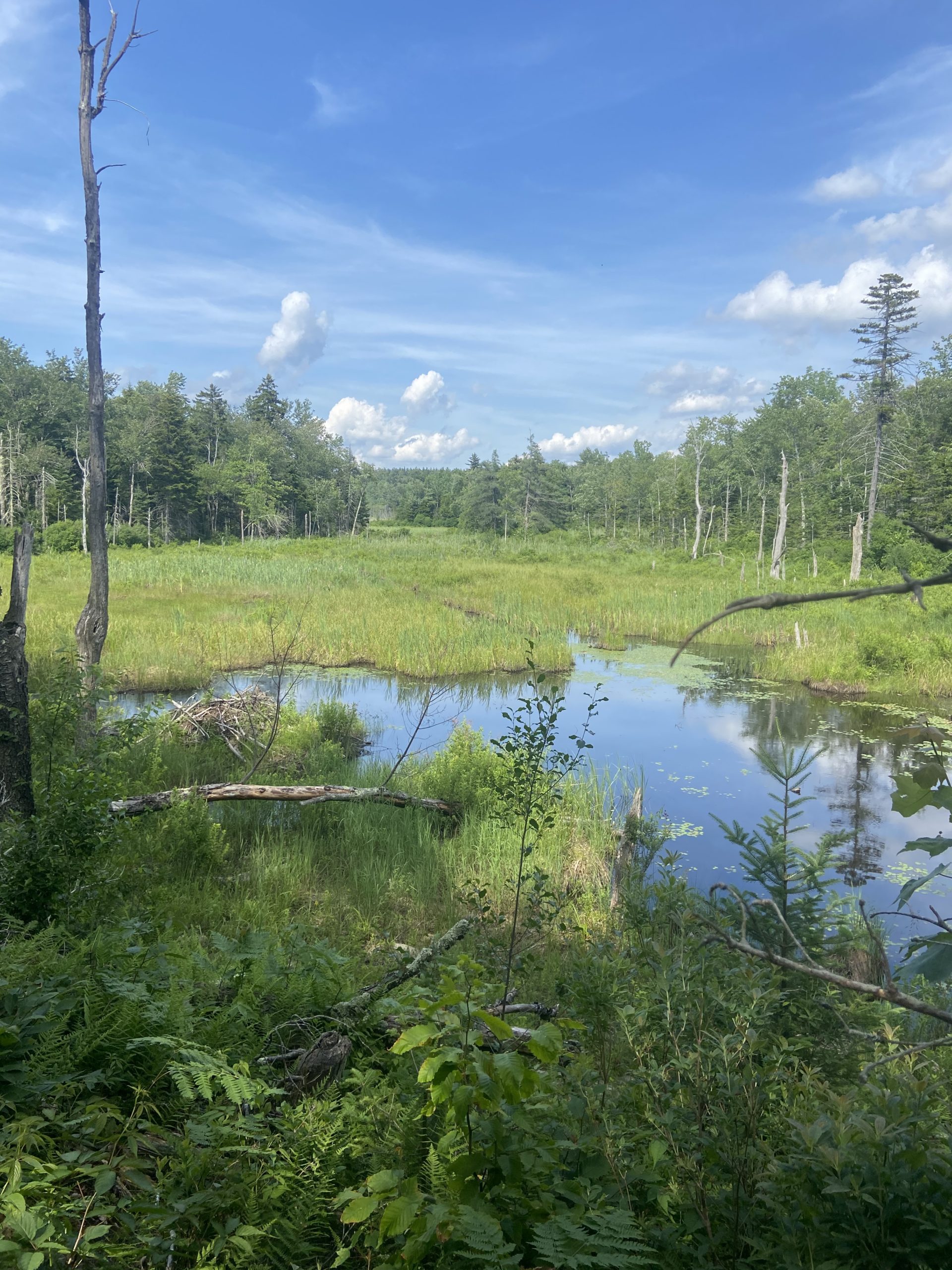 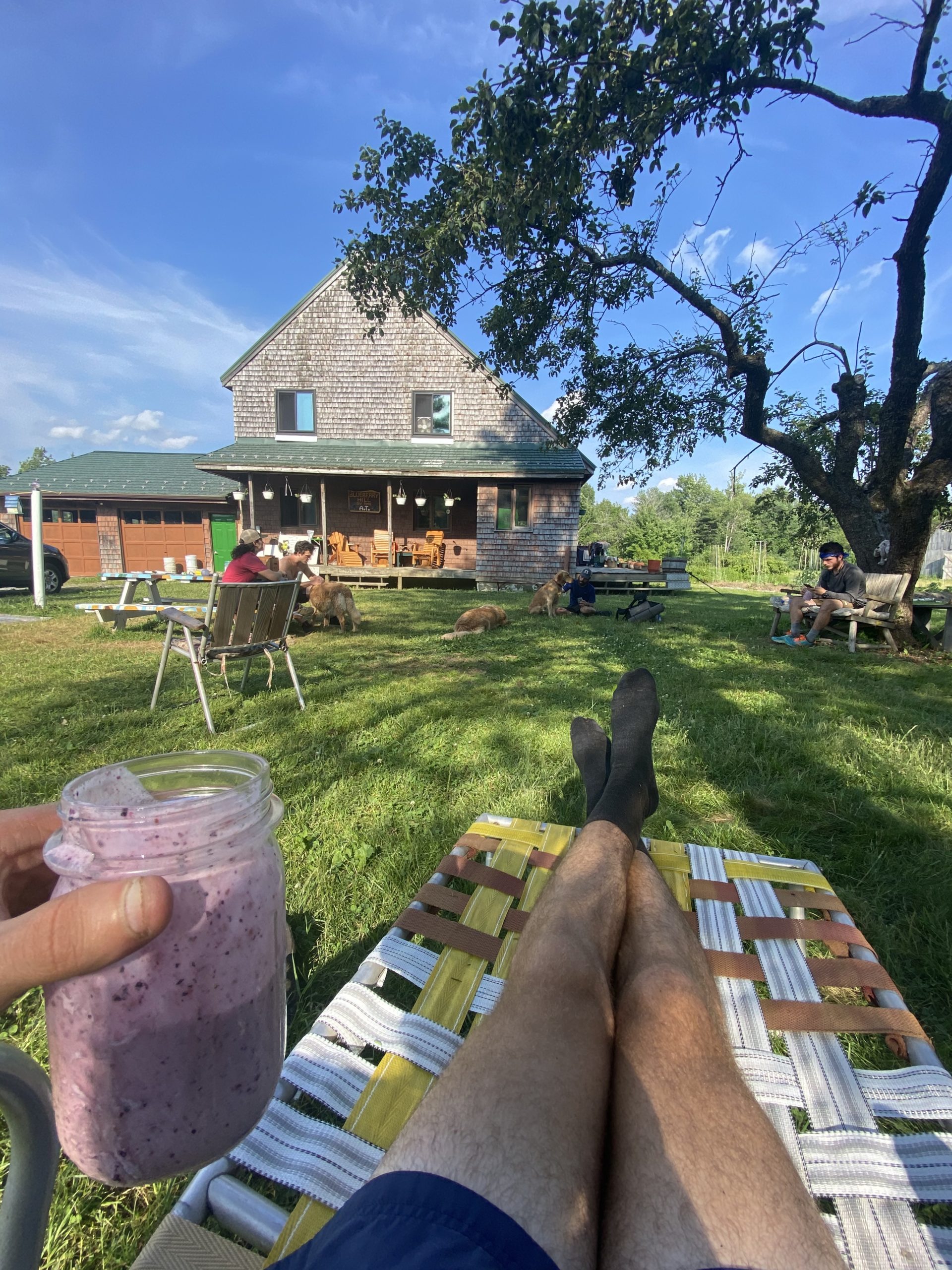 I was awake early to a nice sunset visible right from my tent. Once the sun was up, the temperatures quickly rose to 90 degrees again, day number three of the heatwave. I began reading about triple digit degree temps that were also rattling Southern California and the Northwest.

The first several miles remained flat on the ridge, reaching the top of Warner Hill, before descending down to the town of Dalton. The AT runs directly through the town for over a mile. I stopped at Angelina’s Subs where I found Fenway enjoying lunch and the A/C too. Fenway and his parents invited Jackrabbit and I to spend the night at their home that night, and I was stoked for a much needed shower and some good food.

I hung out in Angelina’s for well over an hour, and had to give myself a serious pep-talk to walk out of the A/C and back into the heat. There were only about 8 miles left to the town of Cheshire, where we were all going to reconvene. I walked about a mile on a sidewalk past several homes before returning back into the woods. At the trailhead, a local offered me a gatorade before my upcoming climb which was super clutch.

It was a short but steep climb up the ridge, where the trail remains for about 5 miles, passing through more oak and hemlock forests. Descending into Chesire, I took a very brief side trail to The Cobbles Lookout, getting an awesome view of Cheshire, Adams, and Mount Greylock. Mount Greylock is Massachusett’s highest peak at just over 3,400 feet. We’d be tackling that beast the following day.

In Cheshire, I resupplied at a Dollar General close by, where Fenway and his mom picked me up. We scooped Jackrabbit in town on our way to Fenway’s home in nearby Adams. Just as we arrrived at his home the sky opened up and a brief but intense thunderstorm came down. It passed and we hung out enjoying a home cooked meal and some beer as we swapped stories from trail with his family. I am always continuing to be blown away by the generosity of the people in this community. 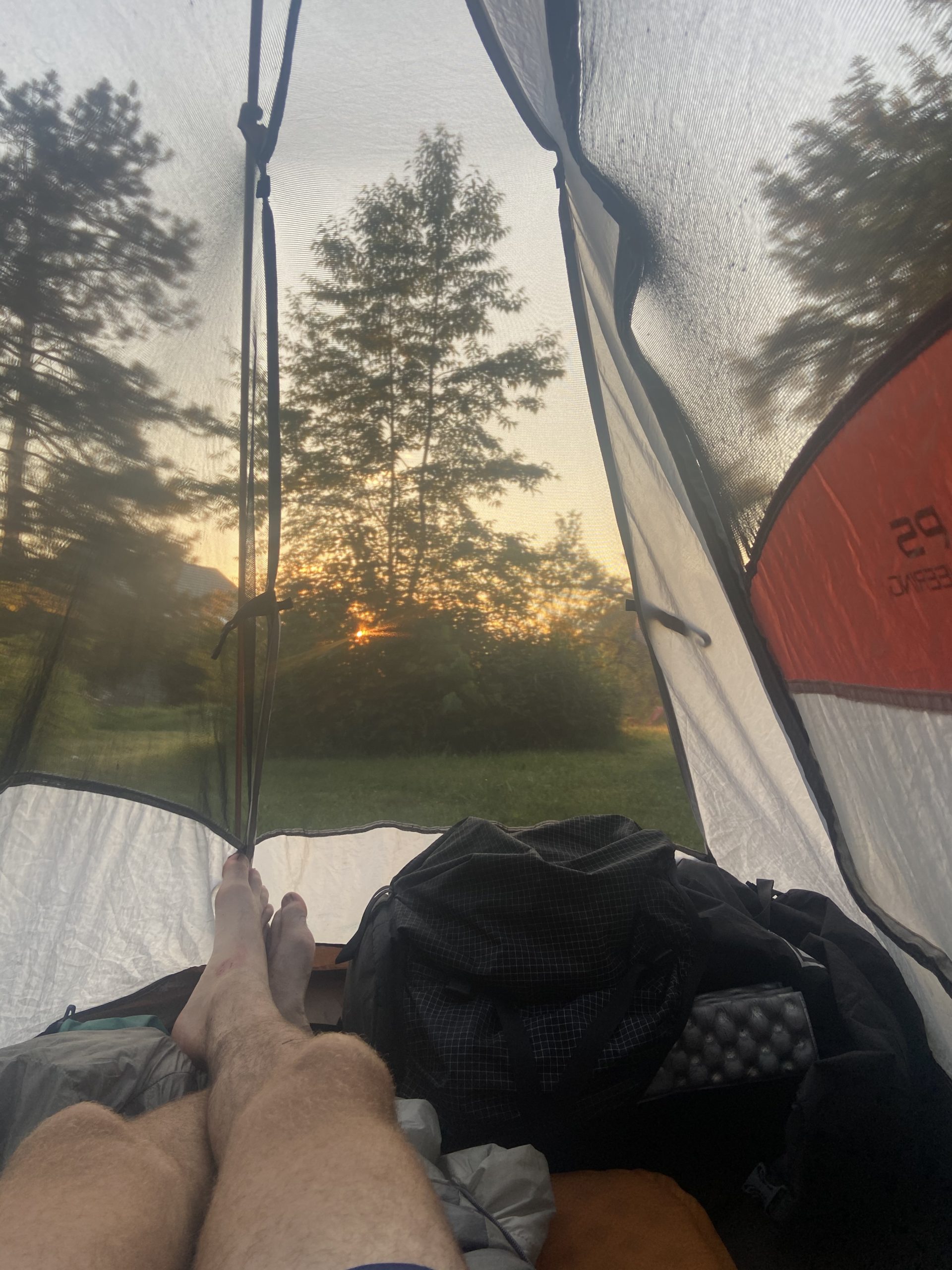 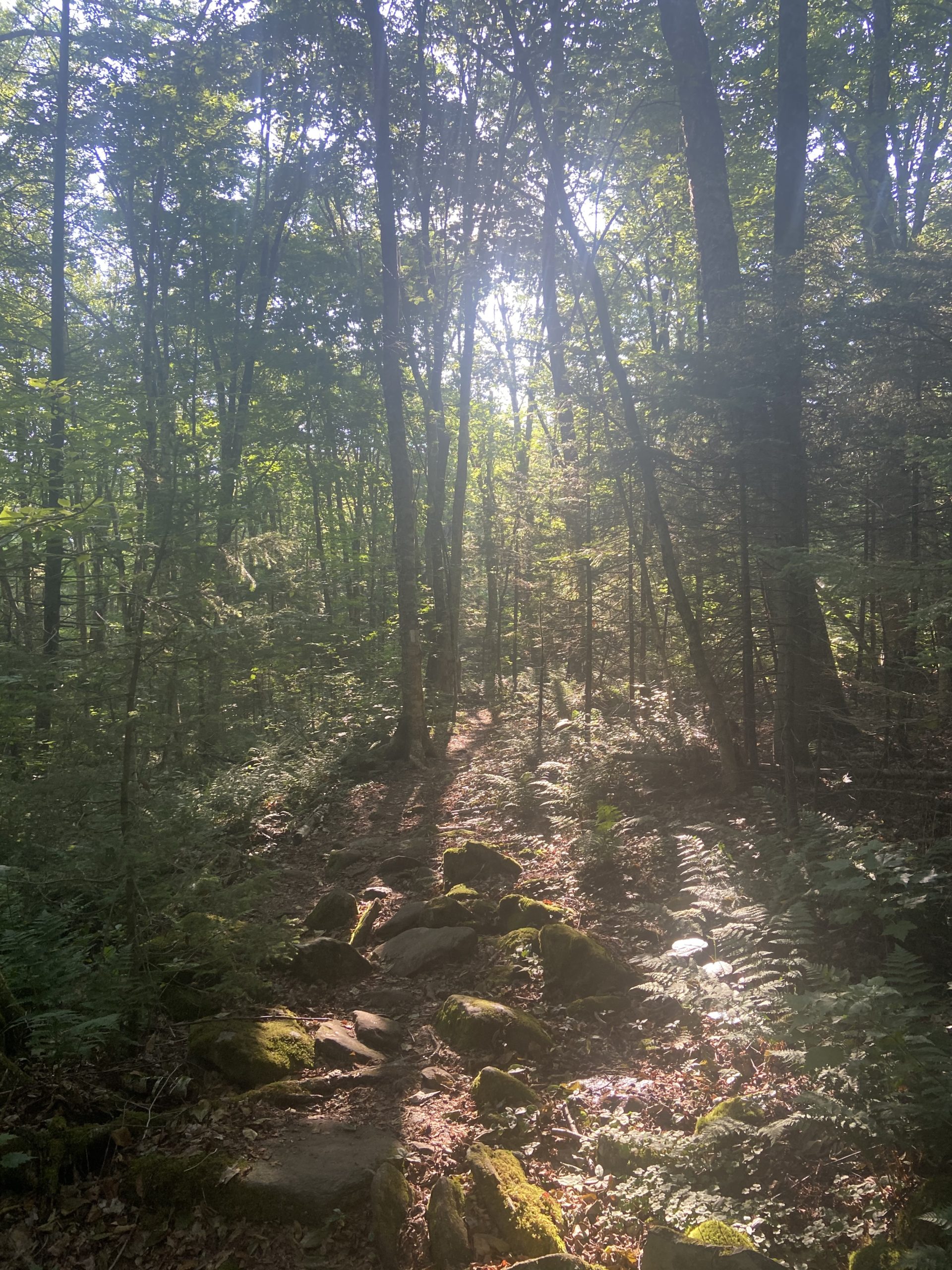 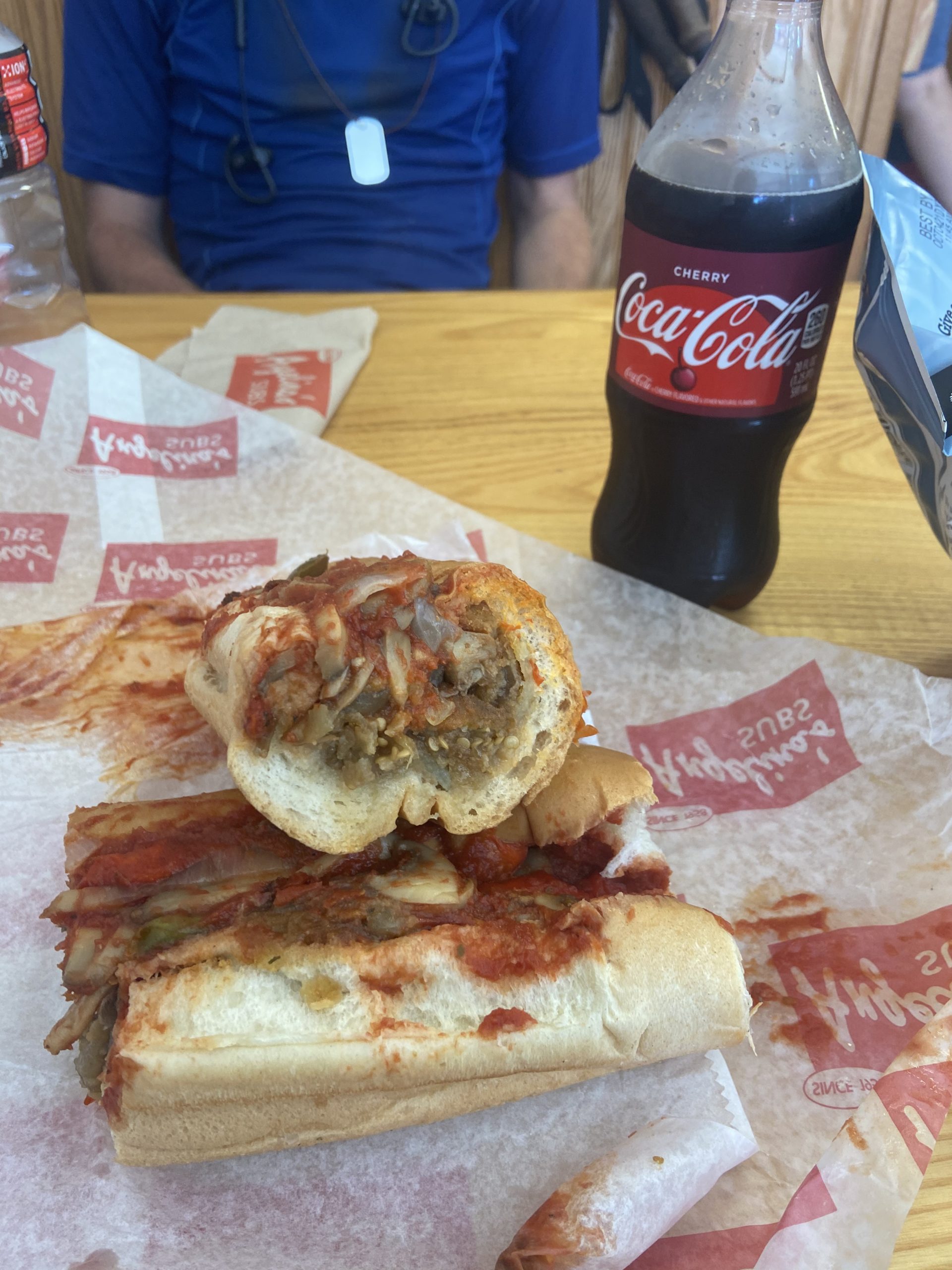 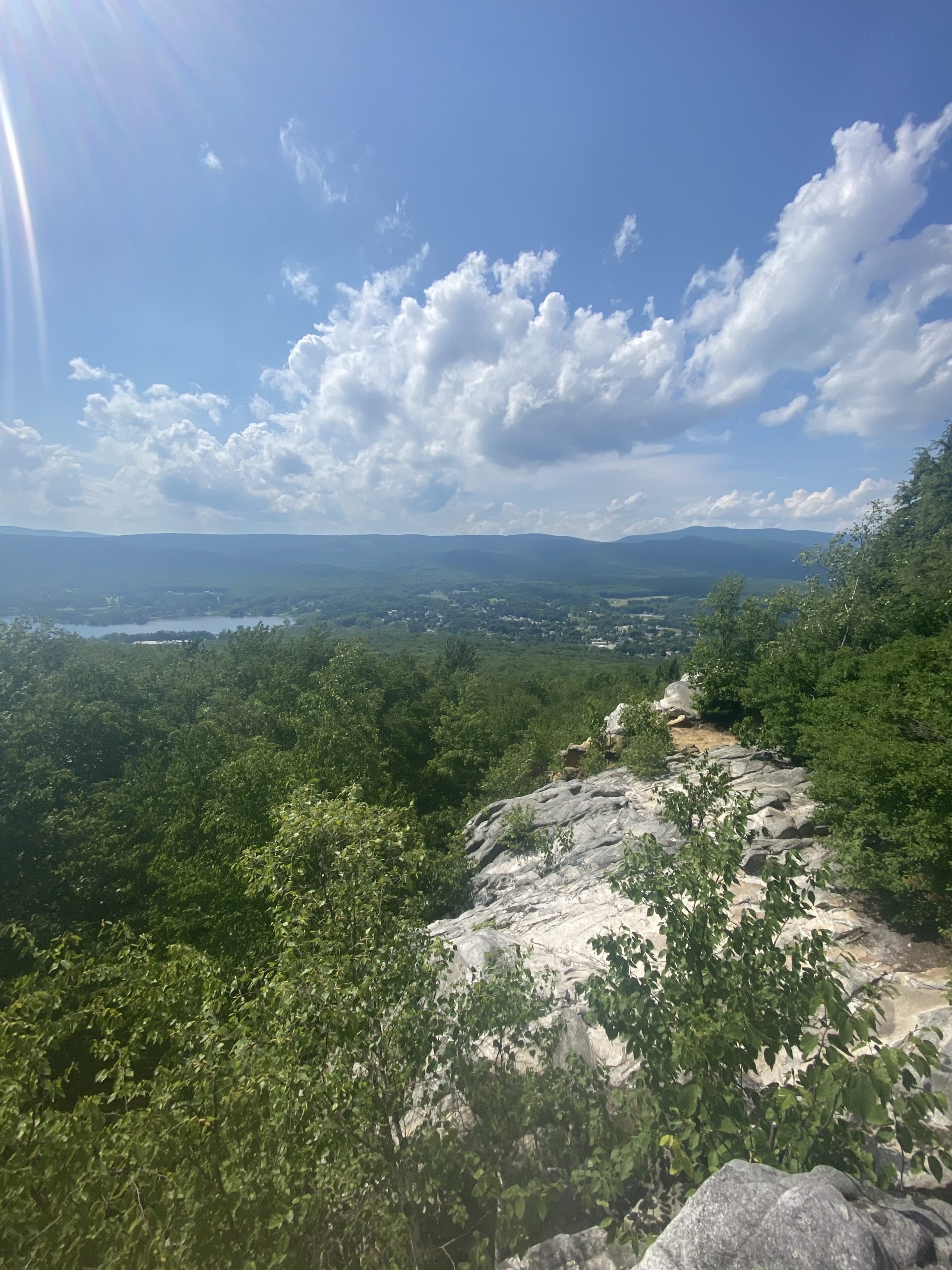