I was still adjusting to my new surroundings in the South as I ran into four more incredibly hot hiking days!  It was very difficult to take in scenery when staying cool was priority one, two, and three. But when the animals showed up I had to take notice!  Here are the details:

A rough introduction to Virginia

Many of you probably do not know that Virginia has the most AT mileage of any state.  At over 540 miles of trail, it is nearly a quarter of the full Appalachian Trail.  I fully expected to spend at least a month within its borders.

But as I struggled to adjust to these new surroundings as I awoke on Day 92.  Cicadas buzzed in the trees and fireflies darted about in the uncomfortably warm pre-dawn morning.  And when exactly was the sun going to rise?  In Maine I was awaking with the first bird calls around 4:30 AM.  Here it was already 5:20 AM, dark and bird silent.  When I’d later check on this, I’d indeed find that sunrise here in Virginia was nearly an hour later than in Maine!  I’d need to adjust to that.

I also couldn’t get comfortable with the gunshot-like sounds of beech nuts like these slamming into logs, roofs, and rocks: 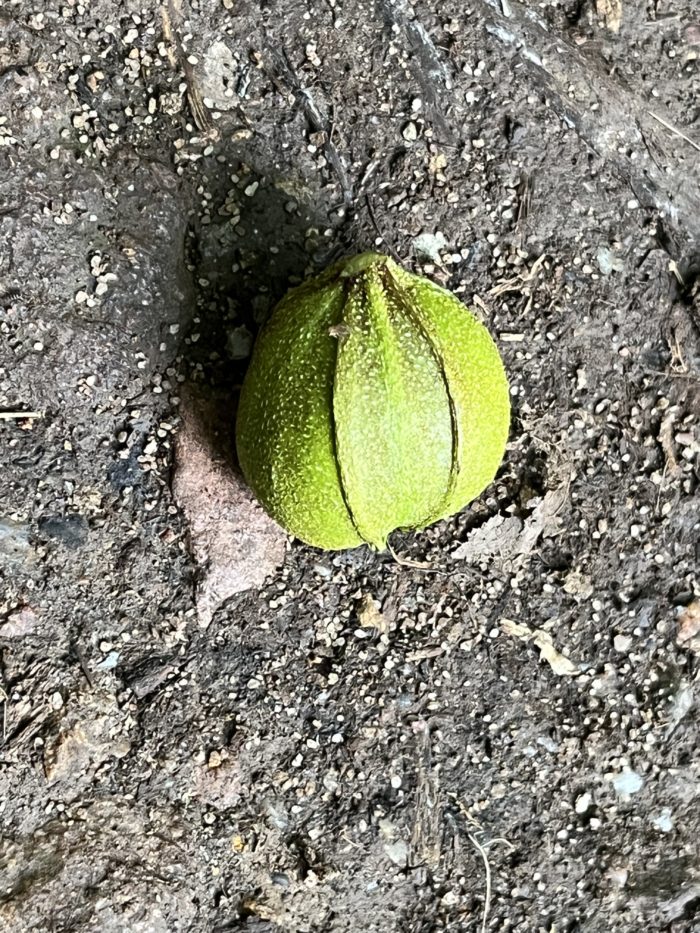 I was very familiar with hearing acorns drop but these tree nuts are like three times the size, creating some loud bangs.  On the trail as I heard them drop through leaves I felt like I should be shouting “Incoming!” and covering my head!

Ah, but there were a few positive differences from the north, like wild raspberries growing next to the trail!  Delicious! 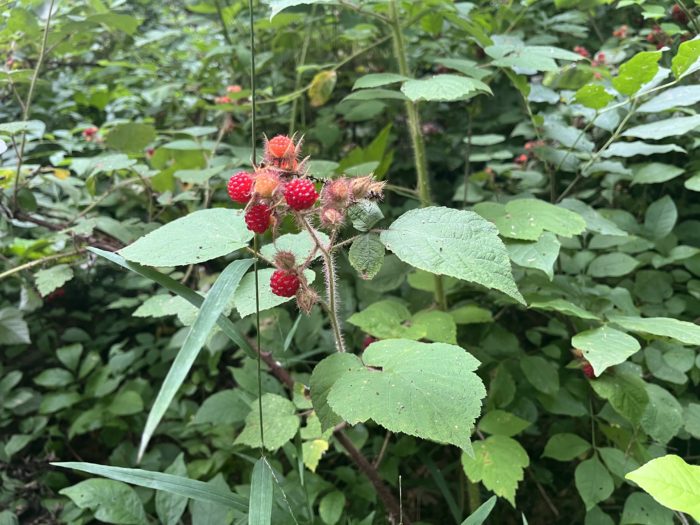 As the mercury soared past 90’degrees I was tasked with taking on “The Rollercoaster” on Day 92,  So named because of its twists, turns and dips, I found this 15 mile stretch to be grueling and exhausting.  But for some reason this stretch of trail started as sand- something I’ve never seen on mountain trails. 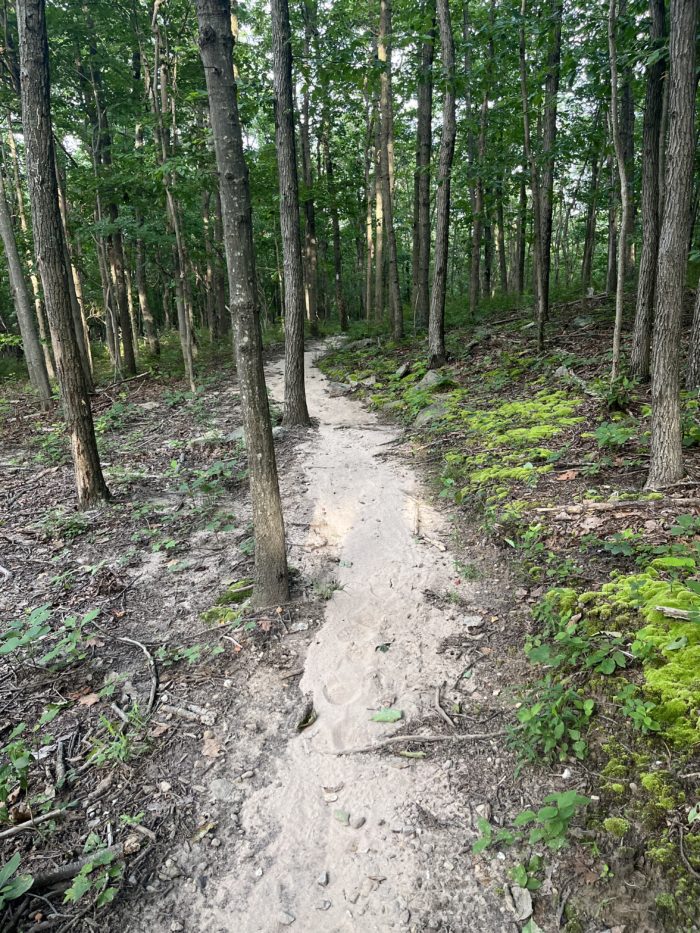 And my head music during this up and down journey?  Why of course it was Love Rollercoaster by the Red Hot Chili Peppers.  (Yes I know it’s a cover of the original by Ohio Players, but I’m a huge RHCP fan.)

Meanwhile the heat just continued to be wicked.  I would have melted under my Maine mop.  Thankfully I’d gotten my hair cut during my home stop in – here’s my neater look: 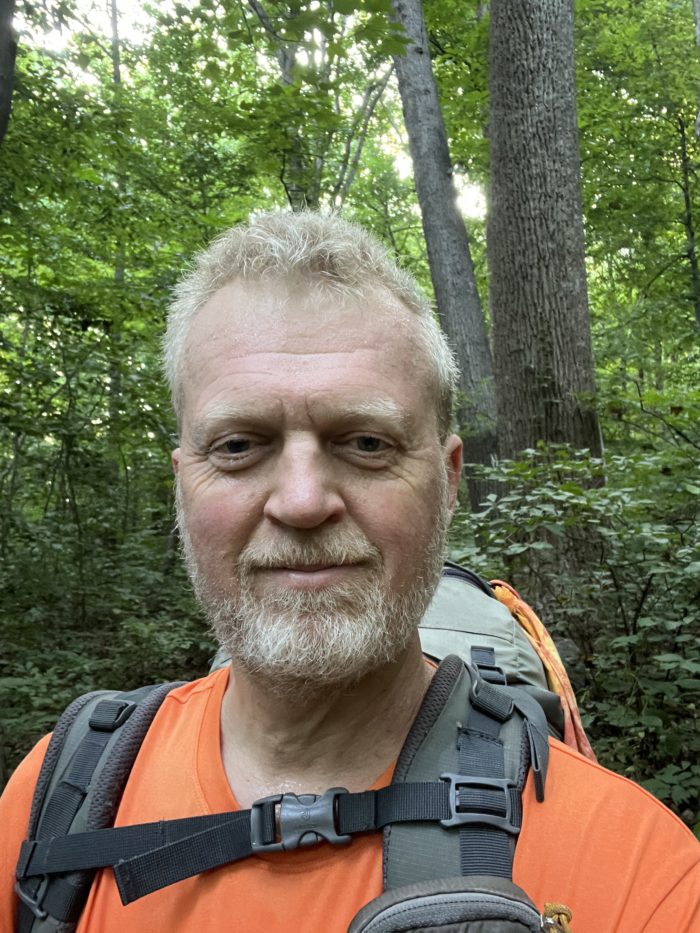 At some point during the day I also passed this sign – letting me know how many miles I had left.  Pretty cool! 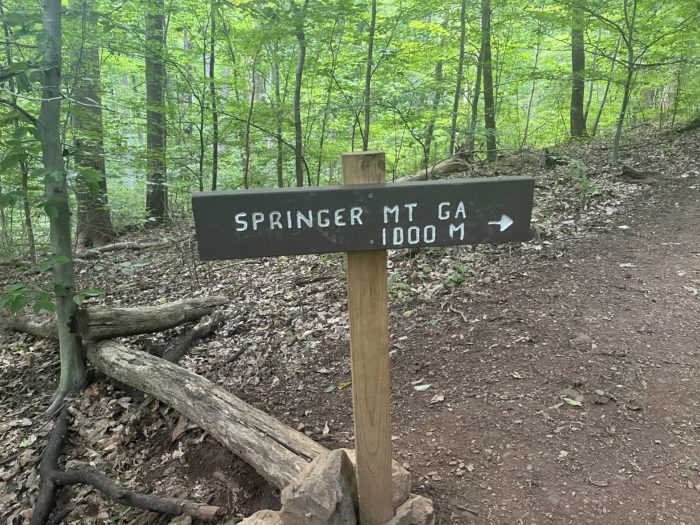 That night I tried to settle into sleep in my hammock, but outside it was absolute cacophony in the blazing 83 degree heat.  Cicadas and sun crickets still buzzing, planes flying over, and I’m sweating with just a shirt and shorts on.   Definitely.  Not.  Maine.

Easy walking …. To the sky

Day 93 brought some MUCH easier terrain into the searing heat- and that made all the difference.  Sky Meadows Park was a particularly nice venue, a flower filled meadow on top of a 3000 foot peak: 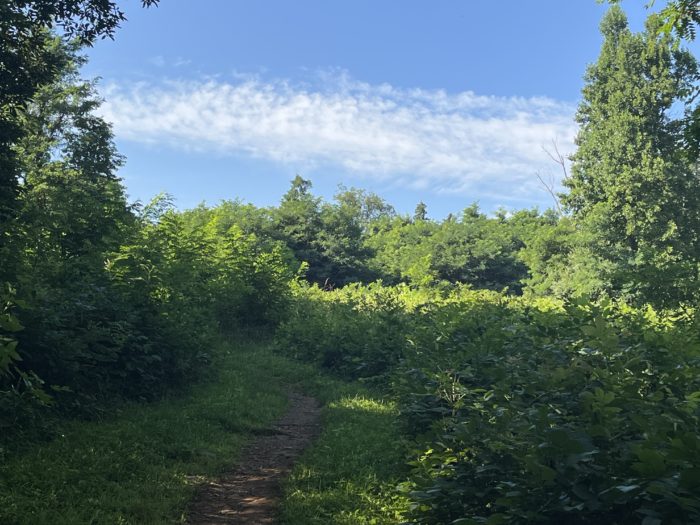 And they felt compelled to rate the trails through their park.  It was here that I discovered that this Appalachian Trail I’d been trudging through was actually EASY, a green trail!  But woe to those who dare to trek the black diamond North Ridge Trail!! 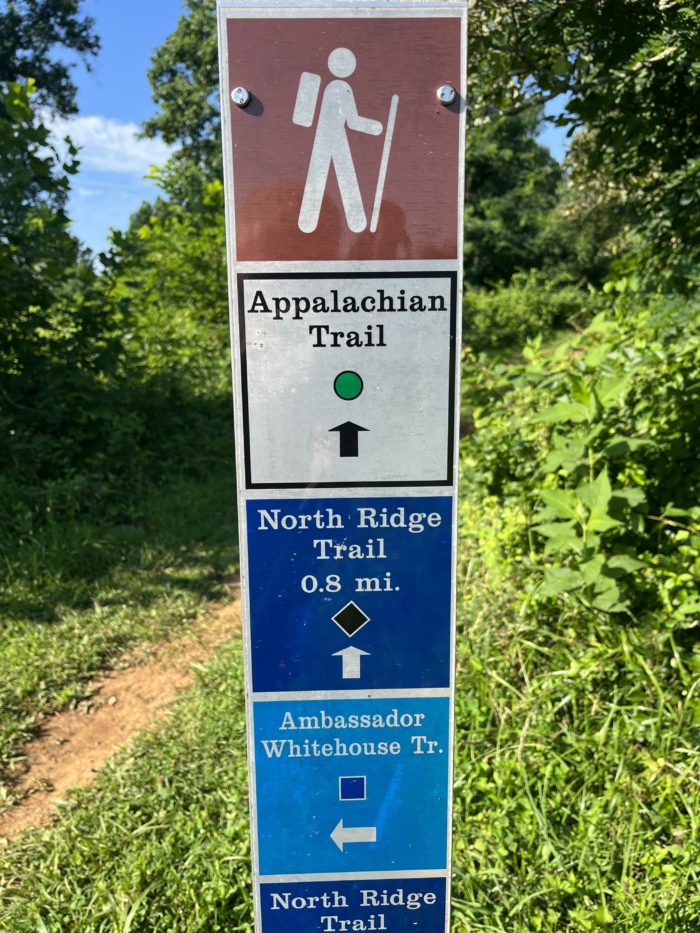 Most of you know that I feared seeing rattlesnakes on my trek north.  I’ve never seen one outside a zoo. The VA snake talk started with a couple of NOBO hikers I met at a stream.  They said they were happy to be departing the area because there’s “too many rattlesnakes”.  They claimed to have seen five “lying right across the trail”. One hiker actually stepped on one, but avoided a bite because “the snakes missed”.  I was not encouraged by this dialogue- I’d gone rattlesnake-less through the loaded states of Pennsylvania and New Jersey and felt pretty good.

The next day a NOBO hiker asked if I was stopping at the next shelter.  I was, for lunch.  He told me to be careful, because a Copperhead was living under the shelter.   I never saw it, but that afternoon my MMM (Most Memorable Moment) of Day 93 would be my encounter with this reptile: 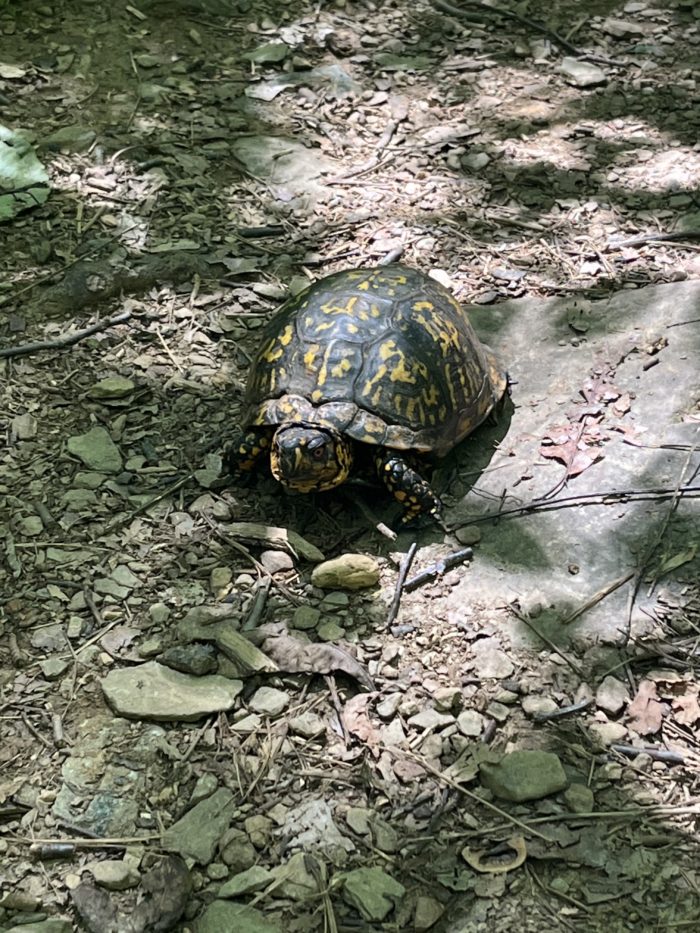 He was no bigger than a pineapple (minus the green stem) and sitting in the exact middle of the trail getting some sun. I was very happy that he wasn’t a reptile of the long serpentine type!

On Day 94, Bruce, a fellow Massachusetts hiker, claimed he encountered a rattlesnake in the center of the trail.  After it gave its rattle warning he claims he reached out with his pole and flung it to the side of the trail – where he proceeded to TAKE PICTURES of the upended snake!  He showed them to me later, somewhat proudly.

Now Bruce had a mere five trail days under his belt, and honestly after that story, I worried about his long term viability in the woods.   The one thing I knew was that if I got rattled at, I wasn’t REACHING FORWARD to make some motion at said rattlesnake.  At that point, I’d be slinking away.

It didn’t take long for me to put these thoughts into action.  Shortly after departing a wayside on Day 95 where I downed mega-calories, I encountered a rattler lying across the trail: 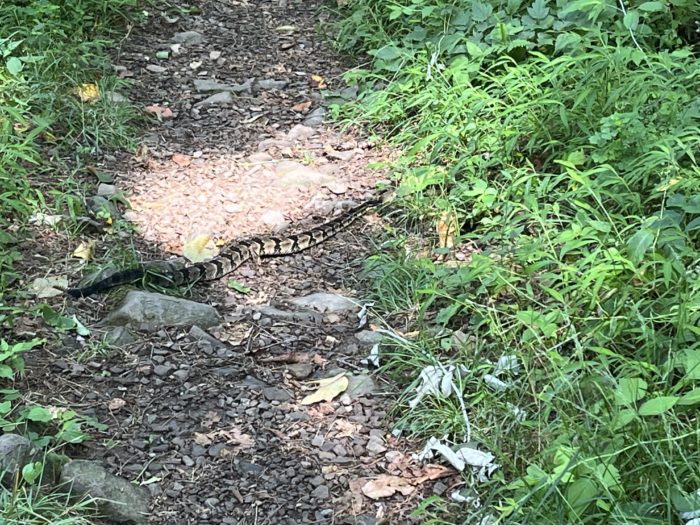 I spent some time looking at him because he never rattled, never really saw me, and generally was disinterested.  It was almost like he was a rubber prop snake put out there to make me feel like a snake charmer!  Anyway, I took a couple steps to the left and store on past.  He never moved.  It’s not great drama but I’d seen my first wild rattlesnake and survived,

Pictures of my mega-calories double meal

I mentioned eating at a “wayside” earlier.  These are combination store and grill places next to the trail.

On that day I had a second breakfast at 10am, including Twinkies (yum!): 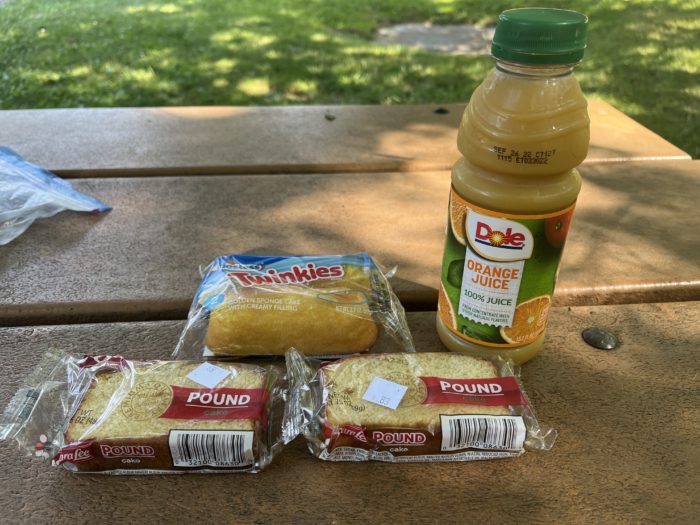 And then when the grill opened at 11, I had lunch that included a Smashburger and a soda called “Dr. Wham”: 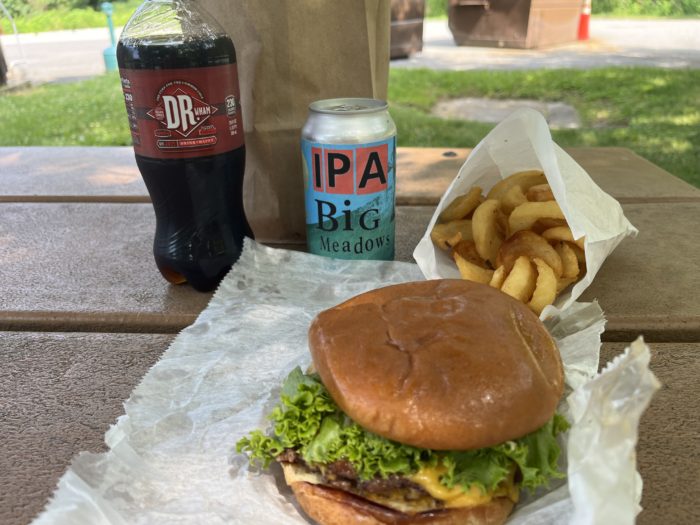 One final animal encounter happened on Day 95 about an hour after the rattlesnake event.  I stopped to look at a trail sign and heard a loud clattering to my left.

It was a bear cub climbing straight up a beech tree – an amazing sight!  He climbed about 25 feet above the ground in no more than five seconds!  As he looked down and considered coming back down I hightailed it out of there yelling at “Mister Bear” to stay away!

I’d head to a hostel in Luray, VA that night to resupply and get clean, leaving the very hazy and hot ridge behind. 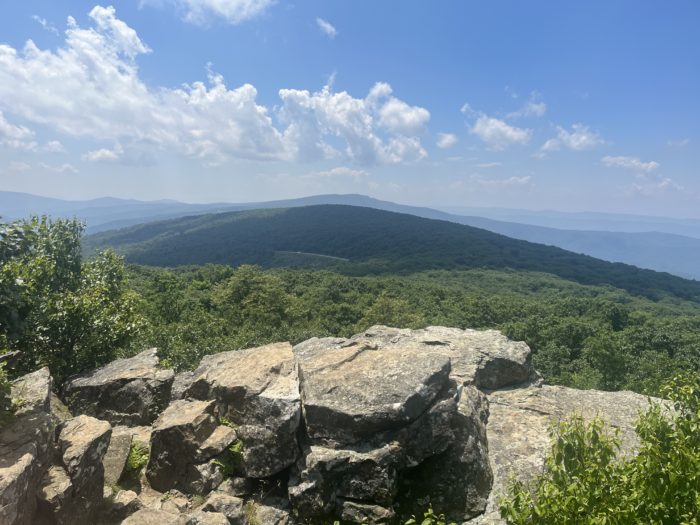