After an hour of steep ascents, a smooth area could be seen. This was a good spot to take a mini-break. The icy talons of the invisible swirling overhead storm could be felt. Staying too long in one spot, the icy whip reminded people to move along quickly. How cold was this vortex? Sweat froze on dark clothes as a froth. Moving onward.

The valley overlook displayed deep greens, vibrant purples, aqua blues, and light browns that only nature could design. Crisp air was sampled and vigor filled the hearts with pride. 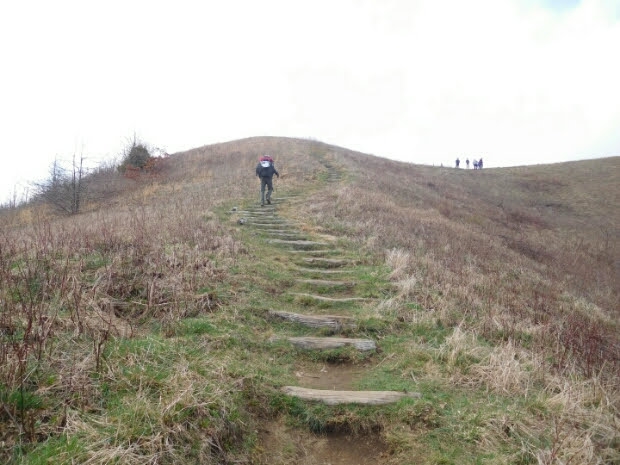 After some travel, stairs could be seen nearby. This had to be Max Patch. A lot of stairs wedged into the slope made it easier to ascend. Gaps between each of the stairs were approximately 15 feet. The top took a while to ascend. Plush browns entwined the dark green treetops while leaves were briskly swept across the landscape with gentle breezes. Natural scenery is one of the best to witness.

Dreaming of butter, dehydrated milk, tuna, ranch, bacon, and noodles with olive oil could solidly be imagined. Drooling began slightly. After dinner was prepared, the phenomenal backdrop could be appreciated while enjoying the heavenly blend for dinner.

A sense of calm and a wave of lightning came over the senses. Happiness, peace, and fulfillment hit all at once. Hot meals can so easily erase the hardships of the day. The night calmed the heated summit and all occupants drifted off.

As if night invited hundreds of partygoers to Max Patch, lots of footsteps could be heard thundering down the pathway. Drinking, throwing up, starting campfires, games, and much more ensued. Later, around 2:30 am, much of it tapered off.

Coffee and oatmeal with dehydrated berries were enjoyed for breakfast. Options were discussed for water stops and end destinations. Some voices could be heard nearby.

Talking with hikers is such an amazing thing. Learning all about them and their inspirations is a must. There were two hikers coming from a different trail that merged onto the AT.

It was found out, they had done 300 miles of another adjoining trail. The journey moves on.

Another building called Lemon Gap Shelter was visible. A conversation started with Chris. He wanted to hike the AT but was hesitant to start. He was amazed to be talking with others who were currently doing just that. His dog began sniffing the surrounding area. He wished us great luck to finish and they went on their way. 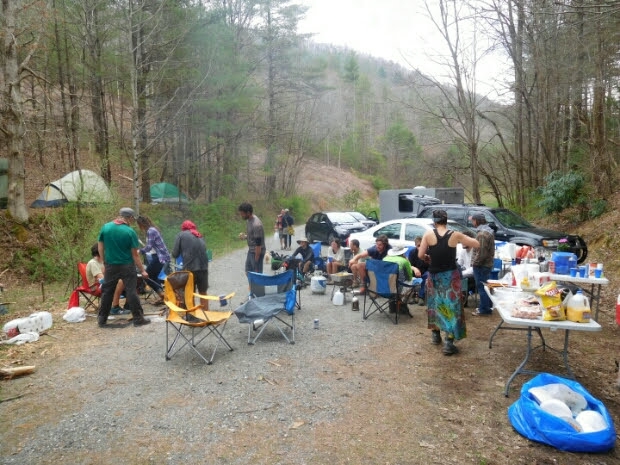 A ridgelike corner was crested. This is when the SunShine Gang appeared. There were hikers and people all over. Each one had extremely colorful clothes. Seats, chairs, beers, booze, hotdogs, and so much food right here. Blinking a lot, speaking to one of the people, it was decided this was not a mirage. The smell of campfire. cookies, hot dogs, and chili was heavy in the air.

“Come sit down if you are hungry,” was heard. There are sodas, beer, booze, macaroni salad that was homemade, and more. Hang out for a bit and enjoy.

Eight people were hosting this event. Stories were traded. Each one of the people there had either thru-hiked the AT at one time or done most of the sections.

Almost an hour had gone by. Taking a hit of bourbon, the wandering was again underway.

The shelter quickly showed up, after checking it out, it was decided to move 3.2 more miles to town. A valley overlook was nearby.

The final descent into town was finished.

Cheers could be heard from a previous tramily. “Yay, they made it!!!” Waving to the welcome committee then wandering towards a small hotel, accommodations were secured. Easter was supposed to be tomorrow. Many rumors were flying about how festive this place was on that day. Rest was much needed and sleep couldn’t be helped.

Today, the doors were opened with vigor and much hope. Crickets chirping and not a sound all day for the events that were so being dreamed of before. Hearts sank as reality set in. Trying to shake off the dismal thoughts, it was time for checkout.

Brian and Susan were running this place. Conversation started and said they have a son serving in the military. A mocha latte was offered. This heavenly mixture of sugar and chocolate was sipped enjoying every moment. This is a definite stop. It is by some railroad tracks. It is a well-designed store with a breakfast and coffee bar to boot. Leaving the store a short while later, gear was grabbed and onward the journey went.

The dirt path wound sharply up for a while following the river. What looked like a dead branch on the path suddenly coiled up and was poised with tongue flicking and two eyes looking this way.

Branden wandered by as if it was not there. Next, a trekking pole was put toward the snake while passing by to distract it with much relief. As others were passed, they were warned of the trail snake.

A short travel later, a bridge crossing came into view. Branden put both his trekking poles overhead waving them around with a furious dance. Lots of honking came shortly after. Satisfied with the get some stress out dance and some serious laughter, 3600 feet were ascended.

Locating a campsite for the night wasn’t too hard. Branden was seen nearby trying to toss a rope over a limb to start a food bag hang. Many failed attempts later of the rope wrapping 5-6 times around the limb, coming up short and the adjoining laughter came with it.

Wanting to help, the rope was tossed over the evasive limb. Lowering one side and clipping on a bag, it was pulled up. Eyeballing the difference, the other bag was clipped in and slowly let the similar weight bags go up and balance out. They could be pulled down with a pole.

At 3 am, rain forcefully blasted the camp along with gusty winds. This lasted for about 4 hours. Later, sounds similar to the tv show Star Trek when the transporter beam was used were heard. Joking, it was said, “if that is aliens, please don’t swipe anyone during August.”

A lunch area was located, cheese crackers and white cheddar flavored popcorn were ransacked. A sign was nearby. It read “Cherokee Forest Ahead.” Moving on, a church was hosting some trail magic. Some Gatorades were drunk and thanks were given. Continuing on, a site that was home for the night was settled into.