Getting an early start, another day began. Summiting the hill, many signs were present. Some stating “water this way”, “overlook” and a really dark tree tunnel. This was creepy because the sunlight of the day was maxed out, but somehow the tunnel was still very eerily dark. Turning a corner, some steps could be seen.

A sign could be seen that read “this way up.” The path was assembled out of large stone steps. Each one was wedged into place perfectly to make up or down easier. Each stone height was a few feet tall. Some steps would shudder when stepped on requiring a precarious balancing act.

Wandering up the path, a monument was in place about an engineer who built or designed the building in view. The scent of a fresh meadow was in the air. 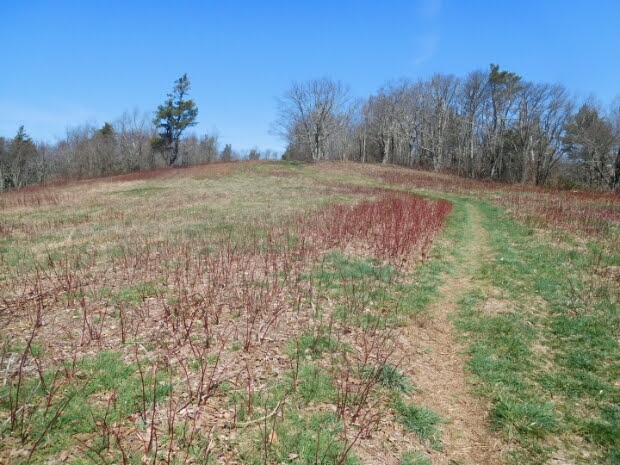 Wandering casually, the trail opened vastly into a deep emerald green meadow. Some of the plants on the sides were lightly red. Leaves were on the ground summoning a new season.

The rolling flats were a comfort to walk on. This is usually a sign it will lead straight up or down. Soon, the answer came to be. A mile-long sharp upward ascent had to be climbed. A corner was turned and the shelter could be seen tucked into the trees. More hikers joined for the night. This was an unknown turning point at this time.

Starting at the crack of dawn. A German dad and his son were out for a week-long section hike. Bidding greetings and farewell, morning chores were done.

Heading to the freeway outlet, Branden wanted to head into town that was 2.5 miles straight down a highway to refill his food.

At the highway mile marker, descending over an hour, a decision had to be made. The book or app mentioned nothing about this turn. Left, or right? Right was chosen. After 45 minutes, it was obviously the wrong way. Heading back the unchosen path, a store with a coke sign was spotted.

Branden talked to the owner of the gun shop and found out the store we wanted had closed months ago. Pulling hair out! All this because more than two days of food was too much for him to carry. What a day!

Taking the incredibly steep highway back, half of a day was now busted. Hearing a few vehicles coming, hitching was attempted a few hit and miss times. Finally, on the 4th one, two ladies in a van stopped to pick us up.

Striking a conversation, it was found out one of these ladies was the wife of Olaf (dad) and mom of (Timon) who were at the shelter last night, while the other lady was her sister. The odd thing is they have never ever picked up hitchhikers. Driving to the destination we needed was the same area they were picking up the husband and son from.

A German conversation between the ladies and the husband started. The ladies insisted we take the rest of the food because the dad and son were done section hiking. Branden’s predicament may have been solved. Refusing gently, but taking the food, pics were taken with the savior hosts. 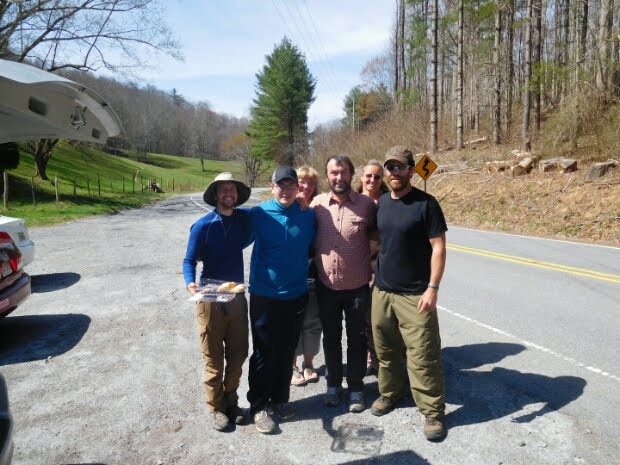 They warned of foul gusty weather and said “call us if you need a place to stay for the night,” and numbers were exchanged. The highway was crossed into the field.

Going through a field of light brown flowing grass, a man came into sight. His trailname was Wailin. He asked if some Pop-Tarts, Kind bars, and sodas were wanted. Downing the sugary liquids took mere seconds. Traveling further, Hog Back Ridge was near.

A water source was located, but it was a muddy water pit floating with debris. Yuck. Only less than 9 miles had been hiked today. Another water choice was needed.

Wandering off, the trail careened along a wooden fence. The barbs were heavily rusted. The highway was reached and off to the side was a seemingly perfect tent site. A dog could be seen. The owner (Pappion) soon followed the dog. He asked trail names and offered to remove the trash from the packs. Thanks were given and the day went on.

Camp and the Vindictive Branch

Trail pizza was being made. These were bagels, pepperoni, and cheese slices. Moving not too far up, camp was set up. Branden had a branch picked out with a paracord line over it. Both bags were hung for the night, and sleep came for us.

As dawn broke, Branden was pulling on the cord for the bags, but it would not move. The cord was getting stuck on the thick, semi-sharp bark.

Grabbing the line, he said pull. After a few pulls from me, (trying to free the line with a few pull then release and repeat moments) then “Wham” right on top of Branden the branch decided to go. That didn’t go as planned.

Saying, “are you ok?” was asked. Branden replied, “when I am asked what happened, it will be, you pulled the tree on top of me on purpose. The gusty winds begin.

The winds were blowing with a ferocity never experienced yet. They would howl and gust while almost flattening the tent poles. The sounds resembled a plane starting to take off on a runway.

Breaking down camp in super gusts is very difficult. It was like trying to pack a parachute in 35 mph winds. Quickly putting the camp away, a vicious ascent had to be done. It took an hour to traverse the incline. 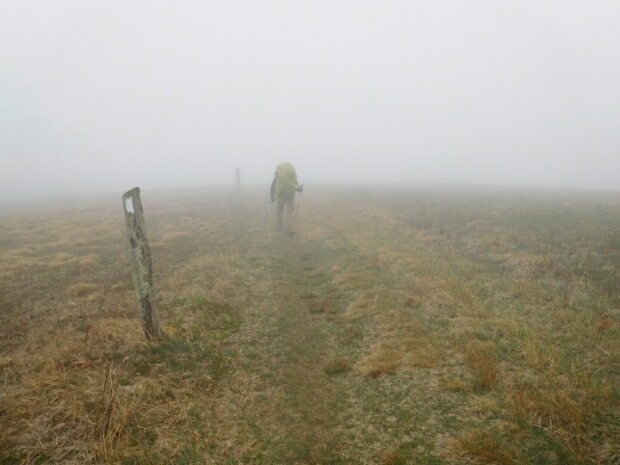 Summiting the ridge with thick fog layering the surroundings, winds instantly tried to slam us back off the ridge. The winds were so strong it would have stripped one of the pack covers clean off, but it was tied to a pack. 150 and 200 plus pound men were being tossed like ragdolls in this raging vortex. One ultra gust slammed both of us together. We were knocked down. Dense fog laid heavily in the new area.

The surroundings were a humid, dense foliage-rich brush while the trees had long leaves. It was extremely quiet. This was eerily similar to the movie. The way into recovery.

Wandering a bit, the shelter could be seen. Dinner was eaten in the premium tent site location. First come, first serve dominates this world. Erwin, TN was in the near future for some much-deserved rest and relaxation.