The familiar sounds of rain pelting the tent started up. Pa pat pat pit pit pit pa pat. Today’s day was beyond wet and cold. Trying to pack camp up took on a whole new meaning. Hands out for 5 minutes of work, back in the sleeping bag for 5 minutes to warm up. Repeat 10 times. The weather couldn’t decide what it wanted to do but was quickly turning nasty. Moving on towards a new home.

Finally coming to the shelter around 4 miles away, 3 hikers were met here. Two of the hikers were in the process of training a third day hiker for a trail located in New England. After talking a bit, some skittles and licorice were handed over. The icy talons of the storm were far-reaching. What happened? It was in the 70s only yesterday. Camp needs to be set up.

Setting up a tent space when a rumble, rumble, boom, and CRACK came from the sky. This made setup go a lot quicker. A crack again happened, but Branden’s main pole snapped in two. Using a tent pole splint and duct tape to repair the pole seemed to hold fine. Sounds from new people could be heard early in the AM.

This isn’t the feeling you want to have in between shelter privies. The alarm bell that says find a bathroom soon or else, was ringing. Ridge lining about 6 or so tops and an unknown amount of switchbacks, Branden spotted something that led him to believe there was a nearby bathroom. Glad to have taken care of business finally.

Climbing mountainous amounts of stairs, switchbacks with ice, the grass-covered top was finally in sight. Or was it? A sign came into view. It read “Carvers Gap” and had an arrow pointing a direction. Clumsily stumbling down and over awkward rock placements of the path, about an hour goes by. 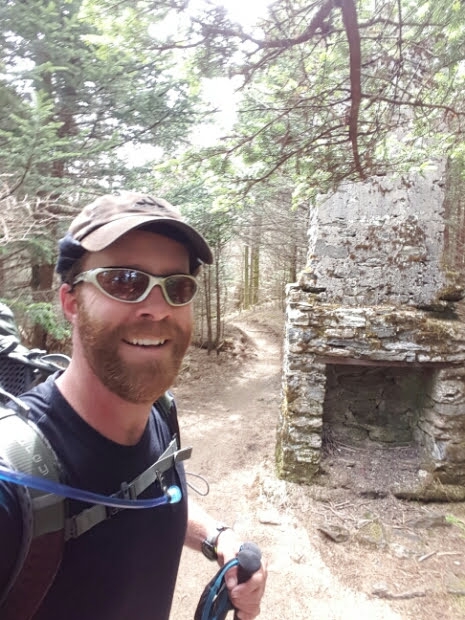 What is this just off the path? A chimney stack? On Roan Mountain? I want pizza! Aww, didn’t bring any, haha. Moving on, a blue blaze could be seen with a family near it. They wanted to know about nearby overlooks and told them “there are some up the blue blaze trail.” Traversing many switchbacks, Branden, who was at Carvers Gap, could be seen.

Sailor and a woman named Betty were hosting. Some drinks were sampled, thanks given, and moved on to the barn shelter for the night. 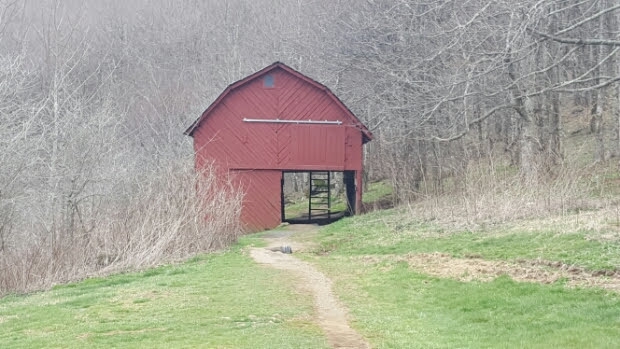 This semi-red barn that leaned and swayed with any wind or person’s movements had some deep history. During the war, soldiers supposedly slept in this very place. More details can be found on the sign before you turn to get to the barn.

The winds swirled and every gale gusted blowing the shelter to and fro. Leaning and creaking could be heard all over. The floor slats were spaced just far enough apart so that the icy winds would blow between them. The upper area became an icebox freezer for the night.

As the weather stirred and produced rains that trickled subtly off the metal roof, a few hours went by before it stopped. Breaking down camp, the journey went on.

Hiking to the ridge was monumental. A view with a perfect, no blocked path of sight for miles. The sun illuminated the valley shining on a young boy playfully chasing around a dog near a farm. A red tractor in a deep green grassy field was in view.

A town was sighted to the left. Buildings with new paint color schemes ranging from brown, white, blue, and reds were barely visible. Taking it all in, it was time to move on. 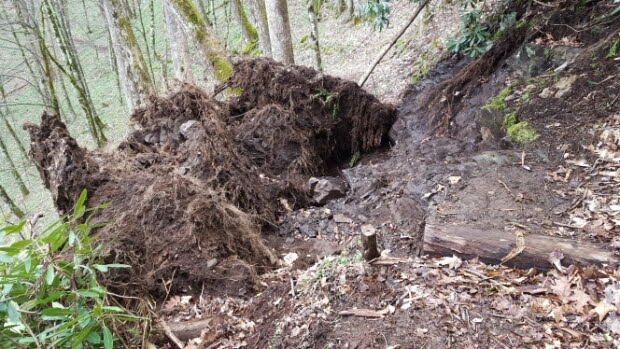 Traveling a few hours, the trail looked like a piece of heavy equipment took a large chunk out of it. The last night’s powerful winds may have done this. A statue was around the way.

A couple-foot-tall statue was seen. It was a Jesus statue offering an embrace with arms open. The writing wasn’t visible from this side. Moving on, a church that was snuggled against a nearby white fence in tall grass was passed.

Looking for a good spot to sleep, nighttime settled in and took people off to dreamland.