– Over Mountain Shelter to The Rabbit Hole Hostel –

Getting woken up almost on the hour by rain was an understatement. This sounded like a kid that had complete control of a sink sprayer. This starts with full blast, trickling off to a soft spray, then repeat for 6 hours. Getting up at dawn.

Floating the tent fly in the windy breeze, trying to dry it off was a chore. The cooling, icy nearby waterfall could almost be pictured that wasn’t far off. 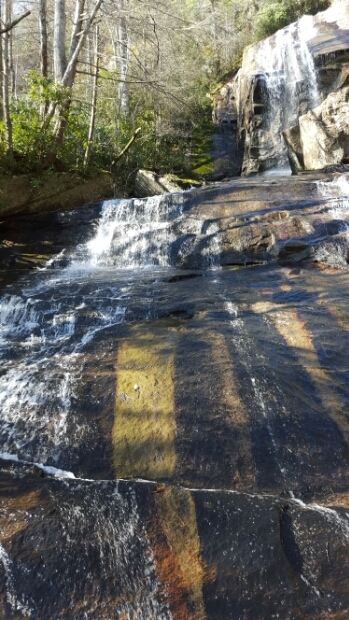 The clouds were few and lazily floated in the deep blue sky. Listening carefully, a large gushing water body could be heard. Enthusiasm surged. Thinking about soaking aching feet, cooling off, and wetting a small towel to wrap around the head and neck were monumentally great ideas to banish the morning’s humid, blazing heat. Packs were dropped and running began.

The waterfall proudly displayed its fury. This was about 100 or so feet high sloshing on and off layers of deep black rock. The crystal clear waters sprayed and slammed their way down to the frigid pool nearby. To stay or not to stay?

Indulging as much as could be, the icy waters were left in the distance. The valley opened up. The pathway opened next to a rushing river. This had to be a fishing paradise. So many fish could be seen from the top underneath the vivacious watery spray. The air cools off very suddenly.

A hiker named DSquared wanders by, stating, “snow is supposed to be here tomorrow.” Looking up, seeing only clear skies, a whatever is said. Looking over the areas, plush, cushy grass areas beg to be tented on near the river. Resisting 15 plausible locations, an unusual object is noticed.

Sitting in the middle of the path is a park bench. A long break is taken here. Enjoying the item a bit too long, some snowflakes begin to fall. What was happening? Why? Not again!!! A river crossing was just around the corner.

Finally, after so much waiting, a place to cross the river shows up. The shallow river is moving slowly. A few large boulders are carefully hopped across, being careful not to slip on the green moss covering every stone.

A tent site needed to hurriedly be found. The temps were dropping quickly and the snow was thickening. After a few hours, a suitable spot was found. The snow quickened its pace coming from the sky as night settled in.

The night was scattered with the sounds of snowballs being thrown at the tent and slushy smacks. What was going on out there? (Snow was building up on the trees and plopping big heapings onto the tent) Expecting a few inches to be present in the AM was suspected. 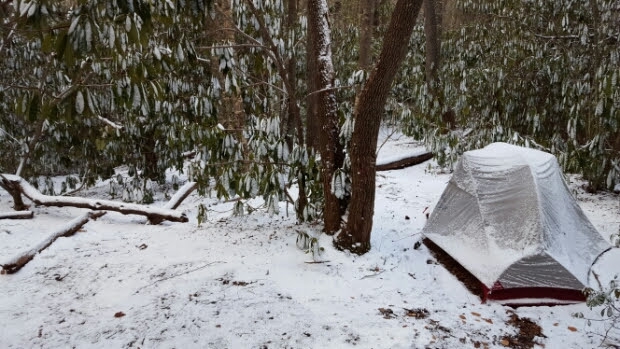 The tent was slopped and caked with icy snowy chunks. Putting this away required the rainfly to be crammed in the squishy outer backpack area until much later. The hostel was nearby.

A campground could be seen. There were many tents set up next to the river. The Kincora Hostel was next to stay at. This is a hostel that asks only for donations. A shuttle runs both ways to towns. All the walls are decorated with finished Katahdin hikes, sorted by year. A wood stove is radiating some warmth nearby. Subtle things are deeply appreciated.

This was a simplistic one main street town. A sub shop and McDs were located for some food. This was a diversion before heading to the castle hostel that was built in the 1900s. 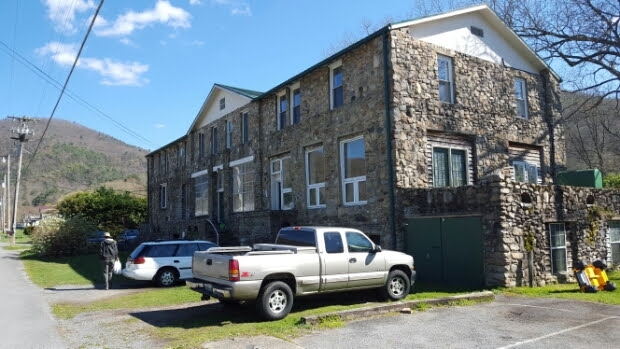 The beds were very springy. Each child-size mattress was very soft and not too supportive. It had adequate places to plug in electronics, while being located near downtown. The castle charm was impressive. The rainfly was taken out and spread as best could be to dry. A ride was needed.

Getting a free shuttle back to the trail and a scenic drive, lake Watauga was in full view. The waves were gently lapping along the sandy shore. This was a deep aqua blue lake with many trees surrounding it. Being dropped off, the journey continued. 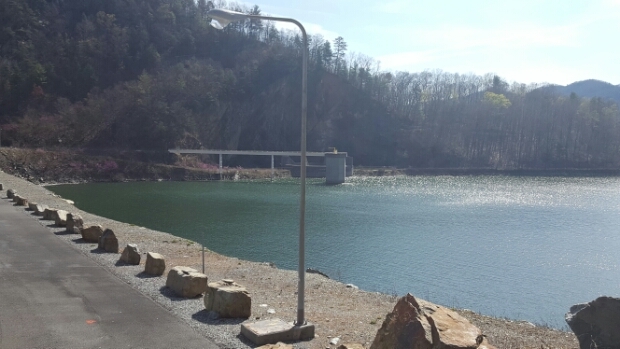 Following the path around the lake, the top was summited. A large boat at a dock within a marina was seen. The windy breeze created subtle white caps along the lake. 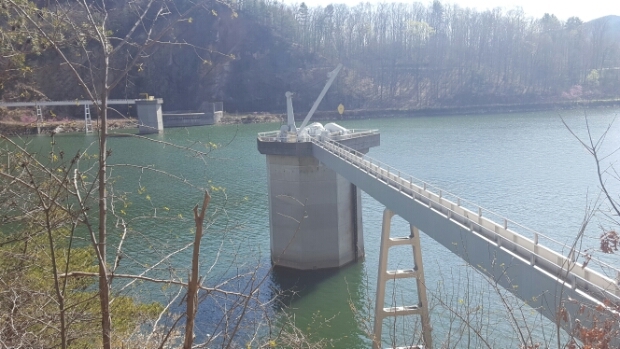 Creeping along the ridge, colorful homes decorated the valley. Water was needed.

Traversing the 65-degree decline wasn’t too bad to find the PVC pipe flowing with water. Getting the fill of water for both people, now the ascent had to be done.

What took 5 minutes to get down, took 30 minutes to get up. After getting to the top, Branden was lying lazily in the shelter and reading his book, wanting to stay. He said, “was the hill really that hard to climb up?” Smiling, I said, “let’s go now,” stifling some heated aggression.

Traveling for nearly a few more hours, a site was located. A few hikers joined during the night. Dawn brought some unknown voices. Hike early, hike in cool temps.

Breakfast was oatmeal, fudge, and some coffee. A fitness water flavor was dumped in a bottle, shaken, and thoroughly enjoyed. The blood orange flavoring effervesced quickly. Sensations erupted all over. Happiness was eternal at this point.

The path was unbelievably devoid of roots and rocks. It was a soft and supple up and down. A stone monument came into sight. 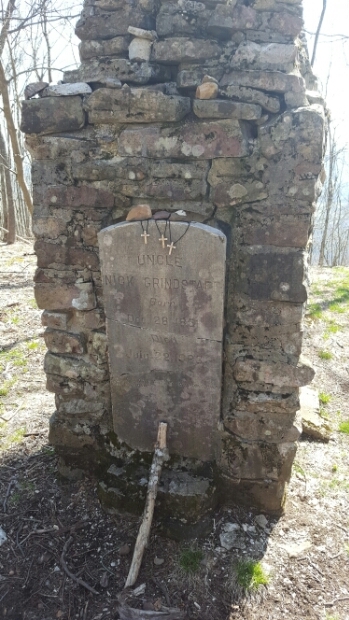 Not much on the stone, it said he was 92 and loved being on the trail. A large orange box chained to a tree was found. 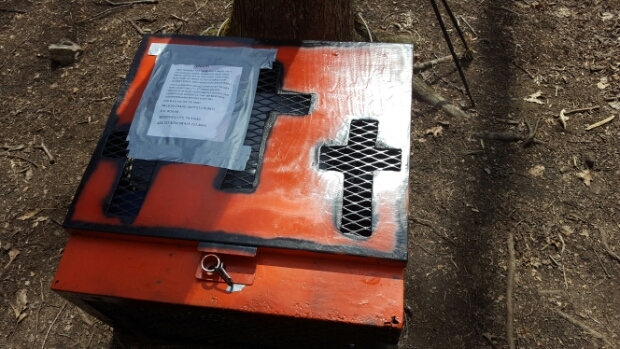 Thank you to the church for this magic.
The log inside was signed and 1 food and 1 soda were removed each.

A pinch gate meant for people to be allowed through and not cows came into view. The scent of daisies listed lazily in the air. The breeze gently swept an invisible hand across the meadow moving a large section of grass and daisies.

A couple was about to pass. The woman passed, Branden said “hello.” She said I’d say hello, but do not know what time it is.” The man passed by carrying a double-bladed axe. Saying “Moooovvveeee Onnnnnnnnnn!!!” followed by the world’s creepiest smile.

Ever seen that painting? The old couple where one has a pitchfork and there is a farm or barn as the background? These two people were from that painting.

A clear site came into view. 20 or so people passed by at blistering paces. Realizing what this meant, a call was placed to reserve our spots at the nearby hostel ahead. A bed, shower, laundry, air conditioning, and a kitchen were enjoyed and did not have to be shared for this luxurious night.