As the deer stepped and snapped limbs nearby, sleep came until dawn. Once again the day beckoned for a new start. Prior injuries haunted recent thoughts. Slow walking began.

The path was comprised of sharp, large, small and loose rocks. After 30 minutes, a hill was summited. An old structure came into view and was used as a temporary rest area. 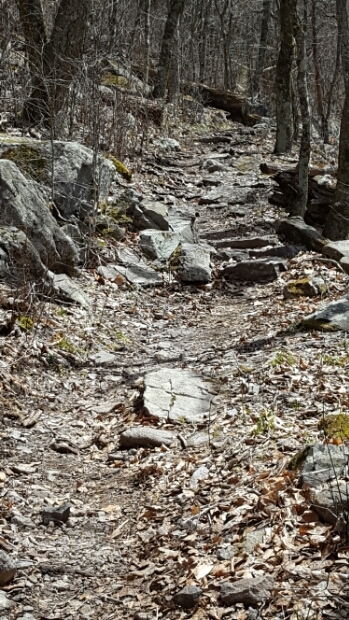 After a short break, the edge was peered over. A town engulfed in deep coral green grass and random foliage that hadn’t been trimmed in a long time was in complete view. After an hour and a half, a double white blaze was painted on a tree. Moving up and down numerous switchbacks, Pine Swamp Branch Shelter could be seen. Taking off all boots and socks relieved the heat and discomfort of the day. Something unfamiliar yet comforting was just around the corner. 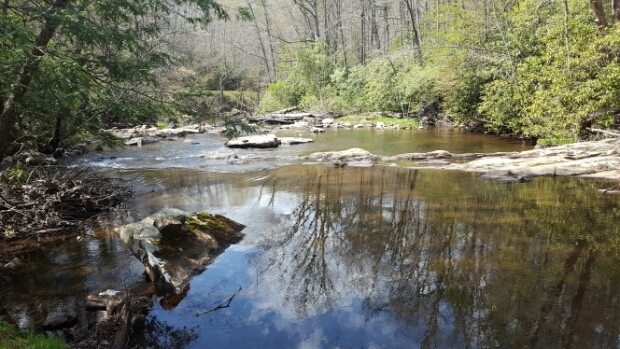 A cable line fashioned into a bridge like crossing device with a seat was nearby. Snapping packs into the carabiner and sitting on the swing, the cable was pulled, which pulled the cable slowly, enabling the river to be crossed. 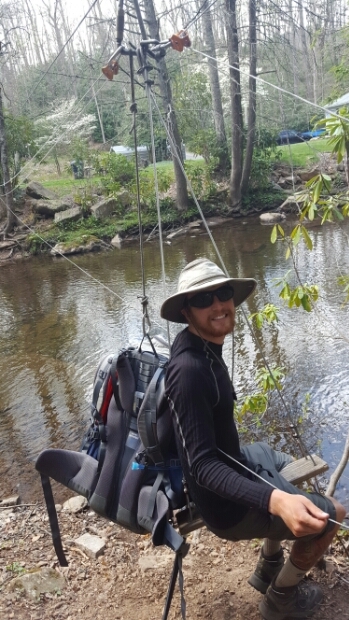 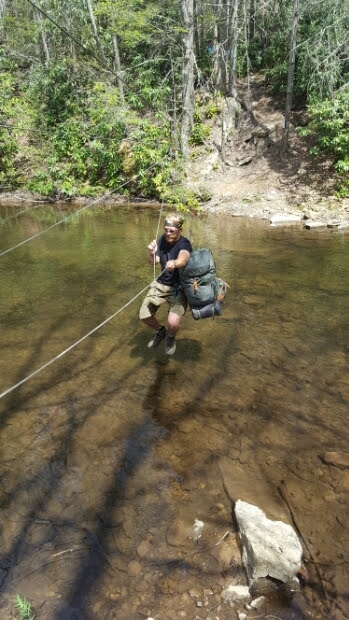 A lush large grassy area for tenting, a fridge full of sodas, charging stations, clothes line and a place for trash comprised this wonderful stop over. Chatting with other hikers that stopped in, climbing into tents for the night sounded inviting. 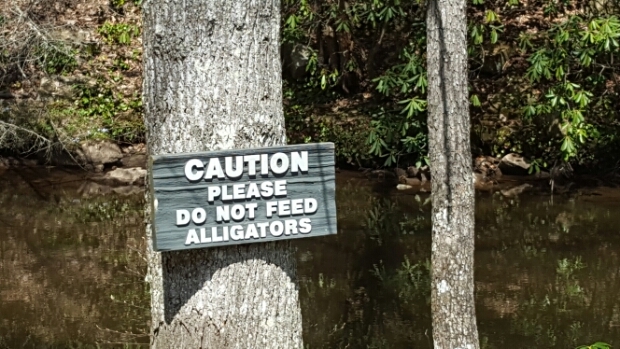 As darkness slowly turned out the lights, the tent walls flashed with lights on and off. Distant rumbles were stirring in the sky. Flash, crack, light and thunderous booms were heard. Rain, thunder and lightning flashed across the sky using the tent walls as its movie screen.

The winds started slow. They pushed heavily on the tent poles testing their resilience. For 6 hours, the storm continued to slam against the tent with heavy rains and monstrous winds. Subtly, the storm tapered off into the dark and dreary distance. Awakening at dawn, the tent was thoroughly wet. Breaking down camp, the rain fly was put on the clothes line to dry.

Packing up the rest of the gear, the zipline was used to cross back over the river once more.

The river was followed for around 2 hours. The ridge line nestled into the mountain tops. Large boulders formed from a landslide were covering the trail. Branden was a hundred feet in the lead. Rhythmically hopping across each one was the only option to travel. One of the boots caught a rock just right and off came half the sole. It was disconnected half way under the bottom.

Careful thought was put into what to do next to fix this situation. Super glue was fished out of a zippered bag. The whole vial was dispensed all over the sole. Squishing the boot and sole together for 10 minutes pressing everywhere was for hoping this solution would last. These boots had over 1000 miles on them. The next outfitter was in Daleville, Virginia 60 miles off.

Testing out the freshly repaired boots, a slight rain began. Around the corner, Bailey Gap Shelter showed up. Being dry was such a wonderful feeling. No putting away a soggy tent and less packing of gear in the morning. A few ladies were there for the night. Everyone went to sleep without much chatting.

The morning was filled with stomping feet and gathering of gear. Deciding it was time to get up, grits were offered to eat from the ladies. They said “we are done with our week of hiking and dont need these, if you wanted to eat them.” Gracioulsy taking the gift, it was eaten happily. Saying goodbye, they went on their way.

A half hour ticked by. The scent of burnt wood and charred earth hung heavily in the air. The left and right sides were deeply charcoaled. Not a tree, bush or undergrowth had evaded this onslaught. After a few minutes, Shrink (yes was a shrink) came into view. Chatting for a while about mental health, goodbyes were said. Looking up the trail, rocks were barely visible.

A few large boulders needed to be climbed. After 45 minutes, the top was reached. This looked like a great break area. Moving on after a bit, a road was near. A truck pulled up and a man said “there were a few bears that crossed in that direction, pointing north.” The truck speeds off and the path is followed.

Following a 4 x 4 trail for about an hour, a fenced opening was in view. A vast meadow could be seen with great amounts of dandelions. A few log homes with green roofs and dark brown sides were in full view. The scent of lavender floated in the air. A downed tree had to be straddled and waddled over. Misjudging a broken limb during the straddling resulted in a 2 inch long scrape. Blood began to run down the entire length of the 2 inch scrape. It sheared off all of the skin.

Taking out a small medical kit, a cleansing and antiseptic wipe was applied. A bandaid was used to almost cover the wound.

About an hour went by walking when a bridge crossing a river was seen. Plunging feet into the frigid waters hurt as much as it felt good. Ice therapy is amazing. Looking around, Keffer Oak was a huge tree with approximately 20 plus circles on its trunk with massive limbs. Following the path.

Immense rocks around 30 feet wide had to be traversed. The views from these rocky formations were subtle, yet spectacular. The shelter was only a few hours off. Peering through where the boulders joined, the bottom was so far down, it could not be seen. Hopping down boulders that were 5 to 6 foot high, was a precarious balancing act.

After almost an hour, voices could be heard. After a long day, 3 walls, a floor and a roof offered a subtle comfort. Soon after dinner was prepared and chores were done, night embraced the valley in complete darkness.