Getting scared out of a dead sleep was horrible. My heartbeat was pounding nonstop. The sky’s furious thunder was savage. It sounded like warships were blasting away at a close target not meant to have any part of it survive.

The rains and winds began to gust very heavily. They pushed hard as if an invisible hand pressed the tent inward a foot or more. It was just after 10:30 PM. This continued for at least 7 hours. Lightning, booming, gusting and the constant downpour of the sideways rains tapered off eventually. As morning peeked over the horizon lighting up the valley, the 14 plus people from last night went down to 5. A new hiker could be seen.

Oats said, “I spent the night in a tent up on the boulder ridge.” Replying, “in that horrible thunderstorm?” She said, “yes, I didn’t have much choice. My headlamps batteries were dying and I couldn’t see much while night hiking.” Breaking down camp, the journey went on. 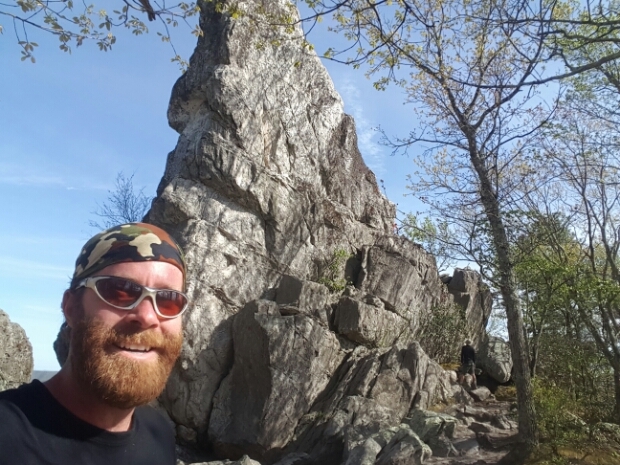 After a few hours of light ascents, a park bench was seen. Sitting here for around a half-hour, snacks and breakfast were eaten while looking around. Feet were propped onto the packs as best could be. Moving on, the path continued.

The top of the hill came into sight. The walking area was surprisingly cushy. This was walked on for over an hour. Coming around the corner, a massive rock formation stood before us.

This thing was sharp with many lacerations at different height intervals. Standing in awe looking skyward at the monumental creation, a place to climb down was being pondered.

The arduous descent began. This was a very skillful endeavor. Each foothold had to be carefully placed as only a few inches were available to step on. One bad step and 6 feet down or more you went. 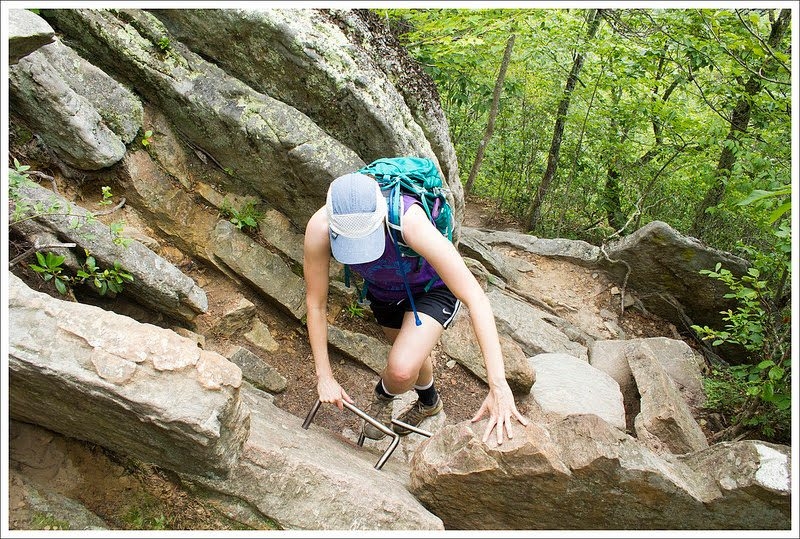 Each descent was rebar formed into a type of ladder. These were enough to assist in transitioning to the next spot. The bottom was hard to see.

Slowly moving down 20 plus rebar ladders and multiple 10-foot tall boulders, the rocky path could be seen. Many hikers were coming up to this very popular spot because it was Friday. Care had to be taken to move around one another. Eventually, the walkable path showed up.

Traveling for an hour and a half, a gas station was headed into. Soda and gatorades were purchased and quickly downed outside. As people showed up buying gas and heading inside, the door wafted the heavenly smell of bacon and burgers outside.

Everyone went inside and ordered a half-pound cheeseburger with a few pieces of semi crispy bacon and fries. These were topped with onions, lettuce, and tomatoes. The patties were a half-pound each. These were cooked perfectly. No pink was left in the burger from the first juicy bite. After devouring these, the cook was thanked and the hostel shuttle was called.

Heading towards a farm where 15 or more hikers were already at, began the afternoon. This was a donation-style setup. Inside a barn was some old dusty furniture that most hikers resided on. Outside were soft grassy areas perfect for tenting. Many animals roamed the property.

5 dogs, wild geese, ducks, and cats along with other animals wandered freely. An old shower could be used for cleaning up. Laundry was washed in a basin sink and then hung to dry. A tent camping place was selected and this was home for the night.

Early, around 5:30 AM, pancakes, coffee, bacon, and eggs could be smelled. Eating the hearty breakfast was energizing. After finishing this, about a half-hour went by traveling the path.

A lush green meadow came around the corner. It was filled with cows that all stared. A sign was in the distance reading “McAfee Knob 8 miles ahead.”

This path was one of the most heavily popular spots yet. At least 100 people were passed heading up this moderate ascent. A shelter could be seen.

John Springs Shelter was used as a break spot for a half-hour or so. It was a very structurally sound and well-maintained facility. This had won an award and was very apparent as to why. The area was starting to get heavily foggy. It was time to move on.

While hiking up, we were asked if thru hiking, nodding, some snacks in zip lock bags were handed over. Each had some raisin packs and small oranges. These didn’t last very long. Finishing the trail magic snacks and putting the contents into the gallon zip lock trash bags, upwards we went. 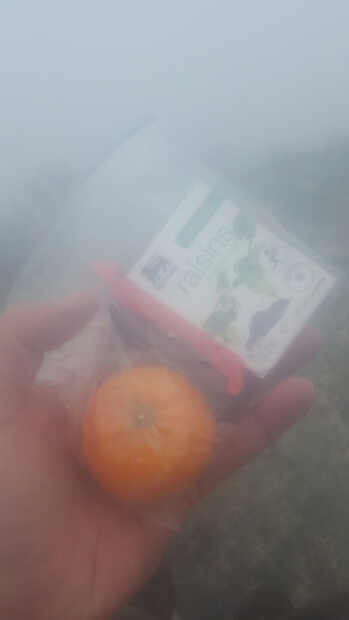 After around 5 miles, the summit area presented itself. Where was this legendary spot that so many astounding photos were taken? After talking to a few people on top, it was found out, this was the place of dreams. Looking over the edge and beyond, only clouds could be seen. 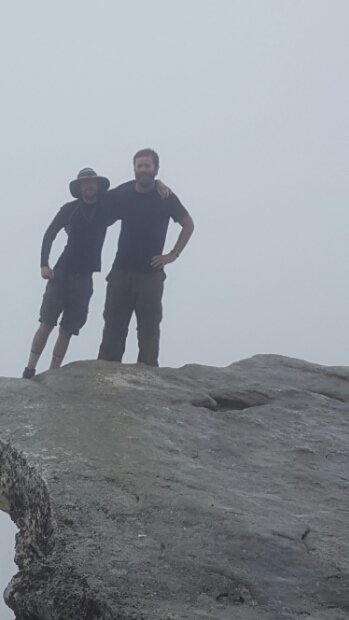 What miserable luck!!! All the way up here and just fog to see. Pics were taken with heavy hearts anyways and the descent on the other side of the hidden mountain began.

This side was so much softer and had fewer rocks and roots. Catawba Mountain Shelter was seen and stopped at for a brief lunch break. Trail peanut butter sandwiches (peanut butter spread on a small tortilla) were eaten. Only 8 miles remained to Lamberts Meadow Shelter.

The heavy rains began. The path coasted smoothly up and down for 3 hours. After reaching Lamberts Shelter, it was overflowing with hikers cowering from the rain and cold winds. It was already a 16-mile day now. Branden wanted to stay. I said, “Daleville is where I am going tonight, text me tomorrow when you get in.”

Branden was asked 4 times to come with but declined. Dripping wet and very cold the rains were a huge motivational focus. Two hours went by doing some ridge jumping and traversing rocky formations. 10 plus ridges later, the path opened into a meadow with electrical transmission towers. They buzzed loudly while passing underneath. Passing by, a wooden staircase could be seen spiraling downwards. A few views of Daleville could be seen. 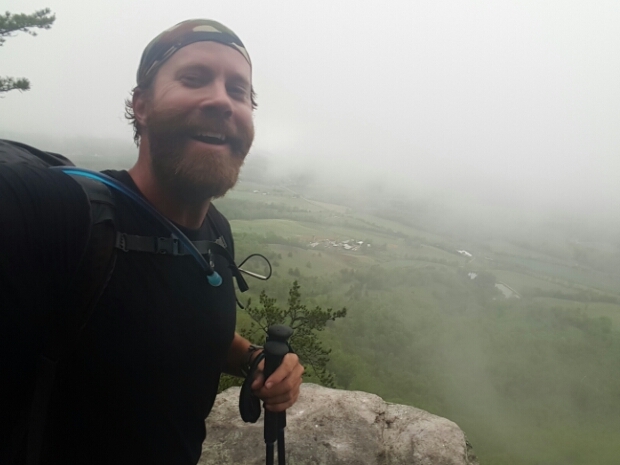 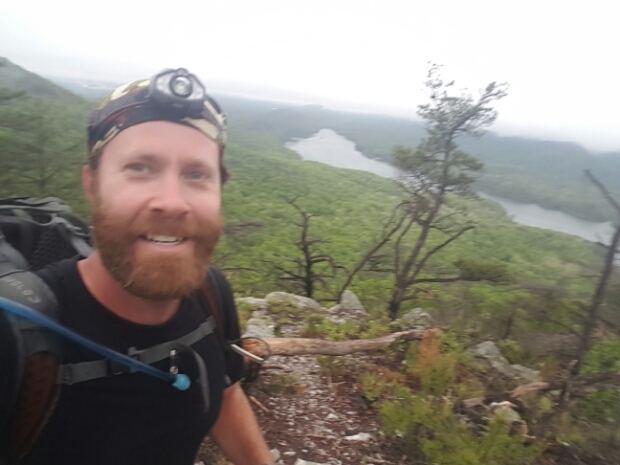 It was getting late quickly. A headlamp was fished out and put on. Thirty minutes went by and the wooden stairs, having around 25 switchbacks, dumped out at the bottom.

The path widened a lot. It alternated between meadows and dark foliage archways that swallowed all the headlamp’s light. It was the time of night where the headlamp may have helped to see, but not dark enough to matter yet.

After weaving through arches and dark tunnels, traffic could be heard nearby. The path finally let out in the midst of Daleville. Looking around, the hotel wasn’t far off.

The Super 8 was conveniently located next to a pizza hut. This would be home for a day or 2. This brought the tortuous 27-mile day to a wonderful end. Sitting on the bed, taking gear off, and watching TV was all it took to make morning show up.

Today was Sunday. Not much would be open. A text came from Branden. The hotel details were given. Looking through the phone, an outfitter was found. Waiting until Monday, BBQ, food, and new gear needed to be bought. Branden showed up to the room enjoying all of its splendor.

Buying a small towel, sleeping bag bivy, new boots, and some clothes completed the morning. Locating the post office, the 15-degree sleeping bag, camera, and a few other items were mailed home expecting warmer weather from here on.