The trip to Daleville, VA

Over 2,000 miles was driven in a few days with a truck from Montana to Pennsylvania.

We met her sisters family where a temporary home was established for roughly 3 days. We took this time to go through gear and leave behind any unnecessary items. Time was spent chatting about why do the trail, gear needed, things to do locally, movies, touring and much more.

Moving forward a few days, it was time to get started. Gear was loaded into the truck and the journey towards Daleville began. The trip took about 2 days. This was due to the driver getting off work in the afternoon.

Staying at a Days Inn for a night, we arrived at the Super 8 in Daleville, VA the following day. We spent time geocaching along the way, eating mexican dishes and enjoying a few beers the night before. Sunday, her sisters family had to leave. Goodbyes were said and tears were shed. Monday, the arduous journey was about to commence.

Checking the weather, thunderstorms were approaching. It was decided to wait until Tuesday to start so day one wasn’t hiked soaking wet.

When Monday came around, the weather was sunny until later that afternoon. While at the outfitters, the rains came and heavily poured for almost an hour. No thunder or lightning, just rain. Heading back to the hotel, we slept eagerly anticipating tomorrow.

As the new day started, packs were put on looking at each other oddly as the weights on our backs registered fully in our heads. “Ready for this?” was said and off we went to the trail head. 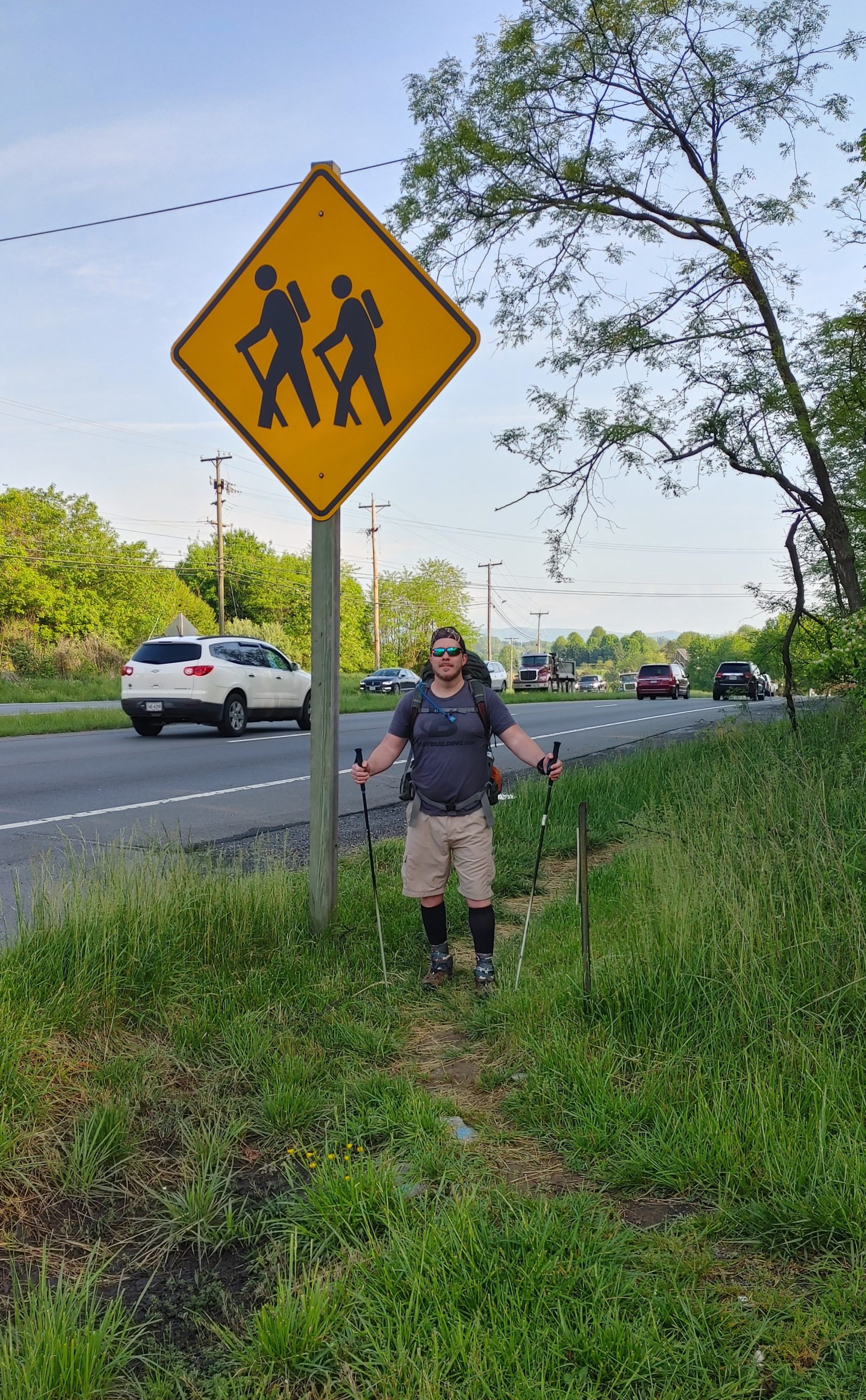 At the trail start point, pics were taken and up the path we went. It was a mildy warm day. The breeze was gently blowing. Hiking for around an hour, Honeybadger was met who was getting back on after 5 days off of the trail. Chatting for a bit, “enjoy your day” was said. Moving for another hour, it was nearing break time.

Bender and Zero (worked a few months in Montana) were met. They met each other for first time in Daleville. After eating some snacks, Poley went by and Light House who was from Maine. Fullhardt Knob Shelter was around the corner. This was home for the night. Only 5 miles was hiked this day. Peace Pipe, Spidey, Loon and Samwise showed up throughout the day.

The intense carwash rains started in for hours. The area got blanketed with a thick fog. Loon and Samwise left shortly after the rains subsided. Dinner and chores were done and exhaustion took over until morning. 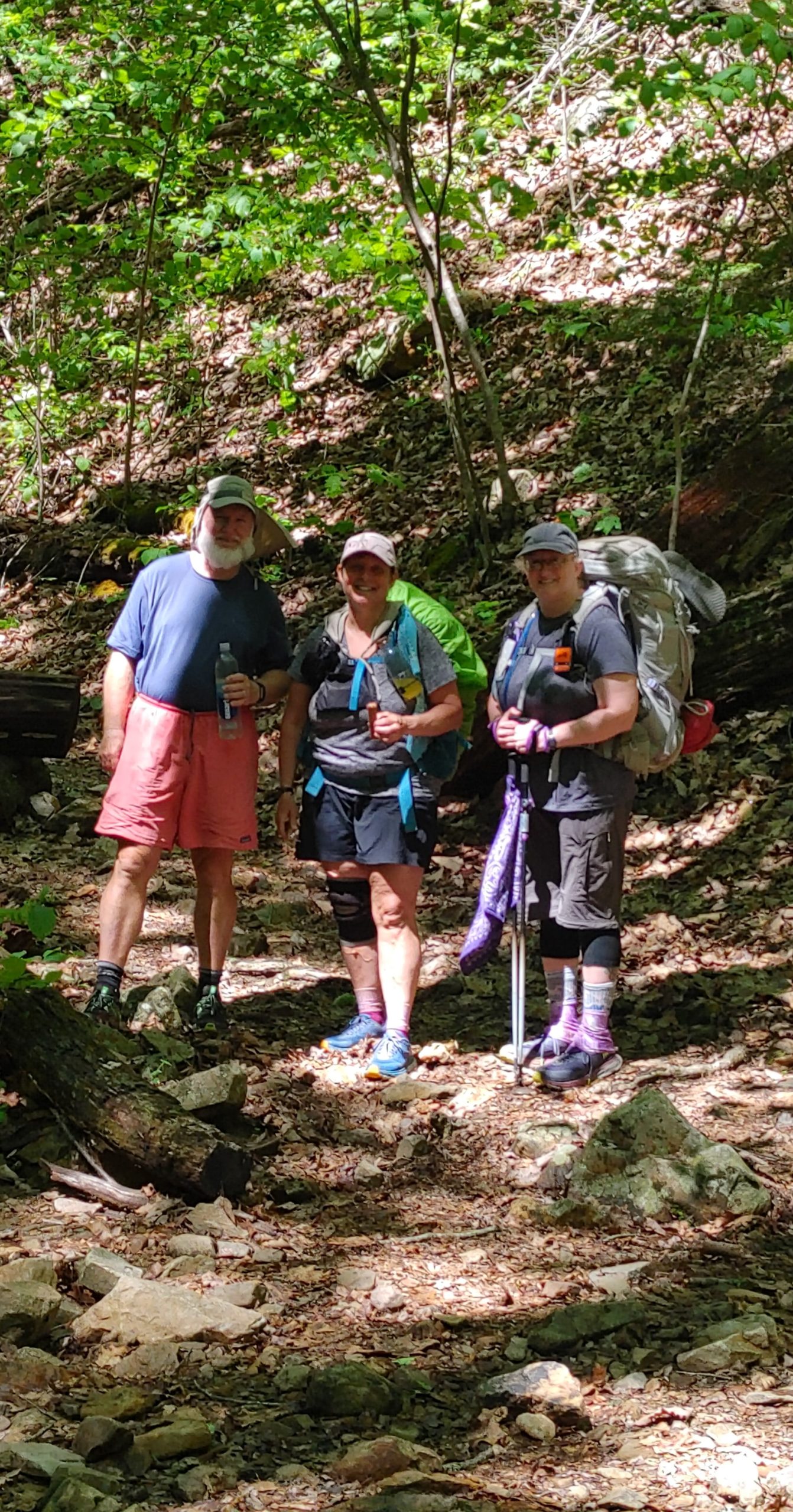 Starting the day at 7AM, the path was continued for about 90 minutes. Subman and Suds from georgia, thru hiked in 2016 while going for 2nd time flip flopping in 2021, were met. Chatting for a while during break and getting water, pics were taken and goodbyes were said. Moving along, the rains began lightly. Hiking to Wilson Creek Shelter 6.5 miles away was nearing. Setting up camp, two hikers named Tex and Barepaw joined.

Waking early and getting moving, an hour and a half went by. Coming out into an overview parking area, 2 older men were seen waving. Heading over, they offered some bananas, trail bars and sodas.

Joe (Firewalker) and Robert Lee gave a detailed history of the area. Thanking them and heading to Bobbletts Gap Shelter was a total of 7.3 miles.

The shelter was off trail about .2 miles downhill. Devoid of people and full of bugs and spiders, a tent site was selected. Later, Spidey came to get some water. He was joining his mom for mothers day and his dad was supposed to join for the duration of the trail. This was home for tonight. 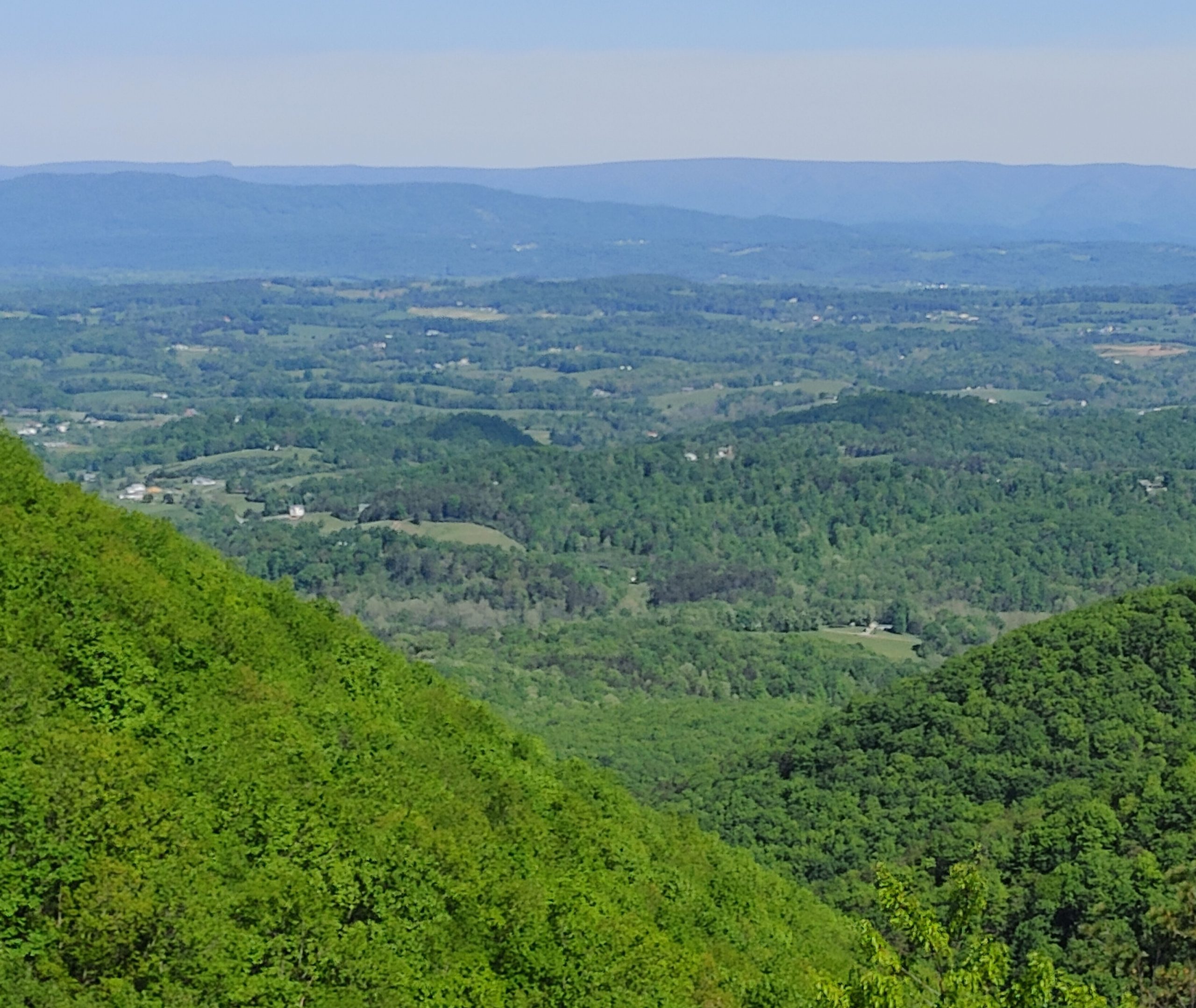 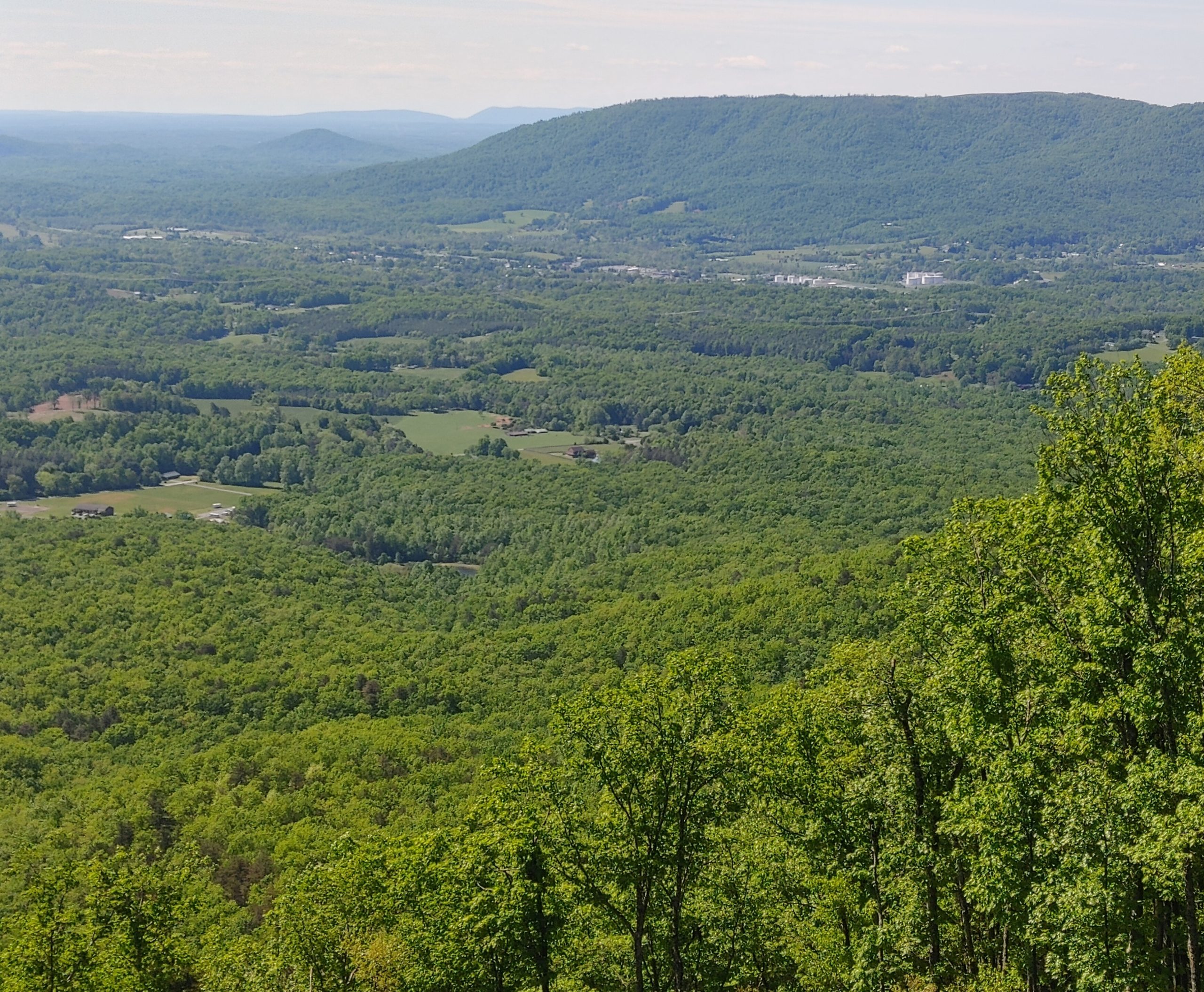 After taking some pics a few more hours were travelled before coming to Cove Mountain Shelter for the night. Bivy and another hiker joined for the night. The rains and cold set in. Jackets were put on and natures noises were listened to intently.

Later that night, the forest fell eerily silent and noises were heard near midnight. Bivy shined a light and seen 2 eyes staring back. After a while, it moved on. Falling asleep, morning soon came.

It was chilly. Hiking 3.4 miles, a call was placed for a shuttle to the campgrounds. Bacon, eggs, toast and hashbrowns were eaten for breakfast. A cabin was secured for the night. Sleep and rest was much needed.

The next day at 7AM heading to the office, it was found out it was closed. Sundays, dang it. Shortly, the lady showed up and bills were settled. After eating the same breakfast once more, the journey renewed.

Getting up early, hiking most of the day was uneventful. 8.7 miles was travelled to Cornelius Shelter for the night. Moving onwards.

At dawn, 2.5 miles was hiked to Black Rock Overlook. Pics were taken. 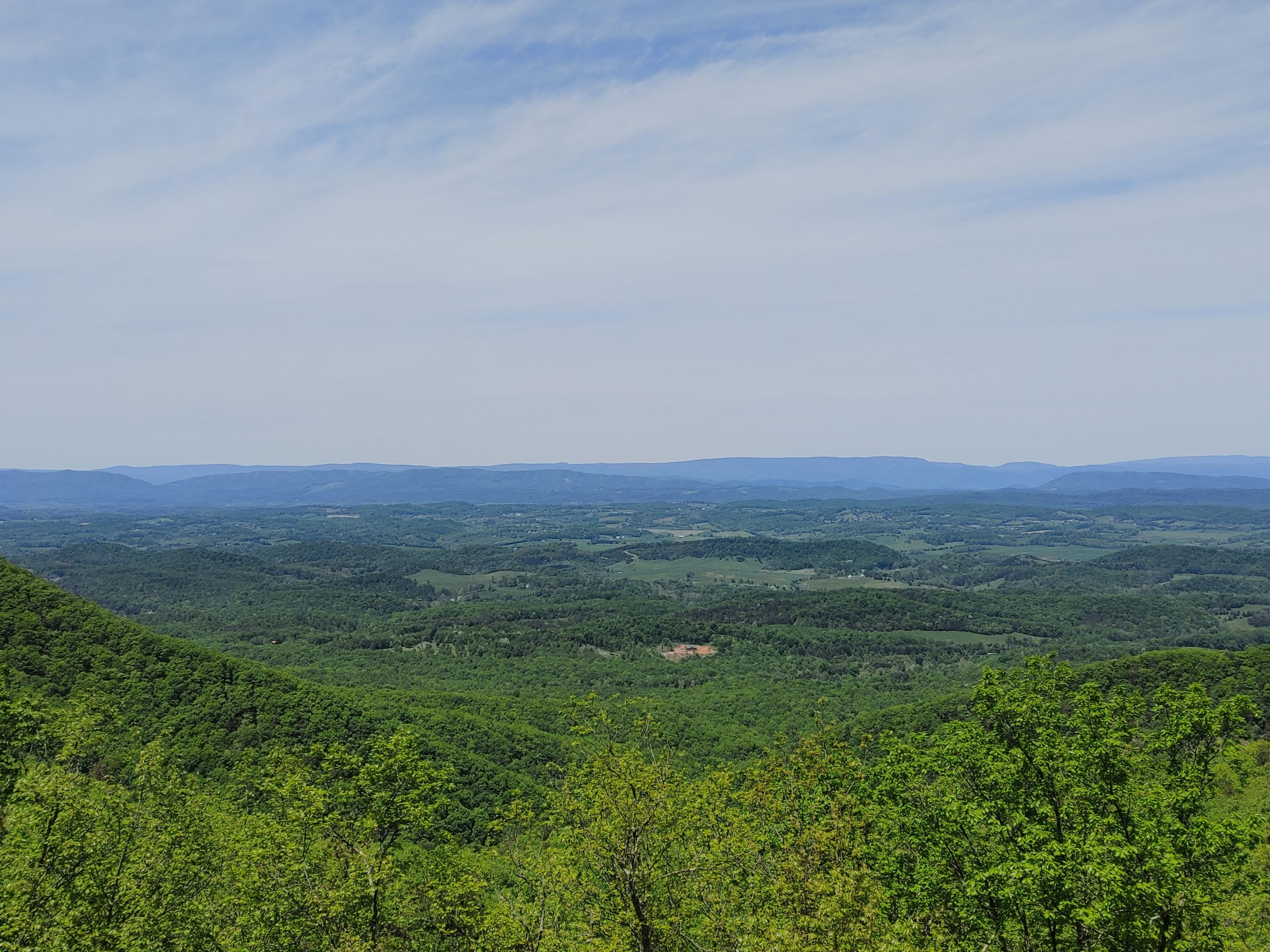 After an hour, the Guillotine shows up. This was a wedged rock justly named. 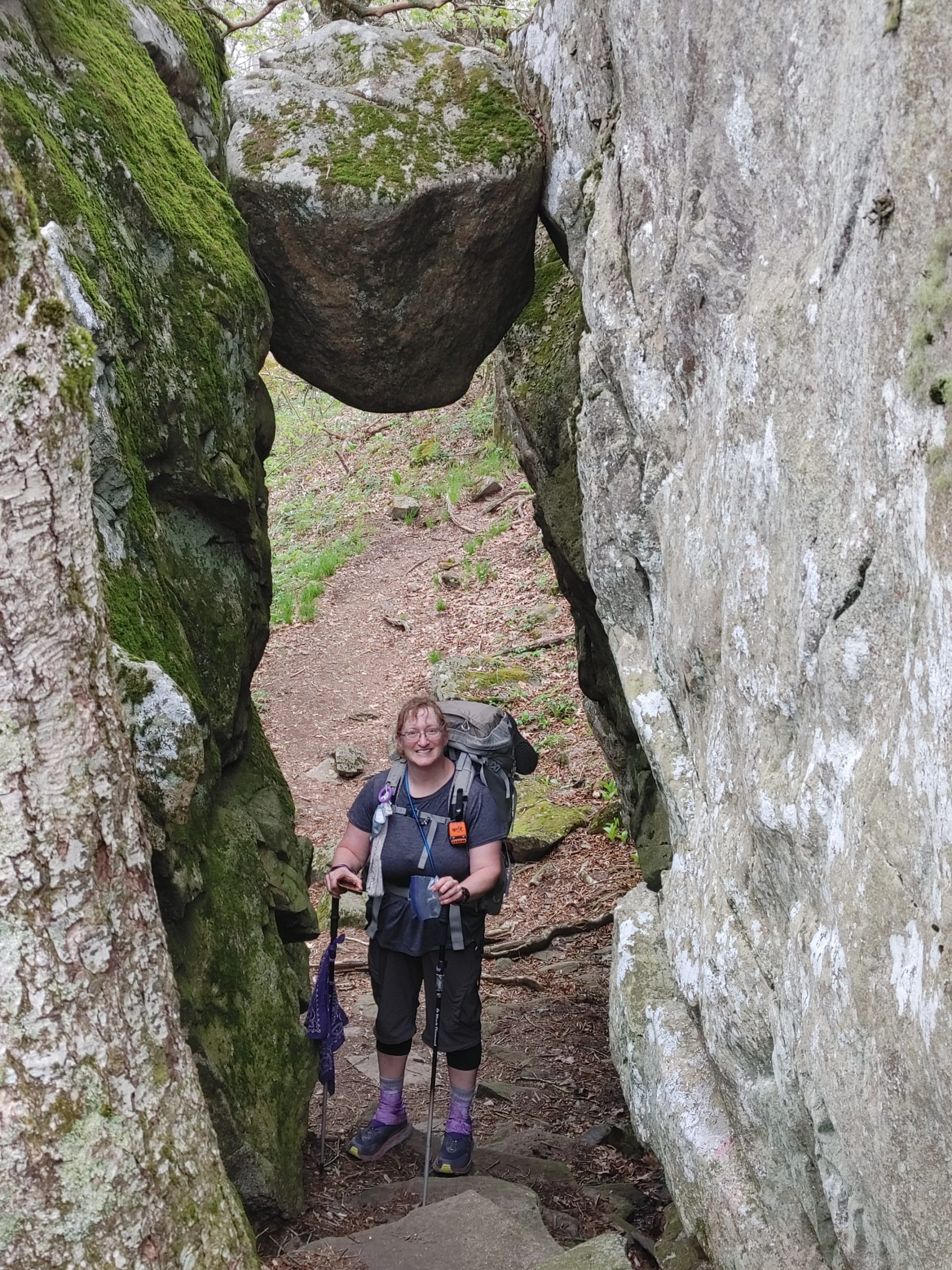 After two more hours, 5 miles more go by. Thunder Hill Shelter is nearby. Sitting down for lunch and going to get water is a bit odd. The water pool had a frog swimming around in it. Looking at a nearby sign, “filter all water from here” sounds like a great idea.

A few miles up, 2 girls had a lunch date setup for her sister and sisters boyfriend at Thunder Ridge Overlook. Admiring the view, the journey went on. A tent site was selected and this was tonights home.