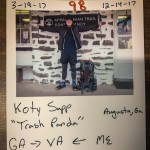 So you want to hike the Appalachian Trail do you?

Why yes I do. I can’t wait for the adventure!

Well, have you ever completed a long distance hike/backpacking trip?

“Well…. no ….”  would probably be the typical response from a lot people who set out from Springer or Katahdin… whatever you fancy.

This in itself can be the downfall of a thru hike. In my opinion, you should attempt long distance hikes/backpacking trips ahead of time to not only build physical and mental preparedness, but also to test gear. The AT is a great undertaking and should be well prepared for outside of researching gear if you are to reach Katahdin or Springer. Now I understand some hard driven individuals will make it without this preparation, but if you truly enjoy the outdoors why not have a few test runs.

Being a person who is rather quick to decide on things that sound amazing almost as soon as I discover them, I decided sometime last November that I would hike the Appalachian Trail as soon as the idea was envisioned. Even though I had never done more than a 5 or 6 mile day hike I had already accepted this monumental undertaking. Being the determined individual that I am I had no intention of not reaching Katahdin. As it is with most aspiring thru-hikers I read and watched every article, book, and video I could concerning the AT. Throughout my plunge into the virtual world of the AT I came across numerous stories of eager thru-hikers with no real experience, a rather common occurrence, falling short of their journey’s intended destination. It was for this reason that I knew if I wanted to be mentally and physically prepared for a 6 month, 2189.1 mile stint in the woods I would need some practice.

As I started to piece together gear I decided to set a date and invite friends for the journey. The location was to be the remote Bartram Trail in Rabun County, Ga and the date April 5th so that I could test everything in mild temperatures.  In my eagerness to dive into the world of extended backpacking I knew that a 37 miles trail with nearly 6 days of allotted time couldn’t possibly be more than a stroll in the woods… needless to say… I was wrong.

For this trip I brought absolutely EVERYTHING I though I would need and I mean EVERYTHING! Thus, I ended up with a roughly 35 pound pack before food and water. For some this works, but for me…. being a 150 pound guy…. nope it was pure hell on my body every step! My pack fully loaded was roughly 40% of my body weight and my  joints were not happy campers. I wasn’t the only one. Everyone on the trip had complaints due to overloaded packs that in our over-excitement and inexperienced, newb-ness had been forced upon us by ourselves.

Having 5 people accompany you on your hike… well… you will all learn something in regards to your personal hiking style. Most profoundly pace. Everyone of us had a different pace. So, as you can imagine our train of hikers did not stay uniform long. With every hill someone was either up someone else’s ass or falling behind. Now there is nothing wrong with YOUR hiking pace or style. The problem lies within trying to make SOMEONE ELSE’S pace or style your own.

In the end, our bodies were shot and thus we could not complete the trail in its entirety. So, after hiking 16.5 miles from Beegum Gap to Rabun Bald to Warwoman Dell we elected to bypass the last major mountain crossing, Rainey Mountain, which was approximately 11 miles. During this “hiatus” we camped for 1.5 days on the West Fork Chattooga, then returned to the trail for a short 2 hour hike to Warwoman Creek, and camped 2 more days. Finally on day 6 we hiked out the remainder of the trail totaling approximately 6.5 miles. Thus, an anticipated 37 mile trek dwindled to 27…. Even after the 3.5 days of rest we were still tired and achy. A lesson to not be soon forgotten.

Video of the hike: