The first 2 days we have been hiking without much to see. Moving forward a few days going into Carlisle, PA. 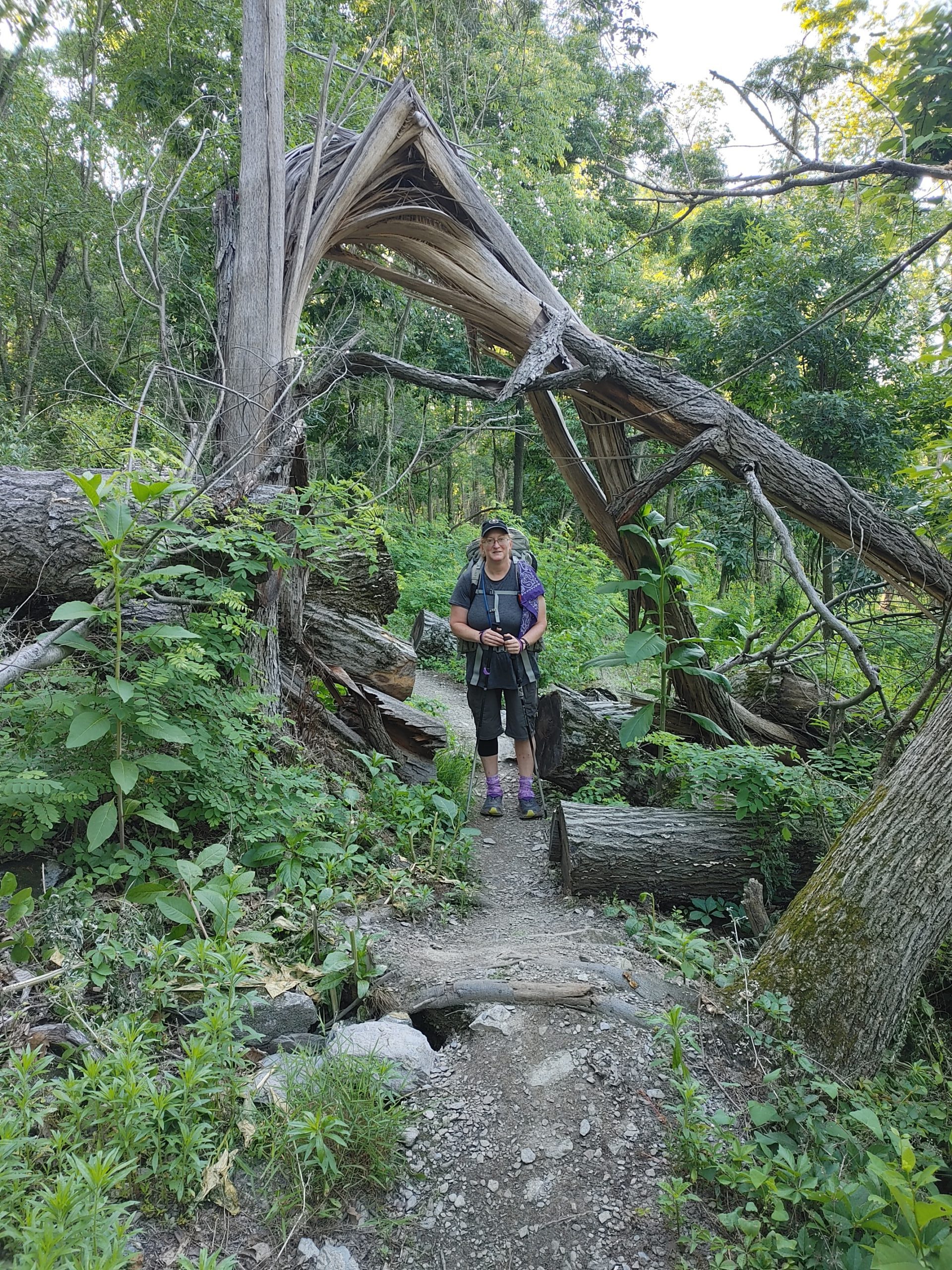 The morning starts at 600 AM. Check out is taken care of and the light rains begin. Staying another day is heavily debated. After putting on the pack rain covers and rain jackets, heading toward the highway was done with great hesitance. After walking a quarter mile, the skies open up with an extremely heavy watery vengeance. Getting back on trail is a lot harder now.

The trail is incredibly slick. Each rock, root, wood and thick mud is a new challenge. 6.3 miles is hiked to Darlington Shelter. A gigantic 100 foot long snapped tree limb has fallen and hit the shelter. Going in the shelter, rain gear is hung and packs are dropped. Jackets are quickly put on to stifle the oncoming intense cold chill. The rains continue for another 90 minutes and subside into a gentle mist. Deciding to move on seemed to be a good idea.

We are soaked head to toe. Rain jackets caused moisture underneath (sweat) and the rain diffused through the rain pack covers. Grrrrr. So angry miserable cold and wet right now. An overwhelming thought to quit the trail right then came to mind. Focusing on a triple bacon cheese burger, the thought was dismissed, 2.5 miles more was travelled to a short grassy meadow. A four stair up and down fence traverse was crossed.

The meadow merged into Route 850. There was a white parked car with the back end open full of snacks, drinks and goodies. Thank you for this!!! Ron was the vehicle owner who lived 45 minutes away wanting to help hikers out.

In the car was Reggie (lab or golden retriever dog) who was impatiently waiting to go outside. Forest Sun and another hiker were already here. Enjoying a few snacks, our host was thanked and hiked the final 5 miles to home. This was Cove Mountain Shelter.

The shelter stairs had been removed and were laying sideways about 6 feet away. A few large rocks were piled up, but 3 feet away from the shelter for access. Reading the shelter logs, it was discovered a rogue porcupine likes to attack this very shelter. What??? Whatever. Bed time is very soon and night swallows the valley in absolute darkness.

Last night at 12:00 AM, a porcupine decides to chew and angrily quill the aluminum flashing on the outside of the shelter foundation. This was recently added to stop the porcupine. TSquared banged on her side of the shelter and scared it off for an hour.

It made extremely noisy sounds like a soda can getting smashed, stomped and ripped open. TSquared gets her flashlight, looks around the corner and shines the light directly at it. This seems to work as the assault subsides. Sleep takes over until dawn.

Gathering gear and checking out the porcupine damage takes 15 minutes. 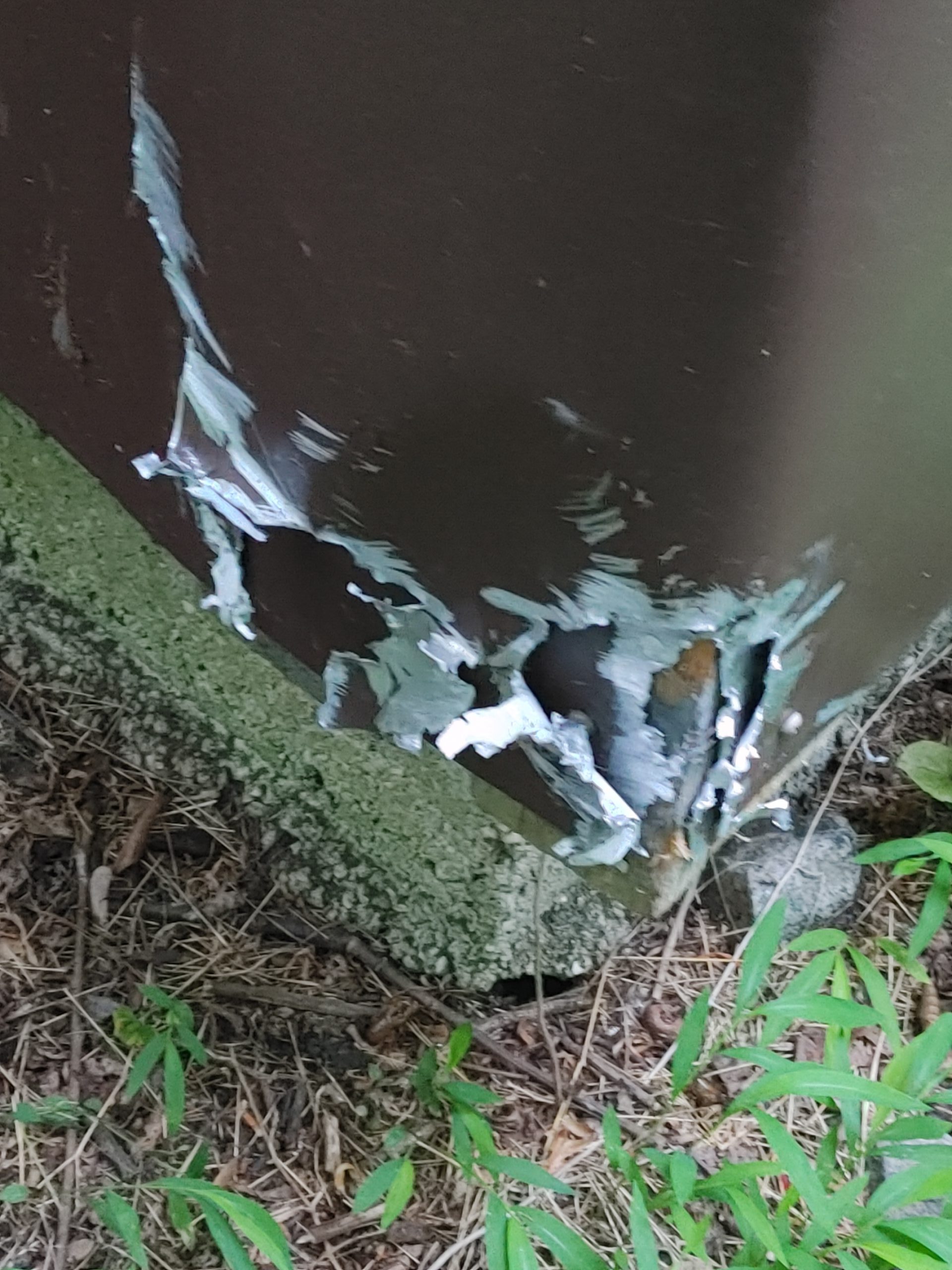 Wow, it ripped it open like it was a can opener. The final 3.5 miles was hiked through medium rockiness down into Duncannon. 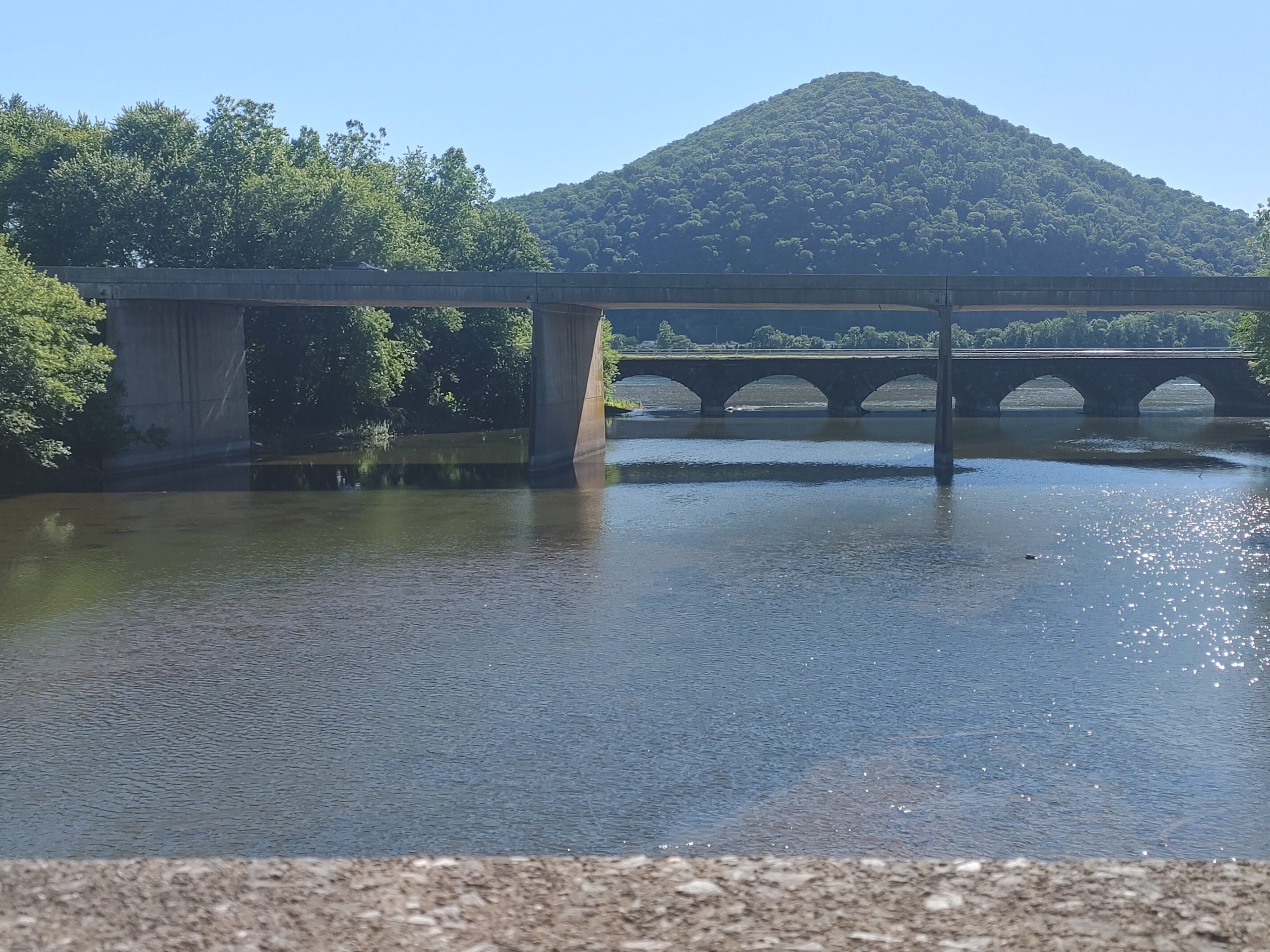 A gas station is stopped at for protein drinks, iced teas, chips and some candy bars before heading to the outfitters called A Little Bit Outdoorsy. It doubles as a hiker hostel in the back half, which was home for the night.

At 700 AM, the day begins once more. The light of the red exit sign illuminates the total darkness. Gear is packed up quietly while heading out the back door.

1.5 miles is walked on town roads. The Juniata River is churning below. The highway is followed for a half mile via a walkway over the Susquehanna River. This finally lets out back into the forest.

After an 800 foot 1.5 mile light rocky ascent, 1152.9 mile marker is stopped at for a snack. A breakfast bar and jerky/cheese combo are fished out. Some loud rustling could be heard very nearby. Assuming it was a white tail deer, (always is) the break continued. Some branches snapped very loudly.

Watching intently still eating, a black bear emerges only 50 feet away. Bear, bear, Bear was said out loud. Yelling, shouting and growling quickly scares the large cub off. I said, “We need to move away Now, at least a mile, we don’t know where mama bear is.” Clarks Ferry Shelter is the new break area. After 45 minutes, gear is grabbed and the last miles are done to Peters Mountain Shelter.

Water is needed. The sign says spring this way .2 miles to the water. How hard could that possibly be? After going down 300 stone steps, (not people steps) 3 liters of water and a 20 ounce gatorade bottle was filled.

Looking up, each step was an incredibly miserable 1 to 2 foot tall rocky ascent. Emerging at the top, sweating out almost another half liter from the journey, the bags were tossed near the packs in the shelter and we sat down. This was home tonight.

Waking at 530 AM, (birds start squawking at 500 AM every morning) it was time to start the day. Hiking 7.0 miles just beyond Clarks Valley Road past the campground area, a timber rattler shows up laying across the trail. I stepped right over the fat snake without noticing it. These photos were taken right after it moved into cover. 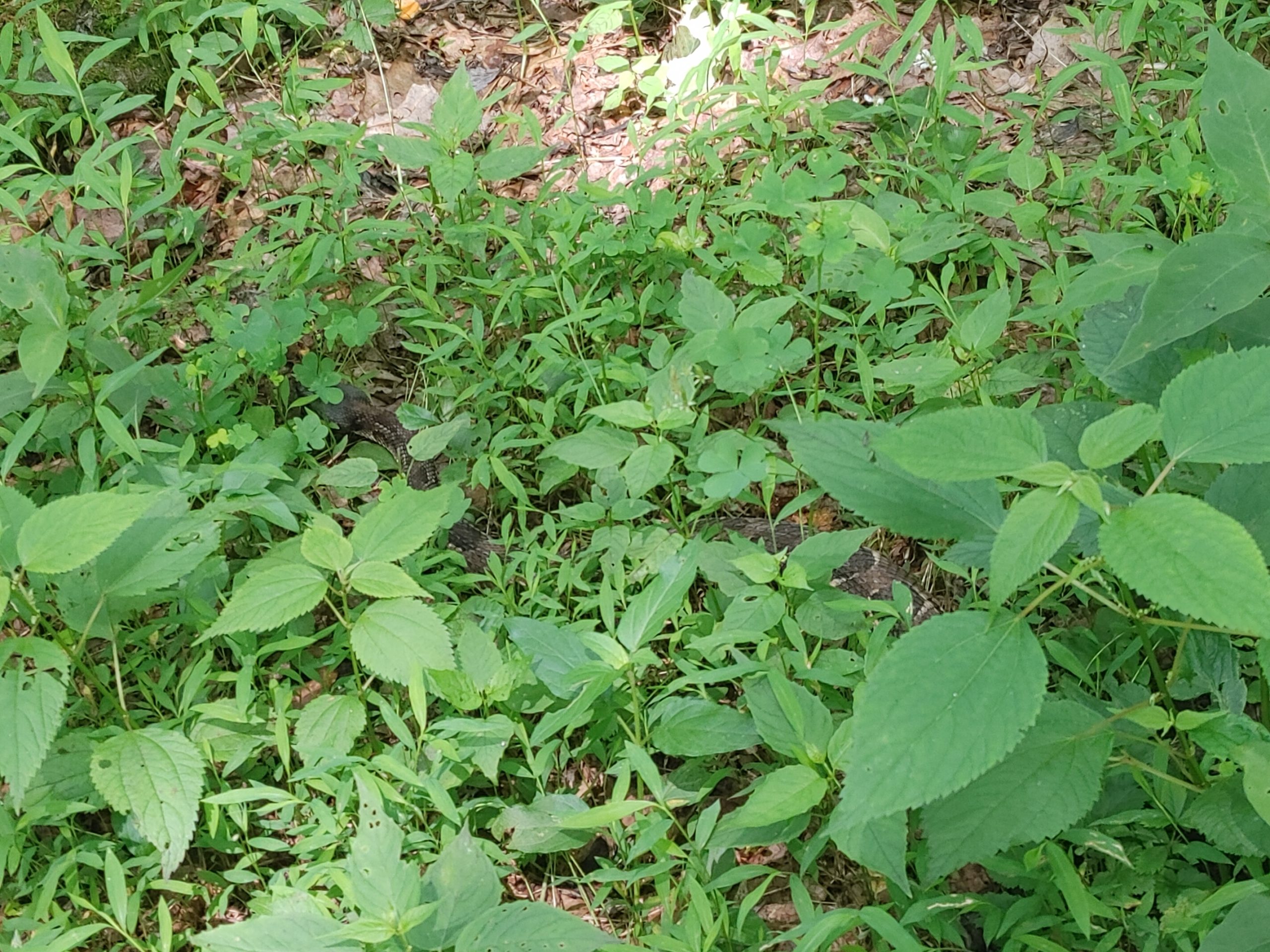 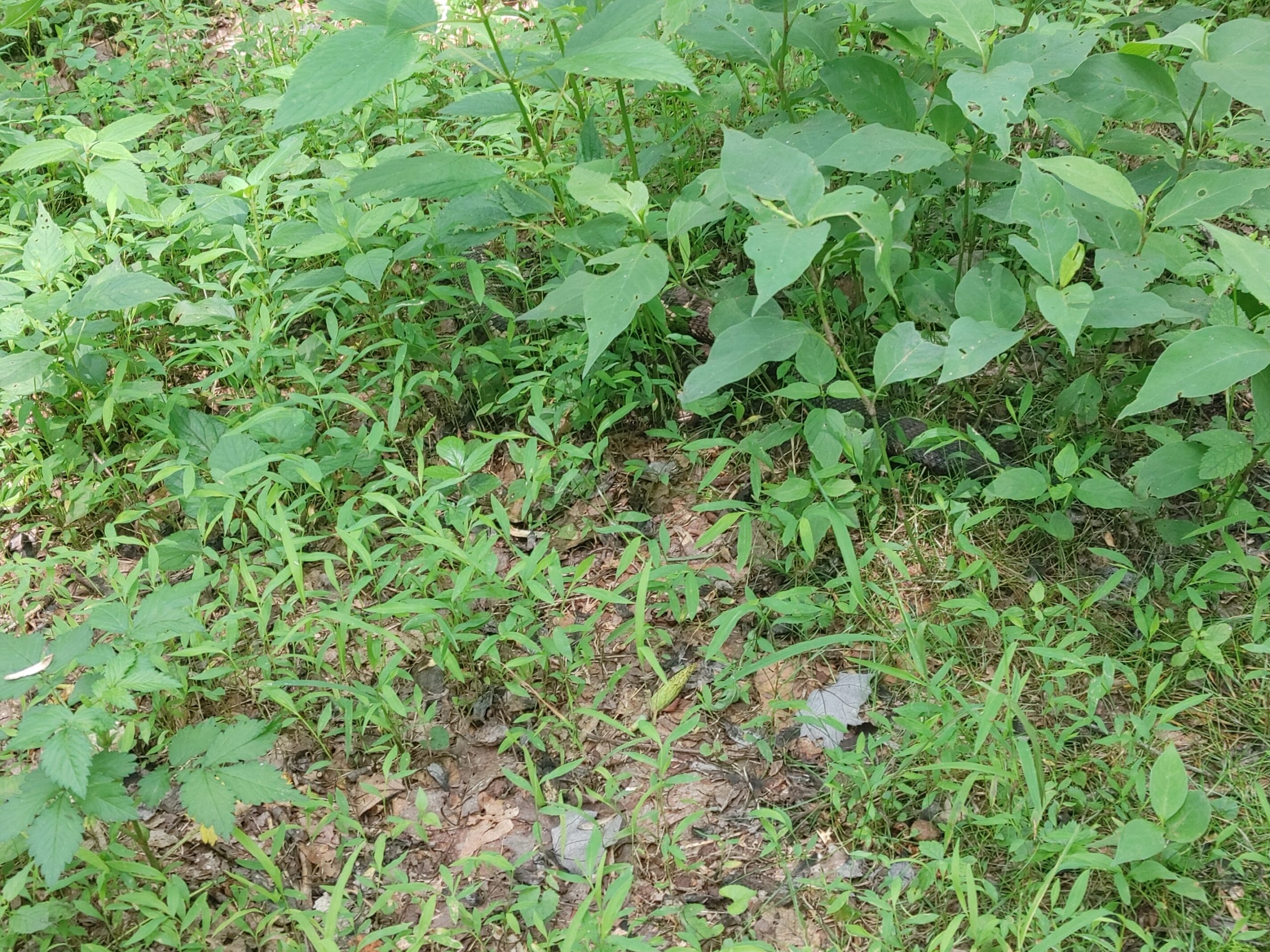 TSquared yells and I stop, looking back to see what happened. The very apparent snake is pointed out. Hiking the final miles to Yellow Springs Campsite is the comfy home for the night.