The new morning arises. With renewed vigor and focus another day commences. What could be better than a great night’s sleep and a day full of energy? A surprise? A treat? Trail magic? What’s a naturalist?

Hiking a few miles, stone stairs ascending 45 degrees could be seen. After hiking upwards for 15 minutes, the path finally leveled off. Looking back, my hiking partner was nearby. An oddly shaped fallen log is seen (named the wooden anaconda). 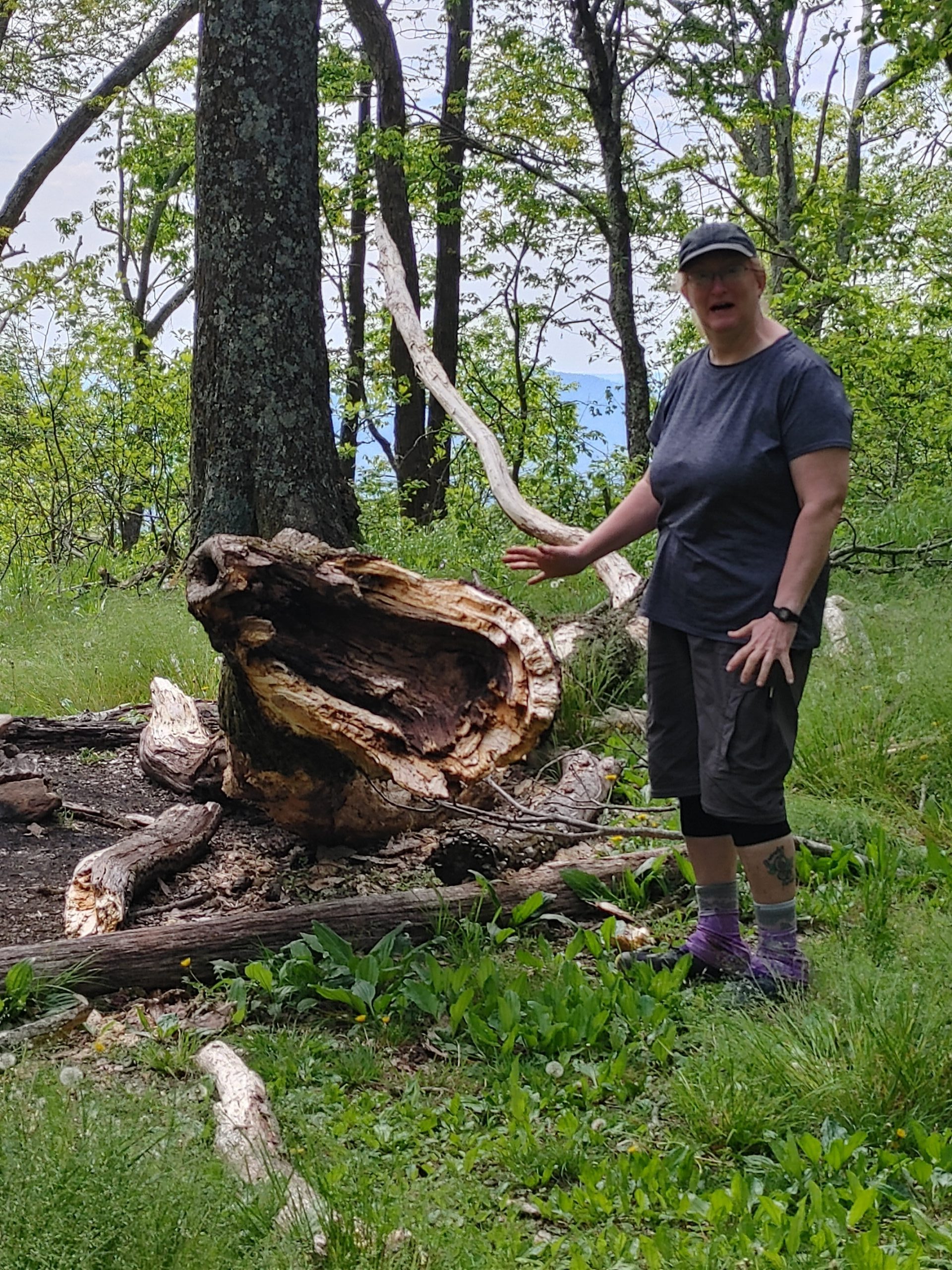 The heat and humidity are a huge challenge. They aren’t present in Montana (our home) at all. It saps 2 times the strength from the body as each step is taken. The path has to be carefully scrutinized to avoid tripping. Looking up is a rarity. In this case, hmmm.

The path winds here and there following the shape of a never ending snake. It winds around many tree roots, rocks and other natural objects. Looking up briefly, 50 feet ahead a guy could be seen. A hiker approached holding a walking stick.

It was noticed he had no shirt on. As he came around the path corner a bit closer, he wore nothing at all. At this point, thought processes are delayed about 5 seconds or more due to heat, exhaustion and hunger. Realizing a warning needed to be issued to TSquared was way too late. As TSquared was following closely, she realized what was going on.

The hiker wanted to stop and have a conversation. This was politely declined and moved onward. About 15 minutes later, a conversation about “why didn’t you warn me about that?” and other things were heatedly discussed. Thirty minutes more passed hiking upward and a sign read “winter green filtered water cache, help yourselves” signed Naturalist Dave.

Bonus points to this man for creating a large 12 plus gallon filtered water cache for hikers. The manner doing so is another discussion. Travelling a bit further, some power lines provided a view. 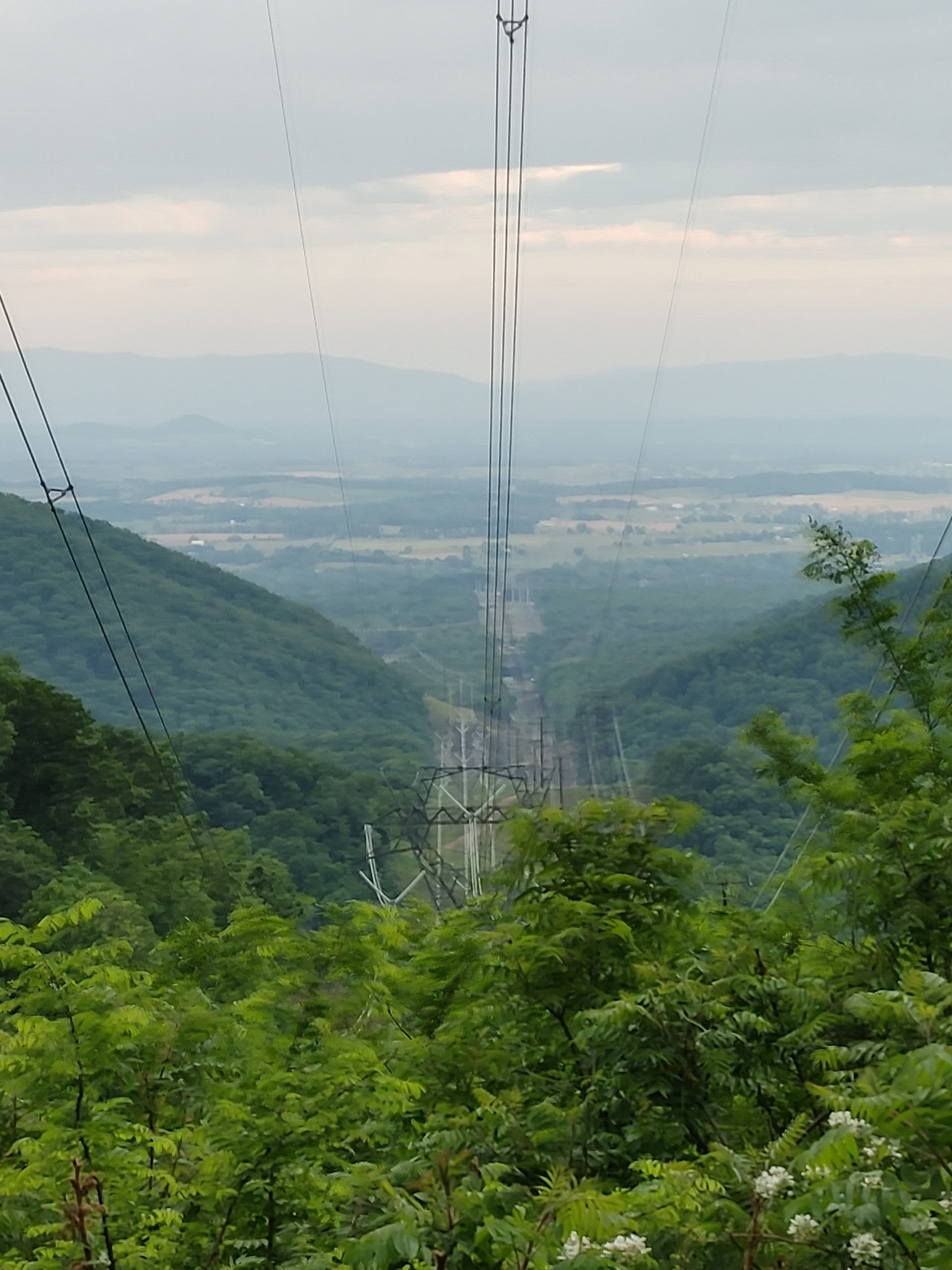 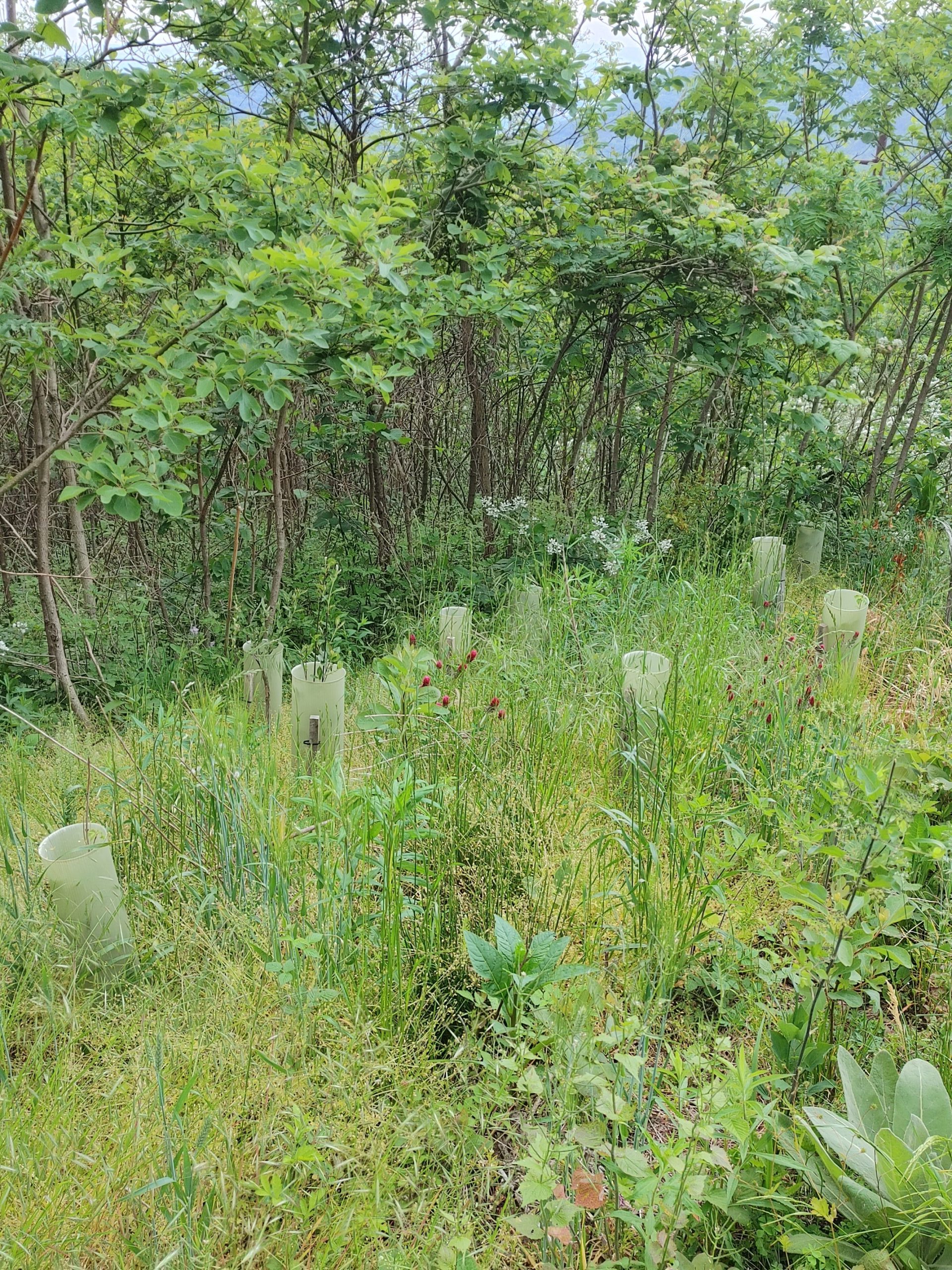 Hiking for another 8.9 miles a tent side was found near Tye River. A hiker named Slowpoke was first met here. He was section hiking to Waynesboro, then reverting to the Grayson Highlands for a flip flop hike. This was made home for the night.

Getting a 7AM start, the 7 miles was travelled to Waynesboro. A shuttle was called at Rock Fish Gap. Shortly, a lady picked us up. Heading to the hostel, a home with a stanimals sign came into view.

It was a white house with a manicured green lawn. Inside were standard bunks, 1 shower, 1 laundry, places to charge electronics, candy bars and a massage chair.

A nero (miles hiked during that day) zero (no miles hiked that day) was spent here. We got put in the airbnb across the way, due to some mix up for 1 day. Later the next day, we came back to the hostel and got a room downstairs next to the laundry room. Food was needed.

We ate at Hardees for breakfast and lunch was at The River. We had burgers, poppers, loaded fries, and beer. 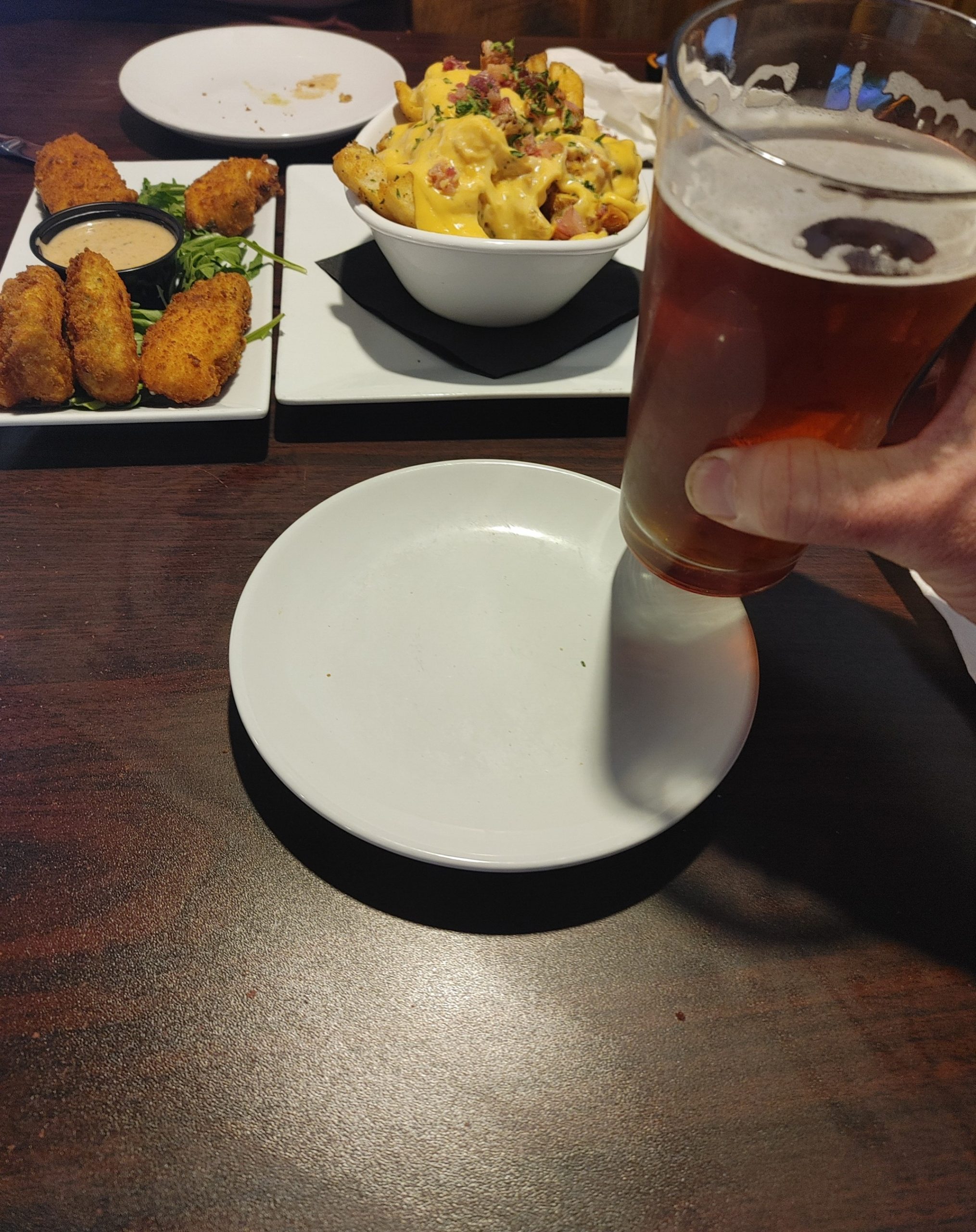 Noticing some friends were here also, a pic was taken with Transporter, TSquared, Maple, Super Girl, and Super Mom. 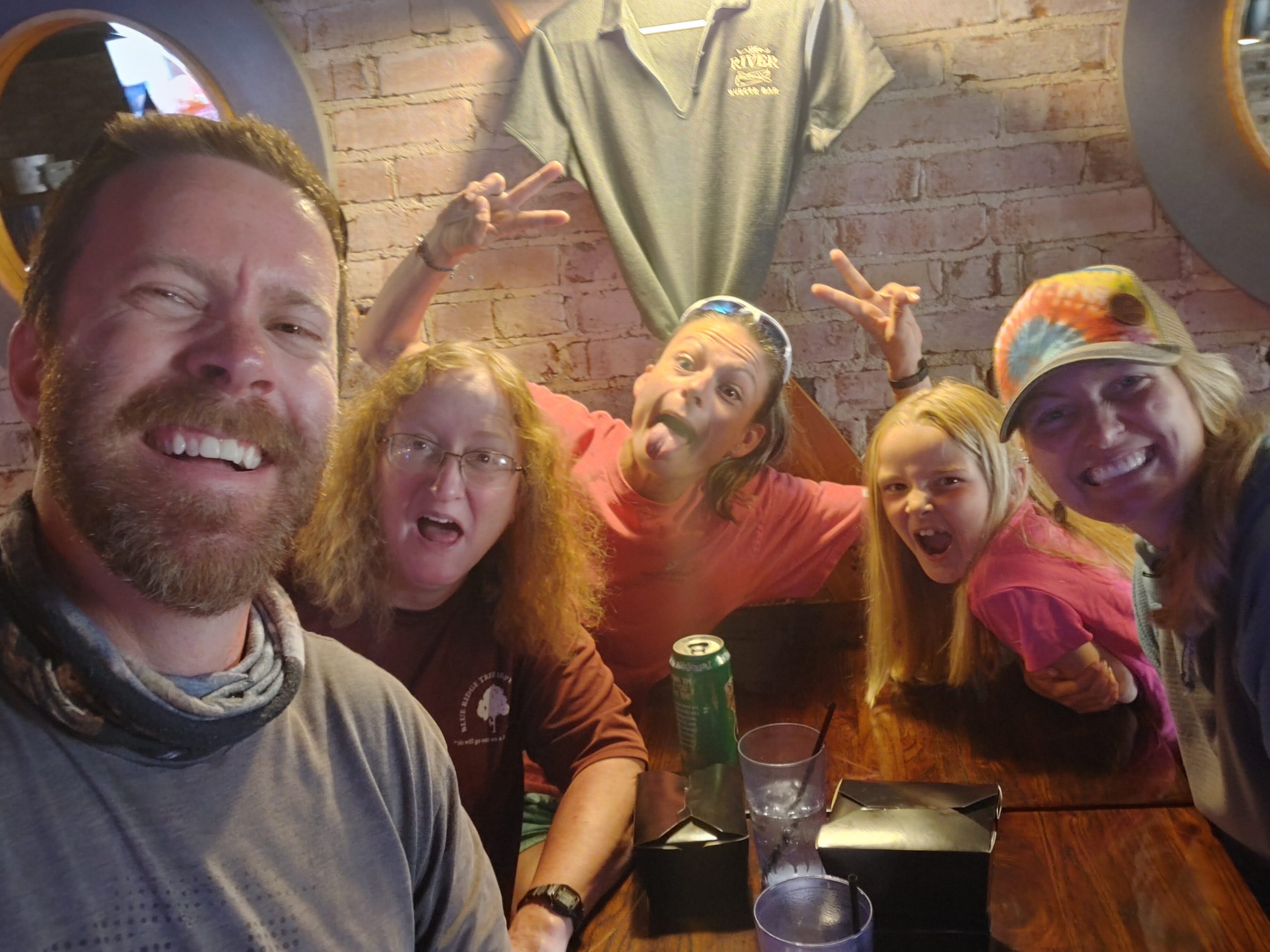 After indulging, we headed back to the hostel .7 miles back. Fast forwarding to the next morning, the shuttle dropped 4 of us off at Rock Fish Gap.

The Shenandoahs (Days 1 and 2 Foggy)

The morning started out with extreme foggy weather. There wasn’t much that could be seen on this day. Hiking 7 miles, nearing the Calf Mountain Shelter, some thigh high grass with a narrow path was travelled. TSquared was in front when suddenly, the grass rattled loudly. She jumped up after a few seconds and ran down the path 50 feet ahead like a gazelle. This made a problem.

Looking around, a stick was grabbed and tossed in the direction of the rattle until it stopped. At that moment, I ran quickly ahead to join up with TSquared. Heading down the final descent to Calf Mountain Shelter, it was decided to tent because of a large wolf spider in the shelter. This was tonights home. 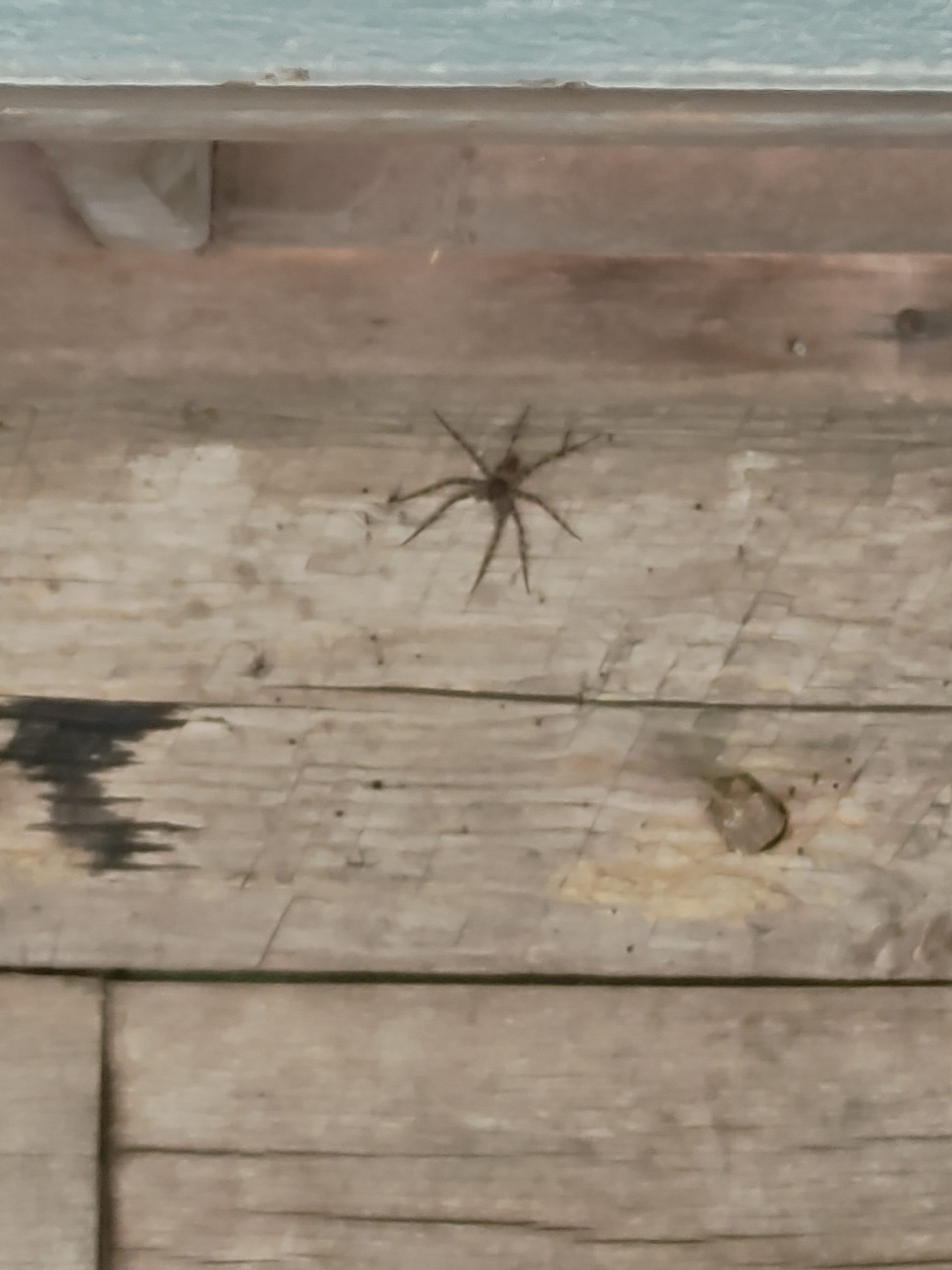 Starting early the next day, 6 miles was hiked. The path was mostly straight. It had subtle ups and downs devoid of roots, rocks and covered with pine needles. A complete dark colored snake was asleep across the path. 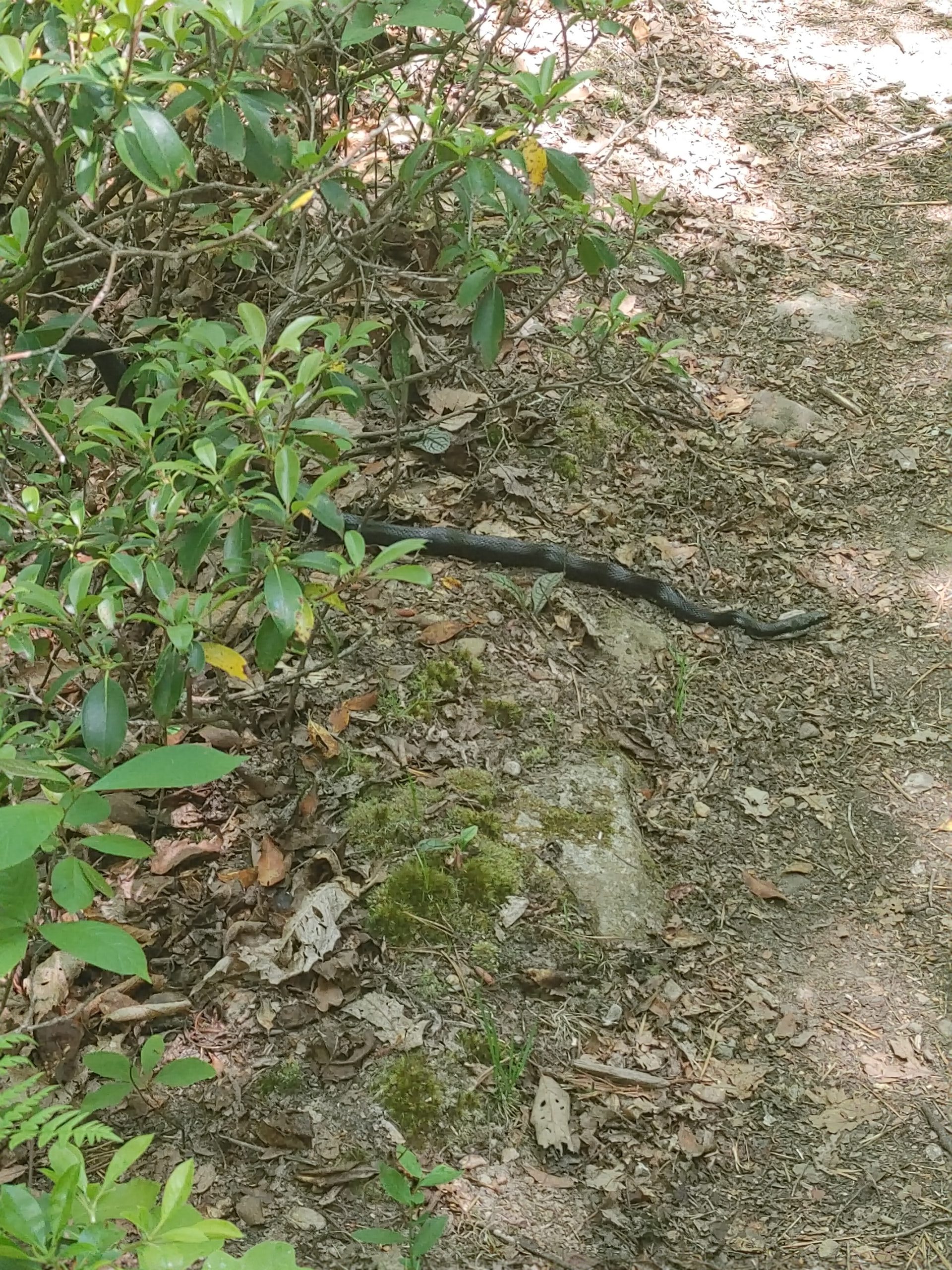 Taking a picture, the snake was gently tapped on the tail. It awoke as each eye openend and the tongue flicked outwards. Slowly it moved off the trail. 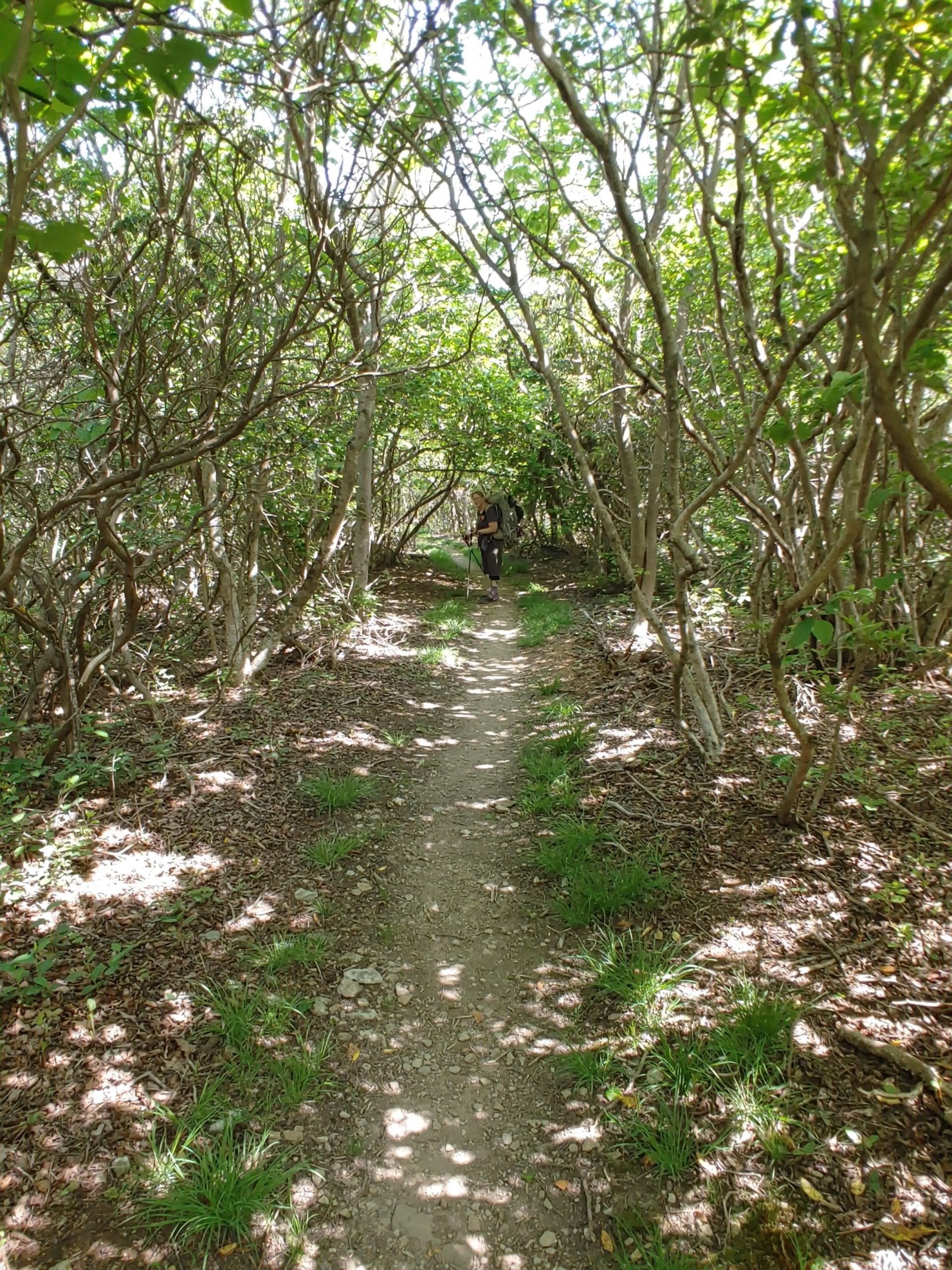 Some tree tunnels were travelled for a few miles leading to a parking area. This was a good break spot. Downing trail mix and kodiak bars, 7 more miles was traversed. BlackRock Hut was nearby. This was tonights home.

Starting early, a half mile was hiked. Black Rock panorama was climbed. It was a very large rocky area with a wide open view. The camp store was needed for supplies.

The Loft Mountain Camp Ground was headed towards at 6.6 miles in. Hiking through thick fog, the store was found. 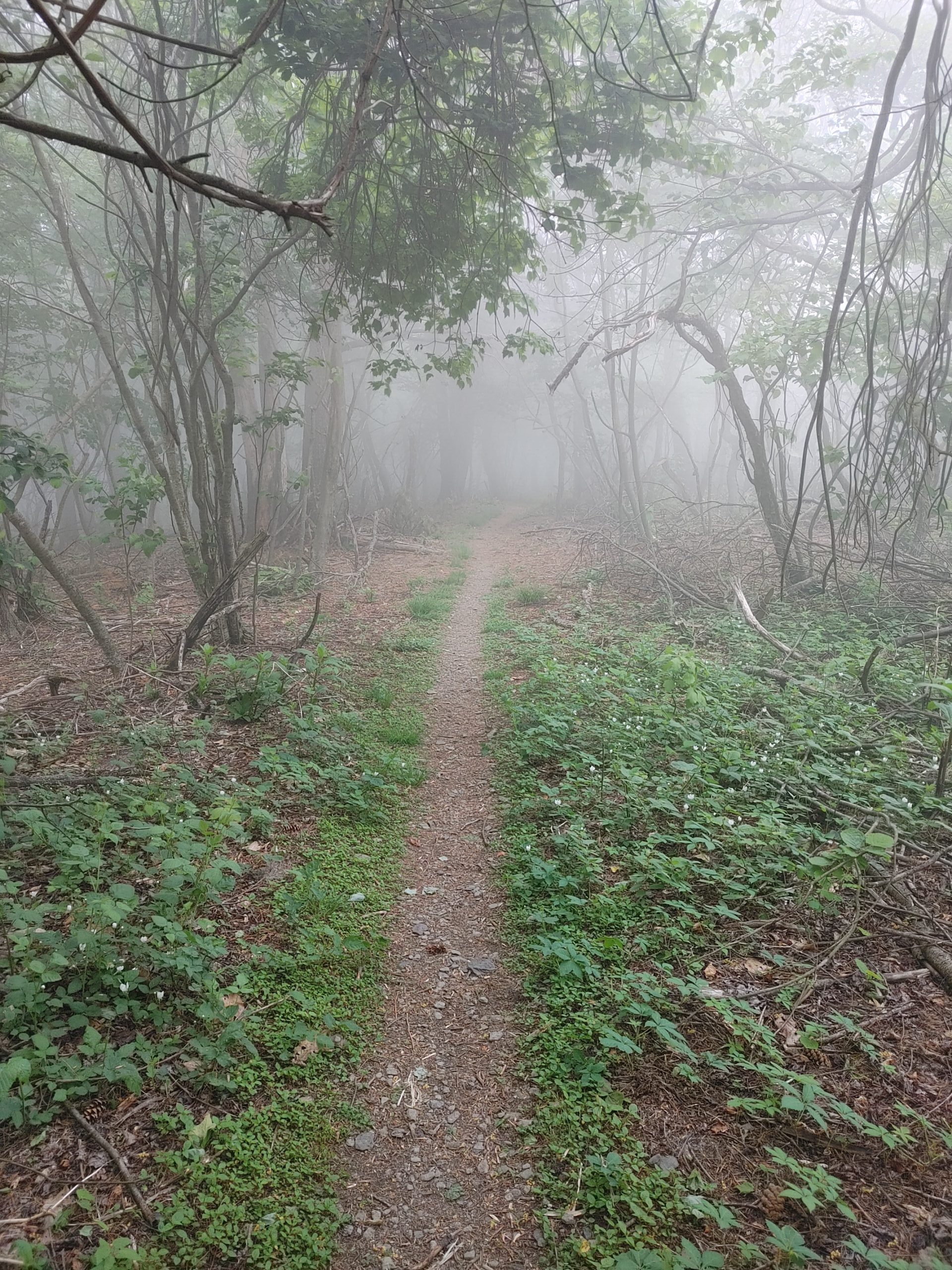 Drinks and snacks were bought. A small covered outside hallway was here with benches and outlets to use. After staying an hour, the remaining 7 miles was travelled. The Pinefield Hut was nearby. This was tonights home.

Starting at the suns early light, it rained all night. 3 miles before US 33, a few day hikers offered skittles and cookies. These were accepted and devoured instantly. Moving a few more miles, an overlook came into view. 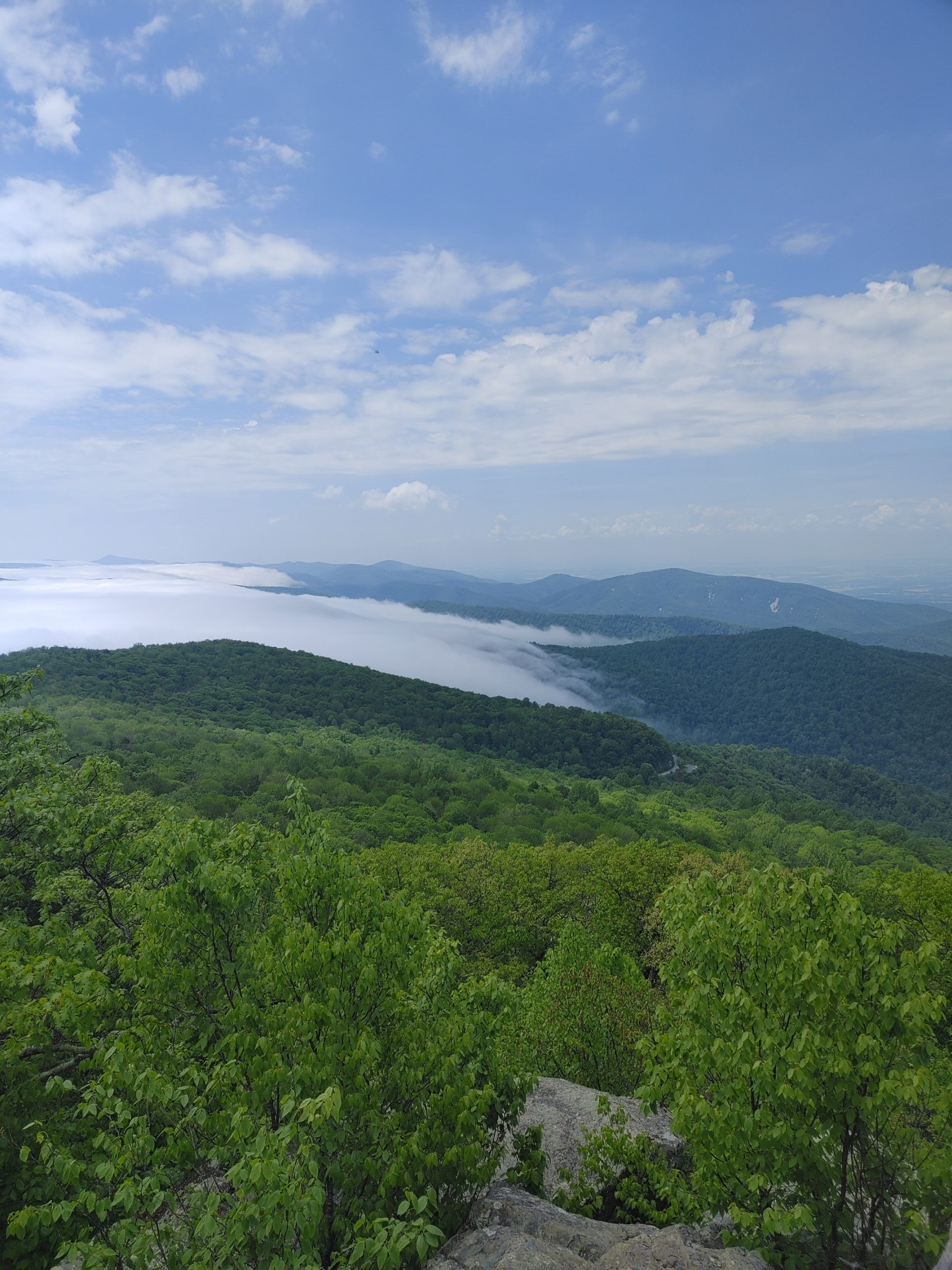 Hiking to Swift Run Gap US 33, Junkyard Jim and Sug pulled over offering water, nutter butters and dr peppers. Eating happily, a ride was asked of these two towards Elkton, VA.

Agreeing, they dropped us off in Elkton at the outfitters after we thanked them. 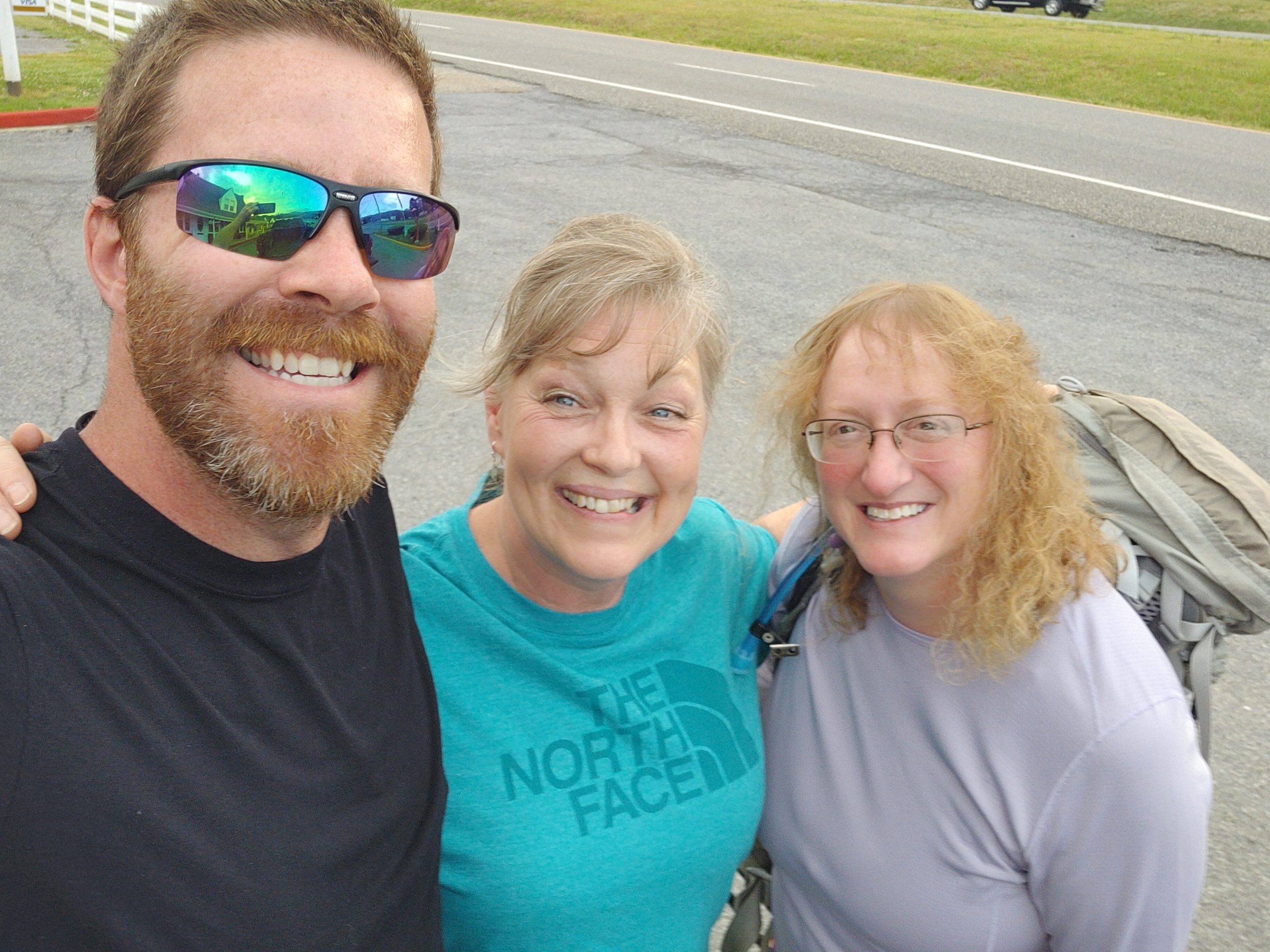 This is where Ginny was met and her dog Kora. Greetings were exchanged and food was purchased. Shower and laundry services were offered. She arranged for lodging when no one answered our calls, suggested a great burger and beer local place and shuttled us to the lodging for the night, after she closed up shop at the outfitters.

We had received trail magic 4 times in one day. That is a first, but wonderful experience.