Starting at dawn, 2.5 miles was travelled. A fenced area with a newer dual board bridge next to it came into view. These are used to get above the muck or constantly wet and mudded areas. 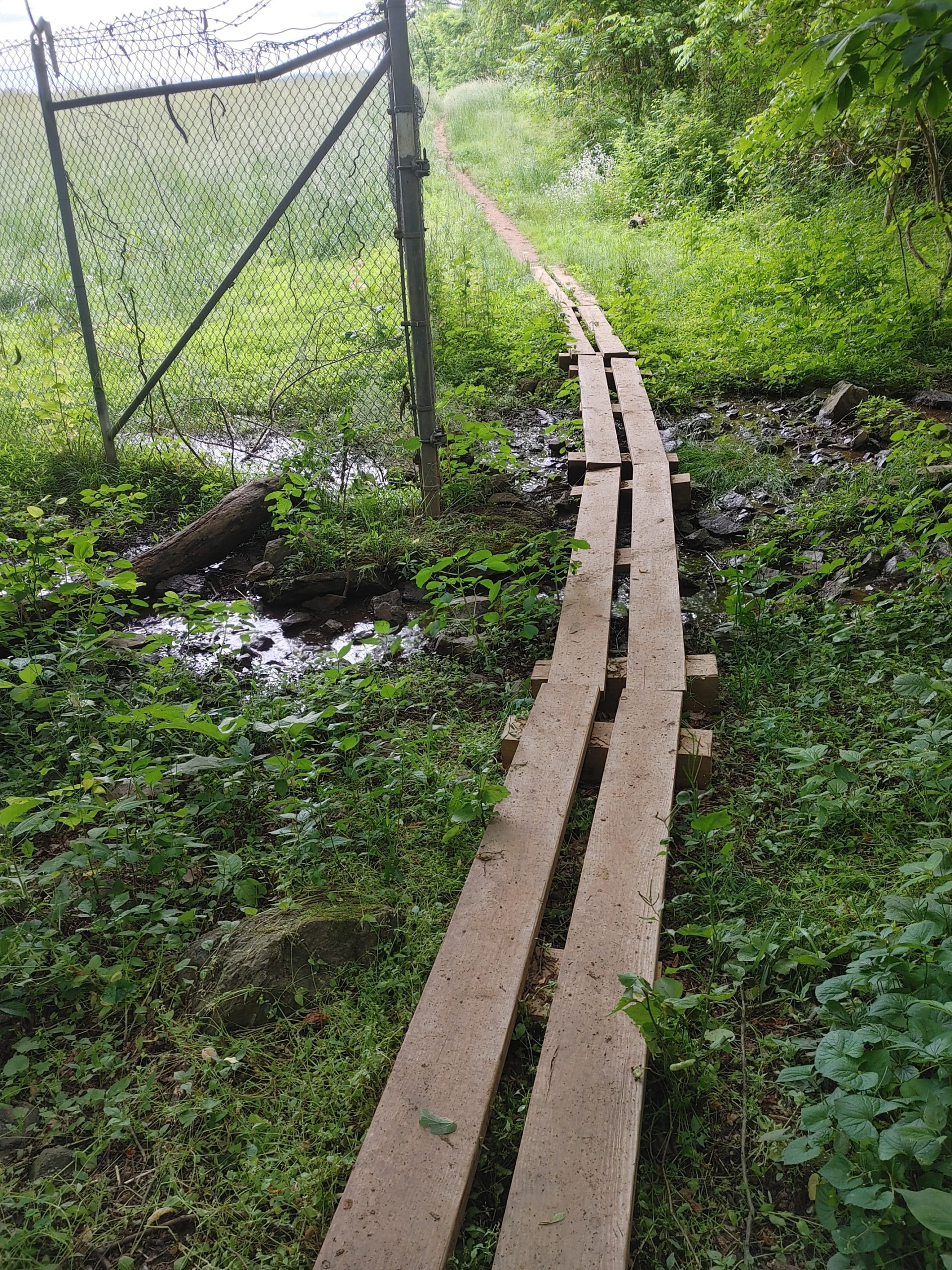 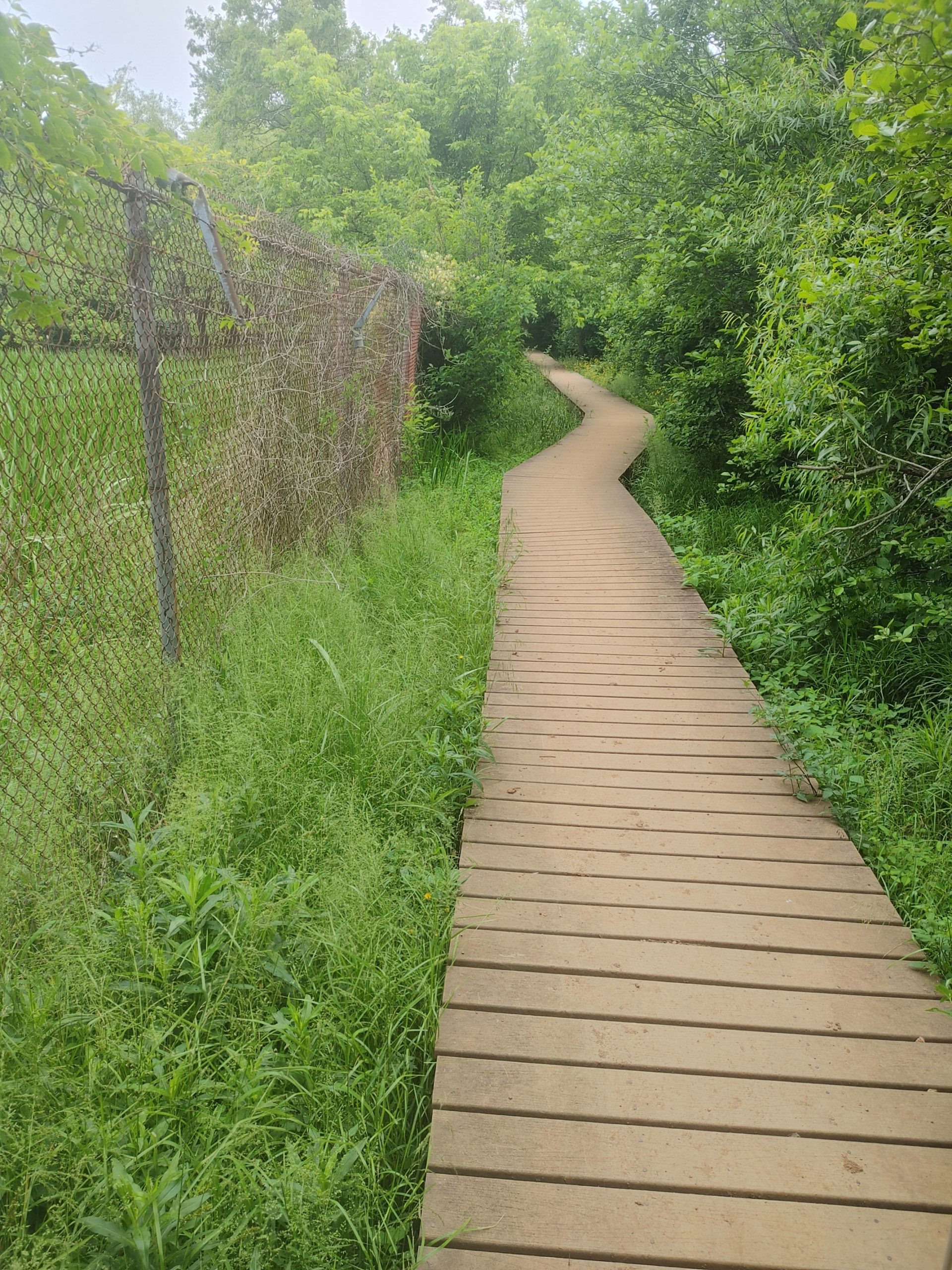 Following this for approximately a half mile, the highway emerged. This was the pick up point for the shuttle to Front Royal Stumble Inn. A call was placed to summon the shuttle. A van showed up with the logo on the side. 2 of us piled in.

The hostel was a few miles in to Front Royal. Front Royal was an amazingly well established city. The van needed some fuel, so a gas station was stopped at. A few protein and iced tea drinks were purchased. The hostel was only a few miles away. The turn to the hostel was a heavily wooded forest area. This looked like a turn you would take to go to a rented cabin. 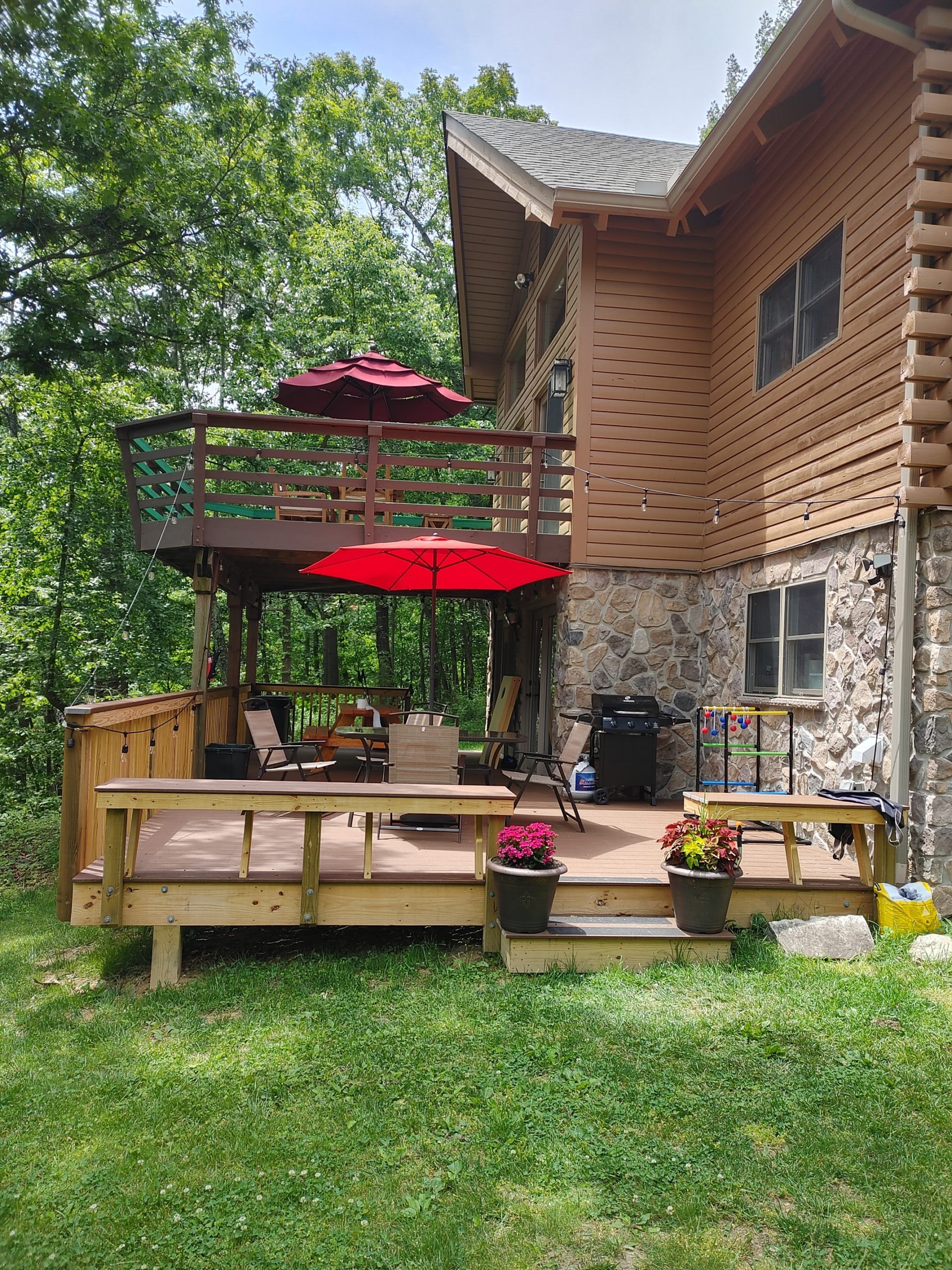 After a half mile, the hostel could be seen. It was a newer building with 2 stories, 2 decks and stairs winding up the outside to the second floor. Upon opening the van door, the cicadas were extremely loud.

The inside had oversize laundry, places to charge electronics, frozen food, hiker boxes and a huge shower area. Guitars were hanging on the wall saying play me. Bonus!!!

During the town visit, the post office, Front Royal Brewing Company, Outfitters, Martins Food Store were explored. The next day.

After the shuttle dropped us off at 522, it was an extremely hot, humidly muggy day. This was the kind of day that made you sweat while standing still. The day began with a short winding foliage tunnel. This was travelled for 5.2 miles to Jim & Molly Denton Shelter. Another 1.2 miles was hiked until a meadow was reached. It had neck high grass that hadn’t been trimmed in quite some time. A break spot was needed.

At 8.4 miles in, a bridge with eloquent stone stairs crossing a river was close by. 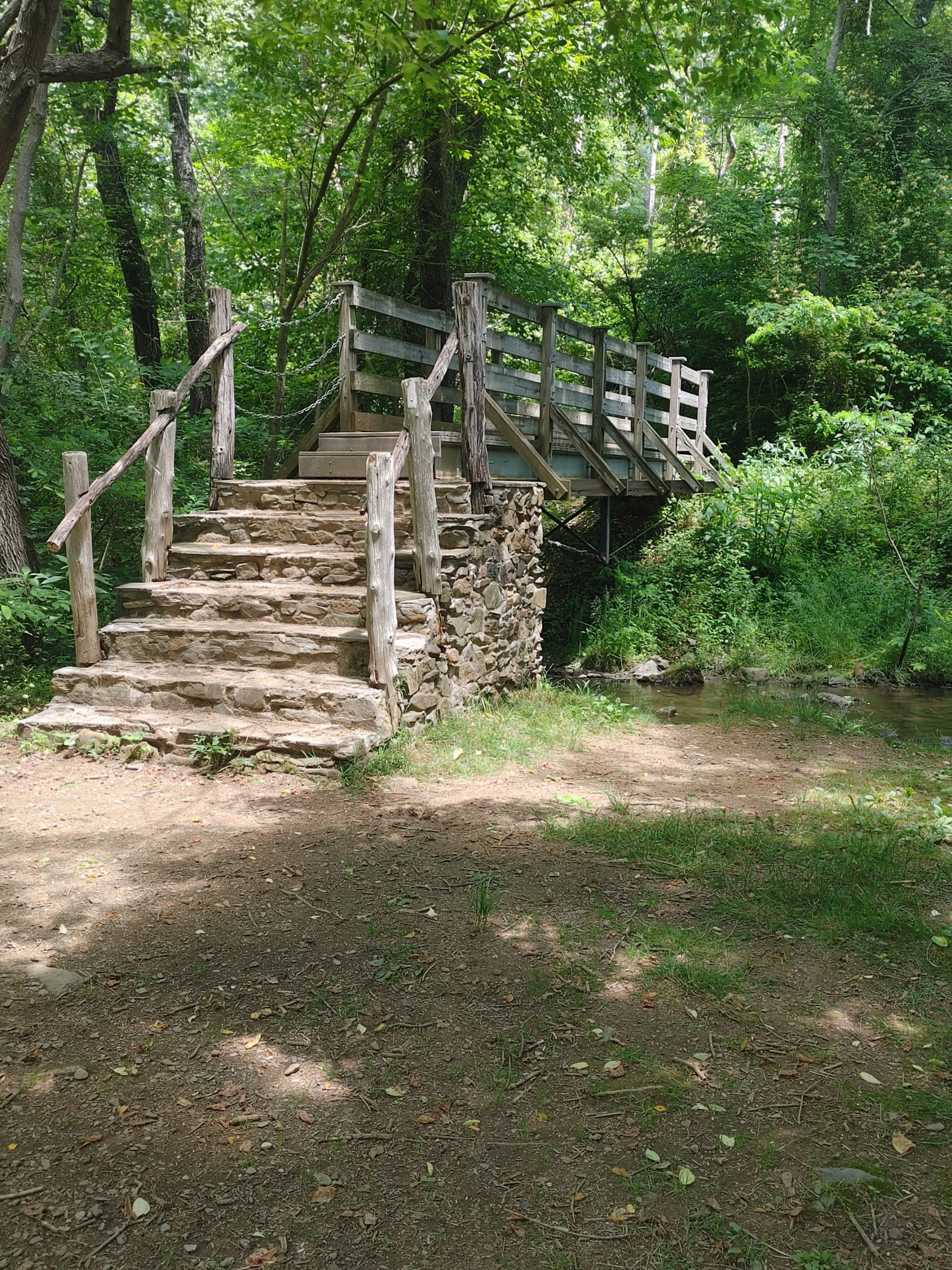 A picnic table begged to be a perfect break spot. Jelly Bellys, peanut butter sandwiches, kodiak bars and pineapple flavored waters were enjoyed for 30 minutes. 10.7 miles was finished heading to Manassas Gap Shelter for the night.

At 530 AM, the day started with a heavy layer of mugginess. 3.3 miles was hiked and a large double downed tree had to be climbed over. 6.5 miles was covered entering the very short endless foliage tight tunnel. This wound back and forth for a few miles. It resembled travelling through what seemed to be a vineyard. The temperatures soared above 95 degrees with an incredible muggy accompaniment. Another 6.4 miles was covered until Rod Hollow Shelter was made home for the night. What is a Roller Coaster? 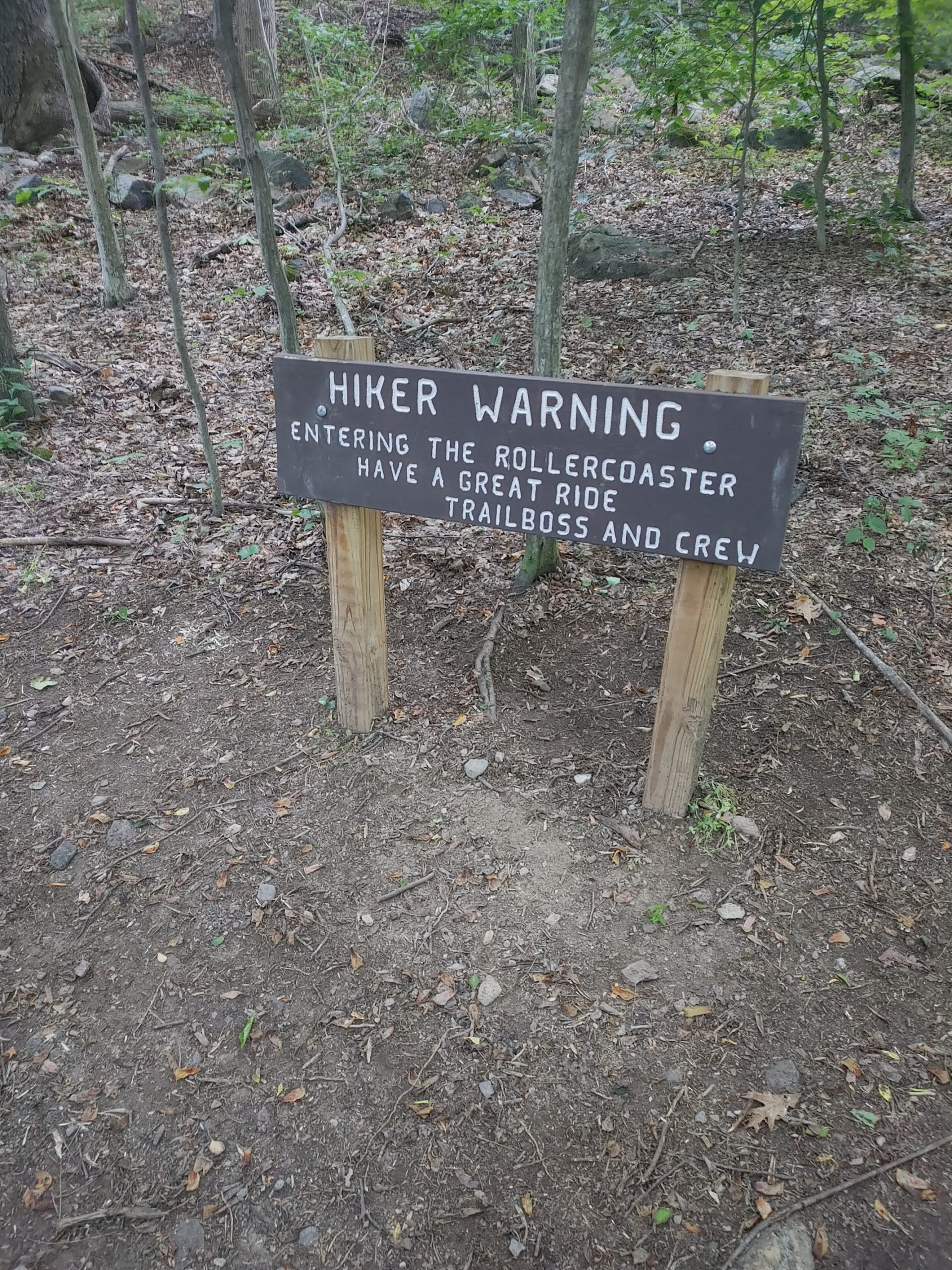 The day broke early as usual. The morning was heavily muggy. Hiking a half mile, a sign read “hiker warning, entering the roller coaster, have a great ride.” What could this possibly mean?

The rollercoaster consisted of 9 hills. The rock coverage is 80-90% winding around everything. There were very few foot placements that did not result in a possible twisted ankle. All paths were 45 to 75 degrees straight up.

Hill (7) mile and a half up, 500 foot gain to Bears Den Hostel. This was the most intense three quarters of the roller coaster. The next morning.

The next 2 hills were not anywhere near as bad as the previous 7. It was majorly muggy. 3.2 miles was covered going to Ashby Hollow. A break was taken eating a peanut butter sandwich, trail mix and a zipfizz energy drink add in. 4.3 miles was hiked reaching the iconic one thousand mile marker. Understandably, the trail length changes and so would this location. This is merely a representation of a signifigant achievement. 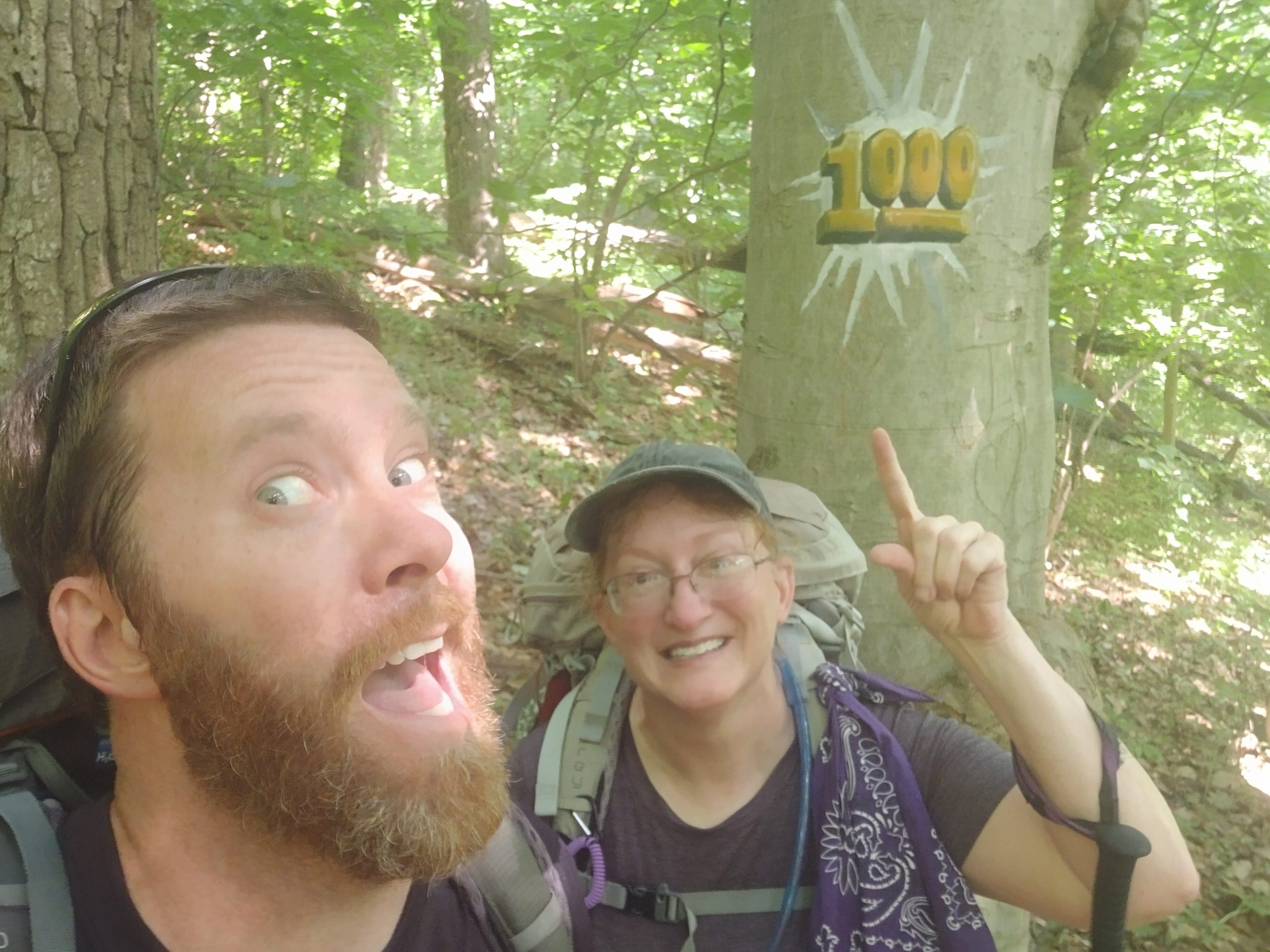 The final milage was travelled to Sam Moore Shelter for the night.

Arising at dawn, 3 miles was travelled to Raven Rocks. The heavy ascent comprised of 600 feet up in a mile and a half. Resting for 30 minutes, one more mile was covered until the VA/WV state line showed up. 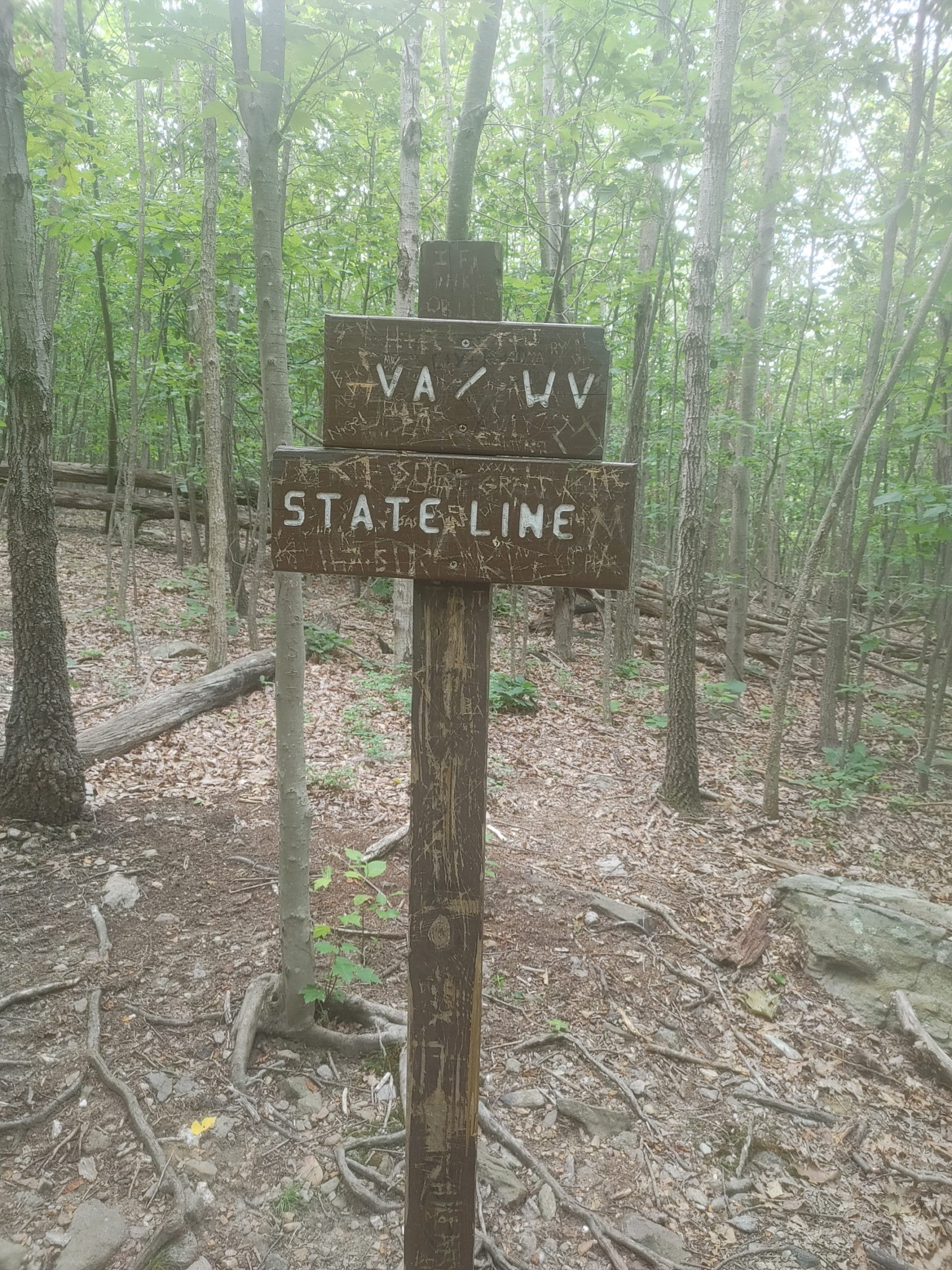 One more mile was travelled and the roller coaster came to an end. Finishing the nights milage ended at the David Lesser Memorial Shelter. The next morning.

4.5 miles was hiked along with the final descent into Harpers Ferry.