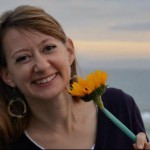 How to Avoid Getting Lost on the Appalachian Trail

It’s a beautiful day. You step off the trail for a snack or a pee break. When it’s time to return to the trail you can’t remember which way you came from. All the trees look the same and you don’t remember if you turned left or right when you took your break.

Or it’s a foggy day in the White Mountains and you’re having trouble seeing the trail markers. You keep following a path of flattish rocks but now you can’t tell if you’re still on the trail, and the fog is getting thicker.

Maybe you wake up at your stealth campsite and realize you have no idea what direction the trail is. Which way did you set up your tent last night? What if you start walking away from the trail instead of towards it?

Perhaps you just signed your name in a register at the top of a mountain and now you have to choose the path to go on your merry way, but there are six paths all leaving this trail register and you don’t know which one you came from much less which one you should choose now.

Getting briefly lost, even on an extremely well-marked trail like the AT, is more common than you might think. Two of the scenarios above happened to me on my thru-hike, and the other two could have easily happened had I not been vigilant. If sense of direction is challenging to you, read on to find out how you can avoid getting lost in the woods.

I never had a great sense of direction. My friend Suzanne used to tease me when we’d go to the mall in high school and I’d come out of a store and proceed to go back the way we’d come. My mom used to say we’d have to tie a string to the back of the car once I started driving, so I could follow it back home.

I knew that I’d need to hone my skills and pay close attention if I was going to hike the AT alone and not get lost.

Here are ten tips for avoiding getting lost while hiking on the AT. I’m happy to report that during my thru hike, I was never lost for more than ten or fifteen minutes and I only got turned around three or four times! Over a 2000-plus mile journey, that’s not too bad!

Any time you go off trail to use the bathroom, look carefully at your surroundings. Make notes of landmarks or large trees or rock formations so you can easily walk back. Turning around to see where you came from is crucial. Also, there’s no need to go far off trail if you’re just peeing. Keep that trail in sight! You can also leave your pack by the trail and make sure you can see it from your bathroom break spot. Remember all leave no trace rules when relieving yourself in the woods.

2. Retrace your steps when you’re unsure

When you see you’ve lost the trail, turn around. Retrace your steps to the last definite marker if possible. While you’re retracing, look carefully for other options or turns you might have missed the first time. Pay close attention in fog, as it’s easier to miss important landmarks. Sometimes you’ll need to look at clues in the trail at your feet along with landmarks up ahead. I missed a turn on a foggy afternoon in the White Mountains between Carter Hut and Imp Shelter because it was a super-hard left turn, and the trail continued ahead as well. I knew I had lost my way when the trail I was on petered out into blueberry bushes, so I retraced my steps back to a big rock cairn and started again, looking really carefully. Then I saw the blaze to the left that I’d missed the first time around. 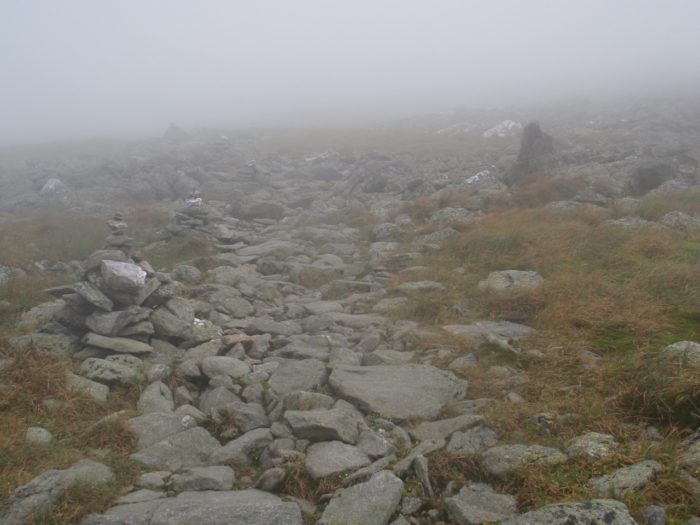 Lookouts and overlooks can be complicated with several side trails to viewpoints. Once in New York after signing a register on a peak and taking a photo or two, I went back down the mountain the way I’d come and it took me about a half mile to realize I was no longer northbound, after a guy with a little dog mentioned some pretty falls up ahead. Wait a minute – I’d seen those pretty falls already! When you’re at a summit, both trails go back downhill and it’s easy to get turned around after you stop to take pictures in lots of directions. Make a special point to note which way you’re going to continue before you start spinning around taking selfies.

4. Hiking poles are your direction-pointing friends!

When you stop for the night, to get water, or take a blue blaze side trail to the shelter, make a clear note which way you’ll head out in the morning. Orient yourself and picture yourself going down the proper trail. Woods look similar. Trees look similar. You can’t count on there being signs at the shelter or water source that remind you which way is north or south.

Basically I do the same thing I do when I park my car in a crowded mall parking lot – I look at what big stores are nearby then notice what entrance I go in, and if I go into a department store, what’s for sale right near the door I want to exit when I return to my car. In the woods, instead of cars and shoe displays, it’s unusual trees, rock formations, or anything else that helps.

When the AT crosses a road, the trail doesn’t always begin again directly across the road. Sometimes the trail goes back in the woods 50 yards up the road so you have to look around for the next blaze. Often there’s a false trail right across the road where a lot of people have started into the woods, leaving about a thirty-foot long trail that abruptly ends as people realize they’re not on the correct path and turn and back out. I probably saw at least a dozen of these on my thru hike and I’m sure there were more I never noticed.

Town can also be a tricky place to keep track of the trail as there are a lot of white markers on bridges and overpasses and telephone poles that aren’t actual AT blazes. As you hike you’ll get better and better at telling the difference.

7. Old roads in the woods

When you’re in the woods following an old road you can get in a rhythm and stop paying attention and miss the spot where the trail dips off the road and back into the woods. Keep watching for blazes any time you’re on an old road. A good rule of thumb is to avoid going more than three or four tenths of a mile without seeing a blaze – at least on the AT. If you’ve gone more than half a mile without seeing a blaze, it might be time to retrace your steps to the last known blaze.

When the trail goes through a cow pasture, you might find you’re still following a path but it’s not the trail, it’s the cow path! This happened to me on a sunny fall day in Virginia somewhere – there was a blaze on a rock that me and two hikers before me completely missed. I knew something was wrong when I was ducking through brambles to stay on the path, and thankfully way down the field I saw a hiking friend in his blaze orange hat calling to me to tell me I was off the trail. Three of us ended up getting sodas and cookies from a lovely woman at a nearby farmhouse, and we took a break in her grassy yard, stopped to gather chestnuts, and rejoined the trail a little farther up the road. Sometimes getting lost leads to happy treats! 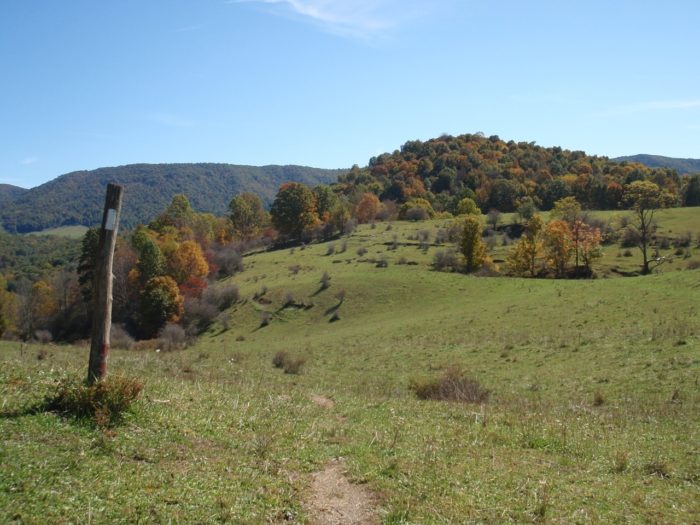 Not long after I took this gorgeous photo, I was turned around and following a cow trail! 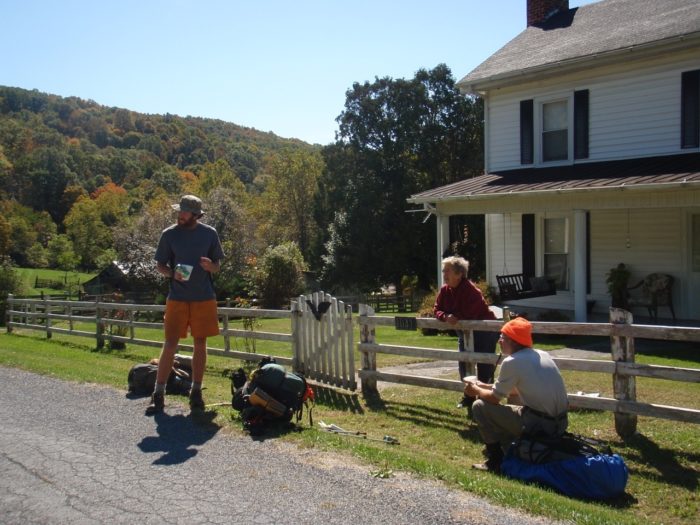 Getting lost in cow pastures can lead to trail magic sodas and cookies and a great conversation with a local!

You can’t follow footprints in rocky areas and if they’re above treeline, you’ll be following blazes painted directly on the rocks. Look ahead for the next blaze or rock cairn that marks the way, and in places like the Whites or the Smokies, remember that the AT isn’t the only trail, so keep checking that you are indeed on the correct trail. Carry a map that helps you see what other trails are intersecting or coinciding with the trail you mean to be hiking. 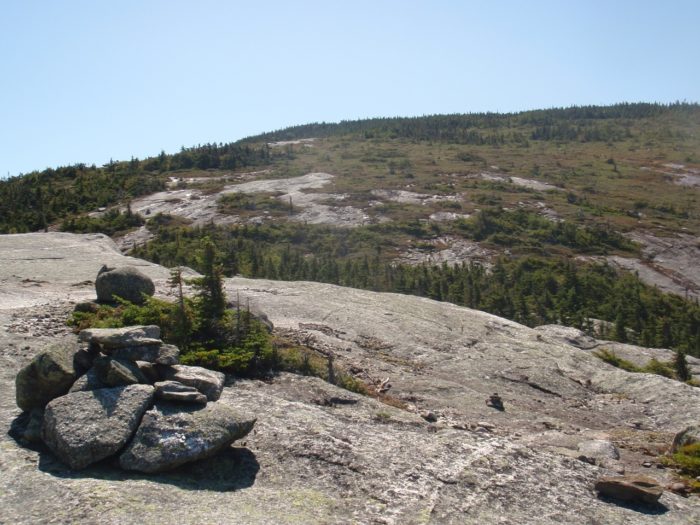 When the trail is one giant rock in Maine, it’s often marked with small piles of rocks.

The very first time I got “lost” on the AT I was still on it. I got freaked out by a bunch of blazes that had been painted over with black paint. It was my first week on the trail and I thought for sure I’d missed some turn and ended up on an old part of the trail that had been re-routed. I turned around and retraced my steps to a white blaze. Then as I re-walked the exact same trail again, I remembered that as a beautification effort, some trail maintenance crews had painted over white blazes where there were too many and they were interfering with the general beauty of the woods.  D’oh!

If the path starts to look dim, you’re likely no longer on the AT.

Conversely, a pretty sure giveaway that you’re still on the right trail are tons of pole-tip holes along the edge of the trail. Other trails populated solely by day hikers are less likely to have a row of holes breaking up the moss and leaves along the trailside, making little pockmarks in the mud.

The longer I was on the trail the more easily I could tell I was on the right path just by virtue of some footprints or disturbed moss. I got much better at anticipating when there would be a switchback or a turn in the trail. I could sense the route. And when I stopped for the night at a stealth camp, I could easily find my way back to the trail, turn the right way, and keep going. Follow these tips, pay attention and you too won’t have to worry about getting lost on the trail.

Note: Just in case, you should always carry a compass and map and have good direction and route finding skills. You probably won’t need them on the AT but in an emergency you’ll be glad you know what to do! On the PCT and CDT, compass and route-finding skills are a must.

I’m Carla (trail name Zipper) and I thru hiked the Appalachian Trail in 2009, almost entirely by myself. It was an incredible, empowering journey. Now, I've created a resource for women to gain support for their hikes through conversations with successful women hikers. I'm a life coach and I live in New Orleans. I love leading silent walks in the local wetlands and I make a pilgrimage to somewhere on the AT every year. https://www.wildandwhiteblazing.com/