Back to the Trail… the Hard Way

I’m official!  Turns out the ATC office in Harpers Ferry is even open on Easter Sunday.  It took an almost herculean effort to get there.  On Thursday morning I drove Stella to cousin Stuart’s house where she will be spoiled by his daughter, Emily. 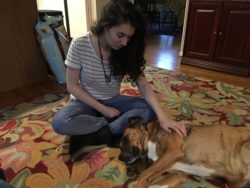 On Friday, I drove 6 hours back to Greensboro to take care of a few last minute details and to load my pack for the final time. I’m a huge believer in the Santa Claus method of packing…make a list; check it twice!  Since the train to Harpers Ferry was scheduled to leave at 3:44 am, I decided not go to sleep.  Took an Uber to the station arriving with plenty of time only to find the train would be two hours late!  Finally underway as the sun was coming up, I talked briefly to the guy sitting next me who was making his way home after spraining his ankle on the trail in Georgia.  I probably made him homesick for shelter life by falling asleep and snoring loudly enough to wake myself up.

The train pulled into D.C. two hours late.  I didn’t feel like I had enough time to hit the national mall, so I sat on a park bench across the street, read my book, watched the squirrels frolic in the sun and listen to the protesters screaming to see Trump’s taxes.

Through this whole journey, I worried that the ATC office wasn’t going to be open on Easter morning.  You see my daughter gave me a deadline for getting to Katahdin.  She’s due to deliver my second grandchild the end of July.  I just did the math and picked a date that would give me a good shot to get back in time never considering there may be other things to consider.  All my worrying was a waste of time; they opened on schedule in time to make me flip flop 51. 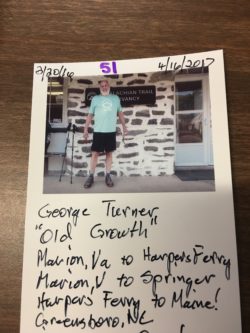 Might Actually End Up with a Trail Family This Time

While Harpers Ferry’s Flip Flop festival the weekend of the 21st, scads of folks started their hikes there with me on the 16th.  This has made this LASH a lot more social than those I took last year. Oneway and Foghat keep showing up. Oneway is fellow Trek blogger Gary Stell; Foghat is a retired doctor following in his son’s footsteps (his son completed a SOBO thru hike a few years ago).  I’ve run into several others more tha once…something that almost never happened last year.

A bunch of us sat at the Pine Grove store telling stories and laughing until the museum opened up, while proved that hiker hunger is real and I hiked onto the next shelter after lunch. That evening I talked to an interesting section hiker who was supplementing his food by foraging.  While I don’t think I have the focus or patience to do this myself, but I wish I knew more about it. 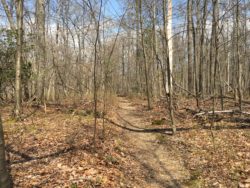 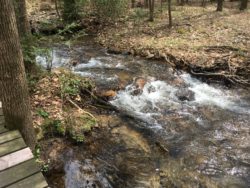 Stream near the Antietam shelter

Some of the shelters in Pennsylvania are almost over the top.  In addition to having both a snoring and non-snoring sections,Tumbling Run has a covered pavilion. Quarry Gap has a similar layout and stonework along the banks of the creek running in front of the shelter, landscaping and even a few concrete turtles. 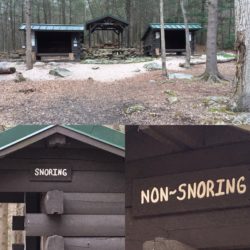 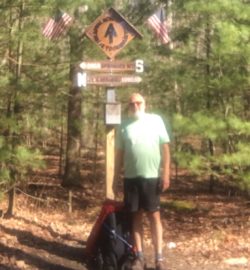 So I’m posting this from Boiling Springs. Tomorrow I’ll pick up my first maildrop and do a little shopping before hitting the trail again.  I’ve decided to take a nero (near zero) into Duncannon to take care of some chores and hold off until Port Clinton to take a zero. I’ll probably post my next update from there.