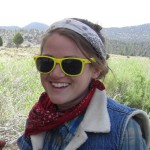 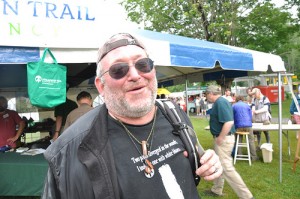 Folks, by this point I think we all know it’s true: the hiker community is tight. We’re all only 6 degrees of separation from Trail Legends like Miss Janet, Baltimore Jack or Bob Peoples. Hikers share a common (mal)function in the brain, a similar misfiring of neurons, and I am almost daily reminded of it.

Before I left Hot Springs, I was yard saling (read: had all my shit drying out on the lawn) in front of the Hiker Ridge Ministries building. A raggamuffin looking man approached the table where I was sitting with 5 other hikers and immediately began: “You guys are gonna want 5 days of food to get to Erwin. You’ll get there on the 6th day. Miss Janet is in Erwin right now. You can do laundry at her place. Her dauhter might be there. Do you have Miss Janet’s number?” Everyone readied their pen to take it down when someone boldly barked, “Yeah.” “O.. K.. well, make sure your friends have it,” the said mysterious man.

A hiker asked, “Is there a movie theater in Erwin?”

“Yes. People keep asking me that. You want to see the Avengers? What are you, nine!?” he replied. The Avengers fan turned his face away.

Another hiker asked, “Hey, did you hear about what’s going on in Baltimore?”

“I’m actually from Boston,” he said.

“Huh,” I thought. I’d heard of Baltimore Jack in 2011. I’d heard positive and negative things, but mostly that he’s on the Trail every year and some how I had often narrowly missed him.

“Where in Boston?” I asked, being a Masshole myself.

“Funny, my dad asked the same thing,” I smiled.

“Did you graduate?” he grilled.

“What does my ring say?” Baltimore Jack stuck out his bear-like paw and I narrowed my eyes on the large black and silver ring. My eyes aren’t used to reading smaller print, but finally they focused.

It was a Hampshire College class ring. “One of probably 5 in the world,” he boasted.

“Yeah, they don’t make those,” I said. They do make shirts with a football on them that read, “Undefeated since 1970,” but we don’t have a football team.

It all seems to add up. Was I looking at my future self? No. No way. But perhaps I was sitting at a table with multiple incarnations of a kind of being. My favorite kind. Sarcastic, silly, loveable. The kind of people I want to pack out wherever I go. The kind that tries to make an every day coincidence into some kind of philosophical event. And maybe, just maybe, every hiker has a hungry heart. In any case, I was astonished and excited, and dammit, I want a Hampshire College class ring!

I'm John Rambo, Jambo, TBird, or Tee, and for the past 4 years, I have been having a contemptuous affair - with backpacking. In 2011, I was accosted by the fat face of failure while attempting an Appalachian Trail thru-hike. Cold and alone, I returned to my home state of Massachusetts, finished my degree in History at Hampshire College, and brooded about what could have been. In April 2014, I reemerged, this time on the Pacific Crest Trail. Defiantly, I completed a continuous footpath on the west coast counterpart of the AT. Yet here I am again, on the east coast. And I say: HEY! Appalachian Trail! I'm callin' you out! 2015 will be the year my feet crumble the Trail that once crushed me. I invite you to follow along as I put this east coast rivalry, the AT vs. Tee, to bed.